If you like modern Ferraris, then thank the Acura NSX

Join the Conversation (0)
What kind of 17-year-old Honda sells for more than $200,000? At well above the original sticker price, that’s what you’ll have a to pay today for a low-kilometre 2005 Acura NSX. Why? Limited production (they are scarce), pure driving enjoyment and visceral sensation that’s next to impossible to find in newer cars.

As such, this two-seater has earned the distinction of being one of the greatest sports cars in history and has also been major influence on many high-performance vehicles that followed it.

About 18,000 NSXs were sold around the world between the fall of the 1990 and 2005, with about half of that production going to North America.

Roll the clocks back to the mid 1980s when Honda — Acura’s parent company — set out to create an image vehicle that reflected its blossoming technical prowess in Formula One racing. It was a culmination of pretty much everything the company had learned to that point about engineering and construction.

How? The cornerstone of the project was weight: the less of it the better. A strict diet gave the car quick steering and chassis response. Within that framework, Honda chose a high-revving, high-horsepower V-6.

Keeping the weight down meant bucking convention when it came to the use of metals. Because the chassis would be of the monocoque variety (no frame, but an integrated structure that included the roof), non-structural polymers and fibreglass were out of the question. Instead, engineers developed a special high-strength aluminum alloy for the internal structure and all the body panels. Even the suspension parts were made from aluminum.

Through space-age engineering and the use of supercomputers, the resulting chassis weighed just 452 pounds (205 kilograms), about 40 per cent less than a comparable steel chassis and just as strong. Special attention was paid to the door sills, which when cut apart showed an intricate internal webbing designed to increase rigidity.

In the process of crafting the NSX, Honda established 400 new patents and enlisted then-Formula One champion Ayrton Senna, who was driving a Honda-powered McLaren racer, to evaluate the new car. 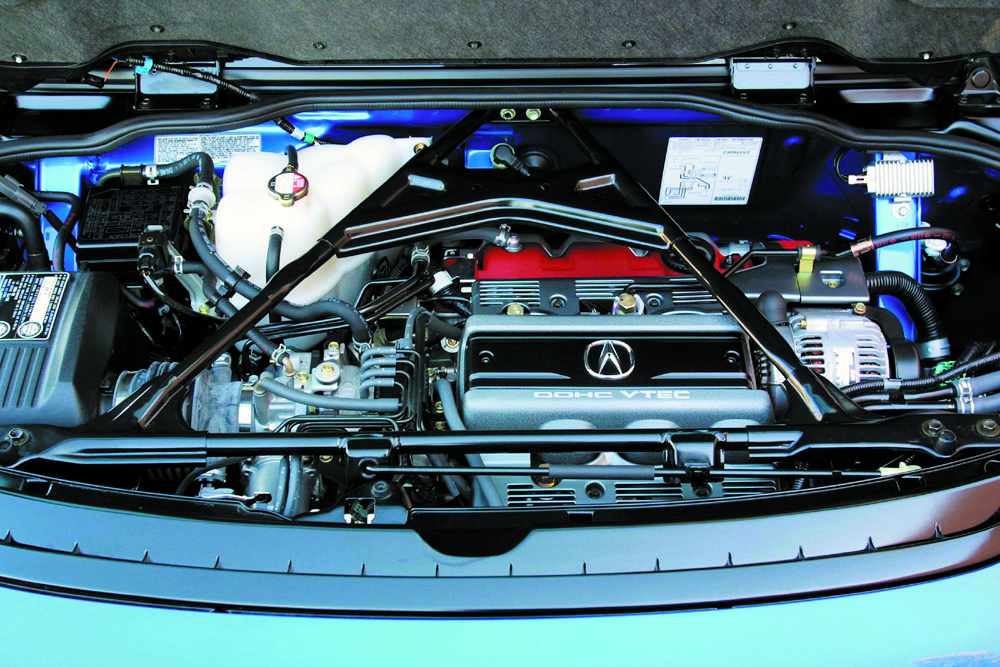 Like the comparable Ferrari, the NSX’s powerplant was slotted behind the passenger compartment and in front of the rear wheels. In the NSX’s case, the V-6 was mounted sideways and was connected to the driver via a five-speed manual transaxle. There was also a four-speed-automatic option.

Compared with Ferrari’s cantankerous shifter, the NSX’s gearbox was butter smooth and quick. The V-6 was brought to 270 horsepower with first production use of Honda’s VTEC variable valve timing that increased the top-end horsepower and rev range. VTEC kicked in at about 5,000 rpm, just when other domestic vehicles were gasping for an upshift. You had to be quick with the shifter in first gear as the engine howled its way to 8,000 revs in a heartbeat. Holding it together were six titanium connecting rods, deemed necessary for such engine speeds.

The true beauty of the car was its ability to make anyone feel like they could lead the Formula One pack. The ergonomics were superb, and occupants were treated to tautly drawn leather seats, Bose stereo and climate control, all the while enjoying a panoramic view from the F-16-fighter-jet-inspired cockpit.

A little-known fact is that every NSX was hand-built in a factory especially constructed for the car. Each NSX was painstakingly pieced together by the 200 elite workers who were required to have a minimum 10-years assembly experience. Even the leather interior was hand sewn.

The NSX was also one of a few vehicles at the time to have different diameter wheels in the front and back. Forged aluminum blocks — called billets — were milled into lightweight 15-inch wheels for the front and 16 inchers for the rear. Yokohama was contracted to supply a tire that was unique to the NSX and its performance characteristics. Dubbed the AO22, the tires wore out quickly, but stuck like glue. During the two-year development period, Yokohama produced and rejected 10 separate molds and used more than 6,000 test tires in more than 100 different formulations of compound and construction before going with the AO22.

And there it was. The new performance benchmark. NSXs sold in Japan and Europe were badged as Hondas, while North American versions wore the Acura label.

Ferrari, in particular, pulled up its socks after the NSX arrived, finally creating a worthy adversary with the 360 Modena, although maintenance costs and reliability were lessons that were either unlearned, ignored or unattainable.

Interestingly, the NSX changed very little over the years. In its final incarnation, it sported integrated headlight pods, slightly larger wheels, a six-speed manual transmission and 290 horsepower from an updated and larger 3.2-litre V-6.

Acura waited more than a decade to build a successor to the first NSX, although as good as the new car is it just didn’t break new ground like the original. And when the creator has a hard time one-upping itself, you come to understand just how good the original really was.

Are you proud of your ride? Send us a photo of you and your vehicle, along with a line or two about it, and Wheels may include it in a photo roundup during the Victoria Day long weekend. Be sure to include your name and where you live. Submissions can be emailed to wheels@thestar.ca.