Does The GR Corolla Live Up To The Hype?

And should you be willing to pay over MSRP?

Join the Conversation (0)
Everything you’ve read or heard about the 2023 Toyota GR Corolla is true.

Which is weird. Because in today’s digital world of extreme hyperbole, tribalism and prioritization of personal preference over objective truth — the instances in which anything is ever everything everyone is saying it is are seldom.

“The best ever” and “the worst ever” are terms thrown around with such reckless abandon in an effort to generate clicks, views, and fleeting dopamine that we’ve killed the very concept of nuance. It’s been replaced with willful bias.

This lack of nuance and objective analysis is all over the car world. Enthusiasts so often boil things down to a simple good or bad paradigm that we often miss out on truly good products.

For example, I was so thoroughly underwhelmed by the new Nissan Z that I actually forgot I drove it. It wasn’t the experience I wanted from the Z, but it's the one I got. And now I simply can’t imagine why any person would buy one over a Camaro SS or GR Supra. But because the GR Supra commits the superficially unforgivable sin of being born of a partnership with BMW, there are still those who claim to adore the Nissan Z — despite it losing every comparison test.

The Internet decided the Z was a winner and the GR Supra was a loser before they had even hit the market — before anybody had driven either of them. For certain parts of the community, that’s their reality. Ours be damned.

The GR Corolla’s narrative was also written almost immediately following its announcement, albeit in a much more favorable light. Minds were made up before anyone had even turned the ignition over — this was going to be a great car. 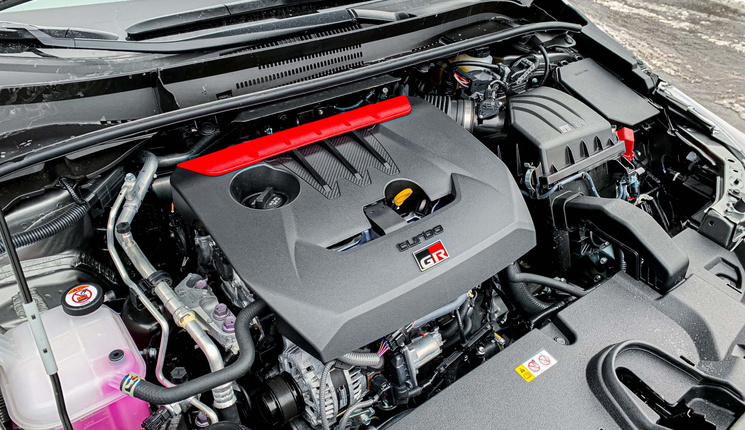 You know the specs by now. 300 horsepower produced by an incredibly compact 1.6-litre, turbocharged 3-cylinder engine. Outside of Toyota developing the car all on their own, this unique power plant really was the source of the initial hype. The engine is the same racing-inspired G16E-GTS unit present in the GR Yaris — which was notably never available in North America.

Outside, the GR Corolla differentiates itself with widened fender flares, signature GR rims, hood vents, a gaping front facia channeling air to the intercooler, and three separate exhaust exits (one for each engine cylinder).

Inside are a variety of GR badges, including on the steering wheel. Also present are race-inspired seats — which are incidentally very well bolstered while maintaining a reasonable level of comfort — and a leather-wrapped shift knob. 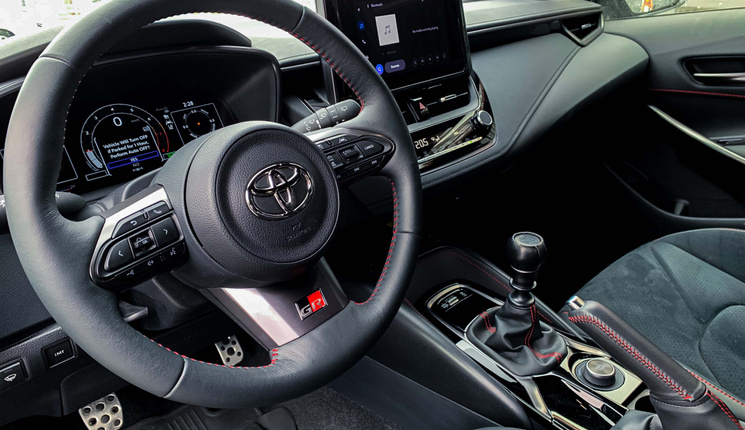 The rest of the interior is very much “just a Corolla” — like any rental car or cab you’ve ever been in. However, the GR Corolla is not assembled alongside its standard counterpart and is instead produced alongside the GR Yaris at the "GR Factory" inside Toyota's Motomachi plant, where the assembly process is more of a hands-on affair.

So the hype in this case was totally understandable. It’s difficult to not read the above and start licking your chops with dreams of corner-carving hot hatch glory for a price you could actually afford.

Not to mention the previously forbidden fruit element adding fuel to the hype fire. For a generation raised on limited-quantity sneaker and hoodie drops, this couldn't have been a more perfect storm.

Happily, in this case, the hype is justified. Because the GR Corolla is truly a great car to drive fast. And by “great” I mean, “one of the all-time greats”.

Carving up a back road in the GR Corolla is pure, unadulterated driving bliss. The car rotates like magic. There’s no nose dive. No tricky back end. It’s just point and shoot, “take the corner as fast as you can” goodness. All thrills. No chills. And lots of turbo noises. 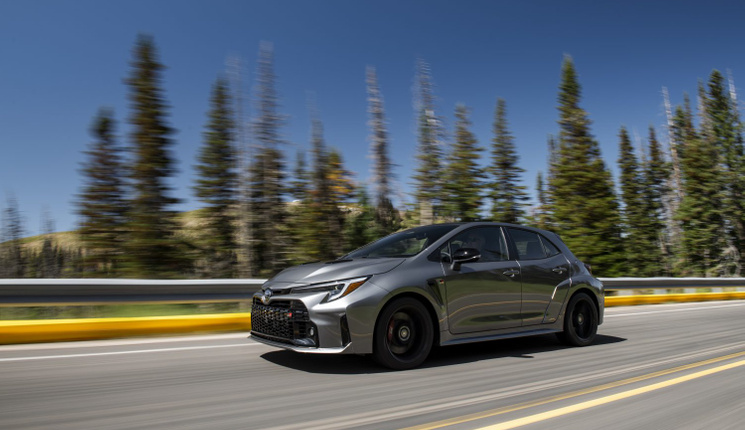 The car makes you feel like an absolute hero. And that’s where the GR Corolla edges out competitors like the Honda Civic Type R.

Both cars are very fun and rewarding. Both imbue you with underserved levels of confidence. But the Type R feels sort of like a performance-enhancing drug to drive fast. It always feels like it’s making you a better driver than you are. And you’re always vaguely aware of that. The GR Corolla feels more one-to-one — like you’re bringing the car to its limits, not the other way around.

300 horsepower feels like a magic number for the little Corolla. With 0 - 100km/h times in the mid 5-second range, it certainly won’t make your life flash before your eyes. But it’s more than quick enough in the real world, and best of all, you can floor it everywhere.

Toyota’s big win with the GR Corolla is successfully capturing what’s so special about the 86 — the opportunity and ability to actually explore the upper limits of a sports car — and bringing that to the Corolla platform.

Hand on my heart, I had more fun in a 300-horsepower Corolla hatchback than I did in an 800-horsepower Dodge Challenger. Sure, the Corolla didn’t make me feel like I was Major Kong riding the atom bomb at the end of Dr. Strangelove. But it also didn’t tire me out. I didn’t have to worry about accidentally waking the grizzly bear and being mauled to death. I also didn’t have to look for places and opportunities to let the beast loose. You don’t have to plan anything in the GR Corolla — you can just go have fun anywhere.

Are these two cars comparable products in any way? No. But “fun” is a universal measurement when it comes to customer satisfaction.

And while all the talk is about the quirky 3-cylinder powerplant, it pales in comparison to just how damn good the transmission is. The clutch is feather-light. Butter wishes it was as smooth as the action on the gear selector. Nailing crisp, clean shifts is as easy and satisfying as sipping a fine scotch or laying in a hot bath. The GR Corolla needs to be in the manual transmission hall of fame. The GR Corolla feels so good to shift, you’d swear the transmission was less engineered and more manifested as a result of someone selling their soul.

But perhaps best of all — and a clear advantage over the GR 86 — is that because it's a Corolla, it's easy to live with. My tester sliced through Toronto rush hour traffic, was a breeze in parking garages, did grocery runs no problem. Hell, it was even fuel efficient. Even after extreme misbehaving in the car, I averaged under 10L/100km. 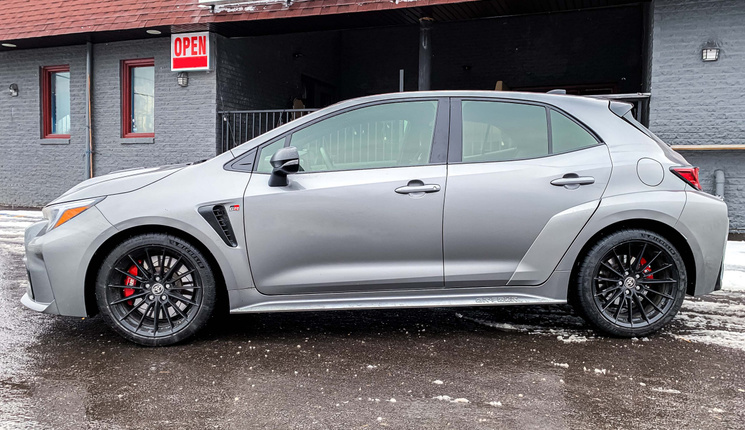 This was another one of those cars that made me think, “Wait. Why do I own a Mustang, again?”

Because the truth is the GR Corolla is more fun, more dynamic and more rewarding than my V8 Mustang, despite having five fewer cylinders and 120 less horsepower — in addition to being more convenient, more practical, and more economical.

So, based on my experience with the car, I think the hype around the GR Corolla is justified and journalists really are not exaggerating when they go on about how damn good this thing is to drive. I mean, I am one and I just did.

However, there is a problem. Because part of the hype was born from the point that the GR Corolla was supposed to be a car you could actually afford.

The base “Core” model starts at almost $49,000 and while yes, everything is expensive nowadays, that price really is pushing it. Because other than the way it drives, nothing in the GR Corolla feels like a $50,000 car.

90 per cent of the interior, for example, looks and feels like any old rental Corolla. And it all has that nasty, cheap Toyota plastic-y smell — sort of like a fresh garbage bag. I know you know what I mean.

Then there’s the lack of sound deadening in the car. Noise, vibration and harshness are prevalent. To say the least. Driving the car on the highway is like being under an artillery barrage.

Yes, some of the charm of the car is that it feels like you’re driving somebody’s tuner project — like somebody just took a regular Corolla and added a turbo and racing seats. But asking $50,000 to start just feels like a really steep ask. 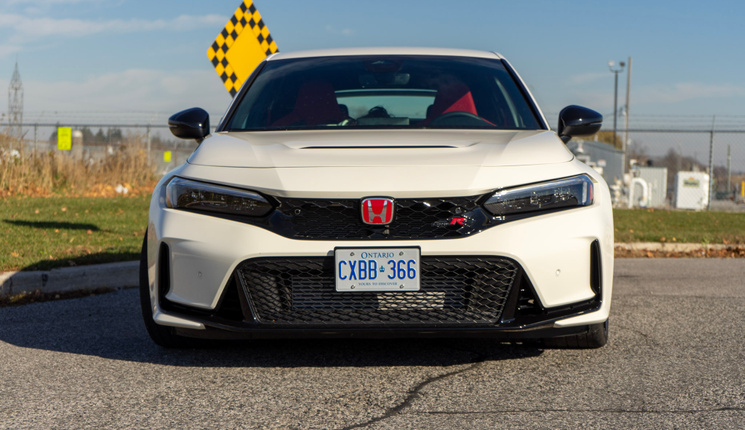 While the latest Type R might lose a drag race to the GR Corolla, if I was going to shell out this kind of money for a fresh hot hatch, I’d still have the Type R hands down. It offers almost all of the same driving bliss and reward as the GR Corolla, while having an interior and driver comforts you can at least trick yourself into believing might be worth $60,000 out the door.

Then there’s the elephant in the room. The real cost of hype. Dealer markup.

There are already horror stories of the GR Corolla being marked up $20,000 over sticker. And it should go without saying that paying $70,000 or more for any Toyota Corolla on the planet should require you to take a test for actual donkey brains.

So, yes, the GR Corolla really is one of the all-time great hot-hatches and sincerely one of the most fun and rewarding cars I’ve ever driven. But you’d be an absolute fool to pay a penny over sticker for it.

And dollar for dollar, the Type R is still the better buy.