Taylor’s new paint job is a job painting — creating artwork meant to strike a chord with someone who has a tight connection to a vehicle.

Join the Conversation (0)
At first glance, the painting appears to be of a woman with her back turned, standing up to her knees in inky-blue water. There’s a sensual energy to the image – is she taking off her shirt? The longer you look at it, however, the more details emerge, and you realize within the swells of water are the iconic body lines of a car. A Porsche, no less.

This is not your dad’s car art.

The artist is Sacha Taylor, and the piece is from her March collection of luxury automotive art. Taylor, who works out of a small studio within her Mississauga condo, creates original and bespoke pieces of art featuring beloved vehicles. Clients come to her with photos and backstories of the cars, trucks and motorcycles that have shaped their lives, looking for a piece of art more enduring and imaginative than a car pinup. 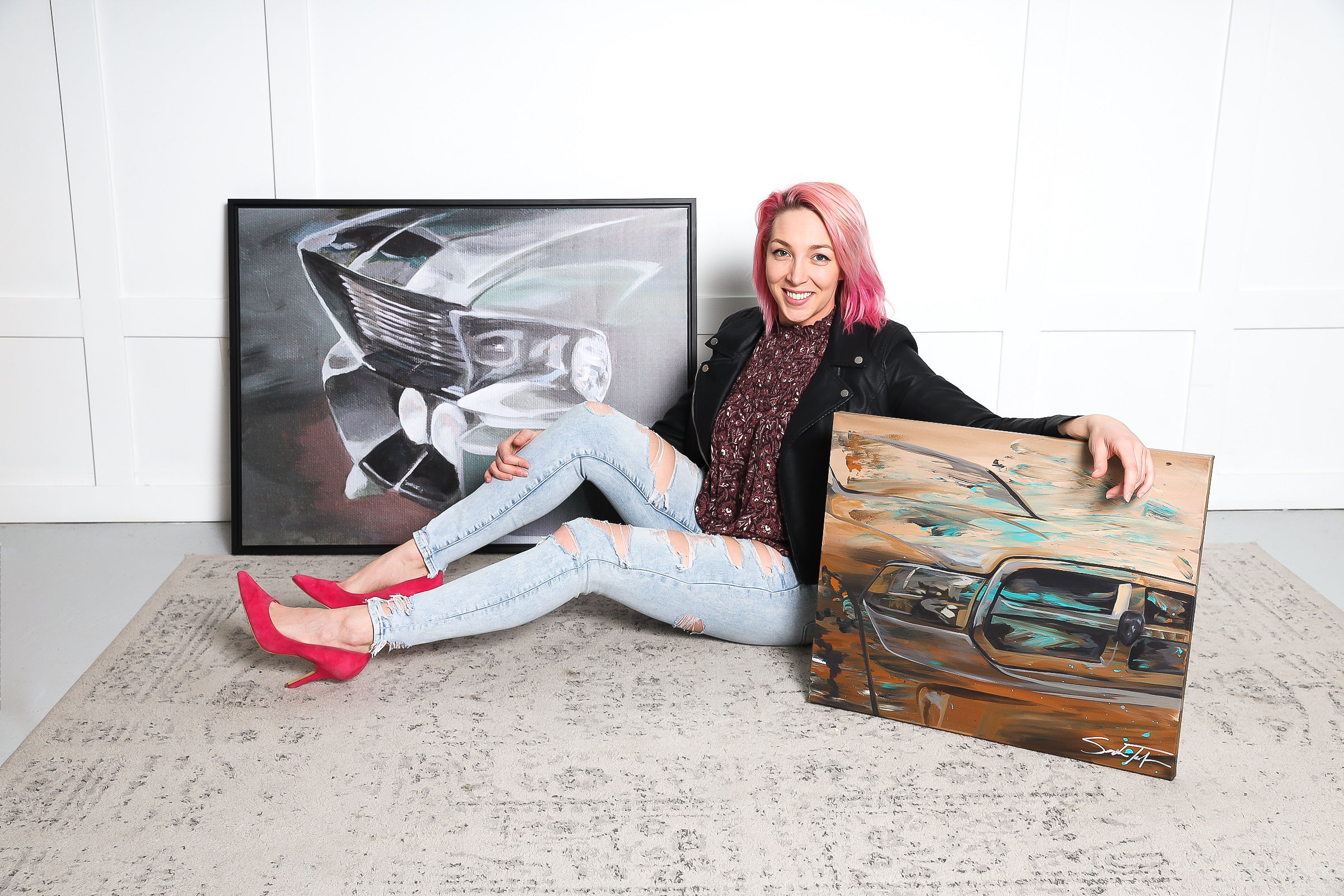 “It's a unique type of automotive artwork,” said Taylor of her paintings. “Usually when people draw or paint a car, it looks exactly like the photo. And that can be impressive. But for me, I wouldn’t hang it in my living room.”

It was Taylor’s own search for meaningful wall art (“something badass,” she said) that inspired her idea for Taylor Art Garage. She launched the business in the summer of 2020 despite not having any formal training. “I was not an artist before I started my art business,” she said. “I actually bought my website before I ever put brush to canvas.”

This approach is very on-brand for Taylor: See an opportunity, seize it. It’s how she broke into the automotive industry. Until a few years ago, Taylor didn’t know much about cars, either. During long, boring commutes to a former job, she had started paying attention to the vehicles around her, noticing subtle design differences. She became determined to learn more and started insinuating herself into the industry by attending local car meets. “I really feel like I snuck in the back door of the car world,” said Taylor. “Nobody knew I didn't know anything.” 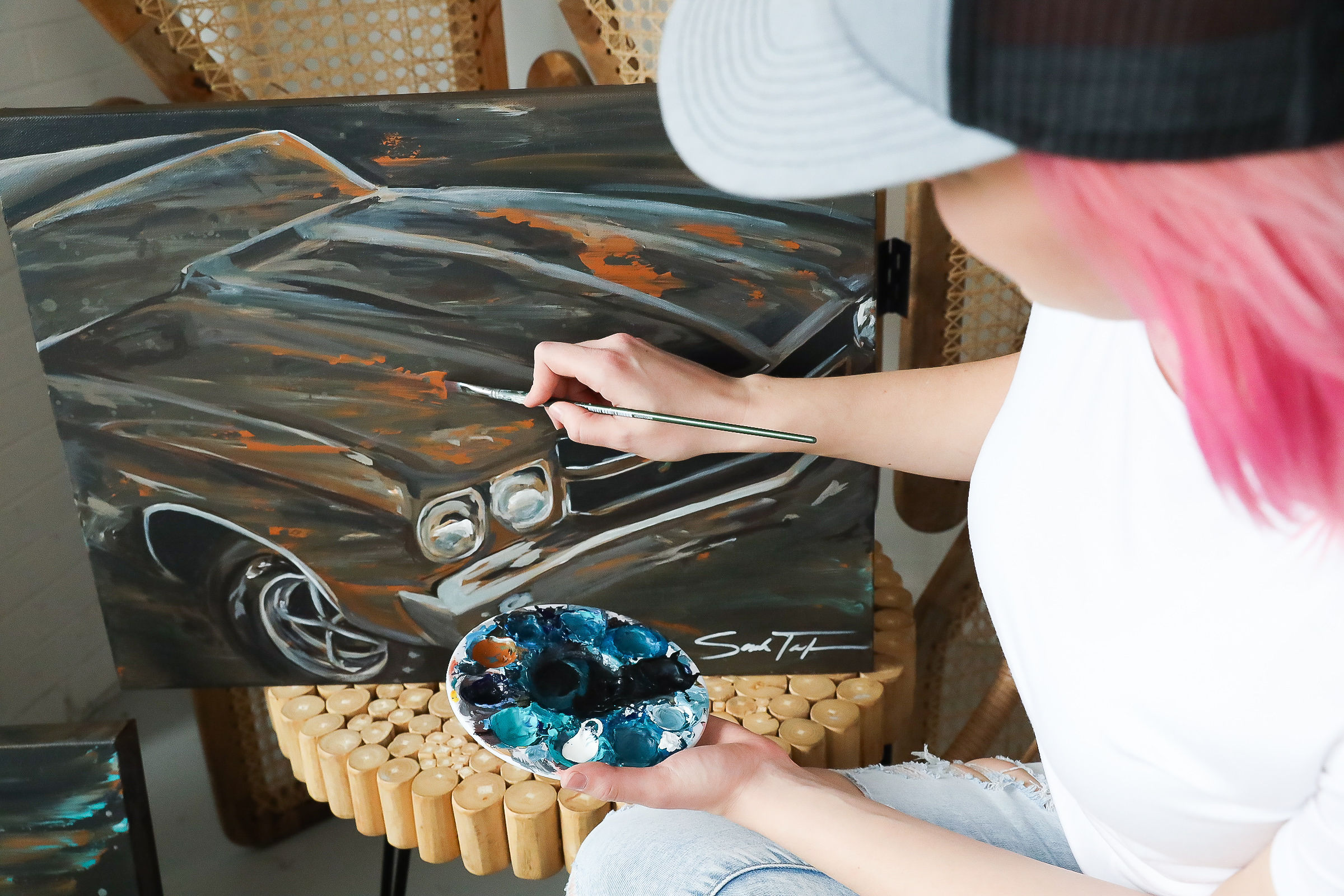 The confidence Taylor gained learning about engines, chassis and transmissions fuelled her courage to break into the industry as an artist. Having worked as a contractor, she loved building and working with her hands, and painting felt like a natural progression of her creative evolution. And with a background in sales, she felt she was ready to strike out on her own.

In August of last year, almost exactly a year after launching Taylor Art Garage, the 29-year-old quit her day job in manufacturing sales to focus on her business full time.

Taylor’s first commissioned piece was not of a car, but a motorcycle. A woman who contacted her wanted a painting for her boyfriend of Italian racer Valentino Rossi’s bike. Taylor laughed out loud when she received the photo. “It had logos everywhere,” she said. “It was super bright and colourful with a lot going on. I'd been painting only simple stuff up to that point. But I thought, ‘Okay, let's do this.’ I’ve always been up for a challenge.”

This client was typical for many of Taylor’s early commissions: women looking for decor-style automotive artwork for their boyfriends, husbands and dads. But as word got out and Taylor’s inventory of artwork expanded, car aficionados themselves started seeking her out.

She said a big part of her role is to collaborate with clients in creating a piece that captures the essence of the vehicle. “I try and pull information out of them,” said Taylor. “Even people who think they don't know anything about artwork, or don't think they care about colours, once you start talking, it turns out they have a lot of opinions about what they want in their living room, kitchen or home office.”

Taylor said she finds learning about people’s connections to the vehicles they want immortalized a joy. One memorable client asked for a painting of a 1928 Ford two-door he and his dad had built together from scratch years earlier. “He wanted it as a Father’s Day gift for his dad,” Taylor said. “And what was absolutely amazing is that while working on that project, both he and his dad got sober.”

Because she launched her business during the pandemic, much of Taylor’s interactions with clients and industry insiders have been virtual. This spring, she’s looking forward to making connections in person as she takes her work on the road for the first time at events such as Motorama and the Driven Aftermarket Car Show. “I was looking at my schedule over the next six months, and it's going to be madness. But I'm so excited about it,” she said.

“In the last two-and-a-bit years I've been doing this, it's really been a nonstop learning curve,” said Taylor. “As a solopreneur, my business is the biggest mirror of myself, and it's been fantastic.”

Cars are for girls

Inspired by her own experience as a woman breaking into the automotive world, Taylor launched a 10-episode podcast last summer called “Cars are for Girls.” Taylor’s said her goal was to provide an entry point for other women, or anyone, interested in better understanding their own vehicles. “There’s a ton of great information out there, but so much of it assumes a baseline of knowledge a lot of people just don’t have,” Taylor said. “I wanted to bridge that gap.”

With episodes such as “The Ways Car Salespeople Lie to You: Fibs, Fraud and Botox” and “What’s Horsepower and Who are you Picking for Mario Kart,” Taylor’s podcast is an extension of herself – fresh, fun and “free of mansplaining.”