Article was updated 5 days ago

With the possibility of possessing a driver’s license so rapidly approaching, cars had begun to take priority in my imagination. Specifically, Mustangs were my gateway drug and whether I knew it or not at the time, I had been hooked at an early age.

My mom had a 1986 Mustang when I was a toddler. After parting with it, she often daydreamed out loud of owning a 1967 convertible. We would sometimes go to the local “cruise night” to appreciate first-generation Mustangs — my mother putting the idea in my head…

Mom was of course brainwashing me. I blame her directly for believing that owning a Mustang is a life aspiration and symbol of fulfillment. Whatever. Could be worse.

Emerging into my early teens, I distinctly remember being enamored with the 2003 Mustang Cobra “Terminator” at that year’s Toronto auto show. I wanted as many models and posters of it as I could get. Movies like Bullitt and Gone In 60 Seconds helped to burn the Mustang’s distinct fastback silhouette into my soft, pubescent brain.

So when 14-year-old me spied my first S197 Mustang — a silver hardtop GT — out of the school bus window on the ride home from school (grotesquely picturesque, I know, but I’ll swear to every word), I became obsessed with the idea of having one. This is an obsession I have yet to let go of. And I suspect I never will.

We feel everything more intensely when we’re teenagers. Raging hormones, heightened emotions and developing brains tend to hardwire our teenage preferences into us for life — like writing in soft cement before it dries. It’s why everybody thinks all music was better when they were a teenager and that the kids today have shit music.

I could sit here and tell you that I like the S197 better than a modern S550 because of its “retro” styling. I could make a half-hearted, bad faith argument that the S197 is more faithful to the spirit of the Mustang, that it’s a more striking and uniquely styled car than the current generation. The truth is I like the S197 because of nostalgia.

In summer 2005, my mom finally bought her convertible Mustang — not a classic ‘67, but a brand new, black, ‘05 convertible. The classic styling cues (read, “nostalgia bait”) of the then new S197 were enough to satisfy her own childhood dream of owning a first generation Mustang. Undoubtedly, my mother was the target market Ford had in mind at the time. But I wonder if they knew they were indoctrinating me as well.

I have a lot of fond memories of that black ‘05 Mustang. I learned to drive in that car. I went on dates in that car. When my mother moved to British Columbia, I drove that car from Toronto to Vancouver for her — an epic and unforgettable road trip through some of the most beautiful parts of North America.

But that car was only a V6. It was also an automatic. And I’ve never been crazy about convertibles. I remember that summer day in 2005 when she picked out her Mustang at the Ford dealership — sitting beside it was a hardtop, manual, V8-powered GT, also in black. That was the one I really wanted. That was the one I was determined I would eventually own. 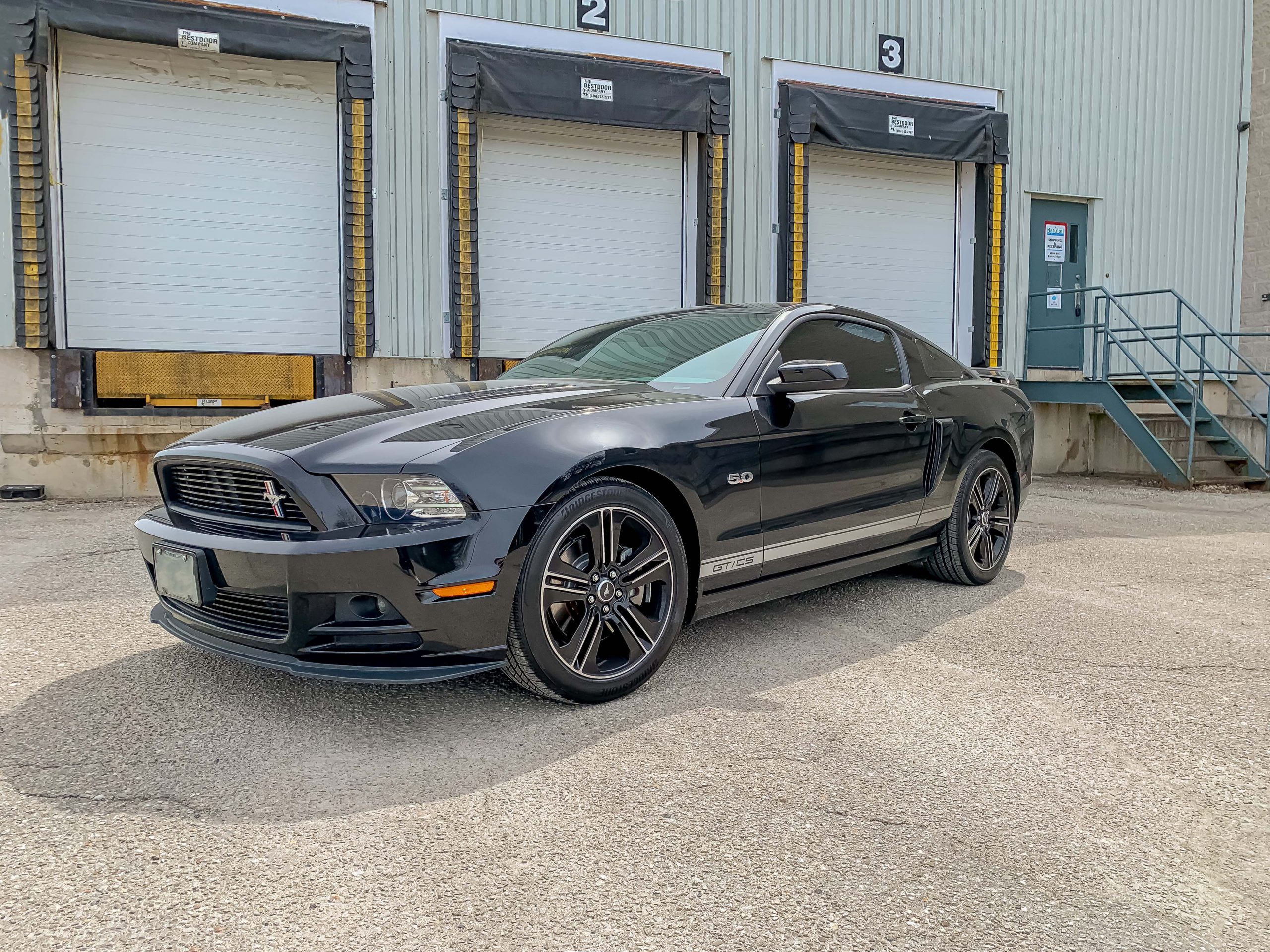 This year I finally had the means to purchase a Mustang GT. And if I’m honest, my initial instinct was to go with a newer S550 Mustang GT. Because I know, objectively, that they’re great cars.

But between inflation, dealer markup, and the realization that I simply won’t use a sports car all that often (I live in downtown Toronto, don’t commute, have access to press cars and would certainly not be driving my Mustang in poor-weather months) the idea of spending an arm and a leg for a new Mustang grew less and less appealing as time went by.

Then I found a listing for a 2014 Mustang GT/CS. A hardtop. In black. With a six-speed manual. With less than 40,000 km on the odometer. This was the last year that Ford ever produced the S197 chassis. And it had the right engine. And the right options. And a clutch…

Nostalgia took hold. My objectivity was suspended. I bought the car.

Besides spending what felt like an uncomfortable amount of money, the car has many inherent flaws (which are outside the bumps, bruises and other cosmetic imperfections I’m now weighing the benefits of correcting).

The car handles like a tractor. The 5.0-litre V8, while generally rev-happy, is a big, fat lump of American pig iron slung over the front axle. You feel every bit of that weight whilst plowing the Mustang’s bulbous nose around corners.

The live rear axle hops around the road and since there’s some camber to the wheels, the car will track on uneven surfaces. Traction control is a joke. This Mustang has busier hips than a pole dancer and this would all be fine… if the steering wasn’t as numb as a freshly powdered nose. There’s more feedback in a video game controller. 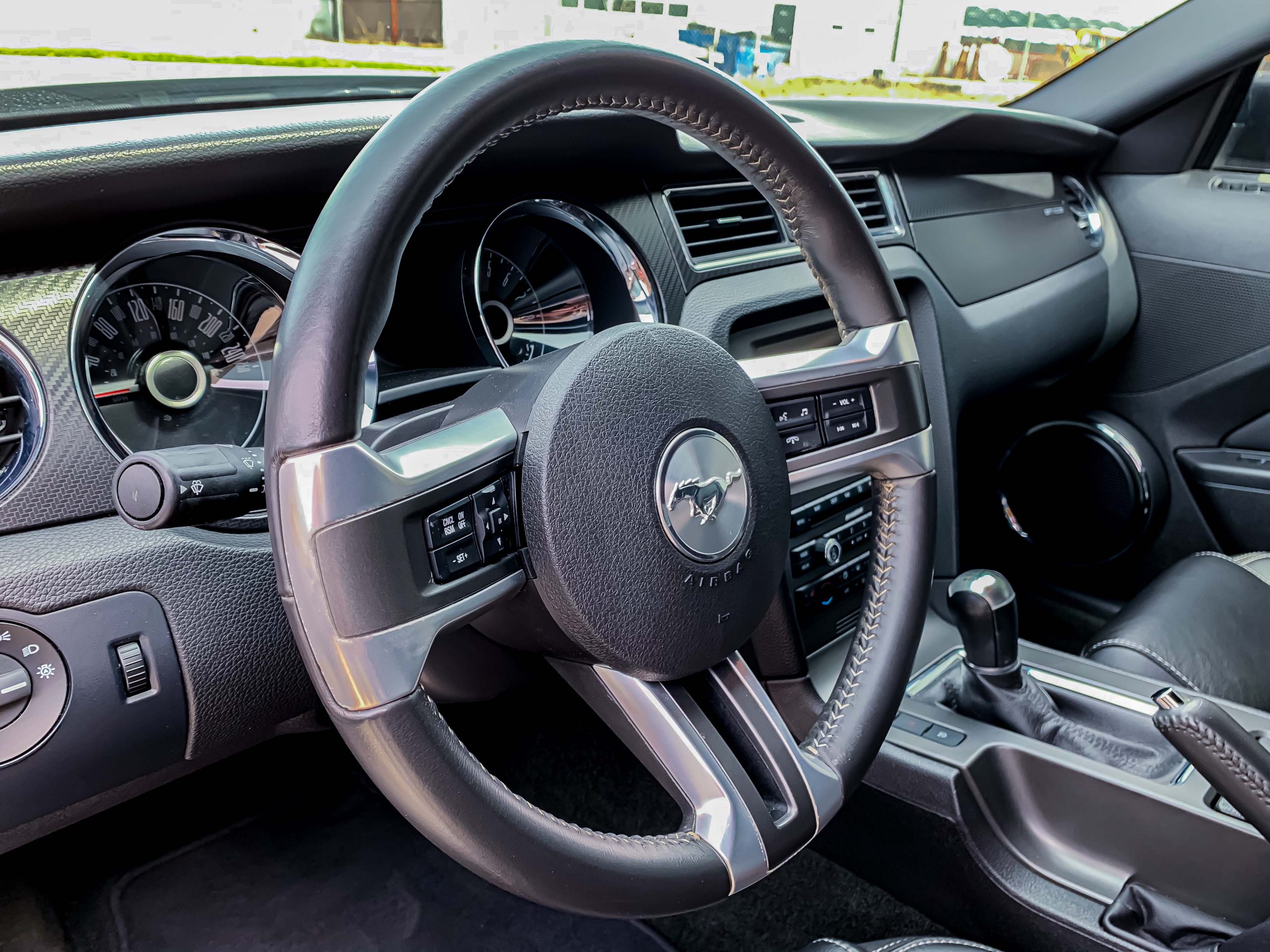 The action on the gear selector makes the car feel like a pick up truck. The interior quality is hilariously hideous — even with the top trim “California Special” package. And the thing drinks fuel like it’s doing a keg stand.

Also driving a stick if you live downtown will get annoying at some point. I don't care who you are or what kind of insecurities you’re about to project into the comments section. Any living person who has been stuck in traffic on a 400 series highway or in the downtown core, whilst driving stick, has yearned for the sweet embrace of sawing off their own left leg. Any “cool person” who tells you otherwise is lying.

So my Mustang is inconvenient, uneconomical, aesthetically imperfect and lacks genuine merit as a sports car.

This big dumb lump of metal is absolutely everything I wanted it to be when I was a teenager and driving it puts me into a state of peak happiness.

First, this Mustang is wonderfully analog. Which is something I can’t say about an S550… or really any modern car.

Get this. To start the car, you have to depress the clutch and turn an actual key. Ancient technology, I know. But between push-button starts and electric cars, I had actually forgotten how satisfying it is to feel like you’re the one breathing life into a grumpy, lumpy, burbeling V8.

There’s no “Sport Mode”. Your right foot is “Sport Mode”. The live-rear-end reminds you that your actions have consequences. And every time you clunk the clumsy shifter into gear, you’re reminded that your body is currently connected to the engine…to the wheels… to the road. 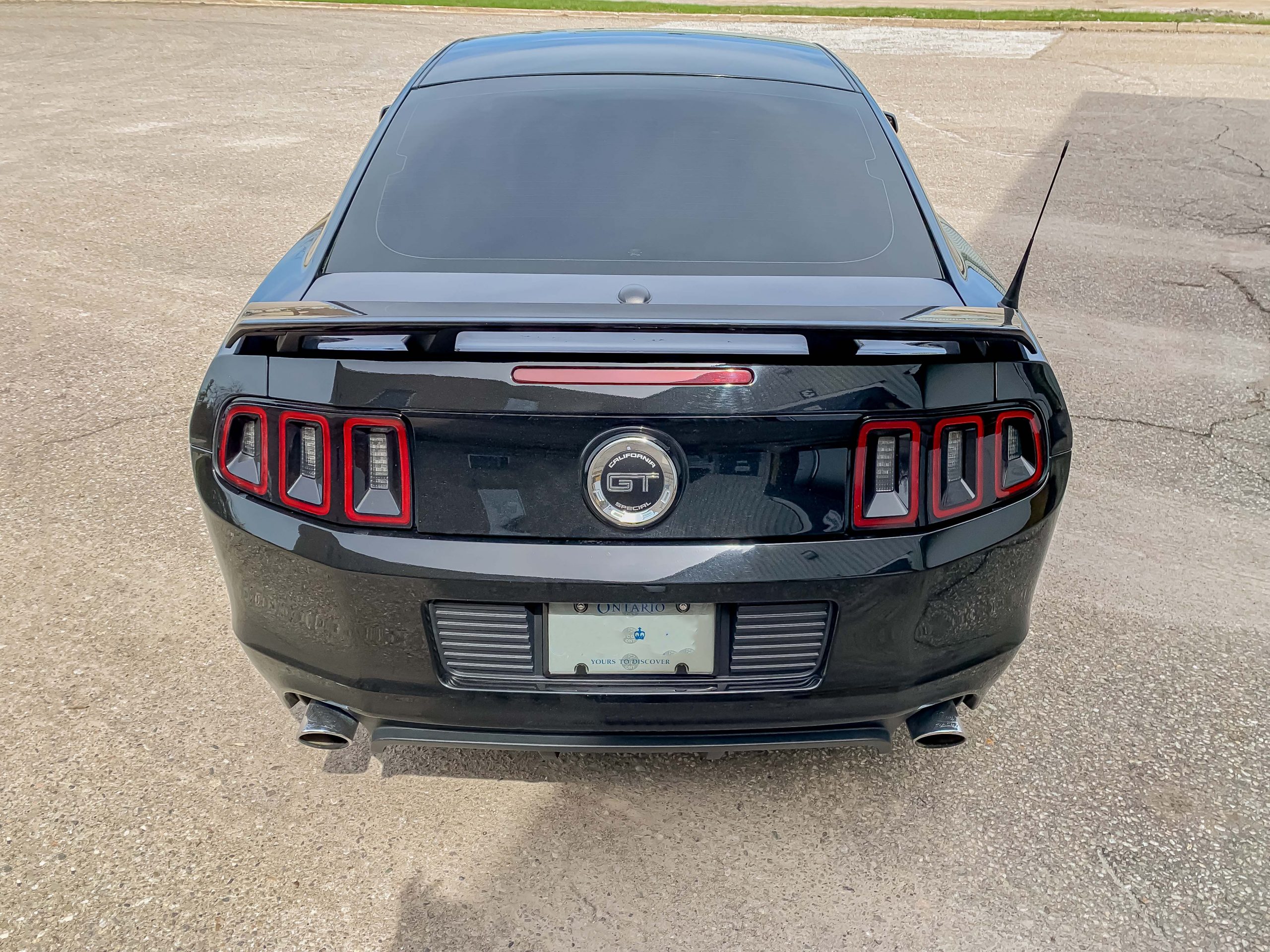 But there is a certain kind of thrill and pleasure to dropping the hammer on that (mostly) same 5.0-litre V8, catching the rear-end as power to the live rear-axle forces the car sideways and kicking the clutch as you row through gears — the angry bellow of the Coyote engine ushering you down the road is an event which is best described as “casually violent.”

That balance of danger, power and the need for control make the car feel special in a way that very few new cars do.

And in the same way the opportunities I’ve had to drive amazing new sports cars have highlighted the S197 Mustang GT’s many flaws (upon my first drive in my “new” car, I thought, “Oh, this is why journalists always thought these were junk. Because they are!”) — driving my Mustang reminds me just how engaging and involved and fun for the sake of fun enthusiast cars used to be before manufacturers started chasing lap times and letting computers sort mostly everything out for you.

Sure it has Bluetooth connectivity and navigation and a button which says “traction control” on it (I’m convinced it’s connected to nothing). 2014 wasn’t the stone age. But everything else reminds me of what I initially found so appealing about cars in the first place. Engagement. Bravado. Personality. Stimulation. Reward.

Am I seeing all of this through the lens of nostalgia, personal taste and a thick coating of uncontrollable bias? You bet.

I’m not trying to say you should buy an S197 Mustang. For the same reasons I don’t think I could recruit any new Alexisonfire fans (seriously, 2004 ruled so hard). You have your own imprints that are written into your once wet, long since dried, cement.

I’m also not trying to make a case that cars need to devolve. They won’t. They can’t. They shouldn’t.

What I am telling you is, despite the reality of owning your teenage dream car — the sticker price, the upkeep, the objective imperfections, the leaps and bounds in performance with which modern cars present you — you should buy it anyway.

Because nothing will ever be as good as the thing you convinced yourself was great as a teenager.