After shocking Detroit by driving around in a carriage with no horse pulling it, he predicted that one day horses would be obsolete

But few knew he was the first person to design, build and drive a car on the streets of old Detroit. He was one of the most technically knowledgeable pioneers of the early automotive industry and one of a handful of men who could envision the car transforming life in a city that would be known for cars.

Maybe that’s the greatest secret of King: Had he not visited Chicago, Ill., then moved to Detroit, it might never have become the Motor City.

In a way, it was a miracle King ended up in Detroit at all. Born in California in the mid-1860s to a father who was a Union army general in the U.S. Civil War, he received his training in mechanical engineering from Cornell University in Ithaca, N.Y. He had a million ideas of what to do with his life.

King moved to Detroit in 1889 at age 21, but it was only after a visit to the Chicago Exposition in 1893 that he realized a way to channel his ideas.

There, he spotted Gottlieb Daimler’s self-propelled carriage. If you could imagine after hundreds of years of horse-drawn wagons, there was suddenly no horse.

King set about to build a horseless carriage of his own and, upon learning that New England’s Duryea brothers, Charles and Frank, had already built and tested an automobile, there was no time to waste.

On March 6, 1896, 10 years after Carl Benz patented the first gasoline-powered automobile in Germany, and three years after the Duryea brothers’ first vehicle, King became the first driver of a gasoline automobile in Detroit. Everyone knows about Ford’s Model T, but Henry Ford was riding a bicycle at the time.

Three months before Ford took the wheel, King had his own momentous first drive, a spin that began when he steered his vehicle down St. Antoine Street to Jefferson Avenue, and then swung north on Detroit’s famous Woodward Avenue to Grand Boulevard. After that, he turned around and headed home, only to be greeted by a police officer who threatened to ticket him for disturbing the peace. 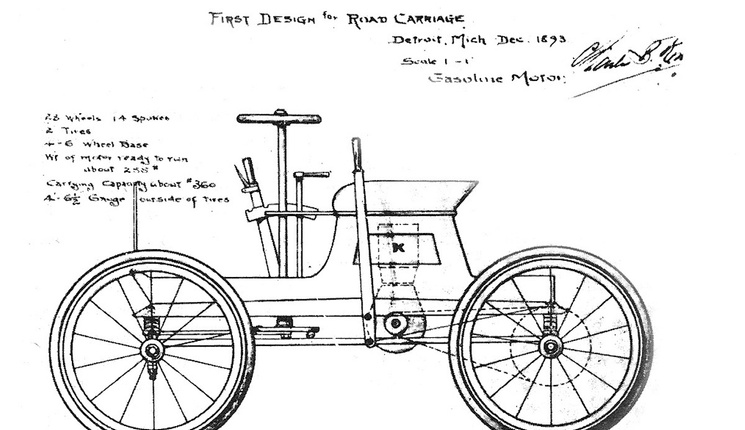 The drive was accomplished in full view of hundreds of spectators who were thrilled with what they were seeing.

Residents woke up to the Detroit Free Press story: “The first horseless carriage seen in this city was out on the streets last night . . . It is the invention of Charles B. King, a Detroiter, and its progress up Woodward Avenue about 11 o’clock caused a deal of comment, people crowding around it so that its progress was impeded. The apparatus seemed to work all right and went at the rate of five or six miles an hour at an even rate of speed.”

“I am convinced,” King told the Detroit Journal, “that, in time, the horseless carriage will supersede the horse.”

It would take only 20 years or so to prove him right. King served as a mentor to Ford, Ransom Olds, Jonathan Maxwell, Henry Joy and others. In fact, he provided parts, instructed and assisted Ford on his first Quadricycle at the same time King worked on his own car.

In 1903, King became chief engineer of the Northern Motor Car Co., where he designed the two-cylinder “Silent Northern” automobile that featured numerous innovations and the first running boards. For the 1907 Northern, he designed air brakes, an air-controlled clutch and other innovations for which he was granted patents. He was wildly successful, but boredom was starting to show.

Five years later, King left the company and spent two years in Europe studying automotive design. He returned to Detroit in 1910 and launched the King Motor Car Co. The King “Eight” (V8) was billed as “The Car of No Regrets.”

In fact, at the New York Auto Show in 1912, the King automobile was the only one to feature left-hand steering, which soon became the industry standard. At that time, he already had more than 40 automotive patents to his credit.

That year, however, he left his company, devoting his time to working on numerous other experiments and inventions. Said King to a colleague: “I’ve done what I wanted, now I want to be stimulated again.”

Some 20 years later, after numerous other projects and inventions, he returned to his automotive roots and became a founding member of the Automobile Old Timers, the original name of what was to become the Automotive Hall of Fame.

It was an effort to remember the early days of the auto industry and to honour its pioneers and leaders. King was inducted into that institution in 2009. Not that he would care. There were too many pictures to paint. Too many things to create. And too many songs to play.