Dreaming of the future. Toronto’s Baiocchi is reimaging how we get from Point A to Point B, and wants us to make money while we’re doing it

Join the Conversation (0)
After proving he can build electric bikes, scooters and off-road vehicles, Toronto entrepreneur Aldo Baiocchi is revving up his business. He is now working on electric vehicles, including one that he said will be able to go faster than anything of its kind on the market – and will even include a feature to mine cryptocurrency.

“I’ve always wanted to build a car,” said the 53-year-old. “I’ve been trying to do it for 15 years. I think I can do a better job than what’s out there – and we’re talking from scratch. Electric is obviously the way to go.”

Baiocchi developed a couple iterations before settling on the current prototype for his three-wheeled electric vehicle. Multiple companies worldwide are building three wheeled cars, including several in Canada, though they are legal in only some parts of the country. Baiocchi plans to sell his products in the U.S., where there is a larger market since these vehicles have received approval in a few states, notably California.

“The three-wheel market is not the biggest market, but to become the leader in that market you still have to have a sexy product that has speed,” he said. “This is the perfect city car. It will appeal to a lot of people. I think it’s a decent-sized market in which we could become number one in the world.

“Building with three wheels saves us some money on the production side and testing. Eventually we’ll build it with four wheels, but this is the best way to go to get it done faster and economically and lower costs to the consumer.”

From computers to EVs

Baiocchi’s background is not in manufacturing, it’s in computer software. He had been successful creating video games, but when the dot-com business crashed in 2001, he lost almost all his savings.

He stumbled into the electric mobility market later that year when he wanted to buy an electric scooter for his daughter but couldn’t find any in Toronto. Using his last $10,000, Baiocchi bought a scooter shipment from China, figuring he could easily sell them. But when the shipment arrived in Canada, it was seized by customs because these e-rides had not been approved for use in the country. 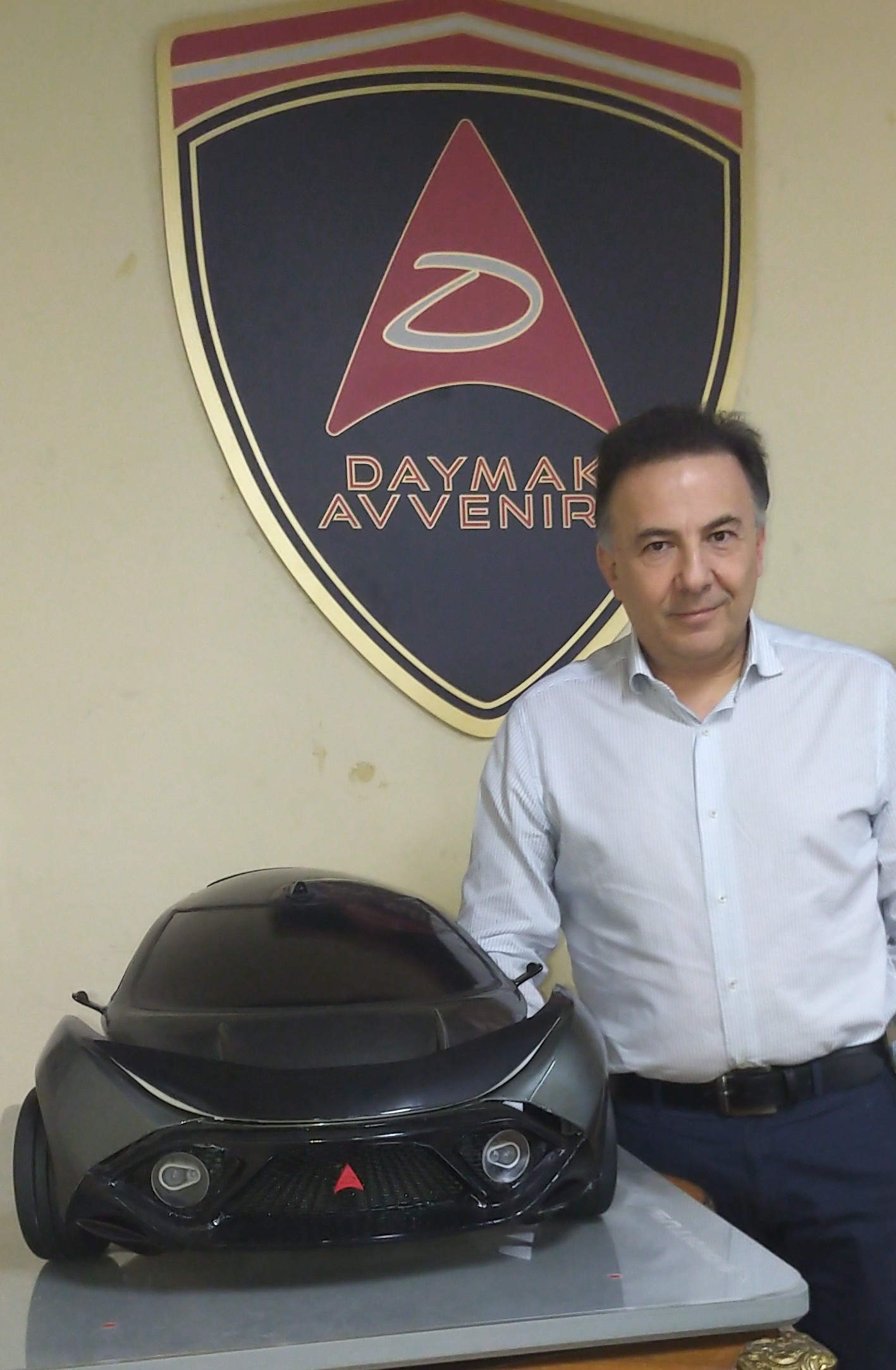 Baiocchi was told he could destroy the shipment or ship it back to China. Instead, he decided to send the shipment to the U.S., and was able to secure a buyer in Buffalo, N.Y. He ended up making money off the deal.

In 2002, Baiocchi decided to walk away from the digital software industry because he wanted to start a business he could “touch and feel.” He formed Daymak – using the initials of his first name, his wife, Yeganeh, and his children, Melissa and Daniella – and began selling mobility scooters and ebikes,

In 2011, after these vehicles were legalized in many Canadian provinces, Baiocchi’s business picked up speed.

His company, which is known for its cutting-edge designs, has now become the biggest distributor and developer in Canada when it comes to Light Electric Vehicle (LEV) technology, which is classified as anything under 500 pounds. Overall, Daymak has sold more than 100,000 units since its inception and has a global distribution network spanning more than 300 dealers, including big-box customers such as Walmart, Costco, TSC, QVC, Best Buy and Hudson’s Bay.

The Spiritus prototypes are currently being built in Argentina, where one of the designers is based, and will be test driven by a retired Formula One driver. Baiocchi would not divulge the driver’s name or the cost of hiring him. He said when the testing is completed, the company will publicize it.

One of the features Spiritus includes is technology that Daymak has developed to mine cryptocurrency. Mining is a process by which specialized computing systems are used to solve mathematical equations that then become part of the next block of bitcoins placed into circulation. Baiocchi said the patented Daymak technology can earn Spiritus owners $10 a day.

“I’ve got interest in the car from a lot of people, and I think the crypto angle helped,” he said. “This is a car that basically stands out from the rest. Even if it’s $10 a day, no car out there makes money, so this will be the first one of its kind and gives it an edge over (the three-wheel competitors). You don’t have to know anything about mining, so if you are making $10 a day it reduces the cost of the purchase.”

On a more ambitious level, Baiocchi has plans to build an electric vehicle with the ability to take off and land vertically, like a helicopter, and travel horizontally. The aircraft will resemble a flying saucer and will be marketed as Skyrider.

There are more than 100 companies around the world collectively investing billions of dollars on building electric vertical takeoff and landing aircrafts, known as eVTOLs, though the biggest obstacle they currently face is receiving approval for their use from federal aviation authorities. Baiocchi’s prototype is the only one that looks like an unidentified flying object.

“When I used to watch cartoons when I was young, all the flying vehicles were similar to this,” he said. “This is where the idea comes from. I want people to think that’s what you are buying because everyone’s imagination is pretty much the same when you say UFO. You have an image in your mind like on ‘The Jetsons.’

“I’ve always dreamed of building a car and one that flies, just like Elon Musk dreams of going to Mars.  My dream is slightly different. Imagine going to work in five minutes. Instead of a 45-minute drive, you are doing it in five minutes,” he said. “Imagine if you can crisscross the world and go see whatever you want. That’s my dream. You can basically work anywhere. The world technically becomes one country. That’s the long-term dream, and I think within 30 to 40 years we’re going to get there.”

When asked why he is taking such a risk going forward when he could have easily stuck with his proven products, Baiocchi laughed.

“It would not be exciting just to build the other products,” he said. “Yes, I could have gone forward without much risk, but you only live once, so I might as well go for it. I’d like to make a difference on the planet. Dreams are a key to everything. That what motivates me.”