A short history of the cup holder

Automakers did not think a place for beverages was worth including in their vehicles. A hot coffee changed that.

Join the Conversation (0)
Fifteen years ago, PricewaterhouseCoopers did a survey where it asked what people looked for in a car. The number of cup holders toped the list of features – even beating fuel efficiency. While gas prices may trump it today; the cup holder is likely still an important selling point.

Take for instance the family-sized 2022 Subaru Ascent. It boasts up to 153.5 cubic feet of passenger space, with an astronomical 19 cup and bottle holders, to ensure “everyone’s beverage is secure and close at hand.”

Those are a lot of options for your Big Gulp soda, venti caramel crunch frappe or Tim Hortons’ double-double. It is convenient for thirsty drivers and passengers, but how did we get here?

In the early days of car design, cup holders were as important as, say, having a hammock in your kitchen. The 1920s Sears catalogue offered a cupholder attachment for the Model T, but it was designed to be used alongside other accessories, like an attachable kitchenette and a fold-out table. It was mean to be set up roadside when you needed a respite on a long journey.

Luxury brands like Rolls Royce offered picnic baskets as part of its add-ons, and the 1957 Cadillac Eldorado Brougham, one of crooner Frank Sinatra’s favorite rides, came with magnetized cups and a pull-out minibar in the glovebox. For practical – and legal – reasons the feature never caught on and was quickly discontinued.

In 1950s America, two events coincided to elevate the car cup holder from a theoretical to a useful piece of equipment in cars. The signing of the Federal-Aid Highway Act of 1956 by U.S. President Dwight D. Eisenhower and the rise in popularity of drive-ins and drive-thru windows meant motorists were looking for a spill-free way to house their drinks.

While car manufacturers resisted installing cup holders, just as Sears offered up a variety of accessories for in-car convenience in the 1920s, entrepreneurs quickly made in-car snack trays that could be hung from the dashboard.

Inventors Jack Fazakerley of Los Angeles and Clyde W. Morgan of Dallas both patented prototypes of what would become the modern-day cup holder in 1953. Morgan’s The Refreshment Tray for Automobile Instrument Panel boasted two “wells to receive beverage bottles or the like and retain them in an upright position even during movement of the automobile.”

In 1955 Chevy introduced a cup holder, actually just two indentations on the back of the glove compartment door, that worked if the car was parked, but wobbled wildly when the vehicle was being driven. The 1960s and 1970s saw trays that hooked on to the window-well of vehicles, making in-car dining more convenient, but cup holders, as we know them today, didn’t materialize until 1983. 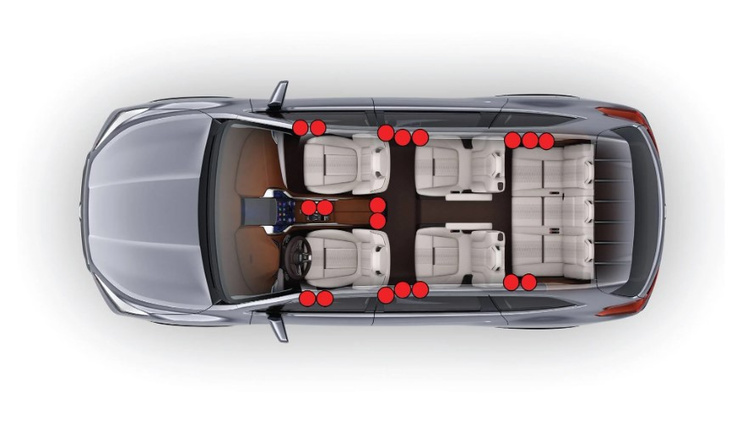 It was in that year that Chrysler installed what the U.S. News and World Report called “crannies for drinking cups” in its Dodge Caravan and Plymouth Voyager. Embedded into the plastic of the dashboard these cup holders were sturdy and provided a stable space to place two steaming hot coffees.

Even after success the “crannies” in the Caravan and Voyager, it would take a lawsuit by a 79-year-old woman named Stella Liebeck to make car manufacturers take cup holders seriously.

On Feb. 27, 1992, the British-born Liebeck, who was living in Albuquerque, N.M., was driving with her grandson in a cup holder-less 1989 Ford Probe. The pair stopped at a McDonald's drive-through window so Liebeck could order a 49-cent cup of coffee.

In the parked car, she balanced the hot coffee between her knees to add cream and sugar. As she removed the lid, the drink tipped, spilling its hot contents on her lap. As a result, she was hospitalized and underwent eight days of skin graft treatments for third-degree burns. Left with a permanent disfiguration, Liebeck sued McDonald’s and eventually settled out of court for an undisclosed amount.

The case was front page news, inspired jokes on late night television and even a documentary called “Hot Coffee.” It is also said to be the final push car manufacturers needed to make cup holders a standard part of vehicle design.

Since then, multiple cup holders have become de rigor. Even the sleek Lamborghini Huracan, which can hit speeds up to 201 miles per hour, has a hidden cup holder on the passenger side dashboard.

There are many reasons why cup holders are now standard. They offer convenience and safety for people who spend a great deal of time in their car, and new designs, like a gyroscopic cup holder that will keep your drink level, pop up every year to accommodate the various sizes and shapes of drink.

But are we, as the Wall Street Journal suggested, “approaching peak cupholder?” The answer, it would seem, is no.

Consumers want them, and the French-born scholar and marketer G. Clotaire Rapaille thinks he knows why. He said the warm drinks we enjoy as we drive are a replacement for mother’s milk and make us feel safer. “What was the key element of safety when you were a child?” he said. “It was that your mother fed you, and there was warm liquid. That’s why cupholders are absolutely crucial.”