The Wrangler 75th is not for everybody, in fact, only a few. But for them, getting there is not half fun - being there is all the fun.

CALABOGIE, ON: The name 2016 Jeep Wrangler Unlimited Sahara 75th Anniversary 4X4 is almost as long as the number of different places you can drive it to.

The Wrangler 75th is not for everybody, in fact, only a few.

They are part of a countless number of people who believe a weekend out collecting trophy mud is a weekend well spent.

The 75th anniversary models celebrate the first ever Jeep, which was born at the start of the Second World War as a go anywhere, do anything 4X4 and was one of the main reasons the Allies won because it was so versatile.

After the war, soldiers returning home bought them in droves as army surplus, but since then Jeeps have evolved into six distinct models, from the entry-level Renegade up to the torrid Grand Cherokee SRT.

The foundation on which all of this was built is the Wrangler, which remains visually, and spiritually, true to the 1941 Jeep.

And to mark this milestone, every Jeep in the lineup is now available as special 75th Anniversary editions, including the 2016 Jeep Wrangler Unlimited Sahara 75th Anniversary 4X4 tested here. 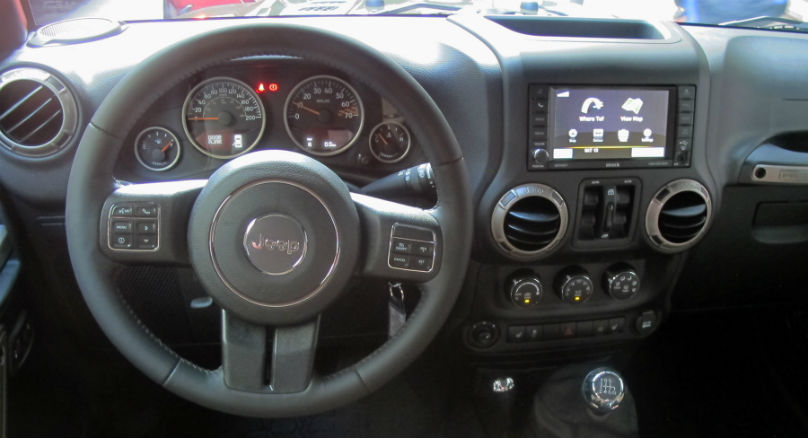 But it also has supple, leather-lined seating, a killer sound system with 10-inch sub-woofer imbedded in the cargo floor and navi-infotainment system people back in 1941 never would have been able to dream about. 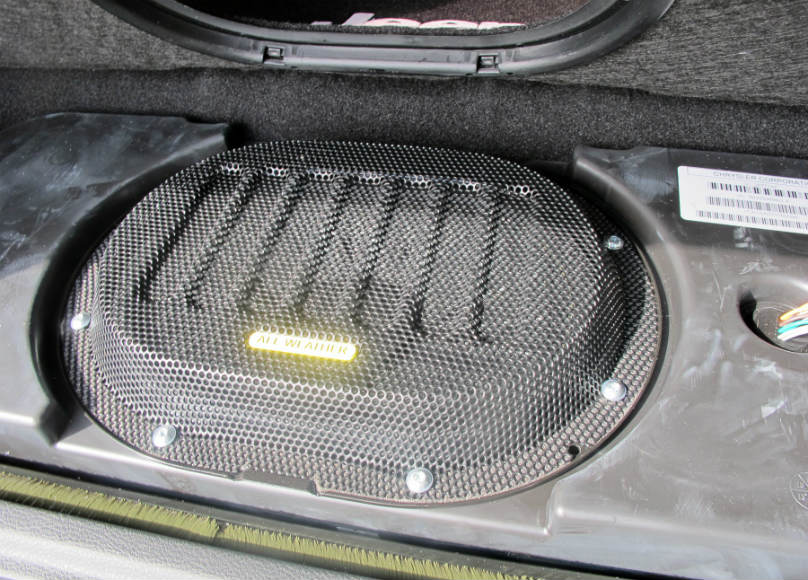 It is not the most ergonomic vehicle in the world to drive and once you’re in the driver’s seat the instrument panel is just inches away from your jaw.

Nonetheless, it has a modern day push-button starter, yet the manual shifter is a long lever with the six forward manual gears somewhere deep below the floor. 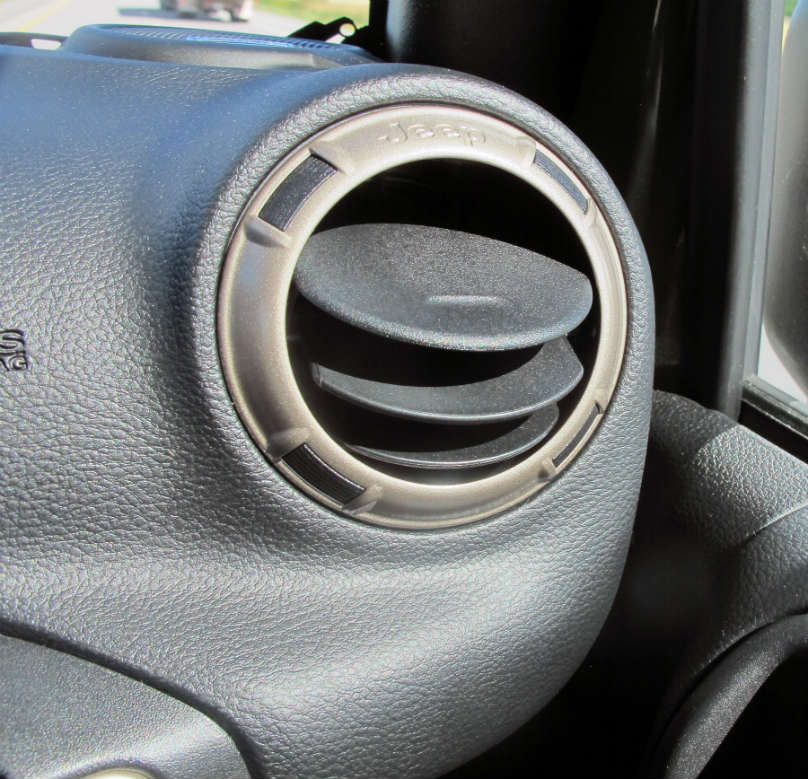 And while there is a five-speed automatic transmission available, most of people buying one of these want the manual.

It’s nothing like the Mazda Miata manual that almost flicks itself into the gear. Here it’s a big pole you use to hunt to find the right slot until you get used to it.

The clutch is extremely light, but the pedal is placed close the brake pedal. More then once I depressed the clutch and found my left foot caught under the brake pedal. Jim Kenzie of the Toronto Star noticed the same thing. 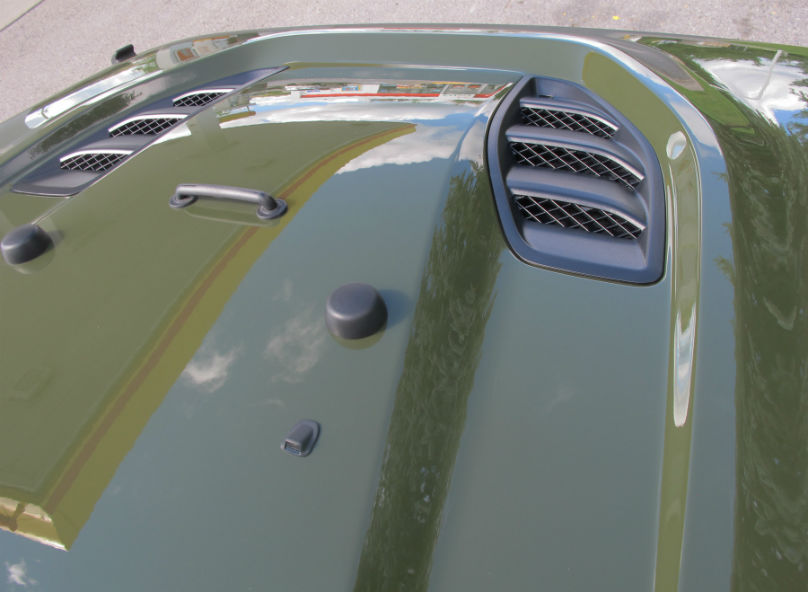 Now in Jeep’s defense, the Wrangler 75th is essentially the same model Jeep has been building for decades and the end result is it’s what buyers want and expect.

It you want civility, the Grand Cherokee 75th Anniversary Edition would do nicely.

The Wrangler 75th comes with a fabric top that is secured at the front by two seriously sized clamps on the windshield surround.

Unhook them and it folds back and tucks into itself at the rear above the cargo area, which is accessed by a swing-out door with the spare tire and carrier just like Jeep has done for decades and one of the must-have signature touches for any pure Jeep buyer.

The Brooklyn Bridge size full roll cage is padded. Attached to it are rubberized “oh s..t” grab handles that I used several times when it came to the off-roading portion of the Canada Jeep Anniversary Drive, which was part of the press launch for the lineup. 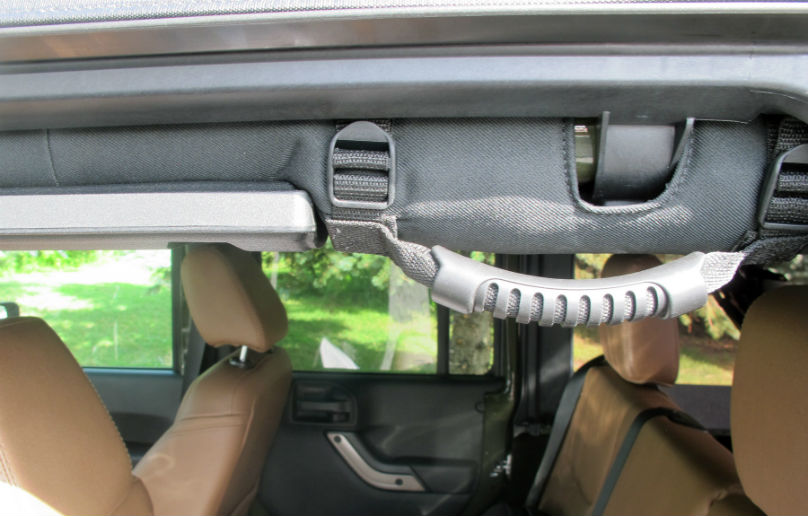 Outwardly, the Wrangler 75 can’t be confused with anything else on the road.

Like the Porsche 911, you can spot a Wrangler from literally a mile away.

RELATED: Meet the family: figuring out which Porsche 911 is best

Just walk around and it abounds of Jeepness, with features such as the outside door hinges, the front flat top fenders, and of course, the seven-slot grille with round headlights on either side. 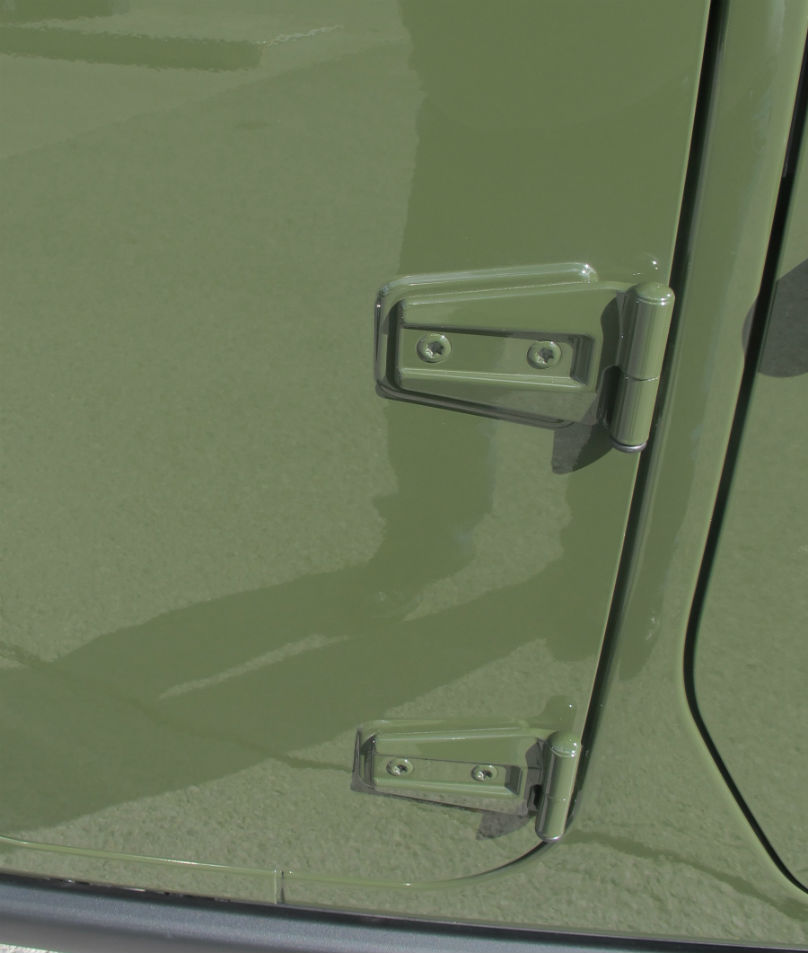 And then the Wrangler 75th takes it up a notch with three special colours (Sarge Green as tested), huge front and rear steel bumpers with tow hooks and perched up on 17-inch wheels with massive P245/17 on/off road tires and badges everywhere. 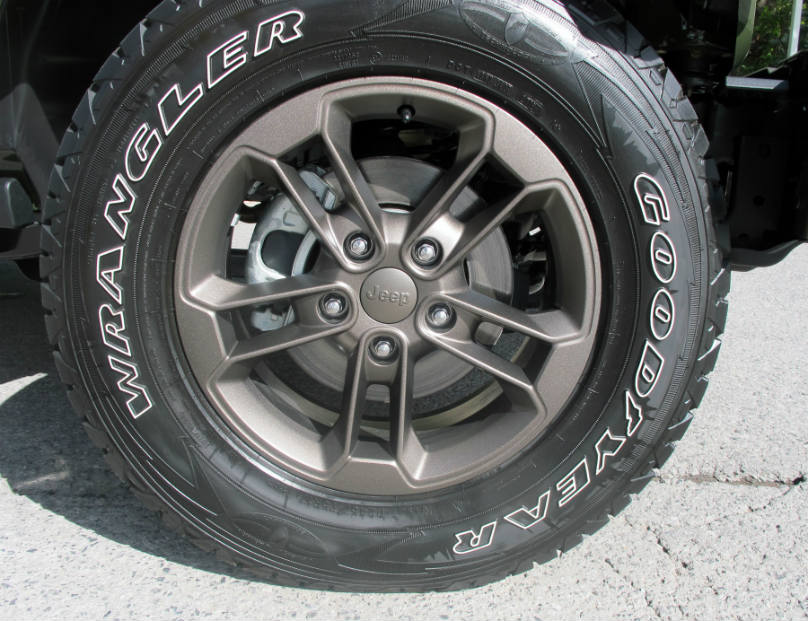 Once off the highway, the Wrangler 75th came into its own over a more than challenging off-road course in a hydro corridor near Calabogie, ON.

Now the easy thing would have been to use the smaller lever on the transmission tunnel to shift the transfer case into Four Low, but Jeep has other ideas.

With a convoy of the current Trail Rated models, we just remained in Four High and went through mud, over bolder strewn paths and down some steep grades with Hill Descent activated that takes every fibre of your being to keep your foot off the brake pedal and let the computers do the job. 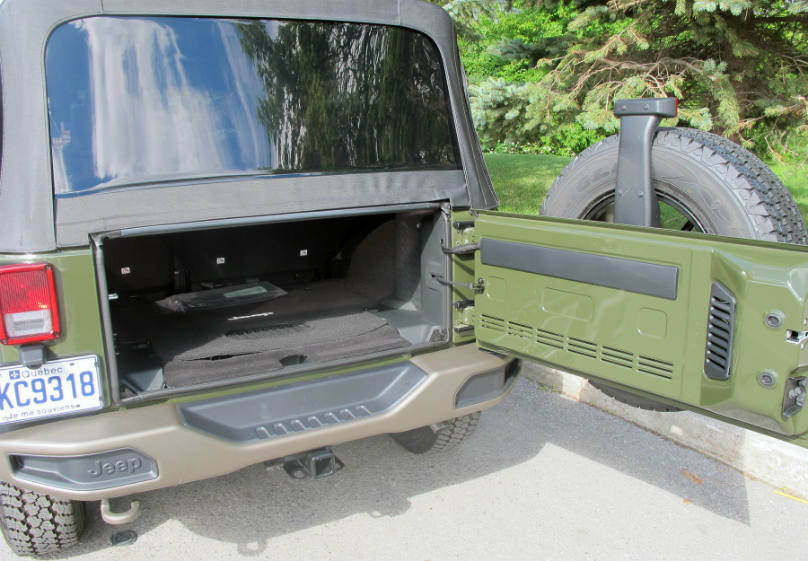 The Wrangler 75th, frankly, made it simple.

It makes one realize, after you drive one, why the Jeep, the Wrangler in particular, has such an enduring following.

It makes Jeep’s 75th anniversary really something to celebrate. 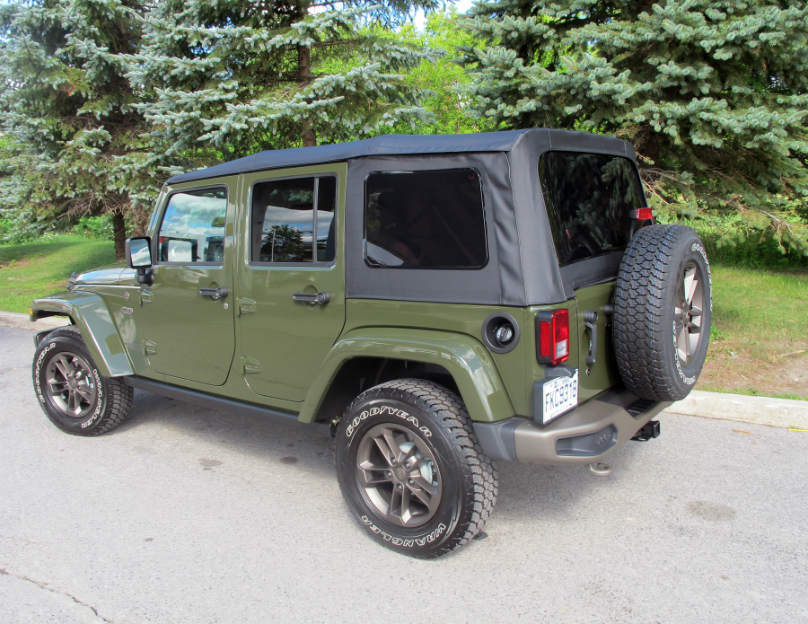