The Sanair racetrack is located some 100 km east of Montreal.

The Porsche Taycan is an important car for the German auto industry. It proved that its manufacturing sector, which has had its feet deeply warded in motorsports and gasoline for over a century, can in fact turn its business model around to better face tomorrow’s mobility realities.

But the Taycan also proved that a Porsche can still be a Porsche without its dependence on petrol. The fact that Porsche simply didn’t fill a 911’s floor with lithium-ion batteries says a lot about its EV philosophy. The Taycan is an entirely new model because it signifies an entirely new era for the German auto industry. This is the next chapter in Porsche’s legacy. And it’s off to a darn good start.

Porsche Taycan reviews are now flooding the Internet, so I’m not going to waste too much Internet ink writing about the car itself. You probably already know that no matter which model you select, whether it be the “baby” Taycan 4S featured here, or the neck snapping Taycan Turbo S, that this is a performance machine in every respect. It just happens to be electric.

Yes, the Taycan offers blistering acceleration, ultra-precise reflexes and a surprisingly analog driving feel. But its EPA-certified range of only 363 km (for the 4S model you see here) means that it’s considerably less than what Tesla offers in the similarly priced Model S Long Range (663 km of advertised range). On paper then, it’s easy to dismiss Porsche’s first electric attempt as a failure.

Because this is the first time I drive the Porsche Taycan, I figured there must be more to this machine than just specifications on a spec sheet. Throughout its rich history, Porsche has consecutively proven that its vehicles represent more than the sum of their parts. They’re about emotion, passion, and the experience they convey behind the wheel. Curious to find out if the Taycan still delivers on these values, I set out on a long road tip during a tough Canadian blizzard in search of some answers. 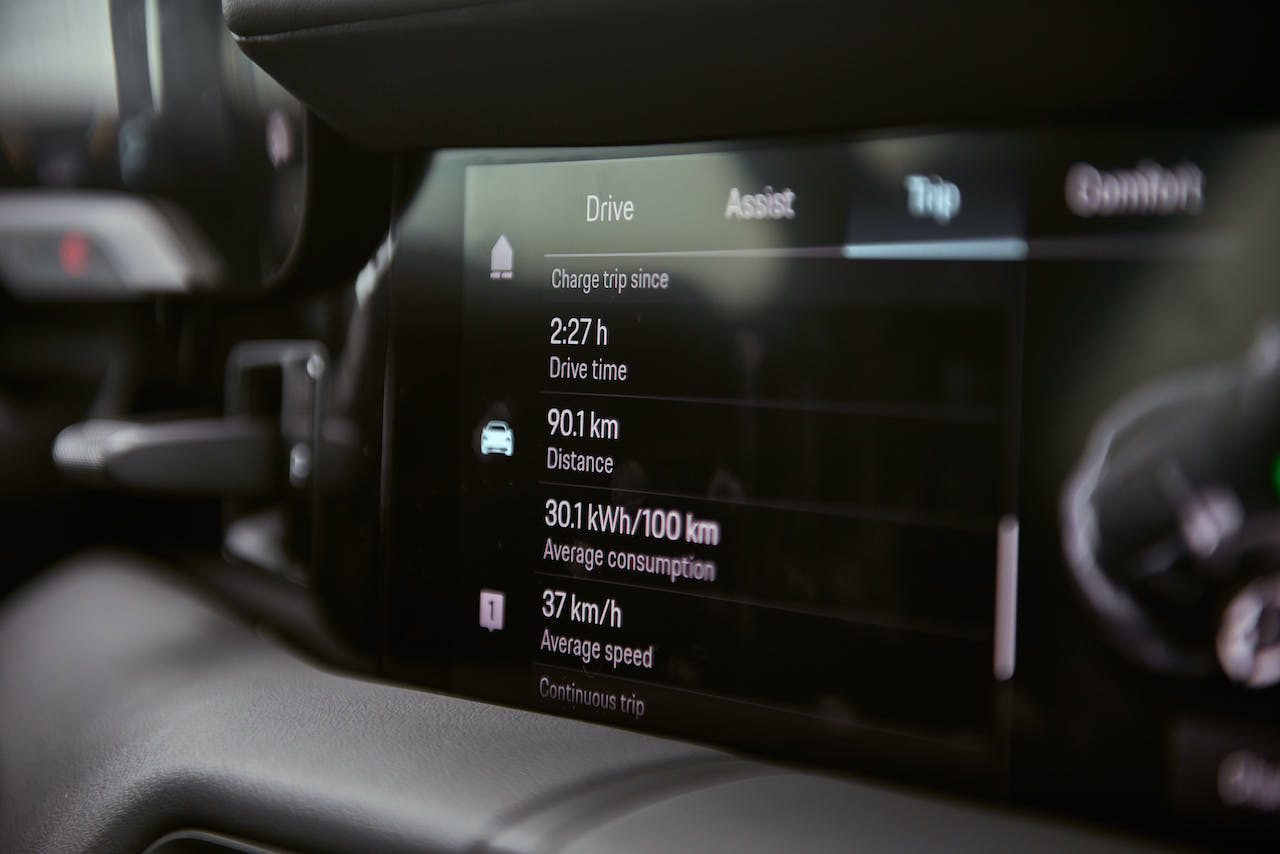 It’s a proven fact that electric vehicles don’t do well in the cold. Once the thermometer slides underneath 0 degrees Celsius, a battery has a lot more difficulty maintaining its stored energy due to slower-moving electrons. Heating up the car’s cabin alone during such conditions will also chew up a large chunk of an EV’s available energy source. During the winter months, an electric car can lose anywhere between 30 per cent and 50 per cent of its efficiency.

The morning I pulled 240V (level 2) charger out of the Taycan’s driver’s side port (the Taycan has two ports for different charger types), the thermometer indicated a brain-damaging -20 degrees Celsius. Thankfully, the Taycan 4S allows its user to preheat its 79.2 kWh battery even if it’s sitting out there in the cold, which I did before unplugging it. This allowed the onboard computer to project 335 km of available range, an only 30-km drop from the EPA’s official numbers. Not bad.

After resetting the car’s odometer and making sure my cabin was nice and warm, I set out into the slippery countryside as the snow came plowing down on my windshield.

I was fascinated by the Taycan’s level of traction out there in the wild. Even if the car is low to the ground, it feels secure, well-planted and confidence inspiring. This, of course, has a lot to do with its floor-mounted battery pack, which lowers the vehicle’s entire center of gravity. But it’s also thanks to the precision of the electric motors (the Taycan is all-wheel drive), which control wheel rotation far quicker than any mechanical differential ever could, that convey utmost control in such harsh conditions.

My main goal with this roadtrip was to determine if I could rely solely on the Taycan’s range without using a charging station. What I mean by that is that I wanted to perform a round trip without having to recharge on the road. Would the Taycan allow me to drive 335 km in this weather? Or would its predicted range let me down?

Perhaps, more importantly, I wondered if I could drive this thing like a Porsche. That meant gunning its throttle at times and indulge in some smooth power slides without fear of running out of electrons. After all, even if the 4S is the “slow” one of the Taycan the lineup, it still pumps out a combined output of 522 horsepower and 472 lb-ft of torque from two electric motors. Acceleration from zero-100 km/h, according to Porsche, is achieved in 3.8 seconds. 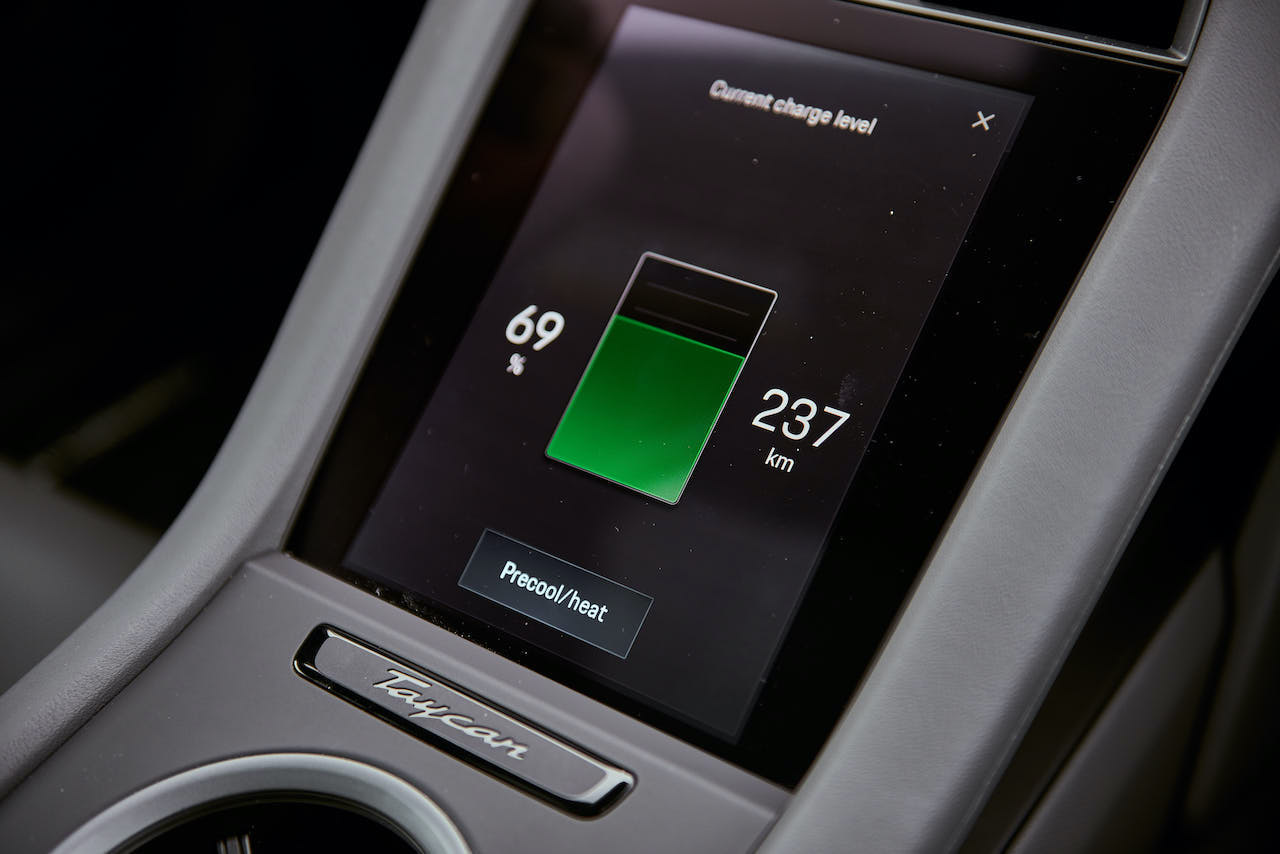 Range anxiety is now a thing of the past

At this point I feel that it’s important to underline that the reason I wasn’t afraid of running out of electricity was thanks to Québec’s well-established EV infrastructure. If I were to run out of juice, I could safely rely on the Electric Circuit’s charging grid, which currently counts more than 3,000 public chargers scattered across the province. All I needed to do was launch a free app on my phone and I’d find a charger close to my location.

In other words, I had way more freedom than I needed. Range anxiety was never an issue.

I decided that I’d head deep into the Montérégie region to visit the Sanair racetrack, which is located some 100 km east of Montreal. I figured that since Porsche has such a rich history in racing, that Sanair, which once hosted some of the world’s best SCCA Trans-Am, NHRA and Indy Car races during its heydays, was a fitting location for the car I was driving.

Today, Sanair is nothing but a relic of its boiling past. While the facility still hosts some local events, its infrastructure is delapidated to the point of being unsafe. The complex, which spans over 10 acres of land, includes a one mile drag strip, a road course, a snow course, a motocross circuit and a trioval track. Today, it sits quietly in the middle of a desolate corn field with its main control tower looming over its ageing pavement.

Porsche Canada doesn’t allow us auto journalists to bring its vehicles on the track unless it’s during a controlled Porsche event, which meant I couldn’t try the Taycan’s all-wheel drive system on Sanair’s snow circuit. But driving the car around the facility was a clear indication of the times.

Sanair is no longer the crowd-attracting location it once was, and the COVID-19 pandemic simply accelerated its decay. Driving around it in the Taycan and peeking through its rusted-out safety fences, I felt a sense of deep nostalgia rush through my veins. Here I was, in the middle of nowhere, drenched in an abundant snowfall, staring at a racing facility – which once hosted more than 30,000 people per event – that’s now struggling to keep its head out of the water. I, meanwhile, had gotten there in a sport sedan that consumes no petrol at all.

As I quietly pulled away in the oh-so-smooth Taycan, I couldn’t help but wonder what the future of automotive racing will be like in an all-electric world. This used to be a place where the low-pitched below of pushrod V8s would sear over the countryside every weekend, shaking up the souls of local residents the same way a rock band excites the senses during a music festival.

Today, Sanair is as quiet as a library. The only thing that even comes close to some form of life these days are a bunch of deer looking for their way back into the nearby forest. Like many racetracks across the country, Sanair is dying.

All of this nostalgia had me reflecting on how much the world has changed in such short notice. And I had gotten so compelled by it all, that had completely ignored the Taycan’s range. But it was fine. I had more than enough to return home.

Out there in Quebec’s persistent cold, the Taycan’s impeccable road manners, instant throttle response, and meticulous build quality had me cocooned in what translates into one of the best year-round daily drivers Porsche has ever built. The round trip had totaled 280 km, and had only cost me $12 in electricity. Yet, the onboard told me I still had 50 km of range left. So yes, you can rely on the Taycan’s range in winter. More importantly than that, you can rely on its badge to offer you one of the most memorable drives of your life.