With its long list of power and performance advantages, handsome look and Honda reliability, the VFR1200X, is definitely one bike that is worth checking out.

Sometimes when you review both cars and bikes, you can connect common trends that cross both genres.

In the automotive world, customers are shifting from sedans to crossovers.

CUVs blend a little bit of everything, building on fuel-efficient car platforms, mixing in the utility of minivan and tall wagon architecture then adding a dash of SUV-like attitude.

In the same way, more than a decade after the “Long Way Round” epic, adventure bikes continue to gain romantic traction, mixing everyday abilities with long haul touring traits and making at least a nod towards rugged off-road challenges.

Last year, Honda added two new motorcycles of note to the big bike side of their adventure stable – the fabled Africa Twin and, tested here, the VFR1200X.

The VFR1200X, launched much earlier in Europe and also known as the Crosstourer, was an adventure follow-up to the elegant VFR1200F sport tourer, a bike that never quite made it here, falling victim to currency fluctuations, the same reason why the VFR1200X’s North American debut was delayed for so many years. 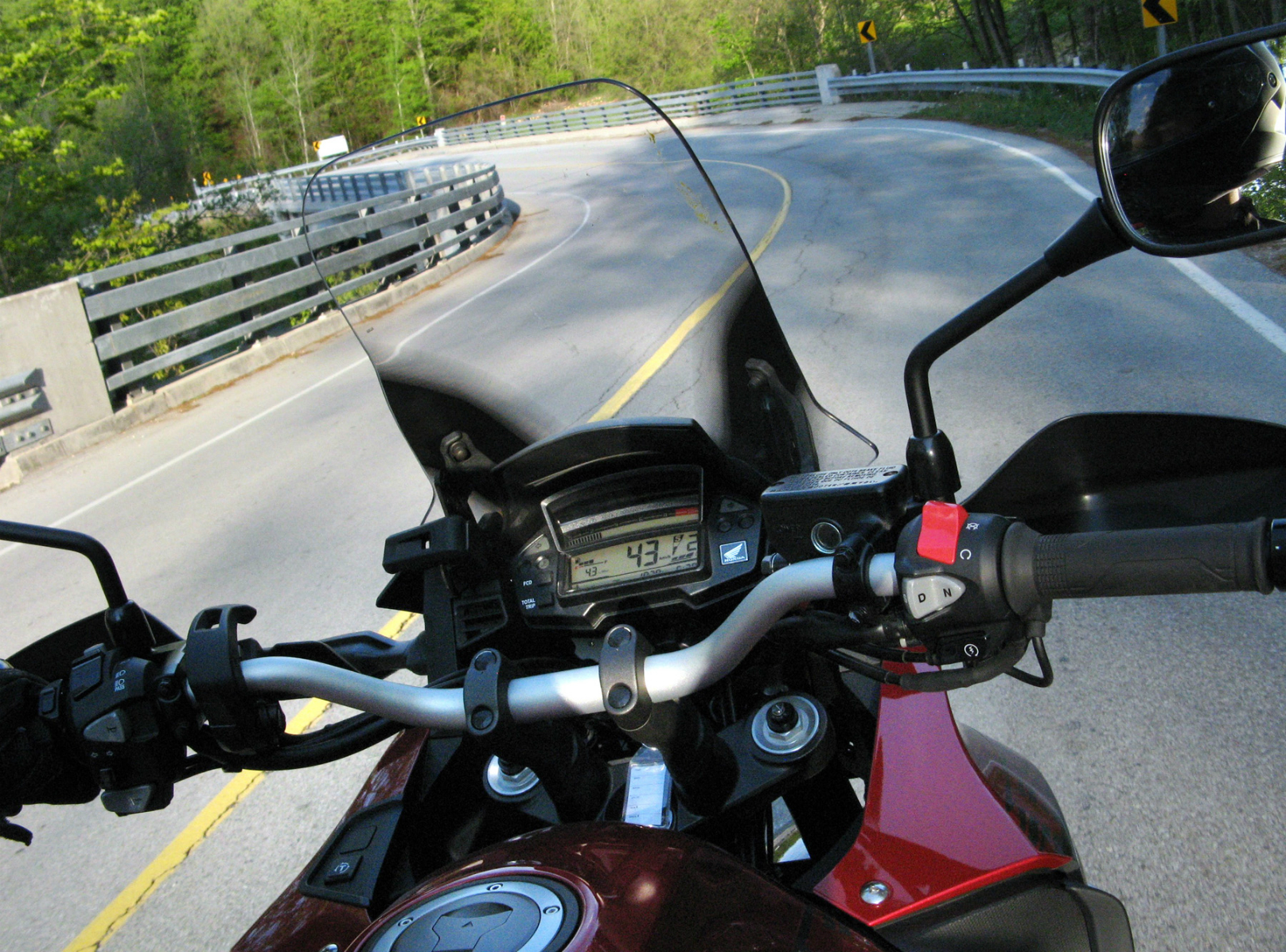 But in that time the VFR1200X has evolved considerably.

Its motor has been tweaked for more bottom-end torque, and it has added new techs that include an optional Dual-Clutch Transmission (DCT) ($1,000) with four automatic shift modes (“Drive” and three “Sport” modes) along with a three-choice Honda Selectable Torque Control system (HSTC).

The VFR1200X is the biggest bike in Honda’s adventure niche, with an 850 mm seat height that will have the short inseam crowd stretching their toes for ground purchase.

It’s not exactly like riding a ladder but the lofty upright seating position gives a good left turn view and exaggerates your corner leans nicely.

Power comes from a burly 1,237 cc V4, honking forth with a lovely snarl and ingeniously designed with the rear two cylinders (where your legs are) structured closer together.

I started off with the VFR1200X DCT model ($19,399). I’ve ridden DCTs before but, occasionally, muscle memory kicks in and your left hand grabs for an invisible clutch lever while your left foot twitches to shift. 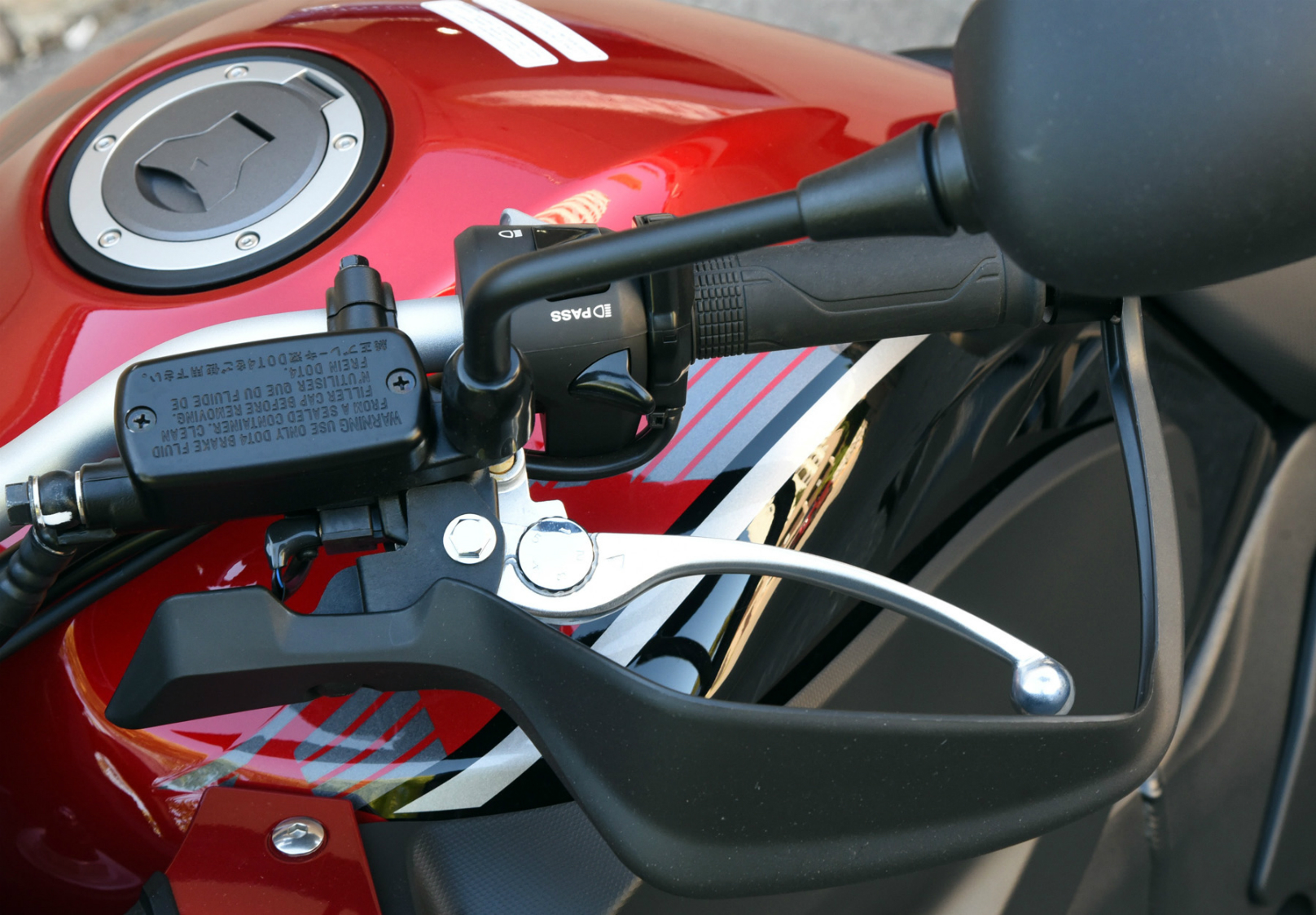 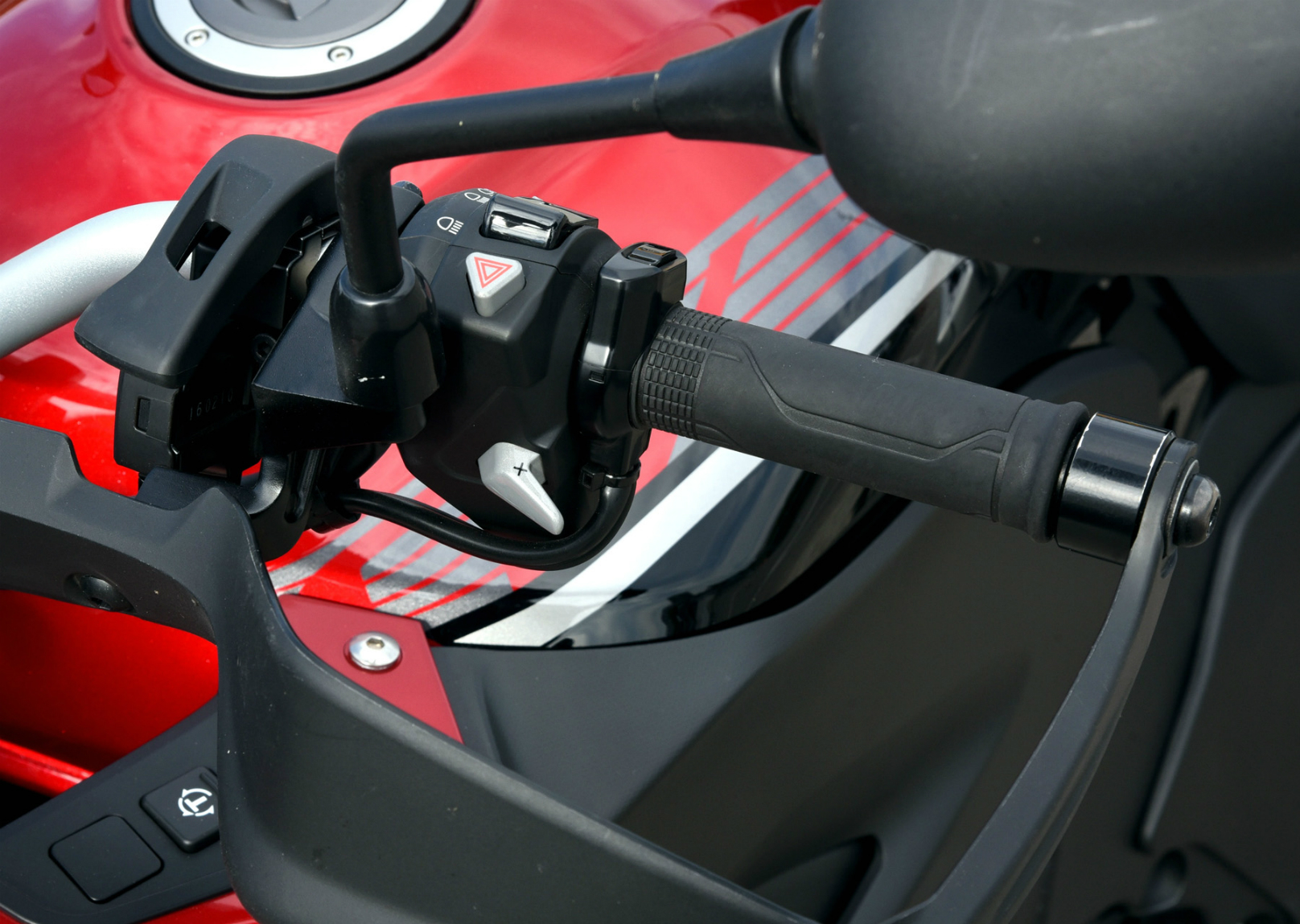 Honda does offer an optional pedal shifter ($666) for those who can’t quite handle the novelty, which seems kind of silly, or, if you still have control issues, you can use the manual shift buttons on the left grip.

But it’s easier to just let the DCT do its job automatically.

In the “D” position the controlling algorithm shifts early and often, plateauing the revs at a very car-like 2,000-rpm.

This, along with a hair-trigger throttle and ample power translated through a shaft drive, can lead to a bit of low-rev herky-jerkiness. So I tended to cycle through the “Sport” modes, which raises the shift point to around 3,000 rpm, smoothing the transitions through the cogs. Even so the bike seems happiest at touring speeds above 70 km/h.

Given its size, mass and 287 kg curb weight, the VFR1200X is not really an urban strafer.

And, despite its design and attitude, it’s not really nimble enough for bush bashing either. Why would you bother anyway, given Honda’s extensive choices of trail, competition and dual sport dirt bike alternatives?

Having said that though, yes, the VFR1200X does open a few long haul touring options, and it will take you off the beaten path and down back roads if you need it to.

Features worth noting include a lightweight aluminum frame, spoked wheels, suspension adjustments in front and back, a roomy seat, a windscreen that can be easily adjusted on-the-fly with one hand, LED self-cancelling signals, standard hand guards, heated grips and a 12V power outlet up front (a second 12V outlet($235) is optional). 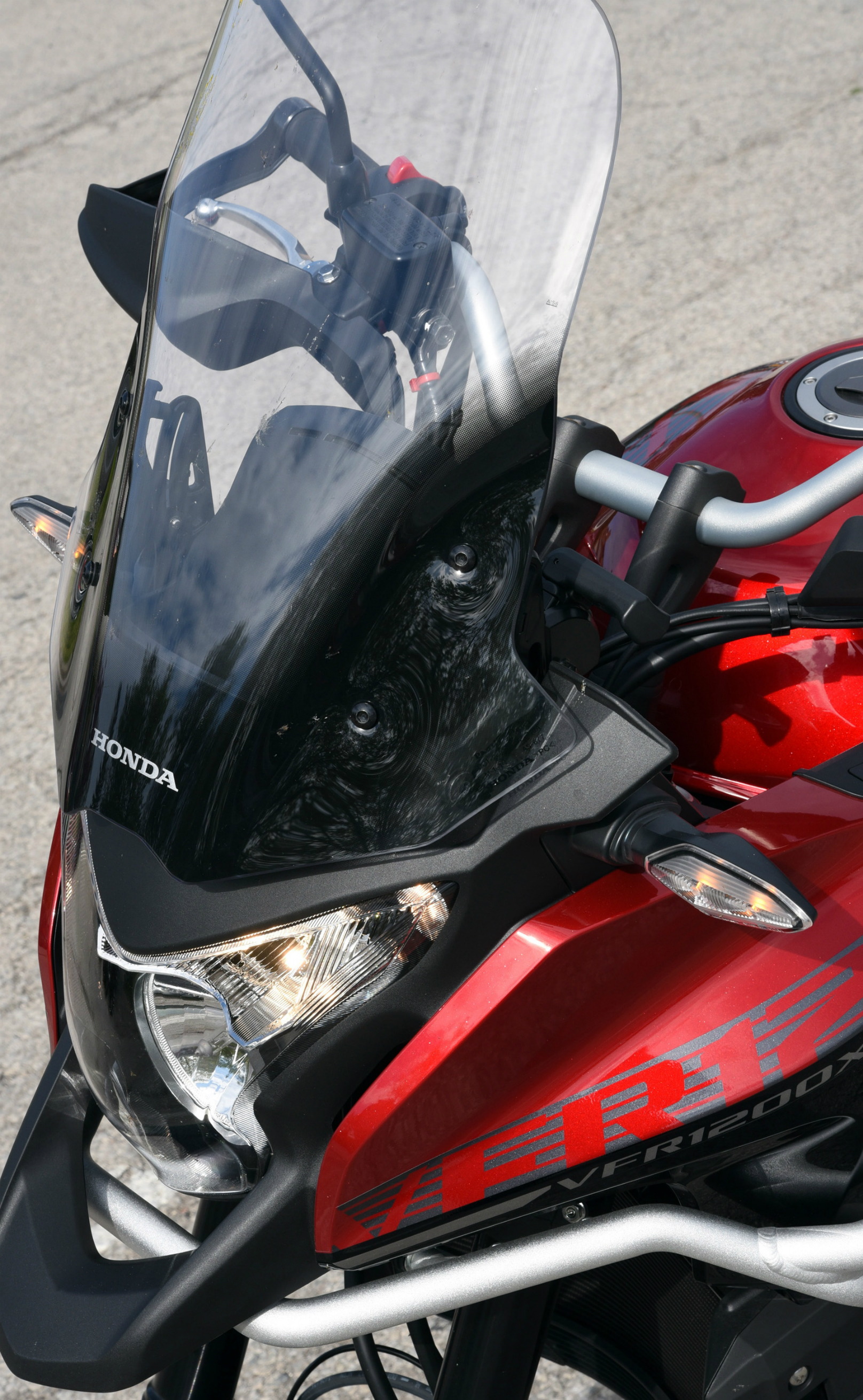 My first DCT tester also mounted protective side pipes ($602) and was well dressed for its adventure role with aluminum-look touring panniers ($1,275) featuring a helmet-swallowing 39-litre box on the left side and a 35-litre version on the right (allowing for exhaust). A matching 39-litre top box ($688) is also available along with other accessories.

A follow-up ride on a second, stripped down VFR1200X manual shift version ($18,399), sans baggage, illustrated the viable option of saving a few grand and about 10 kg of transmission weight for the familiarity of a more orthodox riding experience. 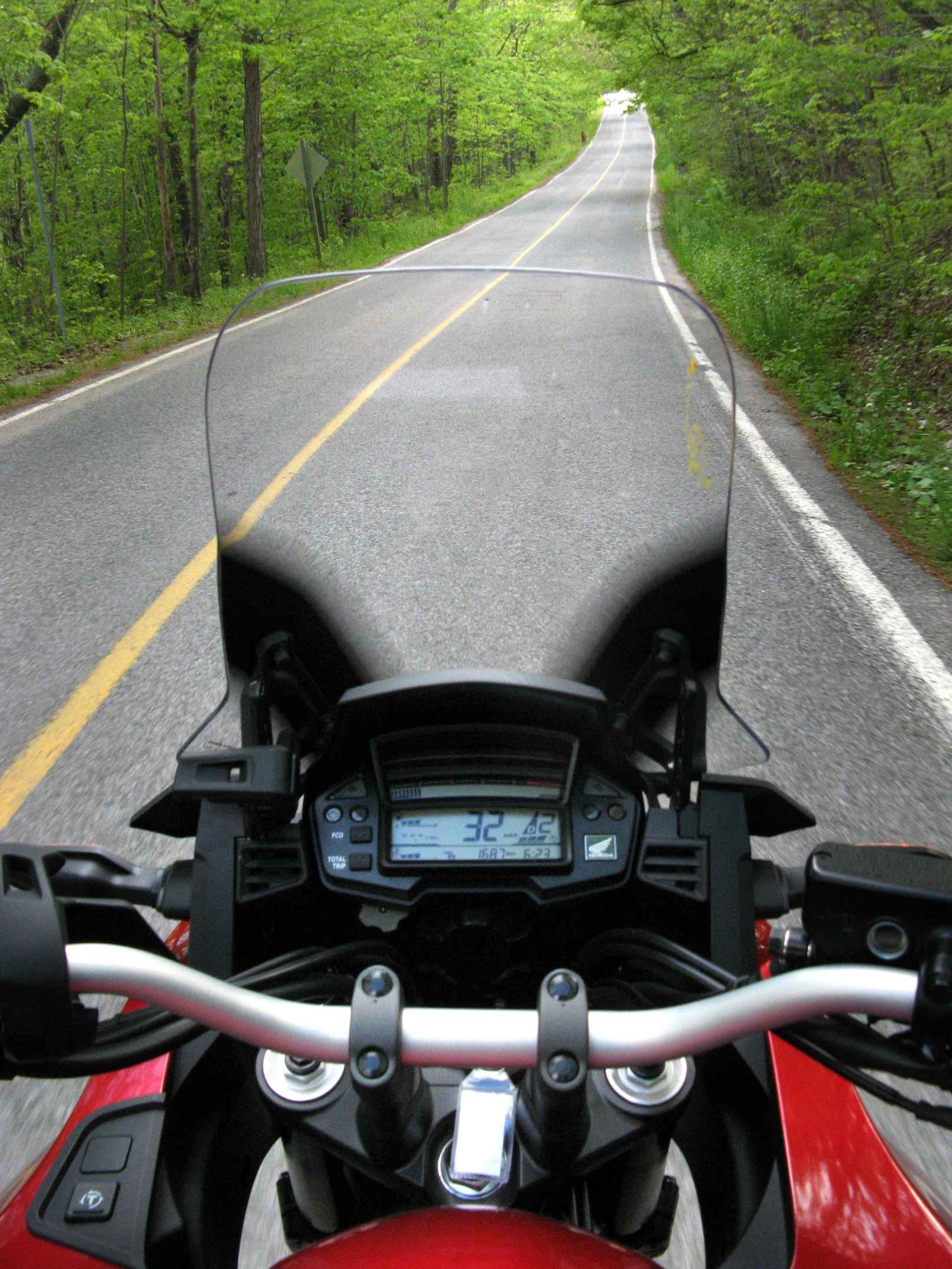 Savvy shoppers might be able to hunt up some 2016 models with MSRPs listed $400 lower, and with a little more haggling room.

But for anyone interested in this category, I would also recommend test riding manual or DCT versions of the Africa Twin.

It’s an alternative choice that offers a still potent one-litre powerplant, smoother DCT power delivery through a chain drive final, a cheaper starting price and a  wider range of colour choices this year.

Yup, it’s lots of adventure options to choose from.

And with its long list of power and performance advantages, handsome look and Honda reliability, the VFR1200X, is definitely one bike that is worth checking out. 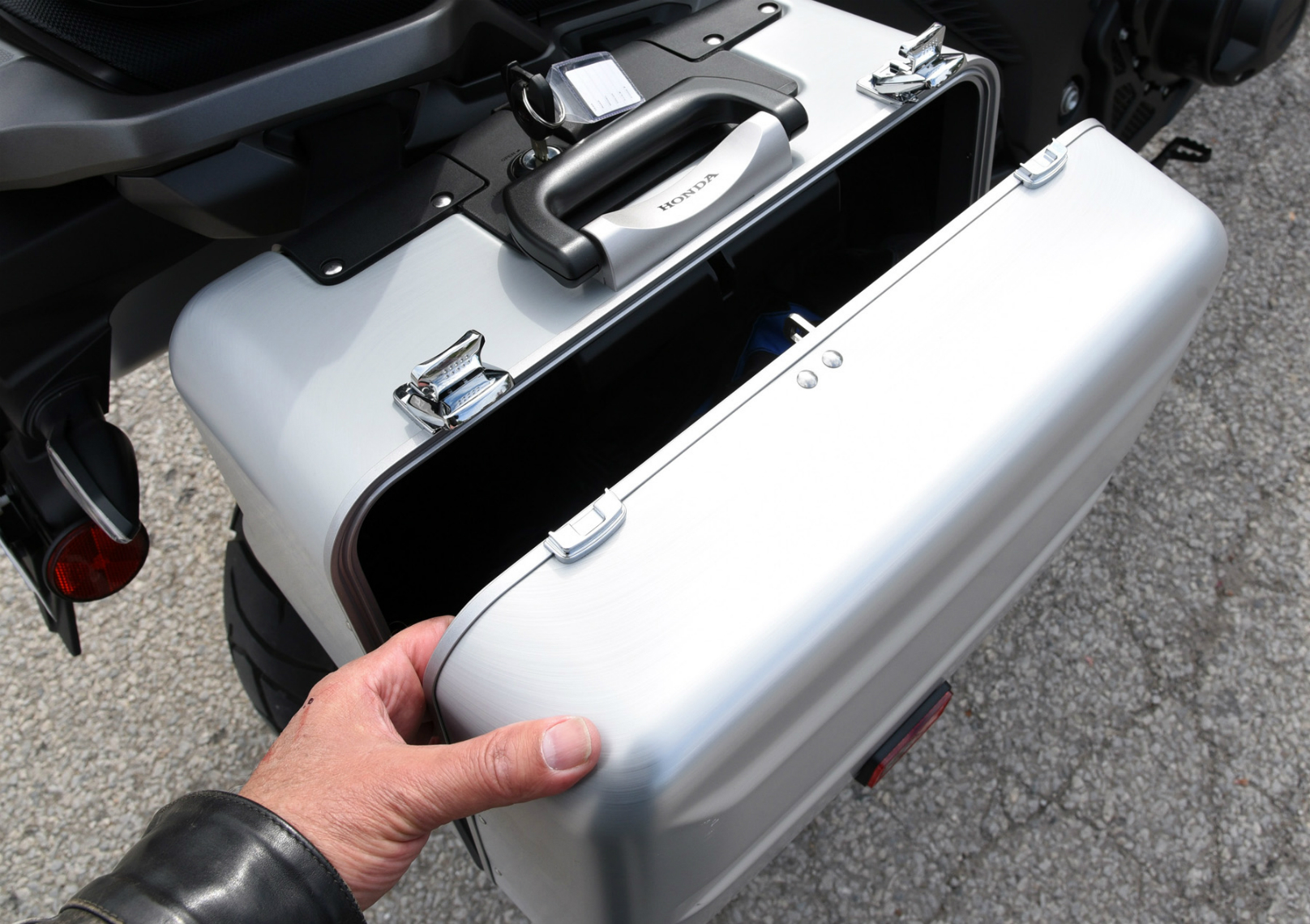