Veloster Turbo blends fun and practicality in a stylish package

The Veloster’s tidy dimensions mean it is over a foot shorter than its Elantra brother. Yet, space inside was more than adequate upfront

Back in the ‘90s, the automotive landscape was awash with two-door coupes featuring expressive styling but riding on the bones of economy cars with which they shared a platform. Hyundai jumped on board with this trend in 1997—rolling out the Tiburon— built with budget Elantra bits but sporting adventurous styling and a funky interior. The Tiburon enjoyed immediate popularity in the Canadian marketplace, being bought by folks desiring a sporty looking vehicle without a sky-high price tag and upkeep. An easy-handling front-wheel drive chassis and high feature content made it a popular choice.

Tiburon production came to an end in 2009, at which point the South Korean automaker introduced the two-door Genesis Coupe. Sporting a new platform and making the switch to rear-wheel drive, the target market of the Genesis Coupe was a bit different than the Tiburon, leaving those customers adrift. The Veloster appeared in 2011, with its front-drive economy car roots and funky styling, suggesting it as a Tiburon successor the Genesis never claimed to be. 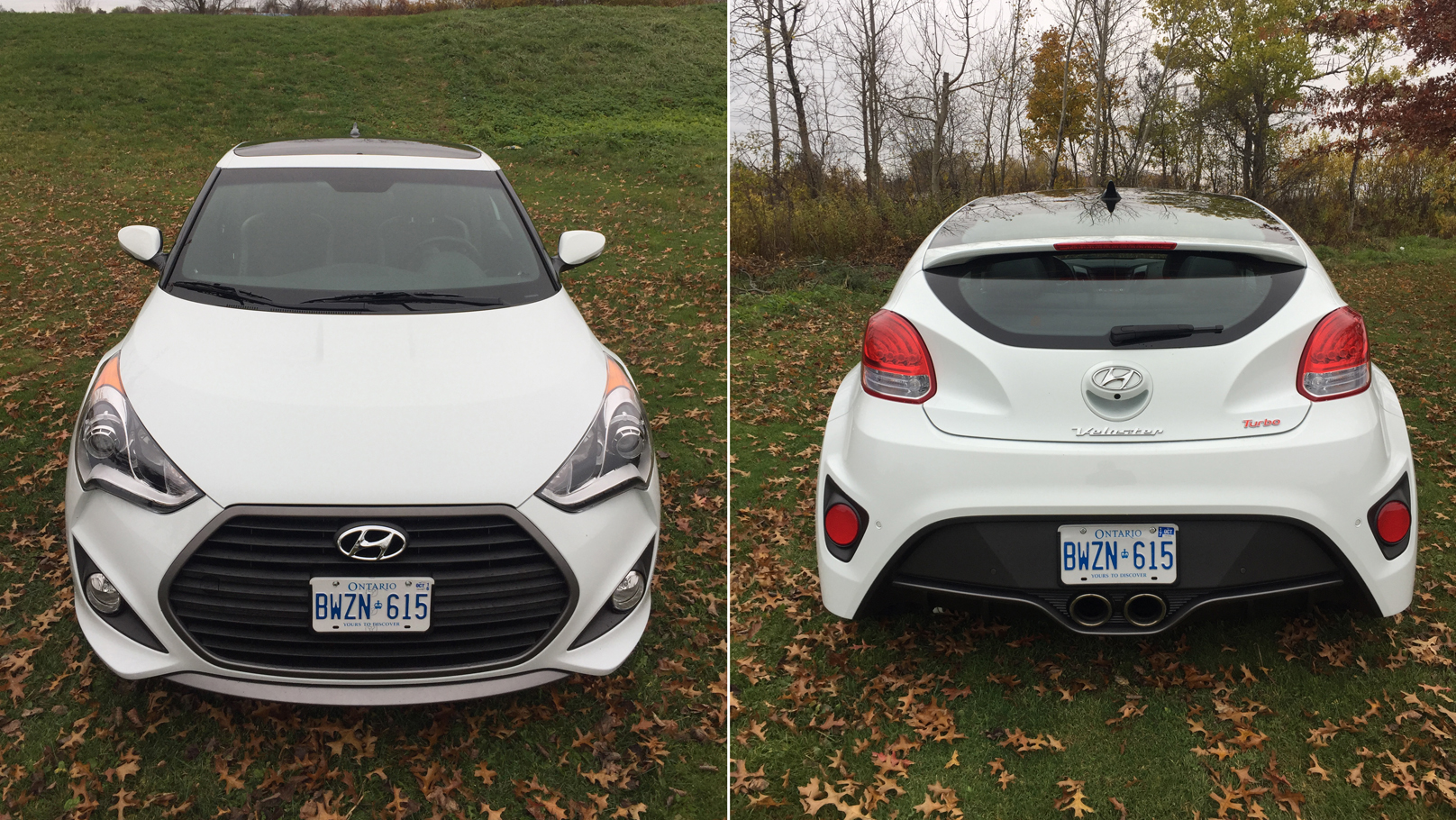 Equipped with a twin-scroll turbocharged 1.6-litre direct injection engine making 201hp, the 2016 Hyundai Veloster Turbo treats buyers to a sport-tuned suspension and three different steering modes: Comfort, Normal, and Sport. Go ahead and lock it to Sport, as that setting tightens up steering responses as best it can and affords the most road feedback of the three modes. At the mall, drivers will appreciate the tight turning circle. Newly designed 18-inch machine finished alloy wheels are shod with low profile 40-series tires, making for a firm ride. The Veloster won’t knock out tooth fillings every time the driver hits a frost heave but neither will it be mistaken for a wallowy ‘70s-era land yacht.

Nor should it. Any car featuring bold “Turbo” stitching on its well-bolstered leather sport bucket seats should be able to entertain—and the Veloster does so ably. Swinging the tachometer past 3,500rpm, a wave of boost is on tap all the way to its 6,000rpm power peak. Drivers won’t mistake it for a Golf GTI but the Veloster is neither as expensive nor as dour as the crushingly self-important German hatchback. 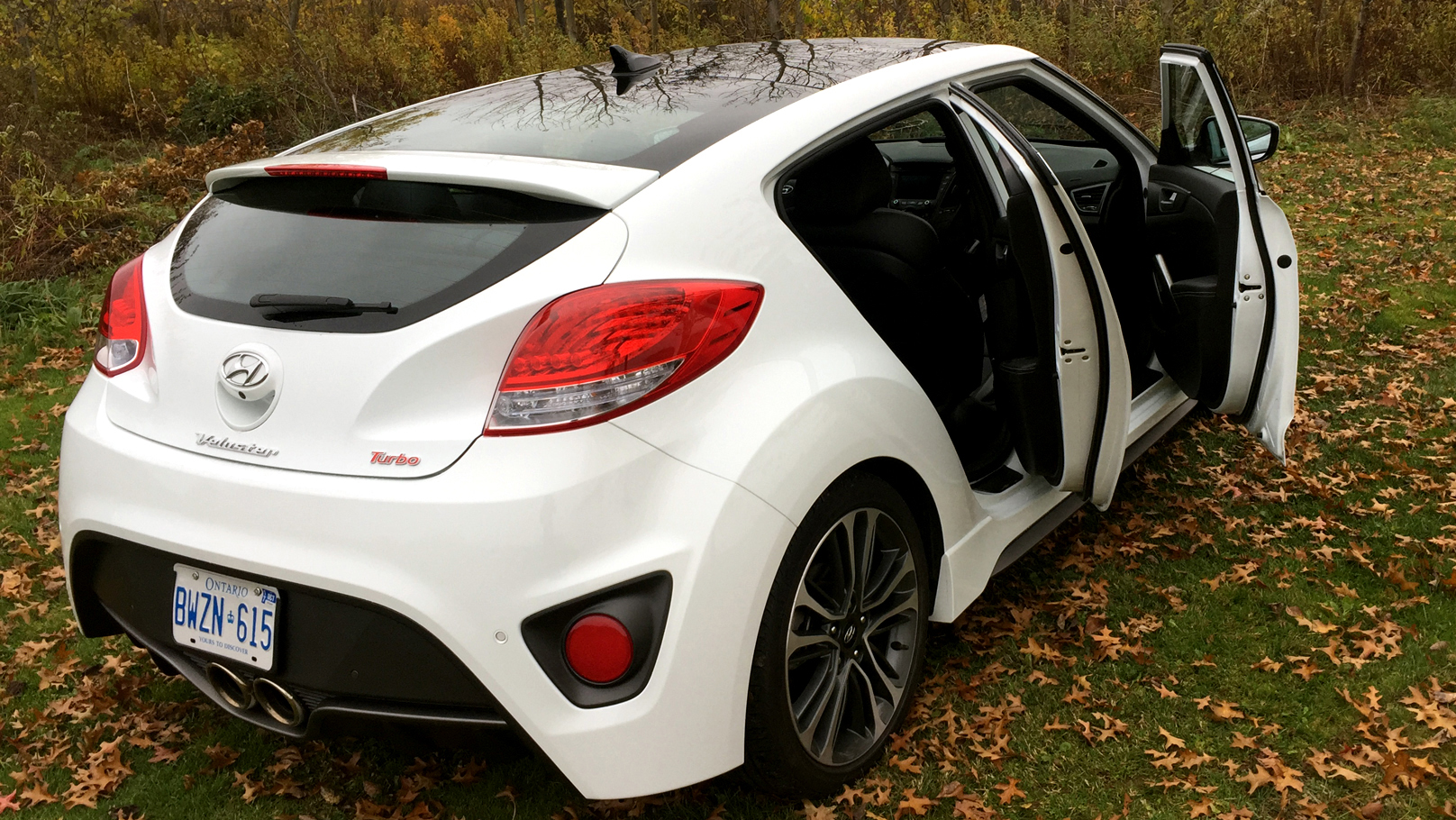 For 2016, the Hyundai Veloster Turbo introduces a 7-speed dual clutch transmission to its driveline offerings. Replacing the conventional 6-speed automatic available since its introduction, this new DCT purports to give drivers the best of both manual and automatic worlds. Programmed properly, a DCT should shift smoothly into the next gear – up or down – and take off from a standing start like a torched weasel. Hyundai’s effort does a good job at speed, accepting commands via the console mounted shifter or the flappy paddles behind the steering wheel, but it stumbles a bit during low-speed manoeuvres. First gear doesn’t engage quite quickly enough to avoid a pregnant pause when the driver eases their foot between the brake and accelerator, making navigating the parking lot a bit of a headache. Surely, the engineers at Hyundai can fix this characteristic with a simple software upgrade. My recommendation? Get the six-speed manual.

You may also like: Civic brings back the hatch

Interior controls are flamboyantly laid out, aping the style of other Hyundais introduced in the early 2010s. The cinnamon bun of a ventilation control, with a fan speed knob nested within a temperature knob, looks at first glance as if it needs to be studied like tax forms but actually works intuitively. The gigantic start/stop button is prominently mounted on the centre stack just below these controls, rather than being tucked away near the steering column as in most other vehicles. 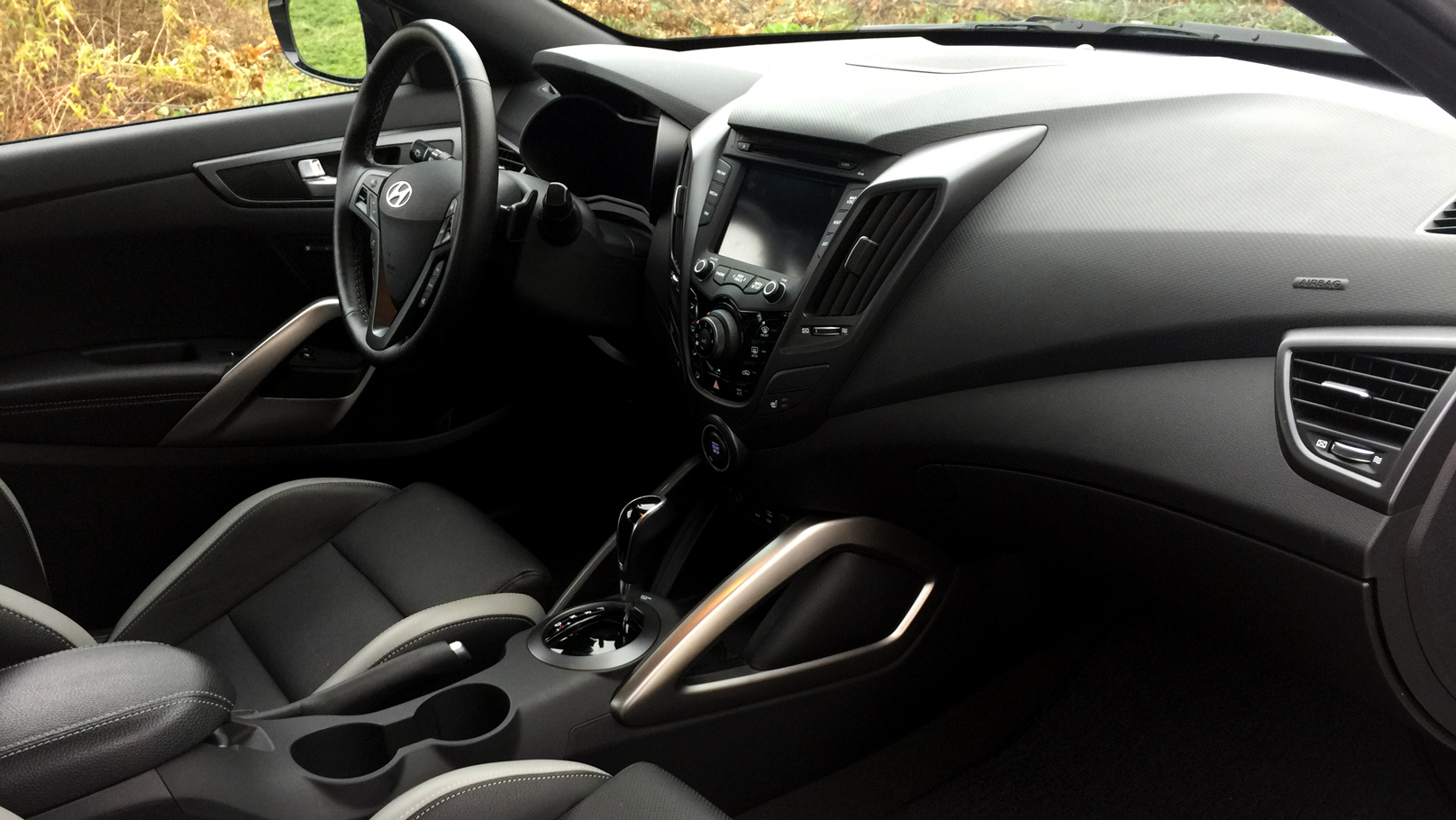 A 7.0” touch-screen, displaying an easy-to-use navigation system and images from an excellent rearview camera, resides atop the dash within easy reach of the driver. An iPhone 6 Plus paired easily and spoken commands were readily understood, despite this author’s thick Newfoundland accent. Redundant buttons for audio and Bluetooth pepper the plump, leather-wrapped steering wheel. Echoing its funky exterior styling, the Veloster’s interior has a couple of flourishes which prioritize form over function, such as the space-age door pulls which look great but hinder access to the power window switches for any driver who’s not quadruple-jointed. A clear set of gauges greet the driver, with a tach and speedo flanking a multifunction screen, which can be cycled to display fuel consumption and other trip information.

The Veloster’s tidy dimensions mean it is over a foot shorter than its Elantra brother. Yet, space inside was more than adequate upfront, with this author finding enough legroom for his 6’6” frame and enough headroom for his rapidly balding pate. Rear seat accommodations are—given the Veloster’s dimensions—understandably cozy, but the space is welcoming for elementary-school aged children. The three-door configuration makes it easy for parents to ensure the young tikes are buckled safely. An odd deletion is any sort of dome light for rear seat passengers. 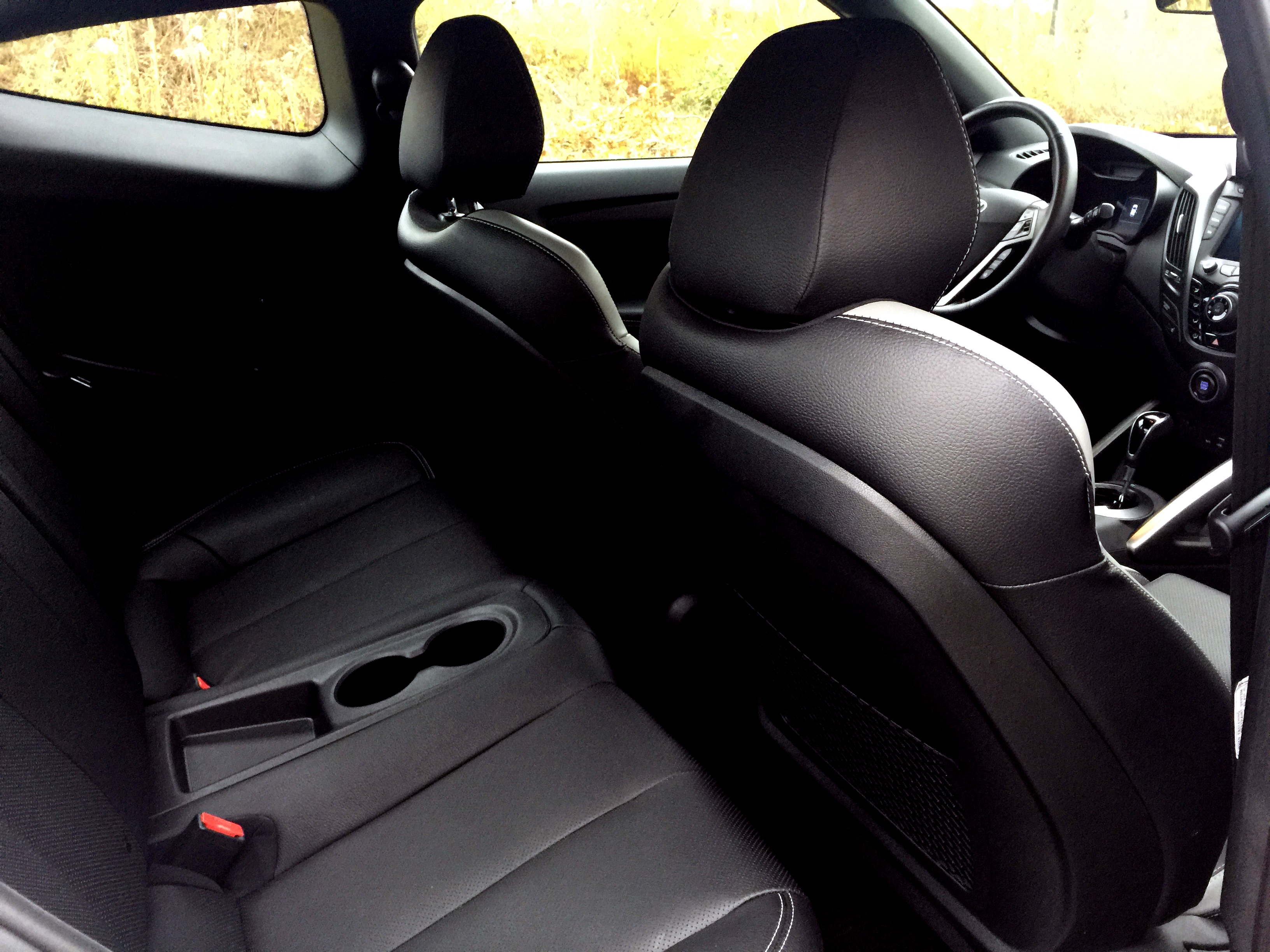 A deep cargo area measuring a full 15.5 cu ft of space is ready to swallow even the biggest of supermarket trips but the expansive glass hatch is bifurcated by a spoiler, hampering rear visibility and distorting the view of the cops on your six. Up front, projector headlamps with LED mascara are bright enough to illuminate the dark side of the moon.

Canadians who like this car’s turbo power but simply can’t fathom the quirky styling will be gratified to learn Hyundai will be offering an Elantra Sport, powered by the Veloster’s 201hp turbocharged engine. As it sits, the three-door Veloster is a surprisingly practical, high feature hatchback with sporting intentions. With those qualities, it sounds like a modern day Tiburon. Well played, Hyundai. 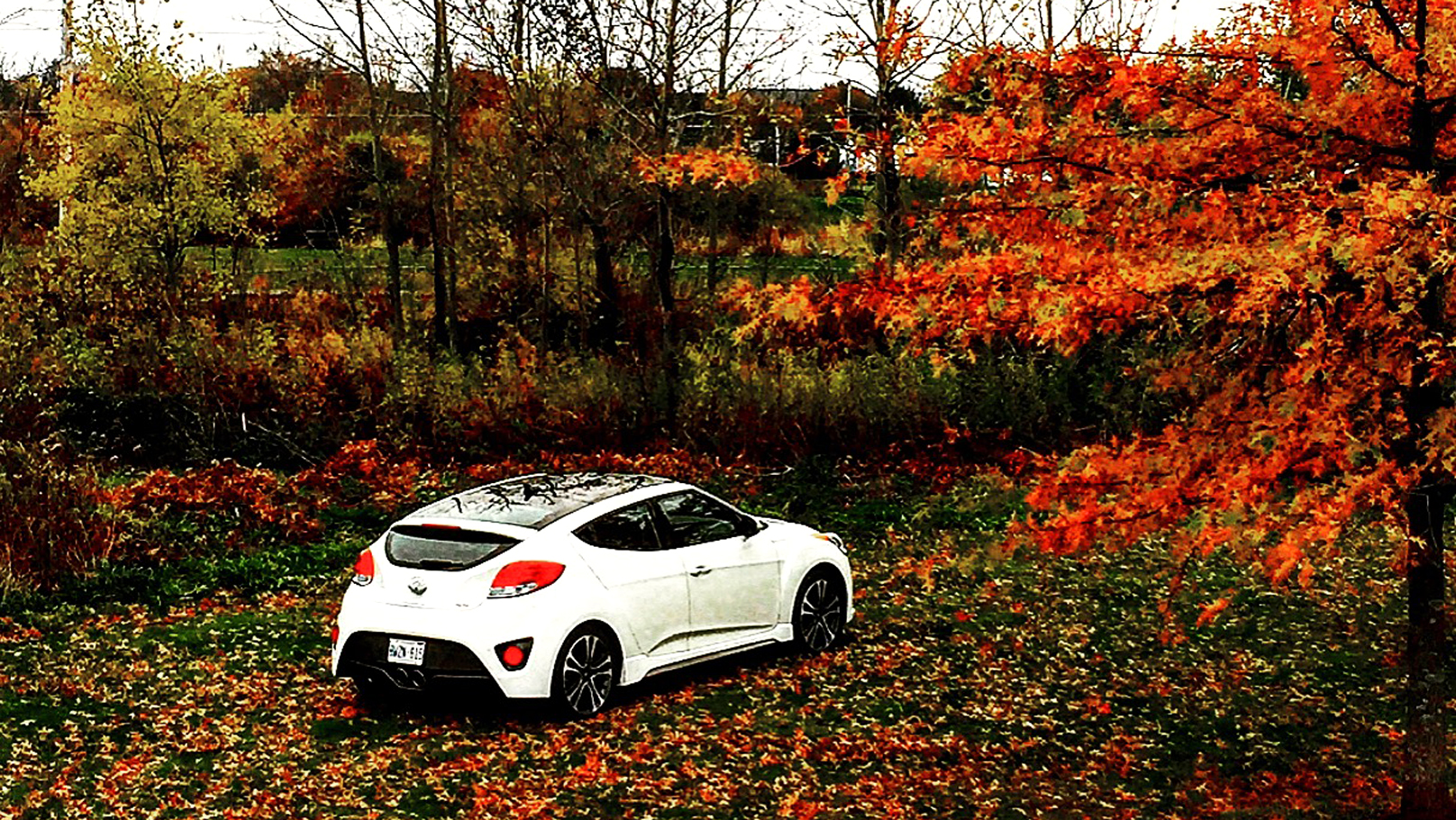