It’s hardly earth shattering news given all the turmoil right now, but it’s time to reveal our Used Vehicle of the Year.

With so many households trying to stay healthy and out of debt in an economy roiled by the coronavirus outbreak, a new vehicle is probably among the lowest of your priorities. And even when we’re all back at work again, you might not feel confident signing a big loan to drive a new car.

That’s where we come in. We kick the tires on a bunch of late-model cars and trucks every year and pay particular attention to what vehicle owners have to say about their experiences. Reliability is a major factor for many car shoppers, especially when buying second-hand.

In determining our pick, we remembered that the most trouble-free automobile sold in Germany in 2017 was the Hyundai i30, according to J.D. Power and Auto Bild magazine. Two-year-old models had the lowest incidence of problems at 72 per 100 vehicles (by comparison hometown favourite Volkswagen ranked 13th on the list of manufacturers).

Canadians know the i30 as the Elantra GT, the product of Hyundai’s Design and Technical Centre in Russelsheim, Germany. It helped elevate the Hyundai brand in the minds of skeptical European car buyers and augmented the Elantra lineup in Canadian showrooms, too.

“I was a BMW owner fed up with (the) costs to own. Although this is no BMW, this car is a lot of fun. Feel solid and handles pretty well for a car in this segment,” the owner of a 2013 model remarked online.

Lots of drivers agree it’s a well-executed hatchback that seems to do everything well, making the 2013-2017 Elantra GT our Used Vehicle of the Year for 2020.

The Elantra GT joined Hyundai’s Canadian lineup in mid-2012, replacing the late and dearly missed Elantra Touring (which was the first-generation i30 wagon). The GT arrived from South Korea solely as a five-door hatchback, while Europeans got their three- and five-door hatches and wagons from Hyundai’s factory in the Czech Republic.

The GT’s widespread use of high-strength steel – Hyundai is the only global automaker with its own integrated steel plant – provided a 37 per cent increase in body stiffness compared to the old Touring model. The Elantra GT is lighter than its competitors at just 1263 kg, while offering more interior room than the Ford Focus, Mazda3 or VW Golf. 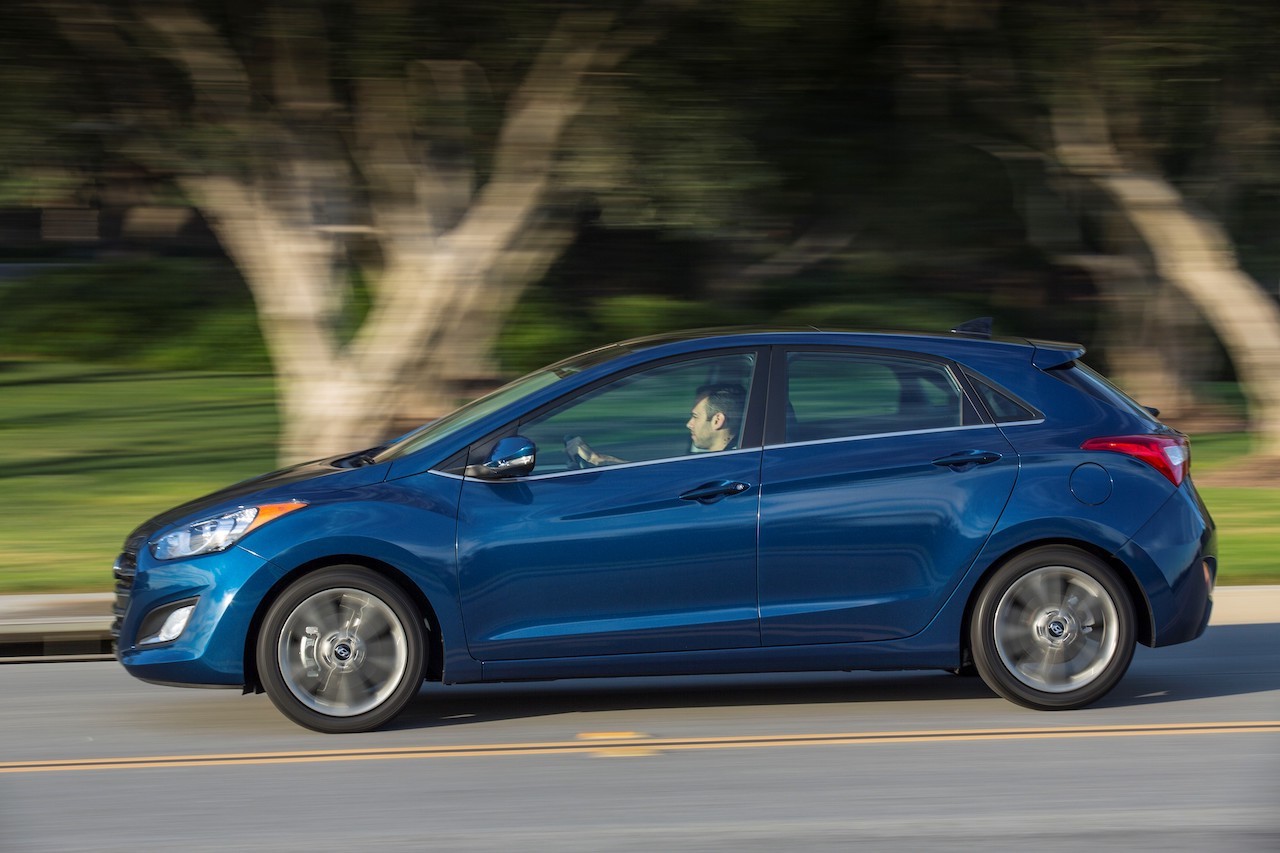 The GT’s dimensions differed from those of the Elantra sedan: the wheelbase was 5 cm shorter and the car was 23 cm stubbier in terms of overall length, but marginally wider. The suspension was tuned to be firmer with higher spring rates, Sachs monotube rear shocks and a stiffer twist beam with a thicker anti-roll bar. The electric-assist power steering features three settings (Normal, Sport and Comfort) that varies the amount of power assistance for the driver.

The 60/40-split rear seatbacks and seat bottoms fold away VW-like to expand the cargo hold, and there’s a shallow storage bin under the cargo floor. Rear-seat shoulder room and legroom are reasonably generous. 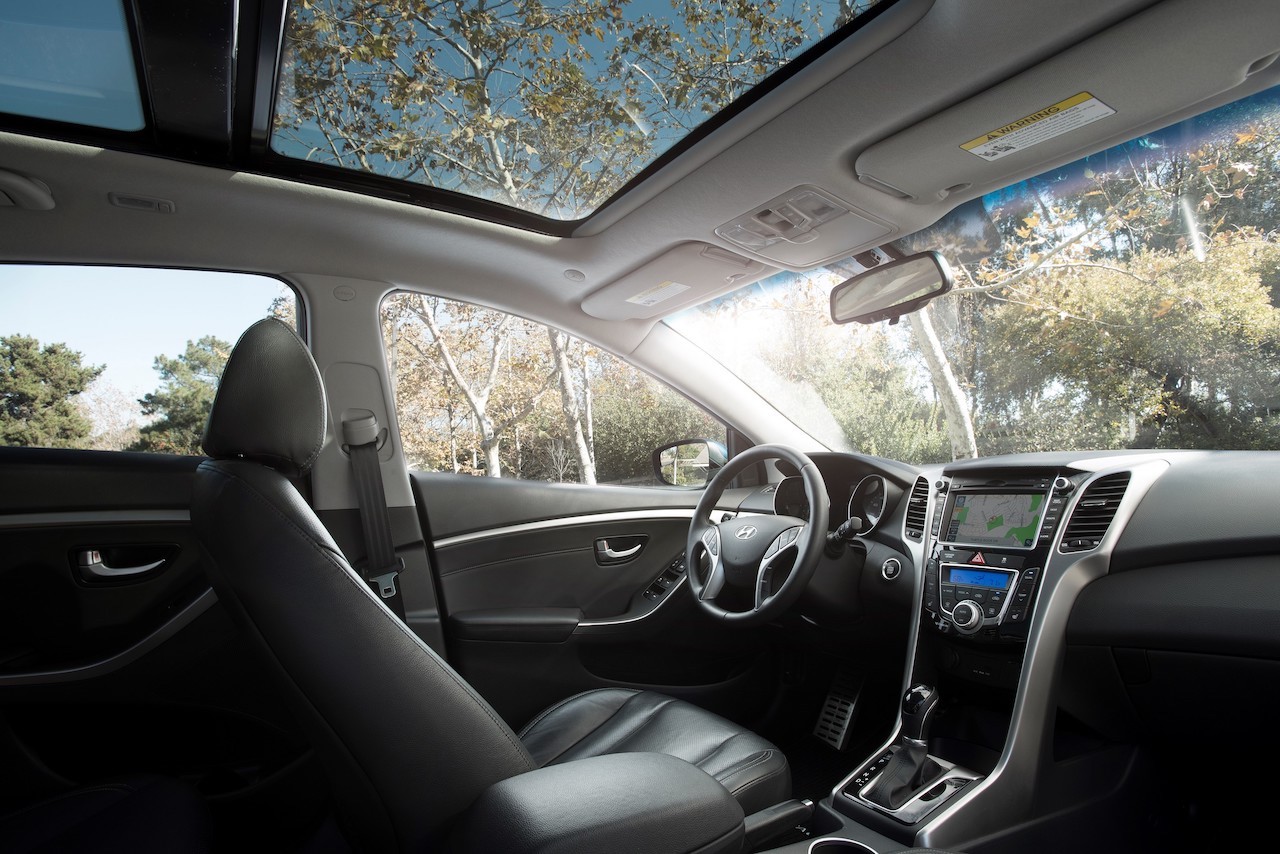 “Surprisingly, there is a ton of headroom for a 6-foot-2 guy! Cargo space, lots of it, especially with the fold-flat seats. Overall, this vehicle is very handy and practical with a slightly sporty flair,” an owner commented online. “And the nice thing is that it doesn’t look like a regular Elantra, so people often ask what it is.”

Front side airbags, side curtain airbags and, in a nod to its European origins, a driver knee airbag are all standard. The Elantra GT earned a top five-star rating for overall collision protection, with four stars being awarded for frontal impact protection and five stars for side-impact protection in U.S. government testing.

Powering all GTs in 2013 was a single engine: the same all-aluminum 1.8-L DOHC four cylinder that moved regular Elantras. Output remained pegged at a ho-hum 148 hp and 131 lb-ft of torque, directed through a standard six-speed manual transmission or optional six-speed automatic. Hyundai got an earful from critics who expected more zoom from a car wearing a GT badge.

As a result, a new direct-injected 2.0-L four-cylinder making 173 hp and 154 lb-ft of grunt replaced the smaller motor in all 2014 to 2017 GTs. The added power was derived from the extra 0.2 litres of displacement (thanks to longer piston travel) and higher compression made tenable by the cooling effects of direct fuel injection. Also available was a newly optional sport-tuned suspension to sharpen the handling further. 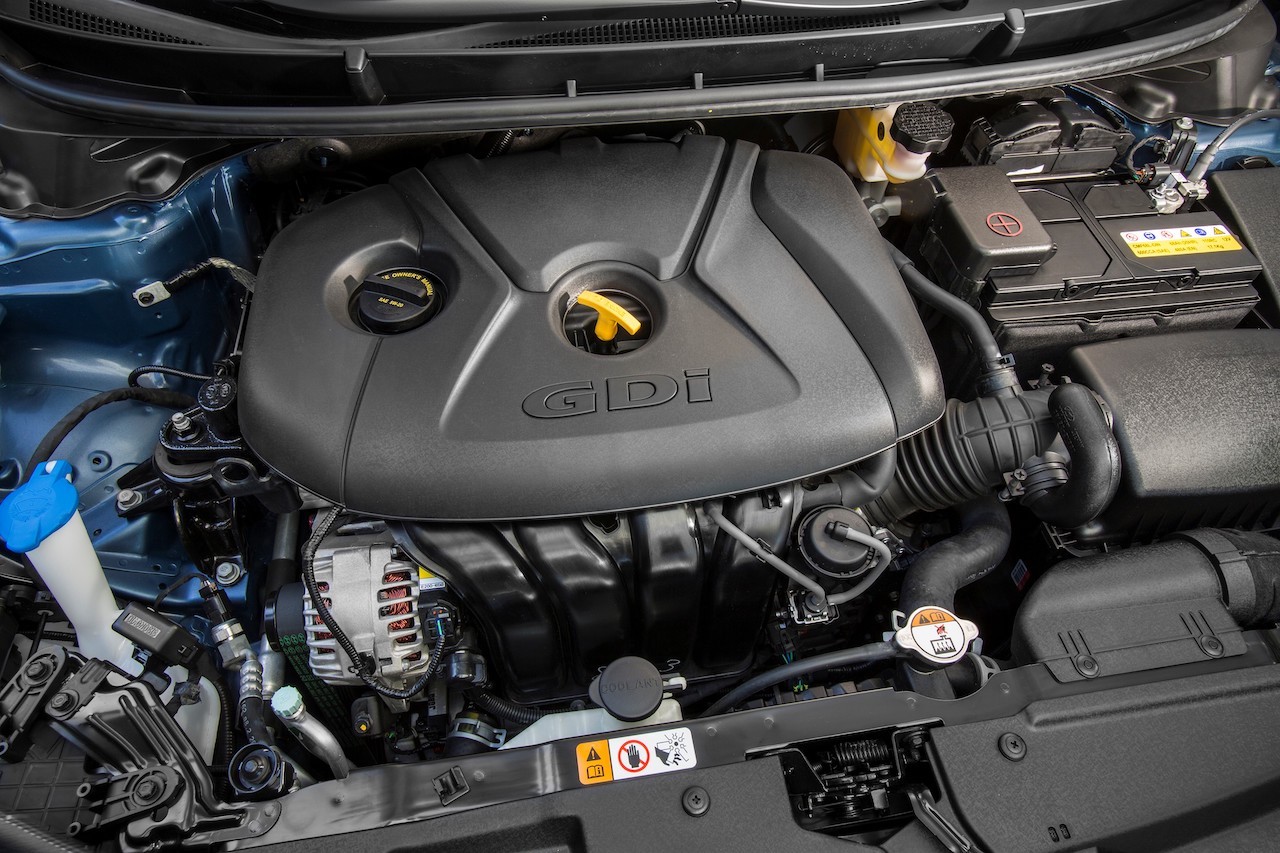 For 2016 the GT got fresh front-end styling and a retuned power steering system for better feel. The optional Tech package included an upgraded navigation system, additional features for the Blue Link telematics system and ventilated front seats. The Tech package added Apple CarPlay and Android Auto functionality in the 2017 models, the last year of the second-generation GT.

Equipped with the 148-hp engine the 2013 GT is hardly an exhilarating drive. Zero to 97 km/h comes up in an uninspired 8.3 seconds with the manual transmission. Performance improved with the 2.0-L direct injection (GDi) engine in 2014, taking 7.9 seconds to attain highway velocity with the automatic. Expect 7.5 seconds, more or less, with the manual gearbox.

“The 173-hp engine provides very good performance. Never feels like the car is ‘straining’ like many small cars with less horsepower do,” reads one driver’s post. “The handling is very sports-car like: very quick and precise. The car’s wide track and coil spring suspension design make an effective package.” 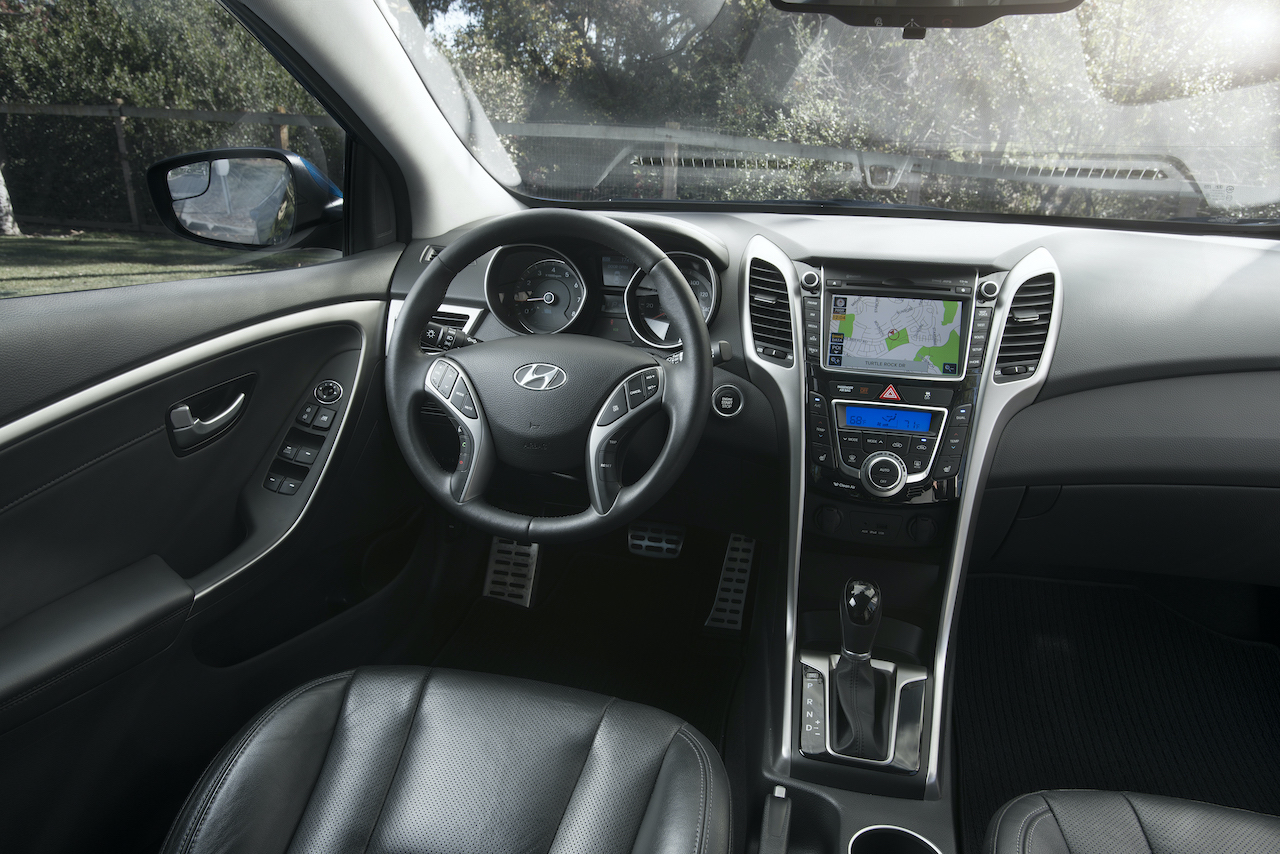 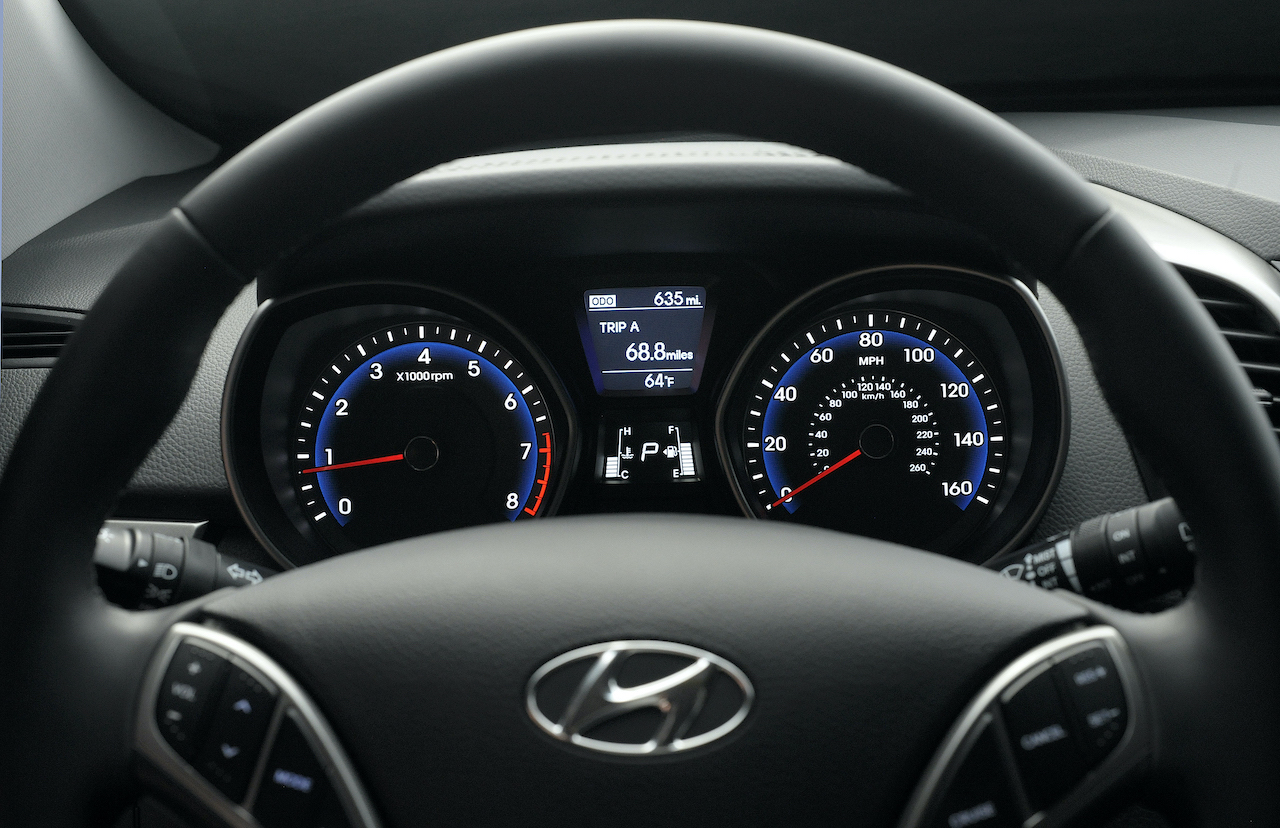 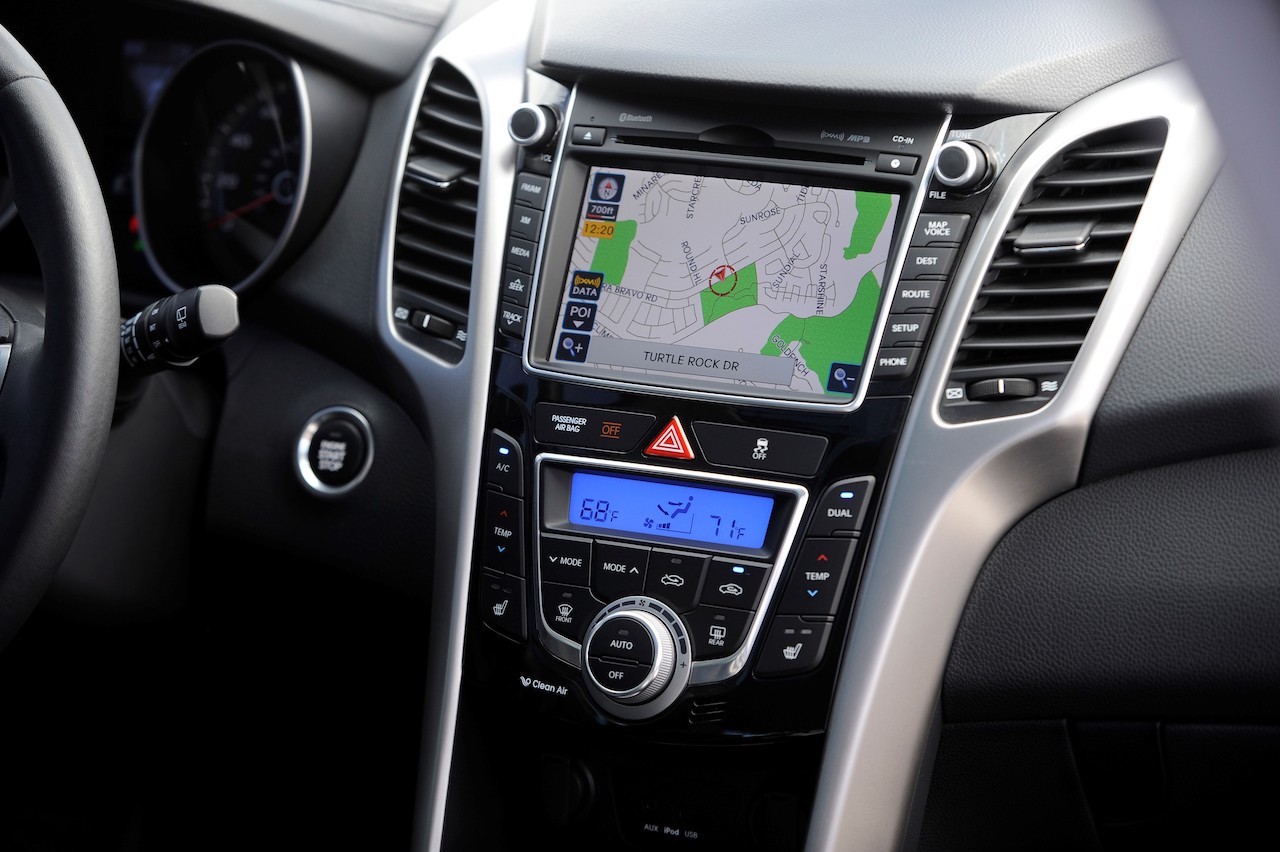 The suspension is laudably composed over broken pavement and when riding over large bumps and potholes. Many compact economy cars react harshly to road irregularities, but the GT rides and handles much like a larger, more refined sedan. It’s also noticeably quiet for a hatchback and its doors close with a reassuring “thump.”

The one big letdown has been the GT’s thirst for fuel, some owners complain. What had been advertised as another thrifty econobox from Hyundai is, in reality, a bit of a heavy drinker. Drivers reported average consumption of 9.0 litres/100 km (31 mpg) in mixed driving with the 2.0-L four cylinder.

“The Elantra GT has a much more substantial feel and solidity with a kinship above its bracket. Other than brake work and oil changes, it’s been repair-free,” sums up the owner of a 2016 model in rural eastern Ontario.

The single biggest annoyance for GT owners is the frequency of tire failures on models that wear the 17-inch alloy wheels and matching low profile (45-series) tires. The short sidewalls are prone to bubbling and bulging, a considerable hazard. The standard 16-inch tires are more durable and provide a more forgiving ride, owners say. If you must have 17-inch alloys, some suggest swapping the Korean tires for sturdier European rubber. 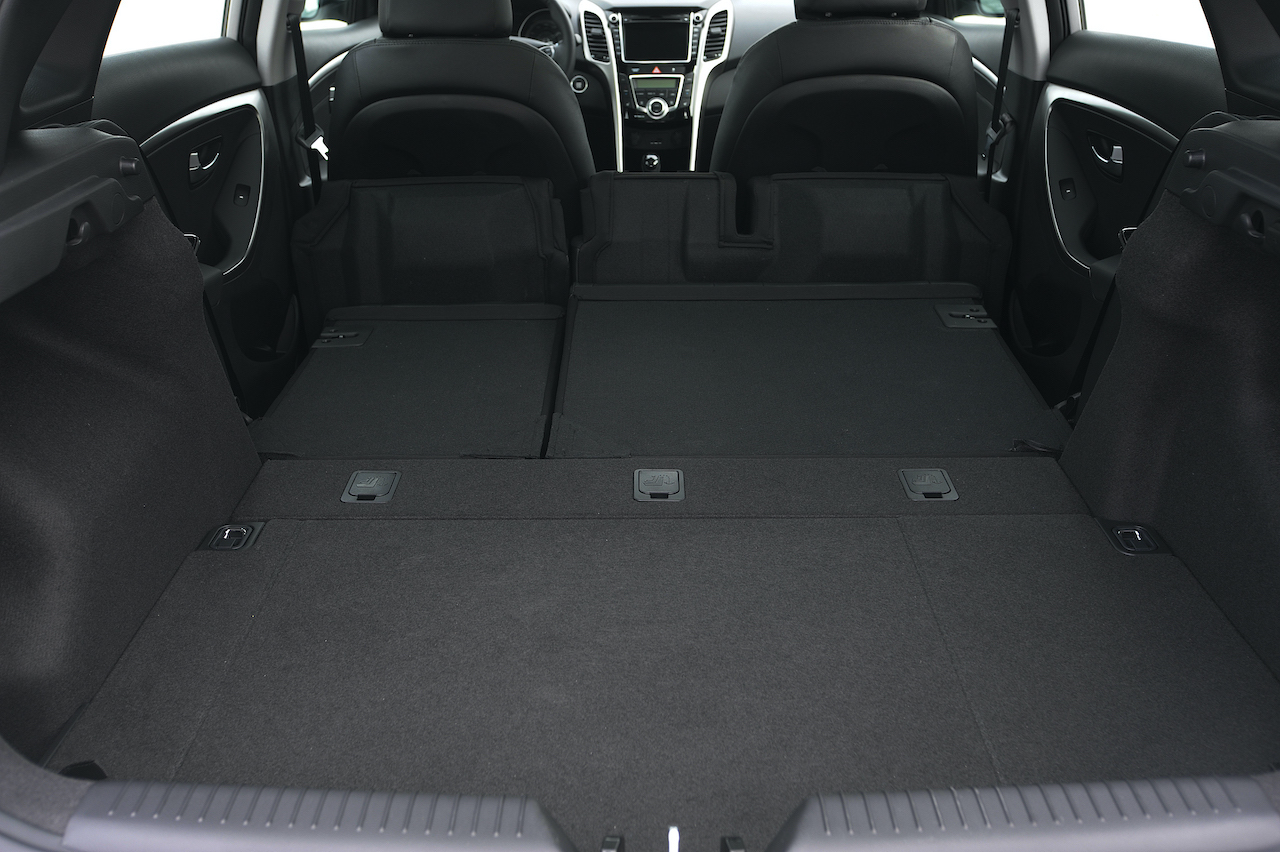 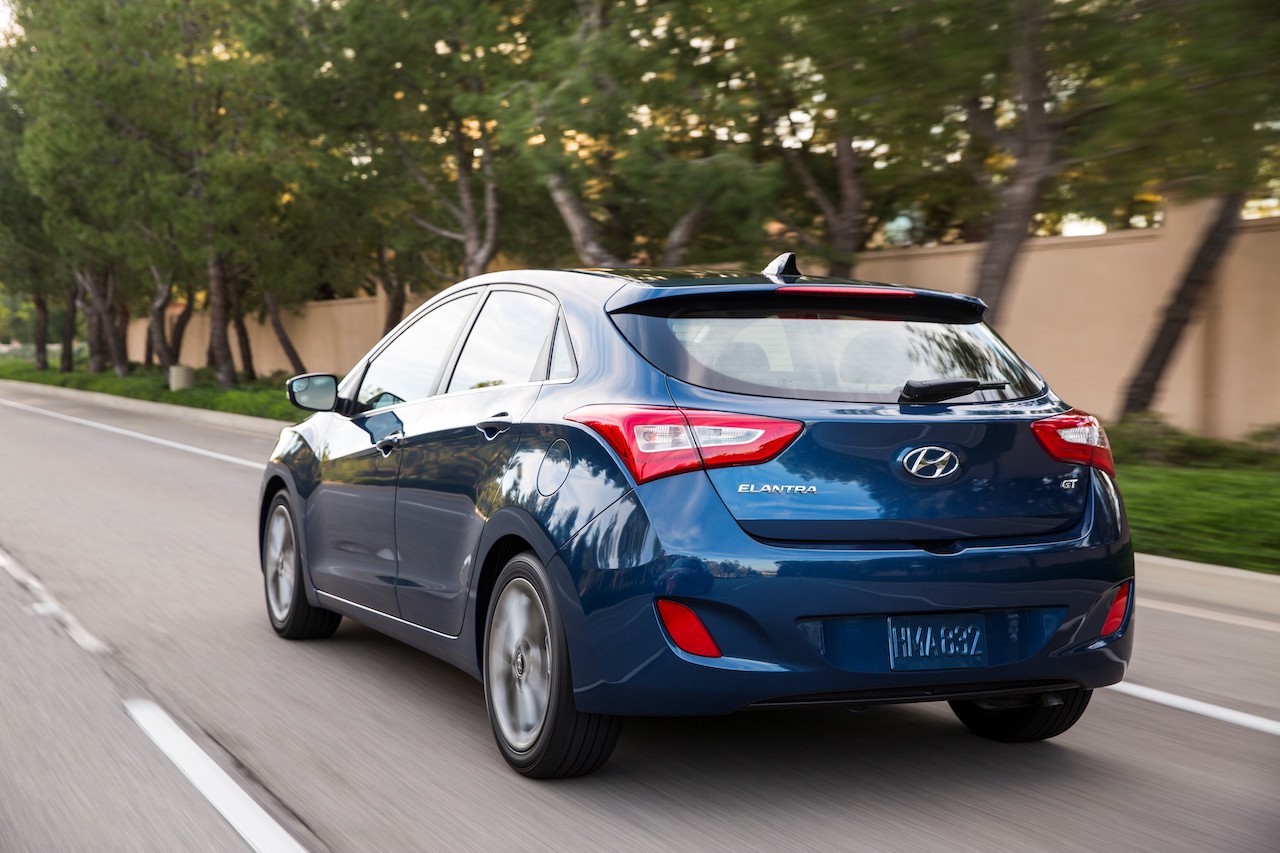 There have been reports of alignment and steering issues, though most complaints have implicated the sedan models and not the GT – although a few have reported worn steering couplers that warrant replacement.

Others talk of ticking engines, prematurely worn wheel bearings, and some fast-wearing clutches and clutch slave cylinders. In fact, the one weakness of the Elantra GT maybe its manual transmission, which appears to have hydraulic cylinders and bearings that wear out quicker than those in the gearboxes offered by Honda, Mazda, and Volkswagen. By comparison, Hyundai’s conventional six-speed automatic transmission has been largely faultless.

Overall, the Elantra GT is a markedly different animal compared to the rest of the Elantra lineup. Bred to compete with the European nameplates – but with reliable Asian componentry – it’s an uncommonly good car for value-conscious Canucks. And it’s our 2020 Used Vehicle of the Year. 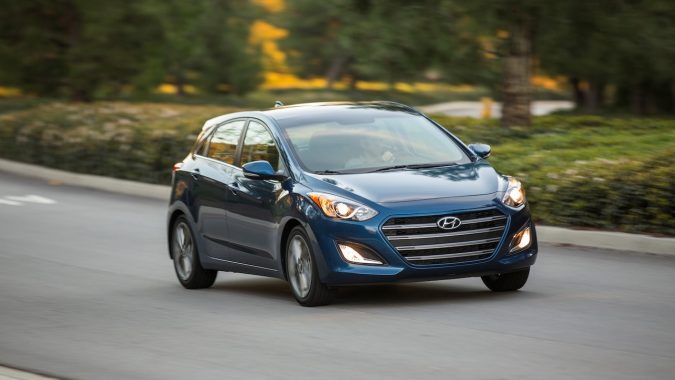 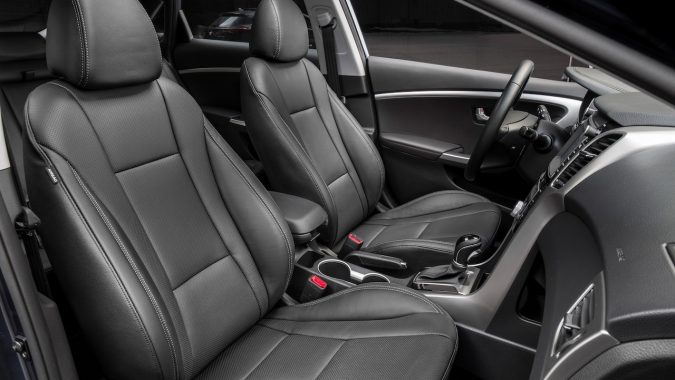 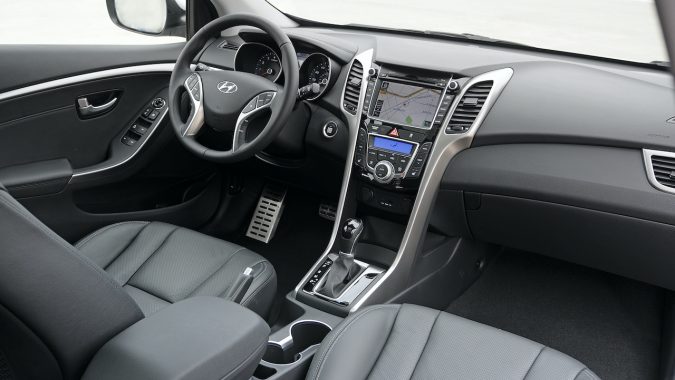 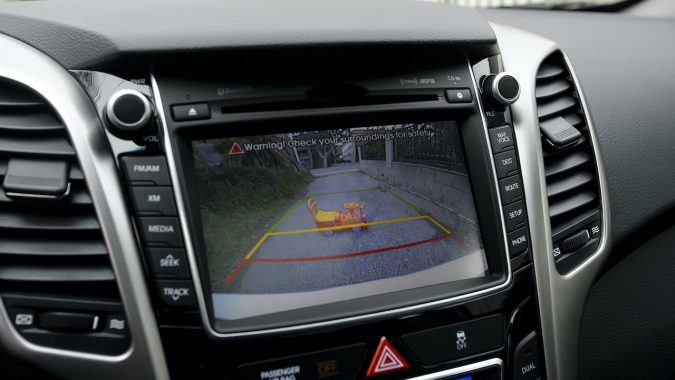 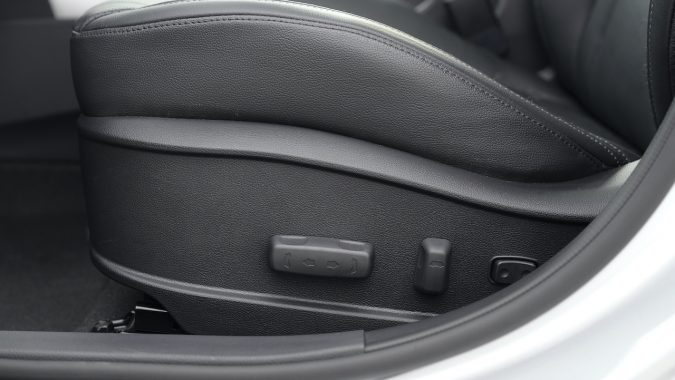 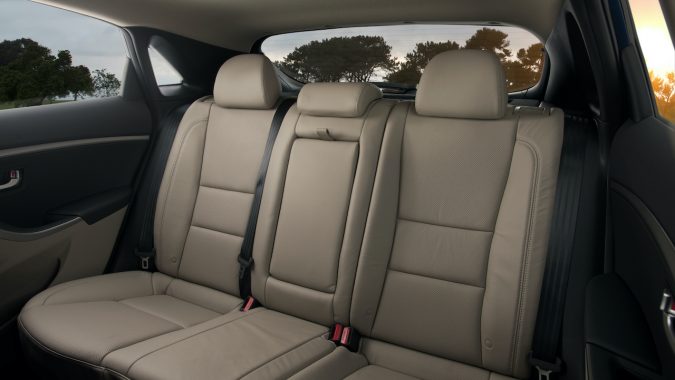 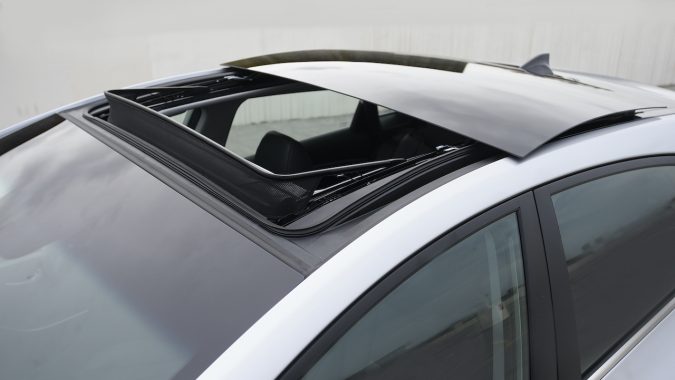 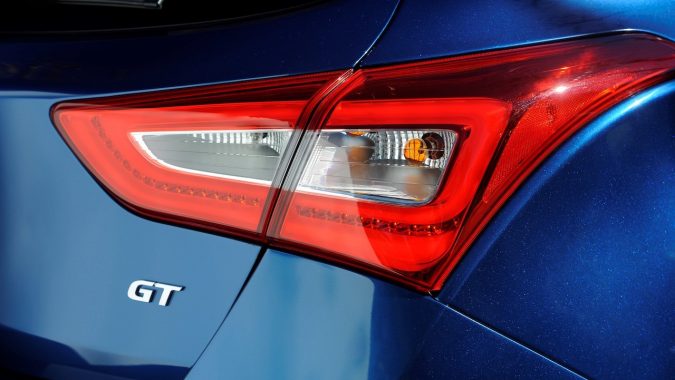 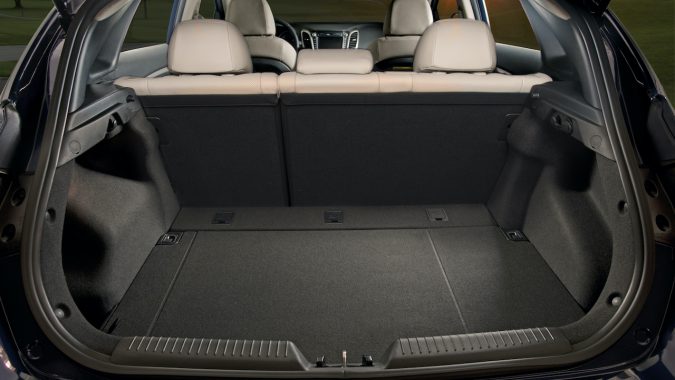 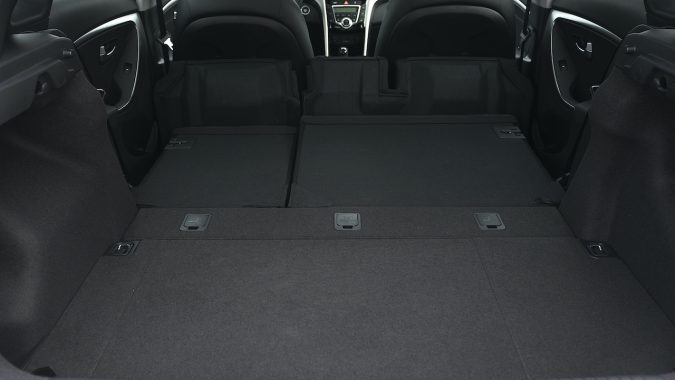 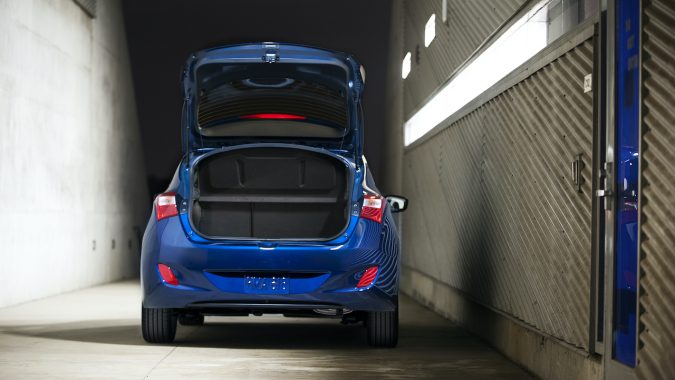