Two Porsches are Better Than One

EDINBURGH, SCOTLAND—I went to Scotland, the land of my forefathers, to try out two new 2020 Porsche sports cars — the 718 Spyder and the 718 Cayman GT4 — and the limo driver, an older guy who’d picked us up at the airport, had asked our names.

“Keep an eye out for those Campbells, laddie,” he said. “You don’t want to be murdered in your bed, do ya?”

Apparently, something that happened in 1692 (known as the Massacre of Glencoe, where troops led by a commander named Campbell had dispatched a gang of thugs belonging to Clan Donald while they were asleep) remains a subject of mirth in that northern clime. Although my late father, a fan of genealogy who’d traced our family tree back to that century, had drilled that particular bit of history into my head by the time I was four, I really hadn’t paid all that much attention to it since.

“Campbell,” he said, and he laughed so hard I thought he was going to drive off the road.

Now, if we had gone off the road, chances are we would have hit a sheep. They are everywhere in Scotland and in large numbers. Unlike those in North America that stick together for fear of predators, there are no coyotes or wolves to worry about in Scotland, so the animals will occasionally wander off by themselves while grazing. Not much seems to faze them, either; when we stopped our Spyder on the side of the road to take pictures, only a couple were curious enough to even look up while the rest just kept on munching.

Our Porsche test — through the countryside in the 718 Spyder convertible one day and at the Knockhill Racing Circuit the second, where we could really let the 718 Cayman GT4 stretch its legs — was great fun. A thrill at the race track was meeting and talking about Formula One racing with retired Red Bull and Porsche sports-car driver Mark Webber, who is one of the most open and honest racing drivers I’ve ever met. Asked why he retired from F1 when he did, his answer was short and to the point: “I couldn’t do it anymore.” Ask the same question of Mario Andretti these days, and he’ll want to know what time the first practice starts and whether he should bring his helmet. And he’d be serious. 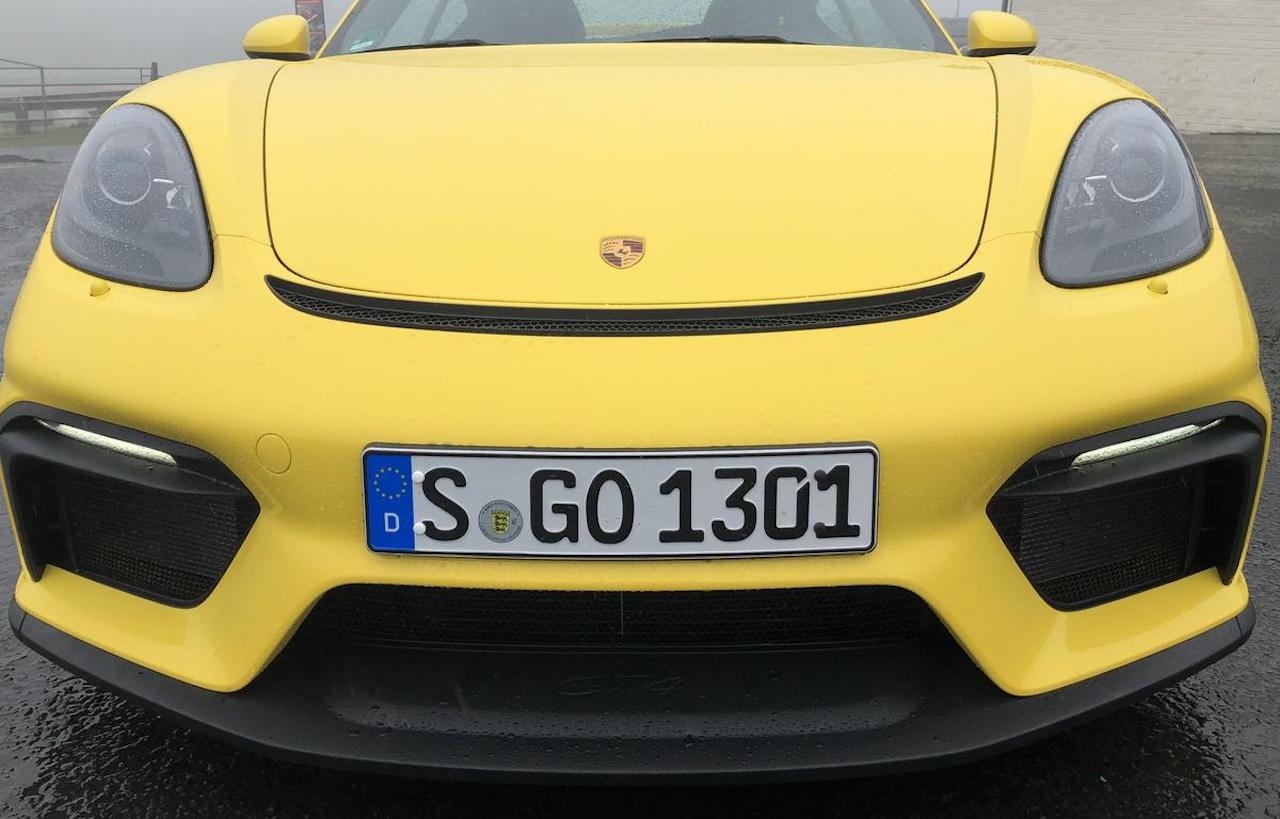 The reason racing is part of this report — other than we tested a car at a racing circuit and talked to Webber, a racer — is because these two new Porsches are for people who like to drive cars, and like to drive them fast. These are not family cars like the 2019 Porsche Macan S that I drove around Newfoundland earlier this year. These are road-hugging, fast-cornering, kick-in-the-pants powerful racing cars.

I have to say that these aren’t racing cars, but they are, if you catch my drift. For people really serious, you can buy a Clubsport package for the GT4 that has a fire extinguisher, a roll bar that can be expanded into a full roll cage and a six-point safety harness that’s compatible with the HANS safety device. So …

You can drive them on the streets of the city and out in the countryside, enjoying nature as you drive by, but chances are if you buy either one of these machines, you will want to take it to a track one day and turn it loose. You can even buy a model eligible for national and international racing competitions. So, let’s call a spade a spade, shall we?

They both boast a 4.0 L six-cylinder normally aspirated boxer engine, driven by a six-speed manual transmission. That motor, which generates 414 horsepower and 309 lb.-ft. of torque when revving between 5,000 and 6,800 rpm (both these cars sound wonderful, by the way) is a member of the same family as the turbo engines that are currently in the 911 Carreras. Both cars (each weighs 1,420 kilograms) can go from zero to 100 km/h in 4.4 seconds with the Spyder reaching a top speed of 301 km/h and the Cayman GT4 topping out at 304. 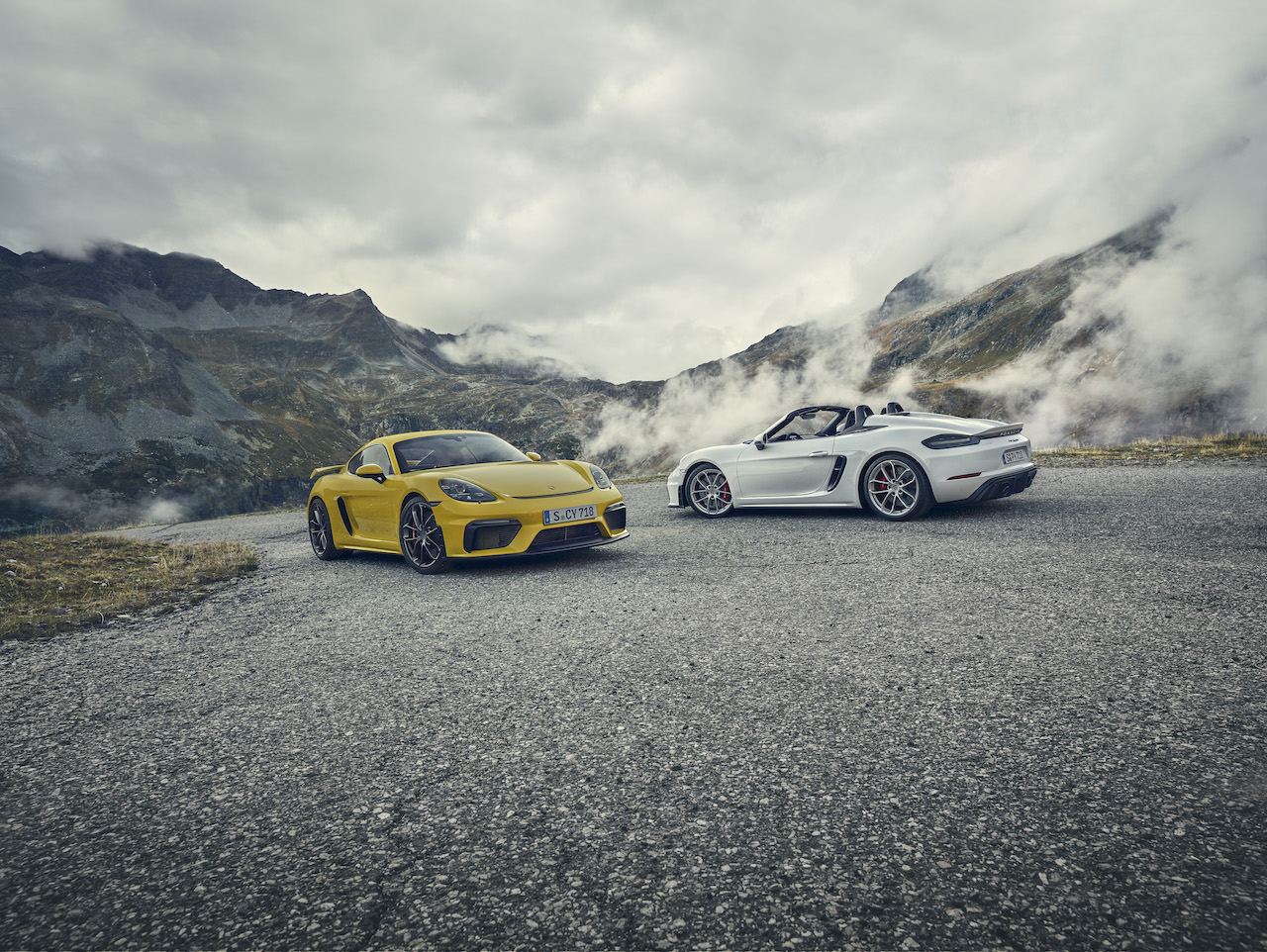 But, conservation is also top of mind with Porsche — the automaker has an electric car coming out soon and already produces hybrids — and its adaptive cylinder control reduces fuel consumption. Adaptive cylinder control? That’s when the engine is in part-load operation and the injection process is temporarily interrupted in one of the two cylinder banks. In addition, Piezo injectors (which control fuel delivery better) are being used in these cars for the first time in a high-revving engine, thus supporting an emissions-friendly combustion process. And, like many other manufacturers, the stop-start function is also on these cars.

(I had a fascinating conversation about future propulsion with Dr. Frank-Steffen Walliser, who’s vice president of product lines for the 911/718 Porsches, and he says a big change is on the horizon. As his first language is not English, I have taken the liberty of smoothing out quotes that I recorded.

(“A big cultural change is coming and we have to be honest: sports cars will be electric sports cars. Yes, I believe that the 911 will be the last to go, but electrification is coming. It will be a fast car and it will handle well but it won’t be the same. Will these cars (the 718 Cayman GT4 and the 718 Spyder) disappear in the next five years? No. Will we have a dual world? Possibly. Whatever, it’ll be different. As long as we don’t try to hang on to the old ways — by using artificial sound, or something — then we’ll be fine.)

(“The sound of the engine is something that will not be there in an electric motor; the sounds will be different — not bad, but different. I just came from Goodwood and I saw the hill climb. There was an electric car and you don’t turn your head because you hear it coming; you see it on the video screen. But the head-turners were the 3.5 L V10s. One thousand rpms going up the hill and It was incredible. But you can’t say one is good and the other bad. They’re just different.”)

Now, cars that stick to the road have to have help other than 20-inch wheels and wide tires. The 718 Cayman GT4 has 50 per cent more downforce than its predecessors because of improved aerodynamics, plus a new single-chamber arch rear silencer that has created space for a functional diffuser. The fixed rear wing helps too, and between the two — the diffuser and the wing (and the fully panelled underbody) — that 50 per cent additional downforce is achieved.

Moving right along, the Spyder is a convertible and can be driven with the soft top on or off. It’s suitable for everyday use in the city, and maybe when it’s raining, but for drives in the country when the sun’s shining and you want the open air because its hot, it can be stowed under the rear deck lid. The Spyder is different than the GT4 in that when the car hits 120 km/h, a rear spoiler pops up automatically. 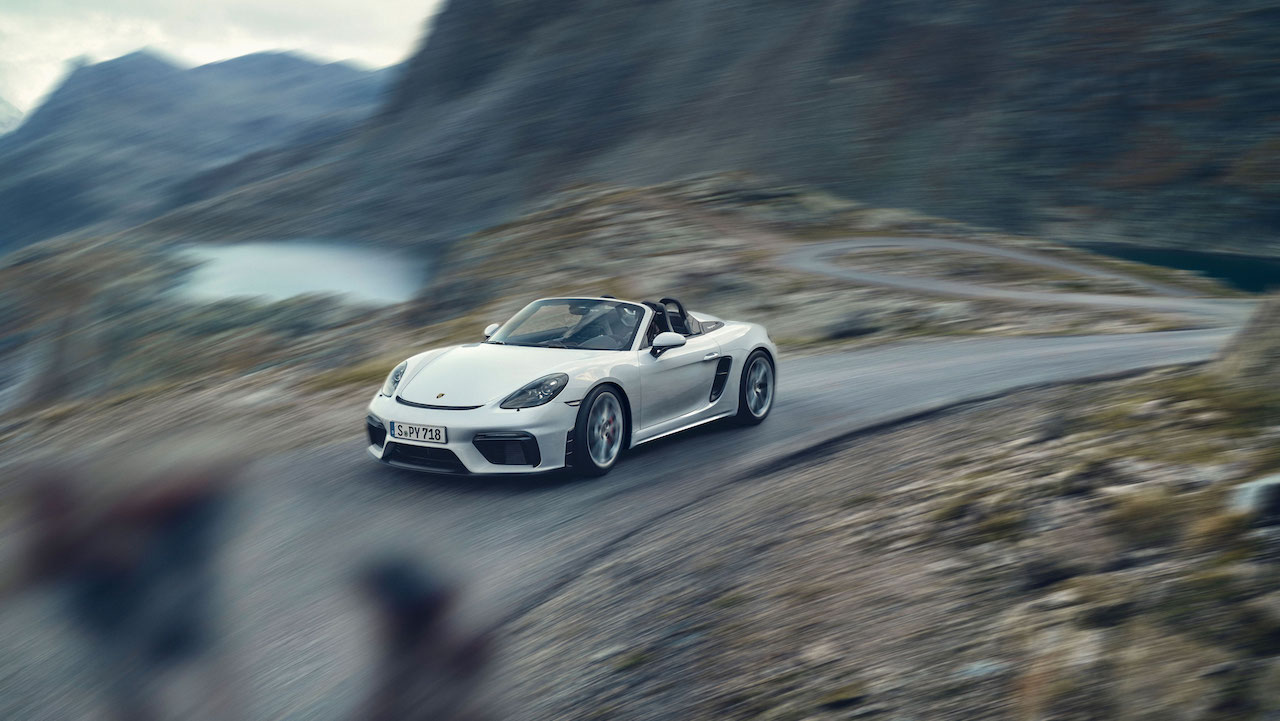 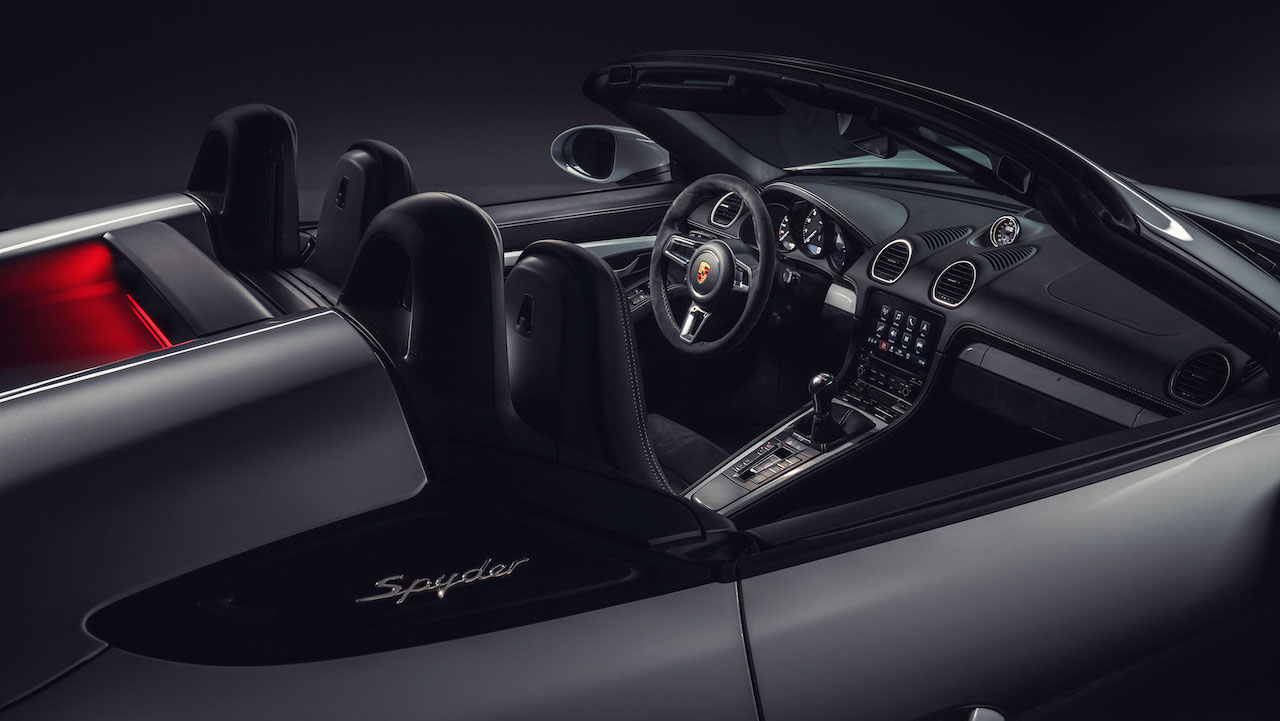 The Spyder benefits from the high-performance GT chassis of the Cayman GT4. Its lightweight spring-strut front and rear axles make use of racing technologies. When you start talking about this stuff, it’s highly technical, so I am just going to quote from Porsche directly:

“The Porsche Active Suspension damping system with 30 mm lower suspension lowers the centre of gravity and improves lateral dynamics potential. It is specifically designed to use on the race track and makes the handling characteristics of the Cayman GT4 sharper. The Spyder also benefits from this design. The Porsche Stability Management operates with even greater sensitivity and precision but can optionally also be deactivated in two steps. Porsche Torque Vectoring with mechanical rear differential lock further enhances the longitudinal and lateral dynamics and cornering performance.”

Got that? There will be a test.

The high-performance brakes have large aluminum fixed calipers, which are suitable for track driving. Ceramic brakes are available as an option. The Spyder runs on ultra-high performance tires specially adapted by Porsche. They are part of the overall package (shortened gear lever, 360 mm diameter steering wheel) that makes the Cayman GT4 literally fly around the Nurburgring. The lap time around the classic 20.5 km Nordschleife circuit is seven minutes, 28 seconds, which is more than 12 seconds faster than its predecessor.

That might have been the case at the Nurburgring. At the Knockhill circuit — a short, 2.4 kilometre track — I was not setting any speed records (which, incidentally, for a car is 51.521 seconds). The GT4 I was in had bucket seats (sport seating is standard), so after I was buckled in and got going, I was chasing an instructor named Matthius who, via walkie talkie, kept telling me what to do. I, of course, think that I am the reincarnation of Bernd Rosemeyer, so I totally ignored him. Which means I was messing up most of the time. The fact that the track was wet didn’t help matters but Lewis Hamilton I am not, so I was intimidated by the moisture.

As I neared the end of my session, I discovered that with the exception of the hairpin, I could set good lap times by essentially leaving it in third gear, but by the time I got into a rhythm, I was directed off the track and I never got to show what I could really do. But the car felt incredible under me and I hope I get another shot at driving the thing in anger one day.

Saying I was impressed with these cars would be an understatement. These are Porsches, for goodness sakes, and I would expect nothing but the best. The ride is as smooth as silk; there is very little play in the steering, so if you turn the wheel to the right, or left, that’s where you’re going. The trick, when you’re on a straight stretch, is to not move your hands at all. The seats are comfy, the leg room is ample and once you get rolling, you really do hate to stop. If you like lightning under your right foot and glorious thunder in your ears, one of these cars — ah, go ahead; take the two of them — is for you.

Interested? The Spyder and the Cayman GT4 are available to order now. Canadian pricing starts at $110,500 for the Spyder and $113,800 for the Cayman GT4. There are, of course, Porsches for half that amount, but if you’re looking for a performance sports car, you can’t go wrong here. 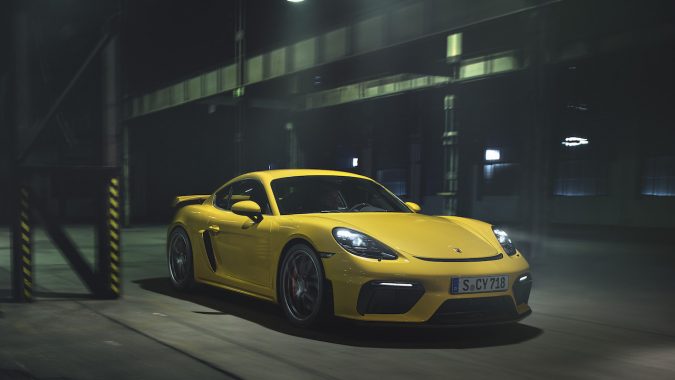 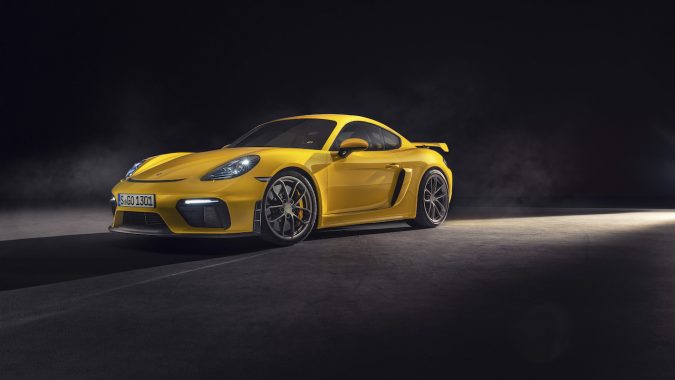 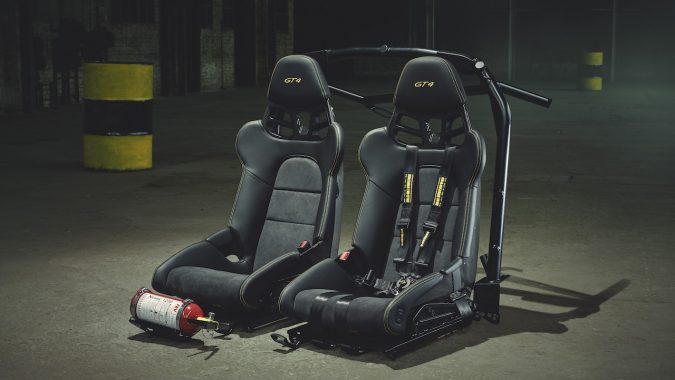 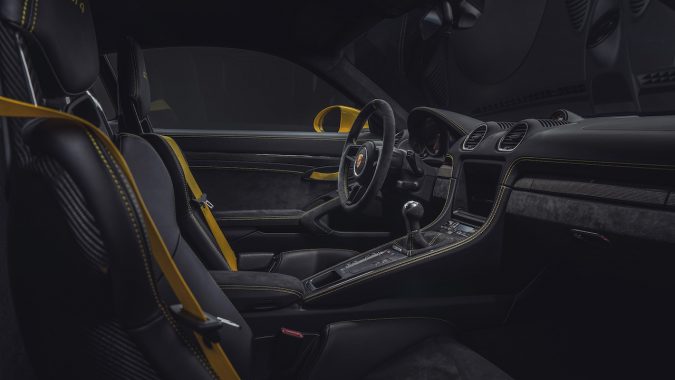 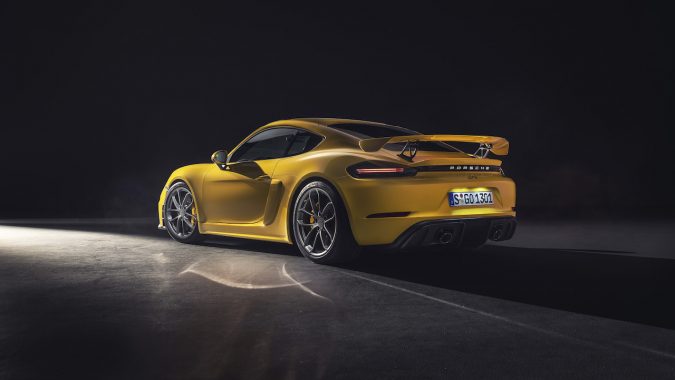 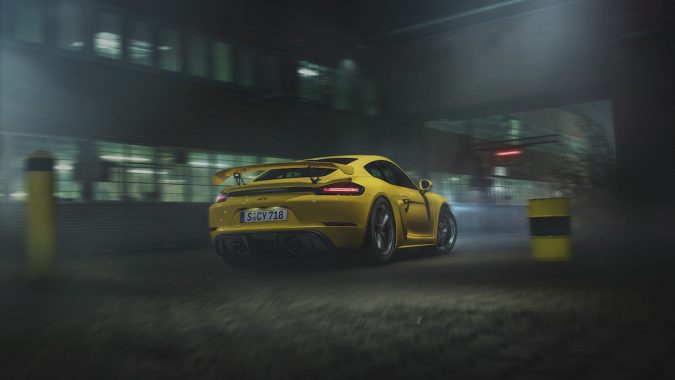 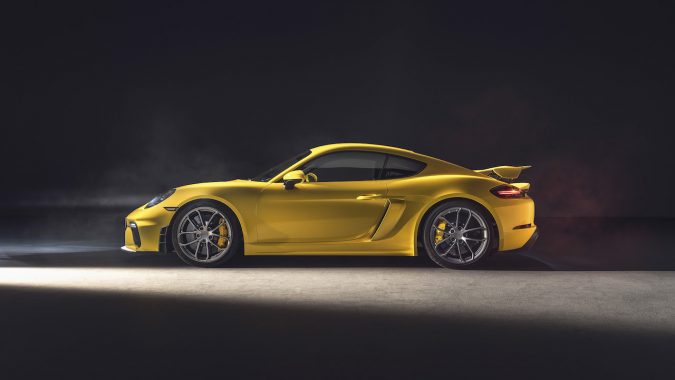 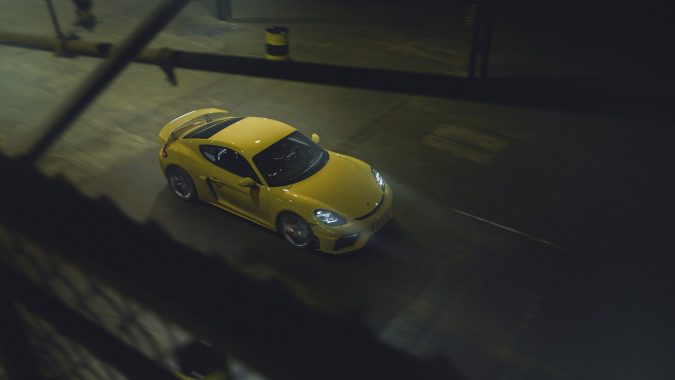