With performance all-wheel drive and up to 590 hp, we push the upcoming Taycan GTS sedan beyond 200+ km/h on the track.

LOS ANGELES, CA – Fresh off the 2022 Porsche Taycan GTS introduction at the LA Auto show in mid-November, Porsche brought the all-electric performance luxury sedan for sampling to Willow Springs Racetrack just outside of LA, while the new Taycan GTS Sport Turismo five-door super wagons were let loose on California’s ultra-twisty canyon roads on the way there and back.

Porsche has sworn us to secrecy as to what the Taycan GTS Sport Turismo is like to drive on the road for another couple weeks. Yet this was one of the first officially sanctioned track tests for media of Porsche’s four-door EV, and the very first of the new GTS line, which lands above the 4S and just under the Turbo models in Porsche’s Taycan price and power hierarchy, so there’s lots to discover here. Those letters still stand for Gran Turismo Sport, and in other GTS models, bring a louder and sportier start up and exhaust sound, as well as racier features and options.

For this Taycan GTS sedan on the track, it didn’t sound notably louder than a regular Taycan upon start up, but the raciest Sport Plus mode does certainly bring in more of what Porsche calls a GTS-specific “electric sport sound”, which is a futuristic note that could be likened to a digital accordion attached to your right foot. It’s still very refined compared to old-school engine revs, but it does add drama to when you plant the accelerator. 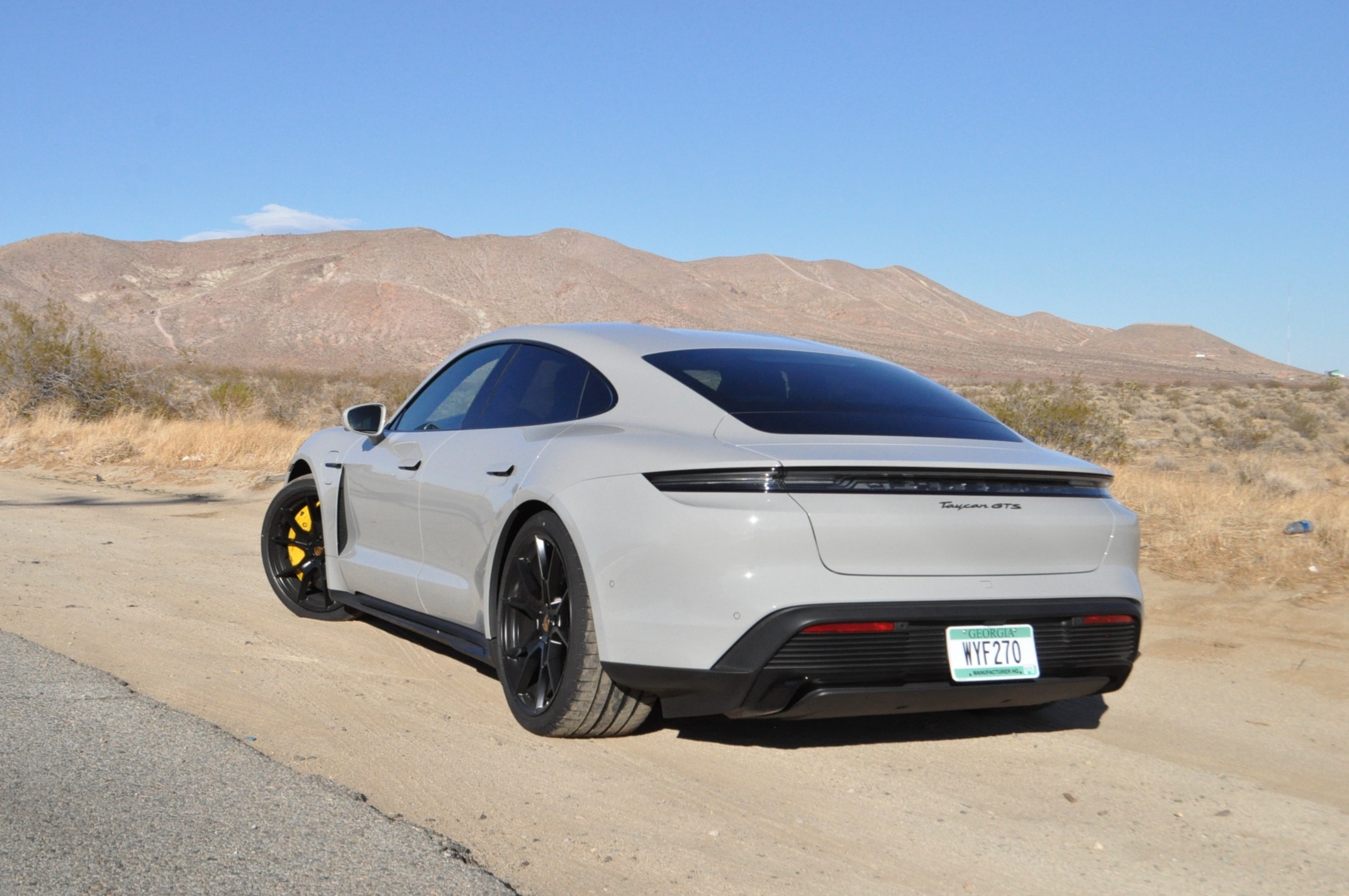 All Taycan GTS models are all-wheel drive, but with more of a rear-power bias than the Taycan Turbo and even the Turbo S. This surprised many when presented by the Taycan’s director of powertrain Klaus Rechberger, which also offers the adaptive air suspension (more low-speed) and active suspension management, but with a more performance-focused base setting than the Turbo models.

“It’s 20 per cent stiffer than a Turbo S, or any other (Taycan) derivative,” he said.

The Taycan GTS even uses the same motors as those range-toppers, but is software-limited to make less power. That power is still massive, its two electric motors putting out a combined 509 hp, and up to 590 hp when using Launch Control. This overboost power in Sport Plus mode can throw up to 627 lb-ft of torque your way in an instant from a stop, with a 0-100 km/h time of 3.7 seconds. That’s a half second slower than the Taycan Turbo (3.2) and Turbo S (2.8), according to Porsche figures, which tend to fall on the conservative side. 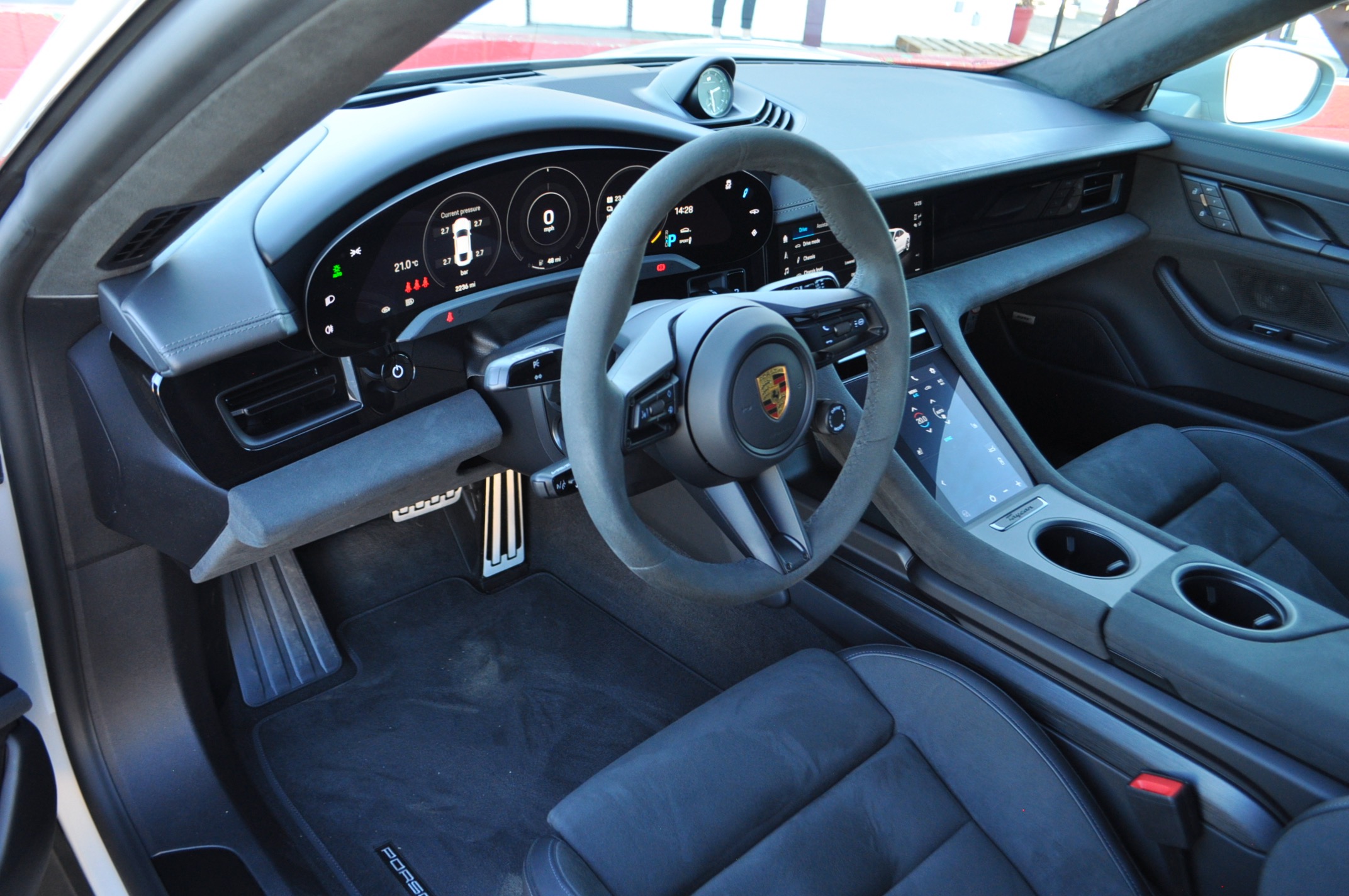 Climbing into the GTS Taycan’s driver’s seat, I surprisingly didn’t bump my helmet into the roof, as happens so often in low slung sports cars. The Taycan Turbo S ahead of me driven by a Porsche Experience (coming to Canada!) instructor would gradually increase the pace as we upped the performance settings and downgraded the guardian angel stability control settings, which can go into full off, and an unofficial drift mode.

Out on the track, the rotary wheel to the right of the steering wheel familiar to Porsche drivers is helpful once you quickly realize that Sport mode feels way too tame for the track, as a quick twist to Sport Plus will adjust steering feel, sound, and suspension sharpness to more enjoyably aggressive levels. Power comes on instantly after almost any corner, and the brakes on the GTS (optional carbon ceramics in this case) always felt strong and progressive, allowing a touch of trail-braking into corners.

That said, it would have been nice to have regeneration paddles that would mimic shift paddles upon braking, as offered in Porsche’s PDK-equipped gas vehicles. And the fact that there’s not even a flat-bottom on the steering wheel in the GTS while there are in some compact mainstream crossovers just seems wrong. 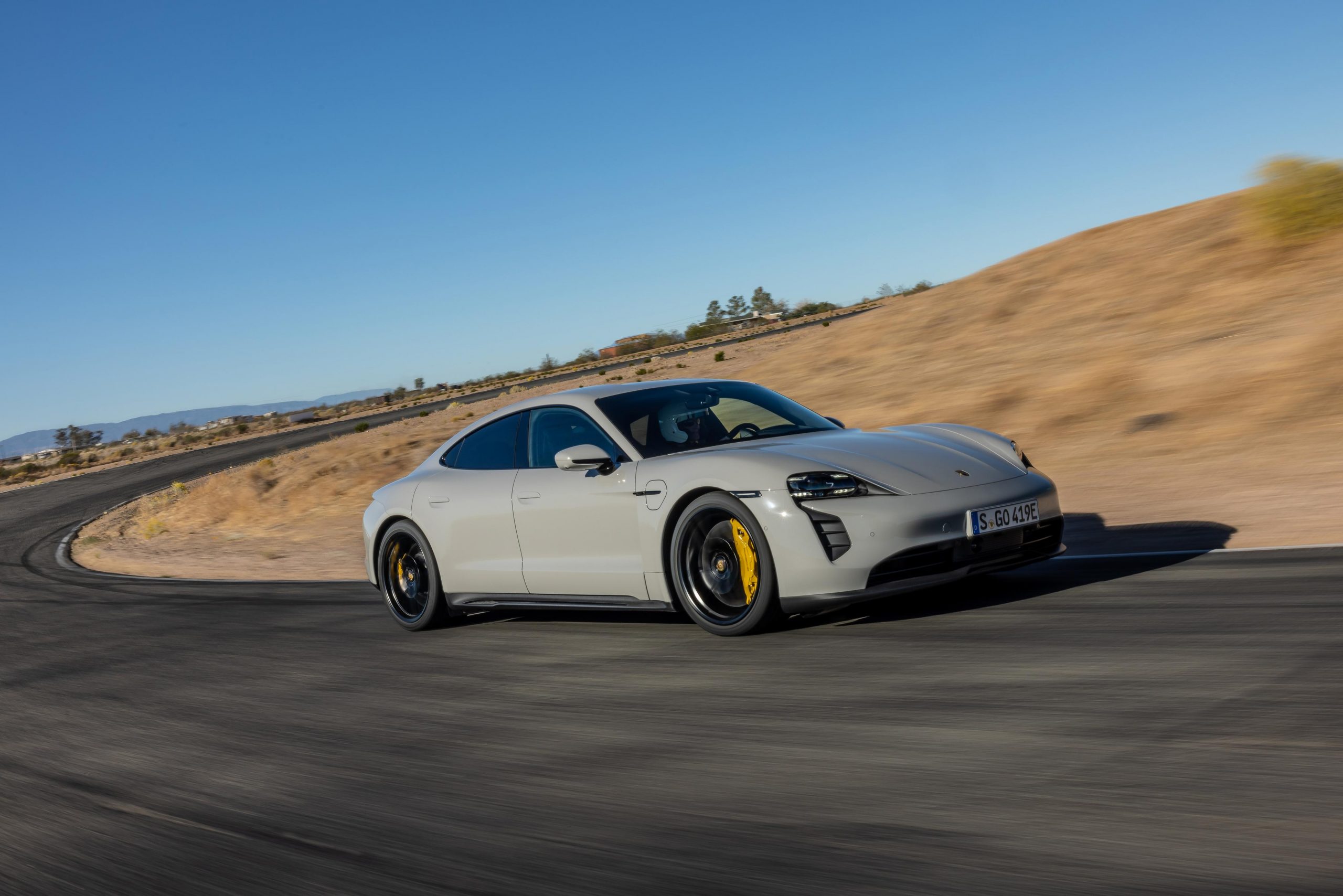 The GTS near the handling limit doesn’t quite feel like it’s trying to imitate a rear-drive sports car, with only very occasional sliding of the rear end if you roll back onto the accelerator too quickly. But it’s amazingly flat for any car, and not just a four-door performance machine that’s more efficient and eco-friendly than a Toyota Prius.

From an electric vehicle perspective, the Taycan GTS offers the same upgraded drivetrain of all 2022 Taycans, which increases the range for this model year by decoupling the front motor when not needed, thereby increasing efficiency. The GTS hasn’t been rated in North America yet, but the traditionally optimistic WLTP rating is 507 km, courtesy of its 93.4 kWh battery. And like the Turbo models, it can be quick charged at up to 270 kW with the right high-speed charger, the fastest charging EV in Canada– until the Lucid Air hits the market, that is.

The onboard telemetry of an impressive Porsche app attached to an iPhone stuck on the rear-view mirror told us that this GTS briefly reached 205 km/h down the front straight, compared to the roughly 130 mph (208 km/h) top speed the instructor said his team had reached on this track in the Taycan GTS. He may have been graciously conservative with that estimate, but the GTS likely didn’t have the stretch-out room here to reach its top speed of 250 km/h, which is only 10 km/h less than the officially listed figure for the Taycan Turbo S he was driving.

Which leads me to wonder which Taycan is more entertaining to drive on a track. Earlier in Germany, I had driven a Porsche Taycan Turbo S up to an indicated 265 km/h on the Autobahn, where the most drama was the chance of being cut off in the left lane by some 220 km/h-travelling dawdler. It was exhilarating but in different ways.

On the track, the GTS feels surprisingly like a true 911 sports car with four doors, not blowing you away with the power of a Taycan Turbo S or the volume and single-minded racy drama of a 911 GT3. Its low centre of gravity lead to an ability to dance on the edge of high-speed control while cornering, braking, and accelerating at mid-engine exotic car levels, where its size and spaciousness wrap tighter around you as you realize that this Taycan GTS is a dynamic superstar – no matter how many doors it offers. The GTS will arrive in the spring of 2022. 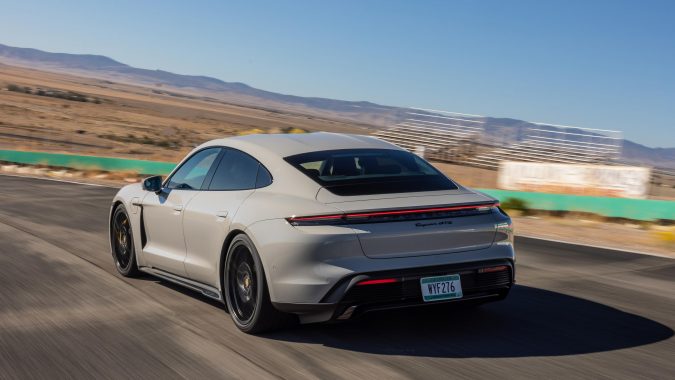 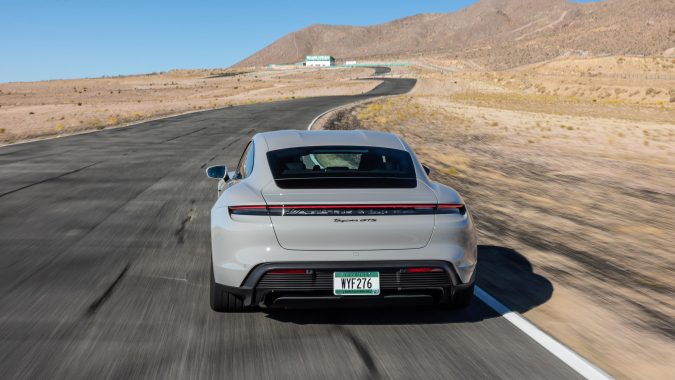 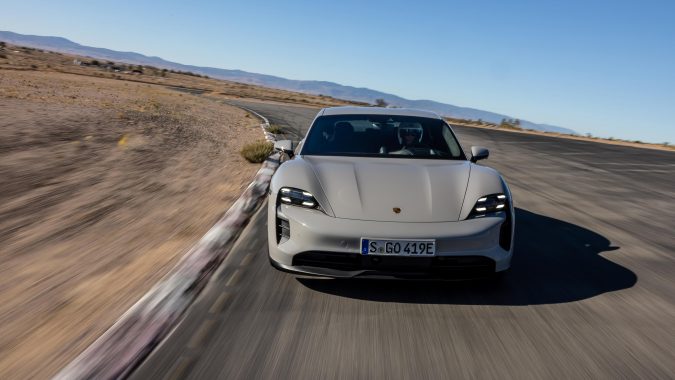 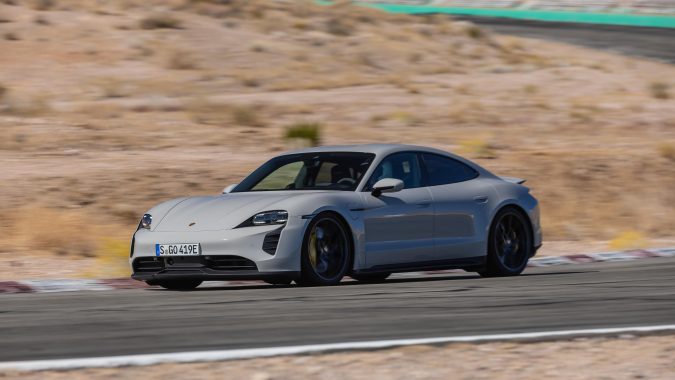 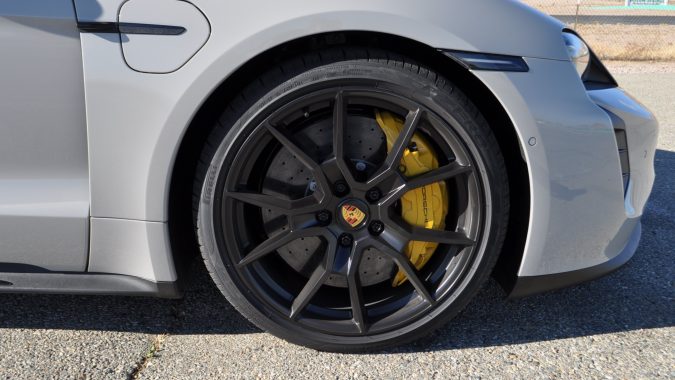 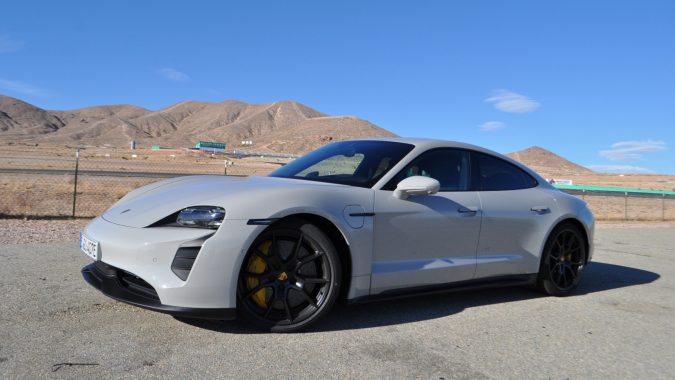 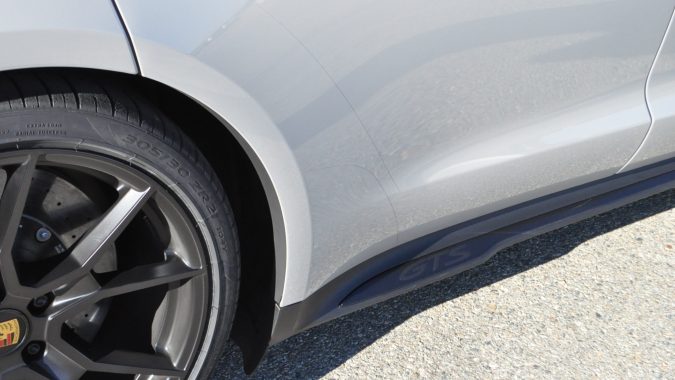 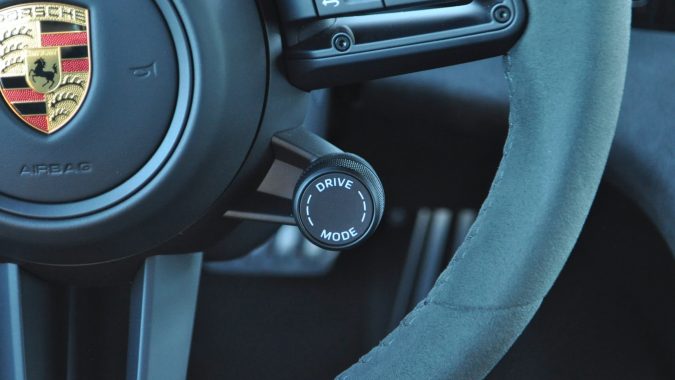 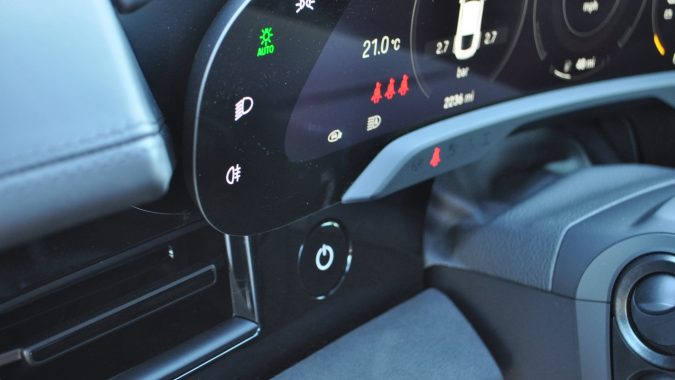 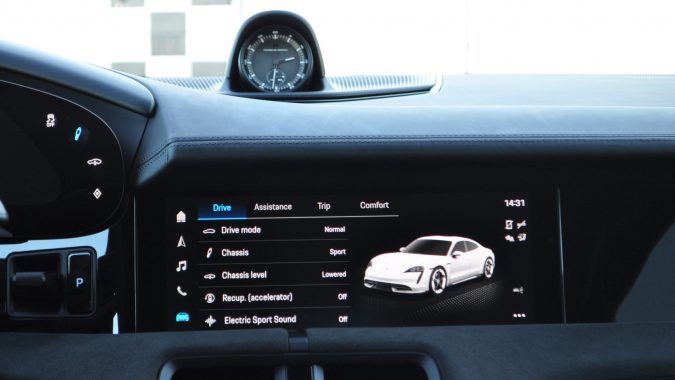 PRICE: (Base) $150,100 not including destination fee, taxes and options