BOWMANVILLE, ON – An inherently flawed rear-engine design made great by clever engineering and 56 years of incremental tweaks, nips, and tucks. The Porsche 911 has inched closer to perfection with every successive generation. It’s also grown considerably but has always retained the fundamental elements that make it one of the few real driver’s cars on the market.

There’s an all-new one for 2020 (known as 992 internally) and it’s the most technologically advanced 911 we’ve seen yet. Sticking with tradition the 911s slow but careful evolution ensures that it looks pretty much like the one that came before, even though it shares no body panels with the outgoing one.

Even side-by-side I found myself having to look twice. But here are a few easy ways to tell. The front trunk lid or frunk lid’s lower edge is straight, instead of curved, and a bit more serious with a couple of character-defining strakes down the middle just like the original.

The front bumper is now just a mounting point for a phalanx of intakes and ducts and new LED headlamps receive distinctive 4-point DRLs. The rear sees a more dramatic change by 911 standards with taillights bridged by a thin light bar; the third brake light has moved onto the rear decklid grille but can get obscured when the multi-stage rear spoiler is extended. But Porsche has thought of that. Mounted under the rear spoiler, a fourth brake light reveals itself when the wing pops up. 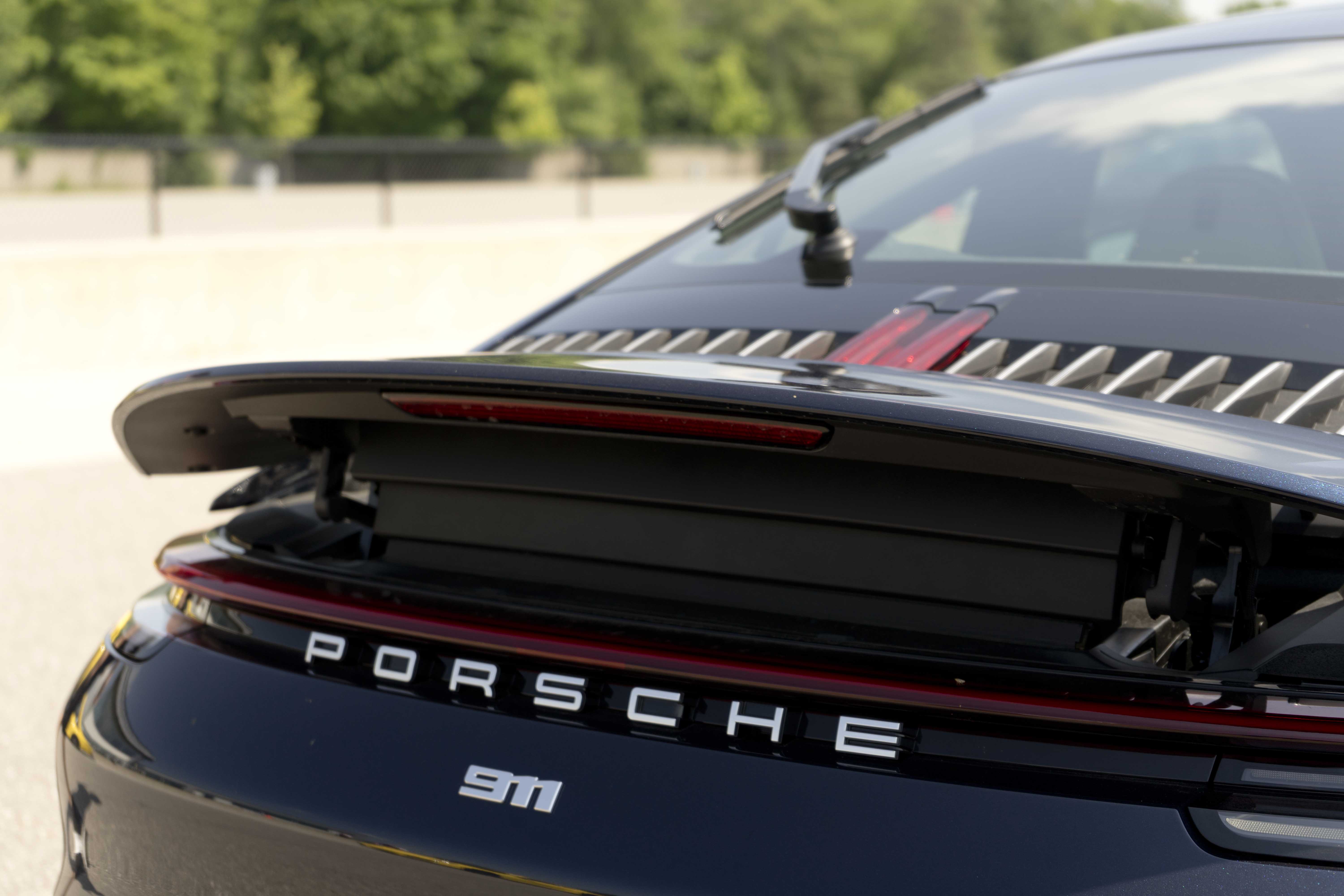 The 992 is slightly longer than the old one but sits on a wheelbase that remains the same. Staggered diameter wheels are 20-in the front and 21 in the back. The rears are a meaty 305 mm wide, nicely filling out the standard widebody on the rear-wheel-drive Carrera S and all-wheel-drive 4S.

Both were at our disposal to wring out around the Driver Development Track at Canadian Tire Motorsport Park.

It was one of those summer days that tend to beat you down. The air was thick and hot and inescapable. Challenging conditions for a road car to be sure.

Inside the air-conditioned leather-lined cabin is cool and comfortable. Supportive sport seats signal sporting intent. The new dash design is retro-modern. A play on the original, with a quintet of gauges, that are all digital except the swiss-watch faced analog rev counter right in the middle as always.

More sound insulation means that there’s less of that flat-6 thrum making its way into the cabin of the idling 911 Carrera S I’m sitting in on pit lane. The seating position and outward visibility are just about perfect. A quick tug of the comically small electronic gearshift puts it into drive and we set off.

My instructor, riding shotgun, looks over his shoulder making sure the way is clear and gives me the signal to punch it. We shoot out of the pits with enough force that I quickly back off the throttle. But only temporarily.

The reworked 3-litre flat-6 behind the rear axle has been given new turbos, bigger intercoolers, electric wastegates, and uses piezoelectric fuel injectors to make 443 hp and 390 lb-ft of torque that is fully available at just 2300 rpm, a bit higher up the rev range than the outgoing one but there’s more of it now. In fact, this is basically the same power as the last-gen GTS and the factory acceleration of 0-100 km/h in 3.4 seconds (on a 4S with sport chrono)  is actually quicker despite the 992 being heavier. 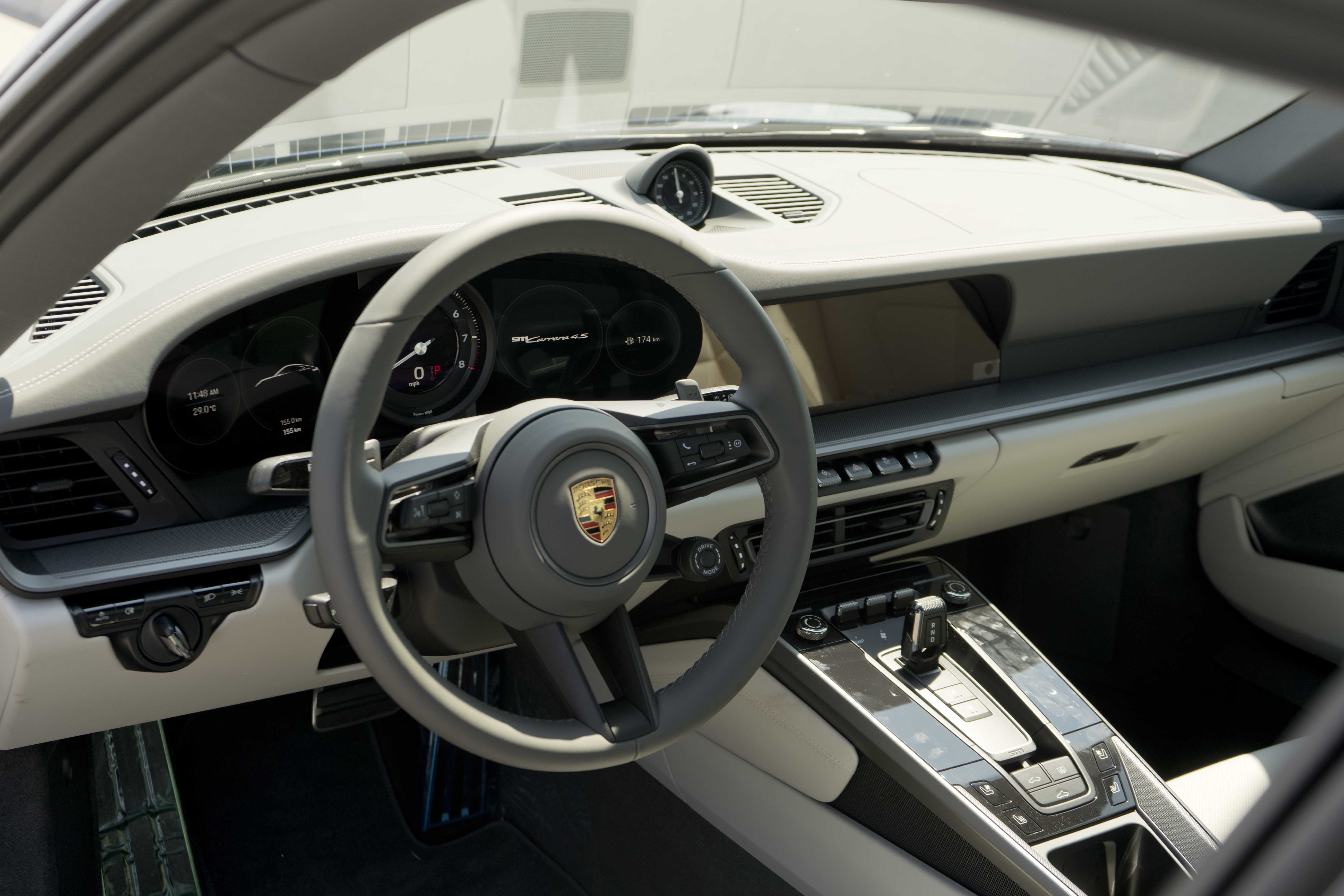 It only takes a few corners to get used to the 992. A characteristic that’s shared with every Porsche I’ve driven. They’re just so intuitive, and easy to drive fast.

The DDT track at CTMP is a tight and technical series of curves where you don’t hit the but-clenching speeds of the main track. But this shorter course is a great place to showcase the agility of the 992. And it was a perfect test for the boat anchor brakes that have a stronger, composite pedal with less travel for a more direct feel. Stand on them hard and the 992 scrubs of speed with alacrity, as the phenomenal new 8-speed dual clutch telepathically drops a couple gears in the blink of an eye. Turn-in is immediate and you can rocket out of corners early without fear of being bitten or swapping ends.

There’s so much grip on hand that the tires barely make a peep. We keep the 911 in Sport Plus mode, and the driving nannies are kept at bay, only cutting in when your author makes an obvious error.

Through the chicanes and hairpins, after just a handful of laps, I’m starting to build a rhythm like I’ve been driving the car for years but the instructor signals towards the exit and my time in Carrera S is up.

But the day is not over and we both jump into the last generation 911 Carrera T. The T stands for Touring and this is the 911 for drivers. Less weight, less soundproofing, fixed-back carbon seats, pull straps for door handles. Porsche reps are quick to point out that this Neunelfer is roughly 200 lbs lighter than the 992 we just flogged around the DDT. And this is noticeable almost immediately after setting off. 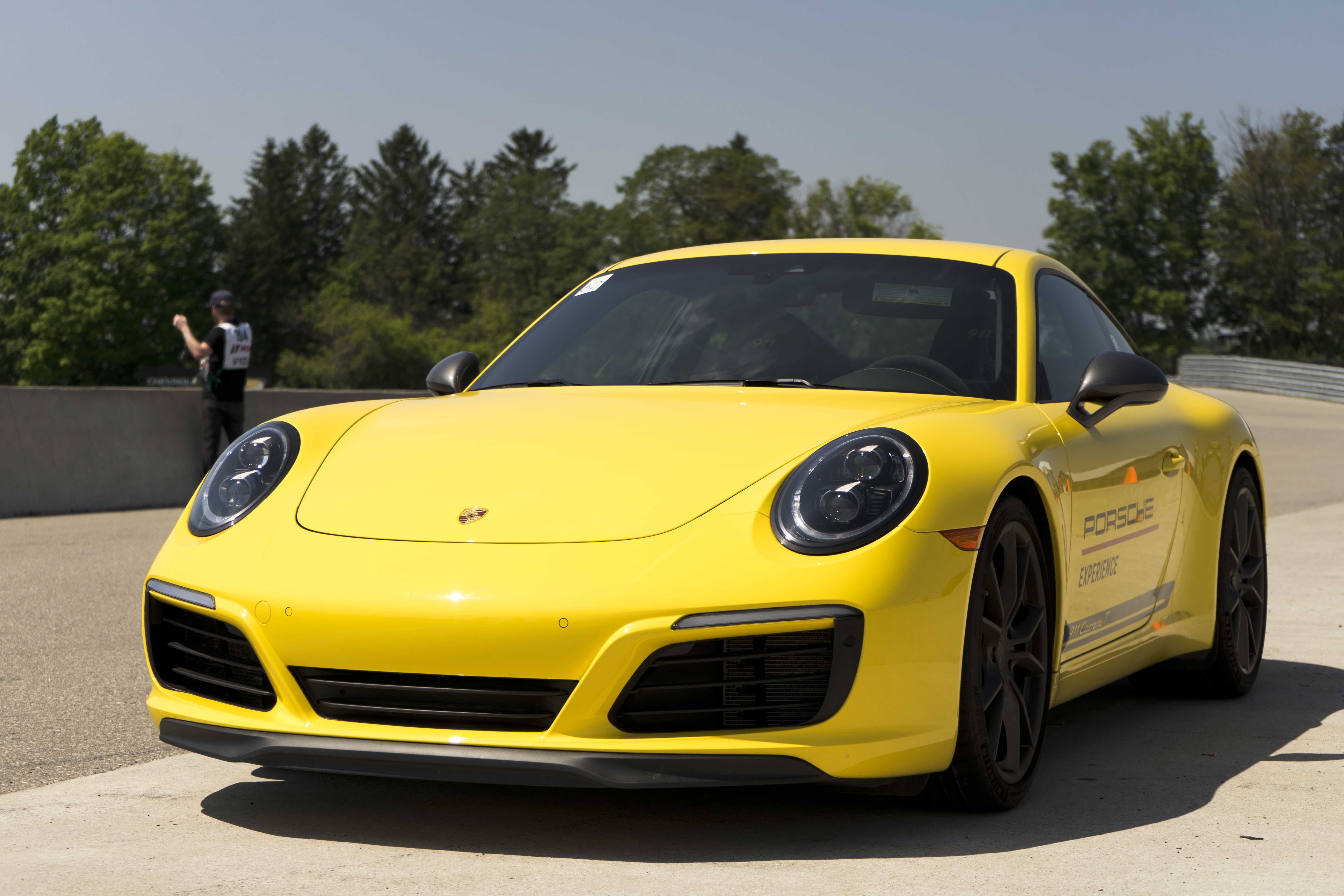 It feels raw; more noise enters into the cabin, the engine’s more vocal, the steering sharper and more talkative. It’s down on power (370 hp) compared to the 992 but feels just as quick around the DDT in my hands.

After a few laps in the 911 T, we get back into a 992 but this time it’s the all-wheel-drive 4S. The extra weight and driven front wheels are nearly invisible, but the 4S is noticeably easier to drive quickly. Steering feel is not as crisp but it turns in just as fast and you can exit corners with reckless abandon. We are in Sport Plus mode again but this time you can feel the front wheels coming to the rescue when things get too hot. On a wet track, the 992 4S would be unstoppable.

I could lap these cars all day and all night. They’re comfortable, approachable and have limits that are well beyond my abilities. But they still make you feel like Mark Weber when you’re behind the wheel. Decades of racing have honed the 911 into a bonafide track machine and the 992 does an even better job of impersonating a luxurious grand tourer without losing the stuff that makes it a 911. Porsche enthusiasts should be rejoicing.

I thought the old one was about as close to perfect as a sports car could get. Turns out that the boffins in Stuttgart found ways to make the new one even better. 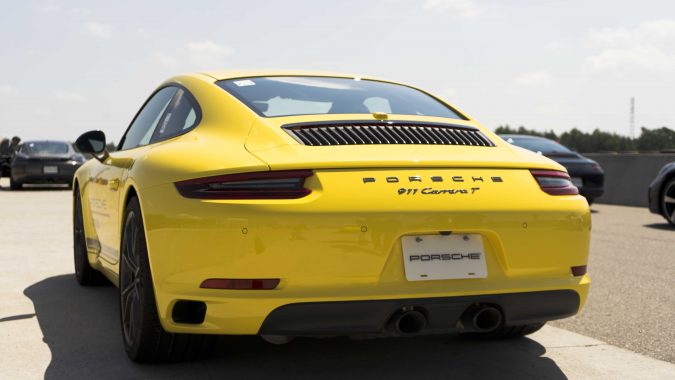 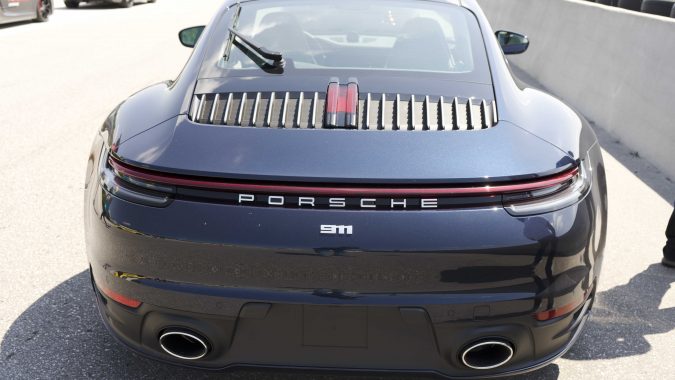 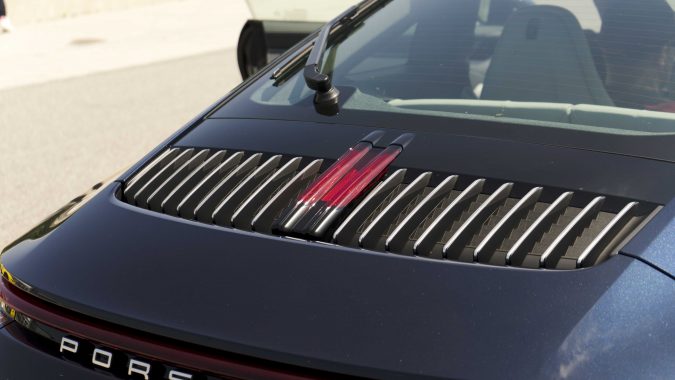 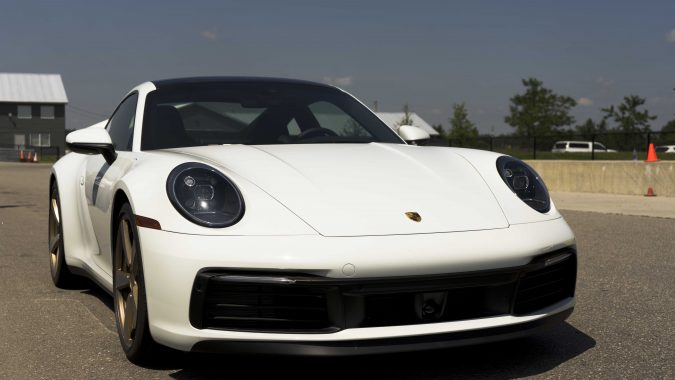 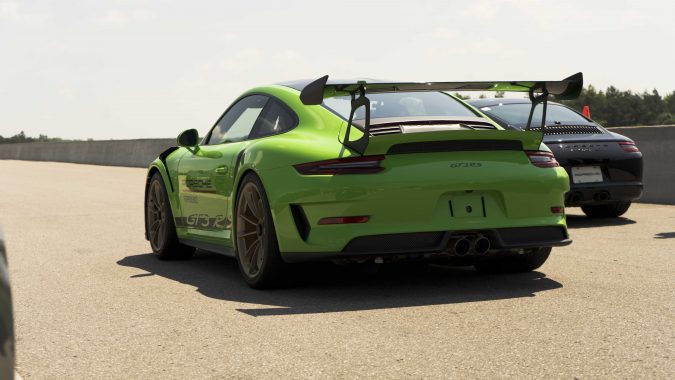 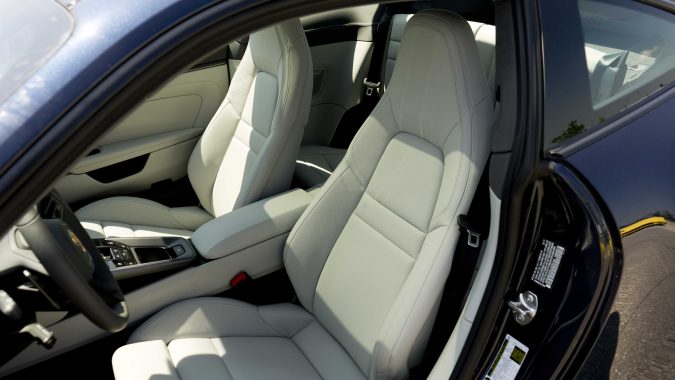 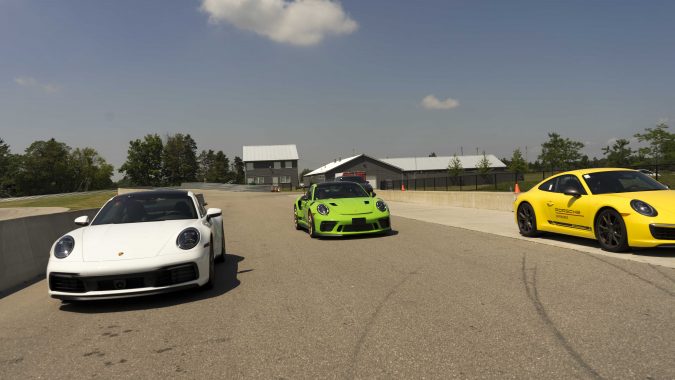 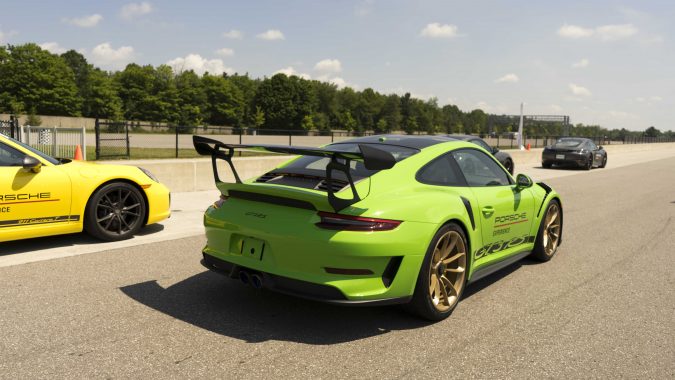 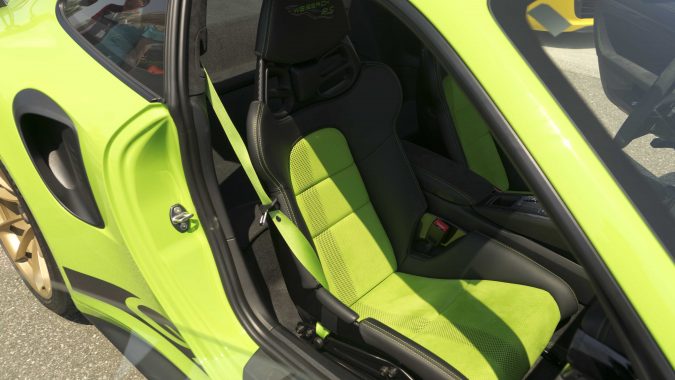