MARICOPA ARIZONA—As I always say at the beginning of a Volkswagen test, I have owned a boatload of Volkswagens.

OK, so a small boatload.

To recap, there have been at least a half-dozen Golfs, Jettas (Jettae?) and Passats loitering around the ol’ adobe hacienda over the years, most of which have been excellent, most of the time.

In the car journo game, I’m not alone in being a VeeDub owner. At a dinner a while back with a group of other auto scribes, it turned out that VWs are disproportionately represented among the cars we actually buy with our own money.

None of this makes me prejudiced in favour of VWs. Again, as I have said before, I prefer a word I made up: “post-judiced.”

So the chance to try the 2020 Passat well before (dare I say, “pre”…) its launch in the middle of next year was not to be missed.

Lots of space (nearly 650 hectares), lots of hot weather and sun to test durability (they had to build massive freezers to test for northern Canada conditions) and lots of wide-open space to catch those sneaky spy photographers.

VW still felt obliged to decal the cars in black-and-white patterned camouflage, so as not to let us know what they looked like.

As if you/we couldn’t guess.

They also wouldn’t let us take our own photographs, so if you don’t like what you see here, or if you stumble across the same pics in other reviews of this car (as if…), don’t blame me.

Testing a car at a proving grounds offers both advantages and disadvantages.

On the plus side, we don’t often get to test cars on an eight-kilometre high-banked oval at speeds that would get you tossed into jail (do not pass GO, do not collect $200) back home. E.g., near as dammit is to swearing, close to 200 km/h.

Also, there are bumps, heaves and corduroy roads that are even worse than the frost-heaved byways back home, a good test of any suspension.

On the downside, each of us has a series of roads on which we test cars, thereby gaining a modicum of back-to-back comparison possibilities.

But we’ll take what we can get.

Under the skin, the 2020 Passat is essentially the same as it has been. Same 2.0-litre four-cylinder turbo engine producing the same 174 horsepower, although peak torque is up from 184 to 207 lb.-ft. (no Diesel, sad to say); same six-speed automatic transmission; similar suspension set-up. Front-wheel drive only.

The new body shaves a few kilos off the car, so performance should be marginally better than before.

The new sheet metal (as far as we could tell!) appears to be slicker, more aerodynamic.

The interior was also partially covered by matte black cloth except, of course, for the instruments. As it happened, that cloth fell off the dash on pretty much the first corner; we didn’t expend a lot of effort trying to re-attach it.

So we can reveal that the dash looks rather like the latest Jetta sedan and Atlas SUV, which means bright, clear instrumentation and mostly logical controls.

“Mostly”? Yes, again, sad to say. If there is a way to shut off the damnable automatic door locks, I still couldn’t find it. Your VW mechanic can disable this if you ask nicely. And shove $50 in his pocket.

At least, that’s what it cost me for my Jetta. 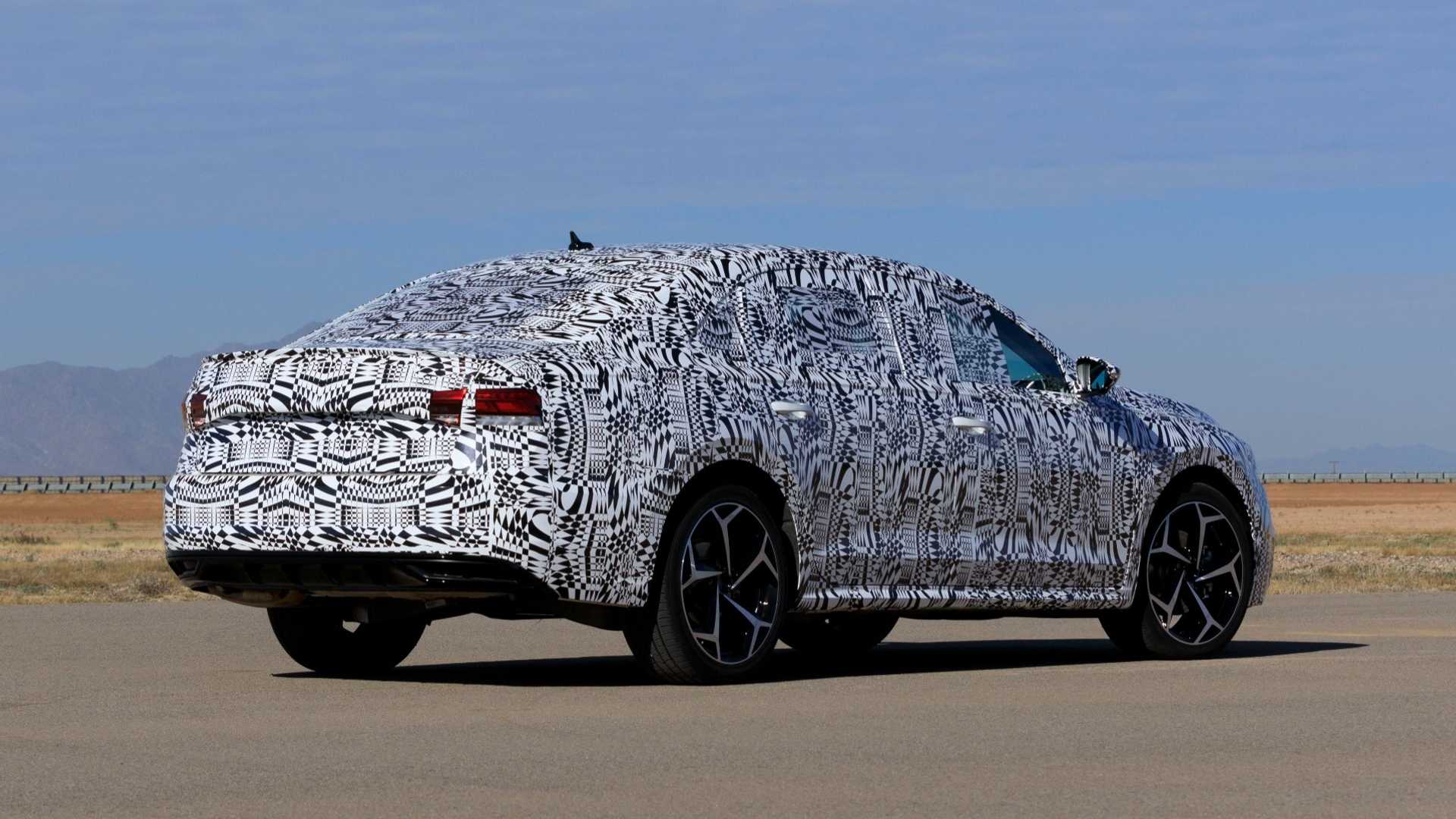 Several competitors, notably Hyundai and Kia, are loading up their cars with ever-increasing amounts of gear, and VW must follow suit.

Hence, equipment levels in Passat are generous, with many items that were formerly only available in the upper trim levels working their way down the price scale.

So things like an eight-inch touch screen, LED headlamps and satellite radio are now standard on the base trim level. Ironically perhaps, this trim level is named “Highline”; I guess it wouldn’t be smart marketing to call it “Lowline.”

Goodies like adaptive cruise control, rain-sensing wipers, the always pointless blind spot warning system and the always awful lane-keeping assist are available as you move up the ladder. Fortunately, that latter item is easier to turn off than the automatic door locks.

Two areas where Passat has the competition well and truly beaten are rear seat room (NBA stars would almost fit in there) and trunk space (which has to be best-in-class).

On the track, the Passat drove smartly. Even if it is built in the US of A, Passat’s Teutonic roots still shine through. Steering is precise, the ride is firm but nicely composed, handling is everything you could expect from a mid-size sedan, and possibly more, braking is firm and strong.

It’s difficult to judge ride quality over the ultra-bad test roads because I had nothing to compare it with, but it felt solidly built.

Given VW’s expertise in vehicle dynamics, and my own experience, I would expect Passat to be at or very near the top of its class in this area.

Pricing won’t be announced until closer to launch date, but I expect it won’t be far off today’s car which starts at $32,995.

You might well wonder why VW is putting so much effort into sedans when Ford is canning them almost entirely, and GM is also backing away.

These two seem to claim that everybody now wants an SUV. Which VW, with Tiguan and Atlas, will also be happy to sell you.

But then you look at the numbers and realize those domestic companies’ sales are still somewhere around 20-25 per cent sedans.

The biggest import players such as Honda and Toyota are even higher than that. How can you walk away from that big a slice of the market?

VW is hoping you will walk right into their showroom and drive out in a new Passat.