The 2016 Acura MDX people mover gets new features and tech

The 2016 Acura MDX seven-passenger premium SUV benefits from a new nine-speed transmission, along with a full suite of driver aids that come standard.

Despite our tendency to have fewer kids (or no kids), there’s still a market for large people movers.

The most cost-effective of which is the minivan – nearly uncontested in terms of room and family friendliness for the dollar.

But these domestic haulers have been steadily losing favour, with the pricier, thirstier and less capacious three-row SUVs taking up the slack.

Am I making a point here?

You betcha – and it’s not that Canadian carbuyers are illogical or like to spend more dough.

And I’m no exception, which is why I asked Honda’s PR department for the seven-passenger Acura MDX rather than the more practical Honda Odyssey during the hectic Christmas holidays. 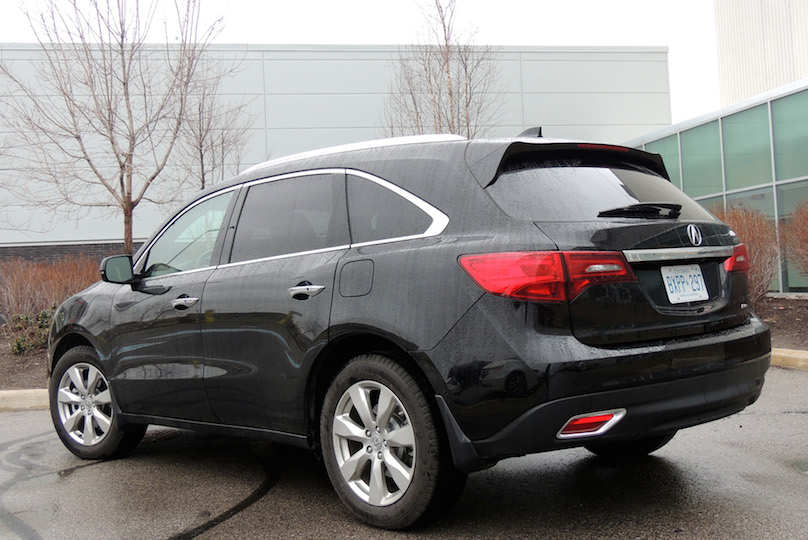 The MDX I last tested was a 2014, which had been redesigned from the ground up. This third-generation model was lighter than its predecessor, constructed of 64 per cent high-strength steel, aluminum and magnesium, which along with better aerodynamics and a more efficient engine, delivered 21 per cent better fuel economy.

This transmission gets a push-button gear selector (like Honda Pilot, which shares the same platform), along with paddle shifters and grade logic control.

When using the paddles, Acura claims its new autobox will shift five times faster than the previous six-cog unit. I don’t recall the old one being particularly slow, but the 2016 does shift plenty quick – especially in Sport mode.

On that note, the vehicle’s Integrated Dynamic System (Comfort, Normal and Sport modes), will amp up performance in the latter setting, with a quicker throttle response, firmer steering and more aggressive transmission mapping, not to mention a little more engine and exhaust sound to reward your efforts.

Its track-tuned independent front and multilink rear suspension is complemented by standard Agile Handling Assist (brake vectoring to slow the inside tire) and amplitude reactive dampers.

As a result, you can carve corners without too much body roll, yet the ride is forgiving over rough pavement.

A key reason buyers choose SUVs and crossovers is the availability of AWD. Acura’s “Super Handling” version (SH-AWD) monitors driving conditions and can send up to 70 per cent of torque to the rear wheels – and it can route up to 100 per cent to the rear wheel with the most grip.

Indeed, its mechanicals are sound, but those shopping this segment also demand a premium interior. On that note, the MDX should not disappoint.

Standard items like ambient lighting in the door handles and footwells glam up the passenger cabin, as do leather trim, aluminum accents and abundant soft touch. I wouldn’t call the MDX posh, but it doesn’t fall short on content. 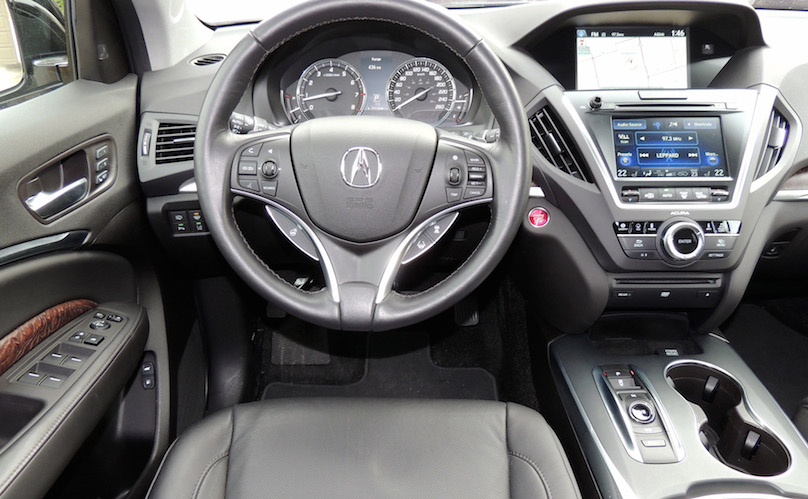 And there’s no shortage of additional content for those with deeper pockets.

The Navigation package ($55,990) adds the obvious, along with 19-inch alloys, blind-spot information and cross-traffic alert. It also includes upgraded audio, which gets progressively better as you move up the ladder, topping out with the 12-speaker, 546-watt ELS Surround system found in my Elite tester. 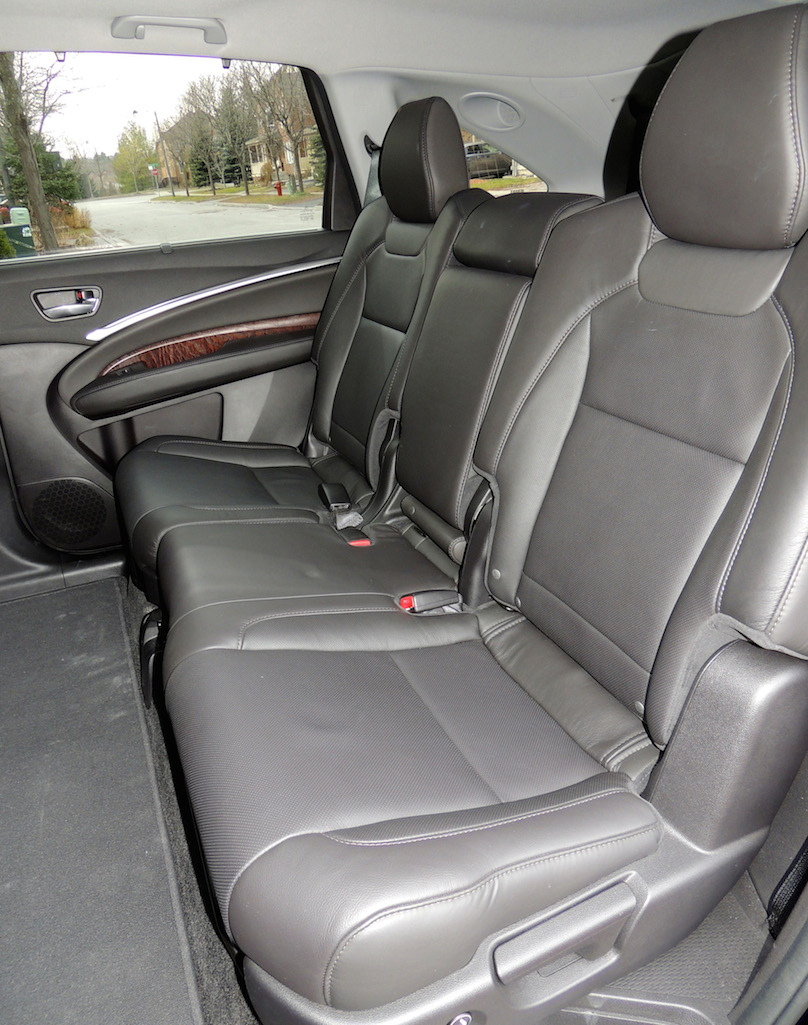 Spaciousness is a given in vehicles this size, and both first and second rows have no shortage of head and legroom. Middle-row passengers also get their own console with HVAC and audio controls.

Third-row passengers, however, had better be small in stature, but getting back there doesn’t require too many gymnastics – thanks to the one-touch “smart slide” feature.

Behind is 447 litres of cargo space and a large underfloor bin. Drop the 50/50 backbench, and this enlarges to 1,277 litres with a flat, carpeted cargo deck. Capacity maxes out at a cavernous 2,575 litres with the second row folded. 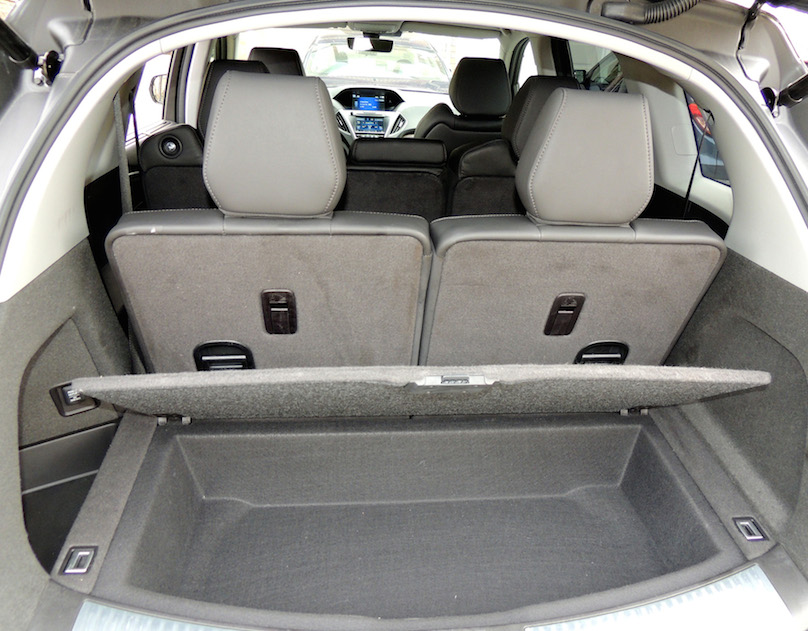 As a hockey bag hauler, the 2016 Acura MDX may fall a little short of the standard minivan, but it’ll do.

And it is a worthy contender among rivals like Audi Q7, Mercedes-Benz GL, Infiniti QX60 and Lexus RX 350, offering a blend of luxury, driving dynamics and utility that deserves a closer look.