“Oh cool, is that the new Nissan Altima?” Of all the test vehicles that have graced my driveway, that wasn’t one I had expected to elicit that reaction. But there he was, the door to door phone company rep, asking about the new Altima. So of course, I was curious. This was a younger guy, around 30, and he was driving a full-size pickup. So why the Altima attention?

Turns out that his other car, the family car, is a compact sedan with well over 300,000 km on the odometer. So it’s time for a new one. And he and his wife want something with all-wheel drive to help cope with winter. But what they don’t want is a great big crossover. Instead, they want something that’s fun to drive.

Which means that Nissan might be on to something here. Going one step beyond Mazda, which has made all-wheel drive available on the latest Mazda3, and making all four wheels driven standard across the board. Yup, even on the base trim. They might be starting a trend. Or they might just be making Subaru’s marketing team start pulling their hair out in frustration since after all that’s been Subaru’s go-to move since 1996. Offer buyers some of that crossover capability and maybe they’ll want to stay in a sedan. Especially a midsize sedan, since they can offer up large interiors without the footprint, C-Pillar blindspots, and fuel bills of a midsize crossover.

The Nissan Altima is all-new for 2019 and the sixth-generation is a big step forward for the car. Not just in the chassis, but in powertrains, tech, and the interior.

It starts with that all-new chassis. Independent suspension front and rear, and it’s an impressively solid car. Even with the narrow-sidewall 18-inch tires on my Platinum tester, this car shows no twist or flex over all but the harshest bumps. And that chassis helps the suspension do its job. Damping bumps and keeping the body controlled. There’s little roll here, and none of the wallowing that even the best SUVs this size suffer from when there’s more than the slightest dip in the asphalt 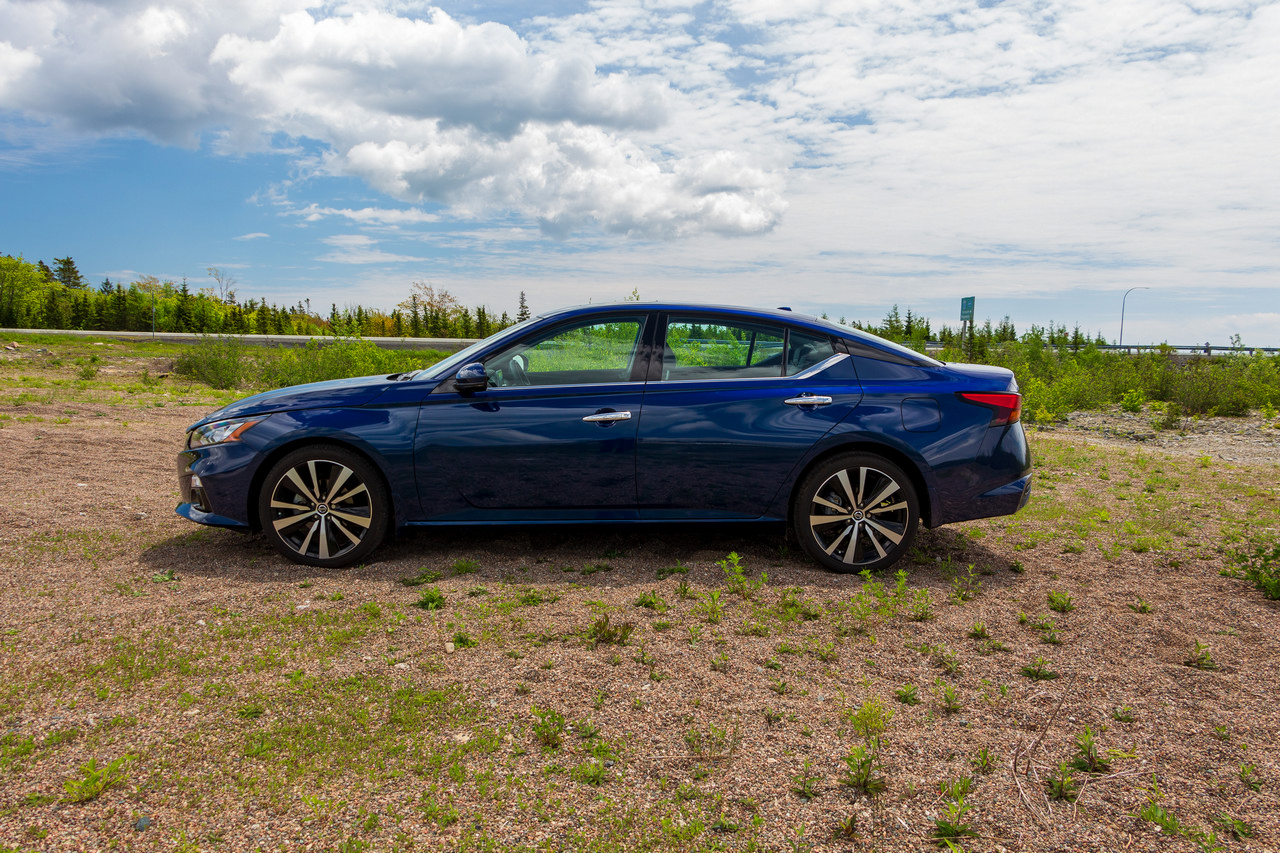 That smooth ride is helped by a new feature Nissan calls Intelligent Ride Control. It uses adjustments to the throttle and brake to stop the body pitching fore and aft on bumps. And since I wasn’t aware of it until I started writing, I’d say it’s transparent. It just felt like the Altima recovered from bumps shockingly quickly. The car will also apply the brakes to bring the nose in line if it thinks you’re not following your desired path in a corner.

The steering feels overboosted, especially at low speeds, and the ride isn’t immune to the cringe-inducing smack of an impact with today’s crater-ridden roads, but it’s more noise than any physical intrusion into the cabin. This isn’t a sports sedan by any means, but it’s a good, solid sedan ride. One that crossovers just don’t seem to be able to match.

Powering the Altima is a new 2.5L four. It’s a direct-injected design, putting out 182 hp and 178 lb-ft of torque. Nissan’s turbocharged and high-tech variable compression ratio engine is supposed to come later (in front-drive only) but for now this is the only one on offer. It delivers the power with an authority that suggests more shove and less car than this package really offers. But get the revs up and things start to get a little more noisy. Especially compared with the Accord or Camry.

The only gearbox here is a CVT, and as much as it pains me to say it, Nissan’s finally gotten the continuously variable transmission mostly tamed. No droning, no elastic banding, no getting caught doing the wrong thing at a yield. It just moves the car along, with some simulation of shifts. 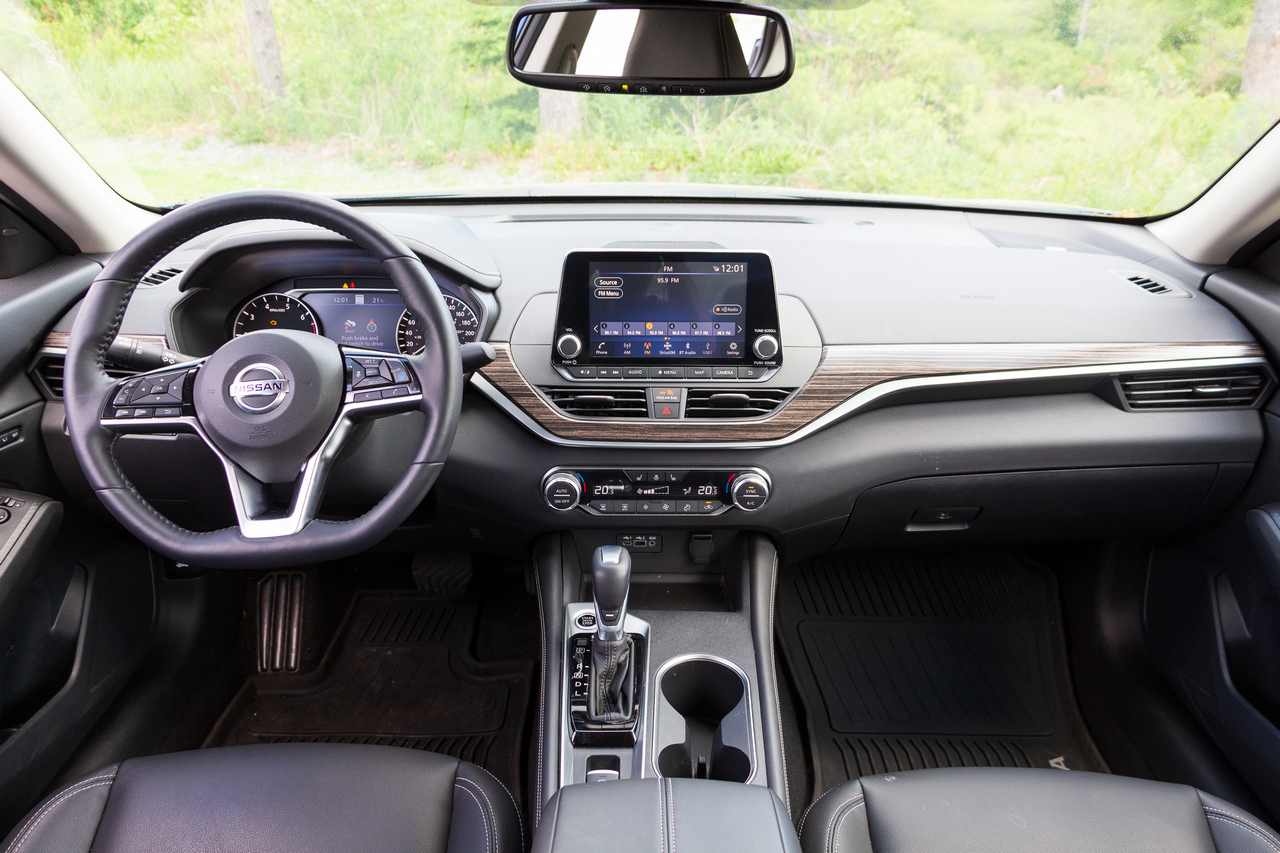 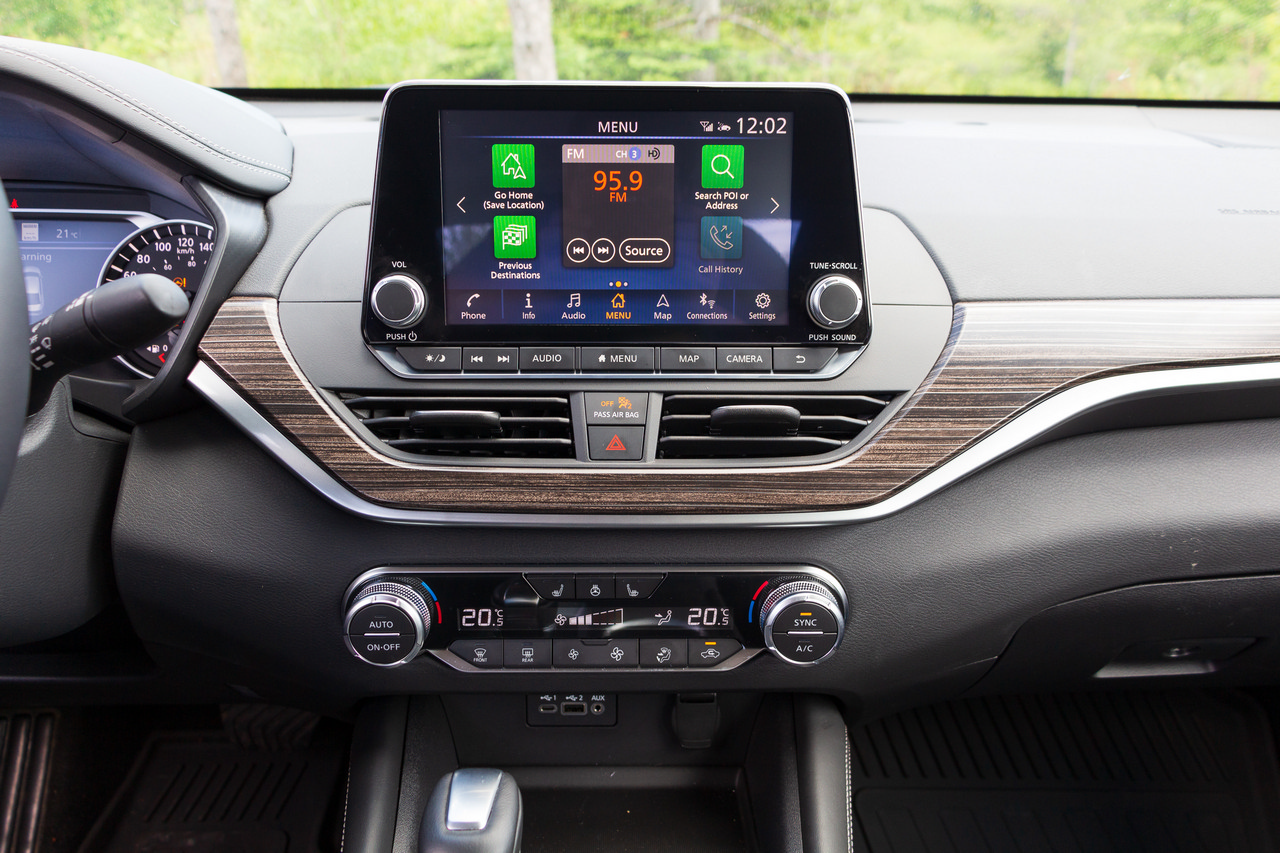 Ignore the engine noise, and this is an impressive package. I averaged 6.8L/100 km in mixed driving. That beats my average in not just the Mazda3 AWD, but also the new Corolla Hatchback. Much smaller cars. And if you can find a crossover of any size that can come anywhere near that figure it’s a hybrid or you’re in Europe and it’s some sort of tiny diesel.

On the inside, this is classic sedan. It starts with a puffy leather seat that feels delightfully like an overstuffed armchair. Though if you’re as long of leg as I am, then the bottom cushion might be a bit too short for you.

The 8.0-inch screen stands proudly on the dash, and it comes standard across the board with Apple CarPlay and Android Auto. The screen’s a bit low resolution, though, and the images it displays look a bit dull. That’s especially apparent when you’re looking at the surround-view and back-up camera screens, where it’s tough to make out any detail. Those camera views lag as well, making them tougher to use when reversing.

I liked the simple layout of the instruments and steering wheel controls, and having real buttons and knobs for the climate control is always a plus. Though one of those climate control buttons didn’t seem all that effective. If you love AC, then you’ll love the Altima. The system in my tester wouldn’t turn off, no matter the settings I chose. Having to set your temperature to 25C in order to not freeze in June is an odd experience. And that much dry air isn’t exactly enjoyable. I reached out to Nissan to see if this was how it was supposed to work or if it was an issue with my car, but I didn’t hear back. The constant running of the compressor makes the fuel economy even more impressive, but if you’re worried about dry skin then make sure you check this on your test drive. 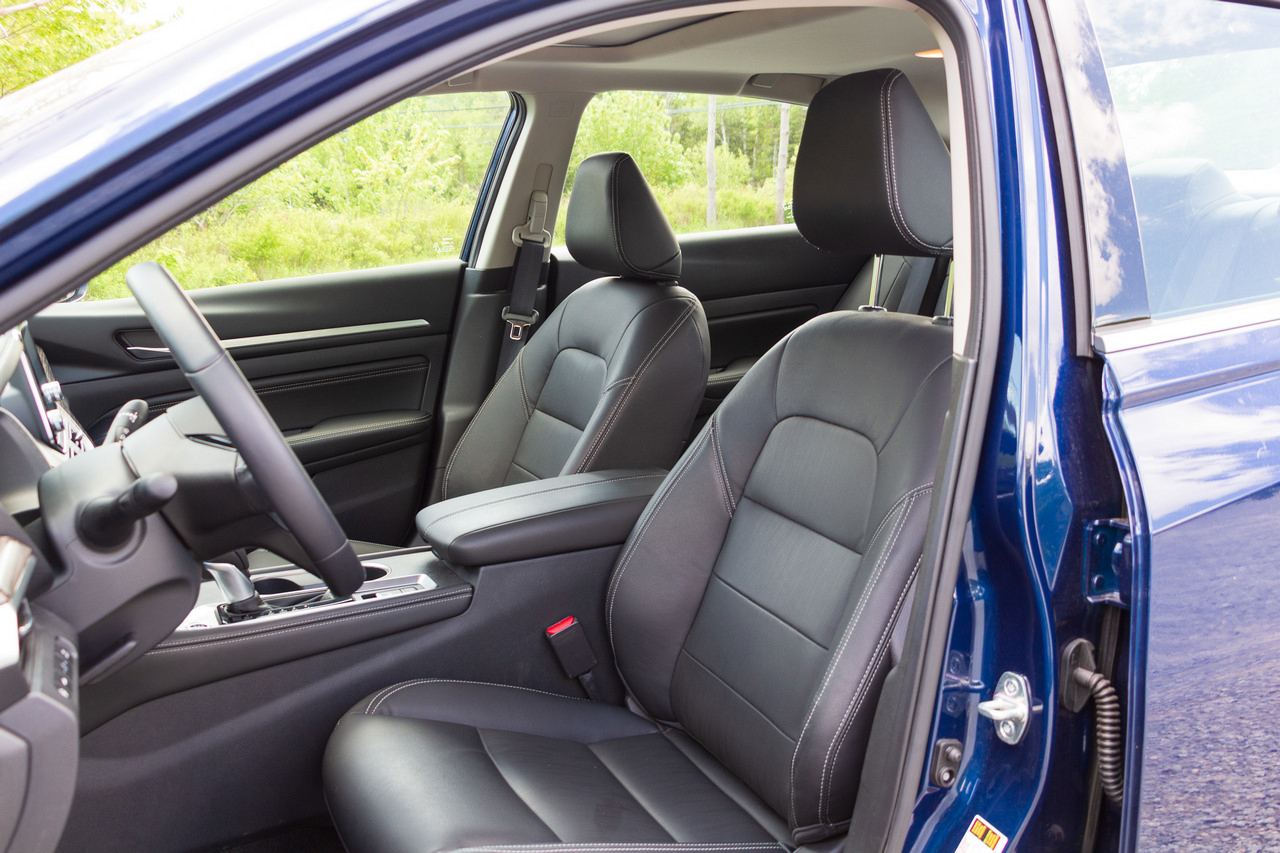 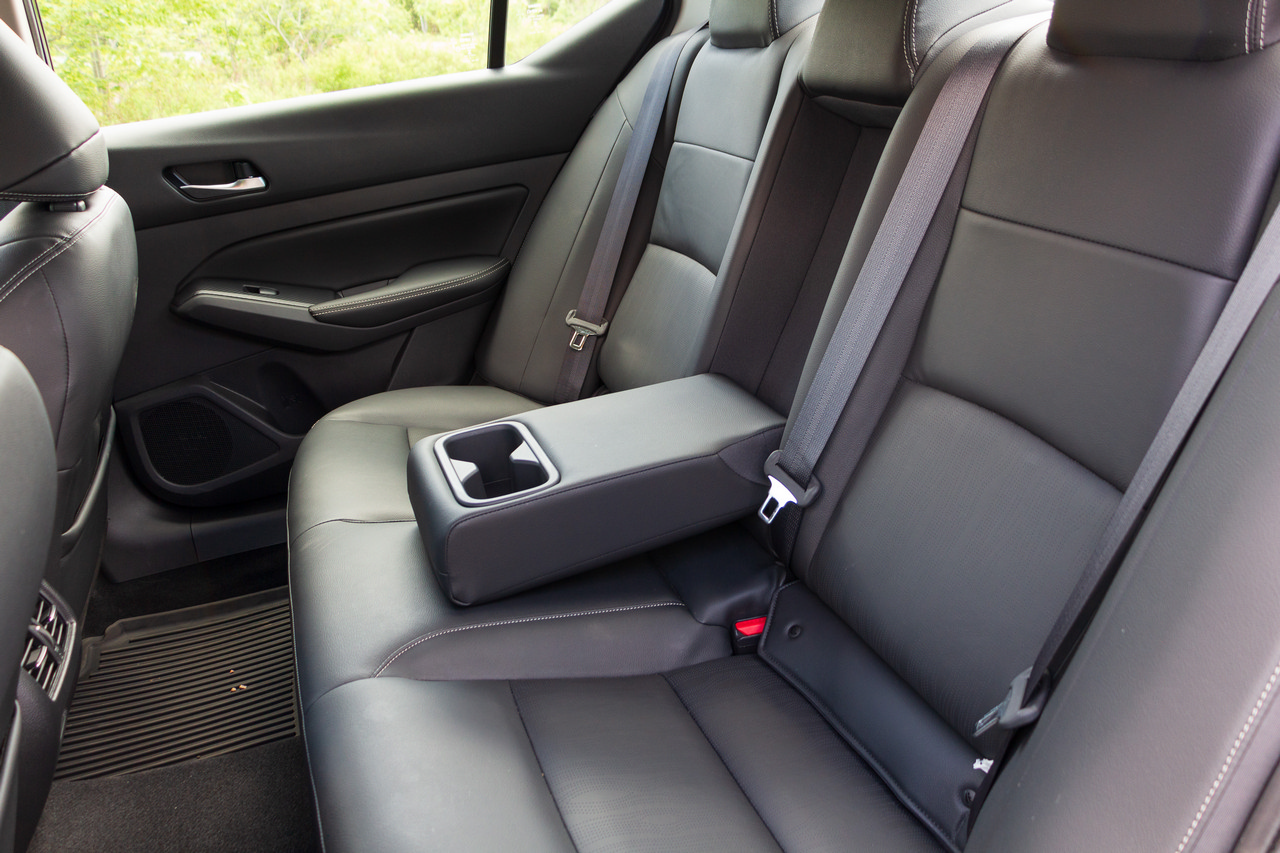 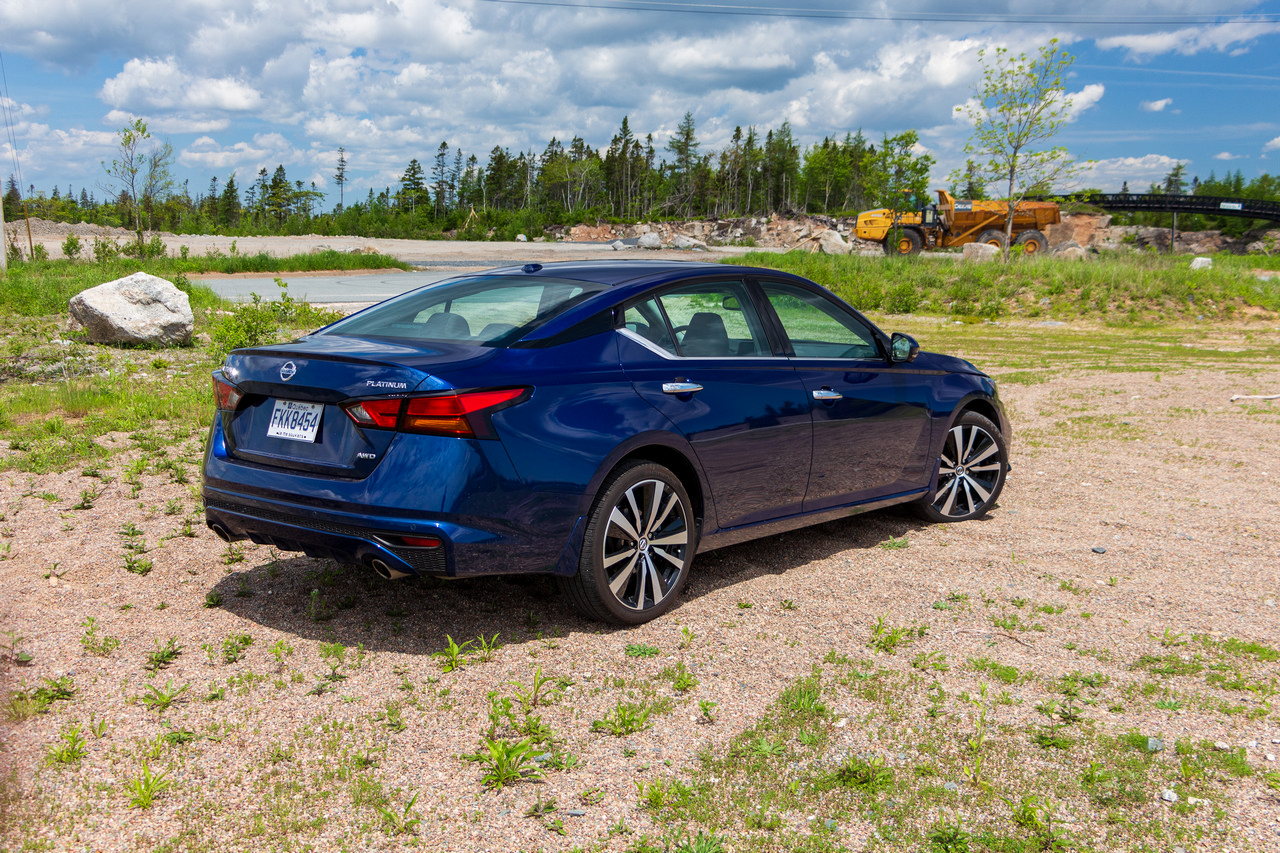 In general, the materials here were good. The plastics were a bit hard, but the wood trim on the Platinum adds warmth to the cabin. What looks out of place, though, is the faux carbon fibre on the door panels. Plain black plastic would have been a better choice. Or, even more fitting, more of that wood.

The point of the big sedan is moving people, and this one did it well. Plenty of space for four adults. Loads of rear legroom and good headroom. Though like many modern sedans with their lower rooflines and a sunroof, headroom is tight for passengers over about six-foot three, front and rear. At 436L, the trunk space is about average.

Nissan has loaded the new Altima with active safety tech, too, including the automaker’s ProPilot Assist semi-autonomous driving. It handles the gas and brakes, as well as helping you keep the car centered in your lane, even through corners on well-marked highways. It works unobtrusively but gives you a bit of a tug when you’re trying to avoid potholes. The new Altima also gets rear cross traffic alerts, forward collision warnings with emergency braking and pedestrian detection.

So, Mr Phone Company representative, this is a car that seems to offer exactly what you’re looking for. And since Game of Thrones is over, I’m not just saying that to get free HBO. It’s got all-wheel drive sure-footedness and is more fun to drive than any comparable crossover. It also offers loads of safety kit, excellent ride comfort, and fuel economy that’ll make you think you’re in a subcompact not a midsizer. Letting you go well over 800 km per tank. This might be just the ticket to try and pull buyers back before they cross over forever. 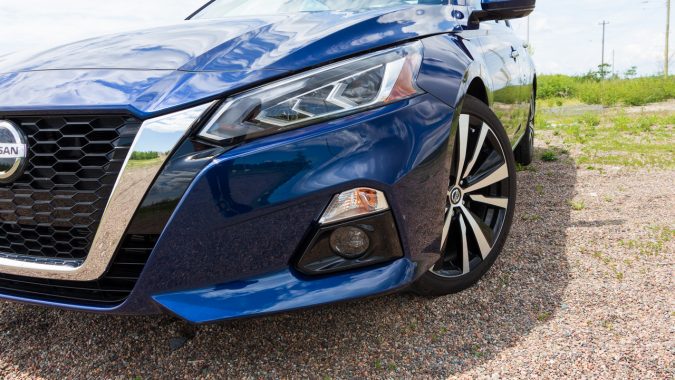 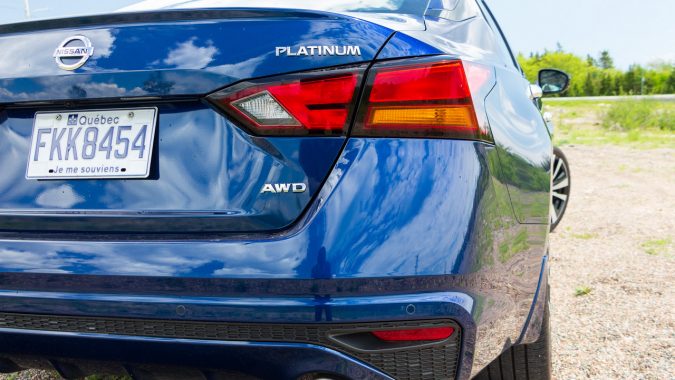 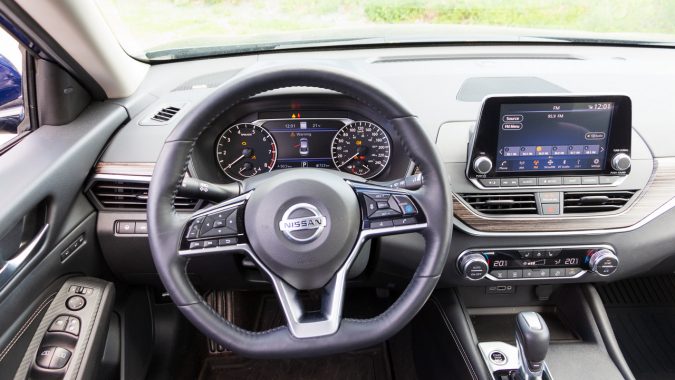 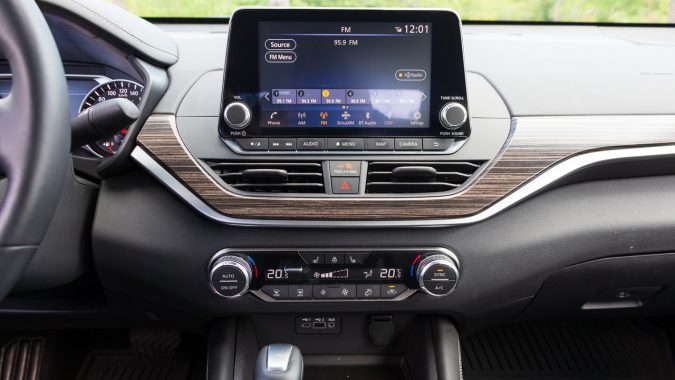 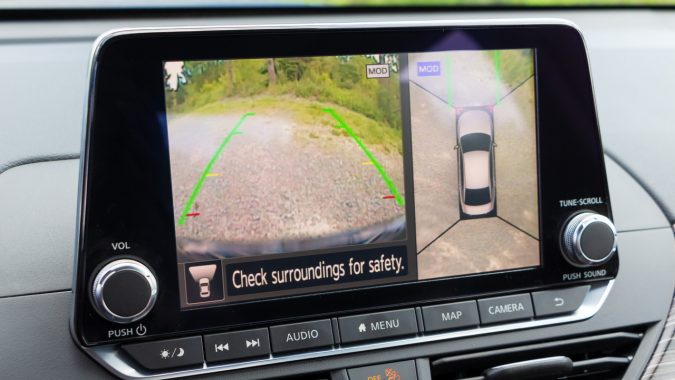 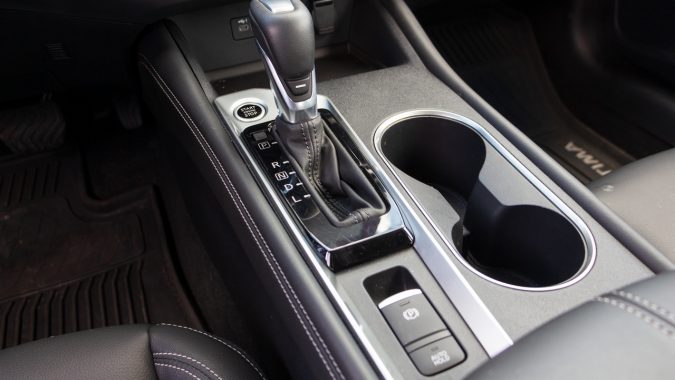 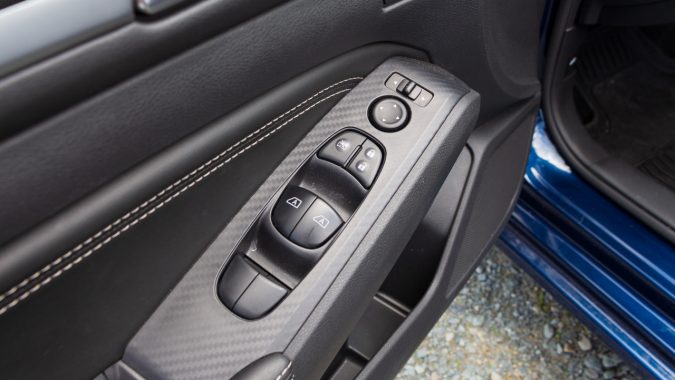 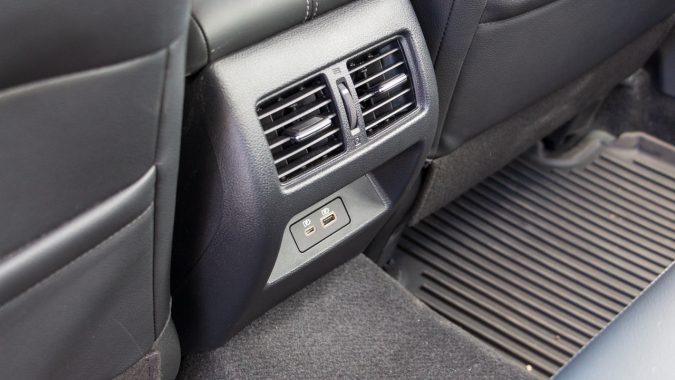 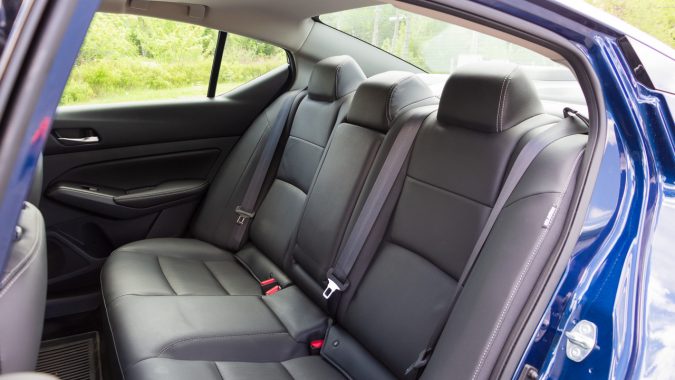 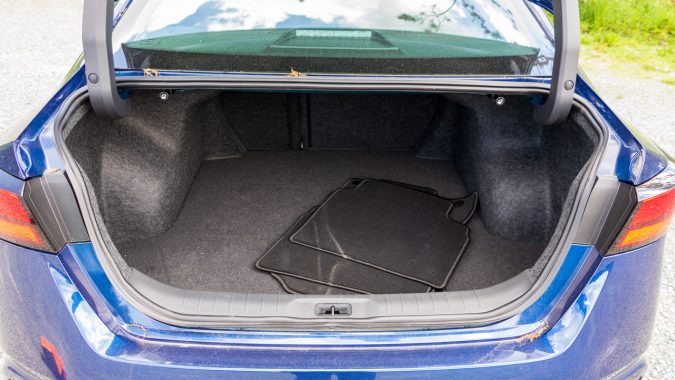 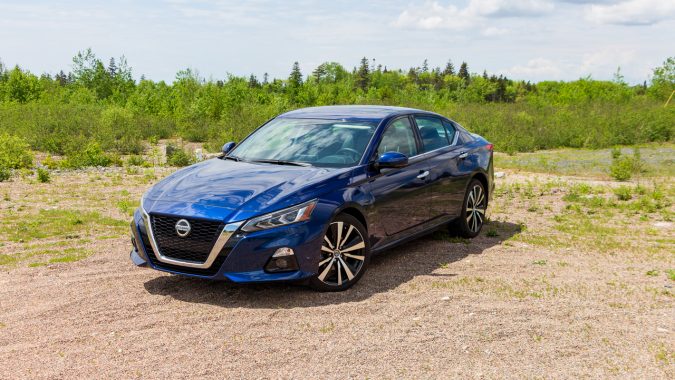 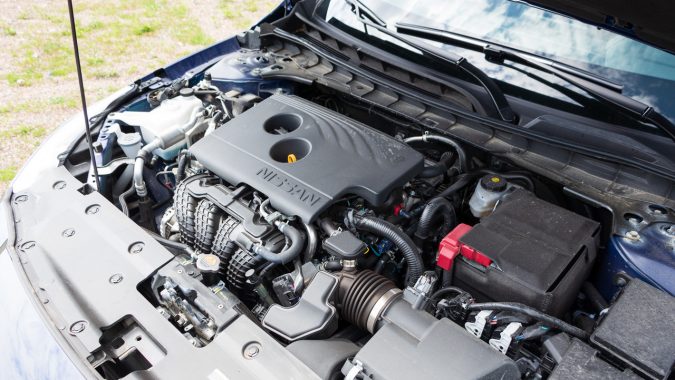 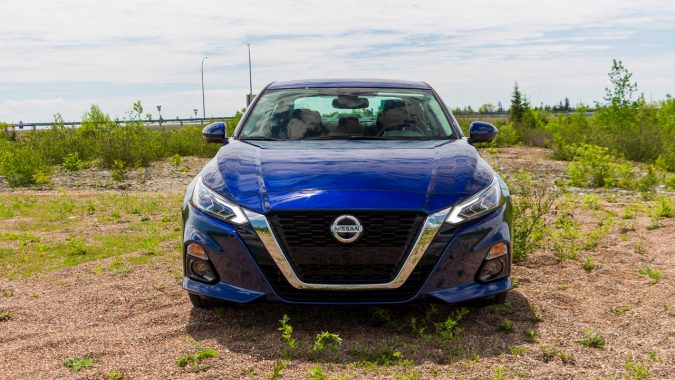 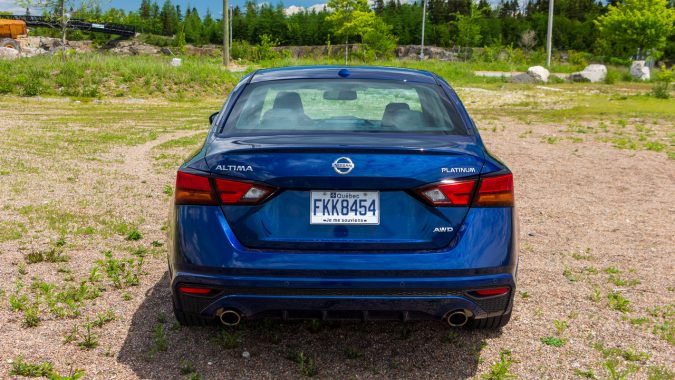