First Drive: GMC have done wonders with the new Terrain, the new exterior styling is a far cry from its predecessor, its now smooth and contoured lines have made the Terrain much more pleasing to the eye.

LAC BEAUPORT, QC – The GMC Terrain has been with us for over seven years now without much of a change.

The first generation was angular, boxy and looked like it would push the air out of the way ahead instead of cutting gracefully through it.

Not that it put many people off buying one. In its life span it has sold over 700,000 vehicles in North America alone. 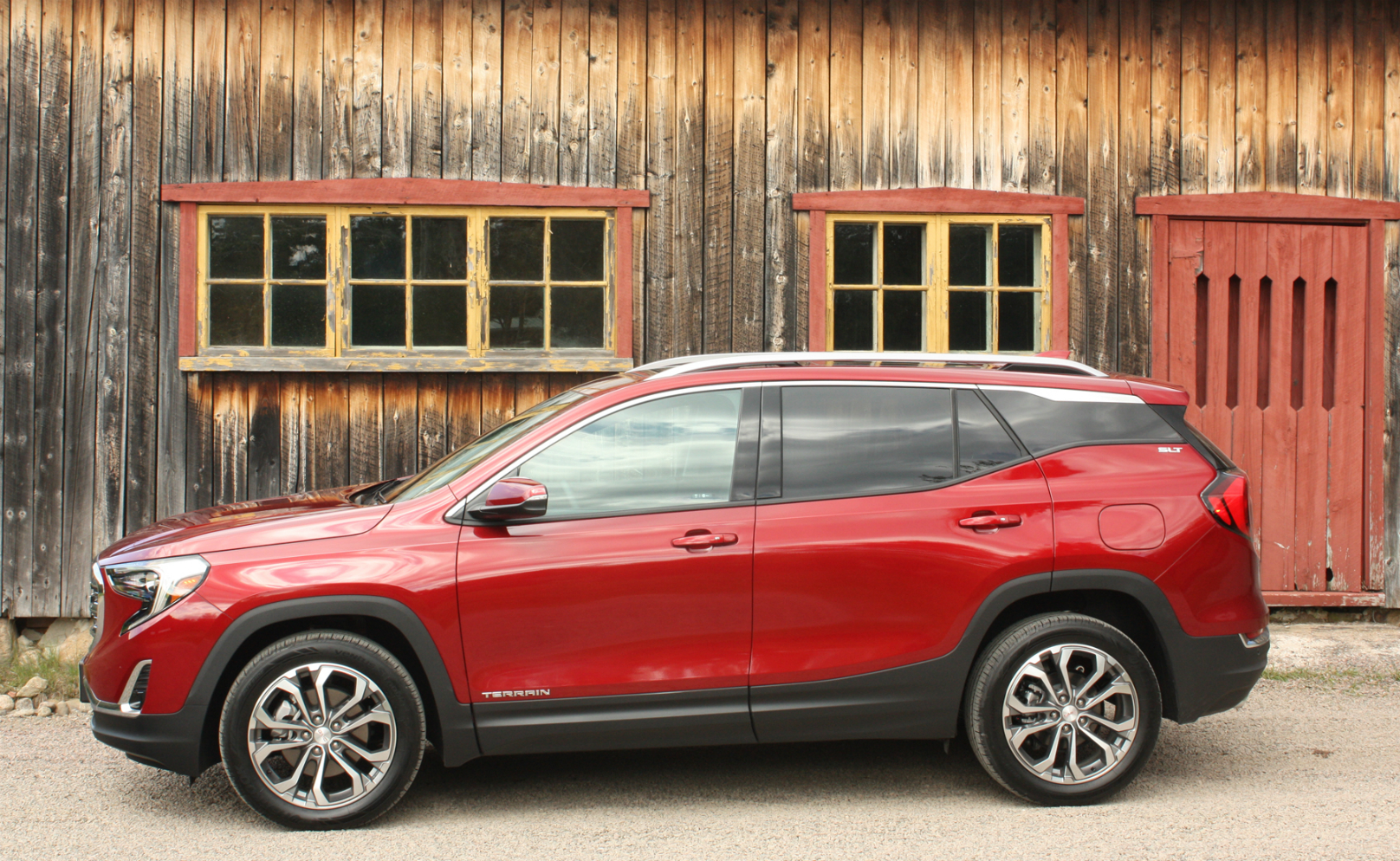 The design engineers have got their sanders and grinders out and smoothed every angular edge and body panel away. It is now sleek, contoured and attractive from the outside with a plethora of safety & infotainment enhancements and some clever storage aspects on the inside.

The base, 1.5-litre four-cylinder, turbocharged engine is standard in the SLE trim and pushes out 170 hp and 203 lb/ft of torque through the new nine speed automatic transmission.

Offered, as an option on the SLE but standard on the SLT and Denali, is the 2.0-litre four-cylinder engine that is matched to the same nine-speed transmission and pushes out 252 hp, 260 lb/ft of torque. 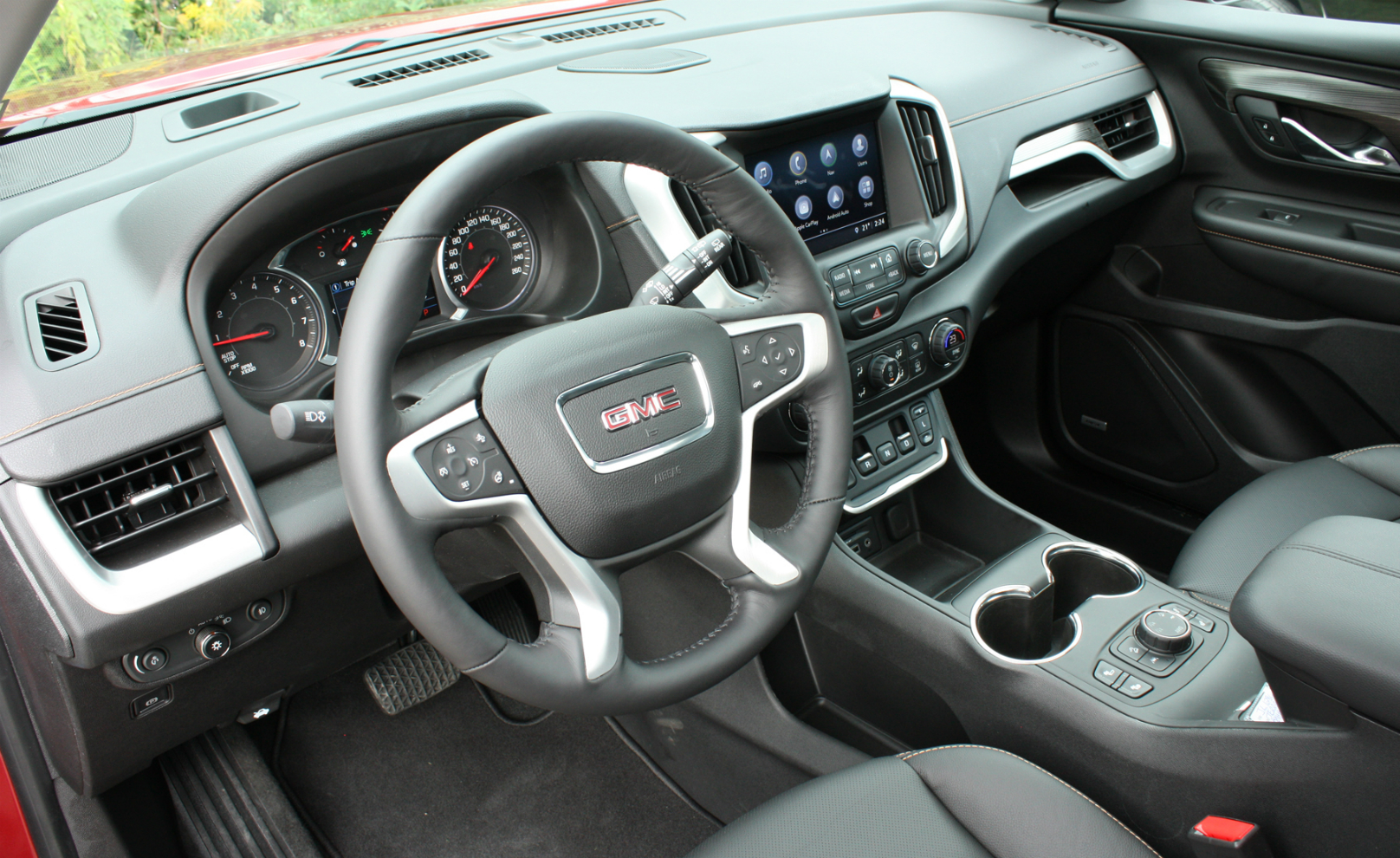 The new 1.6-litre turbo-diesel is offered as an option on the SLE and SLT models and is matched to a six-speed automatic transmission and produces 137 hp, 240 lb/ft of torque.

All-Wheel-Drive is offered as an option on the SLE with it being standard on the SLT and Denali trims.

GMC have moved away from the traditional gear lever and have introduced new gear selector buttons (Electronic Precision Shifter) lower down on the centre column.

The buttons pull back (akin to window switches) rather than being push button therefore eliminating any possible accidental engagement.

Another clever addition is the Low gear feature – once activated it drops the transmission down two gears to introduce engine braking on a long descent. There is an option, by means of two small switches, of dropping down more gears to increase the amount engine braking or upshifting to reduce it.

The new gear button configuration works seamlessly with both the six- and nine-speed transmissions but adds extra storage space in the central consul with the elimination of the gear lever.

The new Terrain comes with GMC’s Traction Select system for different driving conditions, and is available in both front-wheel-drive and all-wheel drive. 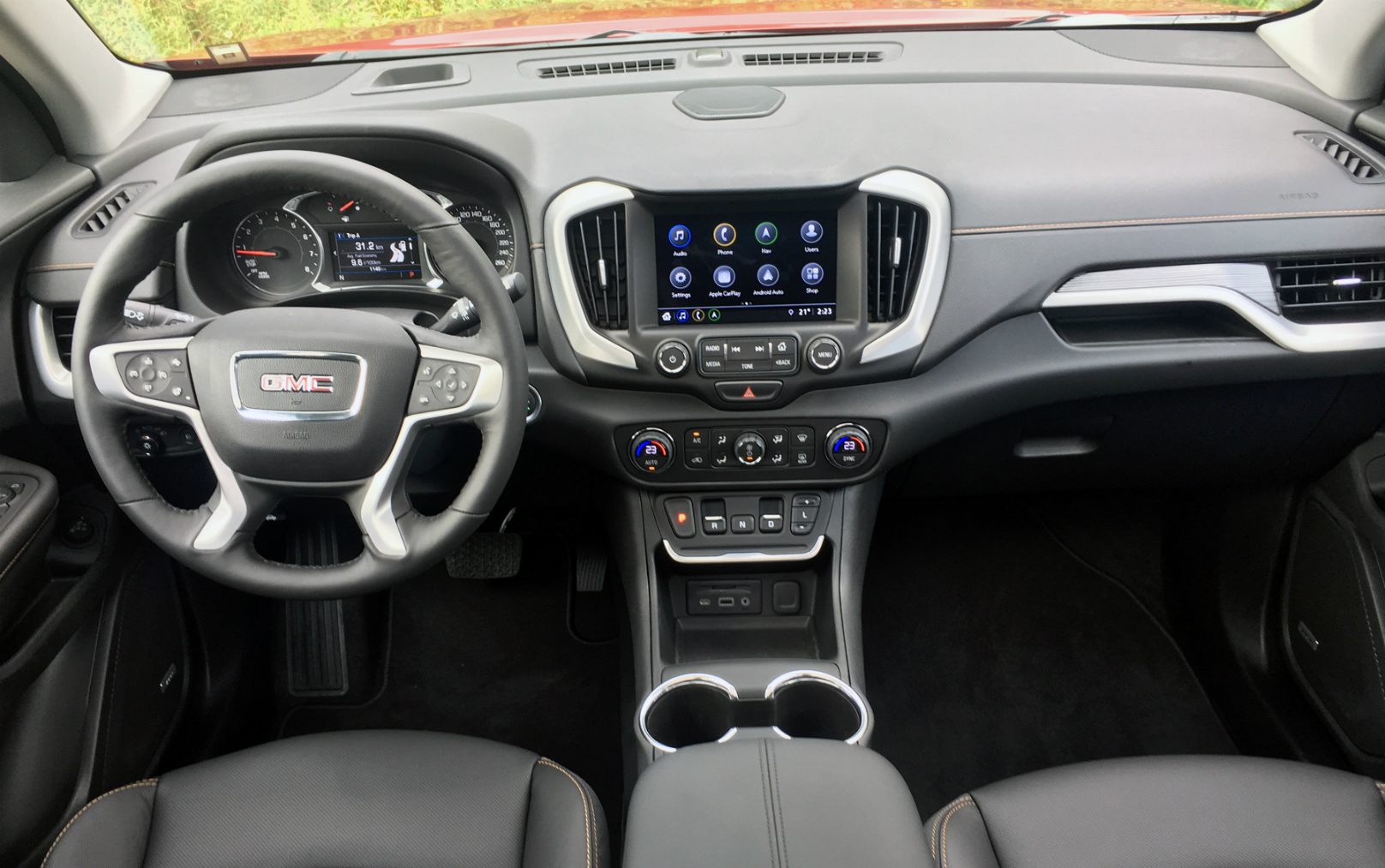 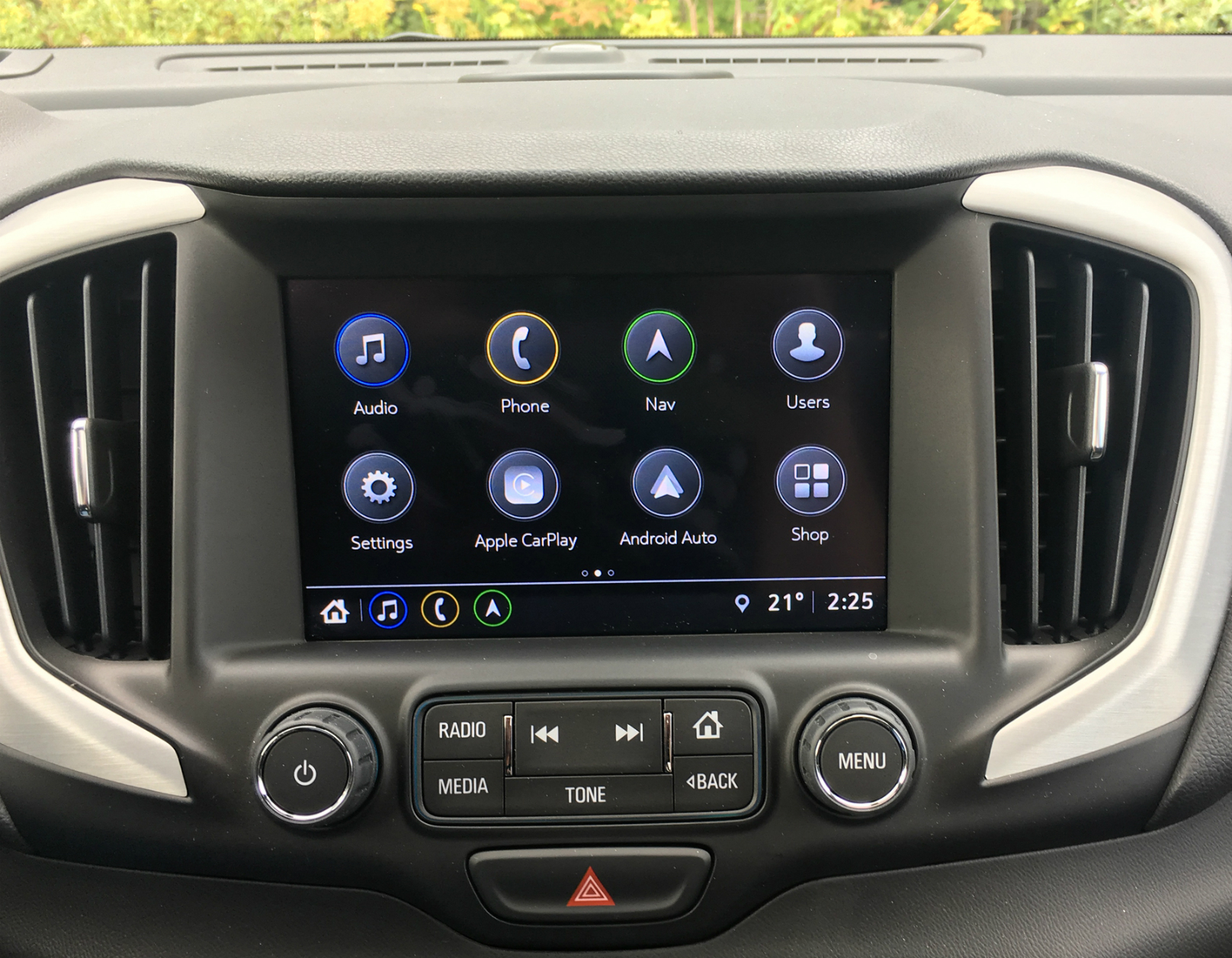 The cabin has been finished off with top-notch soft touch materials accentuated by real aluminum finishes.

The dash is uncluttered and neat with the instrumentation easily read.

Taking centre stage is the GMC IntelliLink infotainment system. It comes either with a seven inch touch screen on the SLE trim or eight inch touchscreen with the SLT and Denali.

The apps are large and easily operated and moved with swipe and pinch movements. It also includes a number of connectivity options, including a 4G LTE WiFi hotspot.

Another neat feature of the infotainment system is that it can store up to five separate user profiles that can be personalized for music, screen set-up and navigation. The system is also compatible with Android Auto and Apple CarPlay.

Although the Terrain is smaller on the outside you certainly don’t get that impression from the inside. 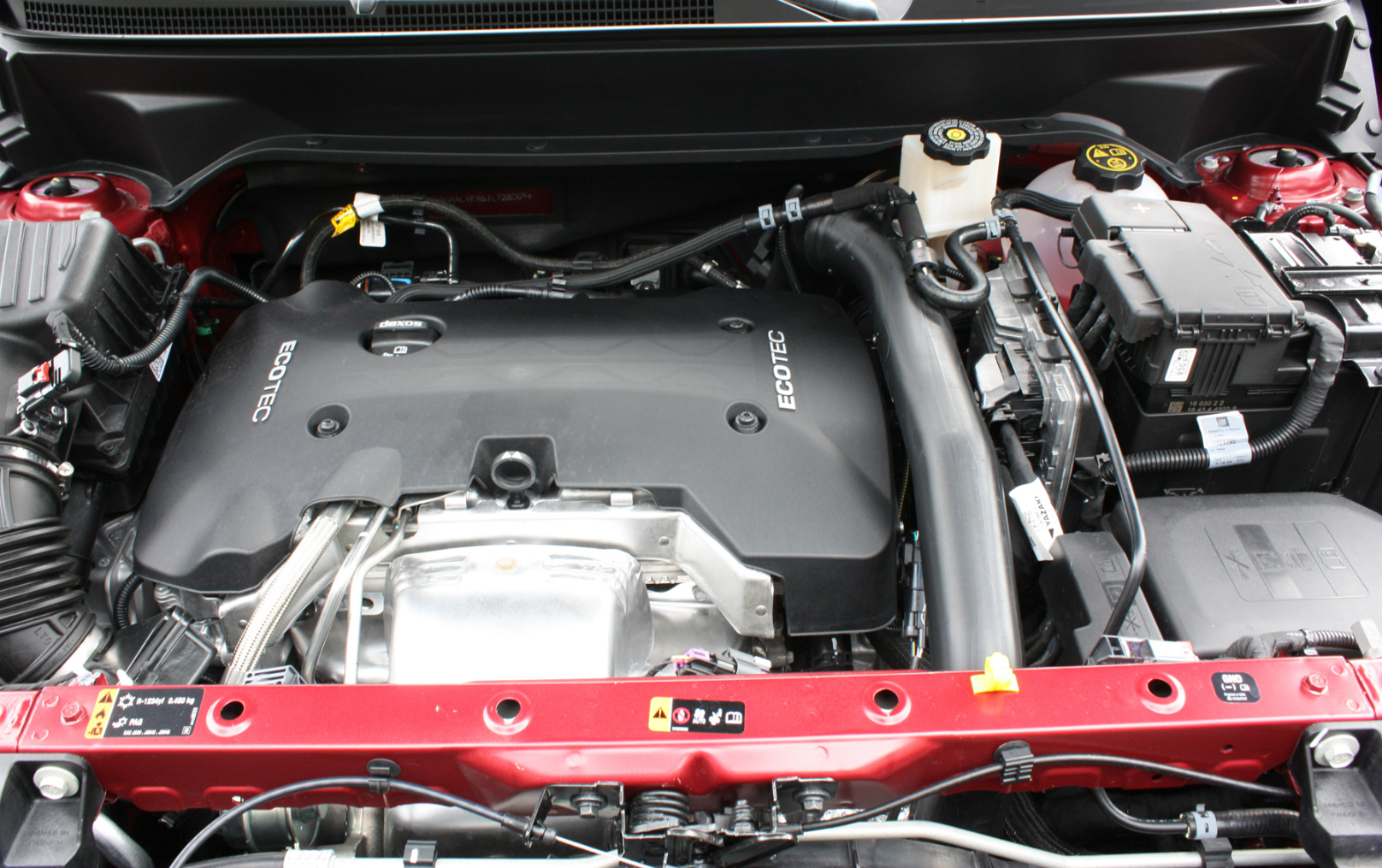 The cabin is fresh and airy and even more so with the addition of the panoramic sunroof. The rear seats now fold flat leaving the storage floor area nearly completely flat.

A new very clever aspect of the seat configuration is that the front passenger seat that now folds flat-allowing items up to 3.7 metres in length to be accommodated with the tailgate closed completely.

The 2.0-litre engine was smooth and responsive; it reached highway speeds without any complaints while still being quiet.

The 1.5-litre was doing a little more work at the bottom end, but once up to speed had no issues at all.

The diesel has a bit of a buzz from the engine but GMC have done a great job of eradicating any of the usual clanks and clunks associated with a diesel engine.

There are a number of driver safety features available Blind spot monitoring and cross-traffic alert are part of the Driver Alert I package on the SLE and SLT and is standard in the Denali but to get forward collision alert with low-speed autonomous braking, lane departure warning with keep assist, and automatic high-beams you have to opt for the Driver Alert II package.

Over all GMC have done wonders with the new Terrain; the new exterior styling combined with a superior ride quality has taken it to the next kevel.

The clever use of interior space and upgraded soft touch materials, combined with a sophisticated infotainment system will make this a real contender in what is a very tight market segment. 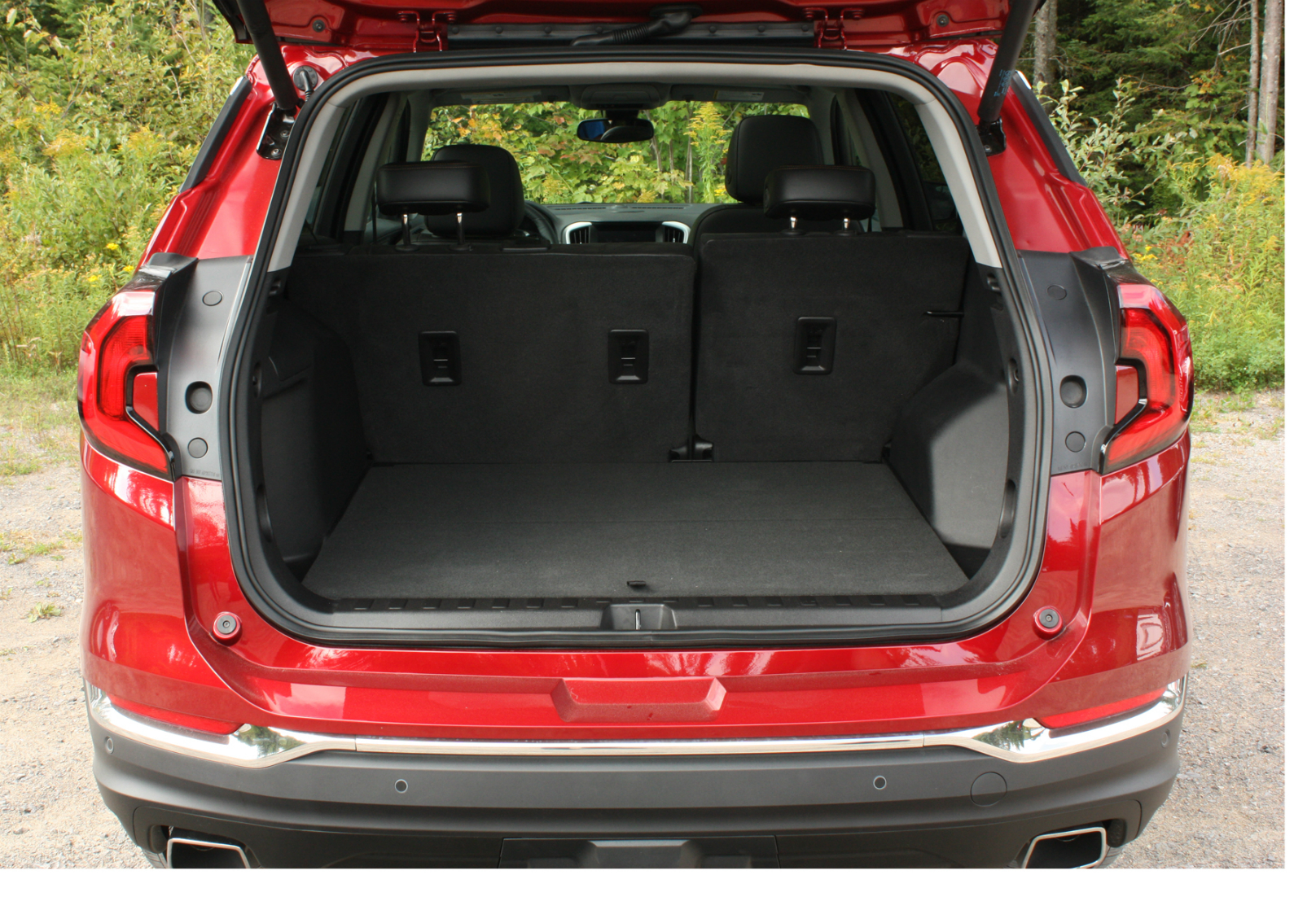 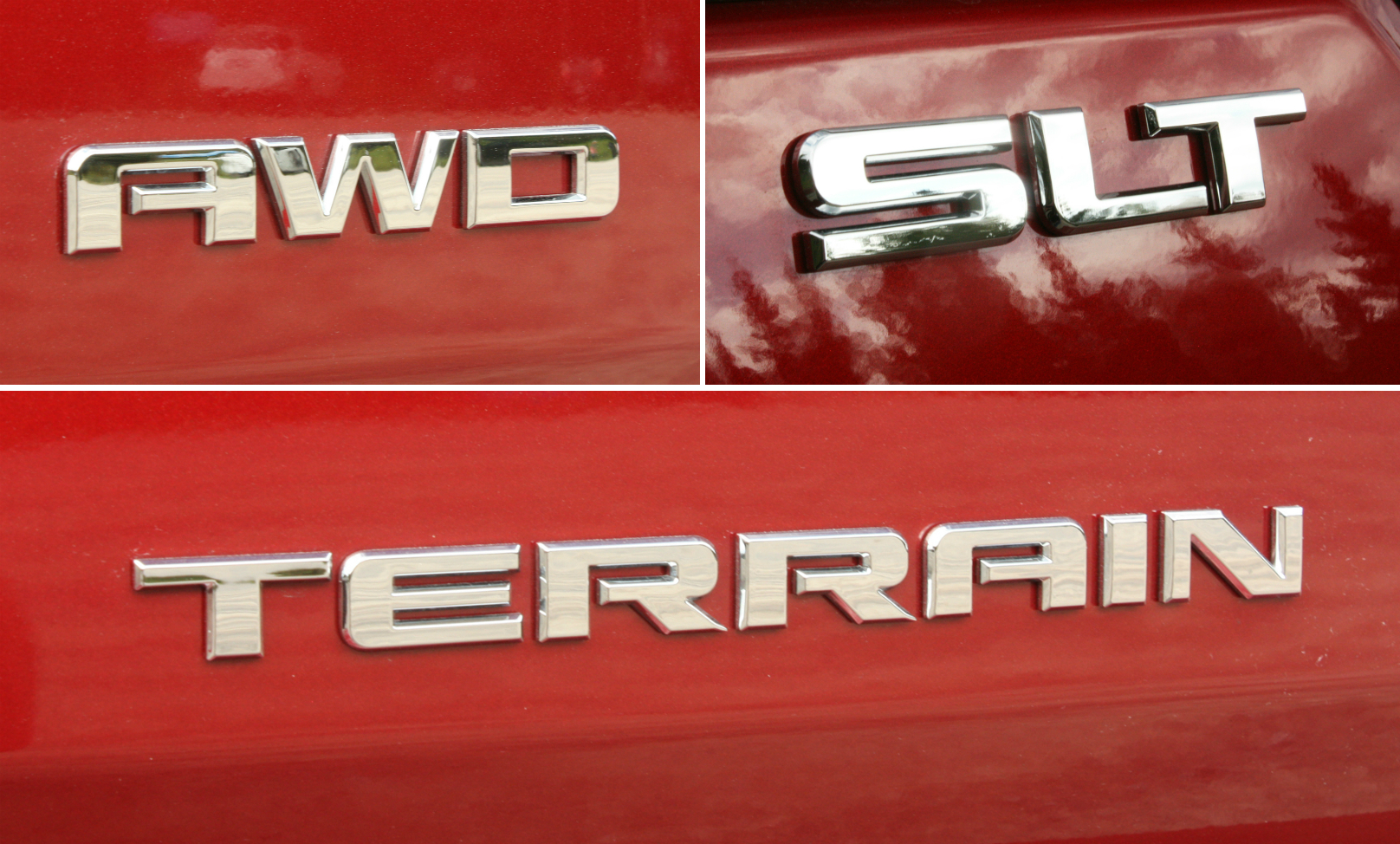