Two of the most famous names in sports-car history.

Two of the most famous names in sports-car history.

I drove their latest models — not back-to-back, but within days of each other.

Both are two-seat midengined coupes with legendary racing heritages.

Both have a dual-purpose nature, although one has a broader bandwidth than the other.

Yet few people will consider both as their next sports car purchase.

A big part of that answer — one costs nine times as much as the other.

The Lamborghini Aventador SVJ, and the new Chevrolet Corvette Stingray, a.k.a. the C8.

Not really. There are many interesting similarities and contrasts. 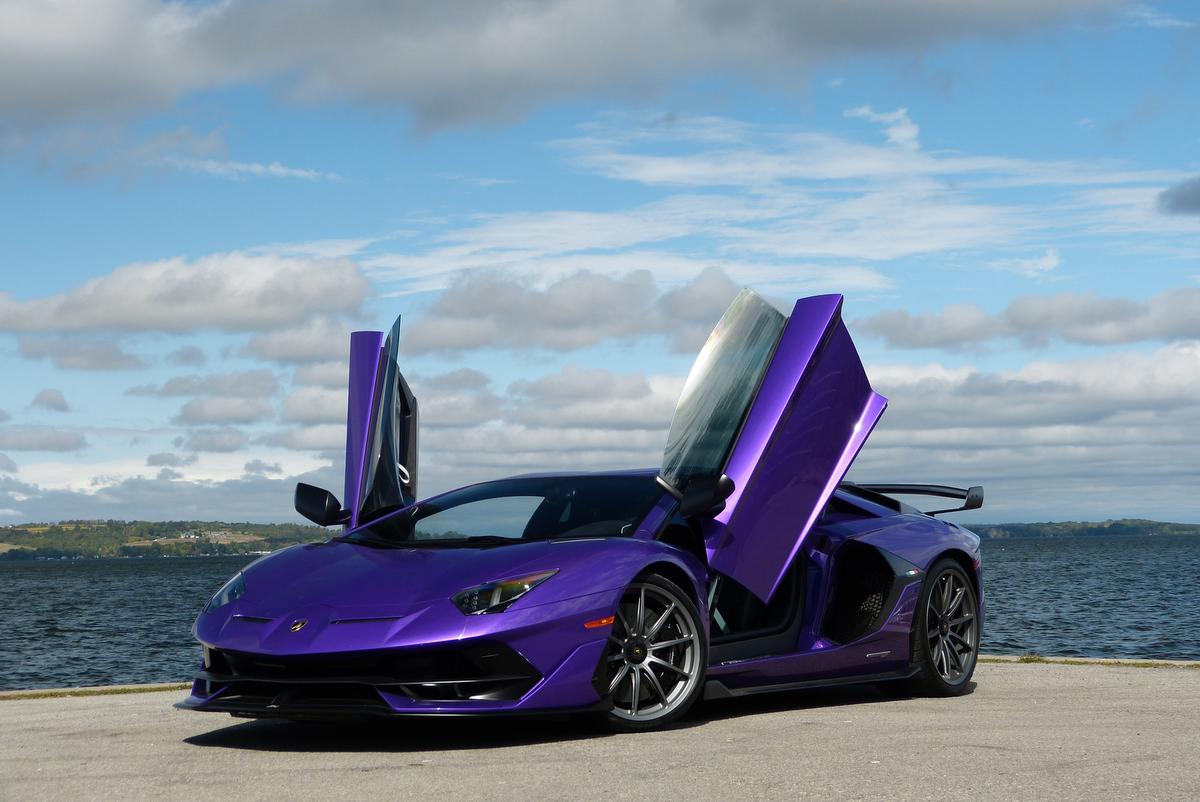 Despite being an Italian company, Lamborghini has always used Spanish names, typically those of famous fighting bulls.

Aventador was one of those.

The letter “J” — “jota” in Spanish — refers to Appendix J of the FIA (Federation Internationale de l’Automobile) which designated the rules for racing back in the early days of Lamborghini’s competition history, and it has stuck as the term for their most race-worthy models.

Add that to SV — Super Veloce (“super fast”) — and you have the Aventador SVJ.

Aventador is almost a decade into its lifespan, and, traditionally, the “J” version of any Lamborghini represents the swan song of that model. An all-new range-topping Lamborghini is expected next year.

But Aventador was well ahead of the game at its launch, especially when it came to its construction.

It is surely the most carbon-fibre-intensive car in anything approaching mass production, although around 10,000 units in its lifespan would constitute about a minute and a half’s worth of Chevrolets.

The SVJ model has several upgrades which make it even more compelling.

The “Aerodinamica Lamborghini Attiva” system of aerodynamic aids, thankfully shortened to ALA, is a collection of vents, fins and wings designed to reduce drag and improve grip.

The “Dinamica Veicolo Attiva 2.0 system” (“LDVA 2.0”) can adapt the aero bits to the car’s specific situation — accelerating, braking, cornering — all in the pursuit of better performance.

The four-wheel drive and four-wheel steering help put all this performance to the pavement.

More important, its massive carbon-fibre brakes will haul the car from 100 km/h to rest in just 30 metres.

The huge rear spoiler, part of that alphabet soup of aero kit noted above, means visibility to the rear is approximately zero.

Not that anything is likely to be gaining on you, but reversing can be a bit of a trick. Good job there’s a rear view camera.

But this car isn’t about backing up. It’s about going forward.

But first, you have to get in. Only the limber need apply.

Once ensconced in what appear to be racing bucket seats, you face a series of minor controls that will take some familiarization, a colourful instrument cluster and minor controls and a SatNav system that appear to have been lifted from corporate cousin Audi about ten years ago.

Because that’s effectively where they came from.

The door locks also retain VW/Audi’s irritating habit of relocking once you exceed about 15 km/h, even if you have manually unlocked them.

Fire up the magnificent engine, select a ratio from the shift knob or the steering wheel paddles, and off you go.

One thing about extremely visible cars. Because you stand out so much, you (well, I, anyway) tend to drive more slowly. No need to excite the local constabulary.

I did get the chance to open it up a few times on some back roads. Needless perhaps to say, this car is fast.

I did leave the traction control system active. No particular desire to bring the car back on a flatbed.

But there is no doubt this is a serious motor car.

Despite the prodigious power, the handling is surprisingly accessible. Sure, you must pay attention. But for a car effectively designed to be a “customer race car,” it’s not difficult to get down the road.

My main complaint is the transmission. I played around with the drive mode selection, which offers “Strada” (street), “Sport” (you can surely guess) and “Corsa” (race) modes that dial up various settings for suspension, steering, transmission and the like.

In Strada, the transmission tried to shift gently. Instead it just felt vague and sloppy.

Corsa improved the shift quality, but made the ride pretty hard,

I found Sport to be the best setting overall.

The suspension is stiffer than the Aventador SV, but the magnetorheological dampers, which can firm up instantly as needed, keep ride quality within reasonable limits.

You can also raise the nose of the car by about 30 millimetres to ease you over speed bumps or when accessing filling stations. Which you will have to do fairly frequently.

If you forget to lower the car again, it automatically does so when you reach about 35 km/h.

The Aventador SVJ is not a car for the faint of heart. 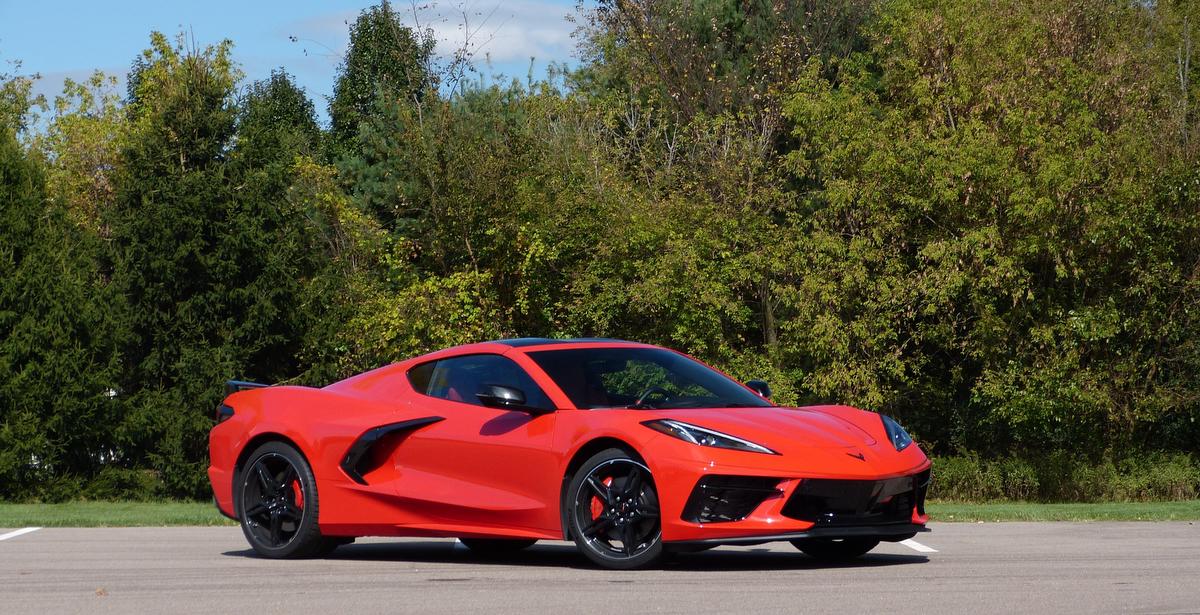 The 2020 Corvette Stingray is as new as tomorrow.

As noted earlier, it’s the first production midengined Corvette ever, although they have built several concept cars using this configuration.

It is made from a variety of materials, although fibreglass — a part of Corvette from its inception nearly seven decades ago — remains a big part of it.

The engine is perhaps the one significant holdover from the former models, being the 6.2-litre LT2 V8, a fairly major rework of the LT1.

These are significantly below Aventador SVJ’s numbers, yet Chevy gives a zero to 100 km/h time of three seconds, just a couple of ticks behind the Lamborghini. Chances are that gap would widen as the speeds rose, although in our country that’s more-or-less irrelevant, apart from bragging rights.

At this point, no other powertrain options have been announced, but they will certainly come. Bigger engines, more power, possibly turbo and/or hybrid applications, and four-wheel drive are all being considered.

The V8 we get for now is bolted to a new eight-speed dual-clutch manumatic transmission. No pure manual transmission at this point, and given that most high-end sports cars have all but abandoned them — why buy a supercar that goes slower? — one may never appear.

My two sessions in the new Corvette were all too brief, and were confined to urban roads with a short blast along an Interstate.

But it gave me a good idea of the breadth of performance available in this car.

Like Aventador, Corvette does not have gull-wing doors, so getting in requires a bit of flexibility.

Once inside, you cannot help but be impressed with the layout and the execution.

The instrument cluster surrounds the driver and displays all the relevant information brightly and clearly.

A long row of switches on the centre console takes care of the minor functions, and it must be said that it will be much easier to get used to the Corvette than to the Lamborghini.

Like most midengined cars, you have two storage areas, one in each end. The rear one can actually accommodate two golf bags. Yes, with clubs in them.

The big V8 gives out a purposeful V8 burble as you pull away. Acceleration can be gentle or fierce; it all depends on your right foot.

The transmission shifts seamlessly no matter how hard you work the car.

You can only tell so much about handling on a public street route like this, especially with a Chevy engineer riding shotgun.

But it’s clear this is a potent piece of machinery.

Yet it’s as docile as a kitten if you’re not in the mood for messing around.

The car looks stunning, inside and out.

Its performance, ride and handling are all stunning.

What’s most stunning — ah, you guessed from my opening — is its price.

If there is — if there ever has been — a better bargain in car-dom, I couldn’t imagine what it would be.

Can’t wait for more time in this fabulous car.