HOCKENHEIMRING, GERMANY—Did I want to go to the every-other-year site of the German Grand Prix and drive some super powerful Mercedes-AMG sports cars on the track?

Hey, it’s pretty much what I do…

Even if we would have to drive some of them from the AMG factory in Affalterbach a couple of hours away and back, on beautifully paved German B-roads and speed-limit-free Autobahn?

Won’t be a problem…

First, a bit of history. The SLS AMG coupe, launched in 2009, was the first Mercedes-AMG model completely developed by AMG.

That car resurrected the famous “gullwing” doors from the original mid-1950s 300 SL.

He noted that some customers didn’t like them because they got wet getting in and out of the car in the rain. Others absolutely loved them for their uniqueness, and the connection to the original 300 SL.

“Maybe in another 50 years we’ll do another gullwing car to continue that tradition!” he said.

Who says German engineers can’t be a bit whimsical?

In any event, you will have to deal with conventional doors in what is now the first major upgrade on the AMG GT since its launch.

Prices for the cars won’t be finalized until closer to their launch date. 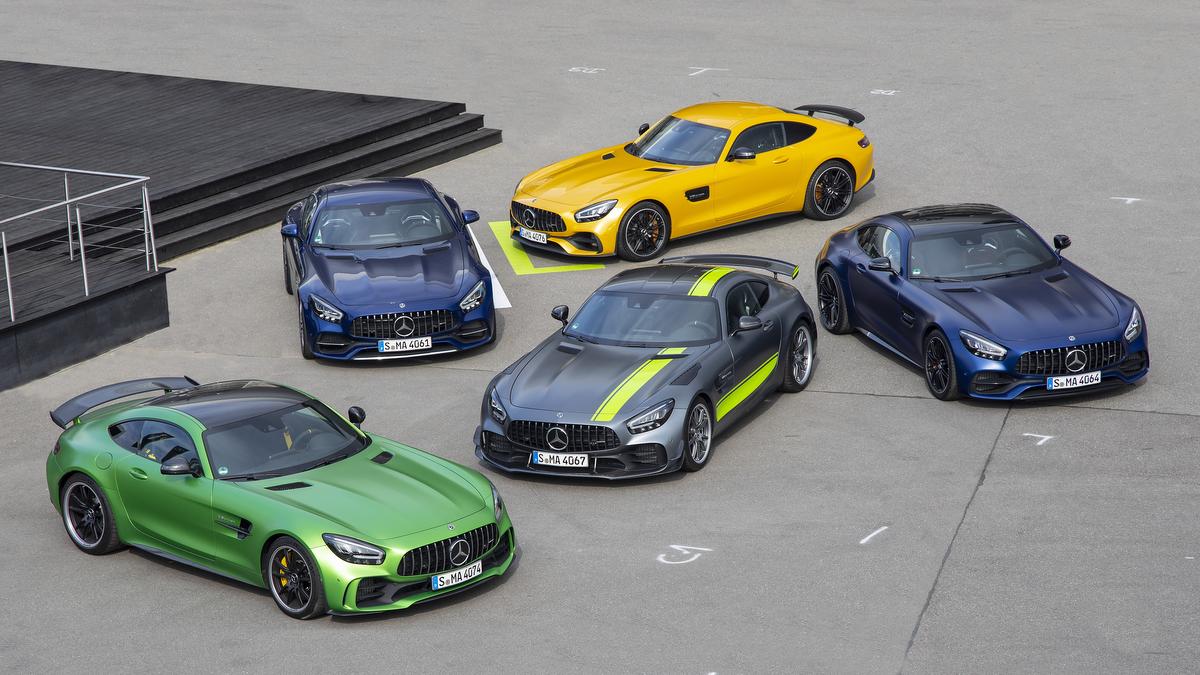 The closest benchmark would the AMG GT C, which currently lists at $163,000.

A new GT R model ups the ante on several vectors. There will also be a limited-production GT R PRO model which brings a very nearly track-ready car to your driveway.

While similar in mechanical details to the European version we drove last week, our GT R PRO will not get the full-race option with roll cage, racing seats and harnesses because apparently it does not meet some Canadian and/or U.S. safety crash standards.

How a car with those safety features can be less safe than one without them you would have to discuss with the relevant bureaucrats.

As if there was such a thing as a relevant bureaucrat…

AMG began as an engine tuning company in 1967. It evolved largely through motorsport into building complete cars, usually based on Mercedes models. In 2005 it became the in-house “performance” sub-brand for Mercedes.

The 2020 AMG GT gets revised styling front and rear, which in the AMG tradition is also functional, resulting in up to 100 kg more downforce to keep the car stuck to the tarmac.

It also comes with new LED headlamps, rear diffuser, dual-twin exhaust pipes and wheels, along with some cosmetic changes which seem primarily for model year differentiation.

The interior also receives many upgrades, some of which debuted in the four-door AMG GT.

For example, the 12.3-inch — yes, even the Europeans measure these things in inches — fully digital instrument cluster which gives you the choice of “Classic,” “Sporty” or “Supersport” layouts, which you can tailor to your driving style or mood at the time.

As always with these screens, it will take you awhile to learn where to find the button you want — it took us what seemed like forever to turn down the volume on the radio. It’s a button on the steering wheel which seems to mean the navigator can’t do it, although there must be another one elsewhere.

A host of other functions can also be controlled from that new steering wheel, on the not unreasonable theory that when you’re pounding along at full chat, you don’t want to be fumbling for a switch on the centre console.

Hardcore racey types will love the AMG TRACK PACE data logger whereby you can select layouts for various race tracks and compare your times lap by lap. It will record all the embarrassing data of just how slow you are, but gives you hints as to how to get quicker.

The 4.0 litre twin turbo V8 engine is available in four states of tune, of which we will get two.

A higher and broader torque band you would have difficulty finding until you look at the GT R’s number — 516 lb.-ft., at the same r.p.m. levels.

It all feeds into a seven-speed dual-clutch manu-matic transmission nestled in the rear axle. Combined with the rearward location of the engine — ahead of the cockpit but largely behind the front axle centre line — this gives the car a slight rear weight bias, the better to put all that power to the rear wheels.

As always, an AMG car starts with a very stiff aluminum structure.

The GT R PRO gains a fully adjustable coil-over suspension with dampers that can be adjusted for compression and rebound characteristics to the driver’s preference with the flick of a wrist, no tools needed and without removing the dampers from the car.

The GT R PRO uses KW dampers, while the other models use units from ZF Sachs.

We started at AMG’s headquarters in Affalterbach. After a brief technical presentation we jumped into the brightest, shiniest car we could find, a brilliant yellow coupe. Turns out it was an “S” model, which we didn’t discover until later was a model we would not be getting.

No worries; what’s a handful of horsepower between friends?

Actually, its European horsepower rating of 552 is a couple of pferdes (German horses, dontcha know…) higher than the GT C model we will get, so it would be roughly comparable.

In any event, this car does not lack for grunt.

We had been warned that the polizei were out in force, even on the B highways. Knowing we would have plenty of time at Hockenheim, we didn’t feel the need to push it very hard on public roads.

Instead, we enjoyed the ambience of the cockpit, and the calmer side of the car’s dual nature.

While many AMG GT owners will spend time on their local tracks, most of the time they will be cruising, or maybe attacking some twisty two-lane blacktop.

In any of these duties, the car is quite lovely.

I found the seats comfortable and supportive. I must say that not all members of our gang agreed, finding them a bit too restrictive.

Performance is brilliant. The massive low-end torque means you are off RIGHT NOW.

The dual-clutch gearbox shifts immediately and seamlessly as they always do.

You have a choice of driving programs via the Dynamic Select system. Six preprogrammed settings — “Slippery,” “Comfort,” “Sport,” “Sport+” and “Race” adjust engine and transmission response, steering, suspension damping and exhaust sound to suit. The sixth, “Individual,” lets you choose your own settings for the various parameters.

Spoiled for choice, we typically settled on Sport+, although German roads as noted are in excellent shape. Back home we might have gone for Comfort.

Once at the track, the fun began, getting out on the circuit for lead-follow laps with two or three cars in a group, headed by an AMG driving instructor.

The key here is to try and go out with other members of the press who have roughly similar driving ability, so they won’t slow you down (or vice versa…).

More by good luck than good management, I managed this in both my sessions.

Our instructor was five-time Deutsche Tourenwagen Meisterschaft (German Touring Car racing champion) Bernd Schneider, who literally grew up at Hockeheim, so he knows this track perhaps better than anyone.

I have driven behind Bernd on a number of occasions, and once he knew that each of his ducklings had half a clue, he picked up the pace.

It was raining during our sessions, sometimes quite hard, which not only made the traction iffy, but also made visibility a challenge.

I always try to get right behind the instructor. If you’re behind another journo, especially in these conditions, you can’t always see, hence follow, the instructor’s line.

At one point I dared peek at the speedometer. I think it read 234 km/h, which in the pouring rain is plenty quick. The car grips ferociously, although I did overcook it at the end of one straight and got onto the run-off area.

No worries; we had left the directional stability control system on, and it bailed me out.

You have to resist the temptation of thinking you can stay with a guy like Bernd Schneider. Despite knowing you are in exactly the same car, you are not going to be anywhere near as quick.

Still, Bernd did say after our last session that our group had done a good job, and that we had been the fastest he had had all day.

OK, so maybe he says that to everyone, but it did feel good to hear it!

The drive back from the track into Stuttgart violated everything we know about commuting. We were heading in to town on a Thursday afternoon; why was everybody else not heading back home?

Turns out there was construction — those roads don’t get perfect by themselves — and a couple of fender-benders.

Still, this gave us another chance to evaluate the softer side of the GT’s performance. It is a comfortable, quiet place to spend some time.

One drawback? The car still has the unfathomable shift quadrant. Just about every car since the late-1950s has had an automatic shift pattern of PRNDL — Park, Reverse, Neutral, Drive, and Low. This one looks like that, except there’s no need for a “Low” range on a DSG gearbox.

But looks can be deceiving, because on this one (and other Mercedes models) they put in a push button for Park. Why, oh why, do they do this? Why not let the lever slide forward to Park like just about every other car in the known universe?

AMG GT owners are not likely to be one-car owners. And not all their cars are necessarily going to be other Mercedes. There is no reason whatsoever to make the driver have to remember to remember to push a stupid button when sliding the lever forward would do the trick.

But we all have our little peccadilloes. This apart, the AMG GT is a technical tour de force which rewards the driver with outstanding performance in a gorgeous and comfortable environment.

Can’t ask much more of any car, now can you?