The Slingshot is registered as a motorcycle and requires the use of a helmet — but oddly, only a “G” licence is required to drive it.

It’s entirely possible that the only way you’d get more attention than driving a Polaris Slingshot would be to strip naked in a town square.

Do not buy a Slingshot if you dislike having conversations with total strangers. Do buy one if you get a kick out of seeing heads swivel and kids giving you a thumbs up.

Seen head-on, it looks very, very angry. It’s low and wide, and features prominent canards that are more than a little reminiscent of Formula 1. Base Slingshots don’t even come with a windshield; the $30,999 SL model I tested comes with a stubby but effective plastic deflector. From any angle it’s positively a riot of angles, matte and gloss surfaces, and exposed structural elements. This thing makes Lamborghini’s current design language seem tame.

It’s at the rearmost third of the Slingshot where it gets weird. Really weird. Single rear wheel weird. The Slingshot is actually a trike.

The Slingshot is not an entirely new vehicle, having been introduced to the North American market in 2014 as a 2015 model. It is, however, new to Ontario, which only this spring finalized the regulations required to register vehicles of this ilk.

Unlike Bombardier’s Can-Am Spyder, which is motorcycle-like in layout (having handlebars and a saddle-type seat), the Slingshot is essentially a tube-frame roadster that happens to have a single rear tire. From the two side-by-side seatbacks forward, it’s like a conventional car, with a steering wheel, seatbelt, foot-pedal controls, and a manual gearshift lever. Neither fish nor fowl, it took time and some legal prompting for the province to act. The result is that the Slingshot is registered as a motorcycle and requires the use of a helmet — but oddly, only a “G” licence is required to drive it.

The Slingshot’s powertrain should be familiar to Pontiac Solstice owners, as it features a GM-made 2.4-litre Ecotec four cylinder and what I strongly suspect is the same five-speed manual transmission. A stubby driveshaft routes power to the transfer unit that drives the rear axle’s carbon fibre reinforced drive belt.

Producing 173 hp and 166 lb-ft. of torque, but only burdened by approximately 1,700 lbs. (770 kg), the all-aluminum Ecotec makes the Slingshot much livelier than its humble Saturn Ion origins might suggest — Car and Driver estimated a believable 4.6 second 0-96 km/h run on the way to a mid-13 second quarter mile. It’s flexible and energetic.

As you might expect from a manufacturer whose other product lines include ATVs, side-by-sides, and snowmobiles, fit and finish are not exactly Lexus-like, and they’re not meant to be. This is like a kit car that you didn’t have to build, and it comes with a two-year warranty.

The first concern that you’re likely to have with the Slingshot’s three-wheel layout is stability. Top Gear’s continual bashing of the British Reliant Robin — which typically results in a hapless Robin lying on its side — doesn’t help. But that English oddball has the single wheel in the front, a narrow track, and a high centre of gravity; a recipe for disaster. The Slingshot is really wide, wider than a Dodge Challenger, yet about as tall overall as a Subaru BRZ. With the majority of its mass centred low between the two front wheels, the true limiting factor is the traction limit of the rear tire, which will break free well before anything more exciting could potentially happen.

In the dry, that limit will occur at cornering speeds I was unwilling to explore either on public roads or in a vehicle borrowed from the local Polaris dealer. Once you get past the psychological hurdle, it can largely be treated like any sporty roadster, giving little additional consideration to bumpy surfaces, which unsettle the rear somewhat.

In the rain, wheelspin is more of an issue, though the standard stability system does a good job of keeping excess exuberance in check. Don’t worry: if you really want to paint a single black stripe or do doughnuts, the ESC is switchable, and the Ecotec will happily roast the 20-inch rear tire.

Although comfortable enough to pilot, creature comforts are non-existent. The Slingshot makes a Miata seem like a Rolls Phantom Drophead; no heater, no doors, and on base models, no audio system or windshield. This is an interior that, like any motorbike, is intended to get wet. You do get tilt steering, a large locking glovebox, and two weather-resistant lockable storage bins behind the front seats that will each accommodate a full-face helmet with space to spare.

Instrumentation includes a dead-accurate speedo, a tach, and a trip computer. Exterior lighting is full LED, except for the surprisingly good halogen headlights. 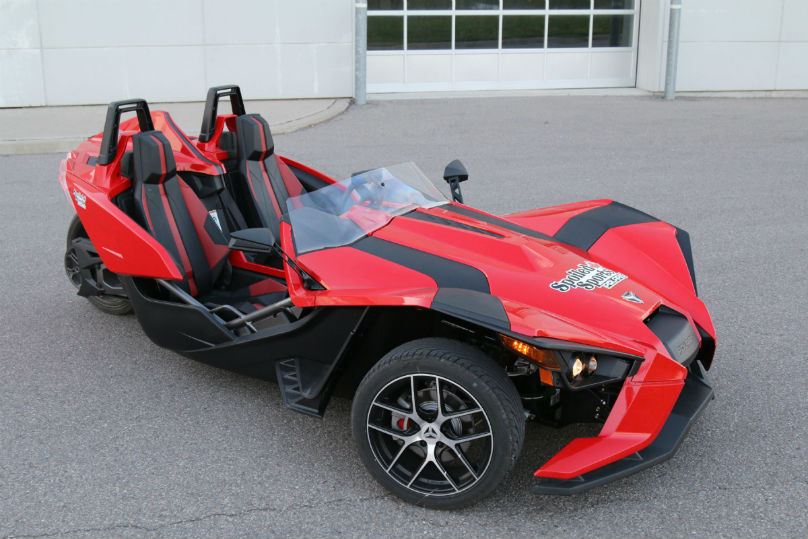 ACCESSIBILITY: Entry and exit from driver’s side requires some dexterity. Passenger side is slightly better.