Our artist friend had no trouble shuttling her basketry art to the Peer Gallery in Lunenburg, remarking that the Alltrack’s cargo area was noticeably more cavernous than that of her Crosstrek.

It won’t have escaped your attention that VW has been embroiled in a spot of bother lately. Handling fallout from its diesel emissions debacle has consumed an enormous amount of company effort. Seeing the need to shift the winds in its favour, VW has sensibly taken the opportunity to seek out new market opportunities. While making an abrupt turn in corporate focus at the world’s second largest automaker is undoubtedly like teaching an elephant to dance, history teaches us that it can be done.

Having its unique selling point ripped from its diesely little hands, Volkswagen cast its eye around the auto industry for an untapped or lightly populated niche. Subaru has pretty much owned the tall all-wheel-drive wagon market for decades, selling their quirky and capable all-weather wagons to a stereotypically artsy and outdoorsy clientele. Seeing an opportunity, VW applied a heaping of Subaru Spice to its handsome Golf SportWagen, adding all-wheel drive and increasing ground clearance by 0.6 inches. Did VW hit the mark? We decided to visit an artsy and outdoorsy Subaru owner to find out. 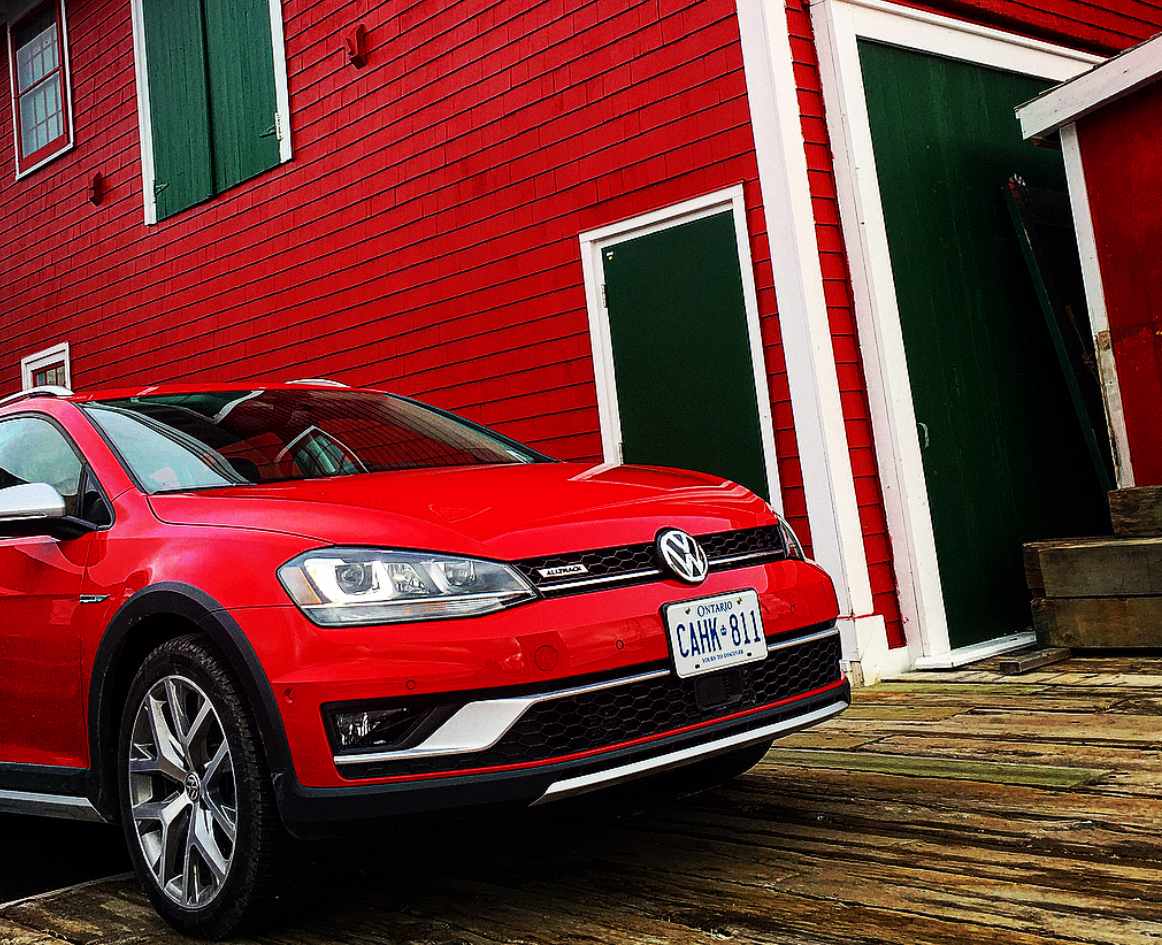 Jane Whitten is a Canberra-based artist who creates basket art by weaving or knitting just about any material imaginable, from seaweed to upcycled computer cable. Endearing herself to my love of all things cars, she even knitted a basket out of the copper wire harvested from the armature windings of an electric motor. Currently living and creating art in Lunenburg, Nova Scotia, Jane bought a Subaru Crosstrek upon her arrival in Canada, reasoning that its taller-than-average ride height would carry her on outdoor adventures while providing enough space for her basketry art and sufficient all-wheel drive traction to deal with the notoriously foul Atlantic Canadian winters. The Alltrack is built to target the same demographic.

VW has done a good job of adding visual heft to its SportWagen when creating the Alltrack, making it seem taller than it actually is. Black fender flares stand in stark contrast to silver trim lining the bottom of the doors, adding the illusion of height when paired with the excellent Tornado Red. Dual exhaust tips poking out underneath the rear bumper achieve the same visual chicanery at the rear. This is a good looking car.

Inside, the sensible and sober instrument panel and centre stack found in other Golfs is deployed here as well. Clear, crisp gauges instantly inform drivers of activity down in the engine room. A real, honest-to-goodness handbrake lives between the front seats, yet space remains for twin cupholders and a 12v outlet. A covered, deep cubby resides fore of the shifter, in which one will find an audio jack and a USB outlet. Connecting an iPhone 6+ to the infotainment system was a breeze with Apple CarPlay, and the Fender-branded audio system pumped out bass-laden tunes with aplomb. 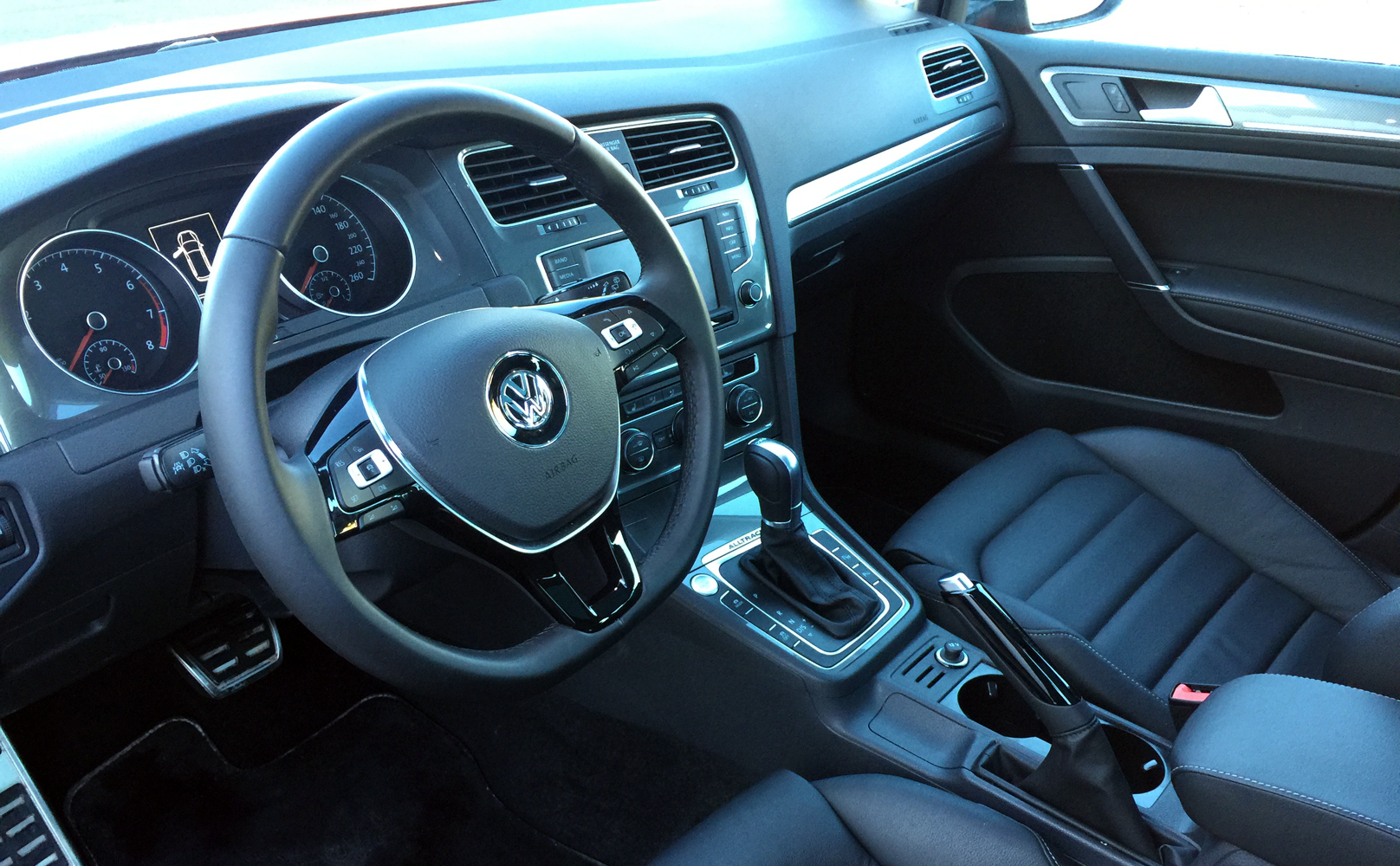 The infotainment system can be configured to dispense fuel economy tips, grading your driving in terms of efficiency in the manner of a stern high school English teacher. The system will even tell drivers how much extra fuel they are consuming in the running of electrical accessories such as the heated seats and fog lights. This feature greatly appealed to our artist friend, a proud granola type with one eye squarely on Johnny Polar Bear. Fuel economy itself was good, given the cold weather conditions and winter tires. We averaged 8.7L/100km over 530km, with economy dipping into the 7.8L/100km range during one long highway slog on regular fuel.

A typically German seating position forces drivers and passengers alike to sit upright and eat their vegetables. The seats are aggressively bolstered, so make sure to take the Alltrack on a lengthy test drive to ensure long-term comfort before signing on the bottom line. These large bolsters are the first clue that the Alltrack is a machine bent on providing a dollop of fun with its all-weather grip.

A large hump intrudes rudely on the rear floorpan, making space for the all-wheel drive running gear and forcing rear-seat passengers who find themselves relegated to the centre position to straddle the hump like the hero in a Western movie. Accommodations for outboard passengers are much more agreeable.

After a stop to visit the folks at Frank’s Corner Automotive, where one can buy fresh lobster and get their car serviced, we picked up tasty local items at the Lunenburg Farmer’s Market. A full 30.4 cu ft of cargo space behind the rear seats swallowed our locally grown kale and homemade baguette without difficulty. This measure easily eclipses the Crosstrek’s 22.3 cu ft, a byproduct of the Alltrack being a full five inches longer than the littlest Subaru. Folding the rear seats revealed a yawning 66.4 cu ft of carrying capacity. Our artist friend had no trouble shuttling her basketry art to the Peer Gallery in Lunenburg, remarking that the Alltrack’s cargo area was noticeably more cavernous than that of her Crosstrek. 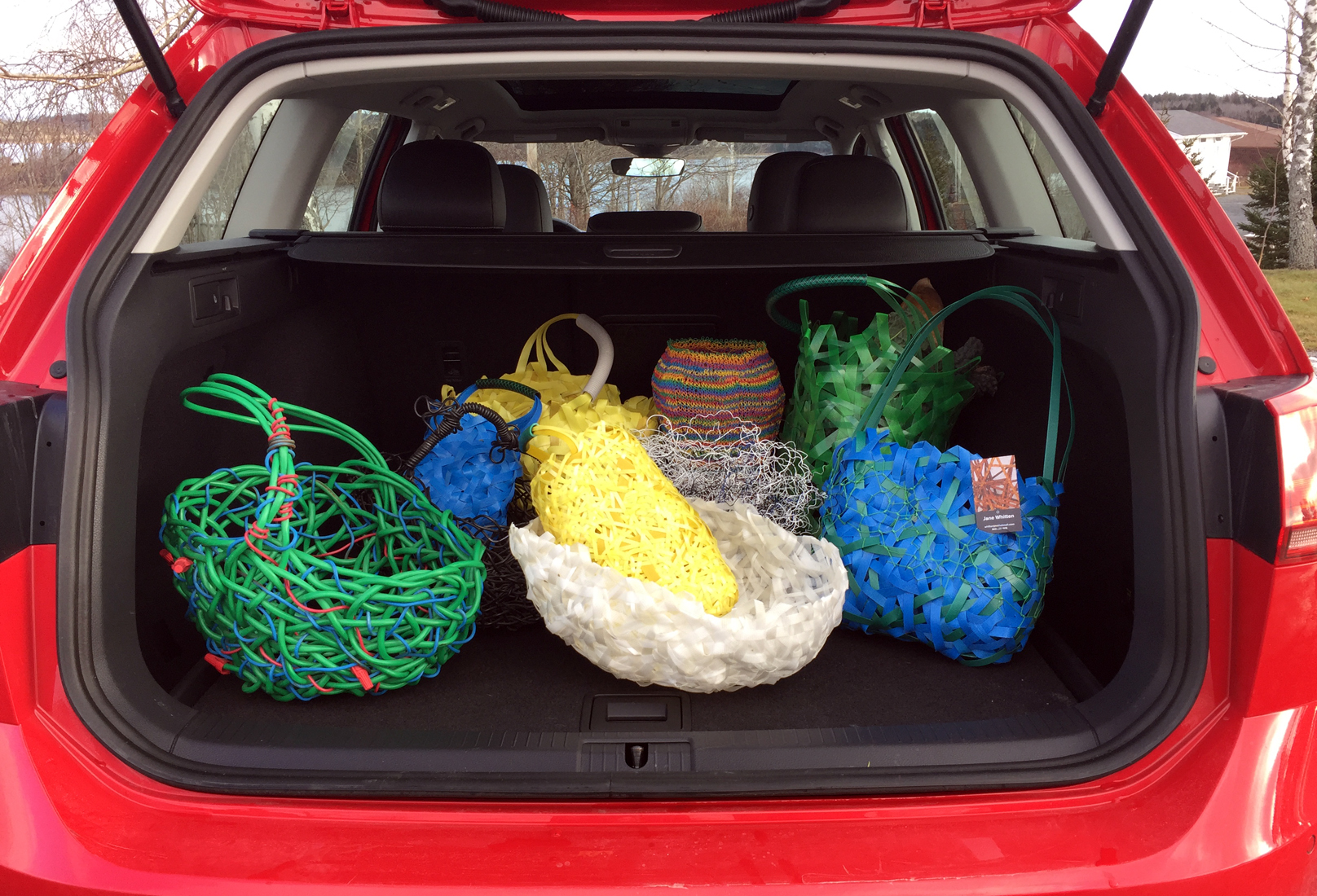 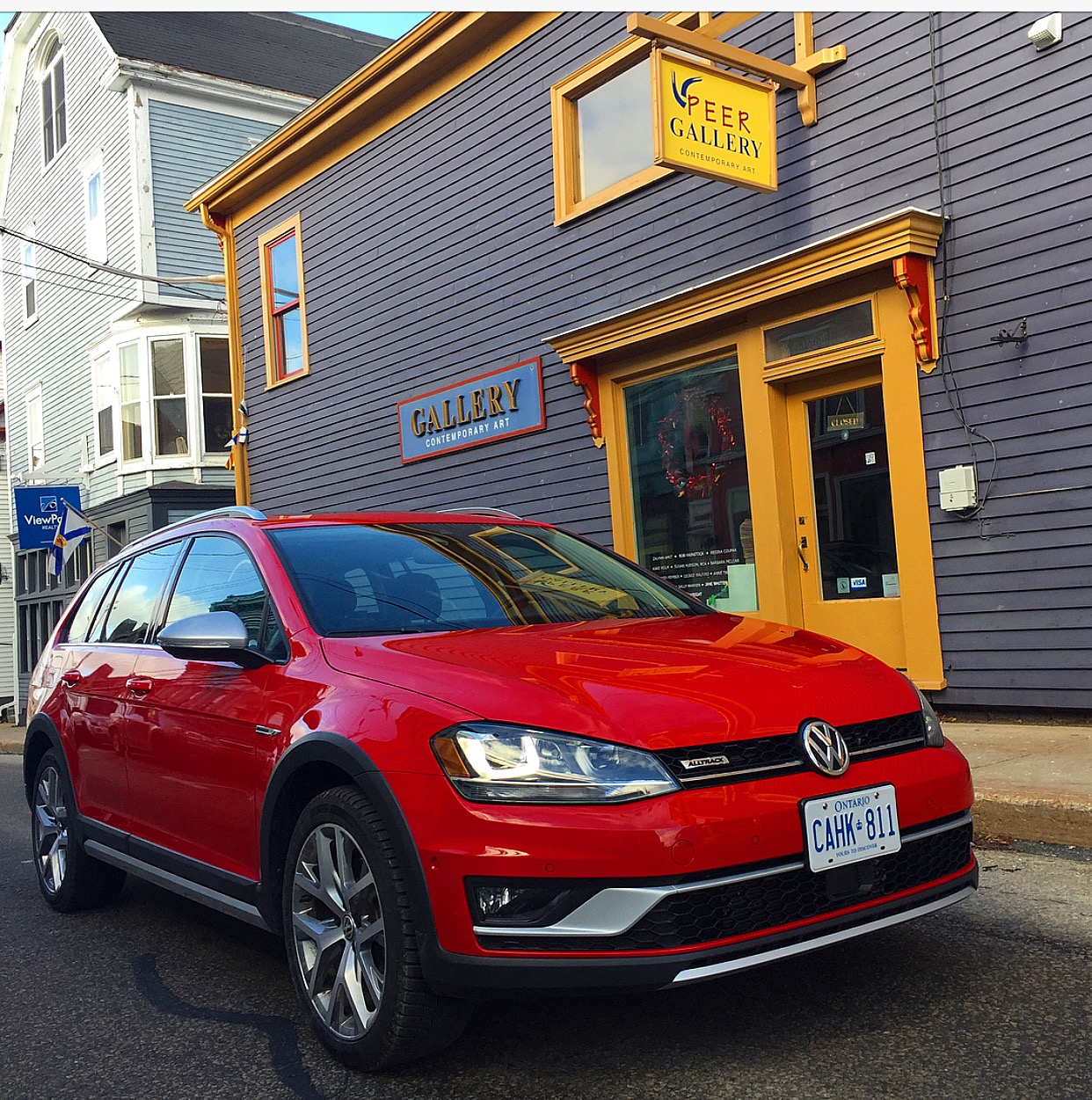 The Alltrack’s roof is about four inches closer to terra firma than that of the Crosstrek, with about half that deficiency in ground clearance (8.7” vs 6.9”). Shoppers will want to weigh carefully what’s more important to them: room for storing stuff inside or room for driving over stuff outside. Both have their merits. Remote start is an egregious deletion, especially in a car marketed with all-weather pretensions. However, the Alltrack makes amends with its nuclear-strength heated seats and side mirrors which disperse ice with the speed of a solar flare.

A turbocharged 1.8-litre inline-four cranks out an eager 170hp, but drivers are most likely to notice the torque: 199 lb-ft of twist available at a barely-off-idle 1600rpm. For now, every Alltrack is equipped with a six-speed dual-clutch automatic, a transmission which is a bit too eager in grabbing first gear during low speed maneuvers. A manual transmission is reported to become available later in the year.

Befitting a member of the Golf family, the Alltrack handles extremely well, exhibiting little body roll and feeling exceptionally well planted when the pavement gets twisty. Its Haldex all-wheel drive system had no trouble scampering over the terrain in a light off-roading situation and should acquit itself well in deep snow. 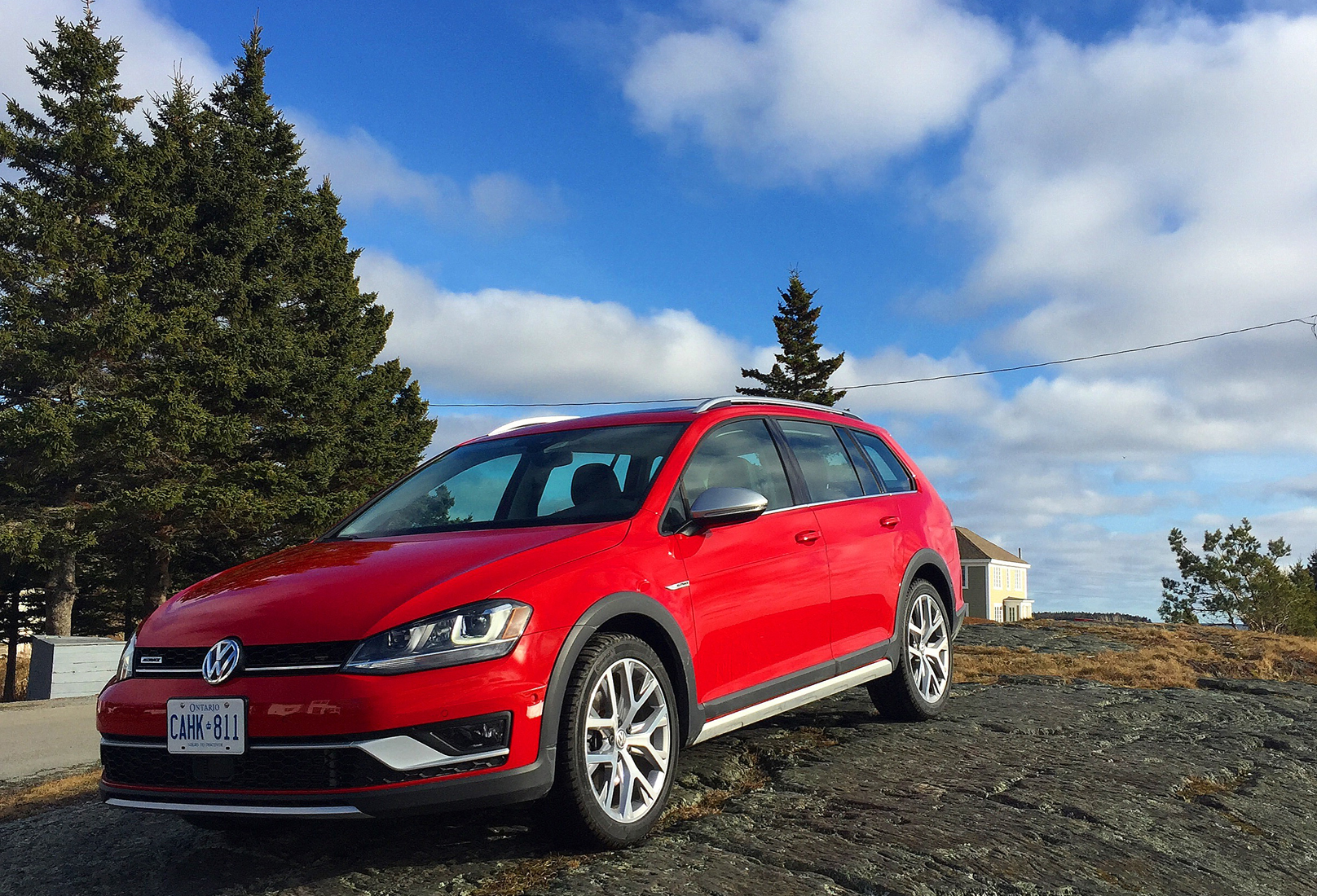 Excellence comes at a cost, and it should be noted that the Alltrack’s as-tested price of $39,940 reliably caused apoplexy. When informed of its cost, our Subaru owner raised her left eyebrow and made a braying sound like a sunburned donkey. This test vehicle was laden with two option packages: a $1610 Light & Sound package (bi-xenon headlights & the fabulous Fender-branded audio system) and a $1310 Driver Assistance package (adaptive cruise control and other driving nannies). A similarly equipped Subaru Crosstrek in Limited trim with the optional Technology Package is a not-insignificant $5500 cheaper, at $34,387. The much larger Outback Limited, also with the optional Technology Package, rings the bell at a more comparable $39,687.

Nevertheless, the 2017 Volkswagen Golf Alltrack will satisfy those seeking a good-handling all-weather alternative to stand out in a sea of me-too crossovers. Solidly built with a crisp interior, drivers who value sportiness and good handling—but need all-wheel drive and a commodious cargo area—will find a lot to like here.

You may also like: Ten things to look for on the 2017 Volkswagen Golf Alltrack