It assembles Sonata, Santa Fe and Elantra, and also builds engines for these vehicles and for sister brand Kia, which has an assembly plant in West Point, Ga., about an hour and a half east of here.

Hyundai chose this location to debut the newest edition of the Sonata mid-size sedan.

Like all carmakers, Hyundai has seen sedan sales slide precipitously in recent years; unlike some carmakers, it sees this drop bottoming out, and possibly rebounding, in the next few years.

We can only hope.

First, it looks rather like a four-door coupe, with a nicely raked rear roofline.

Kevin Kang, senior creative manager at Hyundai’s design studio in California, pointed out that designers are always looking for that “one beautiful line.”

He calls the design direction for the new Sonata “sensuous sportiness,” and is especially proud of the fact the hood comes right to the top of the grille with no sheet metal filler piece in-between.

“This is unheard of in a car in this price class,” he says proudly, “and we think it looks great!”

Designers also always want a low front end, and the issue there is the towers which house the front suspension struts.

Kang says Sonata’s engineers worked hard to lower those enough so the design people could achieve that goal.

To make sure you notice it, they have come up with what Kang calls the “Dynamic Lasso.” Chrome strips surrounding the side-window treatment extend forward onto the tops of the front fenders and continue to wrap around the headlights.

Within these strips, about a third of the way back, tiny LEDs create the Daytime Running Lights during, well, the daytime, and an intriguing and unique look at night.

The new Sonata is longer and wider to accommodate ever-growing customers. It is also lower, which might be counterproductive to that end. Hyundai has created thinner rear seats that regain most of that lost headroom, and three adults will fit back there as long as they are all friends.

Up front, it’s all tech, tech, tech, with screens everywhere and all the modern communications capabilities. You will need way more than the couple hundred kilometres we had to figure it all out, but it’s executed with handsome design and high-quality trim materials.

The design direction for the dashboard was “a drone,” says Kang. It has to communicate a lot of information, but they wanted it to be as simple as possible.

The arm rests run the full length of the front doors to make it easier for people of all sizes to reach them to pull these doors shut. This is hard to do, because the door structure has to accommodate window winders, door locks, airbags, etc. 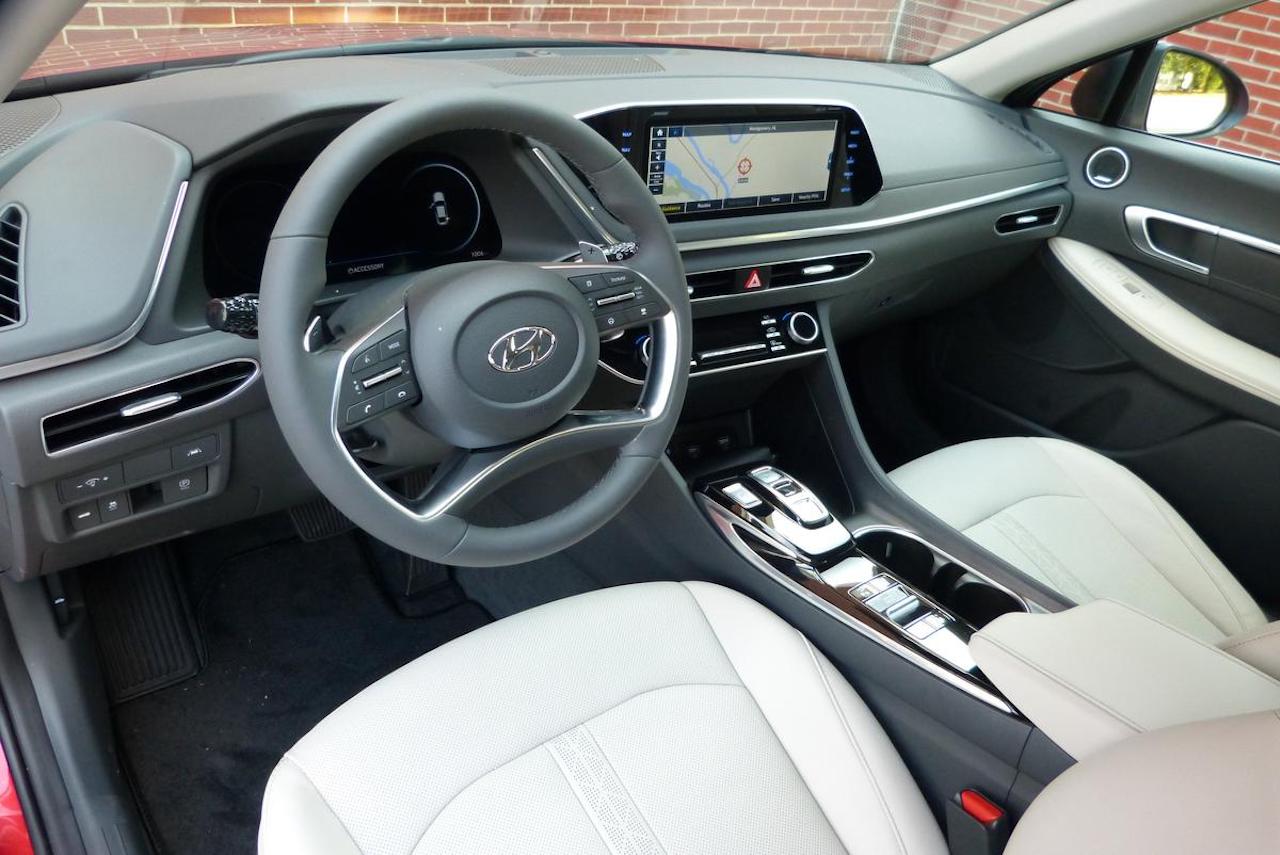 It isn’t just pretty sheet metal either. The underlying structure is an all-new platform, designed to provide more strength with less weight.

Among the more intriguing and important features is how the car reacts in the classic one-third overlap frontal collision, which describes how most “head-on” crashes actually occur.

Hyundai has figured how to have the car body collapse in a programmed way so the car tends to stay straight, rather than rotate after impact. This reduces the twisting forces on the occupants’ bodies, to reduce the chances of spinal and neck injuries.

Two engines will be available at launch later this year.

An all-new 2.5-litre naturally aspirated four-cylinder with both port and direct injection, depending on demand from the accelerator, will produce 191 horsepower at 6,100 r.p.m. and 181 lb.-ft. of torque at 4,000 r.p.m.

These numbers are up slightly from the previous 2.4-litre engine, but fuel consumption is some 13 per cent better, at least partially due to the high 13.0:1 compression ratio.

These numbers are almost exactly the same as the outgoing engine, but again, the objective is improved fuel consumption.

The only transmission is Hyundai’s own eight-speed automatic, introduced on the Palisade SUV. Uplevel trims get shift paddles.

No four-wheel drive is offered; Hyundai says this box is checked off by only eight per cent of customers in this segment on cars that do offer it, although that number is probably higher in Canada.

All the safety systems — forward collision warning, lane-keeping assist, smart cruise control with stop/start capability and automatic adjusting to changes in the speed limit — are available, and many are standard on even the lower trim levels.

You will be discovering stuff in this car months after you buy it.

Sonata offers a host of capabilities using your Android smart phone, including self-parking.

At the moment, these features aren’t available with an iPhone because Apple has not granted Hyundai access to their systems. They’re working on it and should have this capability either by launch, or shortly afterwards.

The vehicles made available for our drive were all the range-topping Premium trim, with the 1.6-litre turbo engine.

The first task is always to figure out how to shut off the Head-Up Display that detracts from actually looking at the road, which is what you’re supposed to be doing.

That done, assuming you actually know how to drive, you would then shut off the other nanny systems, especially the always irrelevant “blind spot” warning system. It’s a sad commentary on our driver-training industry that they haven’t taught people there is no such thing as a blind spot.

At one point we accidentally triggered the voice-activated assistance function, and couldn’t shut the bleedin’ thing off.

We tried saying “Cancel.” It replied, “I’m sorry, I did not understand.”

“I’m sorry, I did not understand.”

It replied, “The route guidance will start now.”

We had to shut the car off and start over.

The engine moves the car along well, and it’s reasonably quiet until you hit the upper reaches of the rev range, which, thanks to the good low-end torque, you really don’t have to.

The transmission shifts smoothly, and in the upper trim levels like Premier you have the option of using the paddle shifters.

The roads around Montgomery are well-paved, so we can’t tell you much about how the car might react on Toronto’s battle-scarred roads.

They’re also heavily patrolled, so we can’t tell you much about high-speed handling prowess either.

But it feels nicely balanced. It’s not a sports sedan, but should do pretty much what anyone attracted to the car will want it to do.

That low hood provides good forward visibility, and I found the seats comfortable.

They’re also both heated and cooled on this trim level, the latter feature being especially appreciated during the hot spell Montgomery was experiencing during our visit.

There are a lot of excellent cars in this segment. Hyundai knows it has to offer something special to make inroads against the big players.

With dramatic styling, lots of high-techery and competitive powertrains, the 2020 Sonata will be making your mid-size sedan purchase decision a whole lot more difficult.