The Lincoln MKX is the aspirational derivative of the Ford Edge, both of which rolled off the Ford of Canada’s Oakville assembly line, beginning with the 2007 model year.

In a sign of these digital times, Bluetooth connectivity and voice recognition hiccups are the most common problems reported by the owners of three-year-old vehicles, a key finding of J.D. Power’s dependability study this year.

“Consumers today do not necessarily define dependability as things not breaking, but rather, as performing the way customers expect them to,” David Sargent, J.D. Power’s vice-president of global automotive, said of how quality is perceived.

By frustrating owners with its finicky MyFord Touch and MyLincoln Touch infotainment systems, the scourge is partly to blame for Ford languishing below the industry average in the 2015 study.

“Indexing music is like having a root canal,” one Lincoln owner posted online, hoping to join an angry mob.

The Lincoln MKX is the aspirational derivative of the Ford Edge, both of which rolled off the Ford of Canada’s Oakville assembly line, beginning with the 2007 model year. Configured as a five-door, five-passenger crossover, the MKX was groomed to compete in the burgeoning mid-size luxury ute segment.

The Lincoln MKX received an ambitious mid-cycle freshening in 2011 to further distance it from its middle-class brethren. The bold, winged grille treatment and split LED taillamps were distinctive enough, but it was the new cabin design that really upped the MKX’s game.

The centre stack housed the standard MyLincoln Touch system, which employed a touchscreen, “capacitive” sliders instead of knobs, and responded to 10,000-plus voice commands. Sometimes.

Available in front-drive and all-wheel-drive configurations, the sole power plant for 2011 was Ford’s new 3.7-L DOHC V6 (replacing the previous 3.5-L V6) with variable camshaft phasing and true dual exhaust, good for 305 horsepower and 280 pound-feet of torque. It mated to a six-speed automatic transmission, a joint product of Ford and General Motors. Properly equipped, it could tow 3,500 pounds (1587 kilograms) with ease.

Four-wheel disc antilock brakes and an antiskid system with rollover sensors were standard, along with front-side and curtain-side airbags. A panoramic glass roof and steering-linked adaptable headlamps were two of the interesting options.

The MKX did not receive any significant updates in subsequent model years, beyond an improved version of MyLincoln Touch that attempted to address usability concerns starting in 2013.

DRIVING AND OWNING THE MKX

Despite the MKX’s considerable mass — at some two metric tonnes — the new engine thrust it squarely in the hunt with competitors such as the Lexus RX 350. The front-drive model could accelerate from zero to 97 km/h in 6.4 seconds, and under seven seconds with the heavier AWD hardware. 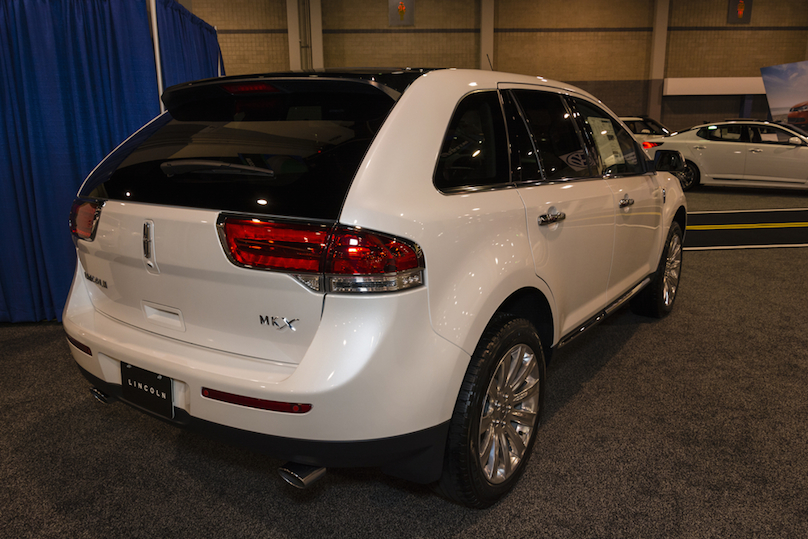 While the shocks and springs preserved comfort as a priority, the cornering attitude was reasonably flat and ride quality was noticeably firm — especially with the optional 20-inch dubs. The nicely weighted steering was communicative and the braking performance had distinctly improved over earlier MKXs.

Lincoln’s mid-size crossover was best suited to long-distance marathons, where it could eat up the miles in comfort and supreme quiet. Owners did question Lincoln’s assertion that its CUV was fuel-efficient, though.

“With conservative driving, I only average between 19 and 22 miles per gallon (12.7 L/100 km),” one owner posted. Another called Ford’s economy ratings a “gross misrepresentation.” At least the MKX uses regular-grade gas.

Drivers raved about the Lincoln’s comfy wide-body cabin — adults can sit three abreast on the rear split-bench — the lofty view of the road, gratifying sense of safety, and the thoughtful luxury touches. On the reliability front, the MKX is not overly troublesome — if owners are willing to overlook the driver interface.

“I’ve had three software updates, the CPU replaced, rear sensors all reprogrammed at the dealer. And it’s still terrible,” posted one owner.

Some owners documented brown fluid seeping from the power transfer unit (PTU) on AWD models. Leaks are commonly from the axle seal or PTU cover seal.

Tell us about your ownership experience with these models: Mitsubishi Lancer and Chevrolet Avalanche. Email: toljagic@ca.inter.net .