A prescription for decadence

There was a time when Japanese manufacturers were accused of copying everything that passed through their hands.

Duplication, and not innovation, was the Japanese way, critics charged. So how to explain vehicles such as the Nissan Skyline and Toyota Celica All-Trac?

The truth is, once Japan had the resources to research and develop, it started to create things. Such as Hello Kitty. And the world?s first crossover ? the 1995 Toyota RAV4 ? that combined the best attributes of a car, wagon and sport-utility vehicle.

Toyota would coax lightning to strike twice in 1999 by introducing the world?s first luxury crossover: the Lexus RX 300.

By all accounts, the RX was the right prescription for changing automotive times. 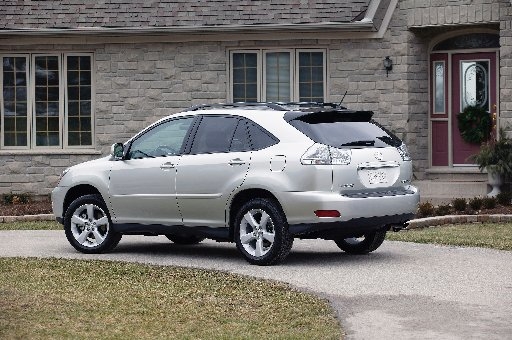 The front-drive RX 300 adopted a unibody platform largely carried over from the milquetoast Camry, while the four-wheel-drive model added oily bits from the RAV4 and All-Trac.

Knowing that SUV drivers desire a tall driving position, comfort, safety, utility and, especially, style, Lexus made sure the RX delivered on all counts by employing familiar car technology. The RX 300 became Lexus? bestselling model from day one.

The five-door wagon was redesigned to become the second-generation RX 330 for 2004, gaining more power, size and features, along with swoopier lines. Overall length grew 15 cm on a 10-cm longer wheelbase.

An optional air suspension system offered four ride-height settings, including a programmable ?kneeling? feature that lowered the vehicle to ease access and loading.

Inside, occupants were treated to more room up front, along with a sliding 40/20/40-split back seat for more carrying options, and sumptuous appointments all around. Owners noted that the centre armrest is small, and the seating earned raspberries for being short of support.

For 2005, a power-assisted rear liftgate became standard, while the front-passenger seat received eight-way adjustments. The RX 400h gasoline-electric hybrid was an early-2006 model, delivering 268 hp with a V6 augmented by three electric motors driving all four wheels via a continuously variable transmission.

The RX received a new 3.5 L V6 for 2007, good for 270 hp, attributable to the added displacement and variable valve timing on the intake and exhaust cams. The RX 350 came packed with more sound insulation, while AWD models got a viscous limited slip differential. The 2008 models earned a few styling tweaks.

Thanks to its Camry-derived bones, the RX 330 was reasonably light on its feet, taking 7.8 seconds to attain 96 km/h. The more muscular RX 350 could do it in just 6.8 seconds.

The RX was a nimble crossover ? its formerly vast turning radius trimmed considerably ? yet it drew criticism for its numb steering and overly protective stability control.

Other gripes focused on the RX?s un-Lexus-like cacophony at speed. Many blamed the factory tires ? changing brands often quelled the rumble ? while others cited wind noise.

The RX was hardly fuelish. Owners reported burning about 12 L/100 km in town and 9 on the highway, using premium grade.

Oozing refinement, the Lexus RX carved out a big slice of the luxury crossover market thanks to its innocuous road manners, plush comfort and sterling reliability.

Significantly, RX production shifted from Japan to Toyota?s Cambridge, Ont. facilities in 2003 ? making it the only Lexus assembly site in the world outside of the homeland.

Still, there were a few mechanical setbacks, the most common malady being the automatic transmission?s less-than-elegant shifts, which some owners characterized as rough, jerky and hesitant. Dealers blamed the computer?s ?learning? function, addressed with a software upgrade that sometimes, but not always, mitigated the shift lag.