E-series gets an A for variety

It was the year former Teamsters union boss Jimmy Hoffa disappeared, Microsoft was founded, and Ford unveiled an all-new Econoline ‘ a blank canvas that helped inspire the 1970s custom-van craze.

The 1975 Econoline became the prototype of every body-on-frame van that followed it. With the motor pushed out ahead of the passenger compartment (the inaugural 1961 model was a mid-engine design), the third-generation Econoline evolved into a two-box design rather than, well, just a box.

The rear-drive van was next refreshed for 1992, with new interior appointments and an exterior redo that looked identical to the outgoing model. Apparently, $1.5 billion doesn?t buy much overtime in Ford’s design department. 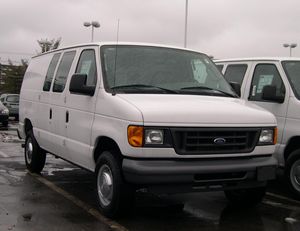 In the van world, change is marked in glacial movements.

In 1997, renamed ?E-series? trucks were available in two lengths, three load capacities and a windowed passenger version known as the Wagon, a hotel-shuttle favourite.

The van?s pickup-based motors were replaced with Ford?s new family of modular engines. Gone was the indestructible 4.9 L inline six-cylinder, replaced by a base V6, while two Triton V8s and a Triton V10 displaced the old 302 and Windsor 351 V8s. The diesel V8 carried over unchanged.

In 2009 the E-series received a new dashboard complete with Ford?s Sync communications system and available in-dash navigation. The 6.0 L turbodiesel was discontinued after the 2010 model year.

After decades of toiling in obscurity, the Econoline is departing for the big vanpool in the sky as Ford prepares to build its full-size Transit van in Kansas City.

We couldn?t find any published performance numbers, but suffice it to say there are enough engine choices for shoppers to find the required amount of thrust.

The Econoline is first and foremost a cargo hauler, so suspension settings are tuned for heavy loads, which means the van is somewhat stiff and bouncy when unladen. Despite the upgraded steering gear, some owners still report an unsettling drive.

?The vehicle has enormous play in the steering column at higher speeds with significant drifting, which is dangerous when passing tractor-trailers,? one owner posted online.

Drivers reported fuel usage ranging from a high of 14 litres/100 km to a dismal low of 22 litres for the V10. Expect to pay a premium for the ?Power Stroke? diesel engine.

Ford has earned a loyal customer base by delivering a reliable, well-designed work and passenger van to market consistently over 50 years. Many owners heaped praise on their Econolines, while a few heaped scorn for a work truck that, when it?s laid up on a hoist, costs money both in terms of repair expenses and lost revenue.

?The #5 spark plug blew out while driving. Mechanic said it was a common problem with Ford E-250,? one owner griped online. While some 5.4 L Triton V8s are missing proper threads, the three-valve Tritons have plugs that can become seized in the cylinder head and break apart during removal.

Other maladies exhibited by the Ohio-built vans include short-lived air conditioning compressors, poor-shifting transmissions with non-functioning overdrives, drivetrain vibration and some electrical faults.

The last word goes to an Econoline fan who says minivan drivers just don?t get it: ?Everyone says it?s too big, then asks to borrow it later!?