After spending time on lofty window ledges last year, General Motors investors were coaxed inside by news its shares are now trading at $37, eclipsing the $33 initial public offering price in November 2010 (after Chapter 11 reorganization).

The share price had plunged below $20 as the U.S. economy slowed and Europe faltered, before rebounding nicely this year.

Investors may be happy, but how have motorists fared buying the new General Motors?

If you ask a Chevrolet Equinox driver, whose four-cylinder engine has ground itself to smithereens, the sentiment may be bearish.

‘Car has been in the shop 19 times. Had to have speakers replaced, timing chain, camshaft actuators, camshaft connectors and new computer,’ one owner posted online.

The second generation of Chevy?s popular five-door crossover hit the streets in June 2009, just as the old GM filed for bankruptcy. The Equinox got the extra-stiff TE platform, a combination of the old Theta and new Epsilon architecture first seen under the updated Saturn Vue, an Opel design.

It rode on the same-size wheelbase as the outgoing model, although the trucklet was about 3 cm shorter and 3 cm wider. Although the windshield was raked back for better aerodynamics, the body had that pumped-up-with-an-air-hose look that makes friends easily.

The biggest improvement was in the cabin, where the sweeping dash was rendered in a variety of silver, gray and chrome materials, set off with blue ambient lighting that made for a pretty classy environment.

Configured for five passengers only, there was enough room to permit the rear bench to slide 20 cm fore and aft to fine-tune the best-in-class legroom.

Both engines mated to a six-speed automatic transmission with manumatic shifting. Front-wheel-drive was standard, while all-wheel-drive was optional with both powerplants. The power steering system was electric, not hydraulic.

Along with good crash-test ratings, the Equinox came equipped with four-wheel antilock disc brakes (with brake assist), traction and stability control, a bevy of airbags and GM?s OnStar communications system. 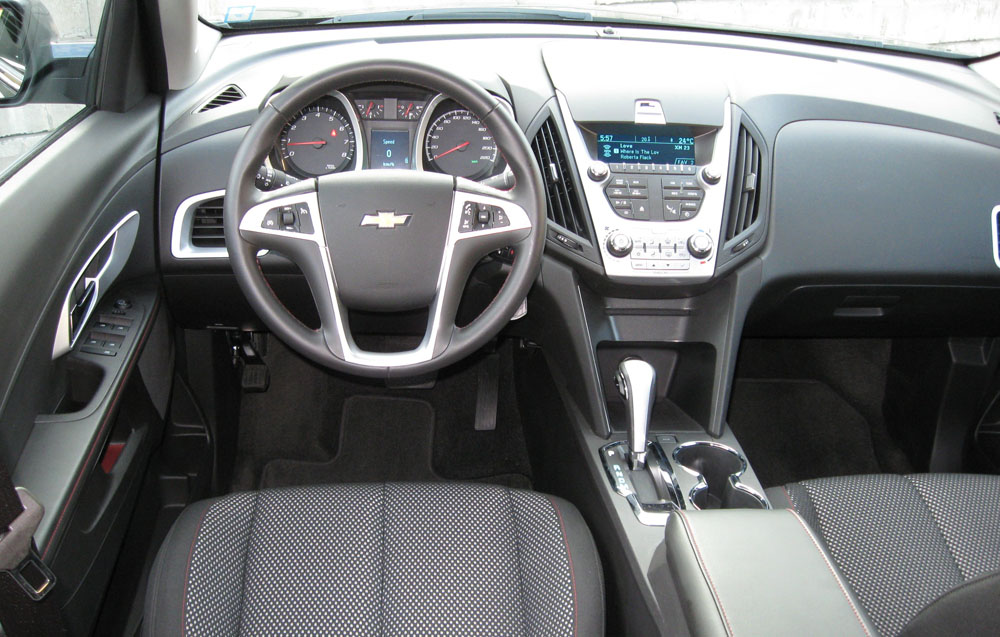 Saddled with unsightly weight gain, the Equinox is a hefty locomotive that cries out for more motor: zero to 96 km/h took 8.7 seconds with the four-cylinder and one second less with the 3.0-L six. The energetic 3.6-L did the deed in a relatively speedy 6.8 seconds.

All that metal does make for a supremely quiet conveyance, which consumers often equate with quality. It feels big and safe, but the driving dynamics are merely competent, rather than anything approaching responsiveness.

At its launch, GM honcho Bob Lutz had promised a fuel-efficient SUV, but the Equinox barely delivered on that score. Owners clogged the Internet with complaints about the four-cylinder?s high fuel use, typically no better than 10 L/100 km on the highway.

More significant, however, is the Equinox?s propensity to break down.

A number of owners reported losing all power on the highway or bogging down to a crawl. They describe the four-cylinder ?chugging? or jerking badly. Numerous engines were destroyed after the timing chains stretched and skipped, or broke altogether.

?At a little over 1,600 km, it decided to randomly stall while driving. The camshaft actuators have been replaced three times,? reads one unhappy post.

Plenty of others noted voracious oil consumption by the four-cylinder, some finding little oil on their dipsticks. The high-pressure fuel pumps are reputed to fail. Transmission failures have also been reported, but in smaller numbers. The V6 engine is the better choice, although oil leaks are not unknown.

We would like to know about your ownership experience with these models: Audi TT, Nissan Murano and Range Rover LR4. Email: toljagic@ca.inter.net.

What’s Best: Rolls-Royce quiet, safe as a bank vault, made in Ontario.