The brand-new 2.9-litre bi-turbo V6 is now nearly 60kg lighter than its predecessor and pushes out an impressive 450 hp and 442 lb./ft.

TOULOUSE, France: I was rather perplexed when I first heard that Audi were getting rid of the big V8 in in favour of a compact V6 in the RS 5

And then I found out that rumours about dumping the twin clutch and stick shift gearboxes were true as well.

After all this was one – if not the best – handling and sounding cars in its class.

It wasn’t until I actually got to see it and get behind the wheel did I realize that any misconceptions I had were quickly put aside – well more likely ripped out of my head and spat out through the exhaust with a contemptuous growl! 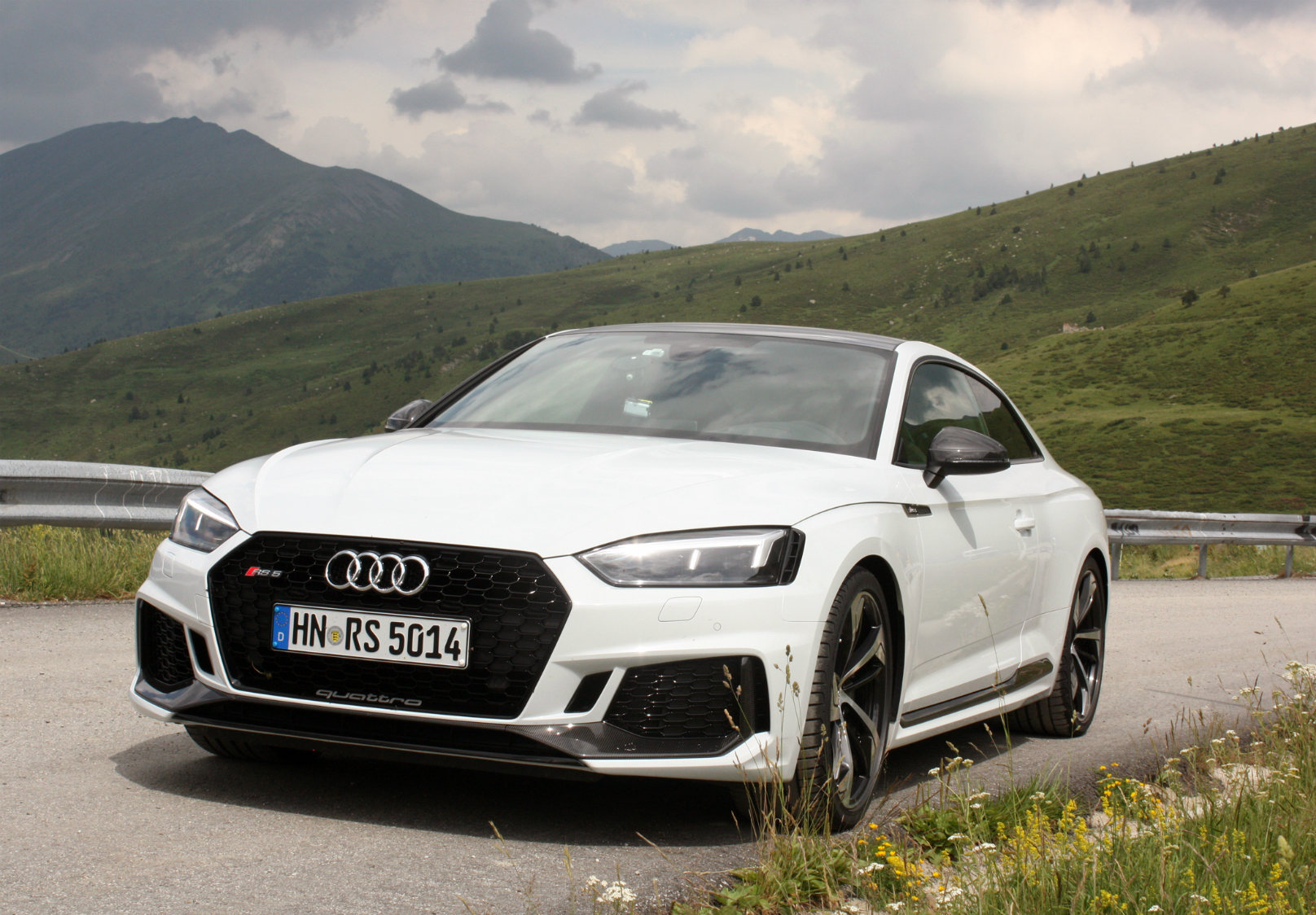 The all-new RS 5 is still attractive, especially from the front. The massive air inlets and honeycombed single frame radiator grille gives it a much wider and flatter stance than the less muscular base model A5.

The wheel arches have been widened by a further 15 mm to accommodate the huge tire and wheel packages, which truly accentuate the muscular and aggressive stance.

Under the hood is where most of the change has been made. Audi have done away with the 4.2-litre naturally aspirated V8 in favour of the brand-new 2.9-litre bi-turbo V6 and in doing so have managed to save almost 60 kg.

The engine may be smaller, but Audi engineers have managed to up the horsepower to 450 and dramatically raise the torque from the lacklustre 317 lb/ft to an impressive 442 lb/ft. 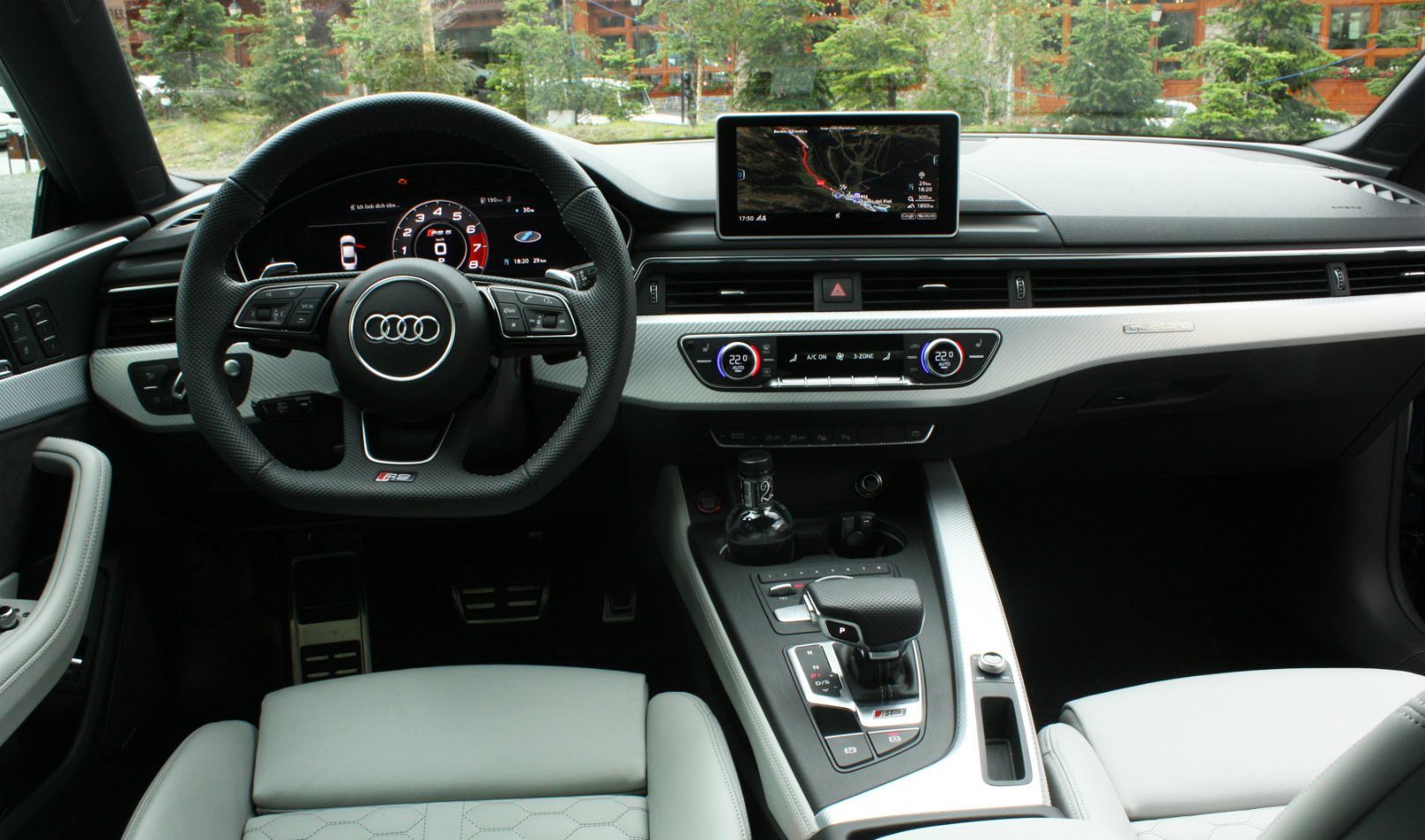 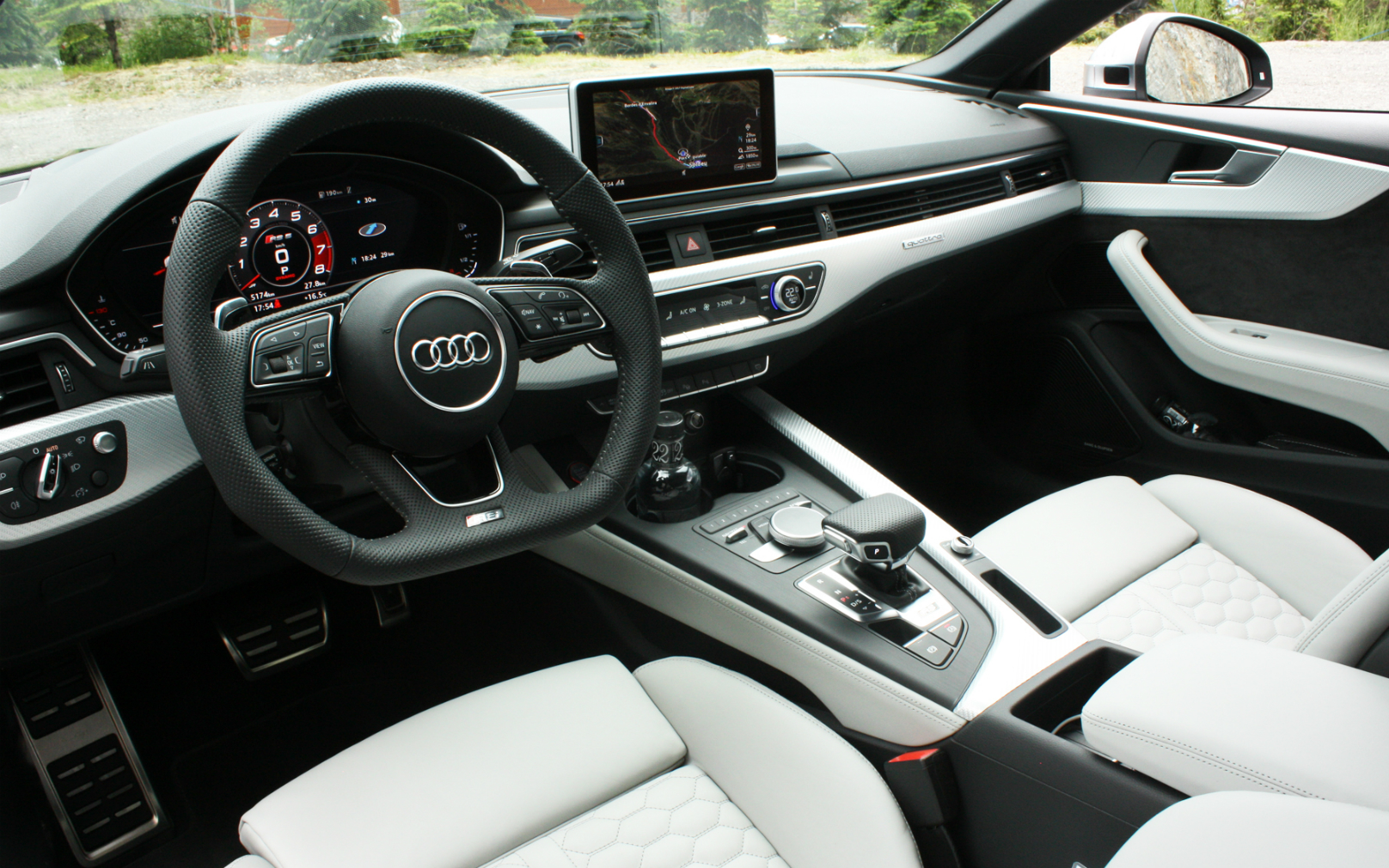 Just because the engine size has gone down doesn’t mean that it has lost any of its throaty, guttural growl, I found that the exhaust note matched if not exceeded the previous generations trademark sound.

The extra power generated now pushes the RS 5 to 100 km/h in just 3.9 seconds and on to a top speed of 250 km/h and can be pushed even further to 280 km/h with the optional dynamic package installed.

The power is transferred to the wheels by means of the new eight-speed tiptronic automatic transmission that is assisted by Audi’s Quattro AWD system.

Internally there is a little more shoulder room for driver and front seat passenger with the rear seat passengers benefitting from an increase of 23 mm in knee room.

The cabin is spacious and well laid out with all controls easily at hand.

Fit and finish is as you would expect from Audi, the testers I managed to get into all came with the optional RS bucket seats that were more than supporting and comfortable. The flat centered RS steering wheel adds to the performance feel of the cabin. 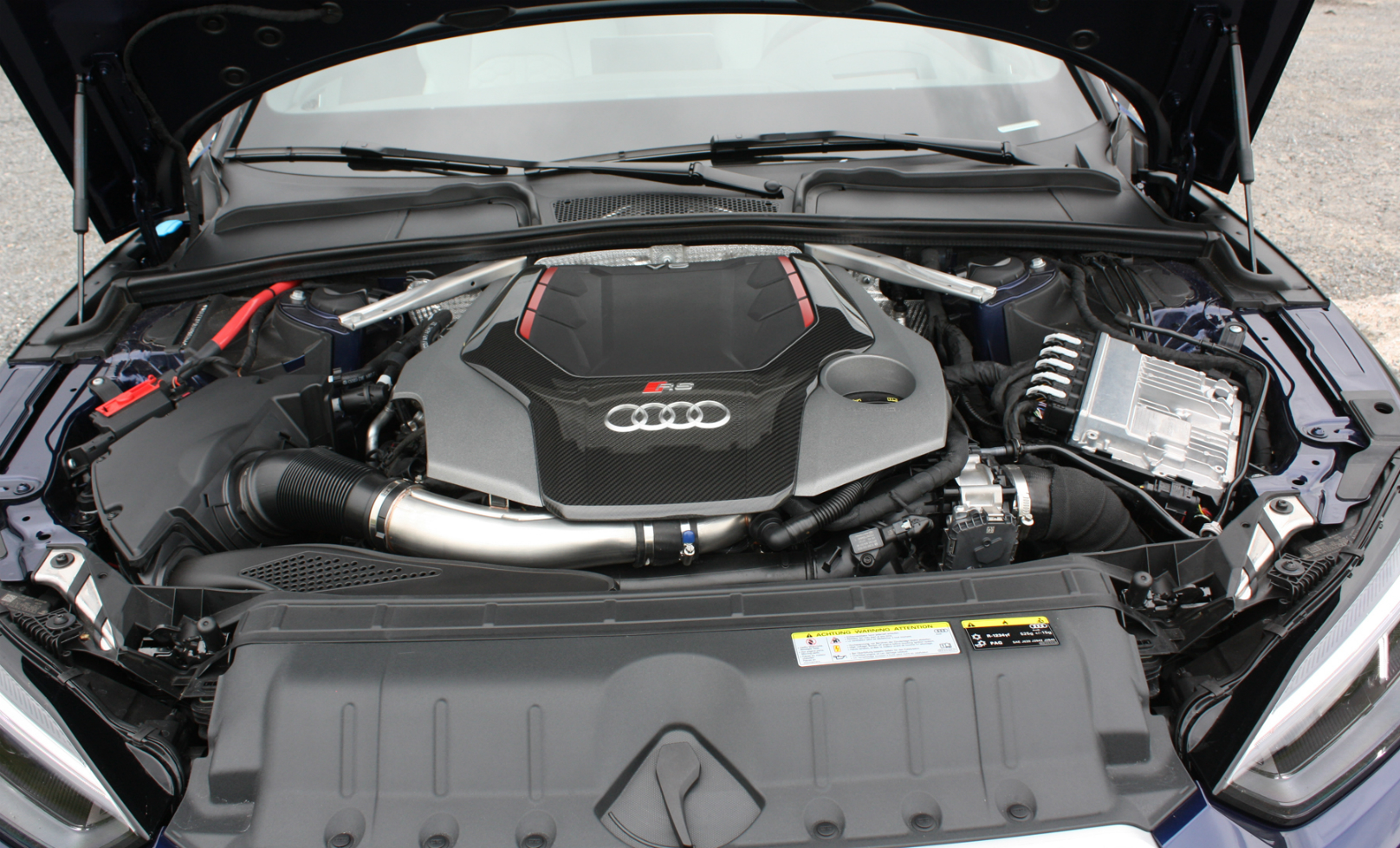 The RS 5 comes with three drive modes; Comfort, Dynamic and individual all easily changed from on dash buttons.

The initial drive from Toulouse to the principality of Andorra was mostly highway, in Comfort mode the RS 5 easily cruises along at 120 km/h revving around the 1,800rpm mark, the suspension manages to keep the potholes and bumps out of the cabin and it floats along making it the perfect Grand Tourer.

Where the RS 5 comes into its own is the power availability in the mid range. I was cruising along and needed to go around a slowing truck.

I spiked the gas a little more than I should and the car came to life – instantaneously. The transmission dropped from eighth gear down to third threw me back into the seat and seemed to gain 80 km/h from nowhere, it certainly made me aware of what it was capable of.

Entering the Pyrenees the roads became steeper, tighter with some great switchbacks – a perfect test for Dynamic mode. Once selected the car hunkers down the suspension stiffens and the steering tightens up. 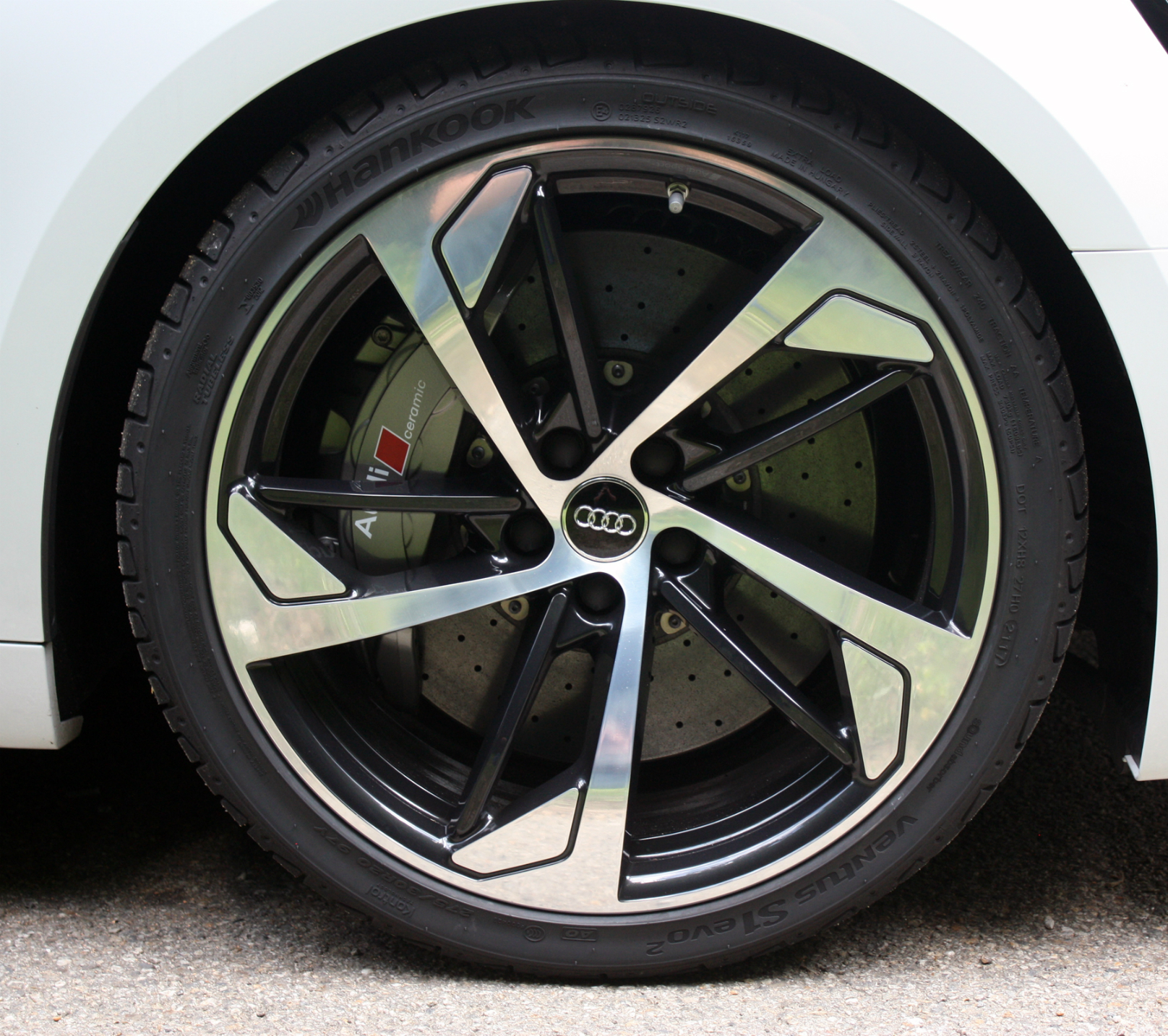 The new eight-speed transmission started to prove itself; the shifts were short and precise even without using the paddles.

It shifted as quickly as any twin clutch gearbox without any loss of sensation. Playing with the steering wheel mounted paddles made the drive even more exhilarating.  There was no feel of turbo lag at all, the steering very tight and ever so precise.

I was pushing the car hard into the corners but the huge optional low profile 275/30R20 (Standard tires are 265/35R19) refused to give up any traction. Body roll is non-existent and at one point I thought I was going to rip the road off the side of the mountain before the RS was going to loose traction. The handling on these mountain roads was truly phenomenal.

I really didn’t play around with the Individual mode, but when engaged the car can be set up precisely as you would like suspension, handling and even exhaust note can be fine tuned to make the driving experience exactly how you like it. 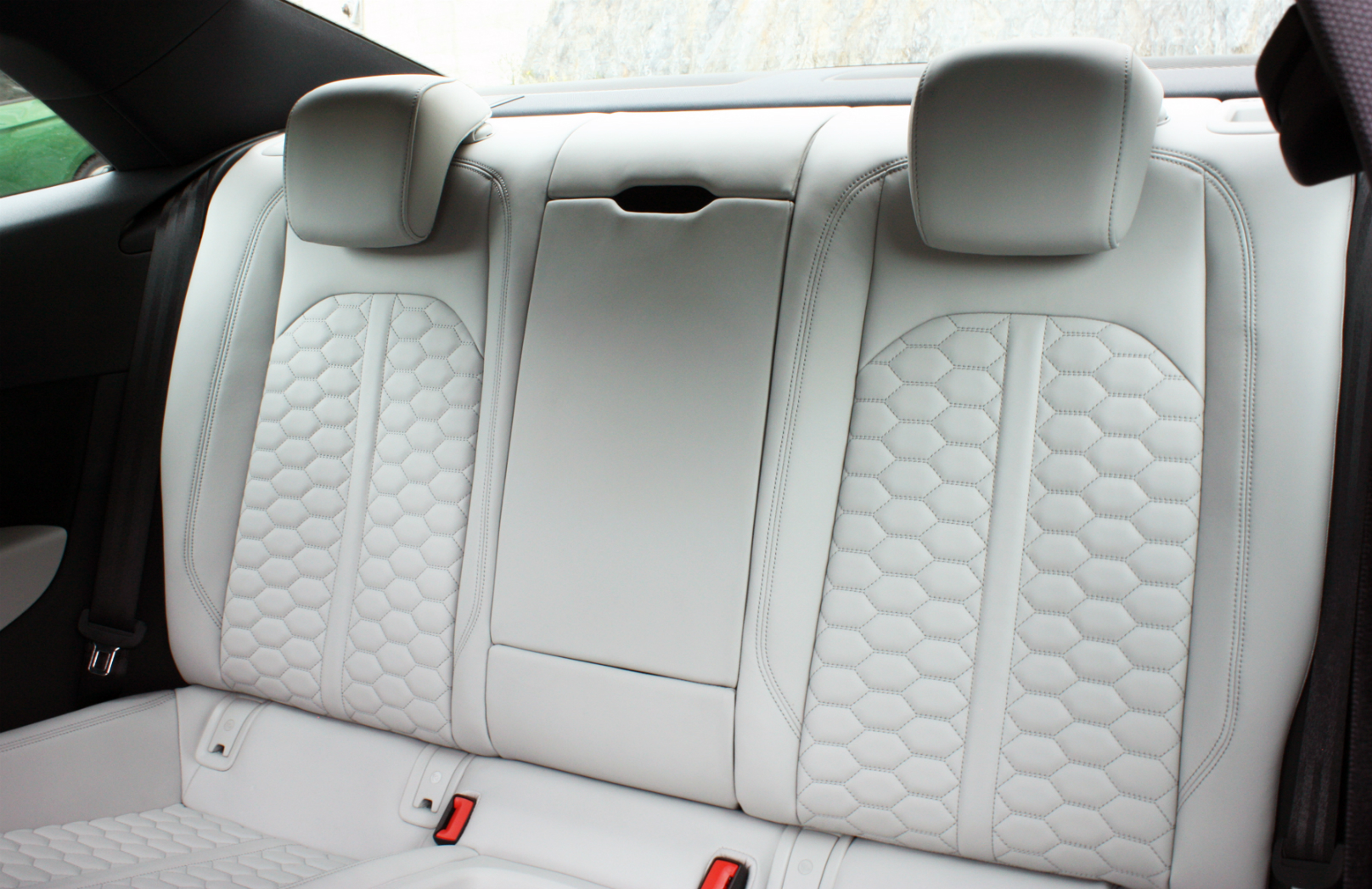 Overall the RS 5 has been taken to the next level, the looks handling and sound have all been lifted a couple of notches.

This car can make any journey a comfortable smooth ride, but when needed turns into an easily controlled monster that can turn a mundane trip into an exhilarating driving experience.

Unfortunately the new 2018 RS 5 won’t be available in Canada until early next year with pricing being announced just before. 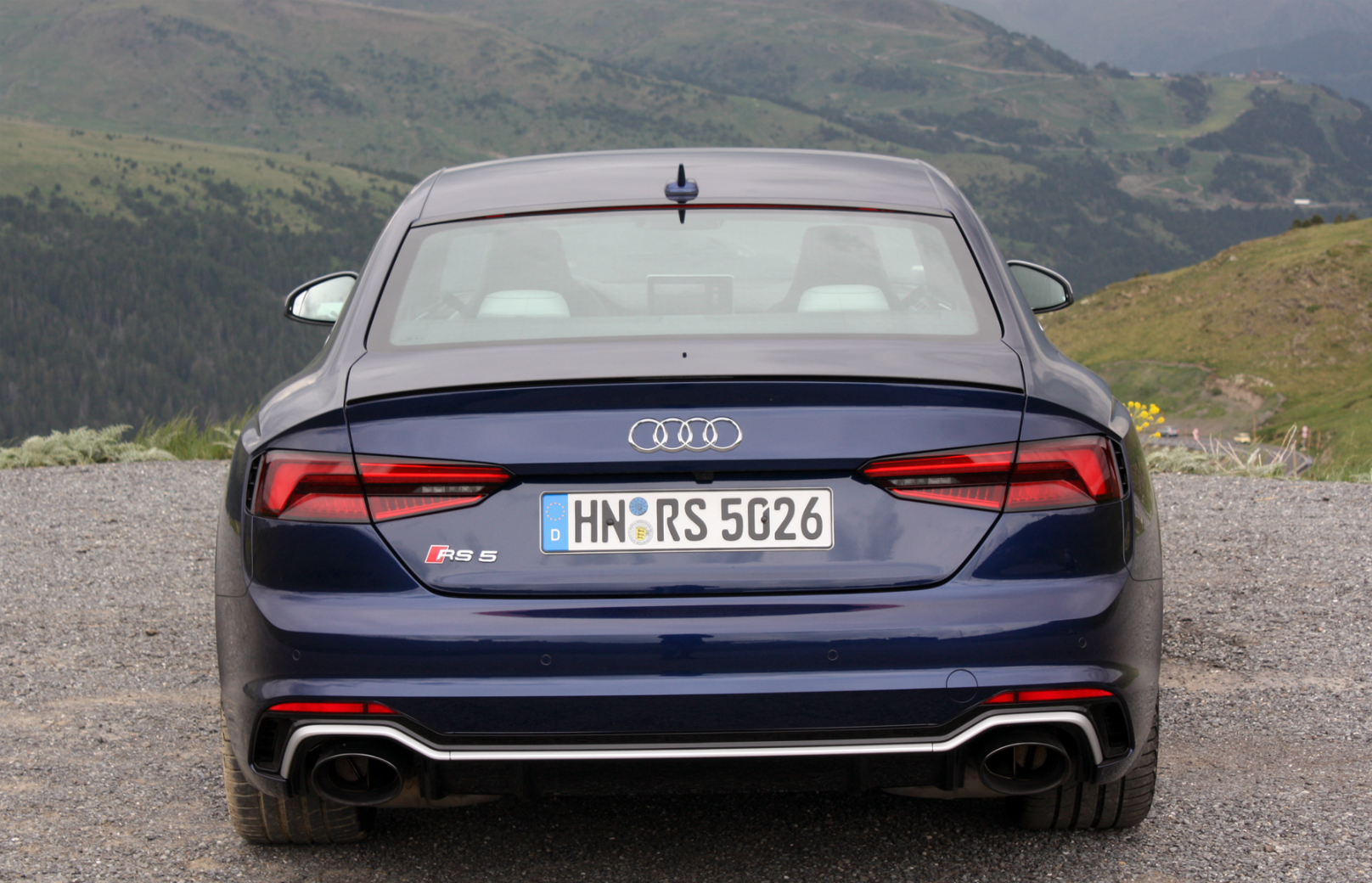