Three provinces in one day.

Ages ago, there was a series of Lotto 6/49 commercials promoting the fact that one’s dollar (or, a million of them in the lottery’s case) went a lot further in the Maritimes. They had a point. A person could easily buy a multi-bedroom McMansion for the price one would pay to acquire a two-bedroom fixer-upper in Toronto or Vancouver. The same holds true today.

Something else that gets you a bit further in the Maritimes? The number of kilometers a person travels. No, we haven’t figured out how to bend space-time (yet) but, thanks to a quirk in geography, a driver can easily visit three different provinces in a single day. For this story, we called it the Maritime Hat Trick.

Setting off from Truro, Nova Scotia, the seasonal ferry to Prince Edward Island is a short 68km distant, about a 45 minute drive if traffic is light. Being the Maritimes, it always is. Nova Scotia does well with its portion of the Trans-Canada Highway, a neatly-maintained section of divided four-lane. Like most other places in our nation, though, the potholed side roads are best left unmentioned.

Our steed for the day is a 2018 Mazda6, decked to the nines in top-spec Signature trim. The third-gen of this sporty-looking sedan first showed up at the L.A. Auto Show in 2013, going on sale in the 2014 model year. It received styling tweaks for 2018 including the CX-5’s larger grille and natty LEDs in the head and taillights.

The big news, however, is the arrival of forced induction between those flared front fenders that remind this author of the late and lamented rotary-engined RX-8 sports car. Also found in Mazda’s biggest crossover, the CX-9, this 2.5L turbocharged inline-four makes 250 horsepower on premium fuel (227 on regular) and a not-insignificant 310lb-ft of torque.

That torque number handily eclipses the fabulous Mazdaspeed 6 of the mid-2000s and is easily felt when unwinding the throttle to pass a left-lane lollygagger. Just don’t go looking for all-wheel drive or a manual transmission; both those options were binned in the Canadian market for 2018.

Rolling into the ferry terminal at the Nova Scotia town of Caribou, I’m instantly reminded why I still choose to live on the East Coast. While waiting for the ferry to PEI, cars, and trucks are supposed to line up in neat rows, whose lines and numbers are clearly marked with bright paint on the pavement. A handwritten sign in the security booth tells drivers to “Please line up in Lane 10”, along with a happy face drawn in the corner of the paper. Sure beats a crushingly self-important Commissionaire with a bullhorn shepherding drivers around a parking lot.

The 8:00 am crossing leaves precisely on schedule. Maritimers have an innate respect for the sea, even if this morning’s ocean is calm and flat as a dinner table. A late departure from the ferry terminal would be akin to thumbing one’s nose at Poseidon himself, or at least Davey Jones. The servers in the boat’s galley dish out a hearty Maritime breakfast. 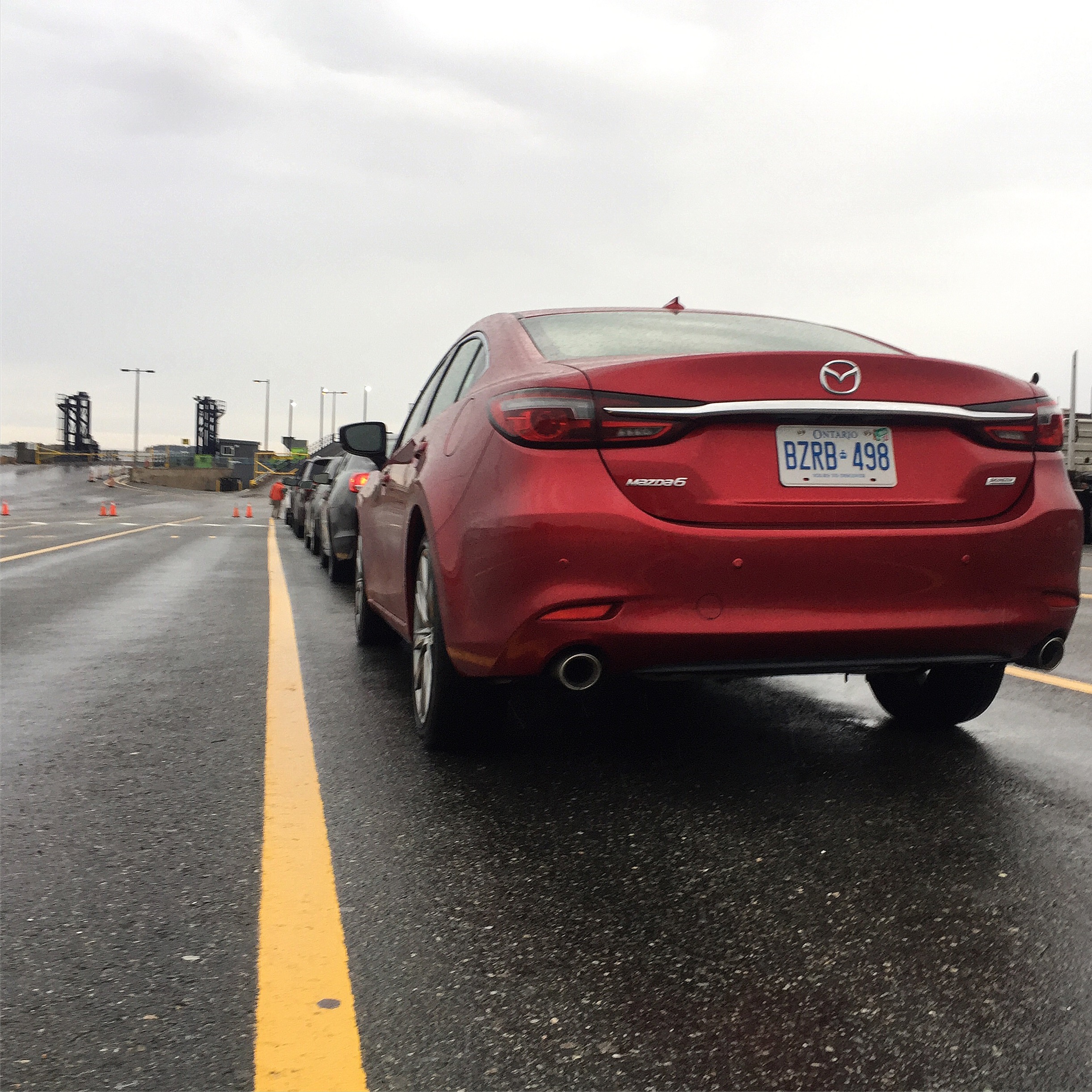 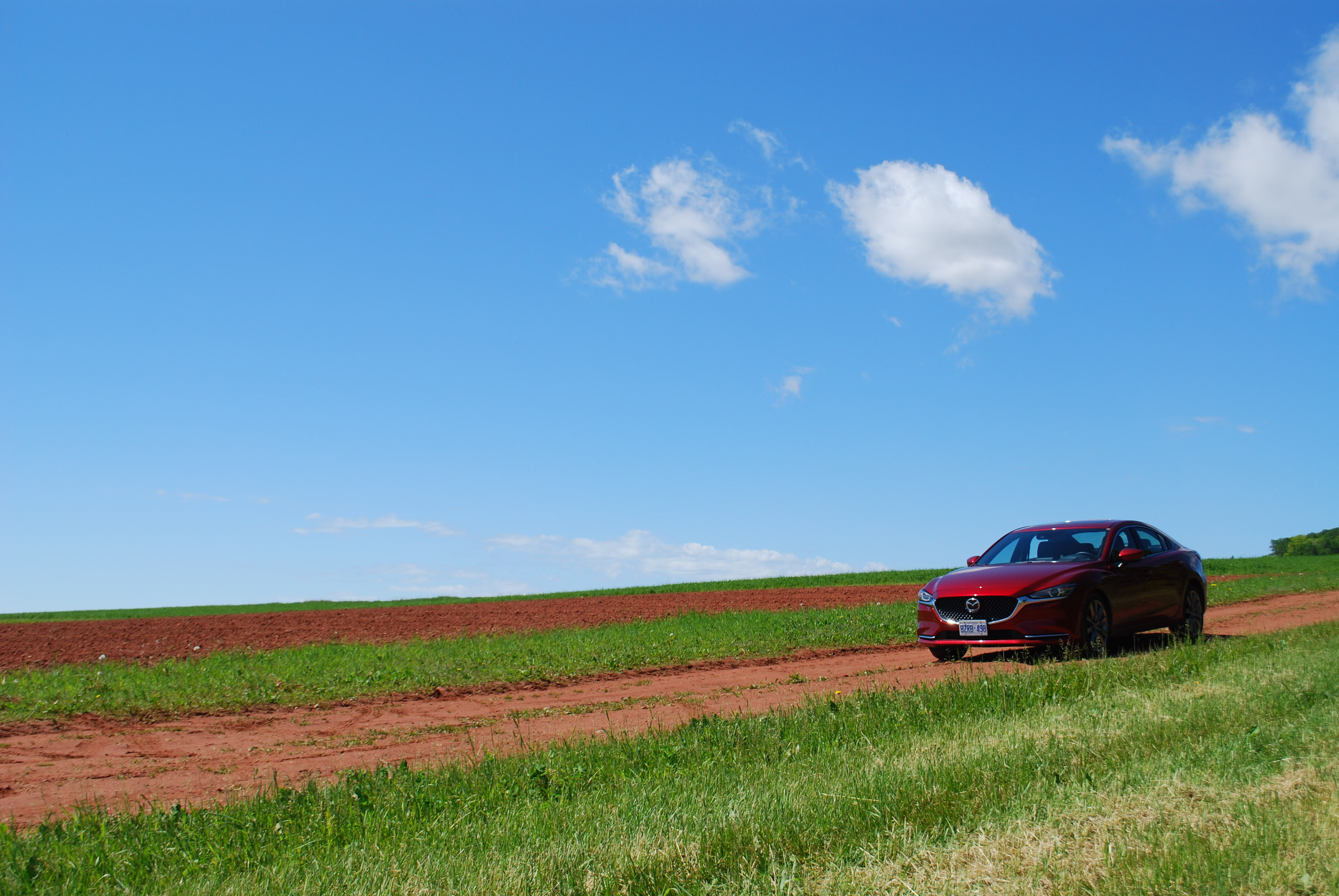 Unloading at the ferry dock in the little town of Wood Islands reveals the uniqueness of Canada’s smallest province. Its lush landscape is made up of gently rolling hills, ocean coves, and red dirt make for something right out of a postcard, especially when one considers just how many of our country’s population lives in a concrete jungle. The sun is breaking out through puffy white clouds, raising the air temperature.

I’m glad it’s not too hot, as the air conditioning system on this particular Mazda6 acts an awful lot like a blowhard politician: full of sound and fury but doing little of anything. Gunslot-narrow dashboard vents surely play a role in lack of airflow, as turning the fan to its highest setting simply provided a result similar to that of being wheezed upon by an asthmatic blowing through a straw. We’ll have another Mazda6 on test later this summer and will report if the problem shows up on that machine or was a quirk of this particular unit.

The rest of the interior is attractive, with natty speedometer illumination that lights up a 20km/h bookend of your current speed rather than brightening the entire dial. It’s calming effect in a world where we are constantly bombarded with information, not unlike the effect of Prince Edward Island itself. A swath of Ultrasuede spearing clear across the dashboard lends an upmarket feel to the whole driving environment. Interior door handles are beautiful and thin chrome spears, feeling expensive and absent of flash, perfectly contoured for a hand on their anterior side. 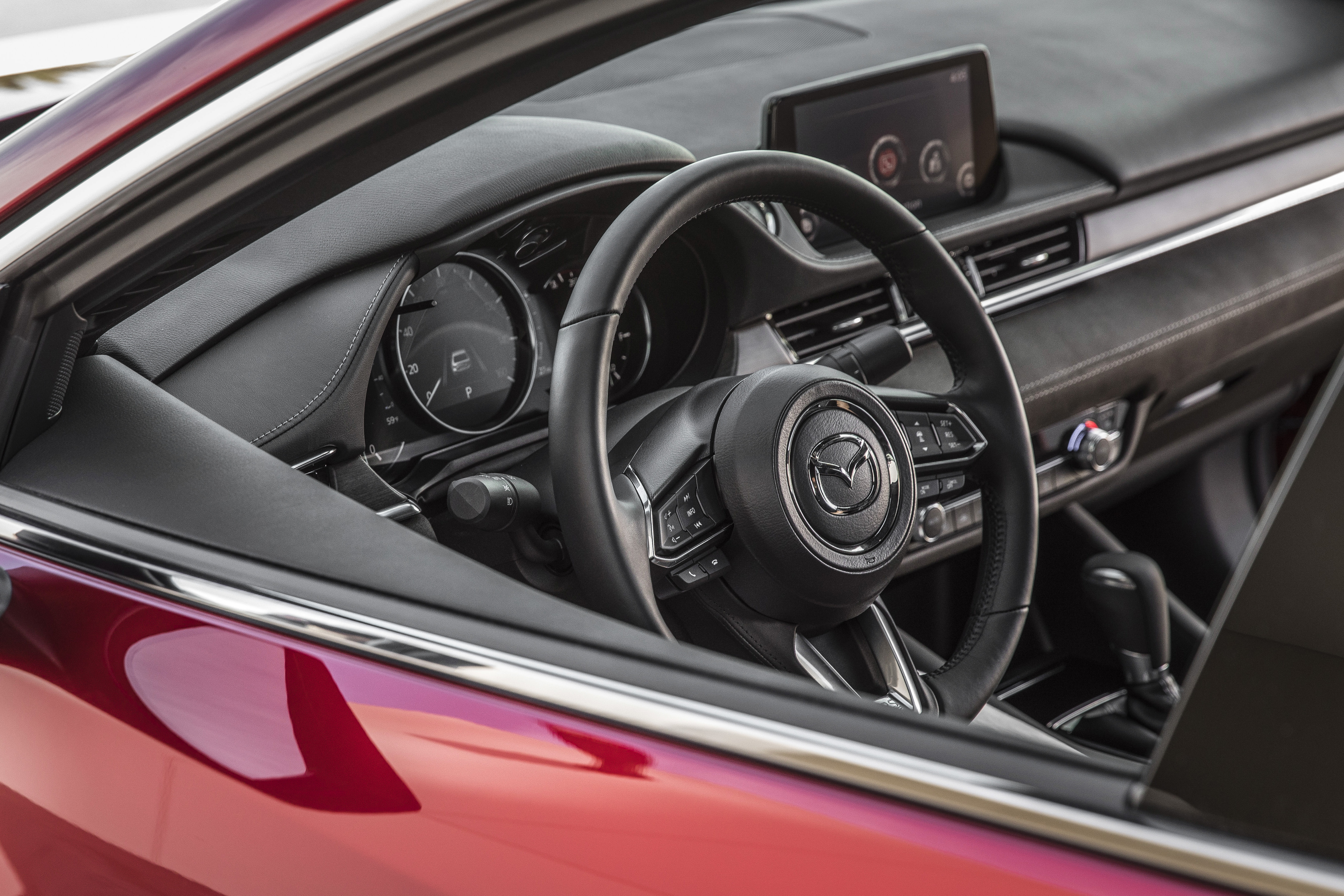 Unlike Nova Scotia, there are no four-lane divided highways to carry drivers all the way across Prince Edward Island, a development that I hope never changes. The province’s road network spiders out across the island like a web, filled with two-lane blacktop and red dirt roads. Just outside the capital of Charlottetown, vast potato fields provide a full 25% of Canada’s potato production, proving the spud is more than just a stereotype.

Even though the island life encourages one to slow down and smell the taters, there is still ample opportunity to dispatch the plodding tractors and farm equipment which pop up on PEI roads faster than dandelions pop up in my own front yard. The turbocharged engine zings the Soul Red sedan to passing speed with ease, never leaving the driver hanging out to dry in the passing lane as they face oncoming island traffic. Mazda should put this engine in the CX-5 crossover as well.

Confederation Bridge back to the mainland appears more quickly than expected, as it’s a mere 110km from the ferry landing back in Wood Islands. Stopping along the shore, I drink in huge lungfuls of salty sea air, a true elixir for this Maritimer’s soul.

Over the fixed link and to New Brunswick, then, where we complete the Maritime Hat Trick. After loading my smartphone to the gunwales with seaside pictures, I find its battery to have dropped faster than Netflix dropped Roseanne Barr. The Mazda has a wonderful smartphone-sized open bin ahead of the shifter, in which they should put a couple of USB ports. As it is, the USBs are tucked away under a covered centre console, leading your author to string a web of charging cords around the cabin sufficient to tangle all the Flying Wallendas.

Back on the mainland, driving through New Brunswick’s forested southeast corner, I marvel at how quickly the topography can change in this part of the county. From salty ocean breeze to aromatic evergreens in the space of a few minutes. Fueling up at a small-town gas station, I learn the Mazda6 has returned 6.8L/100km on our journey, an excellent figure for a stretch-em-out turbocharged sedan.

Stopping off for a robust feed of fish-and-chips and never-ending conversation at a local diner put an exclamation point on the fact that, yes, things do seem to go a lot farther in the Maritimes. Turns out I didn’t need a Lotto 6/49 commercial to tell me that after all. A simple 375km drive (and 75 minute ferry ride) proved it in spades. 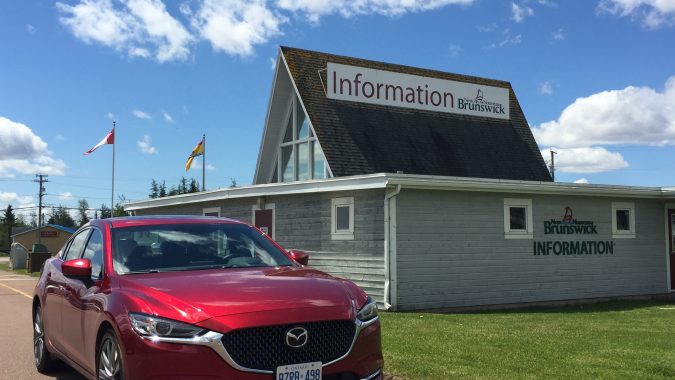 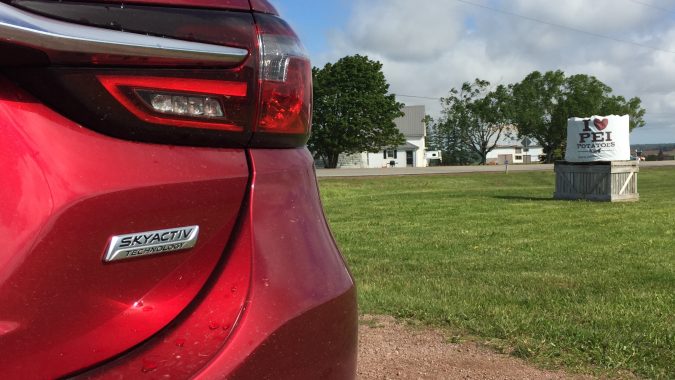 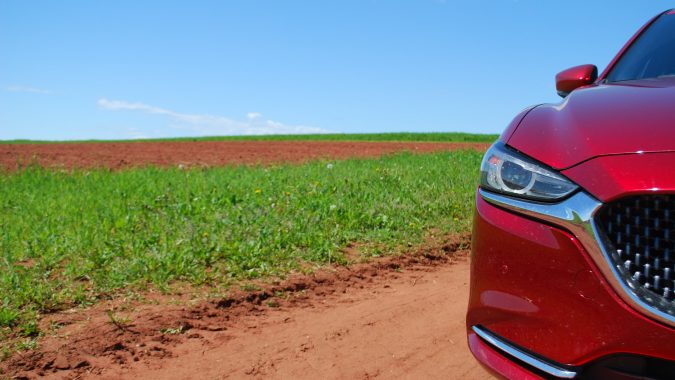 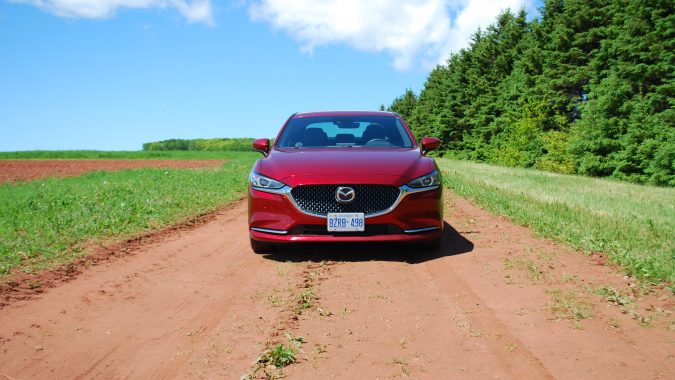 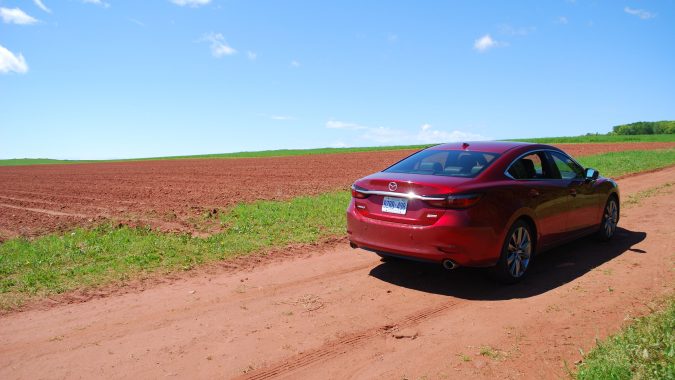