The 570S begins as all McLarens do with a rigid, lightweight carbon fibre tub, which is key to the 570S’s magic. Here’s the thing, while anyone can do a carbon fibre tub, not many supercar builders do, and certainly none in the volume that McLaren does, which makes the company’s range of cars very unique.

The 570S weighs in at under 3,000 pounds making it very light on its feet, and with that rigid chassis, it allows McLaren’s engineers to calibrate the suspension with a remarkable combination of comfort and handling. Unlike the 720S, the suspension is a straightforward setup, featuring double wishbones, conventional anti-roll bars, springs, and adaptive dampers.

The engine is a variation of McLaren’s twin turbo, small-ish displacement V8, here just 3.8 litres. Sure, we can be a bit desensitized given today’s power wars, but 562 horses at 7,400 RPM is nothing to sniff at.

On the other hand, unlike most modern turbocharged engines, the 570S makes a relatively modest amount of torque, just 443 pounds, with peak torque at a very high 5,000 to 6,500 RPM.

Still, even with the turbochargers, throttle response is crisp and linear, and if you didn’t know any better, you’d think this was a naturally aspirated engine. It’s that good.

Even with those qualities, it’s brutally quick. Zero to 100 km/h in 3.2 seconds, the quarter mile in under eleven seconds, and it tops out at 328 km/h. 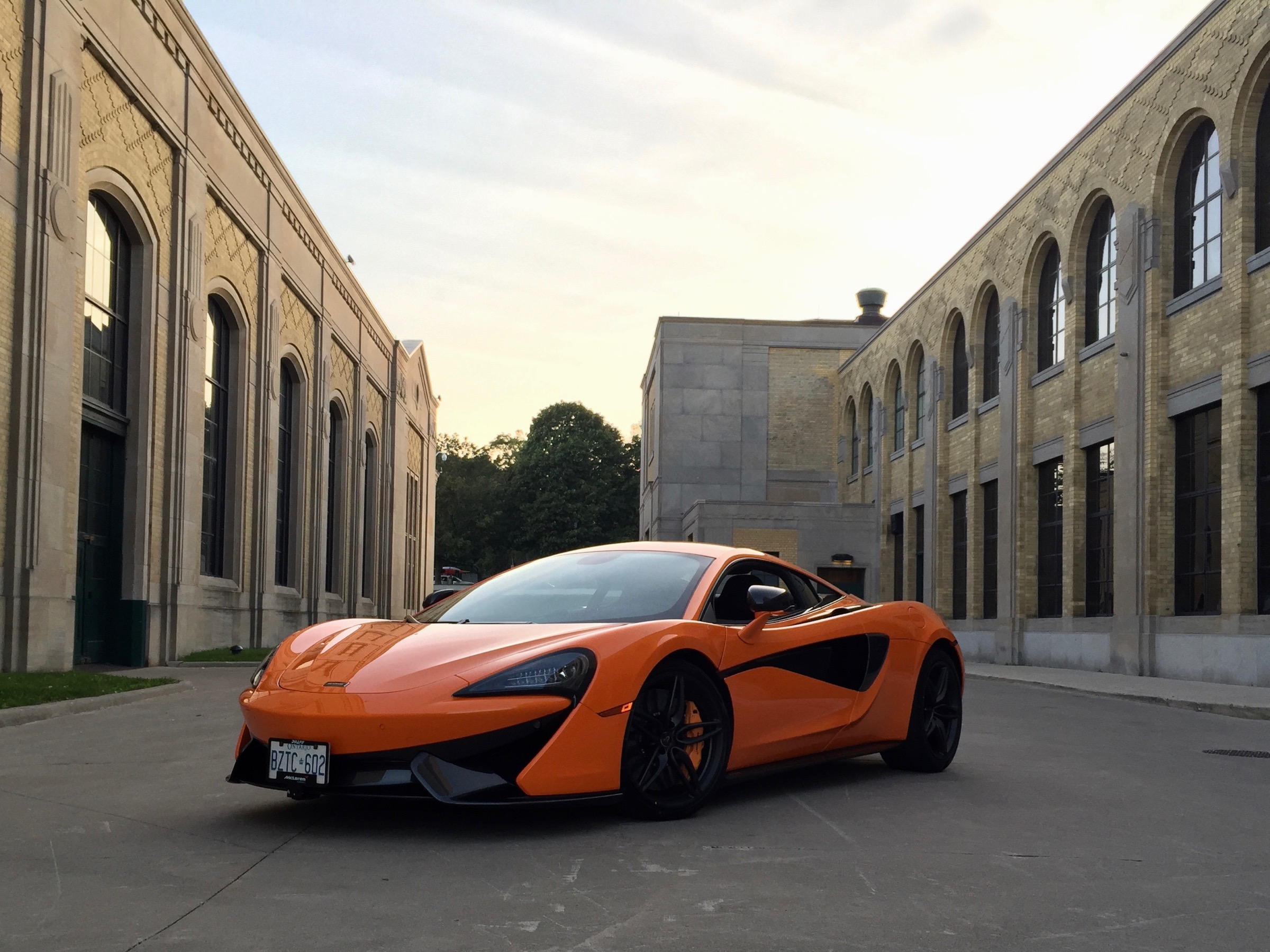 The 570’s acceleration and overall driving pleasure is helped by the exceptionally quick, seven speed dual clutch gearbox. McLaren calls this their “seamless shift gearbox” and, yes, it is pretty darn seamless. Shifts are effectively imperceptible, which is the key reason modern supercars have gone in this direction.

Seating position is near perfect, with excellent forward visibility, and the cabin feels airy and open, despite the narrow pitch between the seats. The interior design is McLaren minimalist, entirely the opposite of the Italians, who seem to prefer visual drama for their cabins.

What makes the 570S unique is its design ethos – indisputable supercar performance, in a British supercar package, but with a ride that’s comfortable enough for a long road trip. This supercar recipe is something that McLaren is able to deliver, across its range, without compromise.

From behind the wheel, the quality of the steering feel is what strikes you first. Response is immediate, the nuances of the road surface coming from the front contact patches are apparent, and you feel on top of the 570S, rather than reacting to it.

The steering rack is on the quick side, just the way I like it, and the power assist is hydraulic. It’s a rarity today given packaging and mass considerations, but there’s no electric steering set up that can provide that high fidelity feedback that a hydraulic system does.

Dynamically, the 570S has plenty of inherent mechanical grip, putting down power on corner exit with zero drama, and as speeds increase, there’s a little positive aero effect to assist. 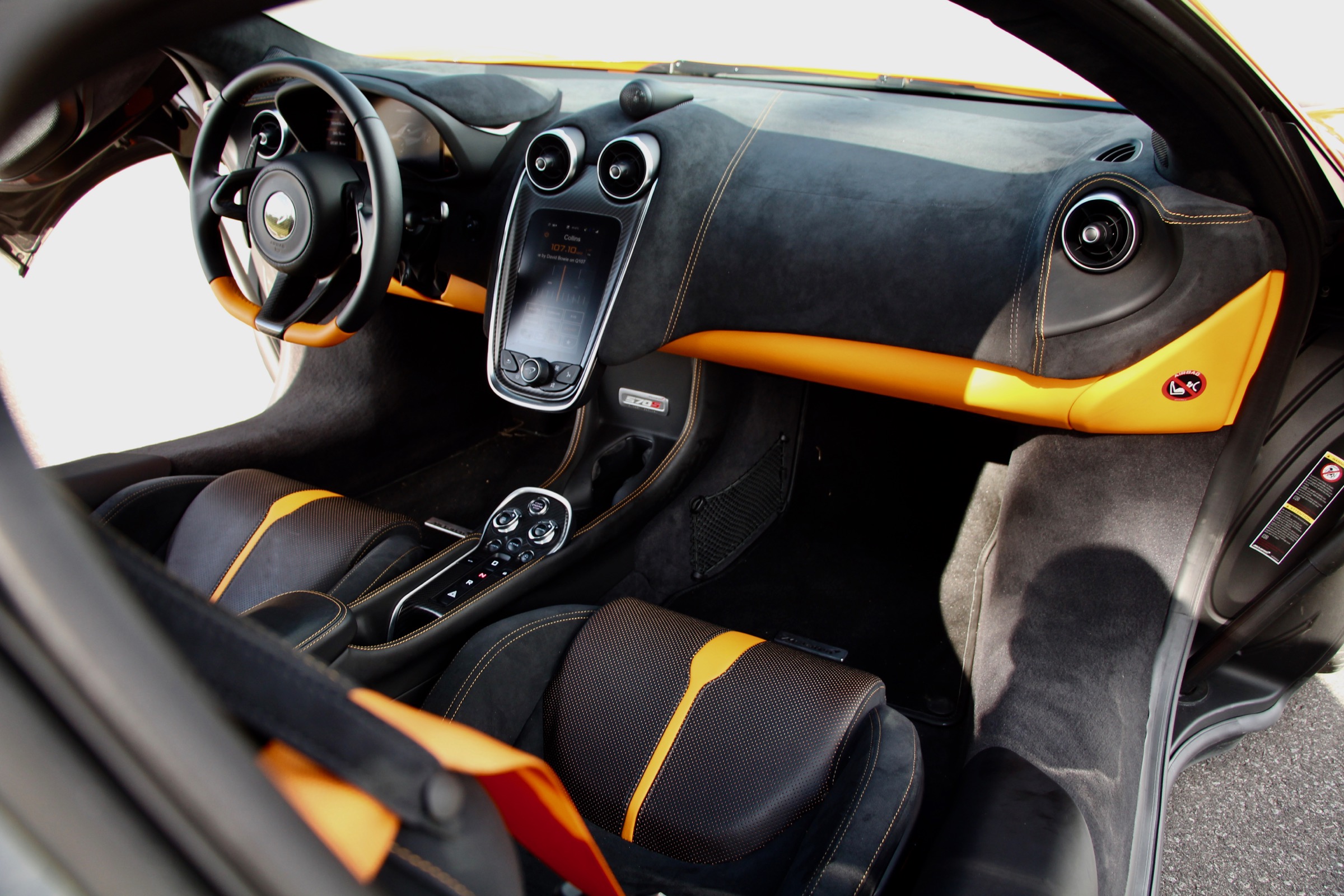 Relying on the company’s history in Formula 1, the 570’s traction and stability systems work imperceptibly. Unlike nearly every competitor, near and far, the 570S uses an open differential and relies on software that subtly applies the brakes to manage its cornering attitude. Like the gearbox, interventions are seamless and, unless you’re on the track, you’d be hard pressed to feel the systems working.

Overall, my complaints about the road car are minor. The aggressive brake actuation at low speeds can be annoying if you do a lot of city driving in the 570S, plus there’s the front axle lift system that should be activated by a button instead of digging down into a menu. Other than those complaints, and the fact that there’s not a 570S in my garage, there’s nothing more to say except that I love this McLaren.

Receiving the invitation to spend some time behind the wheel of Compass Racing’s McLaren 570S GT4 makes for a pretty special week, let me tell you. Naturally, there’s not a chance I’d decline this sort of opportunity, despite the fact I’d be driving the very expensive racing version of a hand-built British supercar on the very fast and very unforgiving Watkins Glen circuit.

Thankfully, the team’s lead driver, Paul Holton, would be on hand to help me acclimatize to the racecar. As a factory McLaren driver, Holton has some duties beyond just racing this car. “I’m tasked with GT3 and GT4 development going forward,” Holton tells me. “I’m racing with customer teams and showing what the cars can do. Being associated with McLaren is very special and confidence inspiring. It’s very cool.”

Like the BMW M4 GT4 I tested earlier this year, the 570S GT4 was developed to conform to global GT4 racing regulations. In this part of the world, the 570S GT4 competes against the BMW M4 GT4, of course, Porsche Cayman GT4s, AMG GT GT4s, and Mustang GT4s, among others.

The 570S GT4 is very closely based on the road car and uses the same carbon tub, the same engine, the same transmission, and save for the roll cage and necessary racing bits, the interior is nearly a direct carry over from the road car. Even the turn signal stalk is there – which I used to direct a Porsche 962 to pass me. That’s another story for another day. 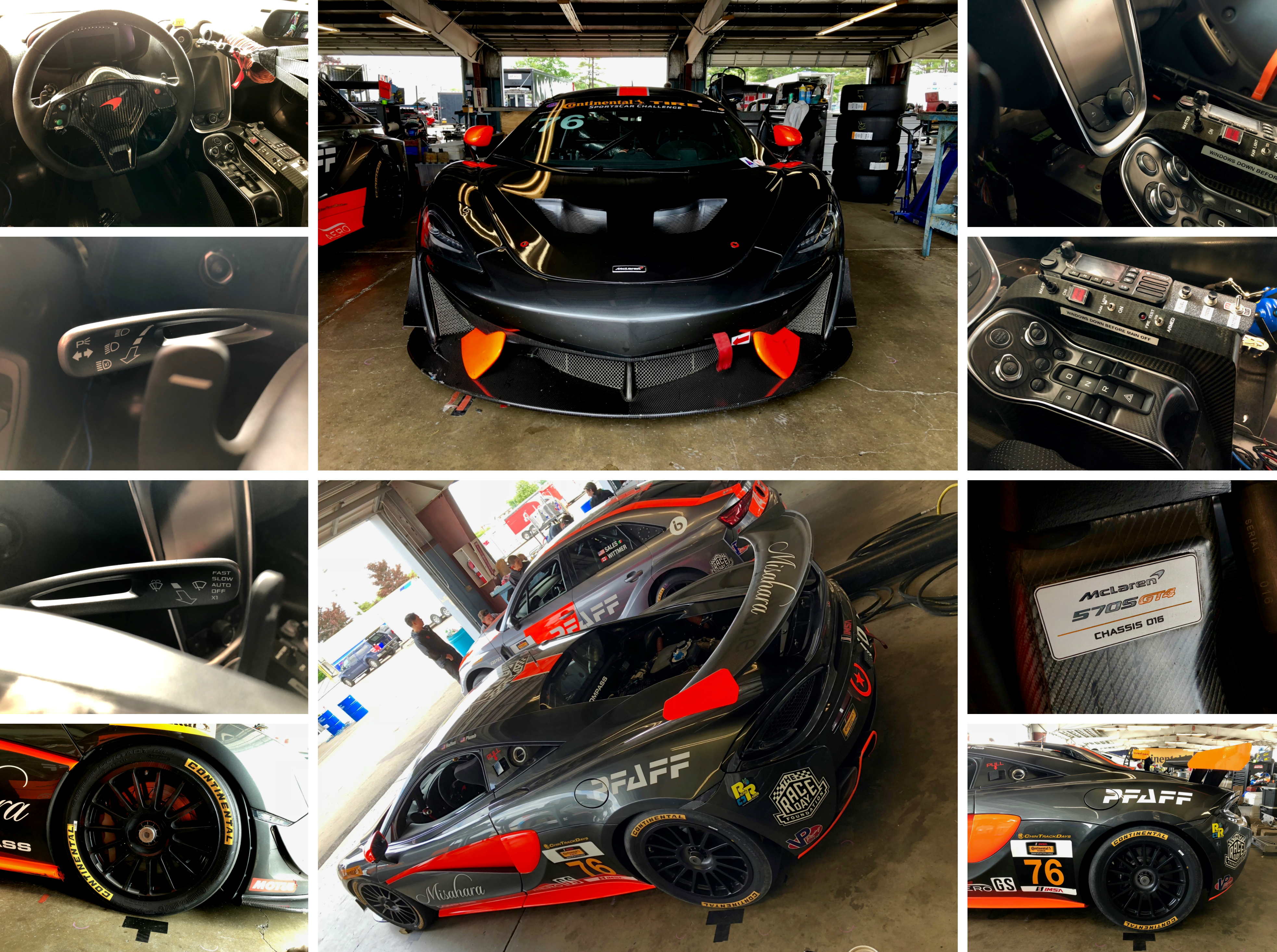 The steering wheel is nearly identical to the street version, omitting the airbag, of course. The shift paddles are the same as the road car, as are the brake and throttle pedals.

The aero package is slightly different with a tall, fixed rear wing, a large, fixed splitter at the front, and a bonnet reshaped as an exit duct for the big racing radiator located in the nose of the car.

Before I get behind the wheel of the GT4, I have a chat with Holton and, thankfully, he’s got some pointers for me, because piloting this McLaren definitely has some unique challenges.

“You’re taught at racing school to look through the car ahead of you,” Holton tells me, “But it’s hard because the McLaren sits so low compared to the other cars and you’re looking at their taillights. Our car is quite poised, but it doesn’t have the outright grip because of the amount of weight we carry, but the way it handles and the way it transitions is very nimble, very cat like and agile even despite all the Balance of Performance adjustments.”

“My advice to you is that you have to work with the electronics, the stability control, the traction control because they can make your life real easy or real hard, depending on how you treat them,” Holton says cautiously. “In the McLaren, you tend to square up the corner, it’s kind of a point and shoot car. Think about having two sectors to the corner, a deceleration phase and an acceleration phase. That’s the quickest way to get this car around a race track.”

As soon as I slide behind the wheel and fall into the deep racing bucket seat, the sightlines from this racing supercar are unlike anything else I’ve driven. While I’ve never driven one, it’s romantic to think that this might be the view I’d get driving a prototype rather than a production-based racecar.

Shortly after rolling out onto the track, it strikes me that this McLaren is tiny compared to the other GT4s. The Mustangs and BMWs are so tall in comparison that they seem like school buses. From the driver’s seat of the 570S, you’re at the bumper height of the competitors, which is probably good and bad from a wheel-to-wheel racing standpoint.

The biggest difference between the 570S and 570S GT4 is that the racecar is making roughly 100 horsepower less than the road car. Plus, it carries nearly 200 kilograms of ballast, making it the heaviest car in the IMSA Continental Tire SportsCar Challenge GS championship in which it competes. You heard that right – this McLaren has to be massively detuned in order to compete against these other GT4s.

But let’s not forget that there’s road car fast and there’s racecar fast, and this McLaren racecar is much, much faster than the road car on the track. I’m enjoying that same excellent steering, with the quick rack and excellent feedback, but even more so than in the road car, the GT4’s steering feel and feedback are telepathic. It gives me massive confidence behind the wheel and I think that it’s a significant advantage over the BMW M4 GT4’s steering feel.

I’m driving my laps during an open test day and the speed differential between this Compass Racing McLaren and any of the road cars is staggering. Racecar fast, indeed. Still, compared to top IMSA Continental GS lap times, I’m well off the pace since this isn’t my car and I’m being very careful and, well, Paul insists he wants to race this car in the near future.

Also, I’m braking with my right foot simply because I’m more confident with my right, but the trick is certainly to left foot brake this thing, so that’s not doing me any lap time favours, either. No, I’m not sharing my lap times, thank you very much.

For all the cool racecars I’ve driven, this McLaren is near the top. What’s interesting to me is that while it’s a production-based racer, it gives you the feeling of piloting a purpose-built prototype racecar, the sort of thing you see at Daytona and Le Mans.

Among its competition, this 570S GT4 is also very close in specification to the road car, perhaps the closest of all GT4s, and that’s the spirit of GT4 – to race on Sunday what you sell on Monday.

Most importantly, though, I think it must be brilliant to race this McLaren wheel-to-wheel against some truly stout competition. Yes, Paul, if I’m being honest, I’m a bit envious. 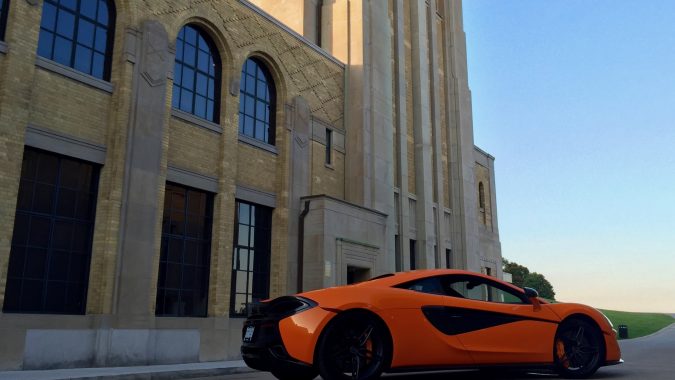 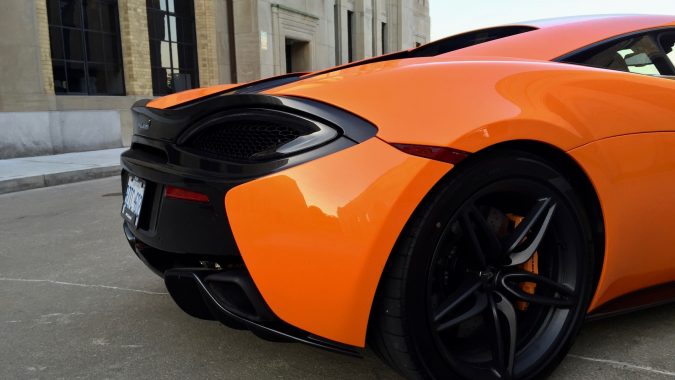 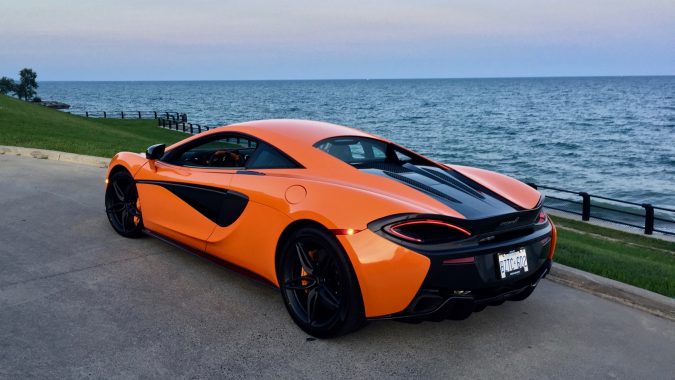 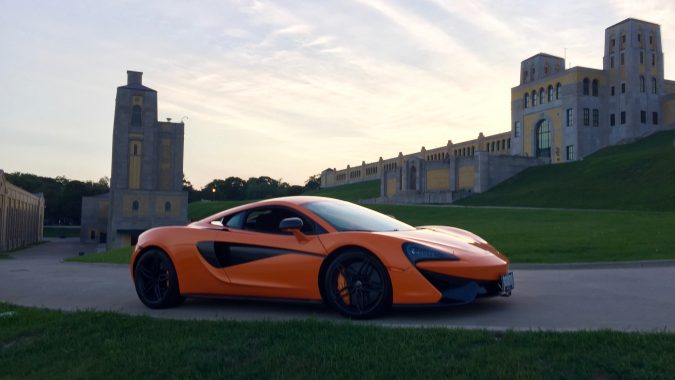 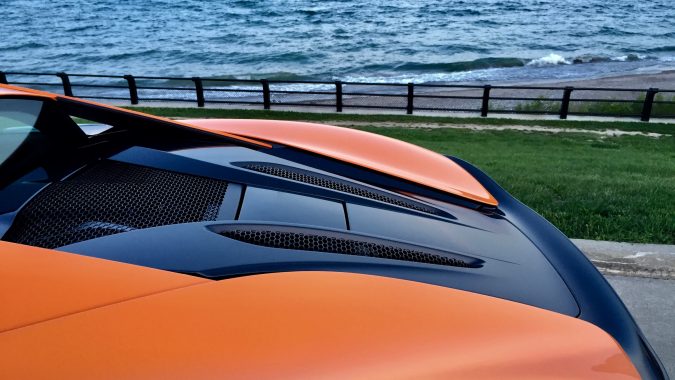 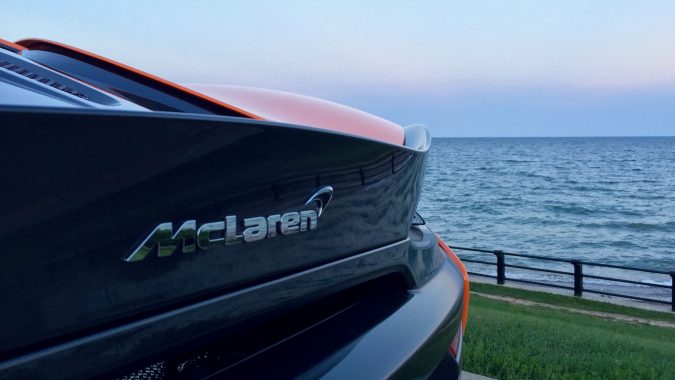 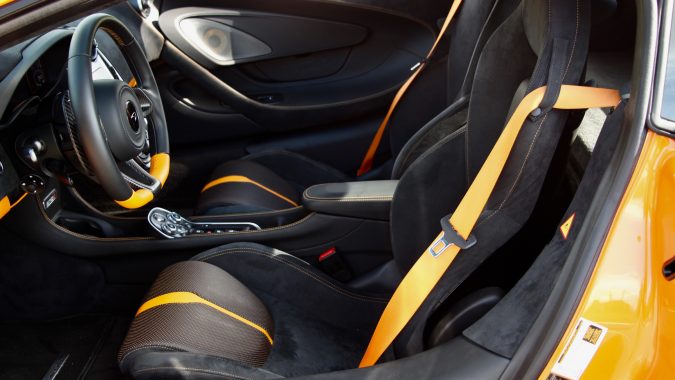 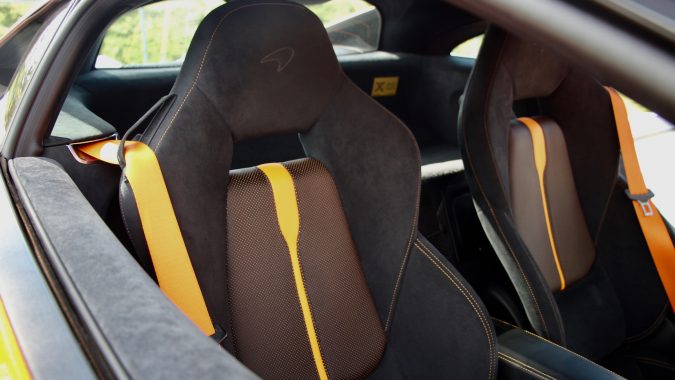 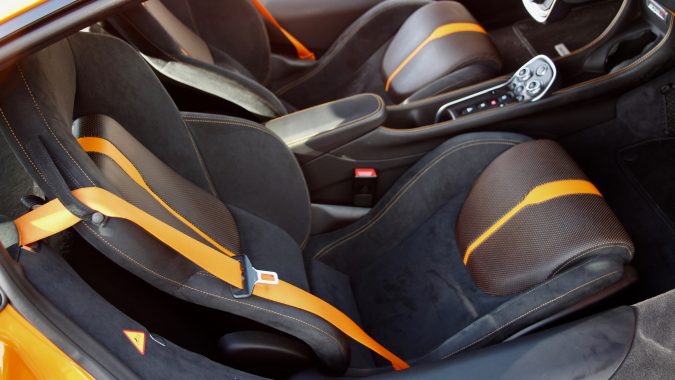 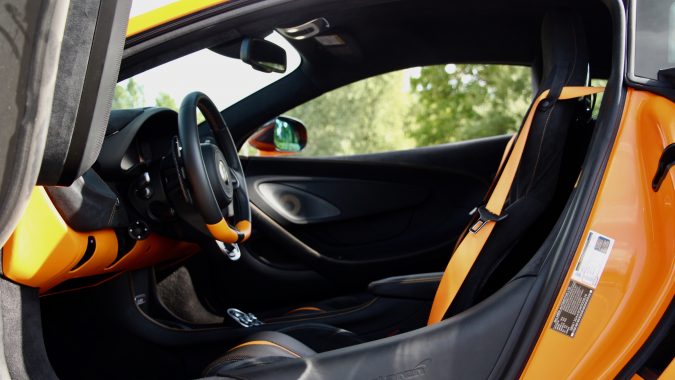 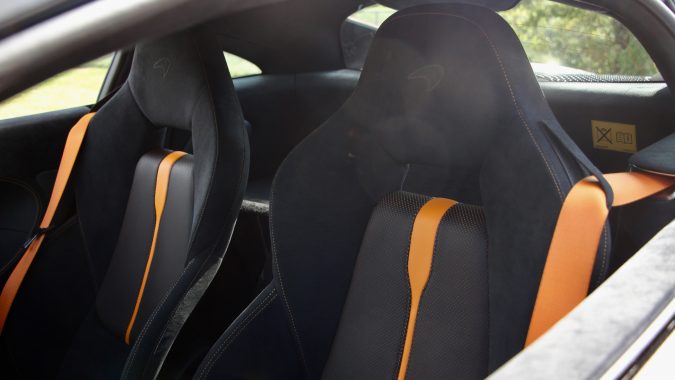 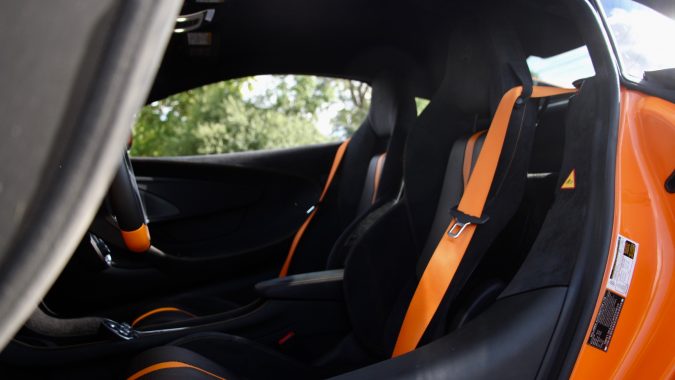 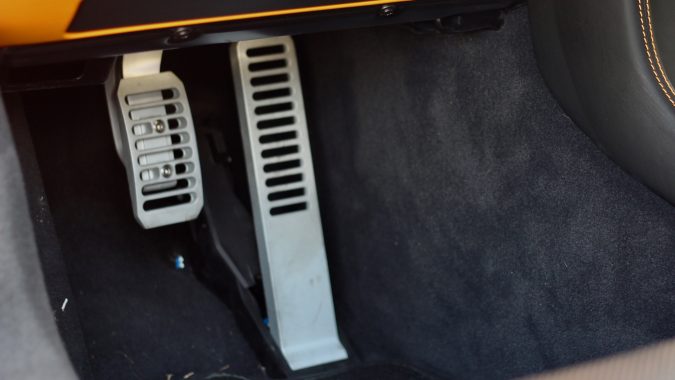 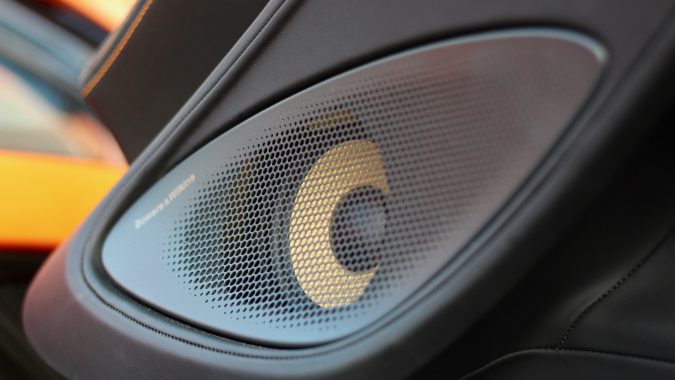 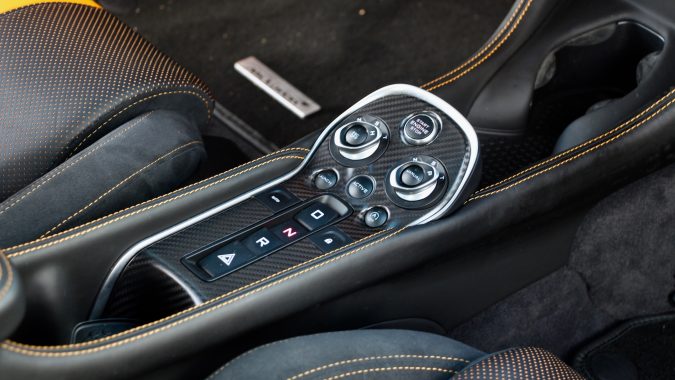 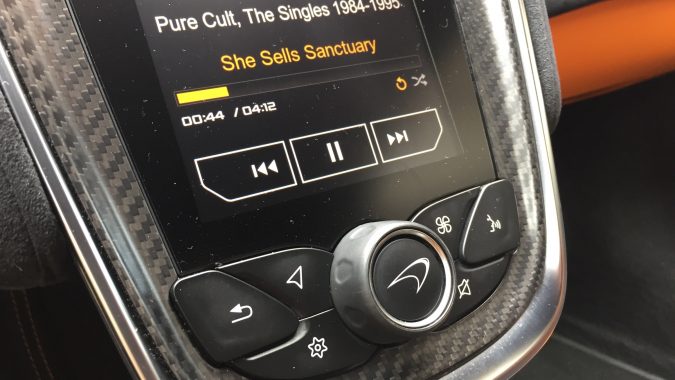 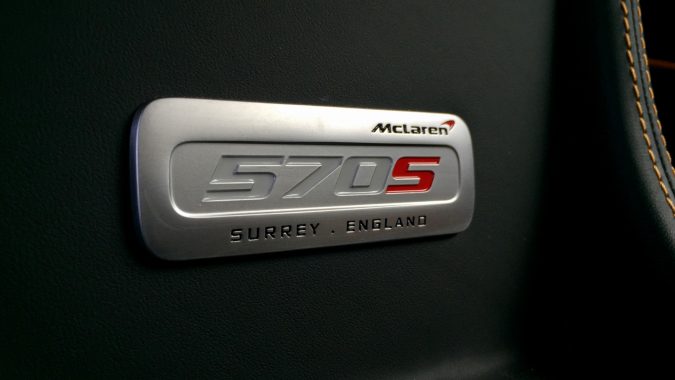