Review: Don’t forget the other ‘6’

The Mazda 6 has undergone a mild refresh, with subtle updates to the exterior and a completely revamped instrument panel and centre console for 2016.

This is the question that the Mazda 6 might be asking the Canadian mid-size sedan shopper as it nervously taps the mic and looks around the room. After all, the 6 is an attractive and dynamic alternative to other mid-sizers such as the Toyota Camry, Hyundai Sonata, Honda Accord, and Ford Fusion, yet it was outsold last year by the diminutive Fiat 500 compact city car. How did that happen?

Introduced in early 2013 as a 2014 model, the 6 has already undergone a mild refresh, with subtle updates to the exterior and a completely revamped instrument panel and centre console for 2016.

This allowed Mazda’s flagship sedan to offer features already found in the smaller 3, including Mazda’s latest infotainment system and console-mounted rotary controller. Sadly, it has also meant the demise of the handbrake, which has become electrically operated. 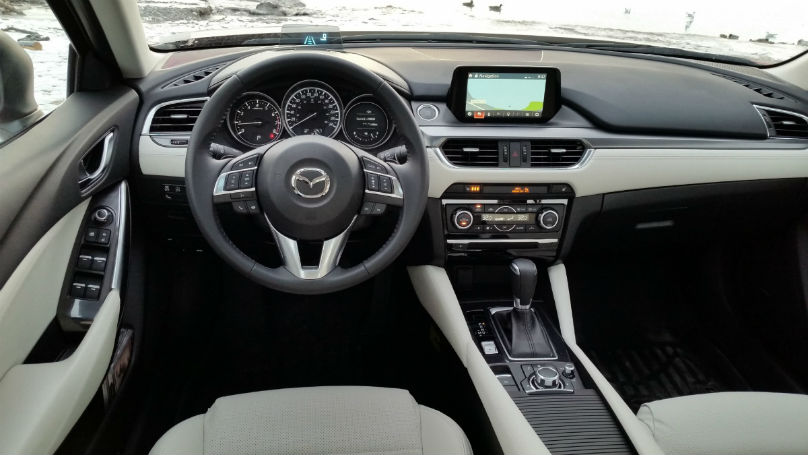 The 6’s cabin is suitably spacious for sedan duty, with decent rear seat headroom in spite of the rakish roofline and my $39,995 GT top trim tester’s sunroof. The split rear seat folds nearly flat to expand the capacity of the 419 L trunk, and it comes standard with heaters in all trim levels for 2016 — you’ll find the switches hidden in the centre armrest.

I’d skip my tester’s fantastic-looking white leather seats if a blue collar job, kids, or even regularly wearing jeans is part of your lifestyle. Opt for the black. Trust me.

Unchanged for this year is the powertrain. Despite initial plans to offer the excellent 2.2-litre diesel that’s available outside of North America, it hasn’t happened. I suspect Volkswagen’s woes have likely nailed that coffin shut.

We do get the 2.5-litre version of the Japanese company’s gasoline-powered SkyActiv-G four cylinder engine, and it’s anything but a consolation prize. Fitted with direct-injection and obsessed over to the gram, it’s both efficient and smooth, producing 184 horsepower and 185 lb-ft. of torque — solidly midpack for this segment.

There’s currently no optional engine, but it doesn’t take a lot of imagination to see the new turbocharged version of the 2.5 that is slated for the upcoming CX-9 crossover as a future 6 offering.

The 6 is one of the few sedans still available with a manual gearbox; more than that, it’s available in all trim levels, though you can’t get the 6’s top safety and active driver aids without selecting the automatic.

With either the auto or stick, you get six ratios. There’s thankfully no CVT or twin-clutch gearbox here.

On all but the base GX, the auto comes with paddle shifters. The console shifter’s manual gate operates counter-intuitively (for those not used to race car sequential gearboxes, anyway), forwards summoning downshifts, during which the engine automatically rev matches.

The 6 features plenty of standard or available technology, from adaptive cruise, automatic emergency braking, a head-up display, and even Mazda’s clever i-ELOOP capacitor-based energy recovery and storage system. It isn’t a hybrid design, yet it improves the 6’s fuel consumption ratings by a few tenths of a litre per 100 km vs. non i-ELOOP models — I saw a laudable 8.8 L/100km.

The switch to Mazda’s latest infotainment system is a good one, as it’s among the more intuitive of the rotary knob type systems. Not having a dash-mounted volume knob (it’s on the console, next to the large control knob) takes getting used to, though. Fortunately, the screen itself is touch-sensitive, and navigation is an easily-added dealer accessory in 6’s that don’t already come with it.

Almost everything else falls readily and intuitively to hand. Everything, except that darn parking brake. It’s located in-line with and resembles the automatic’s mode switch. Bah!

One obvious omission in today’s market is the lack of a heated steering wheel.

While most automakers today pitch their vehicles as sporty and driver-oriented, Mazdas actually are — sometimes to a fault — sacrificing a small amount of isolation or comfort in the quest for tactile feedback and driver involvement. Consequently, there’s more engine noise (particularly under hard acceleration) in the 6’s cabin than you’ll find in say, a Toyota Camry, or even the outgoing Chevy Malibu.

The steering is more lively over rutted pavement, and the ride has slightly more harshness over small imperfections than you might experience in a Sonata or Accord. Oddly, larger bumps are dispatched with little drama.

Save for more wind noise than expected, it’s all a fair trade for a car that communicates with you, one that drives smaller than it is, able to eke out little snippets of joy during a commute, even if it’s just precisely carving the apex along a highway on ramp. More than just lip service, if you enjoy driving, the 6 should be on your short list.

The vehicle for this review was provided by the manufacturer. To provide feedback, email wheels@thestar.ca