For 2022, the Kia stinger gets a few tweaks, a new trim level, and an all-new badge.

The Kia Stinger GT may have had the most interesting releases that I can remember. The main reason for that is how it started life as the GT4 Concept, which was actually a two-door, long-hooded, rear-wheel-drive (RWD) GT car first seen at the 2014 North American International Auto Show. It made sense. After all, Kia’s parent Hyundai was making waves with its Genesis Coupe, so why shouldn’t the some-would-say-more-youthful Kia brand get a sports car to call its own?

That was just a concept. The Stinger did eventually make production, but when it did – also at the North American Auto Show, this time in 2017 – it had gained two doors, somewhat more conservative styling (which is no surprise considering the GT4 was a concept vehicle) and an extra set of drive wheels, though it is available in some markets with RWD. At the show, Kia was pretty clear, they needed to go another way – one that would likely move more units – and so they did. 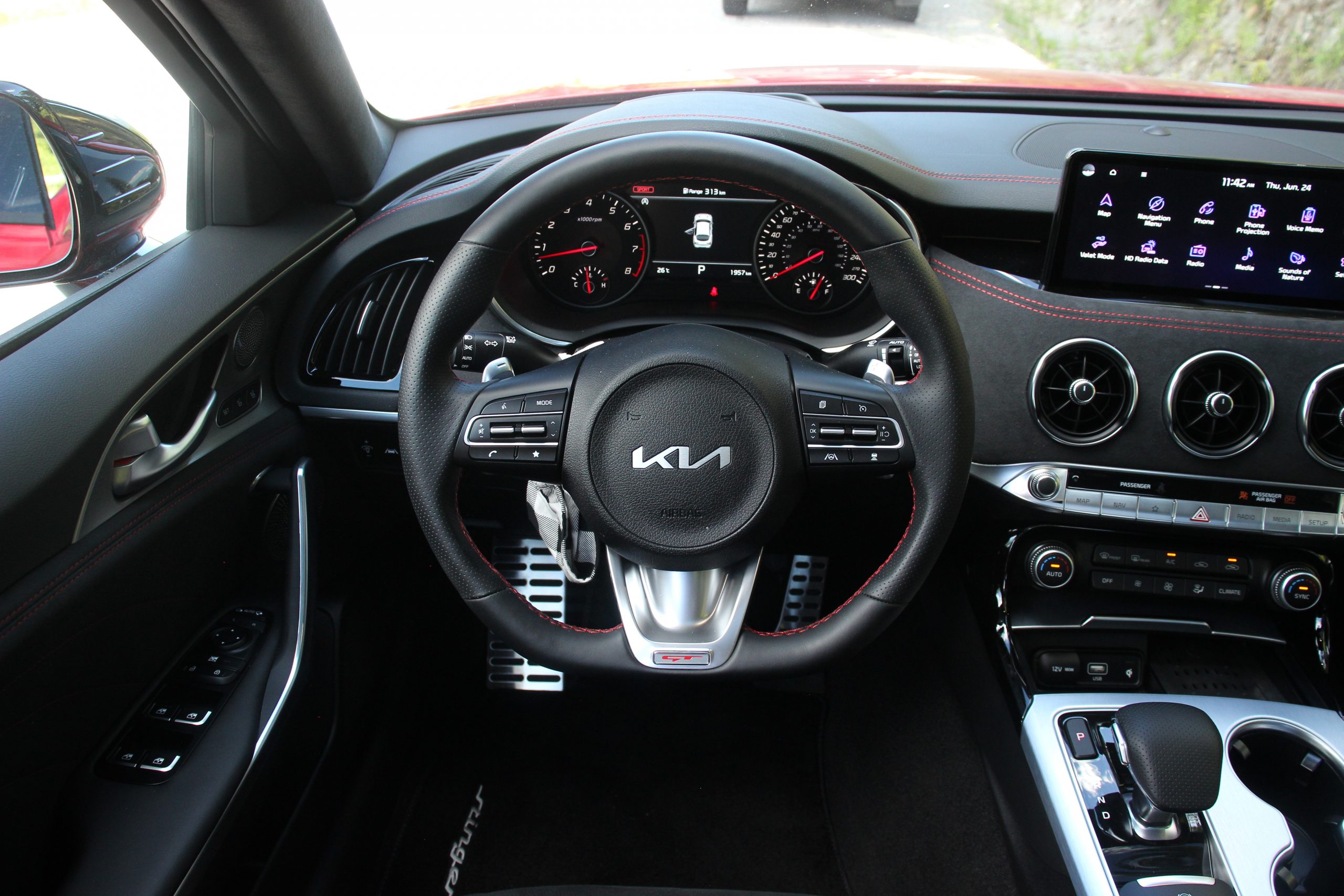 Thing is, the “real” Stinger was still unlike any Kia we’d seen before it. It was a mid/full-size hatchback with twin-turbo power, which is the kind of stuff usually reserved for more expensive cars such as the Audi A7 or BMW 8 Series Gran Coupé. Once you got past the initial shock of the new body shape, the Stinger’s grand tourer qualities did come into focus.

For 2022, Kia is tweaking the Stinger a little bit. They added the “Elite” trim package – $52,995, as sported by my tester – to the top of the line-up, dropped the GT Limited trim ($50,495) down a cog and eliminated the base GT model – that means you can no longer get into a Stinger for less than 50 grand. They’ve also given the Stinger the new “Kia” badge – the company feels it’s a pretty important detail, as it’s ushering in a new era at Kia — new 19-inch alloys, a new Ascot Green colour, different taillamps and more aggressive diffuser with quad-outlet tailpipes. That last tweak really helps ground the vehicle from the rear three-quarter angle, and it looks that much more purposeful as a result. The profile view is a big hit as well. 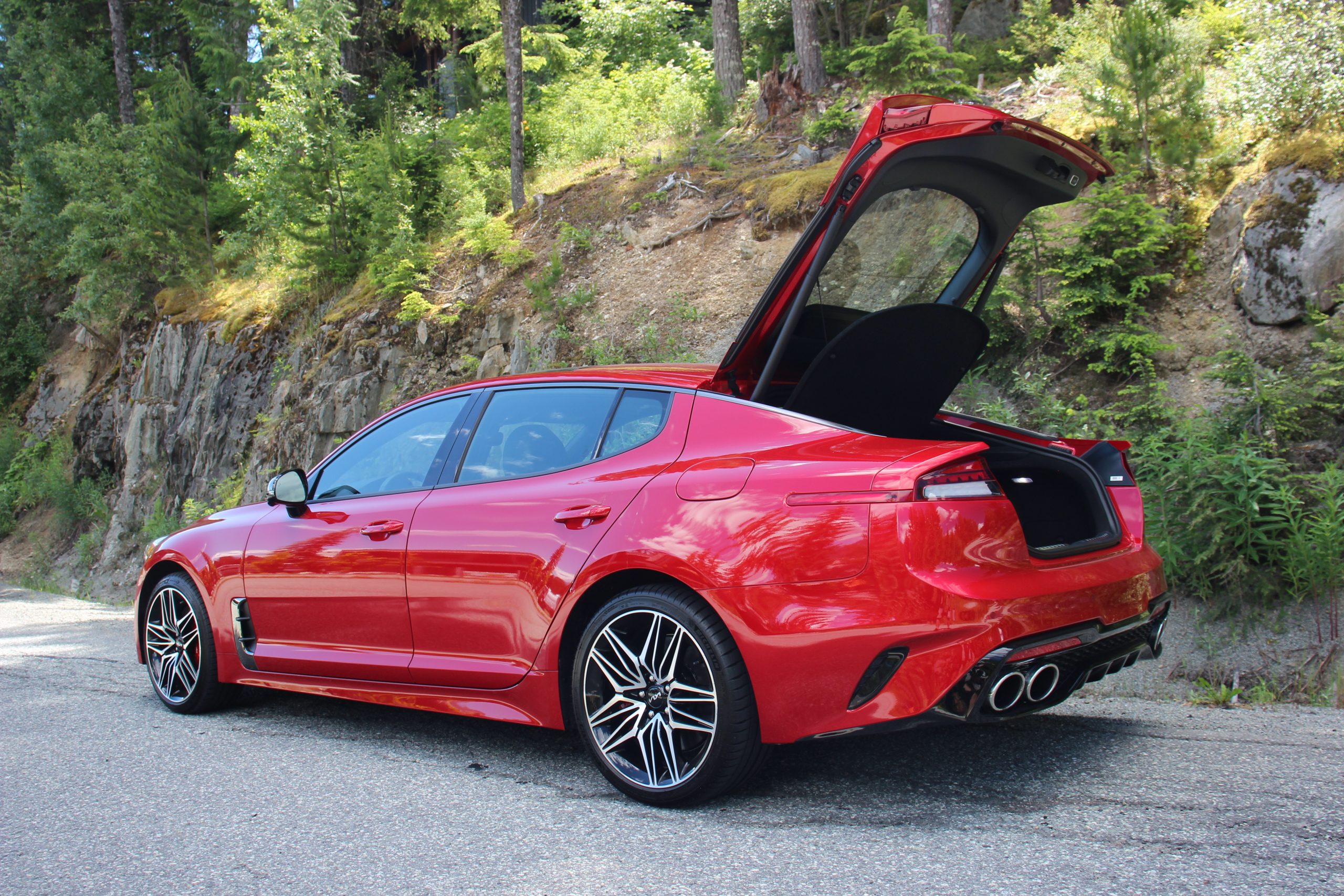 Inside, there are a lot of modern touches although it’s a bit of a mishmash: the vent roundels and aluminum speaker grilles are somewhat Mercedes-esque, while the stubby electronic shift lever is a dead ringer for what’s found in the aforementioned Audi A7. At least they picked some good vehicles to draw inspiration from. That’s all well and good – it’s a handsome and well put-together interior with a driver’s seating position that’s right on the money –the interior could still maybe have used a bit more work. It seems somewhat old school compared to the Kia or Sorento. There’s no digital gauge cluster and no wireless Apple CarPlay (though there is wireless charging), for example. As comfortable as I was in here – and that is, of course, the most important part – I couldn’t get past a slight feeling of Kia’s past.

Of course, once you start it up and ship out, it’s very reminiscent of Kias fast.

Power from the 3.3-litre twin turbo is rated at 368 horsepower and 376 lb-ft of torque – the former is up slightly on the 2021 model, the latter is unchanged – fed to all four wheels via an eight-speed automatic transmission with paddle shifters that you’re going to want to use, because this is a performance-oriented vehicle that deserves an all-hands-on-deck approach.

While the launch from zero will definitely have you holding on tight – especially in “Sport” mode, accessible via a toggle wheel on the centre console – what struck me the most was just how much power was available when already travelling at speed.

Just when you think you’ve got the Stinger to within an inch of its powerband and “Bam!” A cog or two dropped, and another turbocharged surge of forward progress that kept catching me off guard until a few days into my test. This is a car that’s no stranger to in-gear acceleration, and it’s that kind of long-legged performance that a proper grand tourer needs to have to impress to best do its job. I love the sound it makes while it’s at it, all throaty and purposeful like the styling. It’s rich without sounding tinny or overly fabricated, a trend we’re seeing a little too much of in the game these days, even from the bigger fish in the luxury car world. 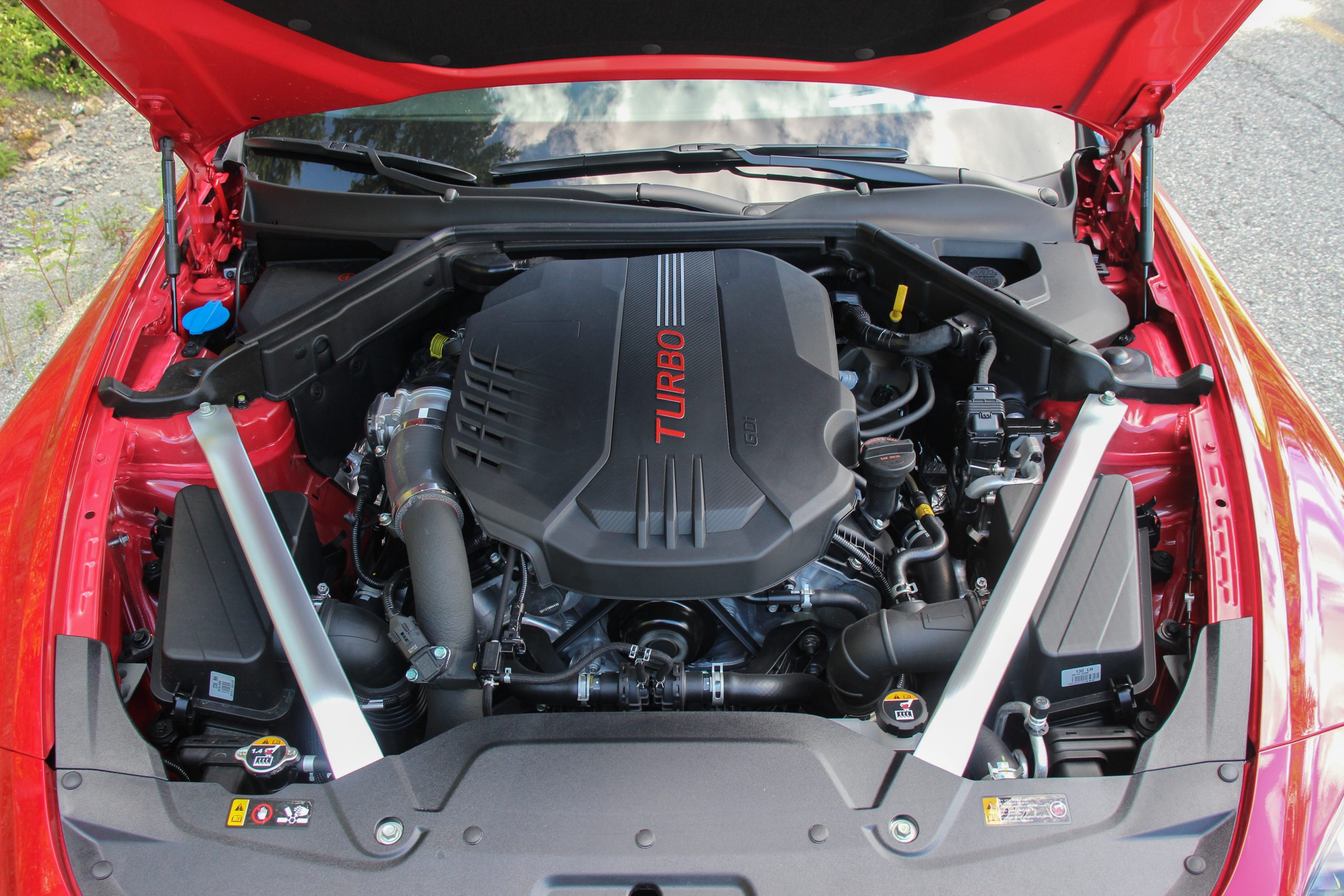 In reality, there’s very little that’s tinny about the Stinger at all – door close could be a little “thunkier”, I suppose, but I tend to be picky about that – as it’s obviously a supremely well-constructed automobile, powered by and engine type that, for my money, pales only in comparison to a V8 when it comes to big-engine heroics.

We feel the weight a little as you start to move through repetitive turns and faster speeds, but the body is kept well in check, evidenced by the heavy bracing in the engine bay. Of course, this not being a sports car per se, the handling is probably not quite as important as the ride itself, and the ride itself is right-on; very few vibrations, very little jarring over bumps and berms. Kia may not have a luxury division, but this deserves to be in one. 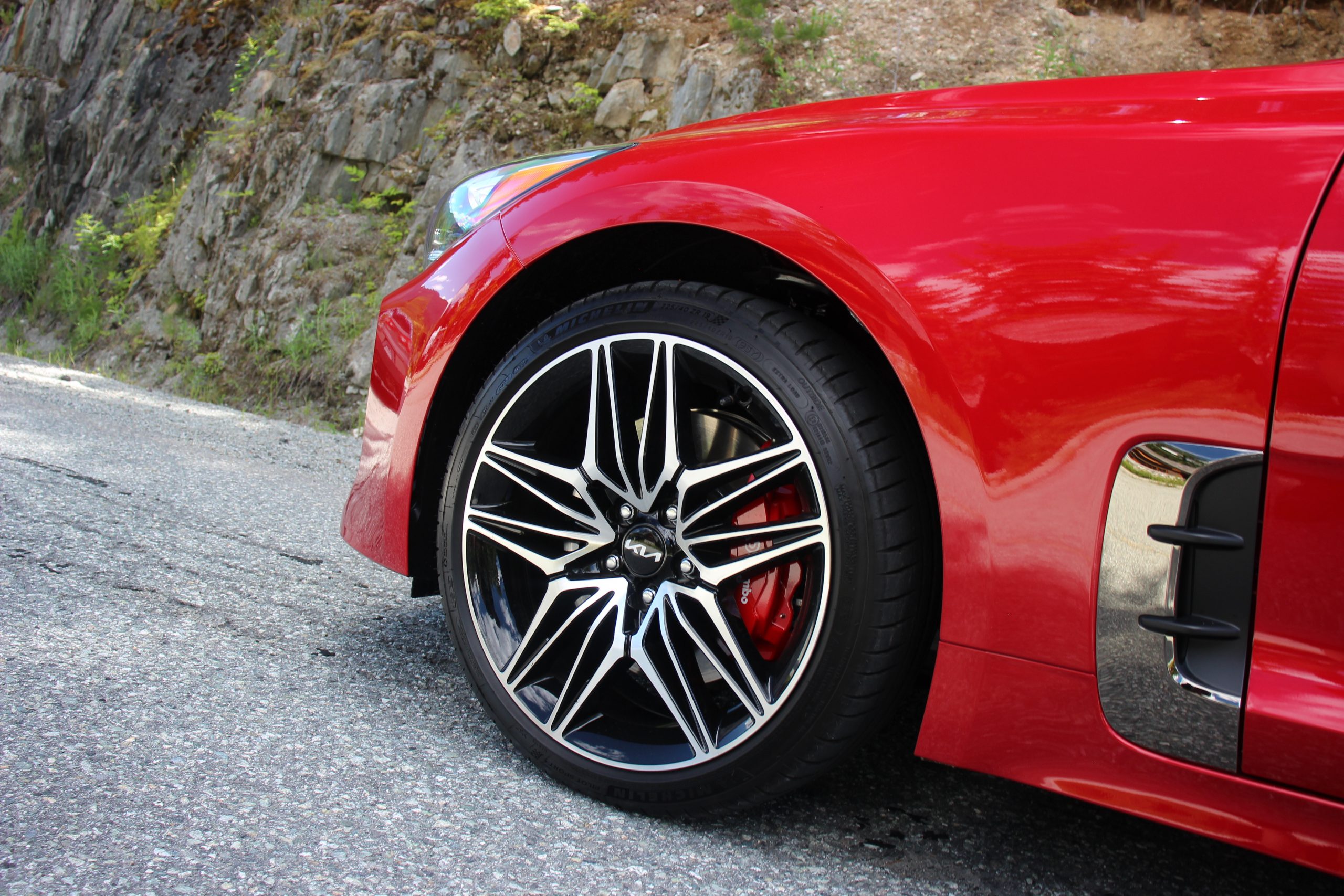 Plus, it’s just such a rare vehicle, both in the Kia line-up and even in the world of approachable performance cars. Especially in the world of Kia, though, this is a company that’s been all about econoboxes over the years and the fact that it is building something as unique as this is a nod to the fact that there’s life in big-engine, fun cars yet. 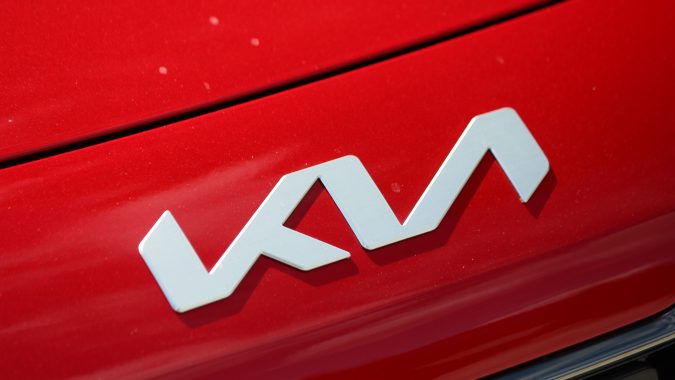 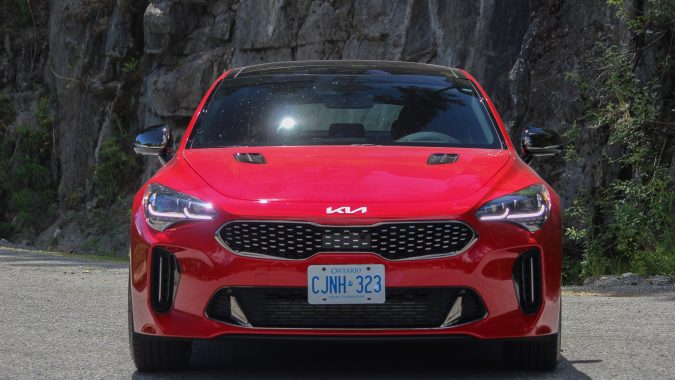 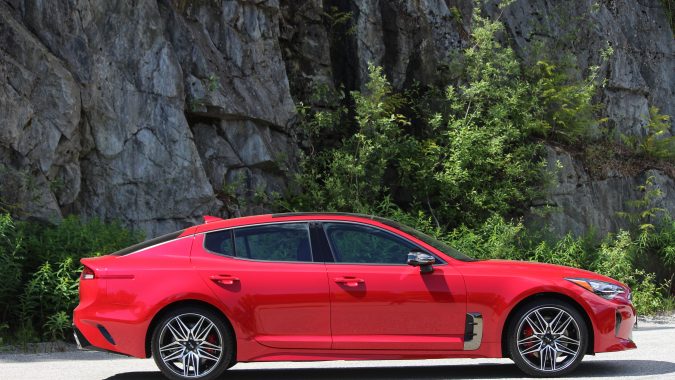 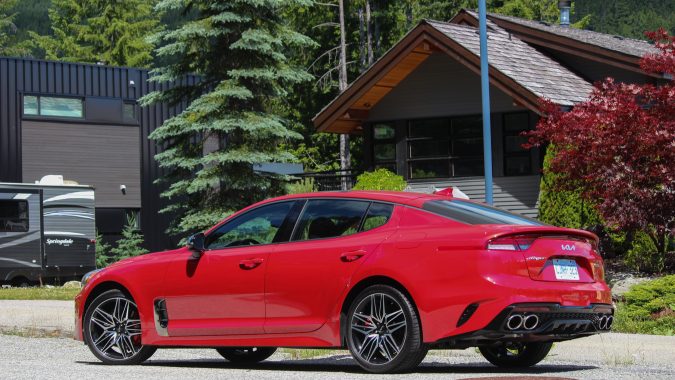 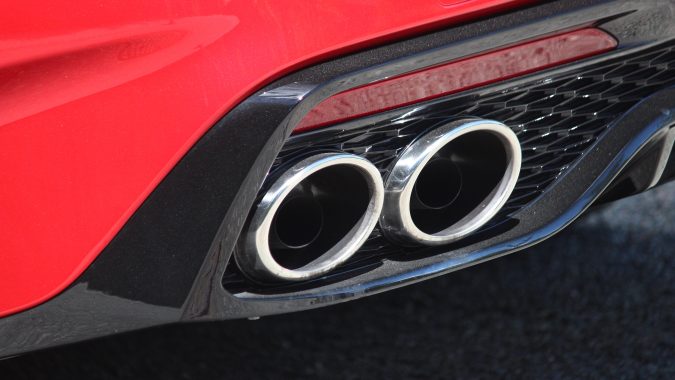 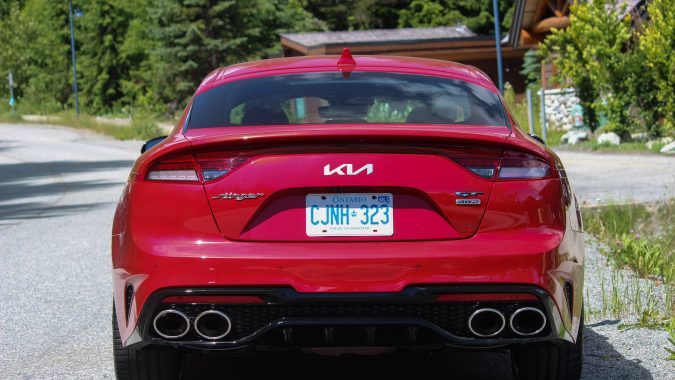 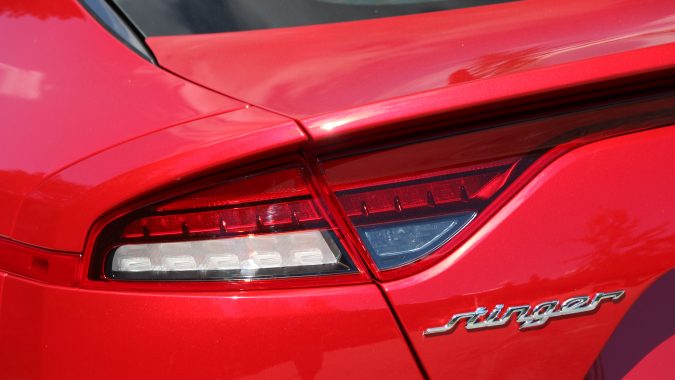 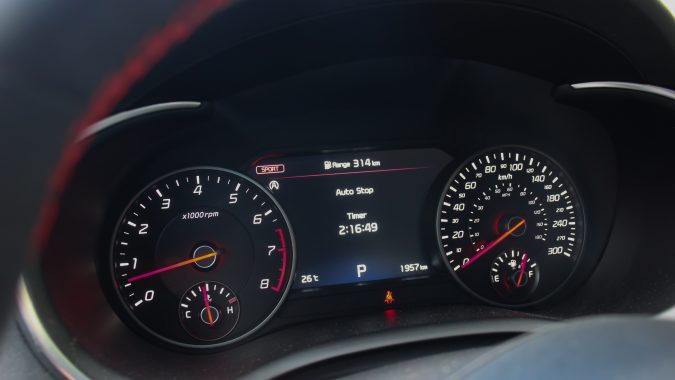 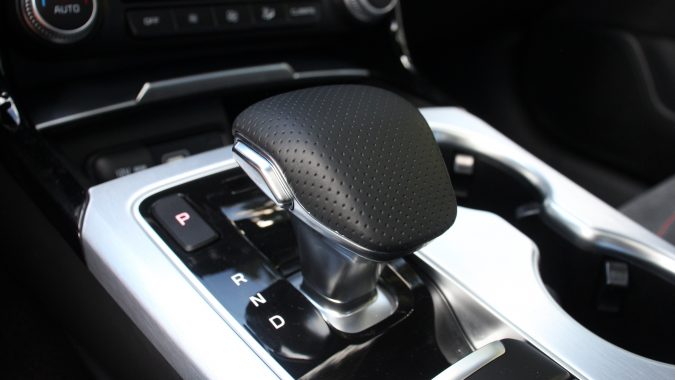 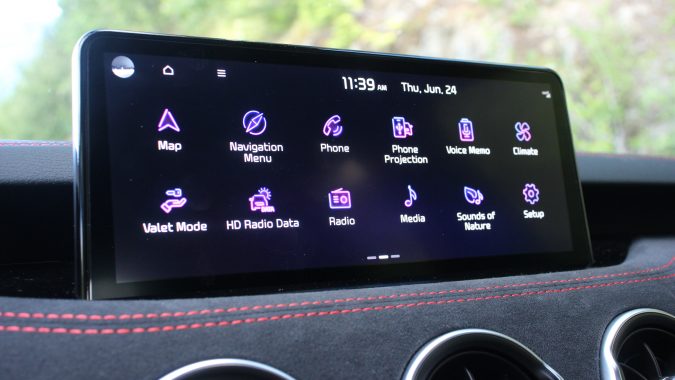 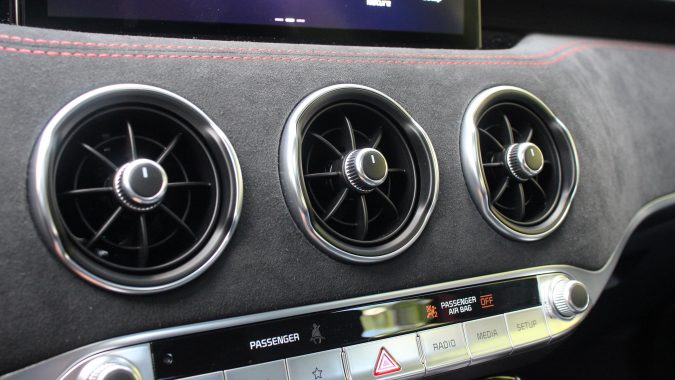 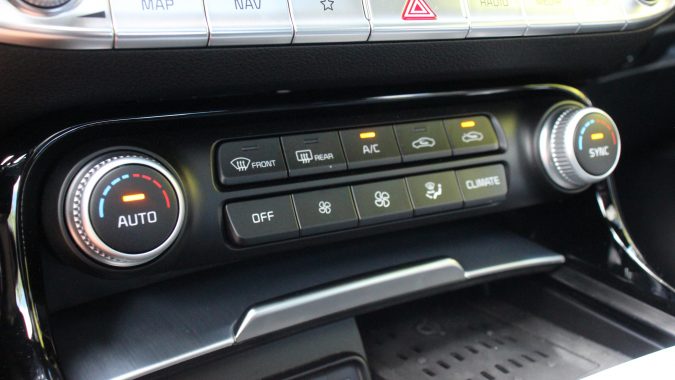 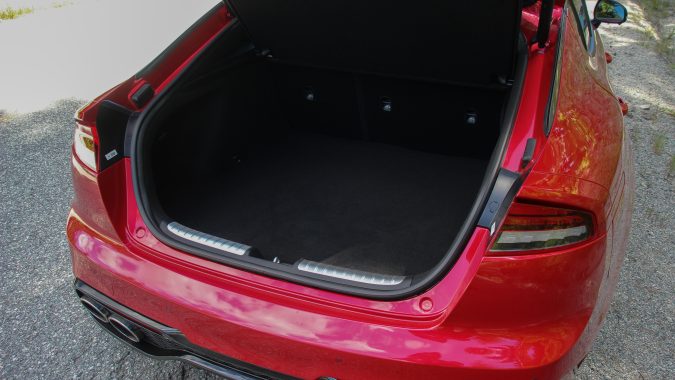