Memories of Niagara Falls while testing an Infiniti QX55

When I was a teen, we lived in Niagara Falls. I went to high school at Stamford Collegiate and I hated the place. I was there for seven years and never got past Grade 11. A vice-principal suggested I leave, since it was obvious, I was wasting everybody’s time, mine and theirs. I didn’t argue and got a job in newspapers. I’ve been in the pink since.

I didn’t go back there very often. Every time I would drive across the Skyway at St. Catharines, a dreadful sense of foreboding would come over me as I got near the Falls. One time, I took my degree (I went to university as a mature student) and my Big City press card and I wore my three-piece Conrad Black suit and I went to Stamford, but I couldn’t make myself go in. I had no idea what I was going to say or do if I got in there – I mean, my less-than-stellar high school career wasn’t their fault – but it didn’t matter because I turned around and drove back to Toronto.

As I get older, however, I find myself getting nostalgic about people and places and things and so a couple of weeks ago, when Infiniti made a bunch of 2022 QX55s available to journalists, I thought I’d take one out for a drive and where else was there to go but – ta-da – Niagara Falls?

I pronounce the Falls, Ni-a-ga-ra, as distinct from Niagra, just as I say To-ron-to instead of Trawno. This is because I once tried for a job on the local radio station in the Falls (I was 16 and had ambition to replace legendary disc jockey Dick Biondi on WKBW-AM in Buffalo.) The station manager gave me a newscast to read and I said “Trawno” and “Niagra,” so I flunked the test. I didn’t get the job but my enunciation of placenames has been perfect ever since.

I had my eye on a ruby red QX55 but my old pal Tim Dimopoulos, of 680 News, beat me to it. Most of those remaining were grey but – from my perspective, anyway – the comfort, the driver aids and the ride are more important than how any vehicle looks (although I really am partial to ones that are coloured deep red or navy blue. I mean, all the cars are pretty sleek these days so you’re not going to find an ugly duckling in there, in any event).

Having said that, the QX55 is a stylish crossover coupe. Very athletic looking. The oversized grille immediately catches your eye, as does the sloping roofline and the LED headlights, taillights and fog lights. Those assets, plus the 20-inch wheels, emphasize the QX55’s classiness. 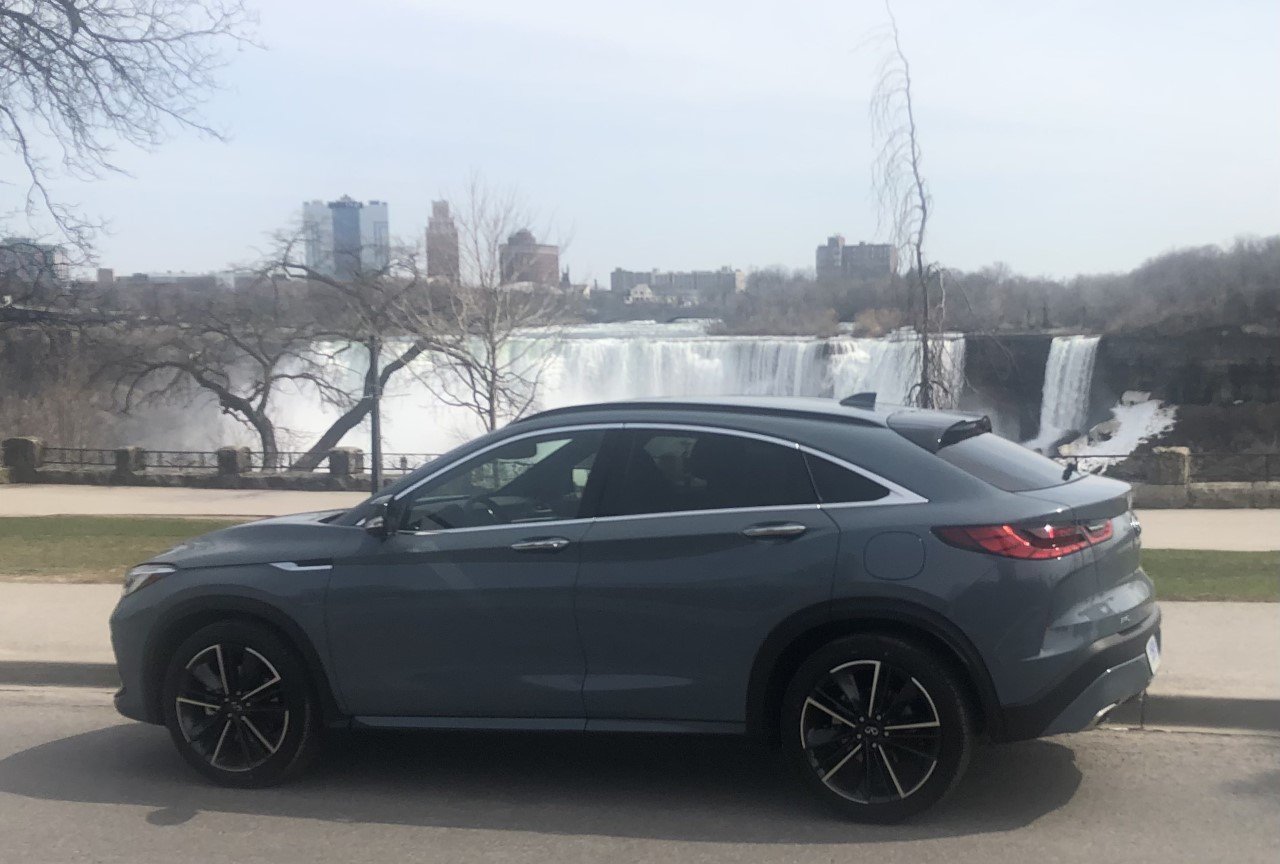 When I sat down in the driver’s seat, I immediately felt comfortable. The seats are heated/ventilated and built either for a long drive or the short runs. Legroom and headroom in the back seat are generous but the seats aren’t heated and that could be seen by some as a negative.

I used to ride my bike to a job as a caddy that I had at Oaklands Golf & Country Club on outer Stanley St. I did this for three or four years. One summer, maybe 1956 or ’57, at the corner of Portage and McLeod Rds., a guy set up an above-ground swimming pool surrounded by bridge chairs that were always occupied by tourists, it seemed. He had a seal that did tricks, after which he passed the hat. That was the beginning of what became MarineLand.

The QX55 has three screens, which means it takes time to learn how everything works. I only had the car for a day, so I didn’t get fancy. The cluster screen behind the steering wheel has the usual information (speedometer, tachometer, fuel gauge, oil temperature) and much, if not most, of the instrumentation is on the steering wheel. The two infotainment screens, one on top of the other, deliver tons of information – map (navigation), the time, direction, Sirius satellite radio and so-on. 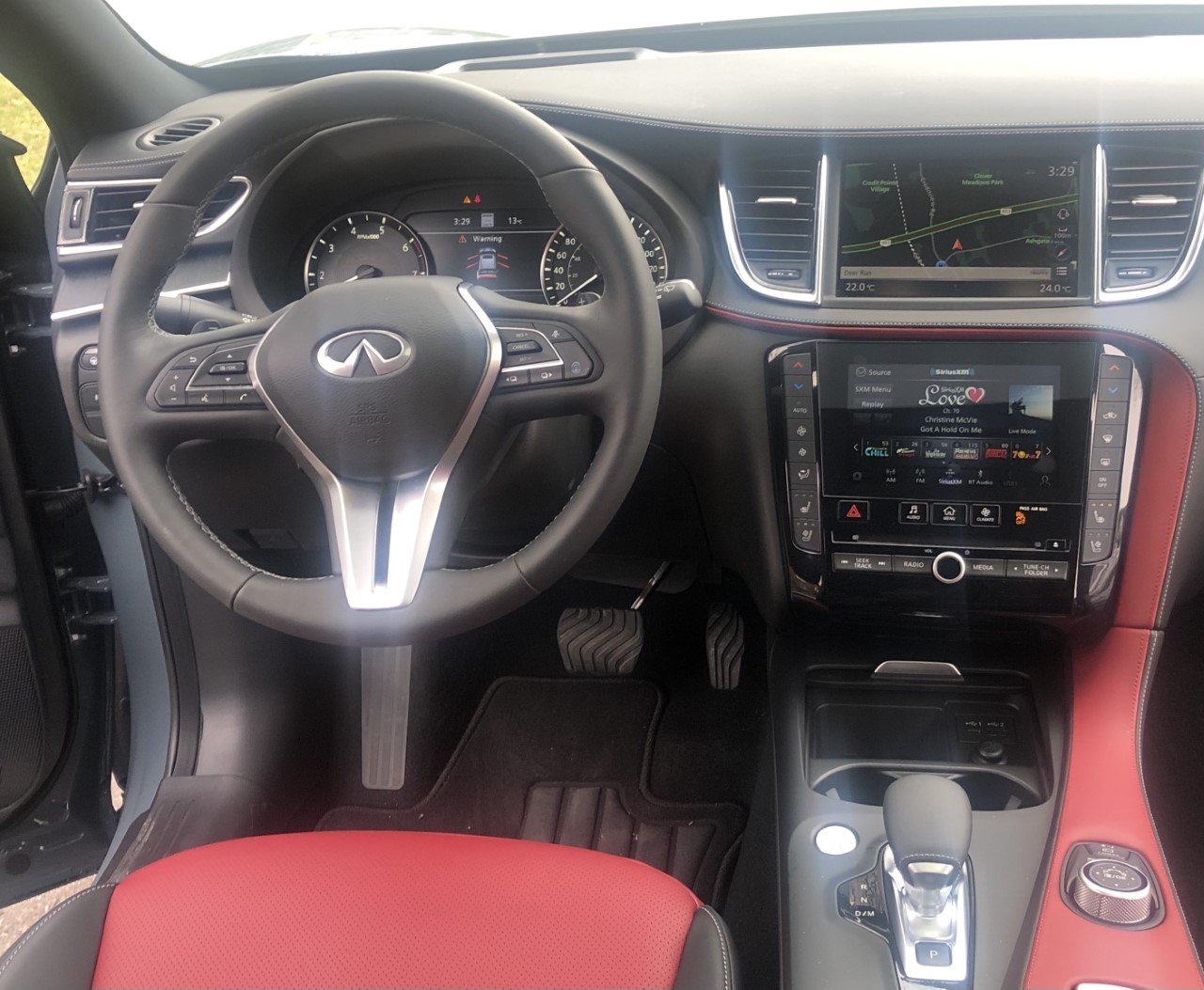 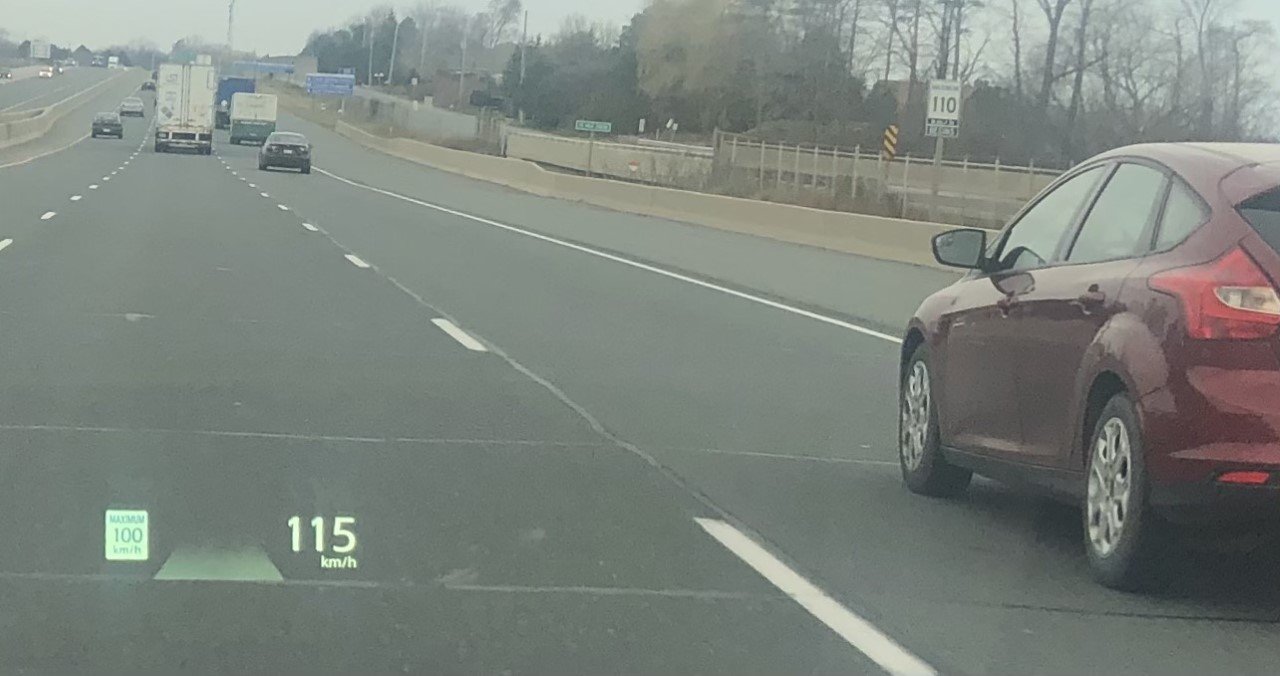 As I drove up the ramp to the QEW from Erin Mills Parkway in Mississauga, heading for Hamilton and Niagara, I felt the power of the 2.0-litre turbocharged four-cylinder engine (which has variable compression, incidentally – technology that gives you power and speed when you want or need it and fuel economy the rest of the time). As I approached the Ford plant where traffic from Hwy 403 blends into the QE (Hwy 406 at this point) a transport started moving left before I expected and the 268 horsepower and 280 lb-ft of torque managed by the continuously variable transmission (CVT) sure came in handy when I mashed the gas.

Now, I know this feature can be found on other vehicles, but I haven’t noticed it since I tested a Corvette a half-dozen years ago and it was a pleasure to realize it was operational on the Infiniti. And that’s the digital speed indicator reflected on the windshield. You don’t have to drop your eyes more than a smidgen to check on a) your speed and b) the posted limit. If I had my druthers, this feature would be on every vehicle out there.

The city of Niagara Falls was empty when I got there. Spooky. In my teen years, you couldn’t move in the place in summer. One time about 15 years ago I drove over and it was busy but not crowded. This time, there was nobody there. The Pandemic, you know. I drove the QX55 down Clifton Hill and along the Niagara River Parkway and there was barely another soul. I stopped across from the American Falls where they’d once built a “motel“ for the Marilyn Monroe movie Niagara and then continued past the Horseshoe Falls to the Dufferin Islands from where doomed daredevil William (Red) Hill had started his journey over the falls in an “inner-tube” barrel. Tens of thousands had turned up that day to watch a fellow commit suicide. Now, that sort of thing is against the law.

I felt completely safe the whole way over to Niagara Falls and back because the QX55 has ProPilot Assist on board, Nissan-Infiniti’s safety technology that helps you take care of the little things, like staying in your lane and, once set, maintain your speed with Intelligent Cruise Control. It has other functions, like stop and start in a traffic jam, but since I never encountered one of those, I never had the opportunity to test it.

I was just there on a day trip but if you’re going for a weekend, you will be interested in the cargo capacity. There is some 762 litres of cargo space, but this can be enlarged to 1,532 litres when you put down the rear seat.  And there’s a power liftgate to help you get things into the car. 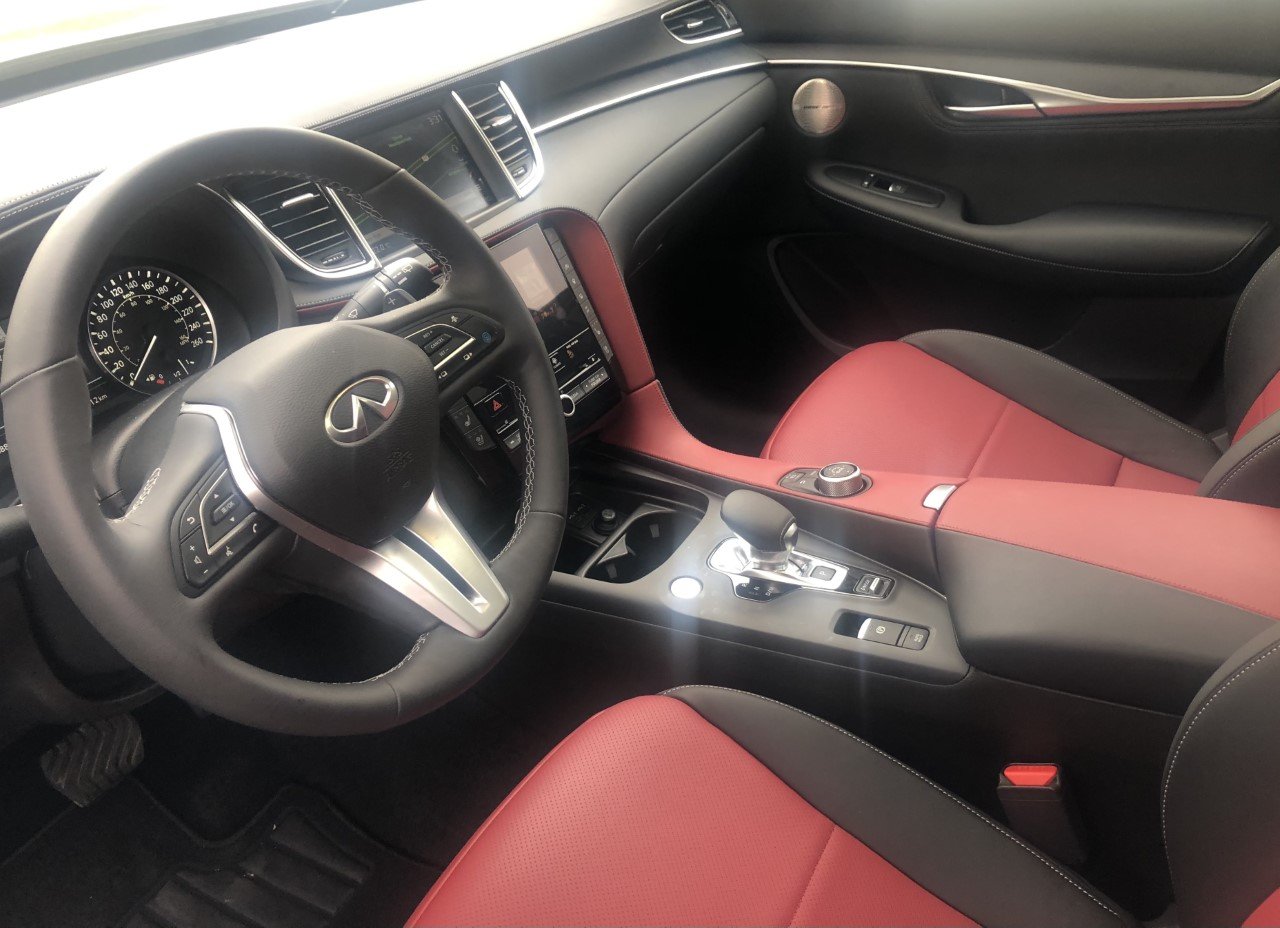 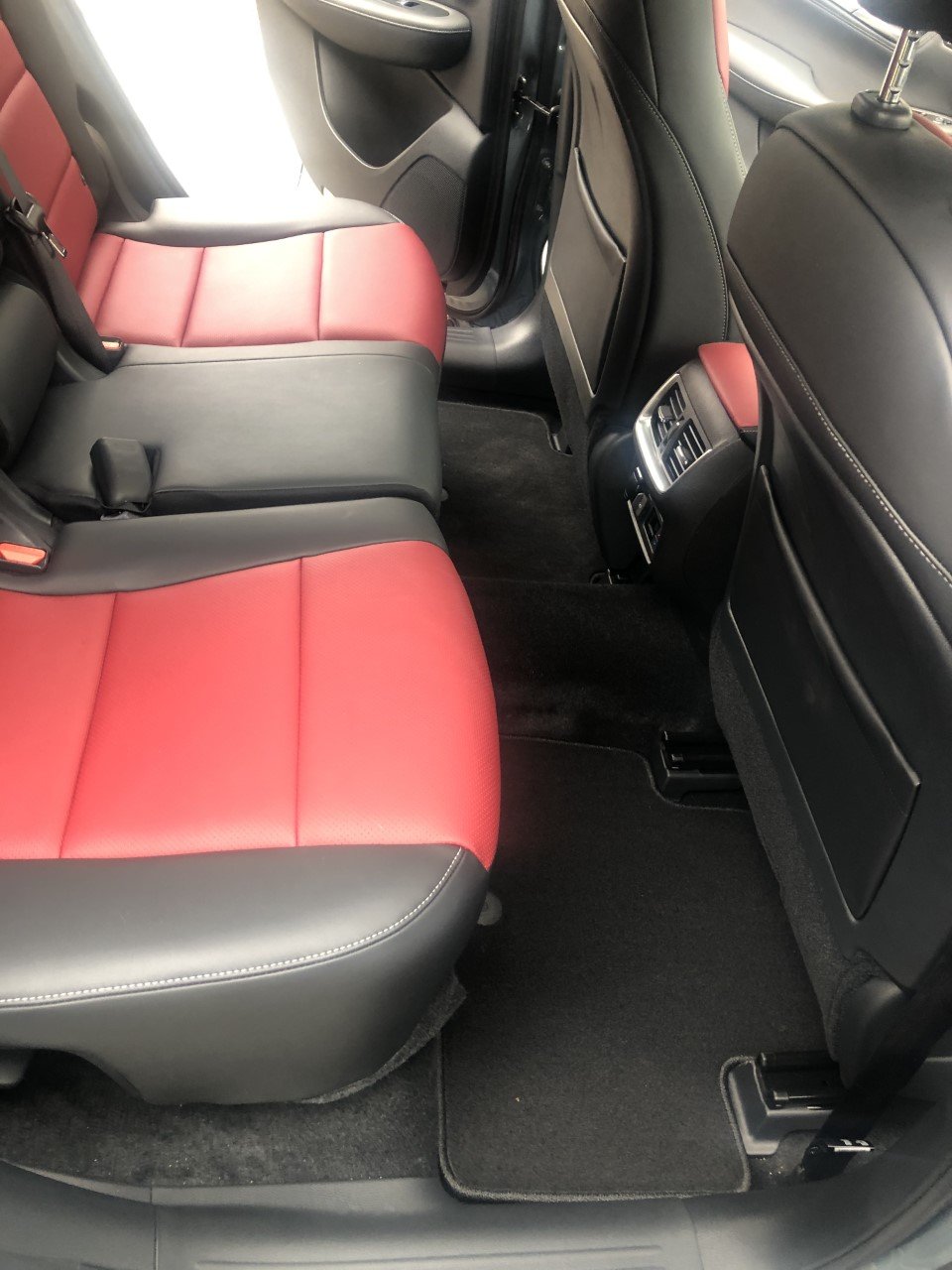 Border cities are one big town. People go back and forth several times a week, sometimes daily if they live on one side and work on the other. Intermarriage is common. My sister and I earned to swim at the “Y” in Niagara Falls, N.Y. So, it was strange to see the Rainbow Bridge empty of traffic: no cars on the bridge or lined up to get on. Back in my day, the drinking age in New York was 18. A lot of kids with phony ID, me included, who’d told their parents they were going to the high school dance, walked “over the river” on Friday nights to drink Miller High Life and eat spaghetti and meatballs at a restaurant on Ferrie Ave. (when there were restaurants, rather than the bombed-out crater it’s become).

The QX55 is being offered in three trims in Canada (and four driver modes, by the way – sport, economy, etc.). The trims all have the same engine and transmission and all-wheel-drive is standard.

The Luxe trim starts at $51,995; the Essential trim has leather seats, adaptive cruise control, the 16-speaker Bose sound system and comes in at $56,998. Then there is the Sensory trim, which has premium leather, genuine wood trim, the advanced adaptive cruise system and some other goodies, all going for $60,998 and up. That was the car I had and if there was a bump on the road I never felt it. The ride back to Toronto was as smooth and quiet as could be, thanks to the car’s suspension and the active noise cancellation.

A lot of people are going to like this car. I did.

We all turned 16 and got our licenses about the same time and Saturday afternoons we either borrowed our dad’s car or drove our own – a few were so lucky – and at about 4 p.m. we would go on the cruise, which made us feel grown-up. It would start at Lundy’s Lane, which became Ferry St., which became Victoria Ave., and you’d do that three or four times. Everybody recognized everybody else and waves of greeting would be exchanged, sometimes more than once, and we were young and the world would soon be ours. The last person I remember waving to all those years ago was a sweetheart, Marianne Slemmon, who two years after that was dead of carbon monoxide poisoning. Now that I think about it, maybe that’s why I don’t like going back there. Something tells me we might have had a future.