Adventure is an easy sell these days. Look no further than the boom in RV and boat sales, camp sites booked months in advance, and the growing popularity of overlanding.

Luckily, Canada has a whole lot of backyard to meet your adventure needs and all you require to get out there is a sturdy vehicle and an adventurous spirit. Don’t forget to pack your selfie stick, toque, and scruffy beard.

Car companies know this and they’ve been quick to capitalize on the trend, bringing back two-door off-roaders, rugged wagons, and mid-size pickups to help take you as deep into the backcountry as you dare go.

Hyundai, not one to sit idly by, has also put its hat in the ring but their new entry, the Santa Cruz,  does things quite differently. For one, it’s not a typical pickup and it’s not an off-roader or even a crossover. At first glance, it’s a Tucson in the front and something else entirely in the back. Hyundai calls it a Sports Adventue Vehicle (SAV) not to be confused with BMW’s Sports Activity Vehicles (also SAV).

I got many quizzical looks from passersby and the only cars I’ve driven this year that have received more attention were a Lamborghini and the new M4. 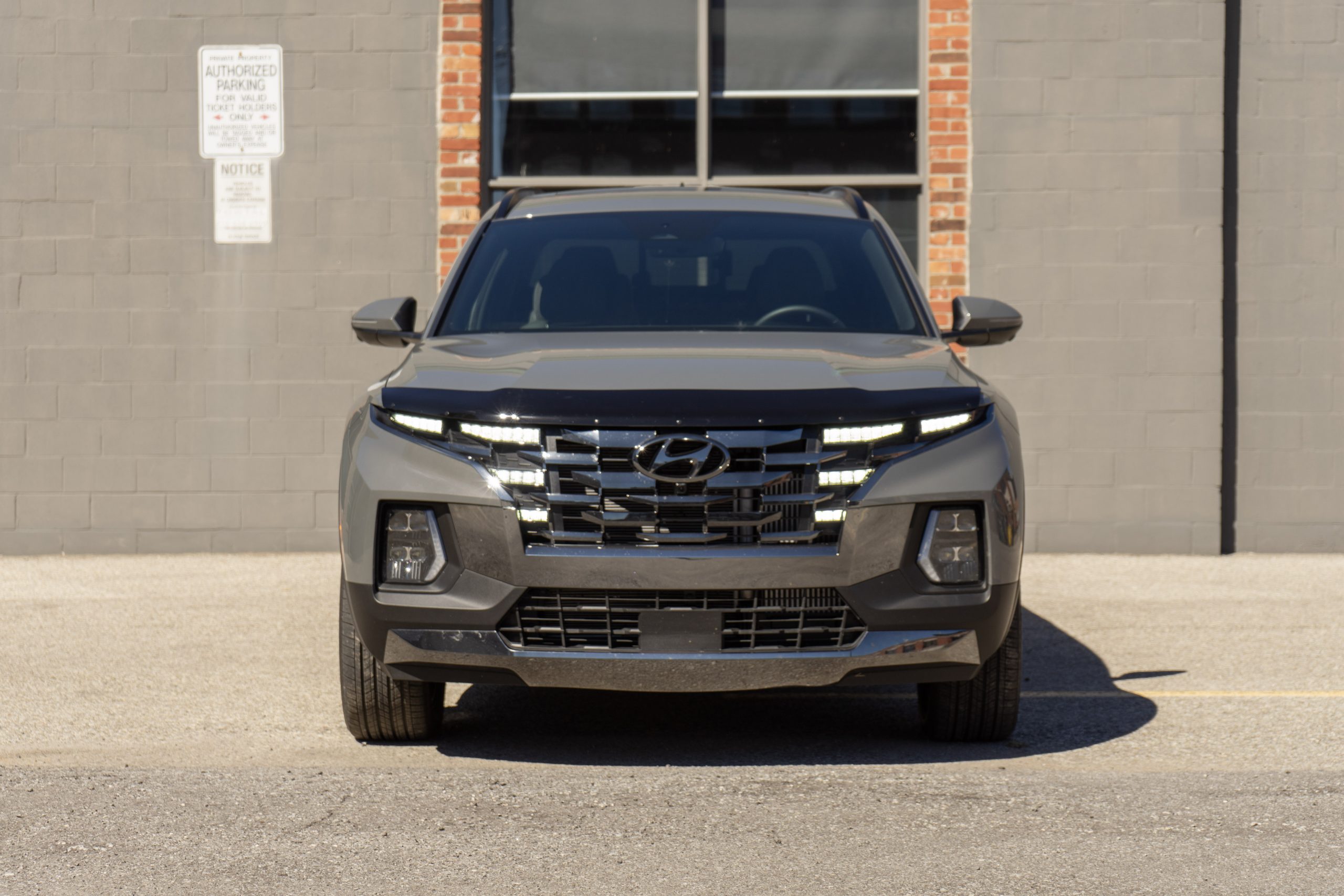 If you like the front end of the new Tucson with its running lights integrated into its multi-faceted grille you’ll probably like this too. Based on the same platform that underpins the redesigned 2022 Hyundai Tucson, the Santa Cruz’s resemblance to Hyundai’s new crossover goes beyond the front-end styling. Compared to the Tucson, the Santa Cruz rides higher and has a tougher appearance. It isn’t a hard-core off-roader and isn’t trying to be, but cottage trails and dirt roads should pose this no problem at all.

It has Subaru Baja vibes but its formula more closely resembles that of the larger Honda Ridgeline. Like the Ridgeline the Santa Cruz can tow up to 5000 lbs and has a maximum payload of 1609 lbs. While that’s less than you can tow with a Ranger or Frontier, it’s still respectable.

The 2.5-L turbocharged 4-cylinder is the only available powerplant and it produces 281 hp and 311 lb-ft of torque, the latter figure available at just 1700 rpm. It’s mated to a quick-shifting 8-speed dual-clutch transmission, making for a very un-pickup-like powertrain. 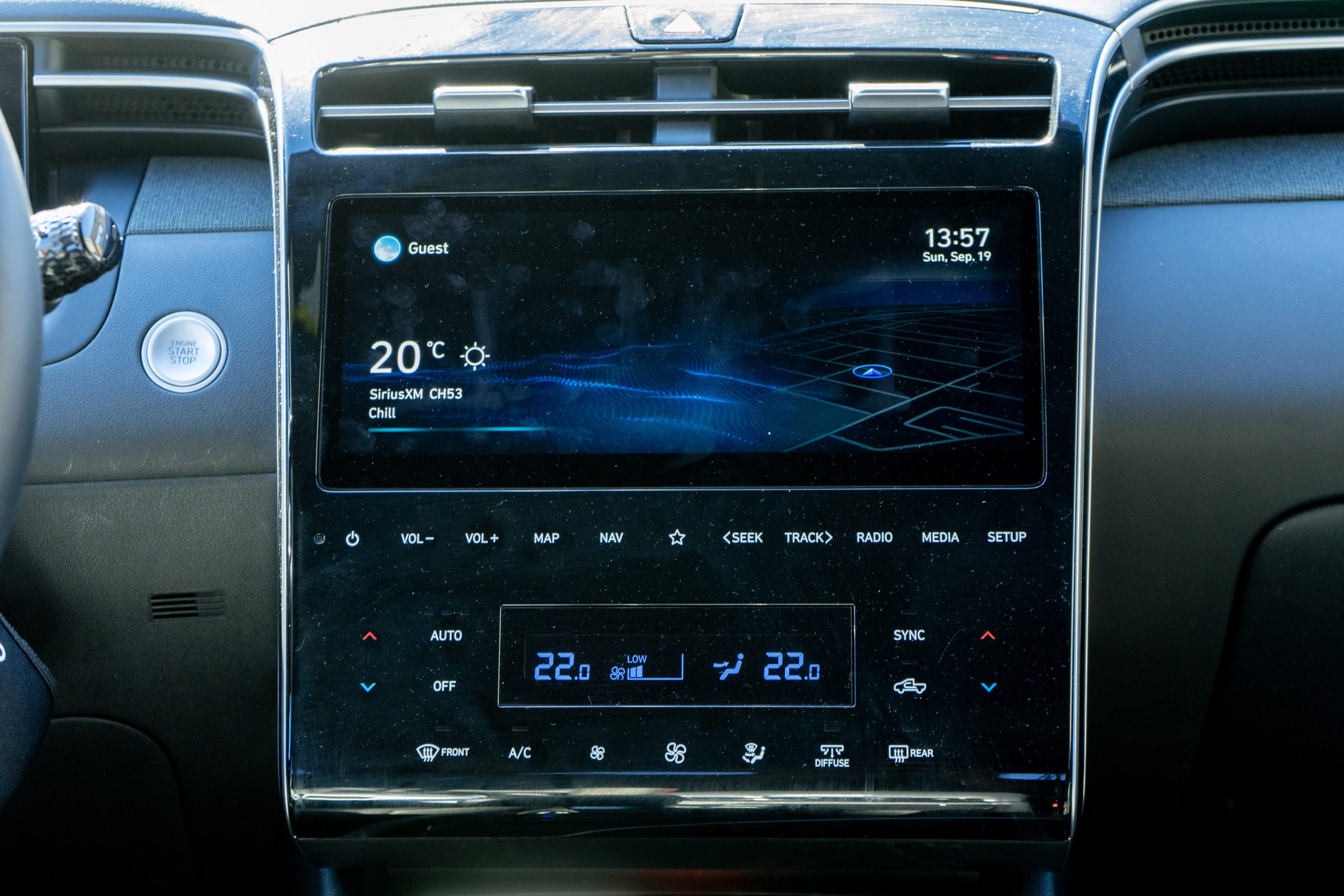 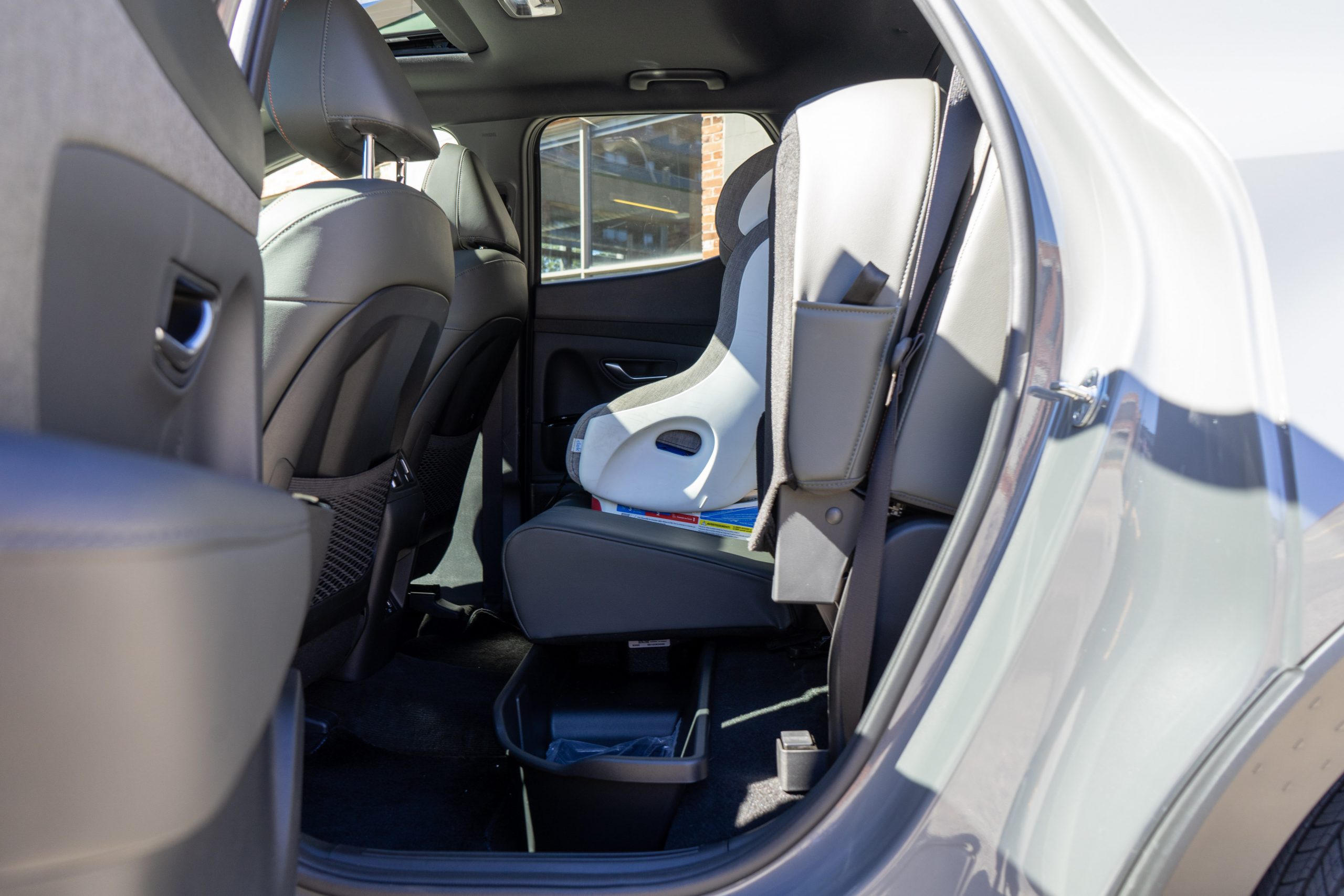 On the inside, the Santa Cruz is identical to the Tucson and isn’t nearly as exciting as the exterior styling. It’s a clean and clutter-free experience, material quality is excellent, and it’s all screwed together tightly, but the capacitive touch centre stack is frustrating to use on the move, and the absence of a basic volume knob means you’ll be using the steering wheel buttons more often than not. Worse, after a few days, that glossy black panel was absolutely covered in dust and fingerprints, and that’s not a good look in a new car.

On the other hand, the front seats are comfortable, the driving position is very good, and the view out is excellent. The rear seats aren’t as upright as some of the others in this class and they flip up to reveal handy storage bins. 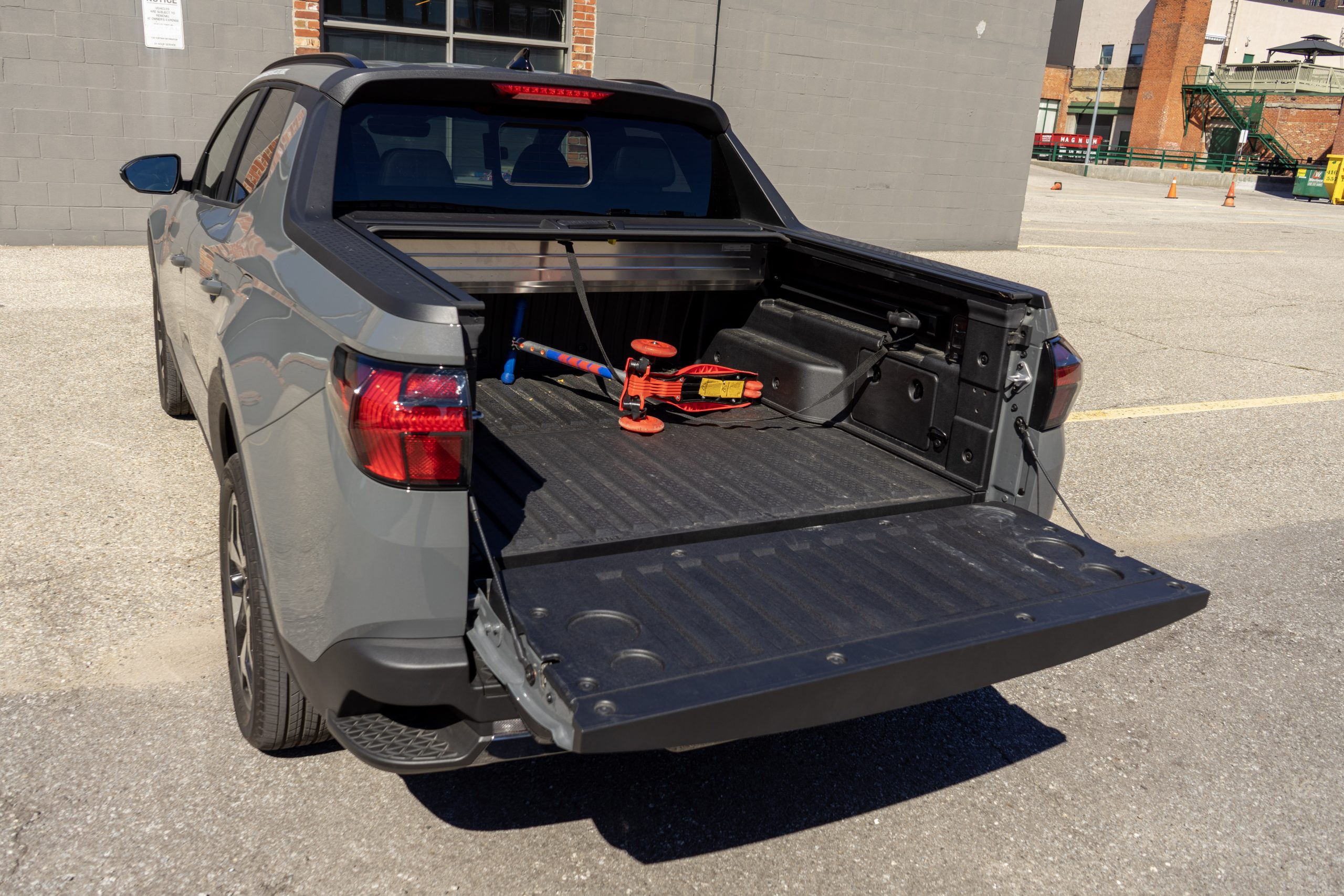 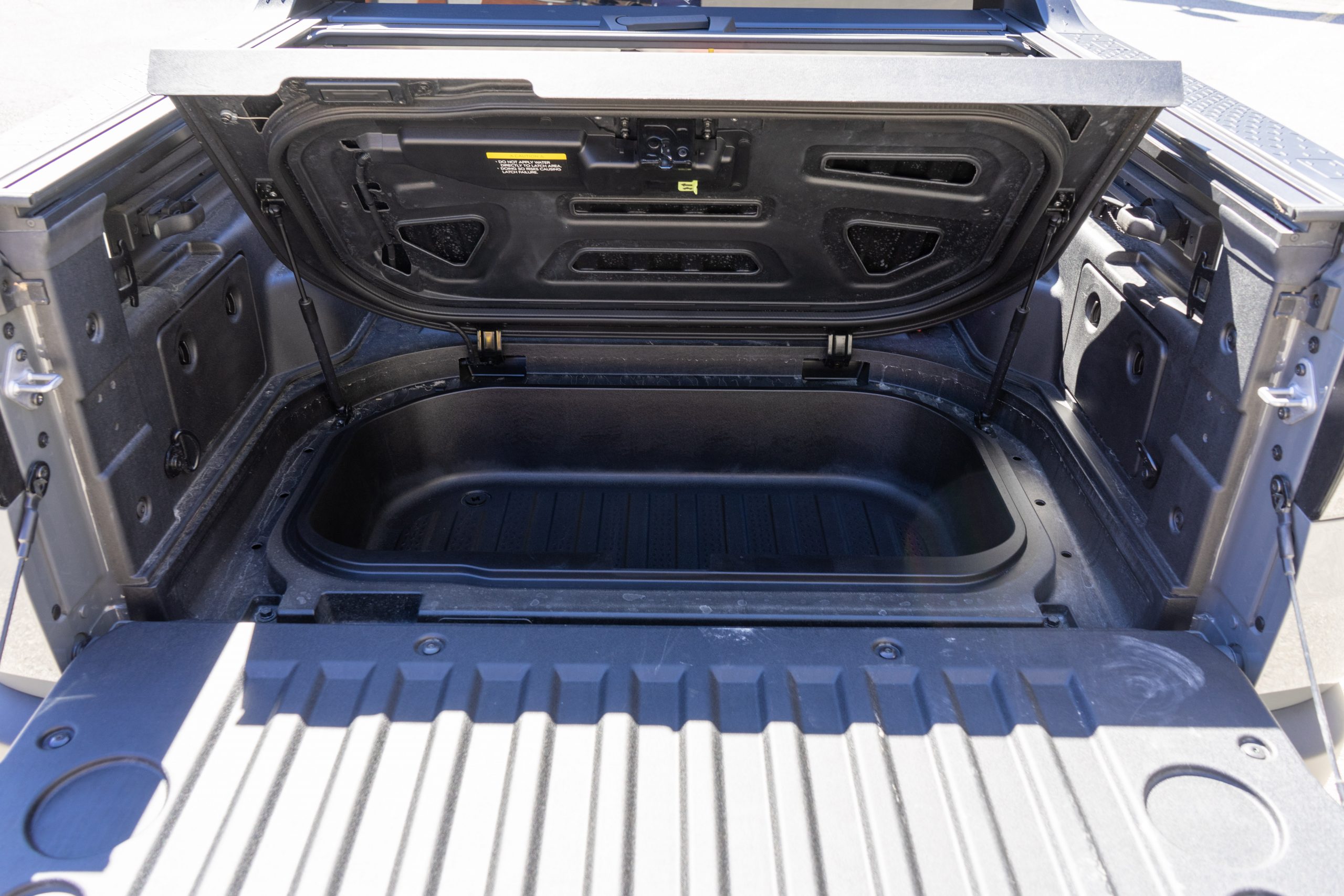 There’s one bed length and at just 4.3 feet it’s one of the smaller options out there but, really, that’s the point of this truck. All others in the class, like the Ranger, Tacoma, and Frontier offer bigger beds but have a much larger overall footprint. What the bed lacks in length, it makes up for in versatility and some nifty features like a built-in lockable tonneau cover, in-bed lighting for loading in dark conditions, and a lockable under bed storage well complete with a drain plug so you can even use it as a cooler or a place to store muddy items.

There are also integrated bumper steps that fit my size 11 boots, a 115-volt household-style power outlet, adjustable tie-downs, and a two-position tailgate for securing longer items.

Some might say that this isn’t a real pickup truck but it absolutely is. Most people don’t need those gargantuan half-tons that spend most of their lives clogging Costco parking lots. For those that need the versatility of a truck without its own postal code the Santa Cruz is an excellent proposition. It makes you wonder why we don’t have more small trucks like these around. 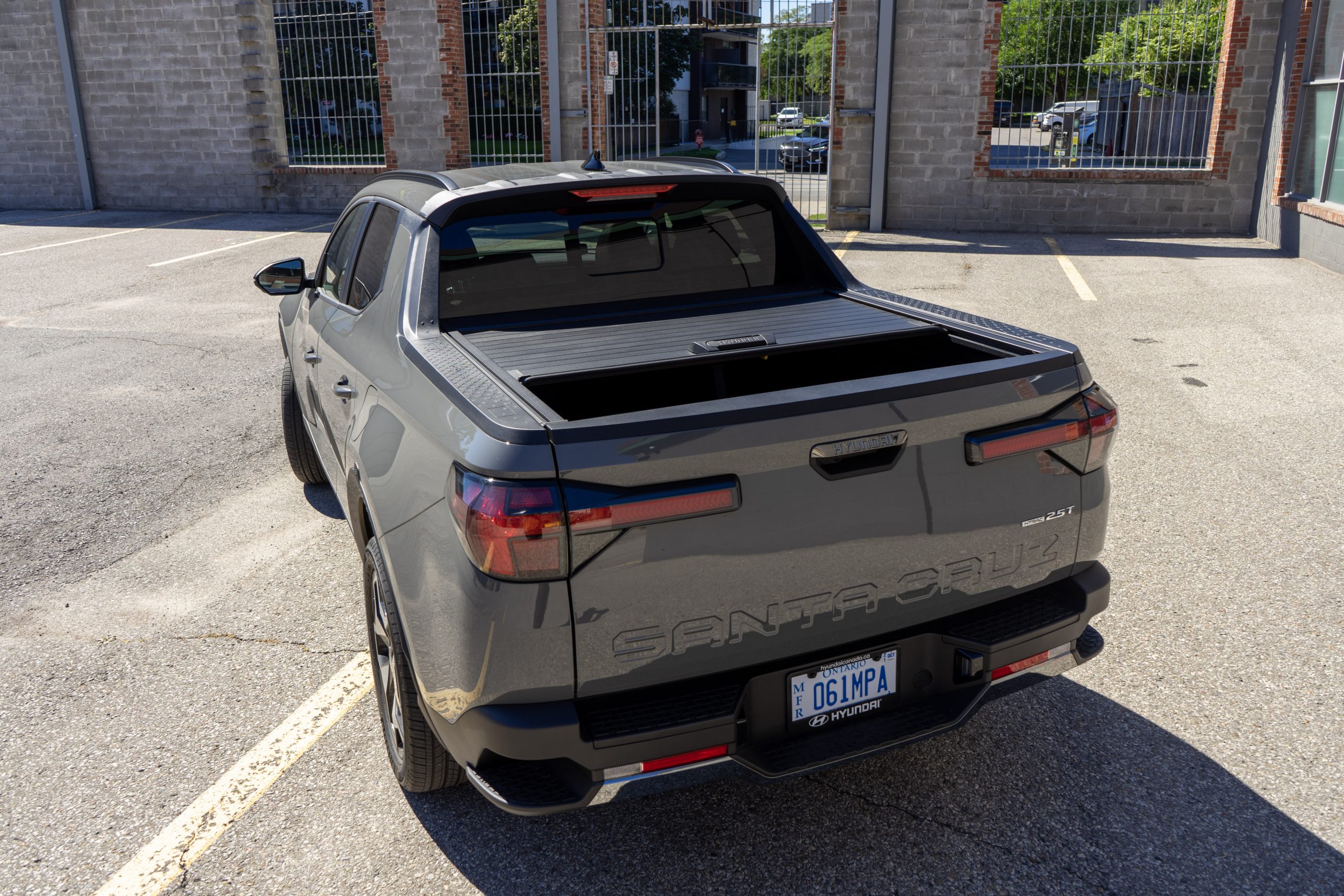 The Santa Cruz is the least intimidating pickup I’ve ever driven and a lot of fun to drive. On narrow downtown streets it feels light and agile with quick steering and a tidy turning radius. The powertrain is energetic and provides ample torque, and the 8-speed dual-clutch cracks off rapid shifts but exhibits a bit of clumsiness at lower speeds. You quickly forget about the bed in the back and it just feels like a well-sorted crossover with surprisingly sporty driving dynamics, more so than its Tucson counterpart.

Another benefit of being based on a modern crossover is that the Santa Cruz is equipped with the latest in safety tech including forward collision avoidance with pedestrian detection, lane-keeping assist, and driver attention warning. Springing for the top “Ultimate” trim level, gets you a surround-view monitor, safe exit assist, blind-spot view monitor, highway drive assist, and rear cross-traffic collision avoidance assist. It also upgrades you to a 10-inch fully digital driver display, a 10-inch centre screen with built-in navigation, ventilated seats, and 20-inch wheels. 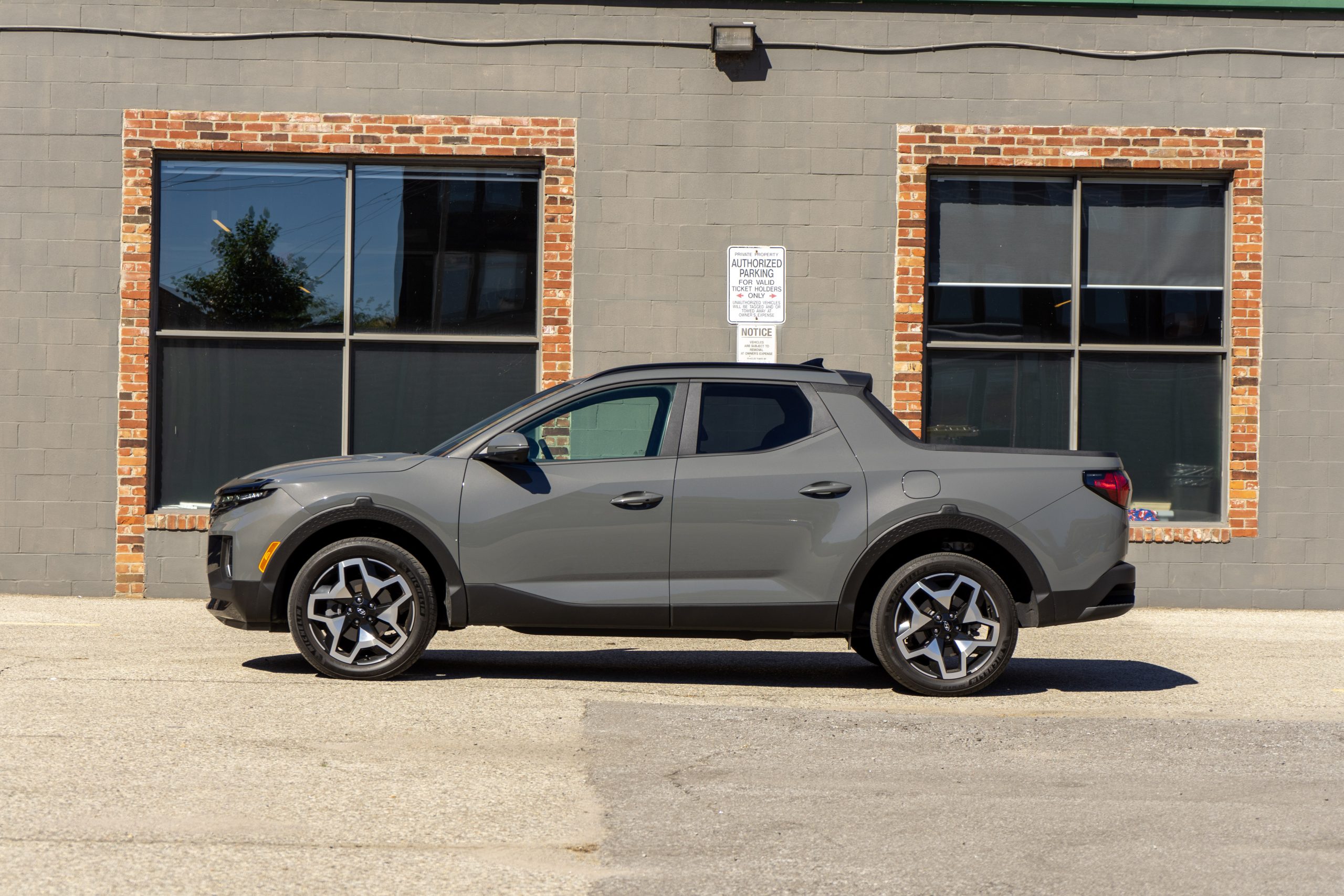 The Santa Cruz was one of the biggest surprises of the year for me and I didn’t expect to like it so much. At first glance, it’s not exactly clear what it is, but after living with it for a week, its usefulness completely won me over.

This is a truck for those that might have never considered one otherwise. It offers the versatility of an open bed in a package that’s easy to drive and easy to park. You’ll be the king of grocery runs and the sultan of flat-pack furniture hauls. And if adventure calls or even if it doesn’t, you’ll be ready. 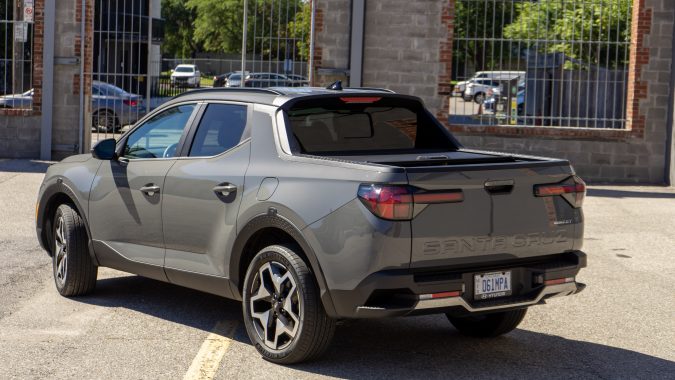 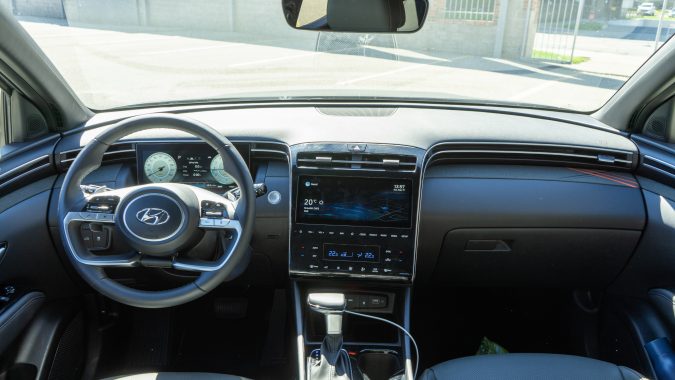 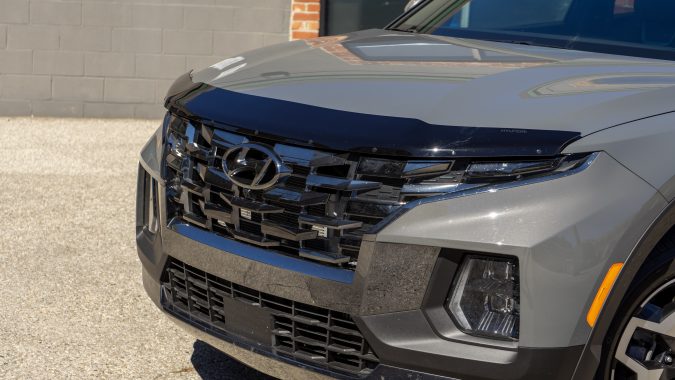 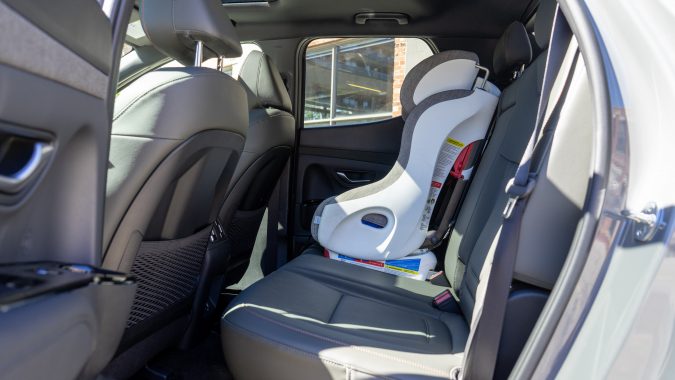 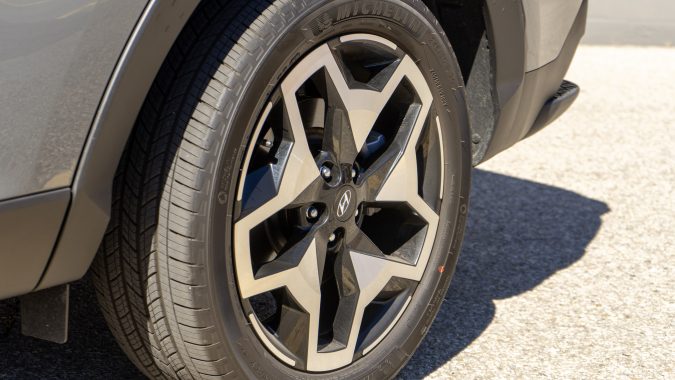 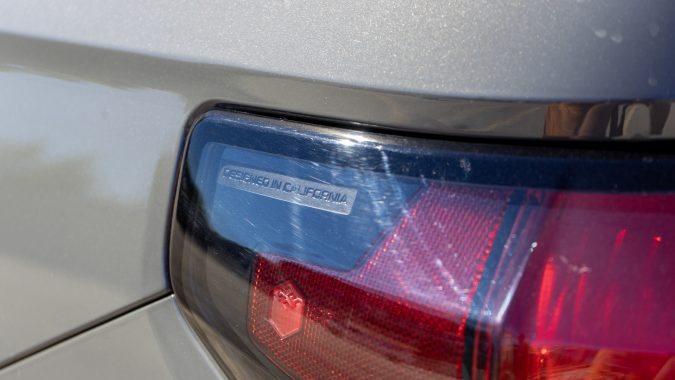 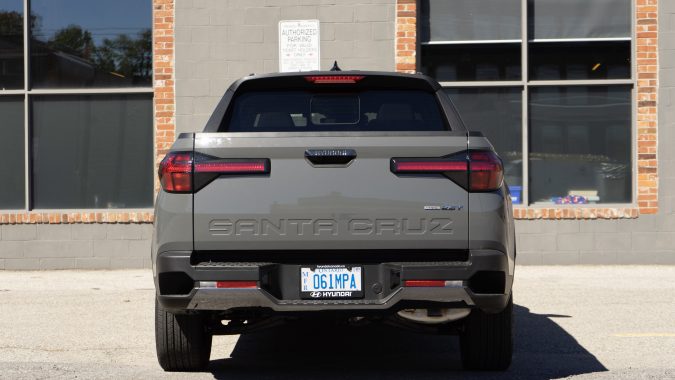 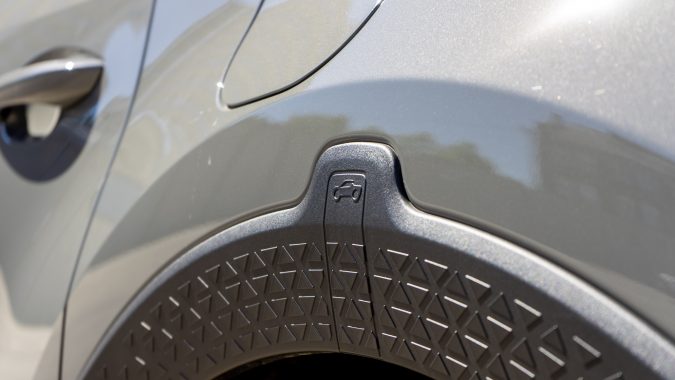 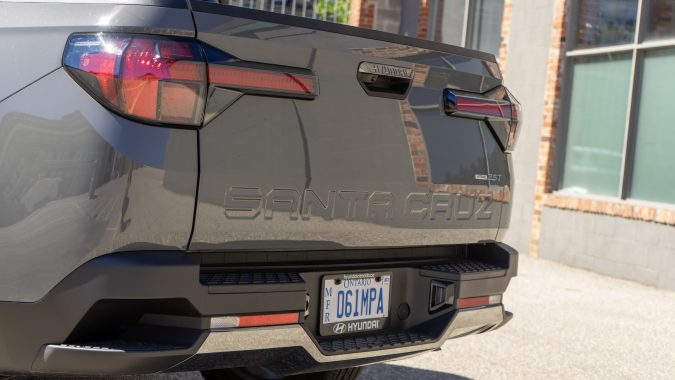 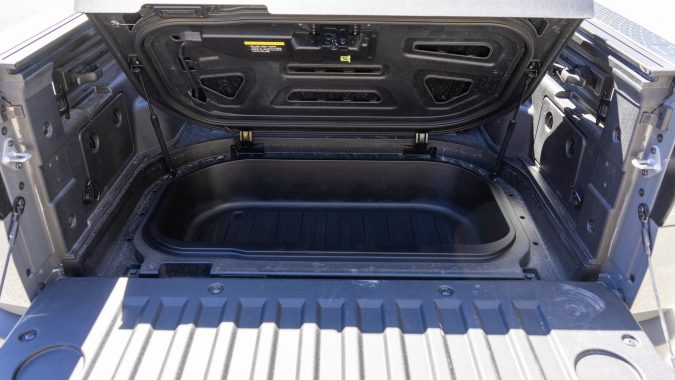 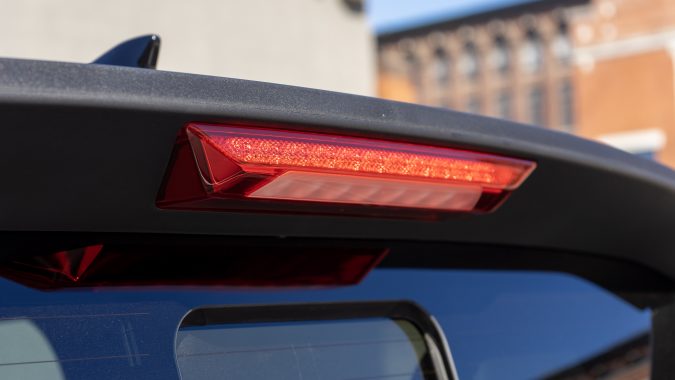