As is the case with all carmakers these days, Volvo’s sales and profits are being driven by SUVs, but still kicking in its lineup (for now) are two sedans, the flagship S90 and the mid-size S60.

The focus here is on the latter, now in its third generation which, unlike other sedans, is still available in several grades, both gas-powered and electrified. While the S60 isn’t a big seller in North America, unlike some other sedans I’ve written about in the past year, its sales haven’t completely cratered over the past half-decade or so. True, 2020 witnessed a rather sharp decline in U.S sales (- 4,461), due in part to the pandemic, but last year was still better than 2018, and the same was true in Canada, despite a sales dip (- 629).

To level-set, current S60 production began in late 2018 for the 2019 model year and, for the first time in its history, Volvo moved it out of Europe (Belgium and Sweden) to its new facility in Ridgeville, South Carolina, a sprawling 2.3-millon square foot plant located about 45 minutes northwest of Charleston. Of note, the plant has a 150,000-unit annual capacity and will begin building the XC90 flagship SUV in 2022. 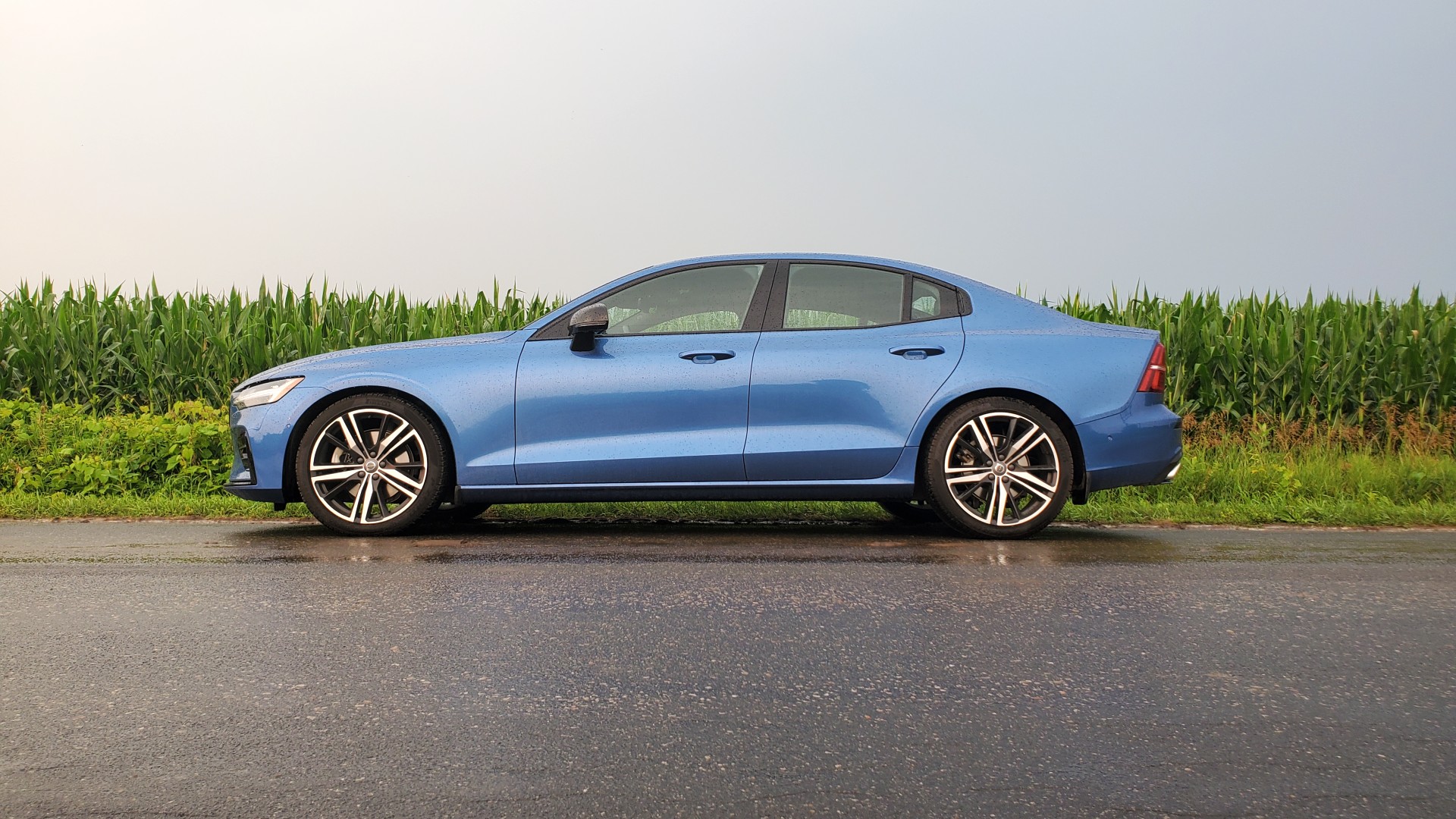 Back to the S60. It, like most Volvo products, is built on the company’s modular Scalable Product Architecture (SPA) platform and is powered by its Drive-E powertrain, which consists of a 2.0-litre supercharged and turbocharged four-cylinder engine, eight-speed automatic transmission and standard all-wheel drive.

For Canada, the S60 is divided into two product lines: gas-powered and plug-in hybrid (PHEV). On the gas side, three models are available: Momentum, R-Design and Inscription. On the PHEV side (Recharge, in Volvo-speak), it’s R-Design and Polestar Engineered. I’ve reviewed the latter in in both S60 and V60 formats for Wheels, so to learn more about those, go here. 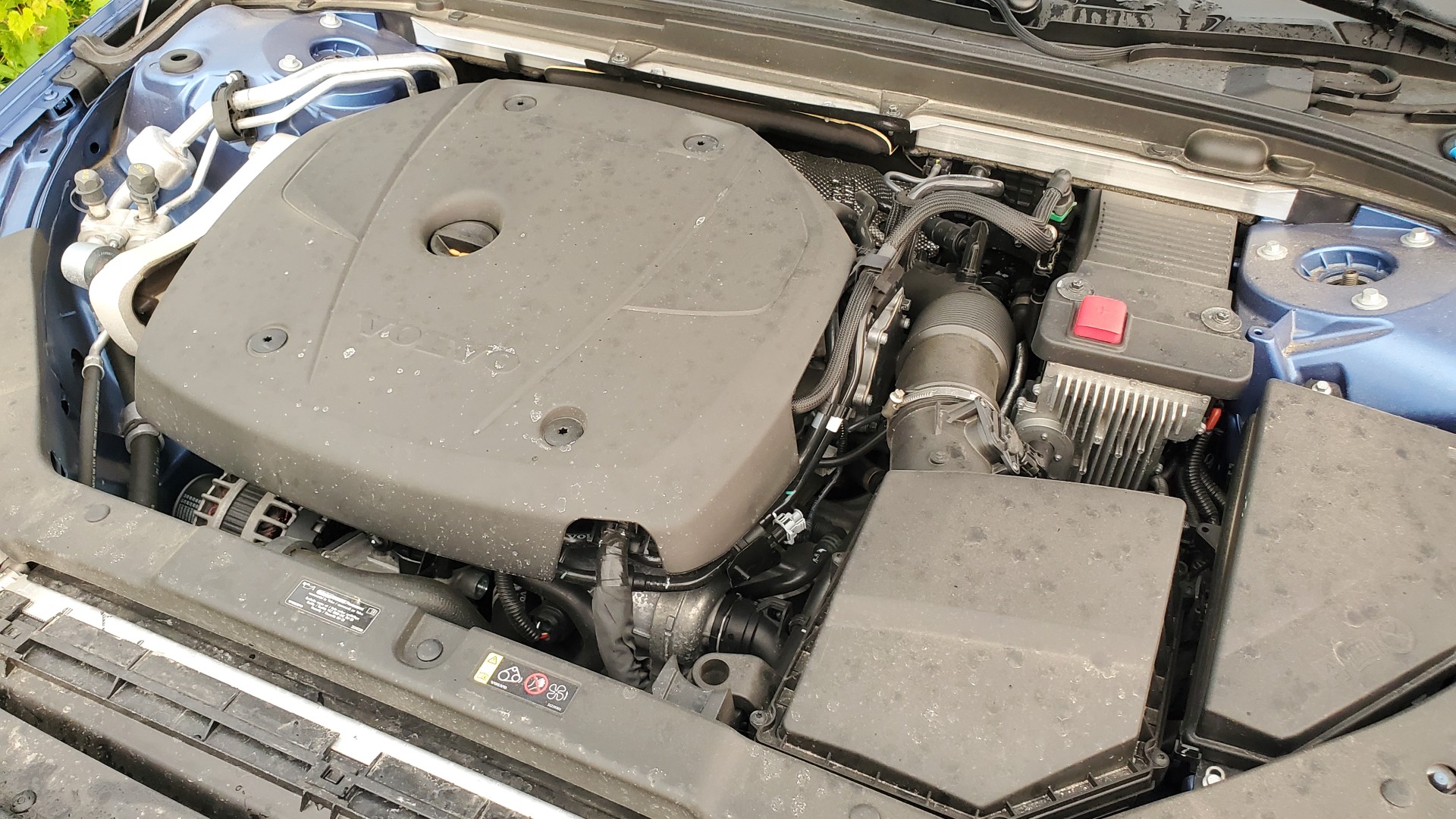 For the purposes of this review, Volvo Cars Canada recently set me up with a Bursting Blue Metallic ($900 paint charge) R-Design tester with a Slate Nappa leather / Graphite Textile / Vinyl in Charcoal interior.

My press unit is a T5 R-Design copy, which means its version of Drive-E produces 250 horsepower and 258 lb-ft. of torque. As mentioned, the only gearbox available is an eight-speed Geartronic automatic which is paired with standard all-wheel drive. 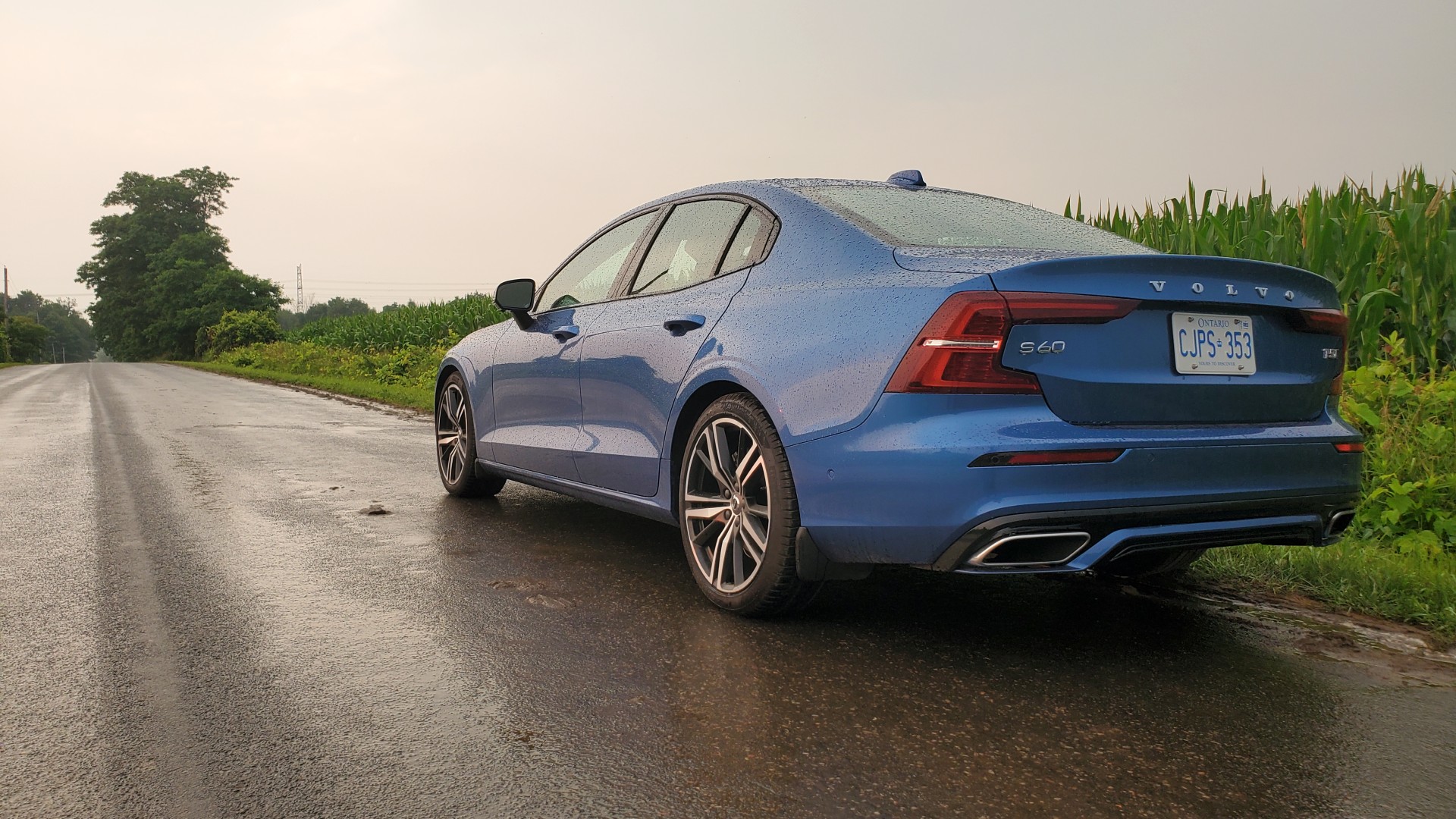 As for goodies, this presser is loaded with extras. I won’t list them all but among the notable add-ons are the Climate Package ($1,000) which adds heated windscreen washers, heated steering wheel and heated rear seats. Also present is the Advanced Package ($2,450), which comes with a head-up display, 360-degree camera and a wireless smartphone charger, among other items. My test is also outfitted with an upgraded Bowers & Wilkins Premium Sound System ($3,750) and 19-inch 5-Triple Spoke Matte Black Diamond-cut alloy wheels ($1,000).

As mentioned, I’ve reviewed other versions of the S60 and V60, so I won’t linger too much on this S60’s looks as nothing has changed since I drove those cars and my impressions remain the same. Bottom line, the S60 is a handsome sedan, especially in such a gorgeous purplish-blue tint and with bigger 19-inch wheels (18-inchers are standard). Its styling is quite geometric in a way that isn’t entirely dissimilar to its German rivals, but details like the Iron Mark grille and Thor’s Hammer LED lighting signature and bracket-style LED taillights create just enough separation for the S60 to stand apart.

On the inside, and I believe I said this about both the S60 and V60 I reviewed previously, I’m of two minds. I really like the seating, driving position and trim materials, but I really don’t like the Sensus infotainment display that feels quite dated in 2021. 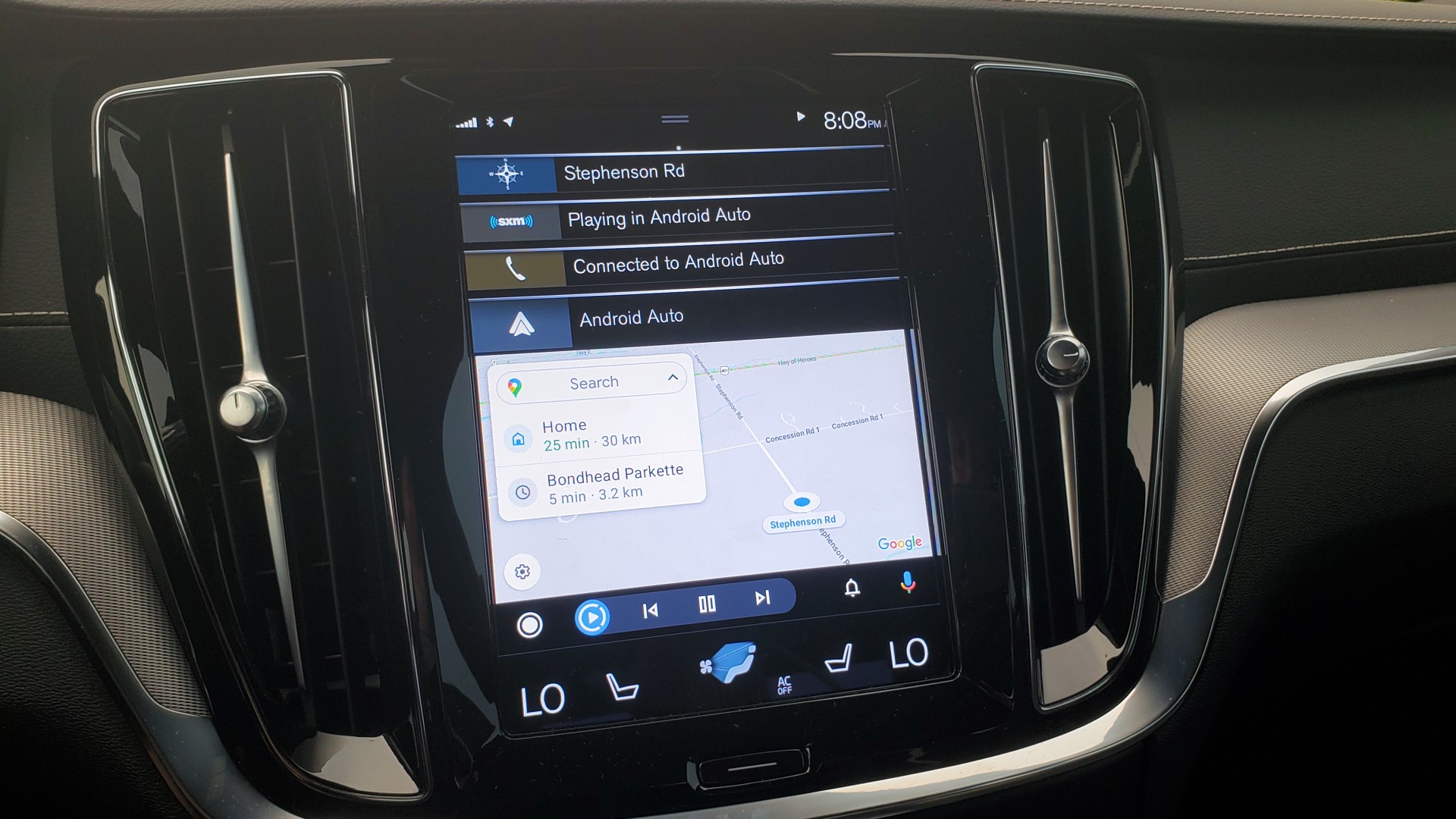 Yes, I know Volvo has a new multimedia system coming thanks to its partnership with Google, but as of this writing specific rollout details haven’t been announced, so the Sensus will live on for a while longer in the S60 which is disappointing. In an era when its rivals are producing horizontal displays that gobble up vast areas of the dashboard, the nine-inch vertical Sensus is archaic, and its Apple CarPlay / Android Auto rendering takes up a laughably small amount of useable screen space.

On top of that, its menus are fussy and distracting to use, the embedded map graphics look old and lack detail and the system’s response time can lag. Long story short, this system needs a makeover, and once that makeover eventually arrives, the S60 won’t have any significant interior weaknesses, in my view. Its seating, comfort, interior space, trim materials and ergonomics all rate highly to these eyes. 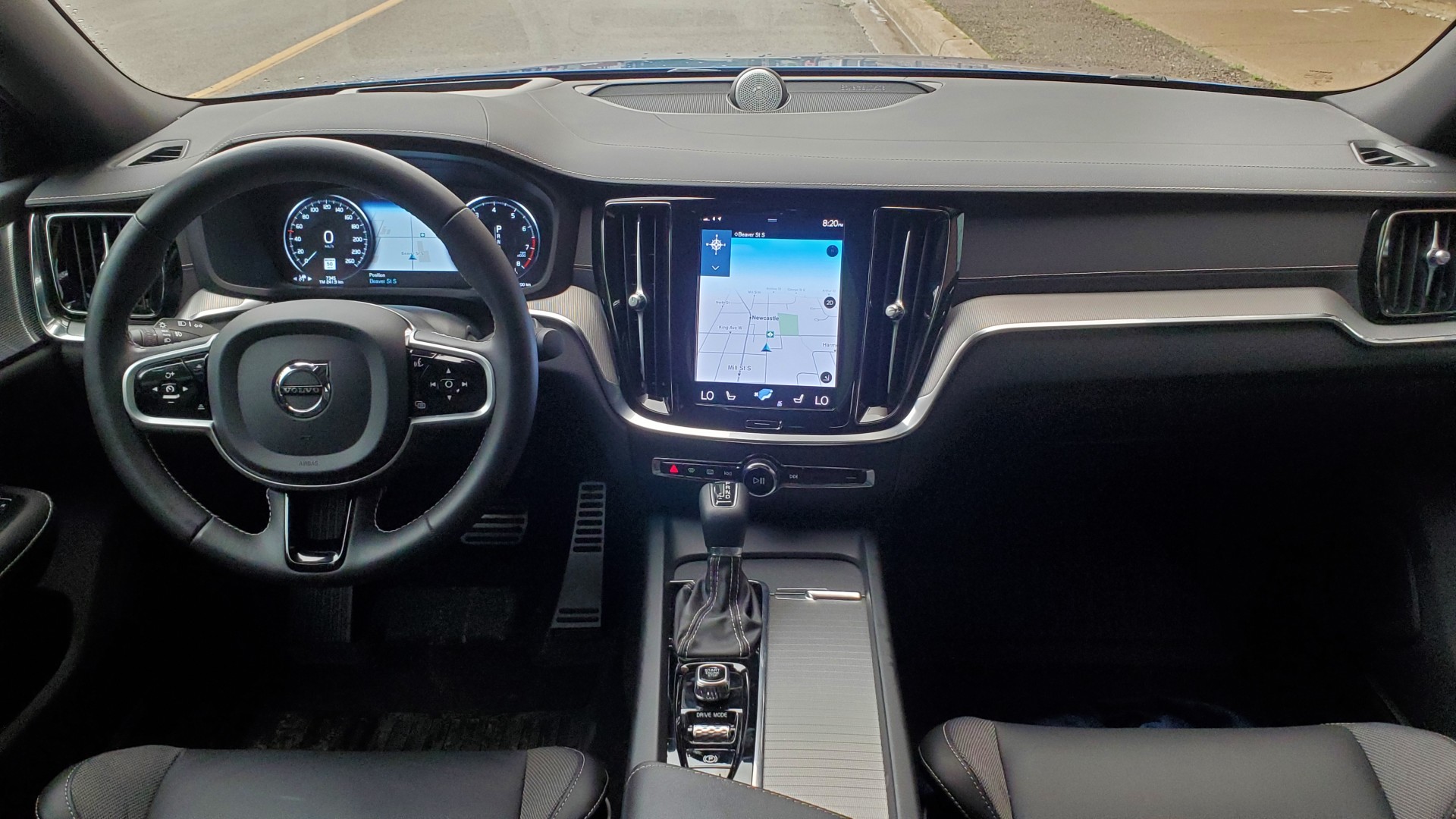 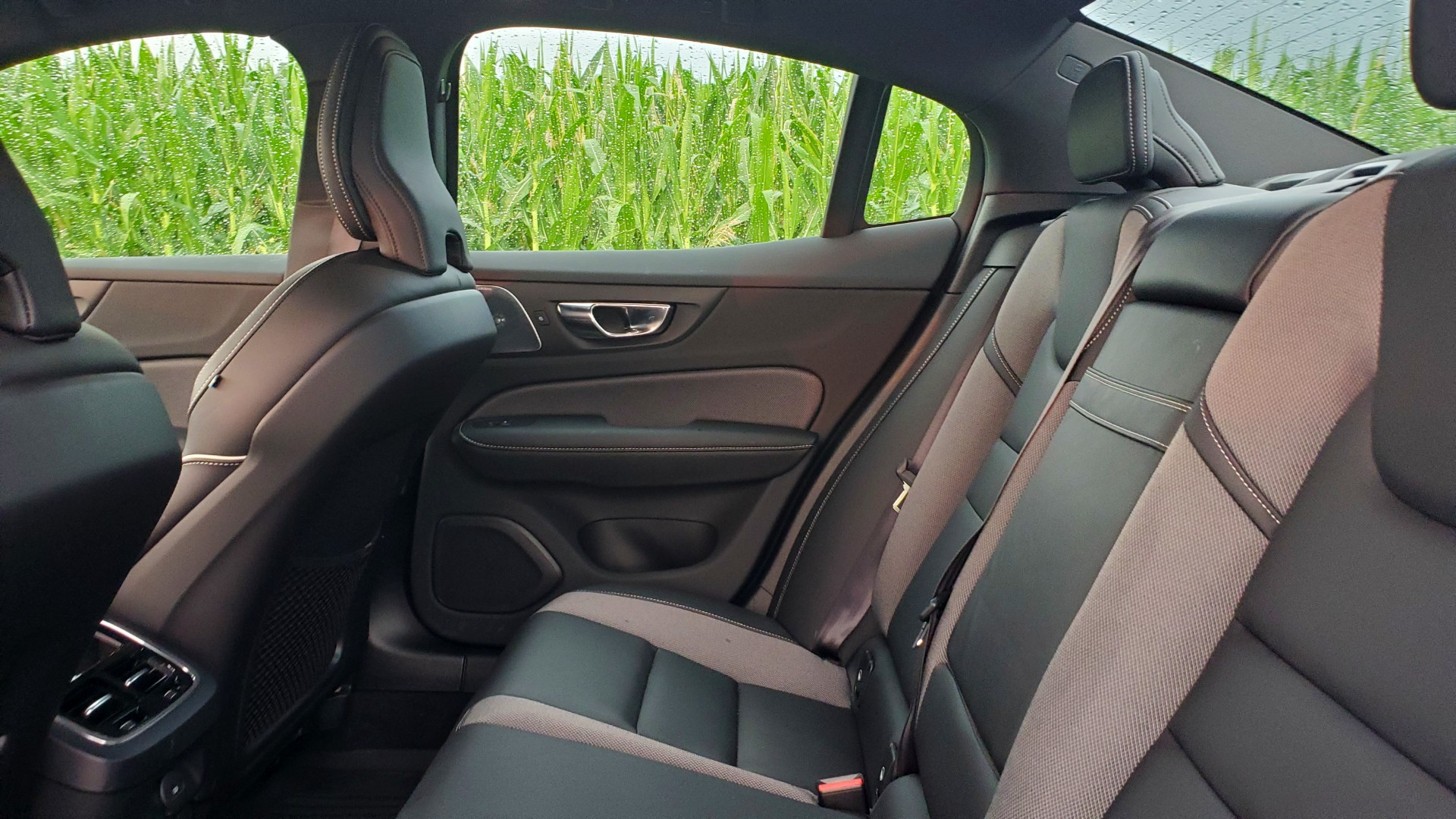 As for the drive, dynamic mode really livens up the 2.0-litre supercharged and turbocharged four-cylinder with a solid 800-1,000 rpm bump which produces noticeably snappier acceleration and a more engaging driving experience thanks to a rev-building shift pattern from the eight-speed autobox. Comfort and eco modes blunt the fun quite a bit, so dynamic is the way to go to squeeze the most out of the R-Design package.

In terms of ride quality, the bigger 19-inch wheels and Pirelli P Zero rubber ensure bumps and cracks from broken pavement and expansion joints, such as the many that exist in my Oshawa neighbourhood, will be transferred more frequently to one’s spine, but it’s not oppressive. On the plus side of a stiffer ride, however, is sport chassis tuning that delivers handling that feels light and responsive with good steering feedback and quick turn in. Cabin noise is generally well supressed, but how one drives the car has an impact. 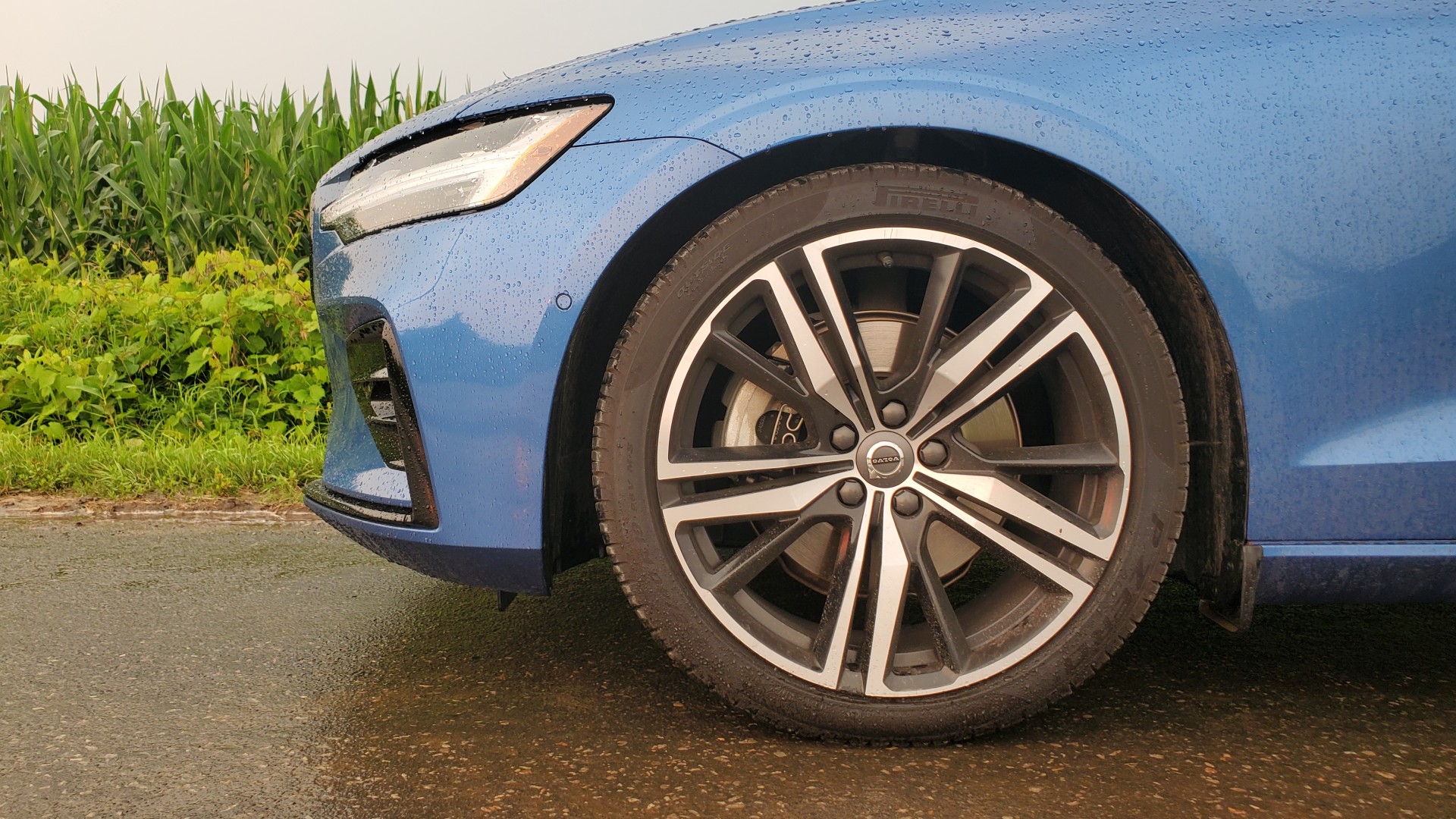 Overall, I like the S60 T5 R-Design and I think it represents the best value in the lineup when content, performance, cost and fuel consumption (10.2 L / 100 km average during my test) are accounted for. It’s not likely to conquest many who desire German performance, but considering its price, the R-Design’s value proposition is compelling, especially if optional kit is pared back.