Venza is back, and thinks it’s a Lexus.

If one of the reasons for the 2021 Toyota Venza nameplate being brought back is to make you forget about the Camry, consider it mission accomplished.

Ok, so that’s probably not what Toyota execs had in mind, but it also stands to reason that they knew some sales of their long-standing bread and butter sedan would be cannibalized by yet another crossover.

The 2021 Toyota Venza is essentially the Japanese market Harrier, rebadged for our consumption. Based on the TNGA-K platform that’s also under the Camry and the new Sienna, the Venza gives Toyota a complete arsenal of crossovers with which to woo consumers.

The Venza sits in between the RAV4 and the Highlander in size and price starting at just under $40K. It competes with the Honda Passport, Chevy Blazer, Ford Edge, Nissan Murano and a few others. 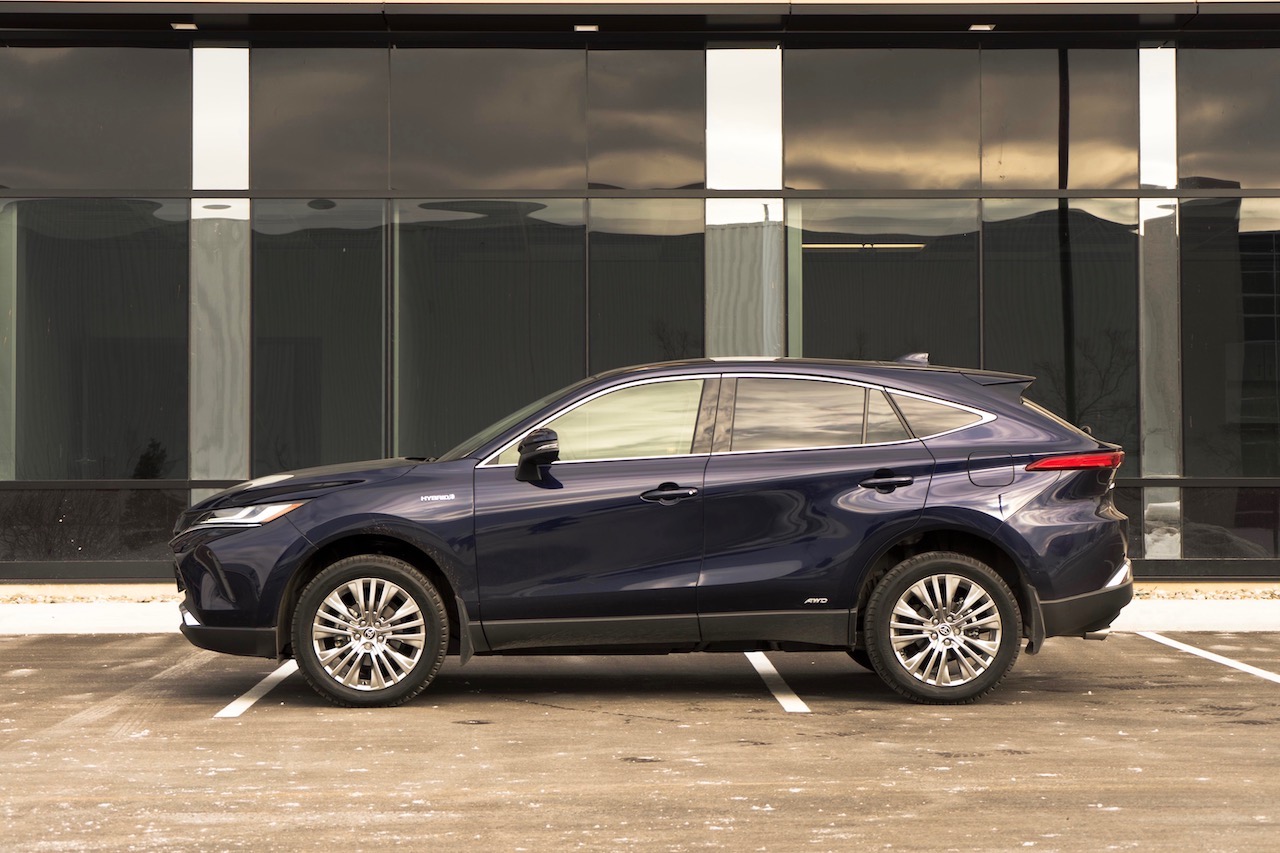 The common theme among these crossovers is an extra dollop of style and content making them somewhat of a more premium proposition.

Where the Venza separates from the rest of the competition is with its standard hybrid powertrain. In fact you can’t have it any other way. The last Venza, discontinued in 2015, was available with a V6 and was a big reason for its popularity. This hybrid drivetrain isn’t as refined or as smooth as that V6 but the resulting boost to economy is a welcome trade-off.

Power for the new Venza comes from a 2.5-litre 4-cylinder gas engine and a trio of electric motors, two up front and one in the back. Total output is rated at 219 hp. The rear electric motor gives the Venza an on-demand all-wheel drive system that doesn’t depend on drive shafts or any sort of physical linkage for power transfer. When slip is detected, the motor will power the rear wheels independently, providing additional traction.

The system is completely seamless and it’s less complex than a traditional mechanical system but not really intended for any sort of off-roading outside of snow or dirt covered roads or light trail duty. 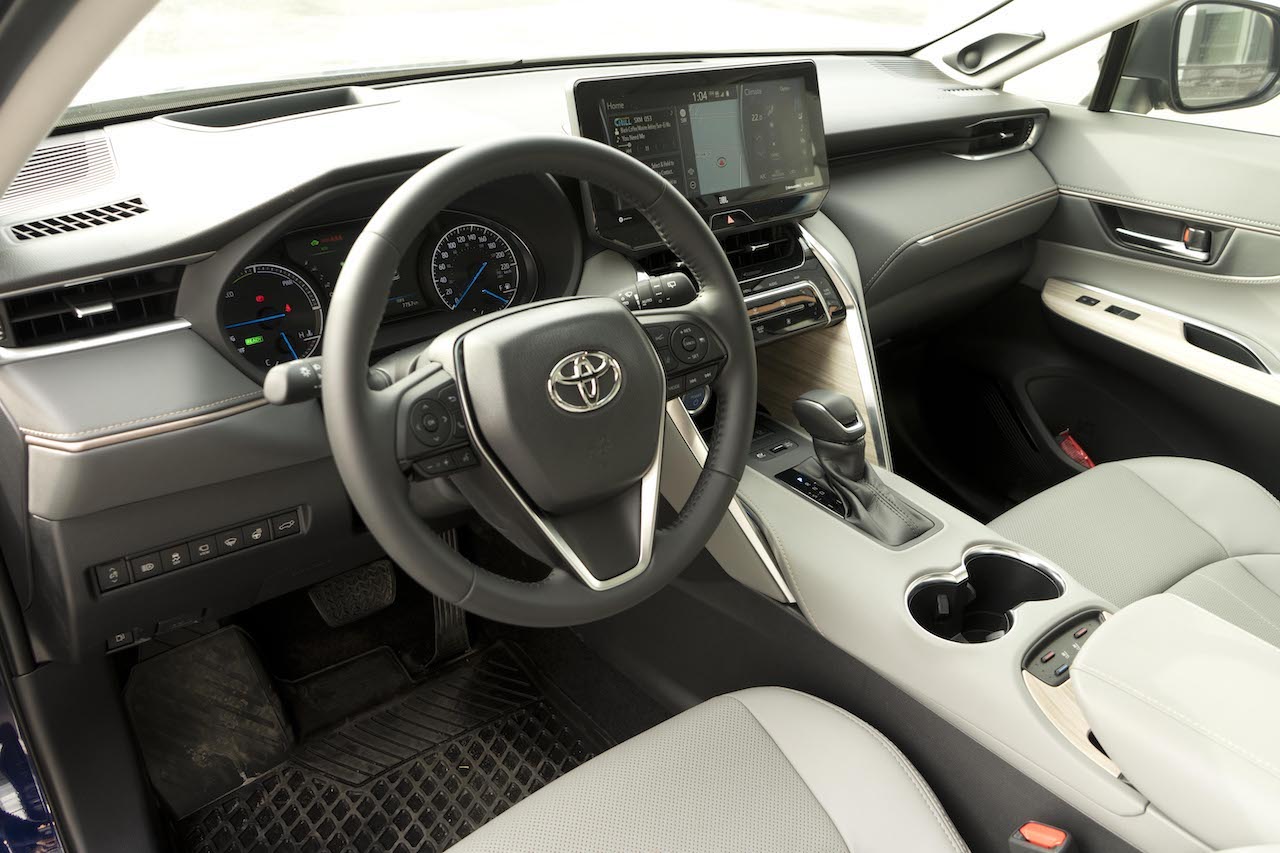 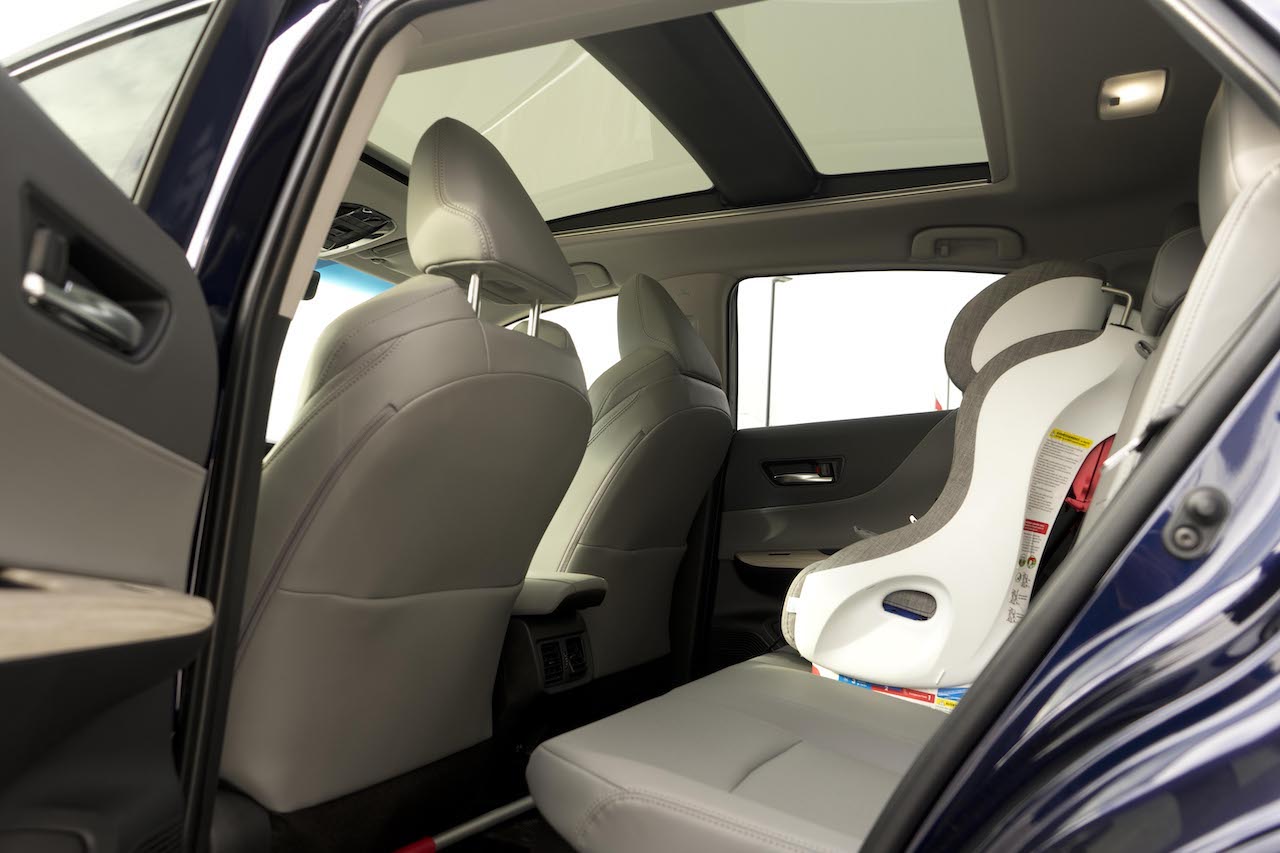 You can get the Venza in three different grades starting with the base LE ($38,940), moving up to the XLE and topping out at the Limited trim seen here. This “fully loaded” Venza rings in at $47,690 and that’s a pretty premium price.

But the Venza does have a premium air about it and a sense of elegant style that makes it feel like they’ve borrowed a few pages from the book of Lexus, especially when stepping into the cabin. The dash has soft, leather-like surfaces with coppery piping, tastefully applied faux woodgrain accents, and comfortable front seats that are both heated and ventilated.

It’s spacious too, with enough space for a quartet of six-footers. Cargo area is below average but with 816 litres you should be able to stuff quite a bit back there before having to fold the seats down. There’s also the Star gaze panoramic glass roof that appears frosted at first but instantly goes clear at the touch of a button, so you get diffused sunlight while avoiding the head-cooking rays you typically get from a large transparent pane of glass on the roof. It’s a neat party trick that was once reserved for six-figure Benzes but you can now find it on a mainstream Toyota.

Where it goes wrong, for me at least, is with the capacitive touch panel for the climate controls and stereo. While other Toyotas use hard buttons, the Venza forgoes this for a fingerprint attracting glossy black panel that’s difficult to use when driving. Worse yet, there’s no volume or tuning knobs, so you have to rapidly tap on a fake button to raise or lower the volume or change the radio station. 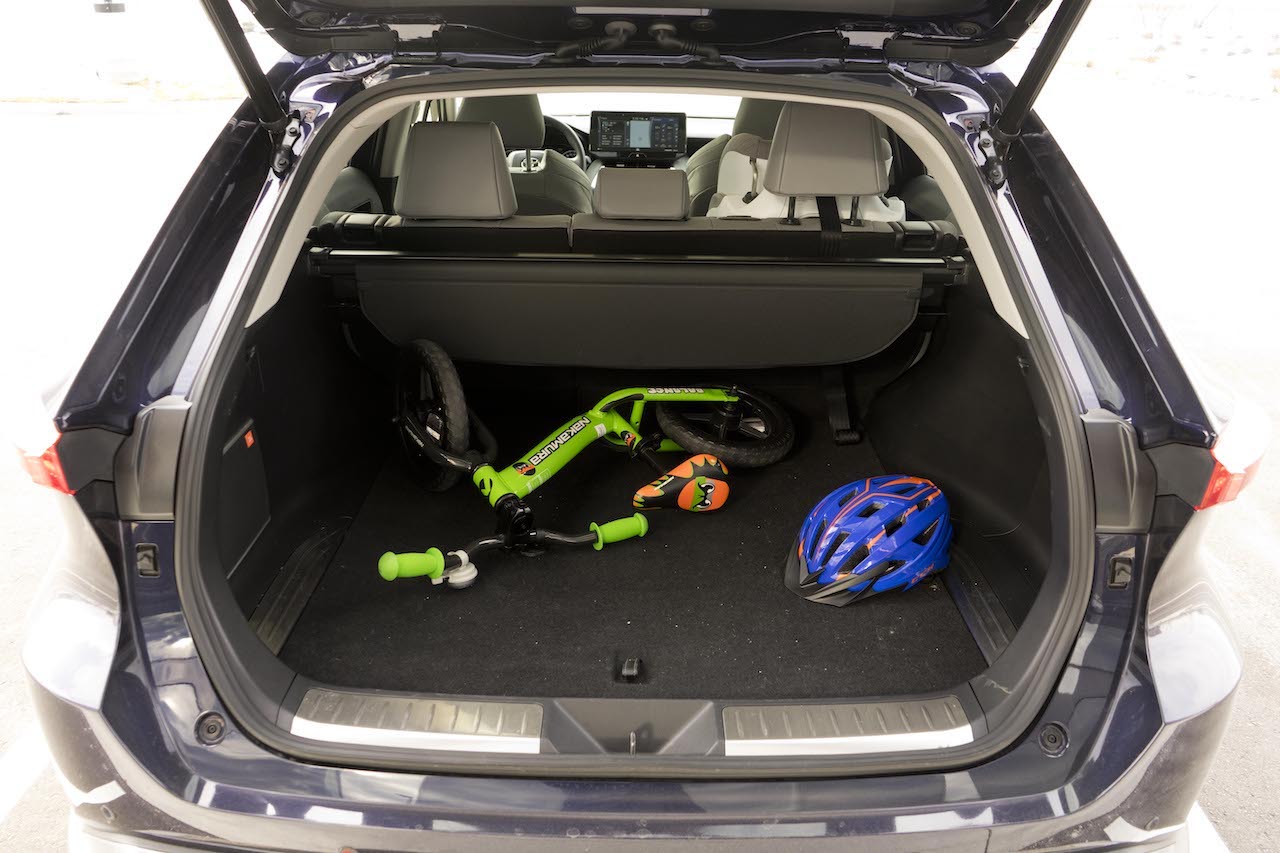 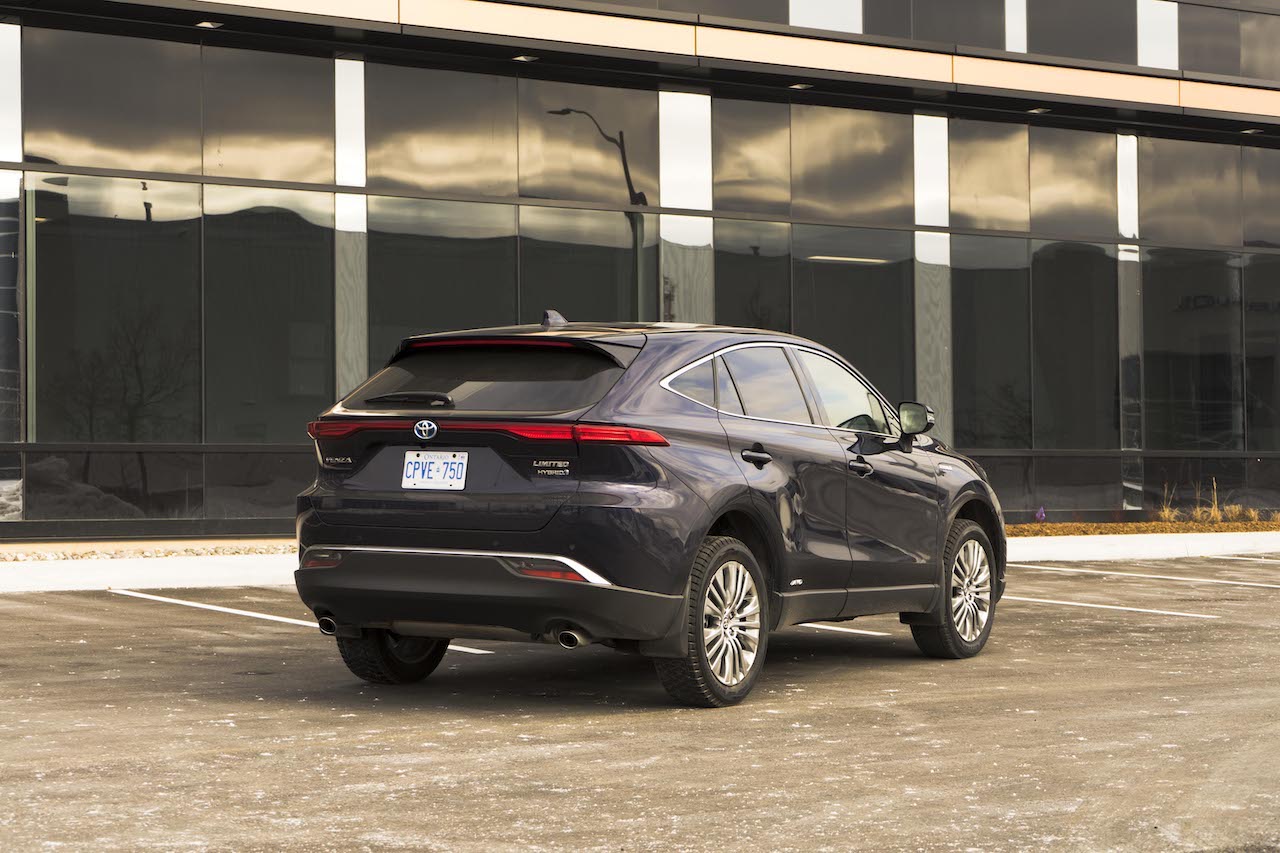 Some might like the aesthetic but when you realize that you’ll need to keep the glove box stocked full of micro-fibre cloths just to keep it clean, you might not be so enthused. And the base Venza doesn’t get this touch panel, using a traditional set up of buttons and knobs in its place.

The Venza is a relaxed, easy cruising family vehicle. And if that’s what you’re looking for then it’s a great choice. If you want any sort of personality, or fun-to-drive characteristics, you’re not going to find it here. The 4-cylinder is not as brash as it is in other Toyotas, which is nice, but it still sounds unrefined and coarse when you give it the beans.

When just schlepping around which is likely what you’ll be doing, the Venza is hushed and comfortable even at highway speeds. If you close your eyes, the Lexus equivalency becomes stronger. It’s not far off the feel of that more aspirational brand and I think that’s the Venza’s biggest takeaway.

Of course being a hybrid, you expect efficiency, and with a figure of just 7.0 L/100 km after a week of my typical lead-footed driving, you get just that. You don’t need to do anything special or learn any new driving techniques. The Venza’s brain will take care of portioning out the power in the most efficient manner. A full EV mode is available but is only good for short distances at low speeds, like in a parking lot.

In this near premium crossover segment, the Venza offers exactly what consumers are looking for: a comfortable, and semi-luxurious vehicle that ups the ante with an efficient hybrid powertrain and some pretty cool tech. Move over Camry, the Venza is back. 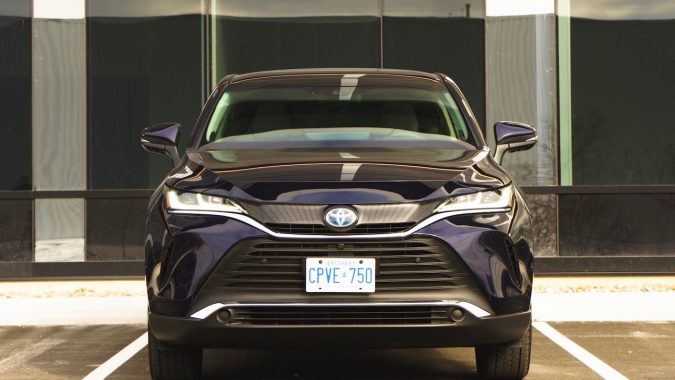 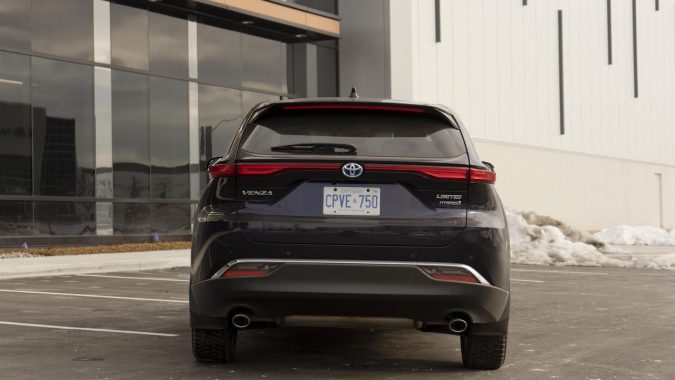 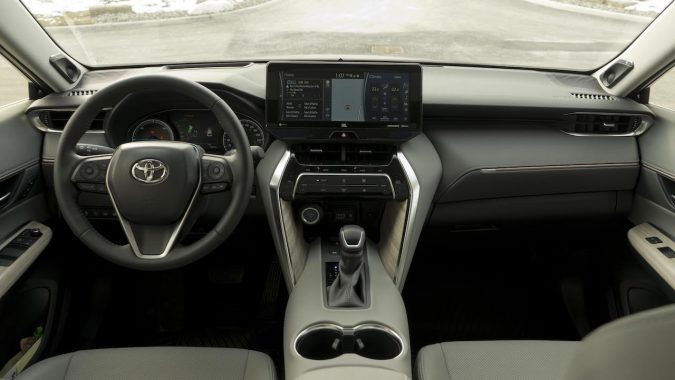 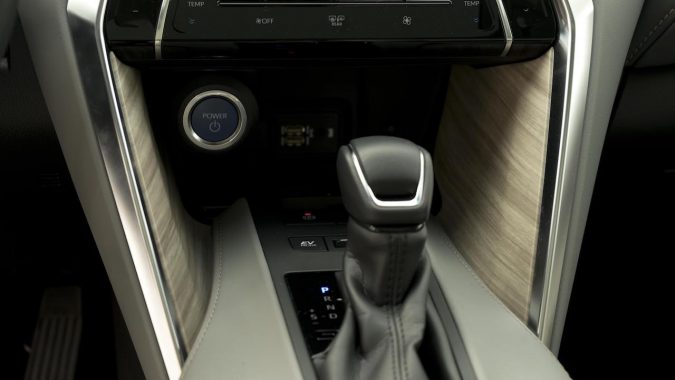 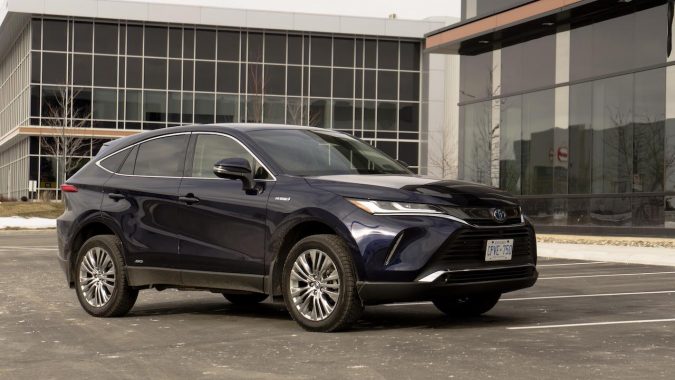