Go ahead, get it dirty

If you’re in the market for a full-size 4×4 pick-up, but for some reason don’t want a Ford F150 or a Chevrolet Silverado or a Ram 1500 — perhaps because of their popularity / ubiquity or perhaps because you’re just plain brand loyal to Toyota, you’ll probably find yourself eying a Tundra.

Not much is new with the 2021 offerings in the Toyota Tundra 4×4 lineup — save for a few less trim level options on the more “compact” Double Cab models and even more options for the spacious Crewmax models. There are now a whopping seven trim levels for the Tundra 4×4 Crewmax when you include the 1794 Edition package available on the fully loaded “Platinum” model.

Each is a little different, but to get a sense of where the core Tundra offering is relative to the very fierce competition, we tested the “Trail” model — one of the lower-spec, albeit sharp looking (at least, from the outside) models.

One standout feature on the Tundra 4×4 is its familiar, yet beefy 5.7-litre DOHC V8 with VVT-i. The Tundra doesn’t mess around with any of that turbocharged V6 or hybrid tech stuff. It’s just a proper, thick boy V8 that relies on yesteryear’s variable valve timing technology in an effort to be kinder to the planet and your wallet. The engine literally roars to life on ignition and makes immediate promises of the 381 hp, 401 lb-ft it has on tap — promises it’s happy to deliver on. 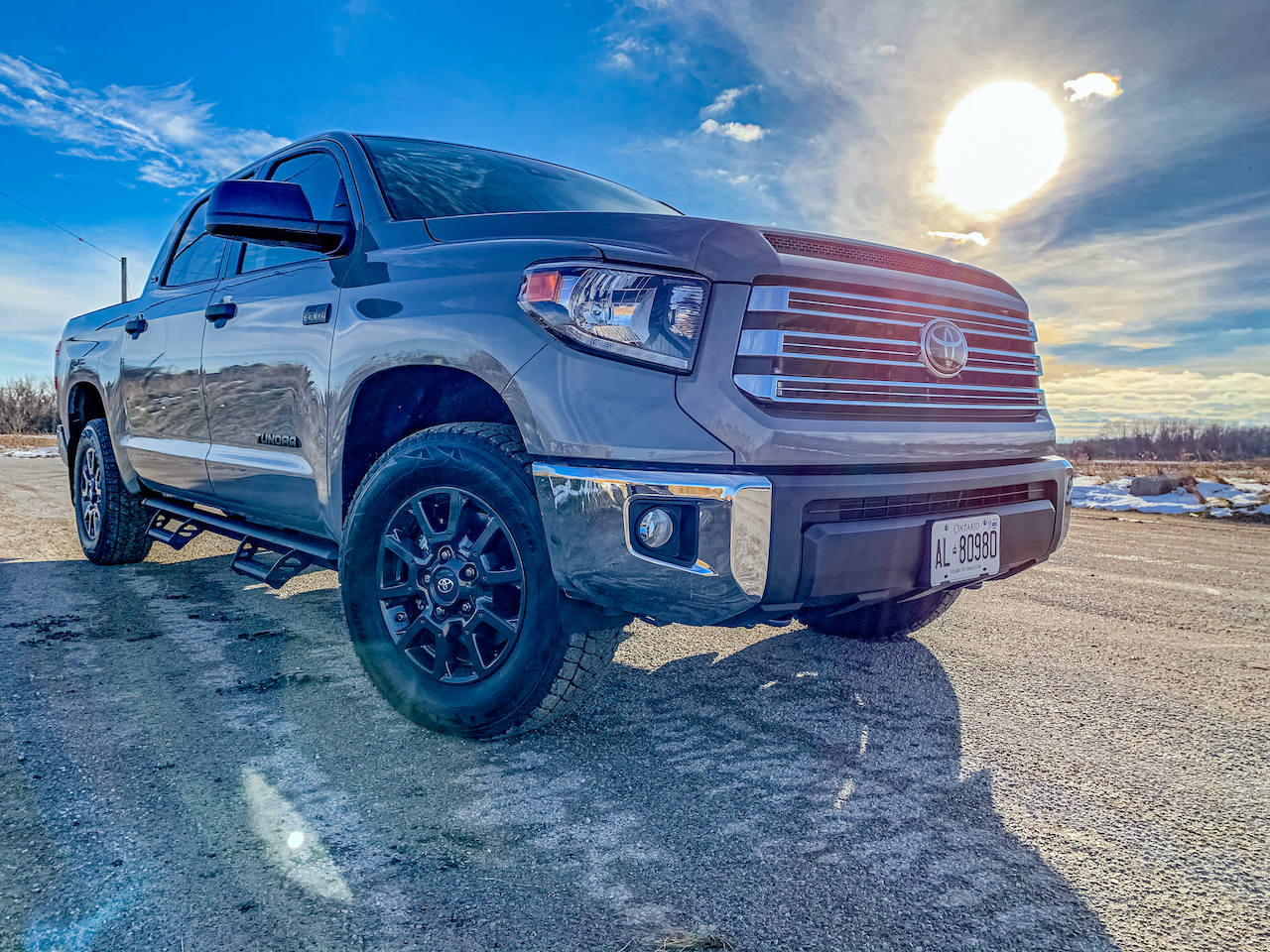 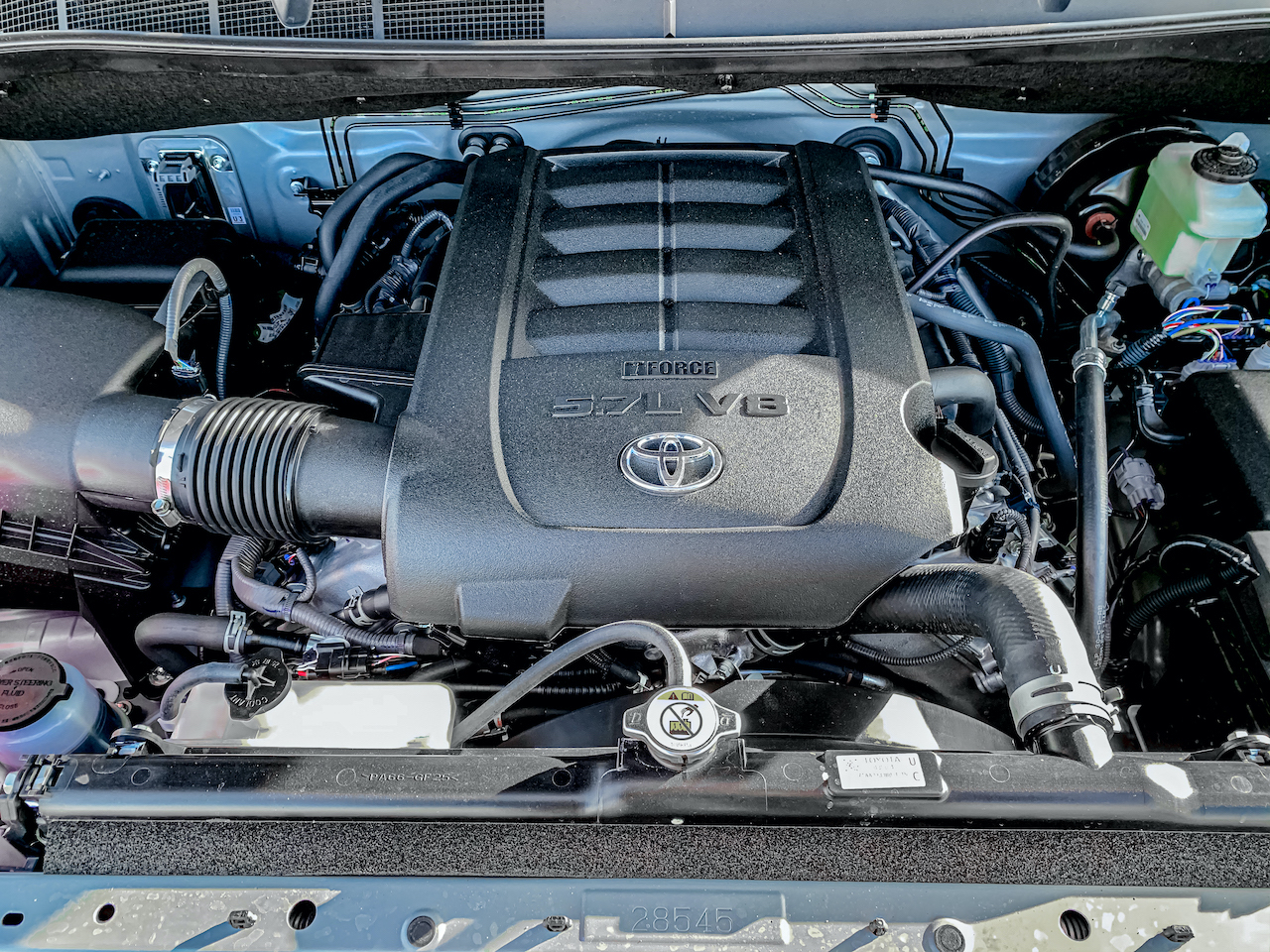 However, this old school approach isn’t without its drawbacks. Because even though a god-fearin’, angry V8 is what you want under the hood of your full-size pick-up, it has to be said that this thing is thirsty. Even on a long, easy highway cruise, in 2×4 mode, the very best mileage I could manage was 15.5 L/100km.

I couldn’t help but think about the Ram 1500 Bighorn I tested earlier in the fall. It was one of the e-torque hybrid models and while it was certainly down on power compared to the Tundra, it did do under 11 L/100km and had a range of almost 100 km more to a tank.

That particular Ram also had a much, much nicer interior and infotainment system that the base Tundra’s interior. If you want premium leather interior in your Tundra, you’ll have to shell out an extra $3,000 over our as-tested Trail model for the TRD Off Road Premium trim level.

The front seats are heated as standard, but the controls are away from the driver and tucked under the center infotainment unit — so you’re never quite sure if you’ve just turned them on or off. While premium sound systems are available on higher trim levels, including a 12-speaker JBL system for the top-tier TRD Pro model, the nine-speaker base unit equipped in our as-tested model left a lot to be desired. Amplification was weak and overall fidelity was low.

A 12V accessory power outlet is standard, so is an 8-inch touch screen that is both Apple CarPlay and Android Auto compatible, and displays your reverse camera. The user interface is simple, straight forward and easy to navigate through.

So the Tundra Trail is what it is. A gutsy, but very low optioned 4×4 with some tough guy black badging on it to let the world know you’re a UFC fan.

But should you buy one? 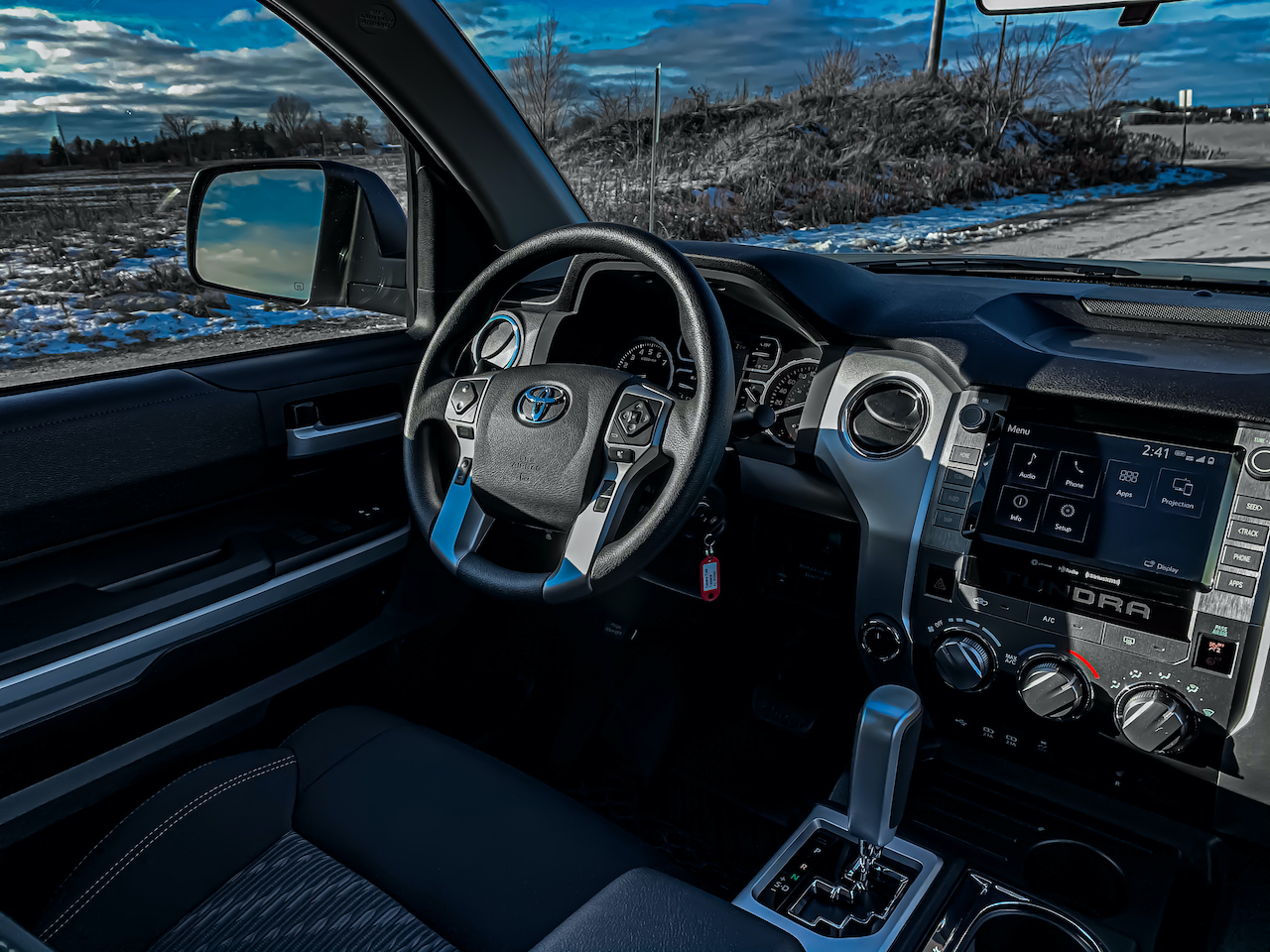 If you’re buying a daily commuter or a family mover or even a sport truck, you’ve got to go for a higher trim level than the Trail. For my money, I’d at least shell out another $10 (yes, $10 extra) for the TRD Off Road trim level.

Yes, you lose some of the Trail’s nice little exterior touches such as the black badges, dark grey TRD Off Road wheels and “Predator” side steps. Those would be missed. Sincerely. They are admittedly sharp looking.

However, with the TRD Off Road, you gain a moonroof, push button start, Bilstein shock absorbers (those you really want), LED headlamps and fog lamps, a blind spot monitor with rear cross traffic alert and the premium audio system with embedded navigation. And more. So, for most of you reading this, who are thinking of getting a Tundra 4×4, at least spend the extra $10 to own a vehicle with all the modern comforts you’d expect — if not the extra $3,000 for the leather trim.

However, if you’re amongst those planning on using your Tundra 4×4 as a work truck, then get the Trail.

It occurred to me after about a week of driving the Tundra Trail, that the lack of bells and whistles is sort of the point. It can’t have a nice interior as it’s going to get covered in dirt mud, donut crumbs the occasionally spilled coffee.

That’s why it’s painted grey. So that it doesn’t look dirty on a construction site. Or anywhere else, for that matter. The Trail is down to business. No fancy parking assist or other unnecessary gadgets for city slickers like me who struggled to park the Tundra in our condos’ underground parking garage. It’s a big truck, with a big engine and some big capabilities for big jobs. Look no further than the Trail’s tow package for evidence of this. It comes with a heavy-duty tow hitch receiver and a transmission cooler. Those are not needed for daily driving. 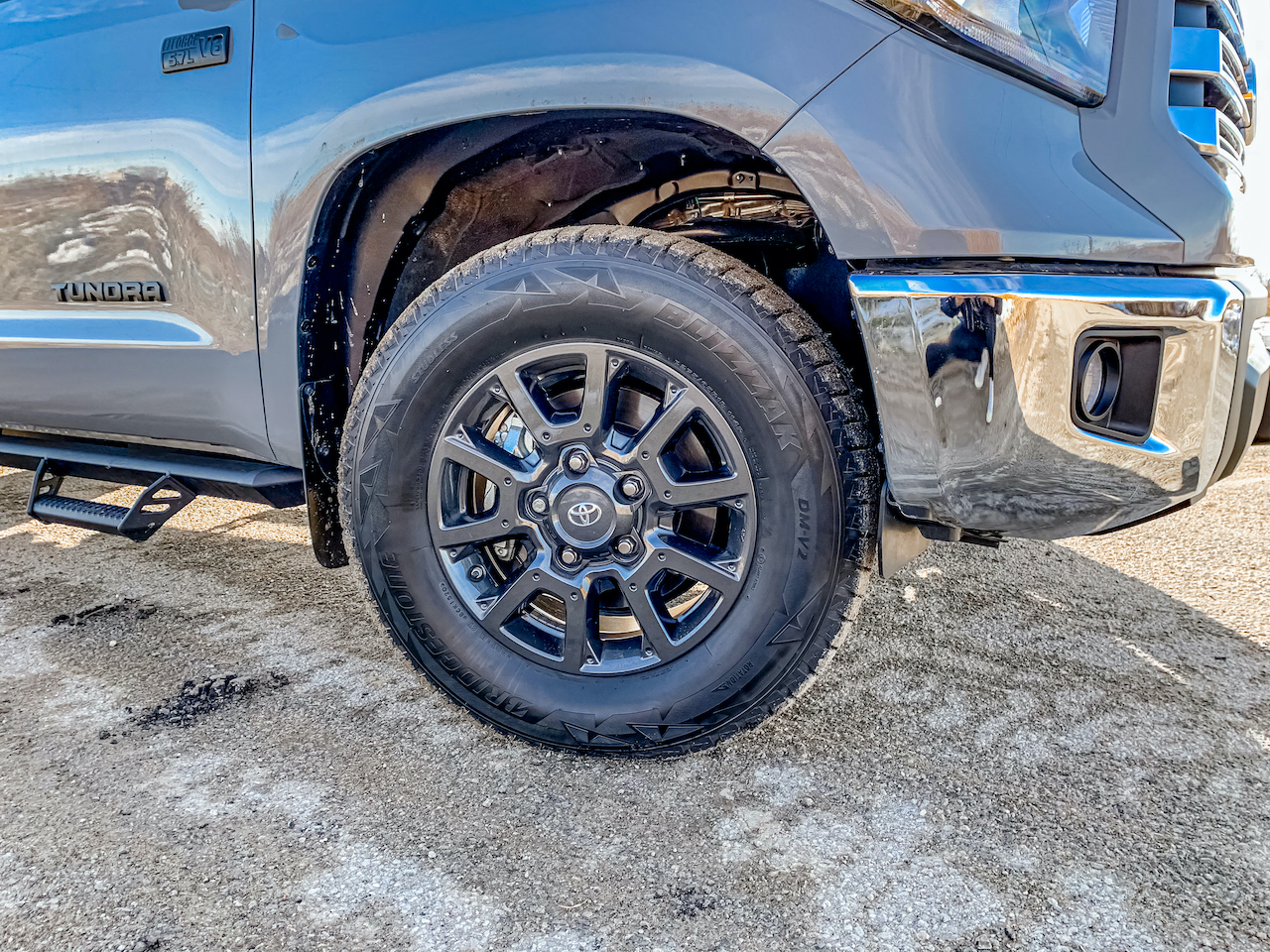 In TOW/HAUL mode, lower gears are held for longer and the transmission no longer hunts for gears. An auto LSD uses the rear brakes to imitate the job of a traditional mechanical limited-slip differential. Toyota claims this is because its auto unit is easier to maintain than the mechanical version.

Then there’s the Tundra’s trapezoidal rear frame section (that is a combination of words which I never thought I would write) and toe-out rear leaf springs. These are used to create lateral stability when cornering and towing heavy loads. And that’s something you can actually feel when driving the Tundra, even normally. It’s so much more planted around corners, especially compared to the heavy body roll you experience in domestic pick-ups. As a bonus, the Tundra is a much smoother ride than some of its domestic rivals — including that Ram Big Horn I tested. Go over a set of train tracks, for example. The Tundra is practically a Rolls Royce compared to the Ram in that respect.

So, the Tundra Trail is the truck you want when you need a truck. It’s a piece of equipment that you buy because you have a job to do. The Tundra Trail is like a pair of steel-toed Kodiak boots. They may not be very fashionable. You might not want to wear them out to a date. But if you got a real job to do, then they’re what you want to get it done. And you’ll never have to worry about getting a little dirt on them. 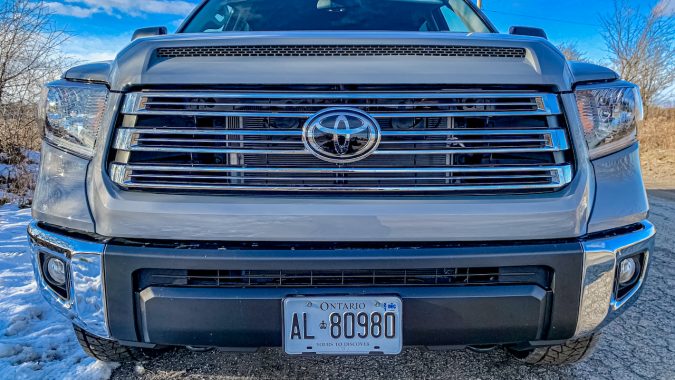 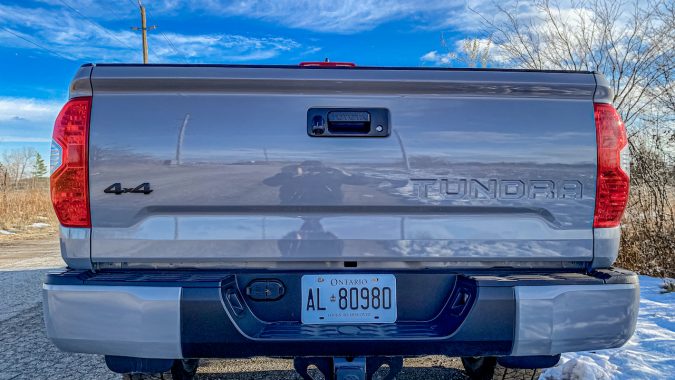