Walking up to the 2021 Toyota Avalon for the first time, I couldn’t help but wonder how much – if any – it had advanced past the point of it being a stretched and comfier Camry. This is how I had always thought of the Avalon from way back. One my Grandpa would like. Or Grandma, if either of them needed to ferry other adults to the golf course, with a back seat and trunk that could accommodate a foursome and their clubs.

In reality, I’m fairly sure both my grandparents never saw a single golf course or even a golf club in person, back on the tiny island on which they were born and never left. And these days, the latest Avalon is actually a lower and more aggressively styled sedan than the Camry. Plus the Avalon Limited is now up to date with Android Auto (finally) as well as Apply CarPlay, and becomes the only Avalon to offer all-wheel drive for 2021.

It thus takes on the more conservative luxury jacket, with its standard four-cylinder engine and AWD, versus the sportier Avalon XSE’s more powerful V6 with actual shift paddles – yes, shift paddles! In an Avalon!

Upon entering this Ruby Flare pearl-coloured Avalon Limited AWD, it was clear this was no mere full-size comfort machine: umm, why is my head brushing this headliner? Is this powered seat all the way up? Being a full inch shy of six feet tall, this is not what you’d expect when you hop into a full-size sedan. There’s also a steeply raked windshield and relatively shallow windows, for a tight window greenhouse that’s not Camaro-tight, but surprisingly so for a car like this. 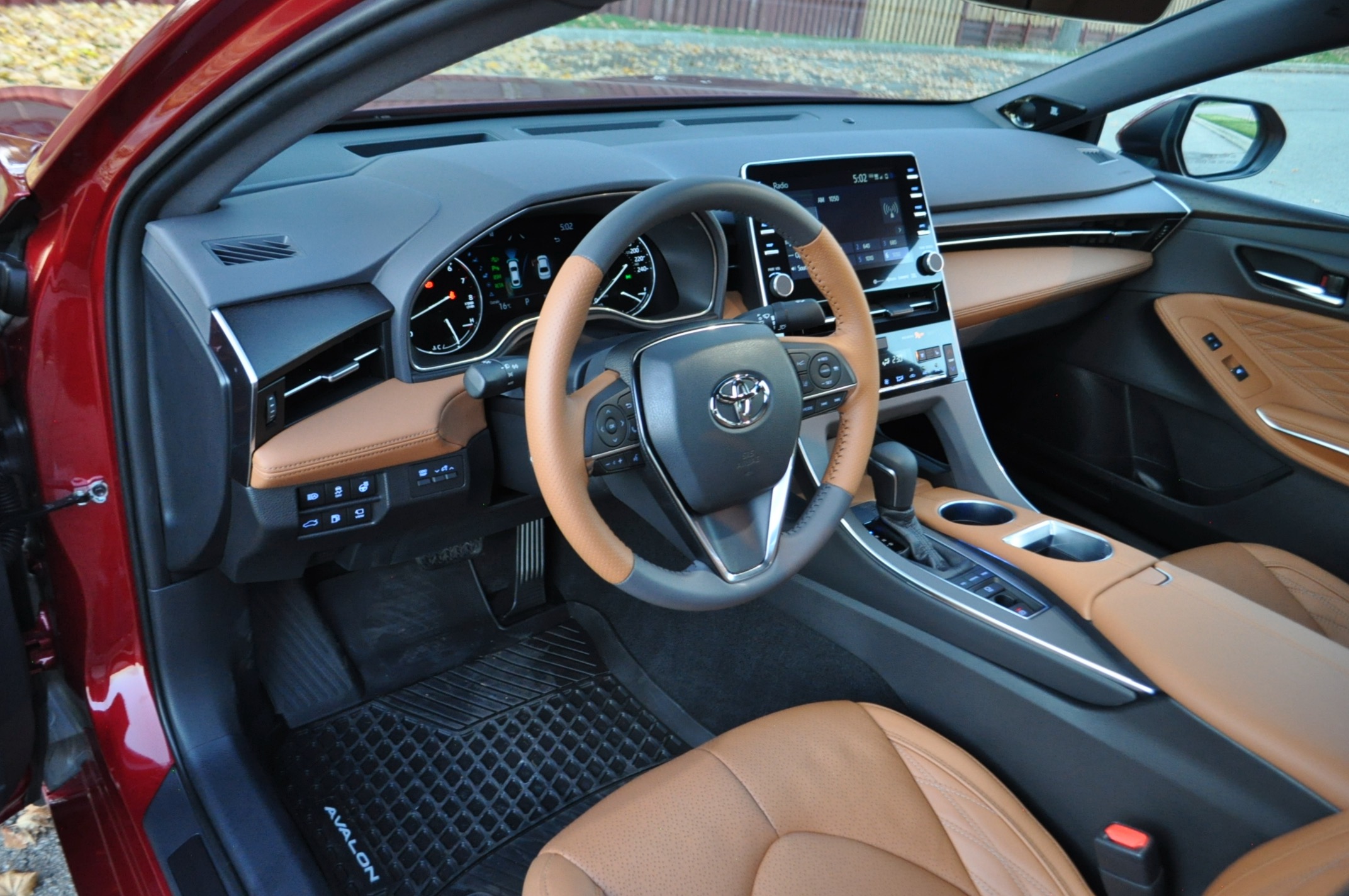 It felt like it had less headroom than the new Nissan Sentra I was in just prior to it. And when I checked the Avalon’s official numbers, it did have less front headroom than that Sentra. And also less than the Camry that shares a platform with the Avalon, thanks to a 10 mm lower roof.

In fact, unlike Toyota’s marketing materials, the Avalon is still listed by the Canadian government as a mid-size model, just like the Camry, despite the Avalon’s body that’s roughly 10 cm longer and a centimetre wider (and roughly equal in size to the Lexus ES 350). This extra width and length adds up to extra stretch out legroom in the rear seats and more passenger space overall, plus a roomier cargo bay of 456 litres.

But that lower roof height goes against the taller, crossover-friendly trend these days, which not only means this Avalon may not be the car for taller folk, but it’s also just a little tougher to climb in and out of for those less mobile. We’re not saying it needs a Lamborghini limbo; just something to keep in mind if, say, you’re planning lots of hard leg days…

It’s a very nicely finished interior, with a large sunroof, quilted leather, ventilated and heated seats up front, heated rear seats and a heated steering wheel to warm away winter chills. The tan-coloured accents on the steering wheel, centre console and cabin-wide leather on the dash helped give the interior an upmarket feel, with a nice handy place to stash your phone while driving where you won’t see it, or have it slide around. 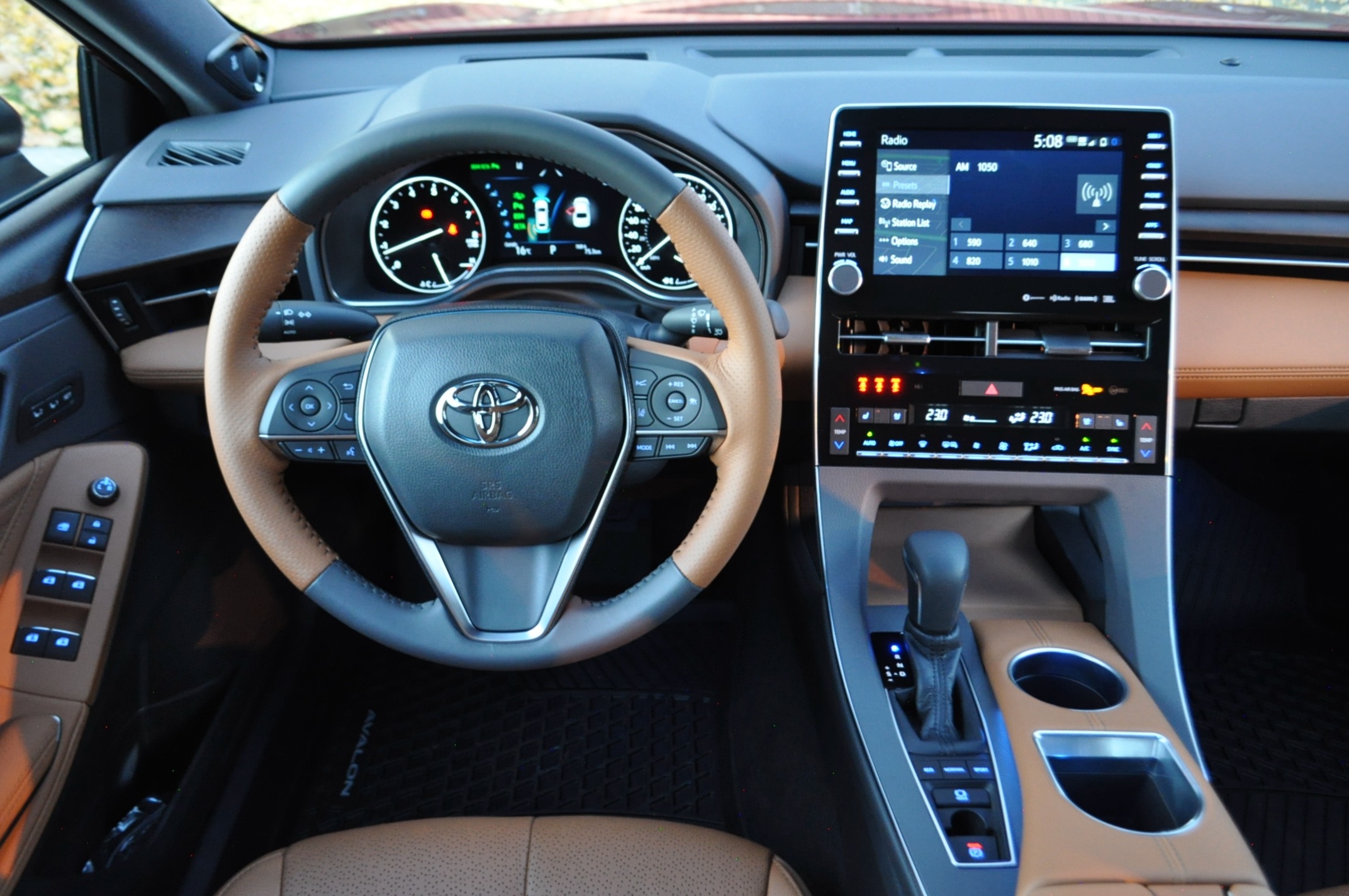 Unfortunately, this handy little phone cavern doesn’t wirelessly charge your phone, which like the late availability of Android Auto and Apple CarPlay, suggests that having the latest conveniences are still not a top Toyota priority, even on the top Toyota sedan. To charge you’ll have to use a cable in the centre console, but it does have newer USB-C and older USB type as well. But it’s that conservatism with technology that helps Toyotas maintain their high reliability scores correct? Likely true, but no brand is infallible.

On this tester, the infotainment center screen froze on me once, just after hopping into the driver’s seat. The screen adjusted, but all stations and modes muted, even after turning the stereo off and on, and calls wouldn’t go through. Upon restarting, the radio and Bluetooth came back, including satellite radio.

From a driver’s perspective, the 2.5-litre four-cylinder that powers all Limited versions of the Avalon is relatively smooth, but especially once dipping your foot into the power, perhaps not as quiet or as powerful as one may fairly expect for a $50,906 luxury-oriented Toyota. Its 205 hp and 185 lb-ft of torque power outputs are sufficient but somewhat middling for a vehicle this size, but under most conditions, it combines well with the standard eight-speed automatic to provide a largely refined and unobtrusive overall driving personality.

The standard all-wheel drive system is largely a slip and grip type system, saving fuel by engaging the rear wheels predominantly when it detects any slippage of the tires up front, sending up to half the power rearward. The power though flows strictly front to back, so no performance-oriented torque-vectoring side-to-side here. 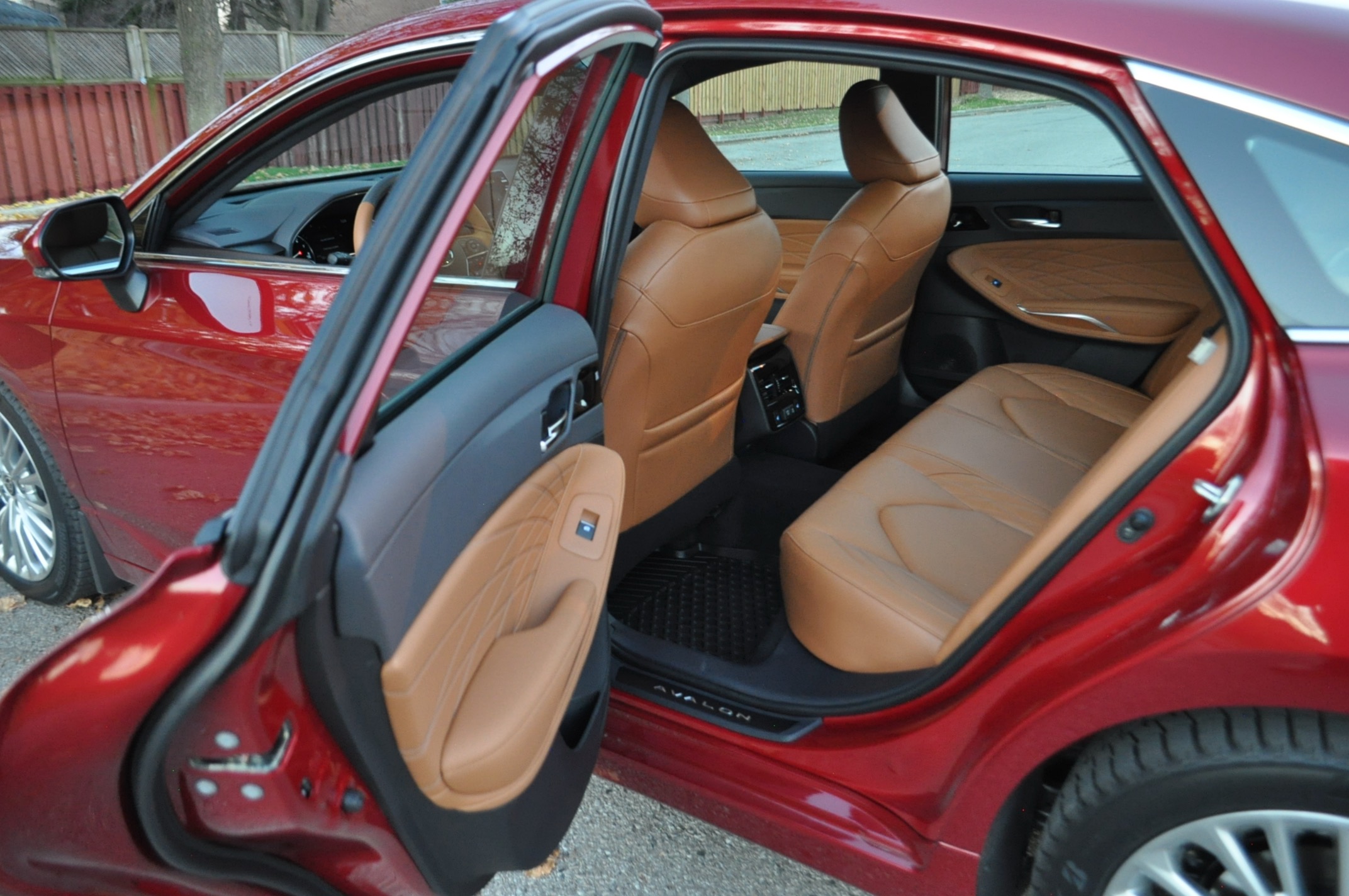 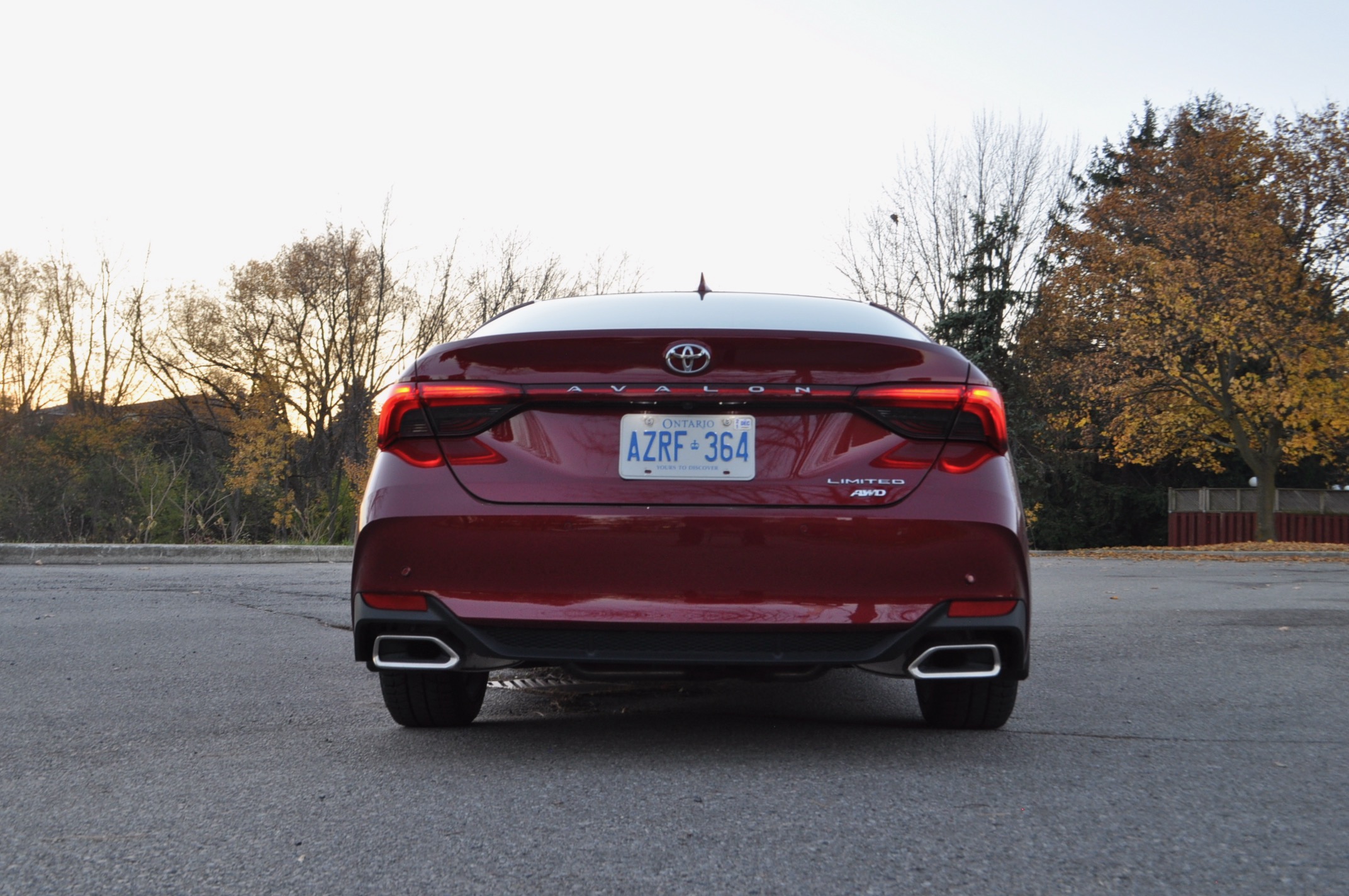 Did I miss the more responsive 301 hp V6 in the sportier Avalon XSE? Yes. Did I occasionally wish for that car’s steering wheel shift paddles, which would help at least drum up whatever power is available from the four a mite quicker? Yes.

Will most potential Avalon owners appreciate the extra security of all-wheel drive more than generous helpings of power? Likely yes. Will the fuel efficiency savings of the four-cylinder Avalon Limited AWD (8.4 L/100 km combined city/highway average) over the sportier Avalon XSE (9.5 average) be worthwhile from a cost perspective? Perhaps eventually, but likely not. Natural Resources Canada numbers estimates an annual fuel cost savings for the Avalon AWD of $275 dollars per year compared to the regular Avalon V6 ($2,100 versus $2,375), though of course, YMMV.

Of course, for folks looking for the smoothest and quietest vehicles with a roughly $50k new car budget, which is where traditionally the Avalon fared well on the lower edge of Lexus territory, there are now various battery electric vehicle options, none with such a roomy rear seat especially.

Considering the Avalon Limited AWD’s roughly $5,700 higher starting price than the Avalon XSE, if it came down to those two, I’d opt for the more powerful and involving XSE, and use the money saved to invest in some good winter rubber, which we should all be doing regardless of drivetrain. But for drivers less concerned on driver engagement, ones that aren’t crossover fans and want a good-looking yet roomy traditional sedan, the 2021 Toyota Avalon is certainly worth a test drive.