Don’t let dark colouring and subtle lines fool you; the A35 is a wolf in sheep’s clothing

The Mercedes-Benz A-Class is one of the newest members of the Mercedes family, having joined the North American market just two short years ago as a 2018 model.

Of course, that’s not to say it hasn’t been around the block a few times elsewhere; it’s served duty in various European markets, for example, since 1997. It was a very different vehicle back then, though, looking much more “enlarged Smart” than “cool compact hatch”, as seen here. Actually, that’s not entirely accurate, either, since the A-Class still doesn’t look like a cool hatch in all markets; the Americans, for example, only get the sedan while we Canadians get both.

Which is too bad for them because in hatchback form seen here, this babiest of Benzes is cool even if it is actually a little pared-back in the black paint seen here. You can have more aggressive shades like “Sun Yellow” and “Patagonia Red” if you like – but I’m not so sure.

Here’s the thing. The A 35 is a master of understatement because, beneath its tamed skin, it’s a turbocharged, all-wheel-drive cracker of a small hatch. That “Q-car” factor is something that’s served Mercedes well for a long time, and it’s all part of the fast Benz charm.

The cockpit, though, is full of eye-catching details from the dual-display dash, to the vent roundels, to the flat-bottomed steering wheel with a red centering band. 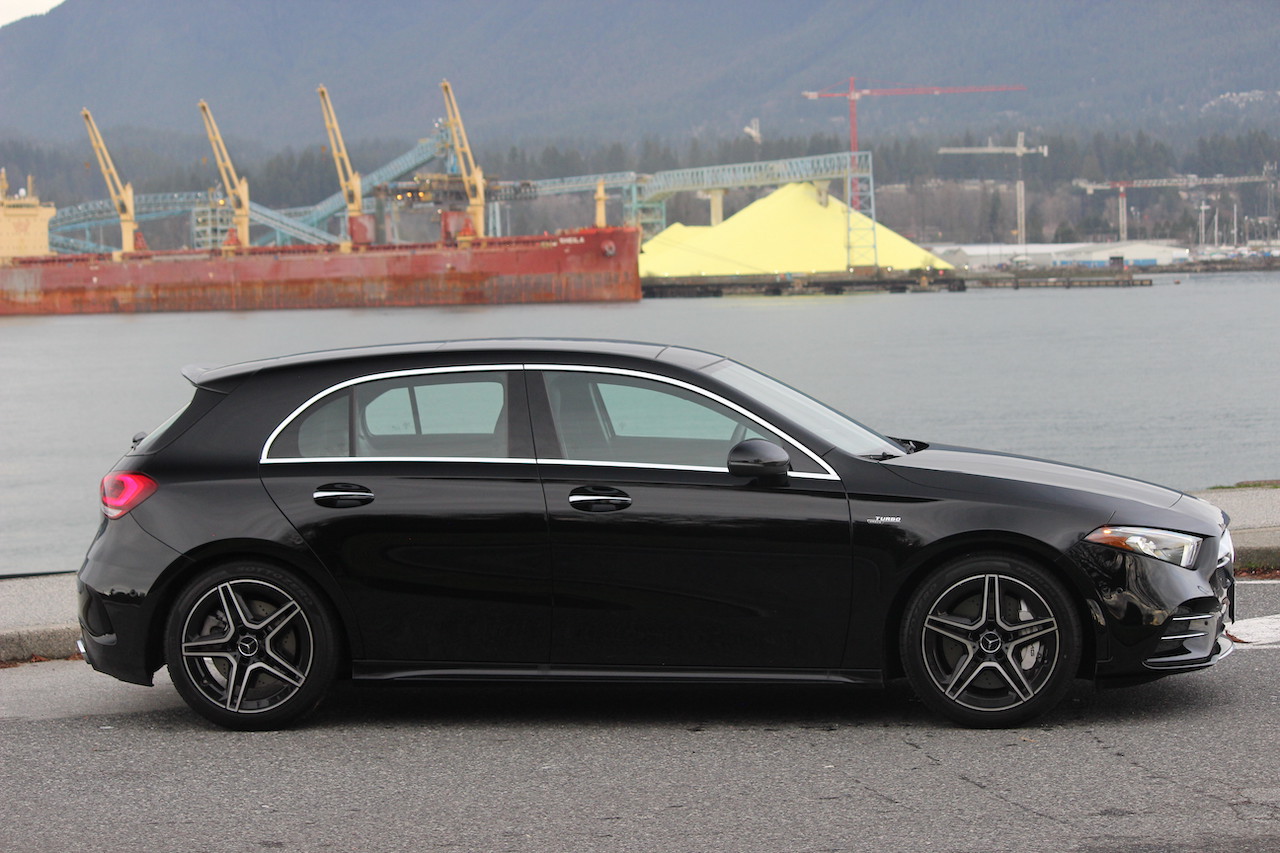 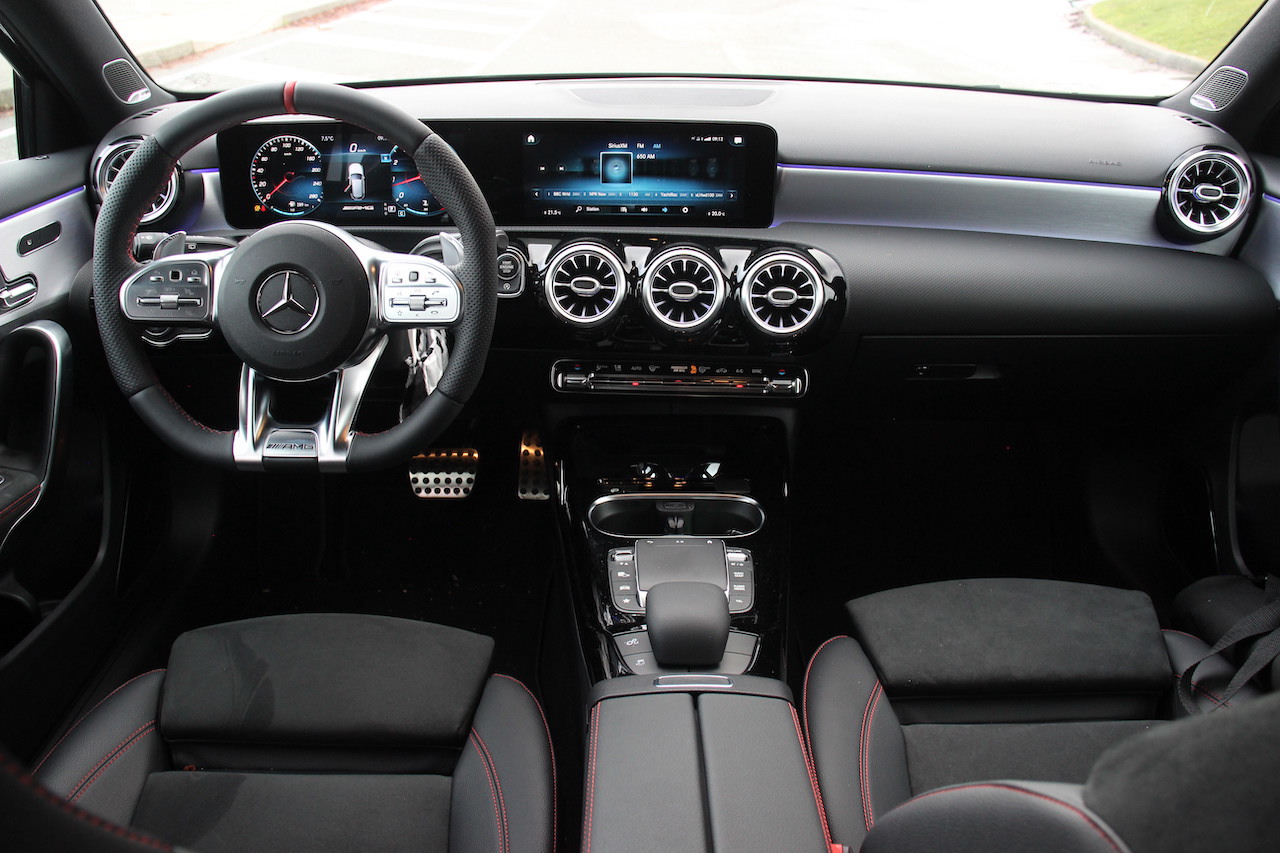 The dash is made up of two 10.3-inch displays for the gauge cluster and infotainment display. The gauge cluster can be configured five ways, all providing different colours and gauge alignments – I rotated between “Classic” and “Sport” as I preferred their traditional two-gauge set-up. “Supersport”, meanwhile, has it looking like something out of a touring car – a bit too on-the-nose for me. A touch-sensitive thumb pad on the left-hand wheel spoke that does take a little getting used to navigates the gauge cluster menus. The pad on the right spoke, meanwhile, operates the infotainment display but you can also navigate that with a touchpad and the display itself is a touchscreen.

The infotainment display, meanwhile, has even more “modes” to choose from (as well as Apple CarPlay and Android Auto) that change everything from the interior ambient lighting, to the audio system; Lounge mode, for example, douses the cabin in shades of neon blue and pink and automatically turns on the audio system. Cool, but a bit weird if the last station you had it on happens to be talk radio; not that “loungey”.

That’s all well and good, but I still find the system gets hung up when it comes to navigating your radio pre-sets. It’s often hard to tell whether you’re in your favourite list or just the general station list and often this would make it seem that certain stations just disappear off the station list. Just give me a tuning knob if you could be so kind, Mercedes.

This being an AMG model, that central display can show a lot more than your navigation screen or radio selection; if you select the AMG Driver’s Package ($2,500), it provides a suite of apps that allow you to track your lap times on some of the most famous tracks in the world. If your favourite track isn’t in the database, you can add it basically by going to the track, hitting “record” and taking it ‘round for a lap. Pretty cool stuff.

Of course, while some A 35 drivers may spend time at the racetrack, most of them will be using it more as a daily driver and it’s suited for that work just fine. It is compact, so I wouldn’t call it “roomy” but the interior is spacious enough even for larger folk like myself – how they managed to find that much room in the rear seat is truly a masterclass in interior packaging. The rear seats are a little flat, though, which makes folding the setbacks easier, but I worry would be a little slippery for occupants as the road gets more serpentine. 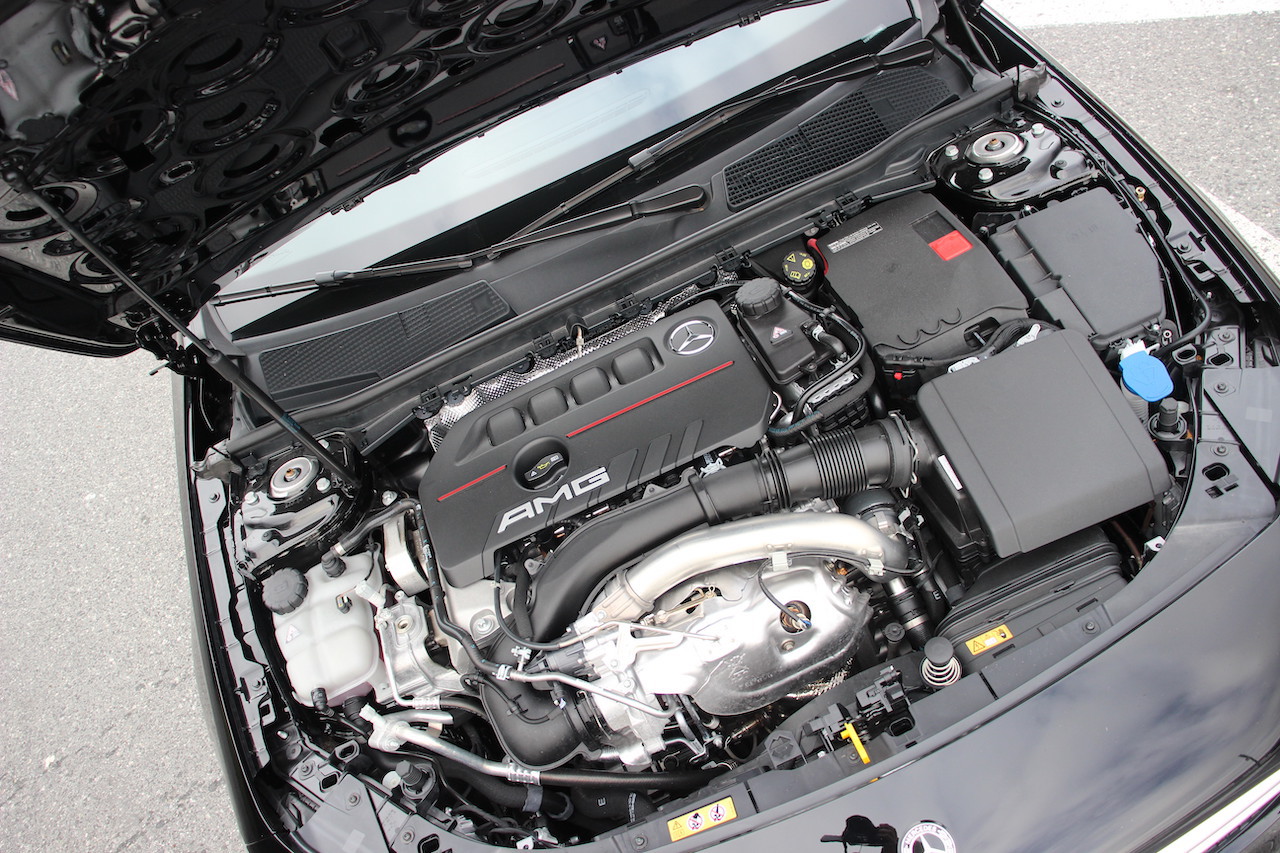 Power from the turbo 2.0-litre four-cylinder is rated at 302 horsepower and 295 pound-feet of torque, fed through a seven-speed dual-clutch transmission to all four wheels, so this is a car that loves to accelerate.

It’s felt as soon as you tip in; at 1,555 kilos, the A 35 is not a heavy car – even with 4Matic AWD — and it leaps off the line with gumption especially if you’ve set it to one of the more aggressive drive modes.

Once at speed, meanwhile, that close-ratio ‘box means that when it comes time to muster some grunt for highway passing – or just for a spot of mild hooliganery on an empty mountain road – there’s always power in reserve, ready to make itself known with a nifty note from the A 35’s dual exhausts.

When it comes time to harness all that power, meanwhile, the grippy brakes are up to the task at can get the job done from everyday speeds in short order – not only does the low weight help with accel, but with decel, too.

As zippy as that powertrain is, though, the way the A 35 handles is its true party trick. Left-right-left transitions result in very little body roll, heavy braking results in just a modicum of dive and there’s so little squat under acceleration that you really do have to wonder if there’s a gap between the body and rubber. There is, it’s just that it’s quite firmly sprung making for some fantastic tractability. Thing is, there will be those out there that might find it just a little too firmly sprung, especially for city work where railroad crossings and other urban imperfections will cause a shiver through the body and chassis. Such is the price you pay, I suppose, for such great performance through the twisties. However: the AMG Driver’s Package does provide three-stage dampers, and that might help smooth things out as the goings get rougher. 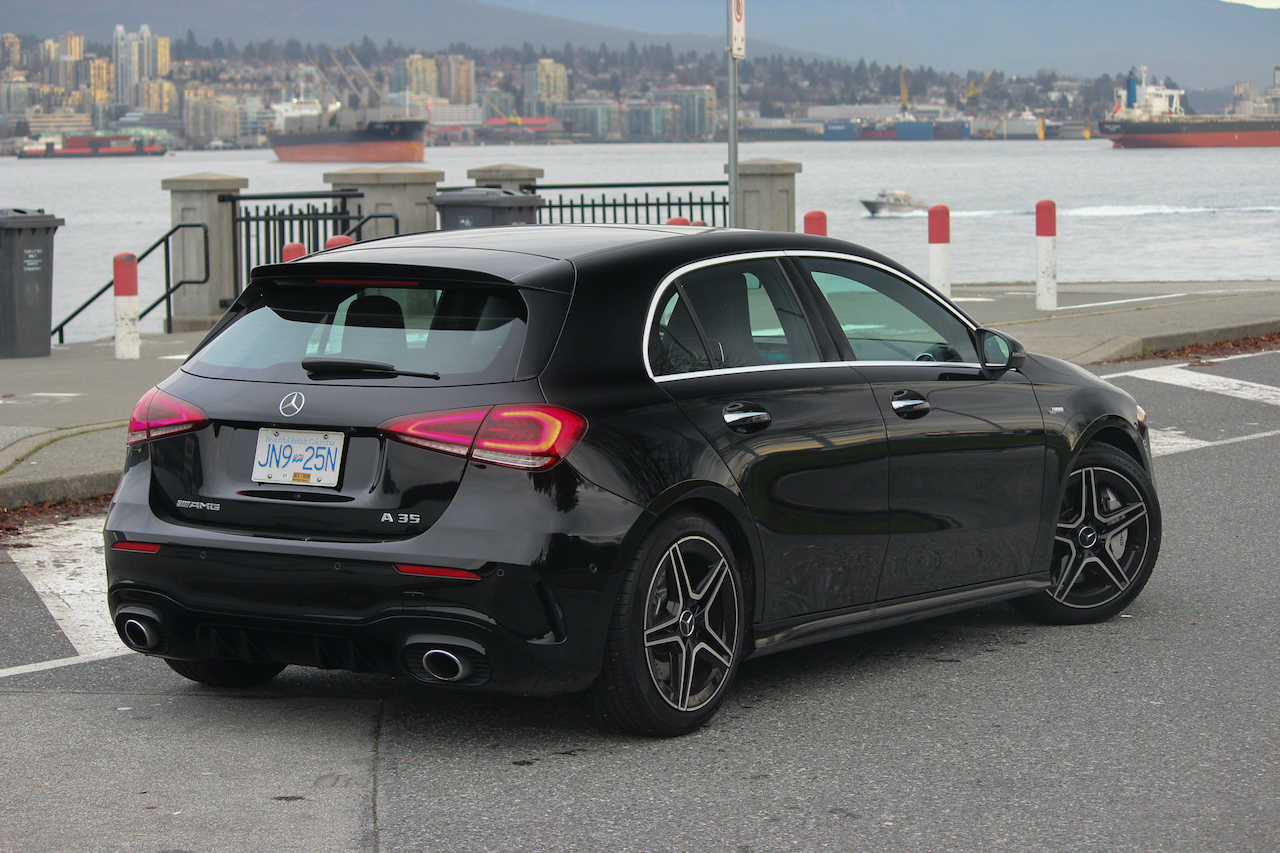 Not much else to complain about, though. The A 35 is a cracking little car that will put much larger, flashier rides on notice – it punches above its weight class, and you have to like that. 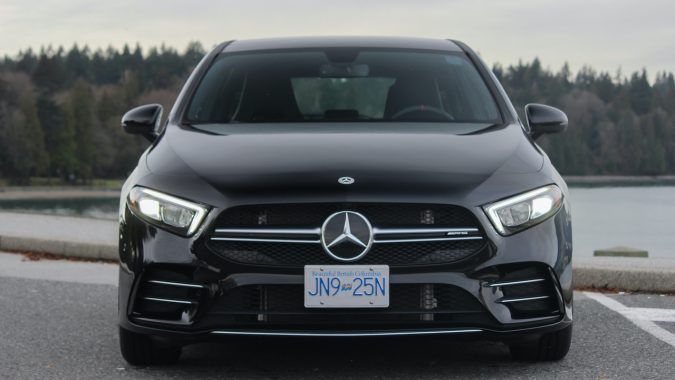 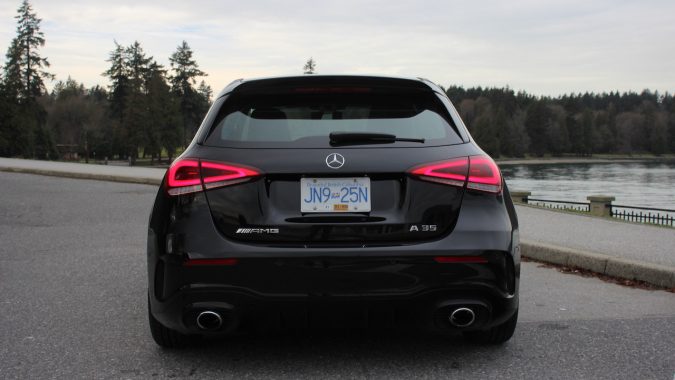 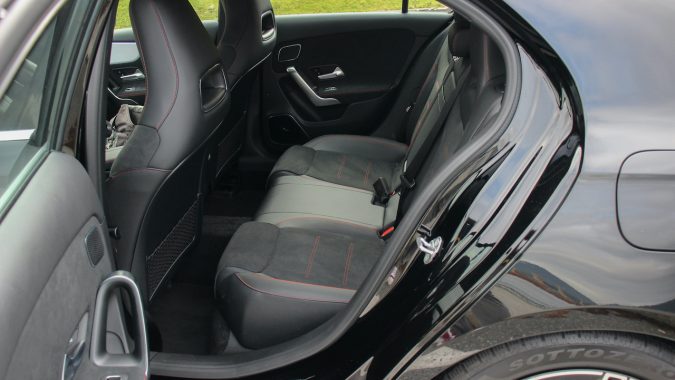 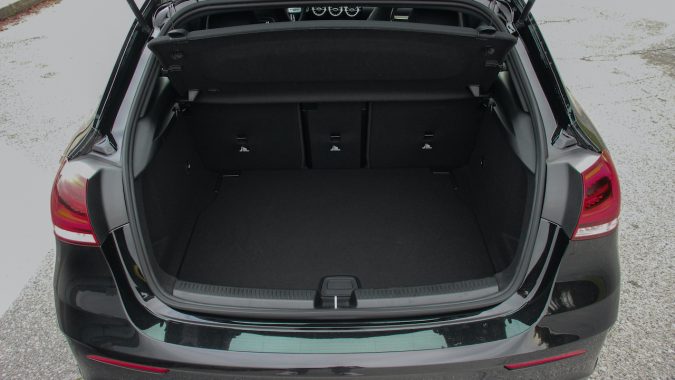 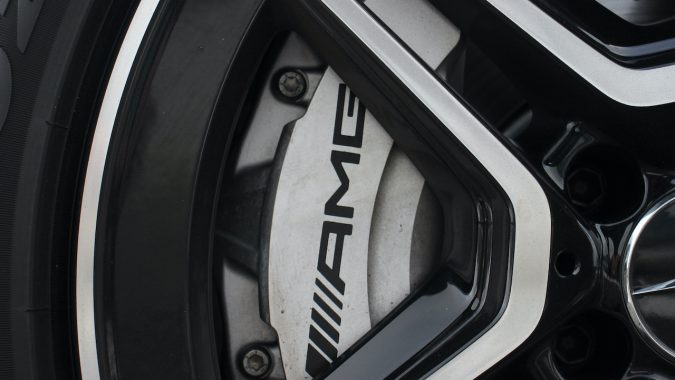 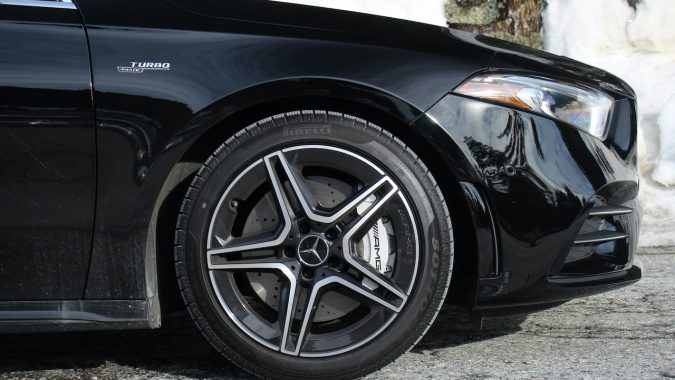