When you talk about Lexus, you have to talk about the LS. It’s the model that launched the Lexus nameplate in North America, establishing a brand which stood for luxury, refinement, technological advancement and reliability. These classic LS 400 cars are the million-mile Lexus’ that we see on YouTube today.

Back in 1990, the Lexus LS wasn’t just the best that Toyota could do. It was the best that anybody could do. While many scoffed at Toyota’s ambitions to take on the best of American and German luxury, the sale figures and the meteoric rise of the Lexus nameplate spoke for themselves.

Fast-forward 30 years and the landscape is a little bit different. The smaller IS and ES models have moved in to service the audience of the old LS 400. The new LS 500, meanwhile, is a car designed much more to be driven in than to drive yourself.

The Lexus LS 500 is no longer a blue-collared, hungry challenger in its class. It’s a pompous, fat and happy cruiser for the leisure-class. Don’t believe me? Check the MSRP.

There is some good news in the form of the LS 500’s power plant. It’s Lexus’ familiar 3.5-litre DOHC twin-turbo V6 that features every internal combustion advancement known to man. This includes a sophisticated variable valve timing system as well as both port and direct fuel injection. A hybrid variant is also available.

The result is an engine that accelerates with all the drama of a dentist’s waiting room and gets reasonable gas mileage (unless you start to feel your foot getting heavy). But best of all is that the LS’ engine produces a very buff 416 horsepower and can usher you to 100 km/h in roughly five seconds. Not bad for a car that weighs almost 5,000 pounds.

I often criticize vehicles for not having a sense of joy. And in that category, I actually have to hand it to the LS 500. Despite being a vehicle which Lexus describes as prioritizing, “comfort, quietness and craftsmanship” which “have been elevated to a new level of refinement”, the LS 500 still manages to get up your nose a bit.

It’s a boat. But it’s a speedboat. Flick the switch into the Sport + setting and it’s not exactly a sports car, but it does get a little naughty with sharper steering, stiffened suspension and more immediate throttle response.

You won’t be carving up any corners or easily navigating a parking garage with the LS’ 12- inch wheelbase. But the ride is expectedly exquisite (even on snow or gravel), and road noise is minimal. 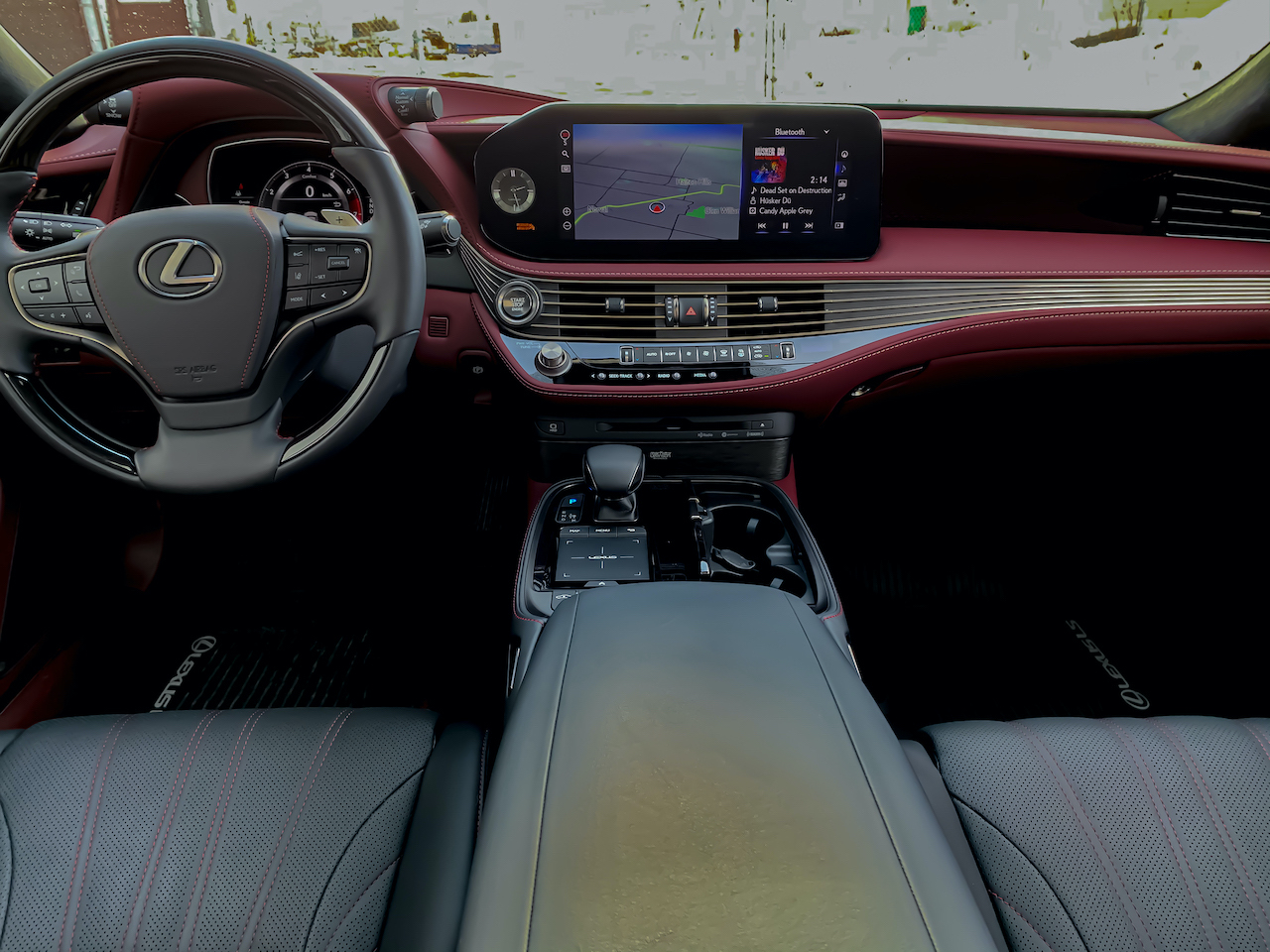 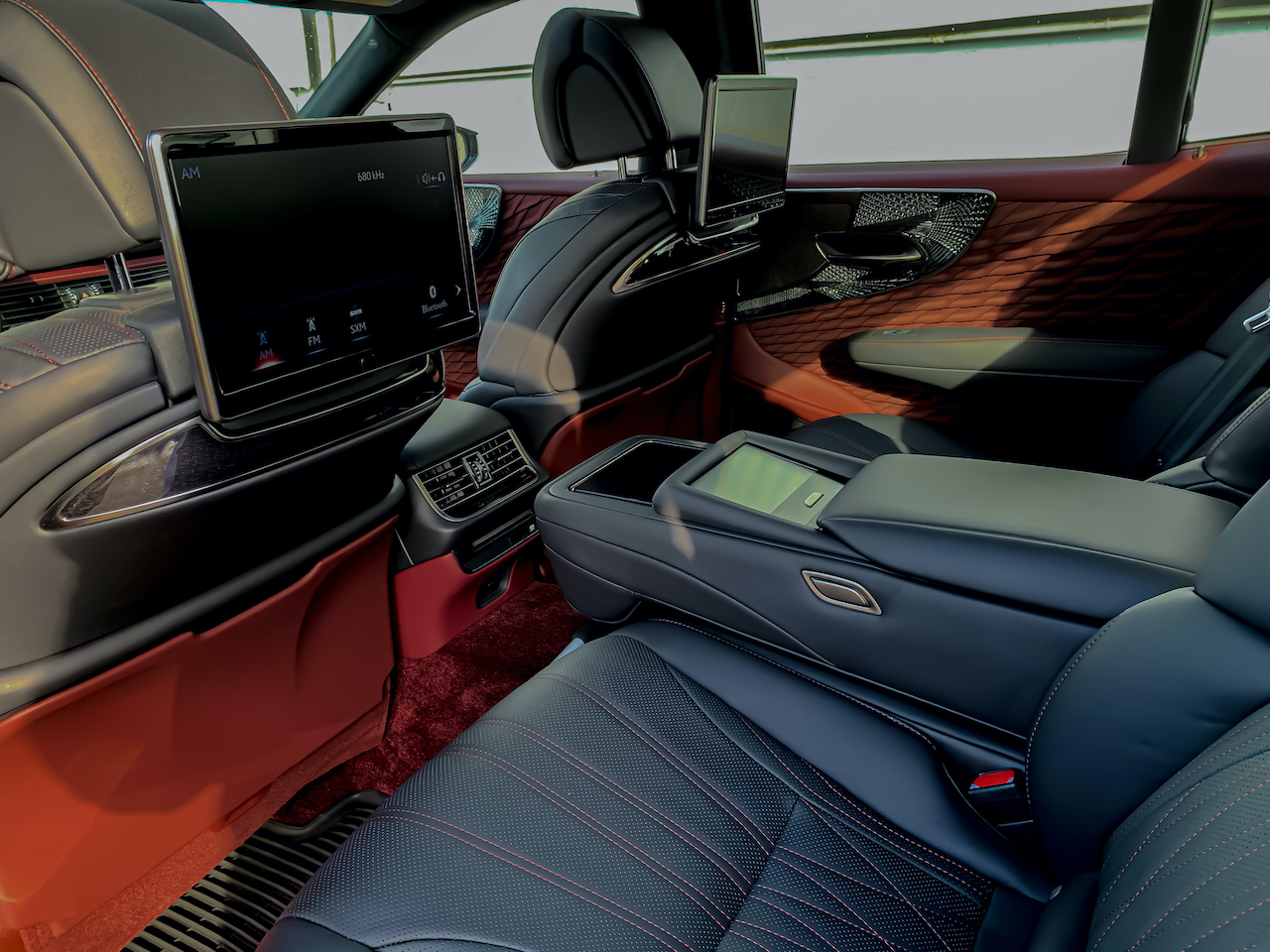 One look inside the car will prove my point. Everything is awash in red-leather and suede, and looks as if the designer took their main inspiration from the VIP booth of a King St. nightclub.

Mounted behind the front seats are two screens connected to a BlueRay entertainment system, complete with HDMI inputs and audio jacks. In the centre of the rear seats is a touch screen featuring climate, entertainment and comfort controls. You also get an absolutely massive 39 inches of rear legroom. It is sincerely nicer than sitting in first class.

I suspect that Lexus knows that most people who buy the LS 500 are buying it to be driven around in. There’s simply no other explanation for this kind of lavish rear passenger comfort.

If you do find yourself employed as the driver of someone who owns a Lexus LS 500, you’ll be pleased to learn that the LS has adopted the touchscreen for 2021, so that you don’t have to navigate with a mouse or touchpad or any other such nonsense.

A touchpad is included, but mercifully, the LS features a healthy dose of analogue keys for the climate control and audio selection. There’s also a few quick keys surrounding the touchpad for quickly navigating through the touch screen’s many, many menus.

Speaking of audio, the Mark Levinson premium sound system, with its 23 speakers is an absolute banger (it bloody better be for $140K), so you’re in good hands there. 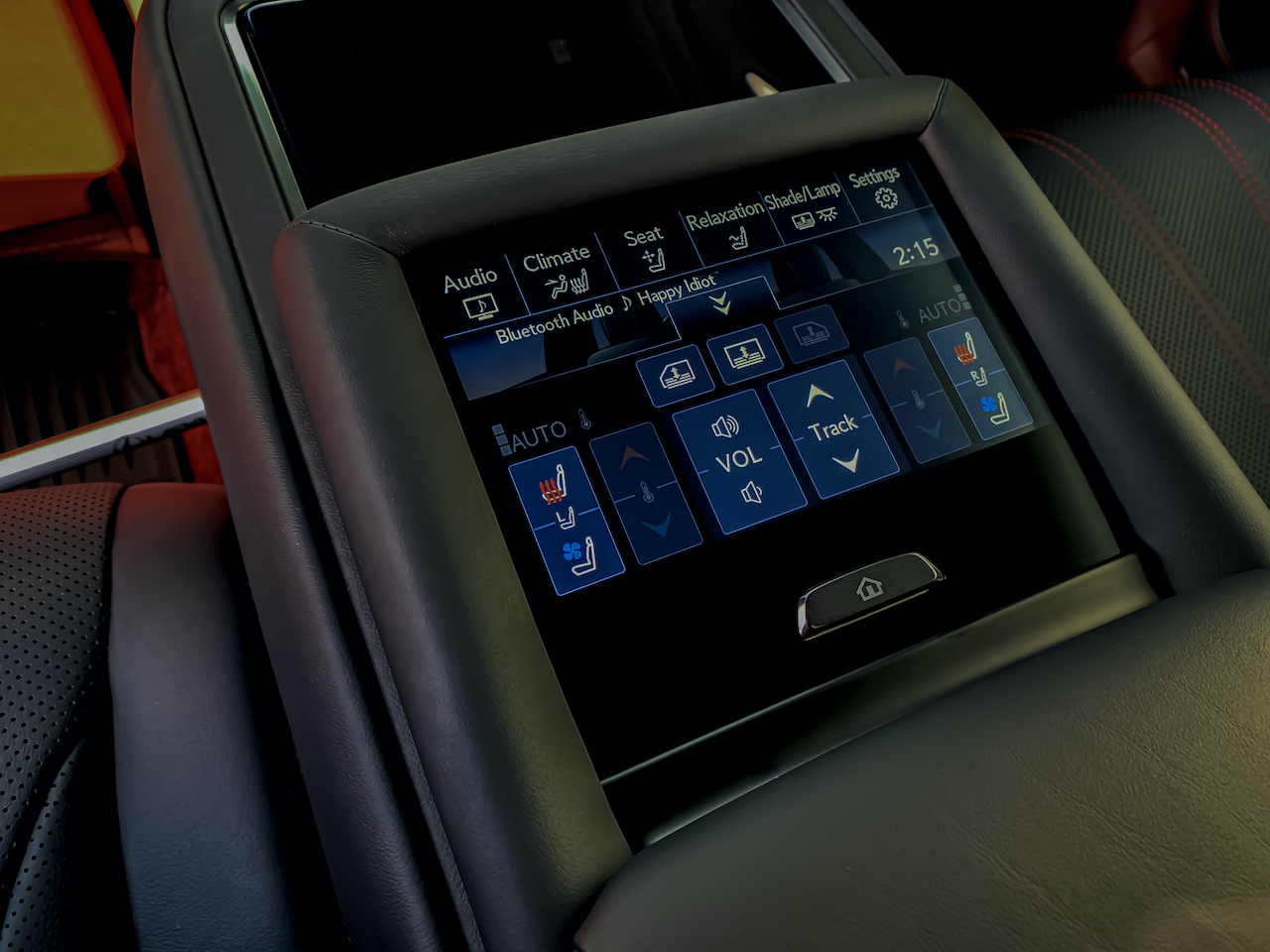 Now, you might find the LS 500 a bit difficult to park in your boss’ private underground garage. Thankfully, the LS 500 features a number of park assists including a backup camera with a back guide monitor and something called an “intelligent clearance sonar” which creates a little top-down 3D model of your car navigating its space. It’s helpful for gauging the distance in a turning radius or navigating around obstacles.

A cross-traffic alert will urgently alarm you of vehicles crossing your path while moving and the world’s most gentle lane-departure assist will keep you from having to slam on the brakes, which would of course spill your boss’ artisan double-cafe-half-sweet mocha latte.

And those are all just the standard options. Our as-tested model came equipped with the “Executive Package”. It’s a quaint little option that will set you back $25,650 for basically a moonroof and some massage units built into your seats. That’s more than the price of a standard VW Golf. Just want to put that out there.

And the answer is, “Not if you’re the one driving it.”

Despite the horsepower and the refinement, it’s not really all that much better to drive than a Lexus IS. Definitely not an ES. 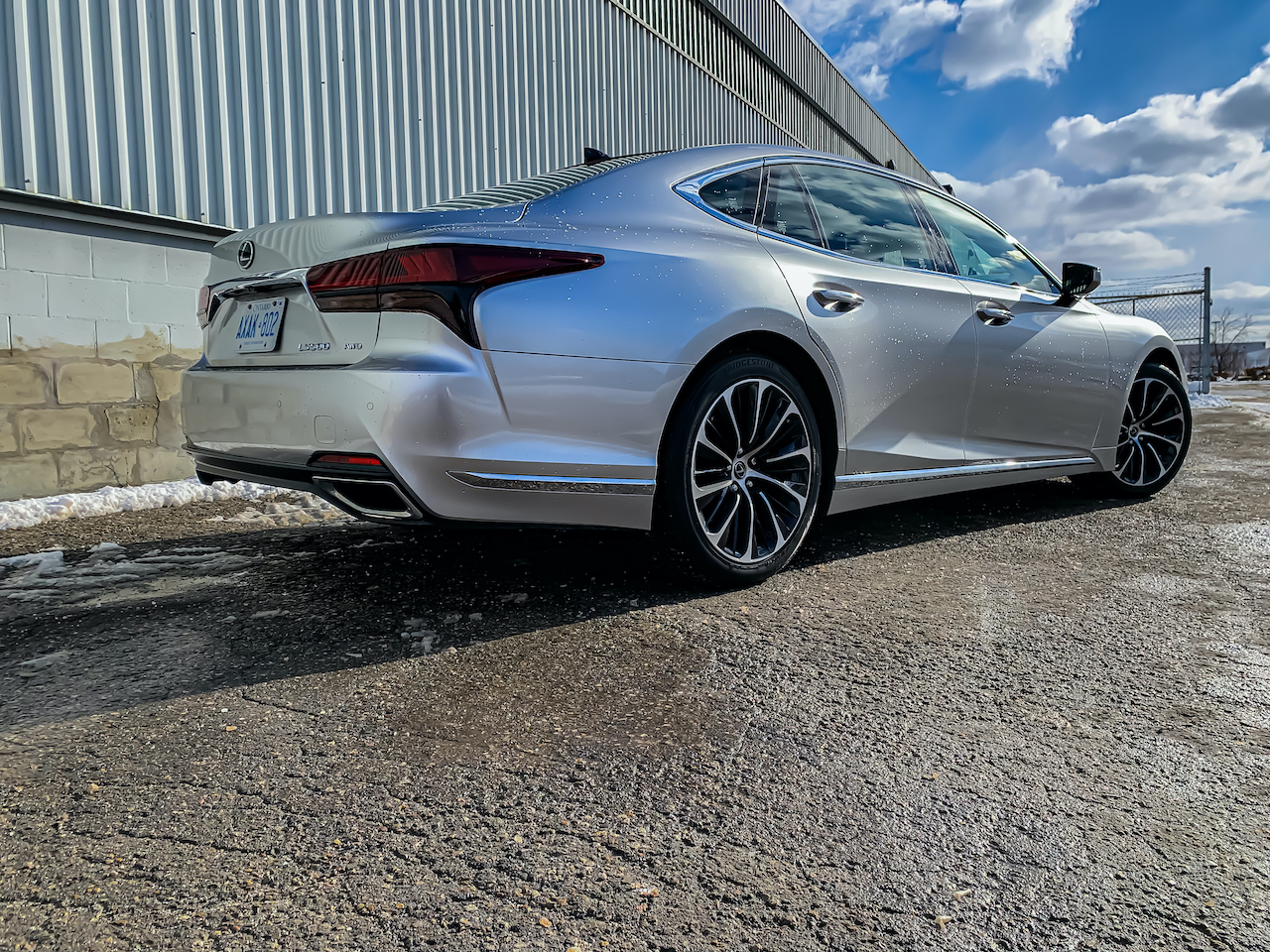 If what you’re looking to do is blow over $100,000 on a car with four doors that goes like hell and which you’ll enjoy driving, there are so many BETTER options for you. Porsche Panamera. Tesla Model S. Dodge Charger Hellcat Redeye (if you’re someone who isn’t boring at parties).

But if you can afford to hire a driver, then $140,000 is a totally moot point. What you want is to review your PowerPoint presentation while getting your ass massaged on the way to the office. Driving is the furthest thing from your mind.

And if that’s the case for you, then I would recommend the Lexus LS 500 because it’s unbelievably refined, tastefully understated (on the outside) and will probably prove to be more reliable than its competition.