Lexus makes one small change that lets the rest of the highly updated car shine.

Lexus has made one change for 2021 that doesn’t make a bit of difference to how the new IS 350 drives but does everything to make the driving experience a better one. It could make the rest of the car feel dated, but instead removes a massive frustration and lets much more of the car’s inherent talents shine, boosting its status as one of the last affordable sports sedans.

We’ll get back to that change, though, because Lexus has made some other improvements to the IS 350 for 2021, with the most obvious also the most subtle. Rather than a simple new grille and rear bumper, this is an extensive rework. The new grille is wider and sharper, and while the Lexus Spindle doesn’t work on every model (sorry, old NX), it is excellent here, conveying a sense of aggression that extends into the hood. The rear doors have been sculpted to make the rear fenders look wider – they really are wider, but this enhances it – and smaller taillights that span side to side complete the look.

The big change we’re talking about is inside. Lexus has moved the screen 80 mm closer to the driver, made the screen a larger 10.3-inches, and – here’s the best part – made it a touchscreen. Adding touch functionality makes a world of difference, as does adding Android Auto to complement Apple CarPlay, letting all modern phone users have proper integration. 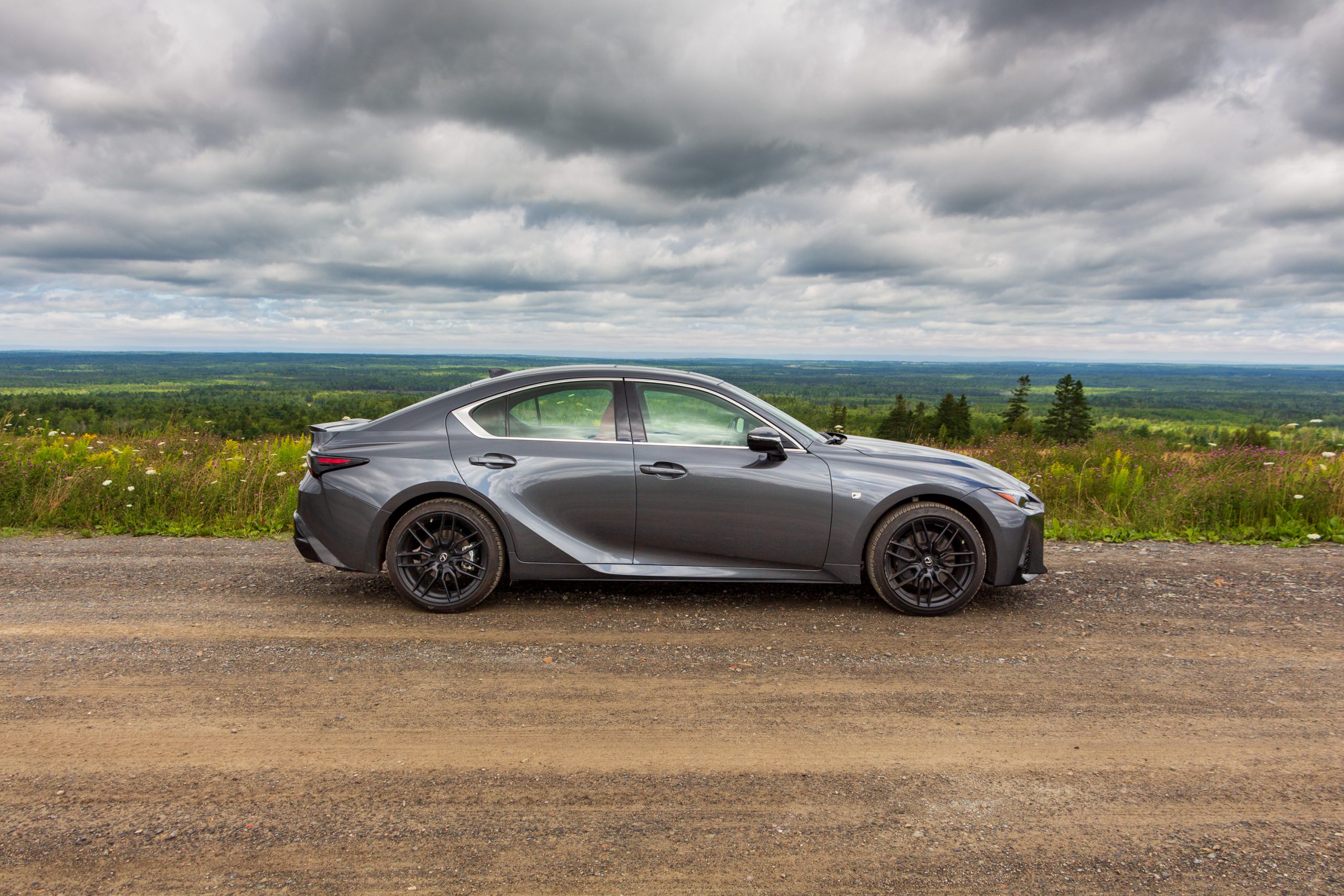 Lexus has kept remote touch, knowing some buyers prefer the haptic trackpad, but the touchscreen is a revelation. It makes the system more user-friendly, works much better with phone integration (some Android Auto and Apple CarPlay features were previously inaccessible), and makes the remote touch pad better to use because in certain situations it was a better interface. As Goldilocks would say, this one is just right. The rest of the interior is surprisingly large for the class, and the front seats pass the Does Evan Fit test. 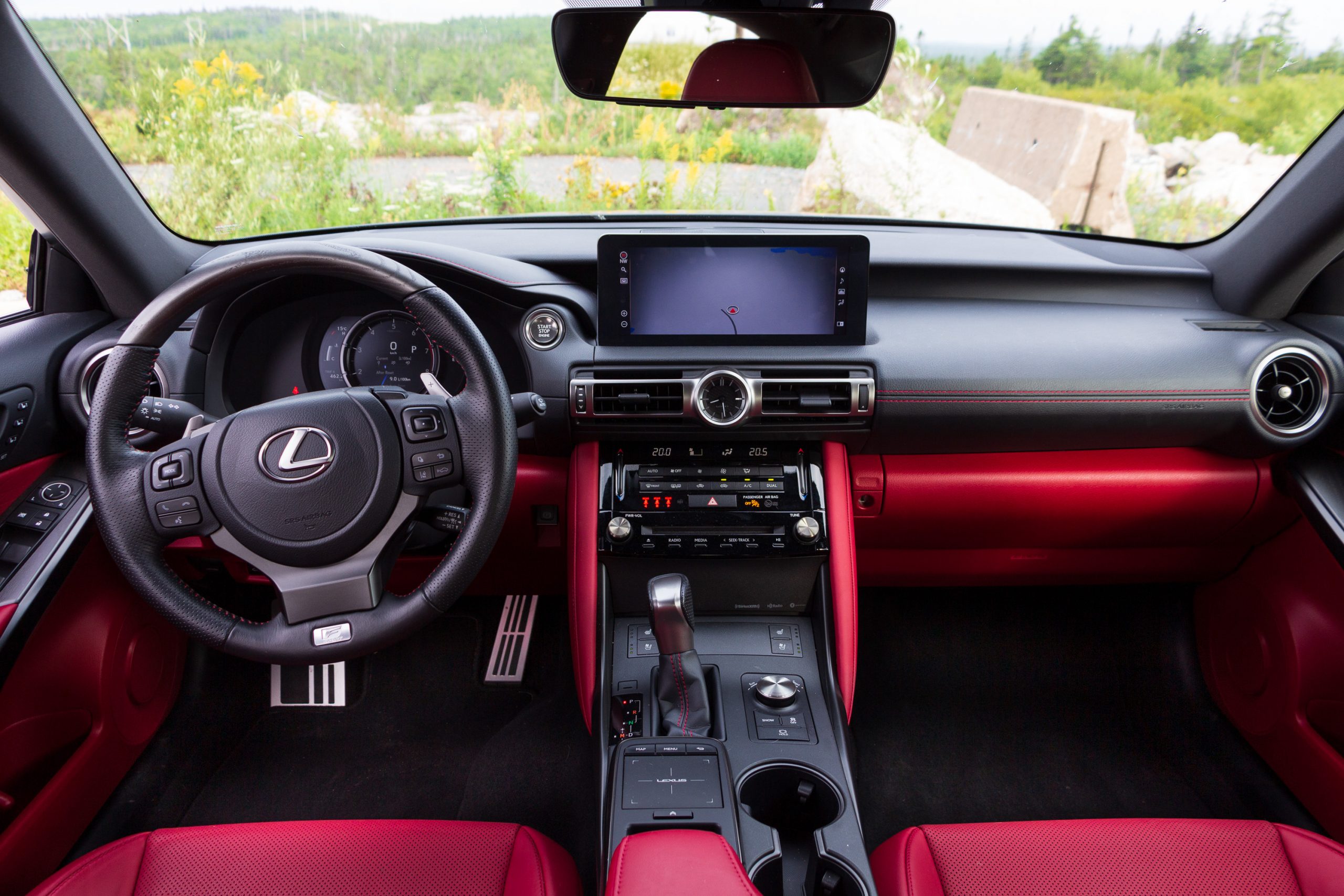 Not cursing out a fiddly radio lets the Lexus driving dynamics shine. This is an F Sport Series 3 version of the IS 350, and that makes it the sharpest IS of all. All-wheel drive backs the 3.5L V6 (and is the reason for the giant hump where the driver’s heel should go), and F Sport 3 means adaptive variable suspension. 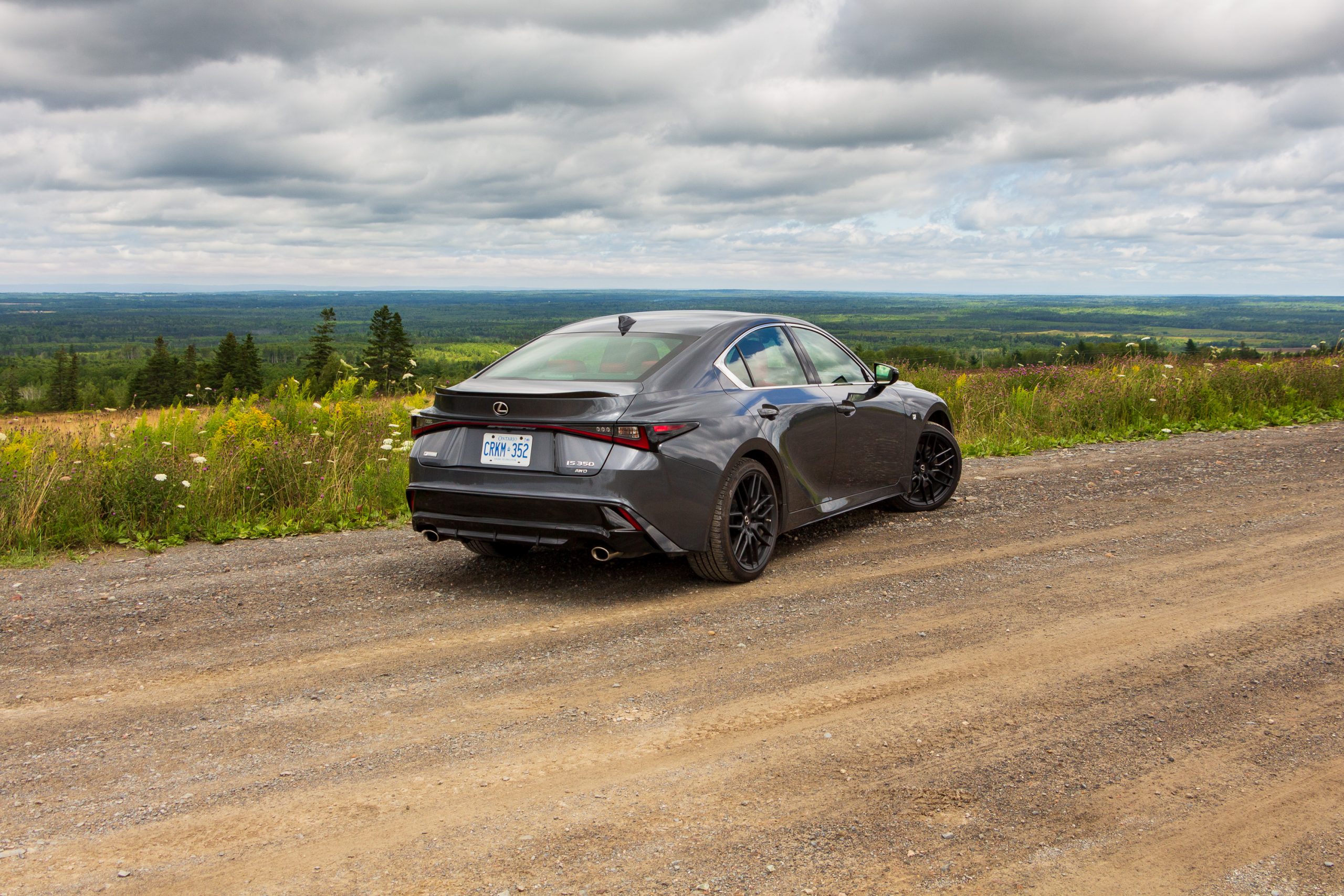 The president of Toyota himself, the man who has his name on the building, said that the IS is the car that taught him what performance driving was. I may not have shared that view last year, but this one raises the bar. Extensive reinforcement under the skin helps the suspension do its job with minimal intrusion. The 19-inch wheels were fitted for the first time, and that meant relocated suspension mounting points and improved geometry. How serious were the engineers? Lighter wheel bolts shed two whole pounds. A tiny difference, but the devil, as they say, is in the details.

Even with those large hoops and tiny sidewalls (with lighter BBS 19s on F Sport), this car has a ride that would do the LS sedan proud. Come time to point it at the twisty bits and toggle Sport + (exclusive to F Sport) for sharper engine and transmission mapping, stiffer damping, and more steering weight and this car feels unlike any other current Lexus short of the LC.

The IS 350 is now a legitimate sports sedan, not just a looker. Roll is minimal, the steering response is crisp, and anything short of a speed bump in the middle of a corner might as well not be there as far as the dampers are concerned. You’ll hear a thump from the road, but the car is unflappable. It’s been a long time since a Lexus encouraged me to toss it down a back road, but this IS does just that. The 1970s Cadillac red interior doesn’t hurt either, because it’s so over the top that it’s impossible not to love. Or at least not to imagine the meetings of stodgy executives where a sharp-dressed designer refused to budge on this swath of synthetic hide. The open-pore wood wheel should wear in wonderfully as well.

While they were in there, Lexus updated to Safety Sense 2.5+. This makes the adaptive cruise work better (like speeding up to pass as soon as you signal) and adds better pedestrian and cyclist detection. 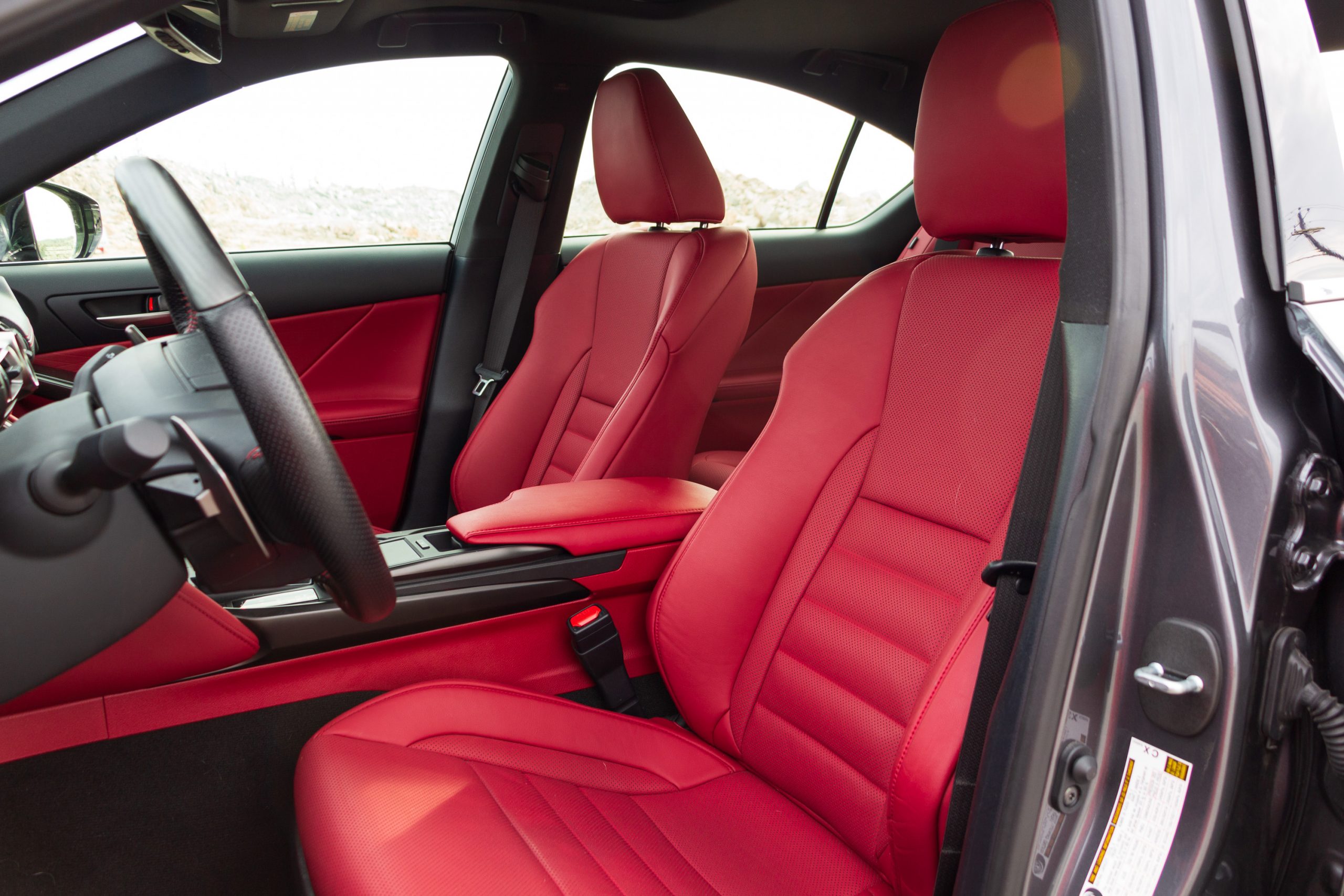 Under the hood is the 3.5-litre V6 that Toyota puts in nearly everything, here making 311 hp. In a world of small-displacement big-power turbo engines, this sweet-spinning V6 is a joy even if the soundtrack is fake and controlled by a dial by your left knee. Power everywhere and happy to rev, this engine loves a workout. The six-speed automatic is beginning to show its age, however. Not just in the spaces between gears when compared with its competition, but in the shifts themselves. A firm snap into the next gear is great when you’re pushing hard, but a prolonged clunk in a parking lot or at a yield sign as you wait for forward movement is not. This one delivers both.

Lexus is also leaving you one particularly tough decision when it comes to the IS. You can get an IS 350 with the F Sport 3’s suspension, wheels, and carbon spoiler, but you can’t get it with the absolutely lovely 1,800-watt Mark Levinson stereo. To upgrade the lacklustre stock system, you have to get the IS 300 AWD with just 260 hp from 3.5-litre and then pick the Ultra Luxury Package. It’s an odd decision and seems like a missed opportunity for Lexus.

With the number of mid-priced performance sedans dropping by the year, the competition for the IS 350 isn’t what it once was. It’s still a tight crowd, though, even if the Germans, have all priced themselves well above this class now. The IS offers a strong value and a Lexus badge, but, more importantly, it’s genuinely fun to drive. Thanks to the new touchscreen, you can spend more of your time in it driving.