All sizzle, no soul.

After only a few short years of production, the Kia Stinger is plagued by rumours of cancelation.

The Stinger initially signalled a great deal of promise for the Kia brand back in 2017. It was supposed to be a flagship example of a new, exciting generation of cars from the South Korean automaker, offering similar performance and luxuries as the big dog rivals from America and Germany at a competitive price. It’s muscle car-inspired styling certainly looked the part and with over 360 horsepower on tap, the specs looked good, too.

Former BMW M vice-president of engineering, Albert Biermann, also helmed the Stinger’s development so the expectation of a proper driver’s car was not unfounded.

It wasn’t as if customers weren’t willing to give the Stinger a shot just because of the Kia badge. 16,806 Stingers were initially sold in 2018 in North America. Not bad. But things have only declined from there, with some months hitting numbers as low as 750 units in 2020, a number which has not been eclipsed so far by any month in 2021.

Customers have had a taste of the Stinger and simply aren’t buying it.

You can almost sense the frustration of Kia as they begin to toss everything but the kitchen sink at the 2021 Stinger. In the Canadian market, the only variant available is the most powerful 3.3-litre twin-turbocharged V6, AWD GT model, and ‘Limited’ trim levels offer the kinds of equipment and options normally reserved for up-scaled BMWs and Audis.

They’ve even created a special orange version, the GT Limited Neon Orange (our as-tested model), perhaps in an effort to excite the kinds of buyers normally attracted to Dodge’s maniac muscle cars.

So what’s the problem? Why is the Stinger failing to attract new buyers? 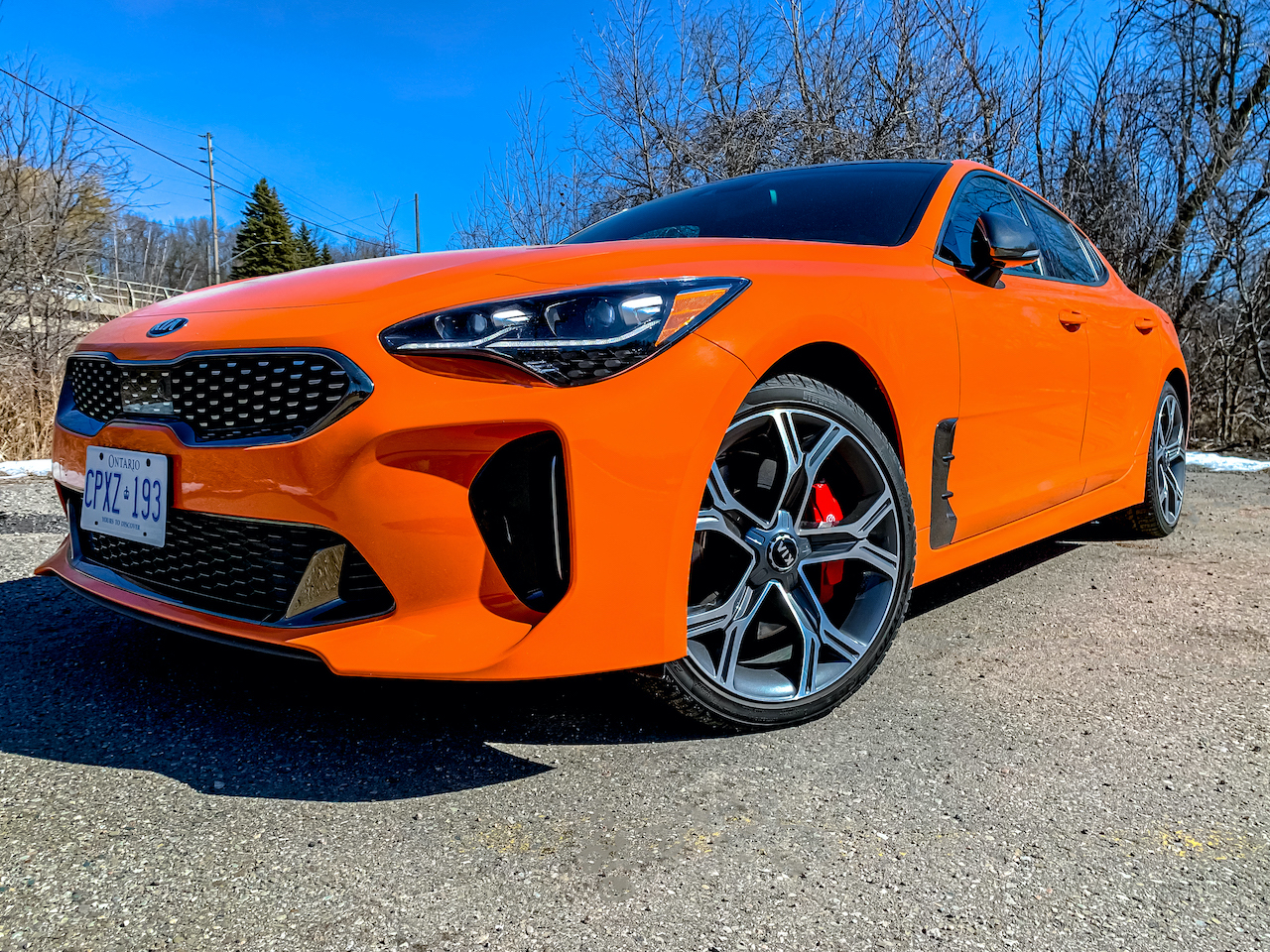 It certainly isn’t the options list. The Stinger may very well be the most thoroughly equipped car for under $60,000.

Does the quality feel up to par as anything you get in a Lexus or BMW product? Not even close. Everything feels a little like a knock-off handbag. The dash may be leather wrapped, sure, but a quick visual inspection will tell even a layman that the quality of the leather is a poor, top-grain — like you might get on your average pair of sneakers. Also the aluminum finishes conjure up images of old DVD players from 2003. It all feels very dated and uninspired.

Will the average buyer who doesn’t review cars for a living notice or care? Perhaps not. But I can’t shake that “fake Rolex” feeling when I interact with any of the Stinger’s surfaces.

One area where there are no complaints are in the infotainment system. Apple CarPlay and Android Auto smartphone integration are standard. So is a wireless smartphone charger (which is quickly becoming my favourite equipment option in all cars).

The Limited models offer a 15-speaker Harman Kardon premium audio system, which is about as good of a sound system as I’ve ever tested in a car. Fidelity is great even at high volumes and the bass pulses are enough to shatter your skull.

The equipment list just goes on and on from there. Dual-zone climate control, heated and vented seats, a heated steering wheel, drive mode select, a 12-way power adjustable driver’s seat, and the giant rear hatch can be opened remotely. 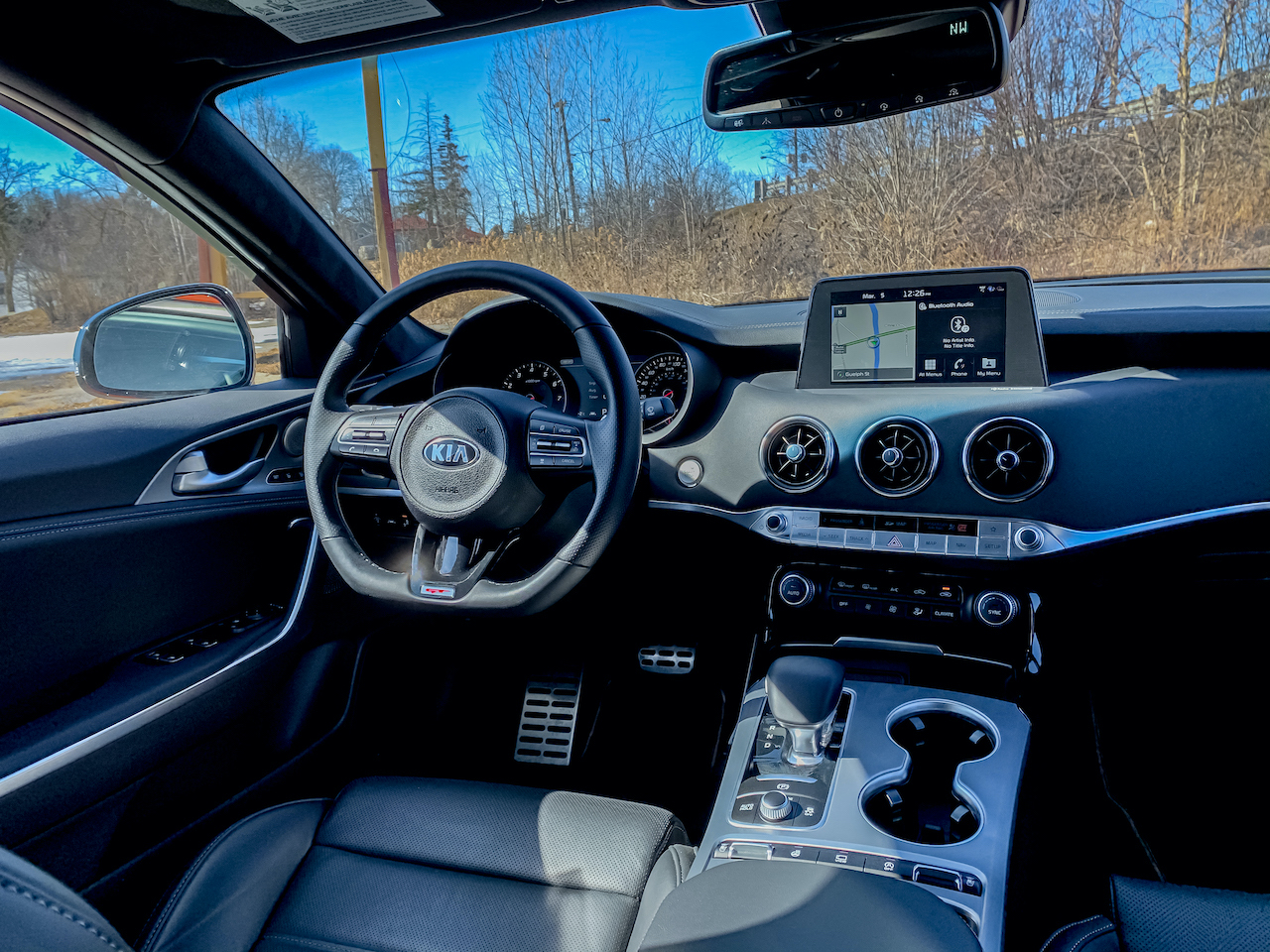 Kia’s “Advanced Smart Cruise Control (ASCC)” is some of the best radar guidance I’ve tested, so is their “Lane Keep Assist System (LKA)”. Together, the systems work to make long highway cruises effortless, boring even. You can actually forget that you’re driving the car.

The Limited models also come with power adjustable driver’s seat bolsters, which will adjust to hug you close when you engage Sport Mode. It feels a little like having your blood pressure taken at a drugstore, but really helps to set the mood for aggressive driving.

Cross-traffic alerts help make lane-changing a stress-free experience, but for my money, the Limited’s 360° camera monitoring system is the real safety highlight. It makes navigating tight parking garages a breeze and is an option I had only previously experienced on a $140,000 Lexus.

To say the Stinger is “well equipped” is understatement. There’s certainly no issue there, especially when looking at its direct competition.

The problem, I believe, is the performance. Not on paper – but in practice.

The 365-horsepower V6, coupled with an 8-speed automatic is enough to launch the Stinger to 100 km/h in roughly five seconds — and there are tales of magazines breaking into the sub-five second range with the right tires and driver.

The twin-turbo system helps to serve up its 376 lb-ft almost instantly, so throttle response feels immediate in Sport Mode.

It brakes exceptionally well thanks to 4-piston Brembos up front and 2-piston Brembos in the rear. Grip feels essentially endless and the Stinger’s cornering abilities beg belief thanks to its MacPherson struts and gas shock absorbers with dynamic dampers (whatever the hell those are) in the front and a trick multi-link suspension set up in the rear. 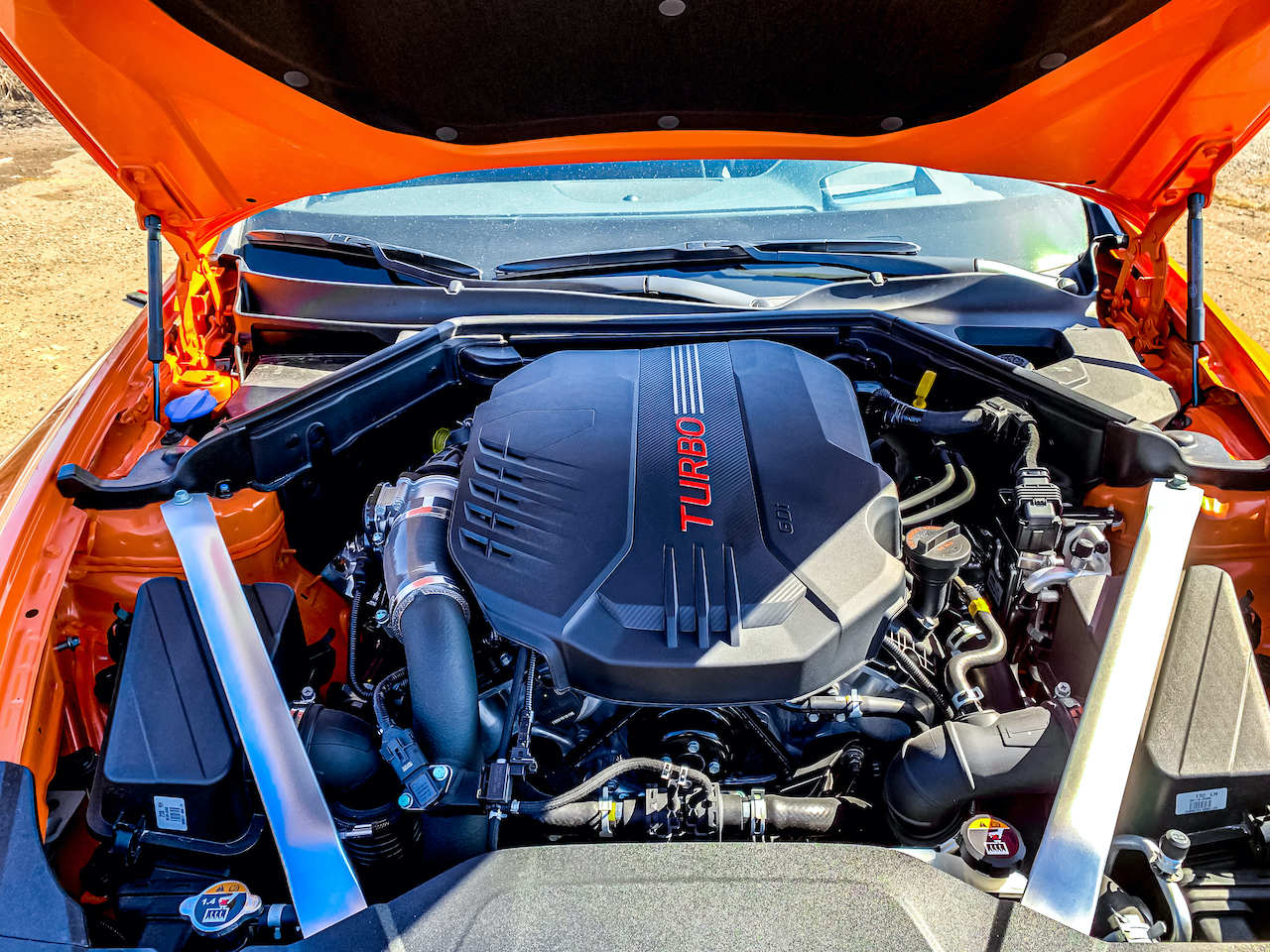 The Stinger is an incredibly well sorted, well-balanced machine. In fact, it’s too well balanced, too well sorted.

There’s no drama or sense of danger to taking a corner faster than you think you should. The grip never runs out. The car figures out all the steering vectoring for you. The tail never slides out. The engine distributes all the power in exactly the right way to factor out the terribly long wheelbase. There’s nothing analogue or kinetic about driving the car. It just goes about its business, never really making you feel like an essential part of the process.

I never really bought the whole “feels like a video game” argument with any car, until I drove the Stinger. It feels like driving a math equation, where there’s no room for improvisation.

“But what about that acceleration? Isn’t that exciting?” Honestly? Not really. Five seconds is plenty quick, sure enough. But with the engine mounted low and close to the firewall, and with so much chassis stiffening there’s really no sense of drama – especially after the torque runs out around 4,500 r.p.m.

The 365 horsepower simply isn’t enough to really thrill you in a car that is this over-engineered and this heavy.

There are two cars that I think offer a huge problem for the Kia Stinger GT. They are the Honda Civic Type R and the Dodge Charger R/T.

Both cars cost roughly the same money to buy. Both offer similar levels of practicality. Both offer similar levels of acceleration. Both are fairly well equipped — perhaps not as well as the Stinger, but certainly nothing you would really miss. And both cars are so much more fun, interesting and engaging to drive. The Type R allows you to tear through gears as its high-end turbo boost pulls you through the corners and the Charger rears up, snorts, and fills your ears with HEMI goodness with any jab of the throttle. 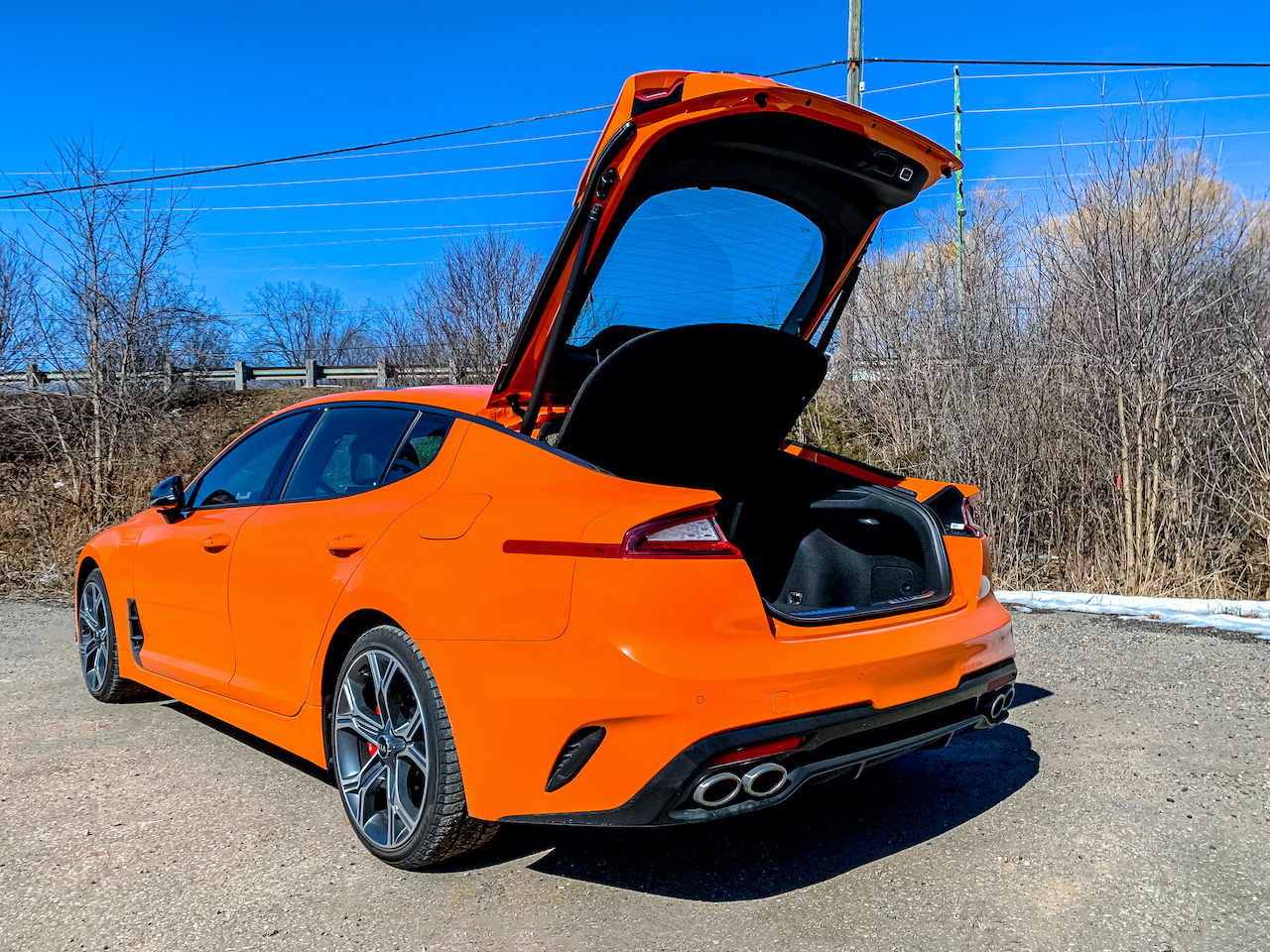 The Stinger is like a really talented musician — a guitar player who, through practice and determination, has learned all the most challenging solos, riffs, scales and licks. They can play all the most iconic guitar god songs perfectly, perhaps with even more precision than the original recordings.

But it’s not enough to know all the notes. You have to know why they need to be played.

That’s why the Kia Stinger still isn’t a hit record.