This full-size SUV knows its place

General Motors makes major powertrain and suspension changes to its full-size SUVs with about the same frequency as a career politician follows through on their election-year promises. It’s worth your while to pay attention to the extensive modifications GM has introduced to its lineup of big brutes; like a fulfilled promise from Ottawa or Queen’s Park, it’ll probably only happen once or twice in your lifetime.

We’ll get to the handsome new sheet metal in a moment but for now, let’s start with the oily bits. For 2021, GMC has ditched the traditional live rear axle, a bit of technology dating back to chariots at the Roman Coliseum. In its place is a more compact multilink independent rear suspension, permitting a lower load floor that opens up more interior space for both cargo and humans. Ride quality is top notch, with our region’s railway crossings and pockmarked roads failing to upset even the notoriously picky Nanny Hynes on her way to socially distant bingo.

If you hear a Yukon AT4 exhaling air, it is likely equipped with GMC’s available four-corner Air Ride Adaptive Suspension. This offers ride-height adjustments while incorporating an automatic self-levelling feature. The latter comes in handy when testing the outer limits of Yukon’s towing capacity. Drivers can raise the body up to two inches for additional ground clearance when driving off-road and, in higher speed highway driving, the system automatically lowers Yukon’s ride height about 1 inch to improve aerodynamics and fuel efficiency.

Powering this Yukon AT4 is a familiar 5.3-litre V8 engine making 355 horses and 383 lb-ft of torque. A nifty new Duramax diesel belting out nearly a hundred more torques is also available, while the 6.2-litre V8 remains standard kit on uber-luxe Denali and should really be offered as an option on the AT4. All three are paired to a sweet-shifting 10-speed automatic, allowing markedly improved seat-of-pants acceleration compared to older 5.3-litre equipped GM vehicles with fewer gears. Also, someone’s been tuning the exhaust on this V8 as it sounds far more robust on startup than your author’s 2018 Sierra pickup truck ever did. Yukon’s auto start-stop system is nearly invisible in traffic. 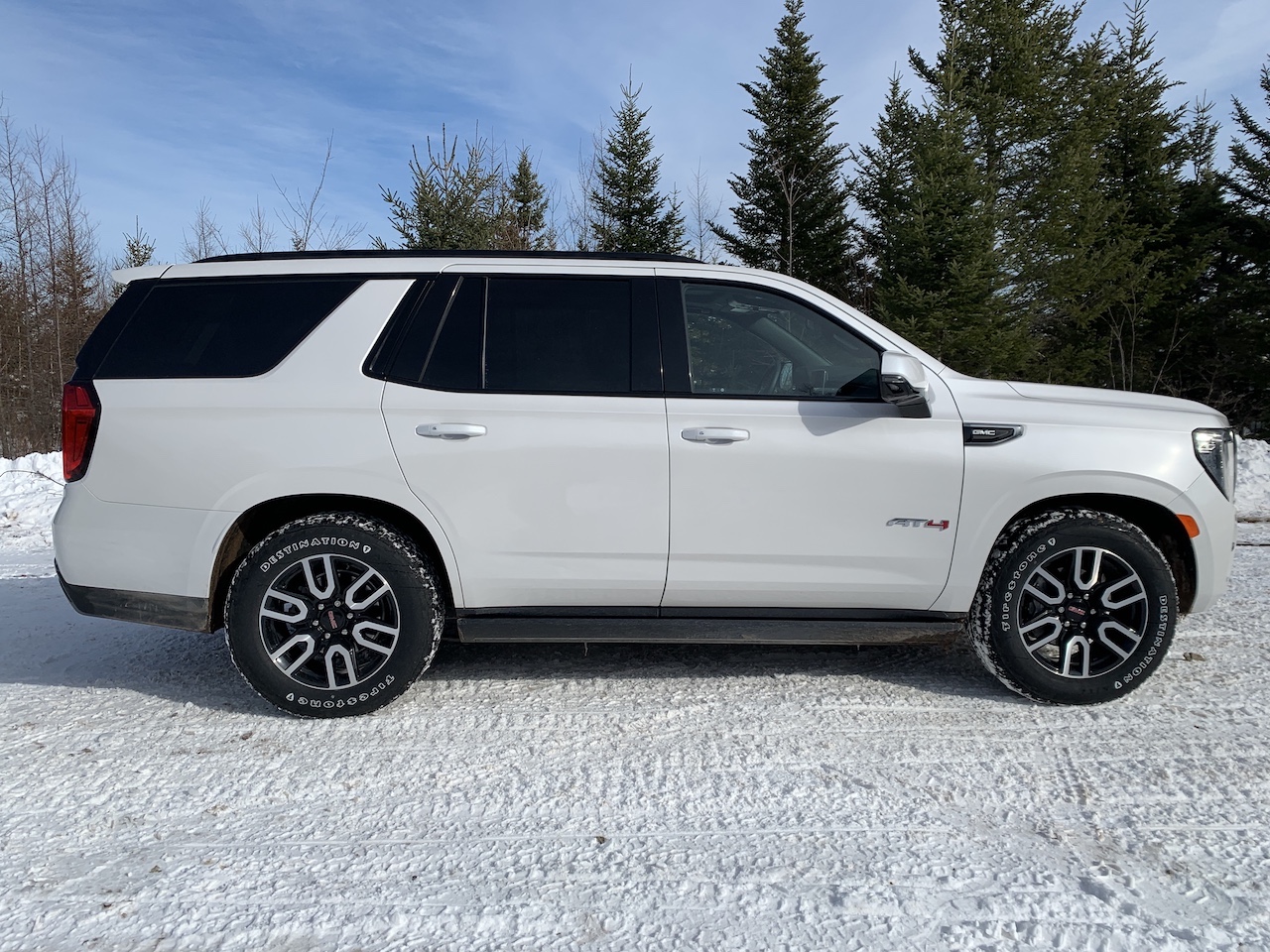 Yukon’s handsome new styling defines the meaning of road presence. This AT4 trim uses a two-bar grille with blacked-out treatment, bookended by a set of stylish stacked headlamps. Other trims will continue to prove there’s no plate like chrome. AT4 also provides a pair of red recovery hooks similar to the Sierra AT4 pickup truck. Other AT4-specific off-road goodies include underbody skid plates and an aggressive front bumper designed to provide 32 degrees of approach angle.

Stepping inside, one will find an interior cabin that is worlds away from GM’s current crop of pickup trucks – both in terms of layout and materials. Soft-touch perforated surfaces line the dashboard, and contrasting stitching looks good. Physical dials for ventilation and audio deploy a plastic-like material, causing them to fall out of step with the rest of this well-assembled interior. Gauges are dinner plates and the colour heads-up display is vast.

Visibility is clear in all directions, particularly out over the hood that is the size and shape – and in our case, the colour – of a Sealy Posturepedic mattress. Storage abounds, including a cube-shaped cubby to the right of Yukon’s infotainment screen that is covered by a sliding door as if it were concealing the Shroud of Turin. A wireless charger of improved design compared to the old truck is ready to feed electrons into your smartphone. Don’t listen to Luddites carping about the new push-button gear selector – it works just fine.

That new rear suspension has a marked impact on interior space, particularly in the third row. Your author stands 6-foot 6-inches in his size 13 stocking feet and had little trouble acclimating to sitting in the Way Back. GMC’s rejiggering of this area has resulted in a shocking 10.1-inch increase in third-row legroom; in fact, this year’s Yukon has more space for humans than last year’s plus-size Yukon XL. Thanks, new suspension (an extra six inches of length didn’t hurt, either). 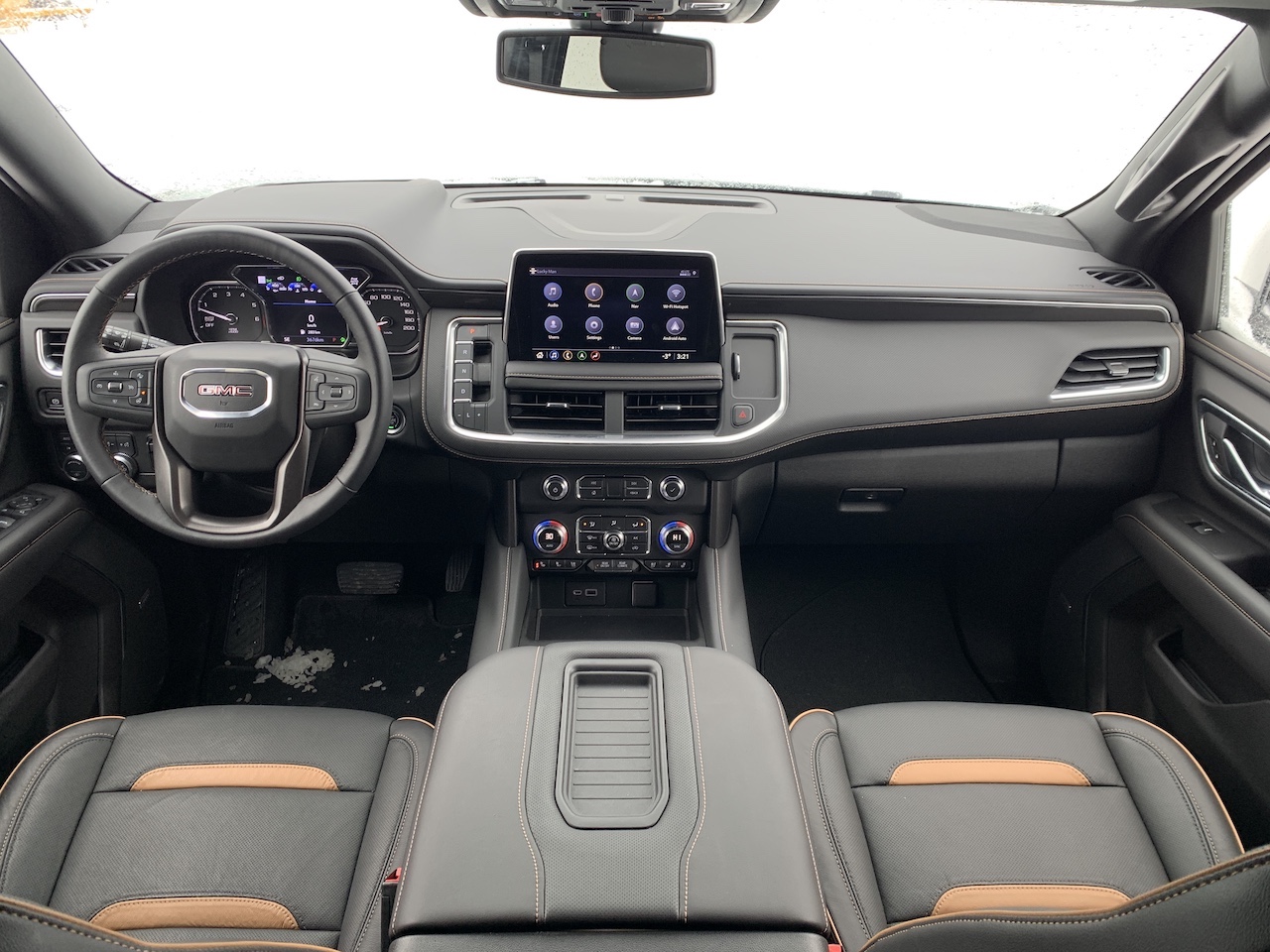 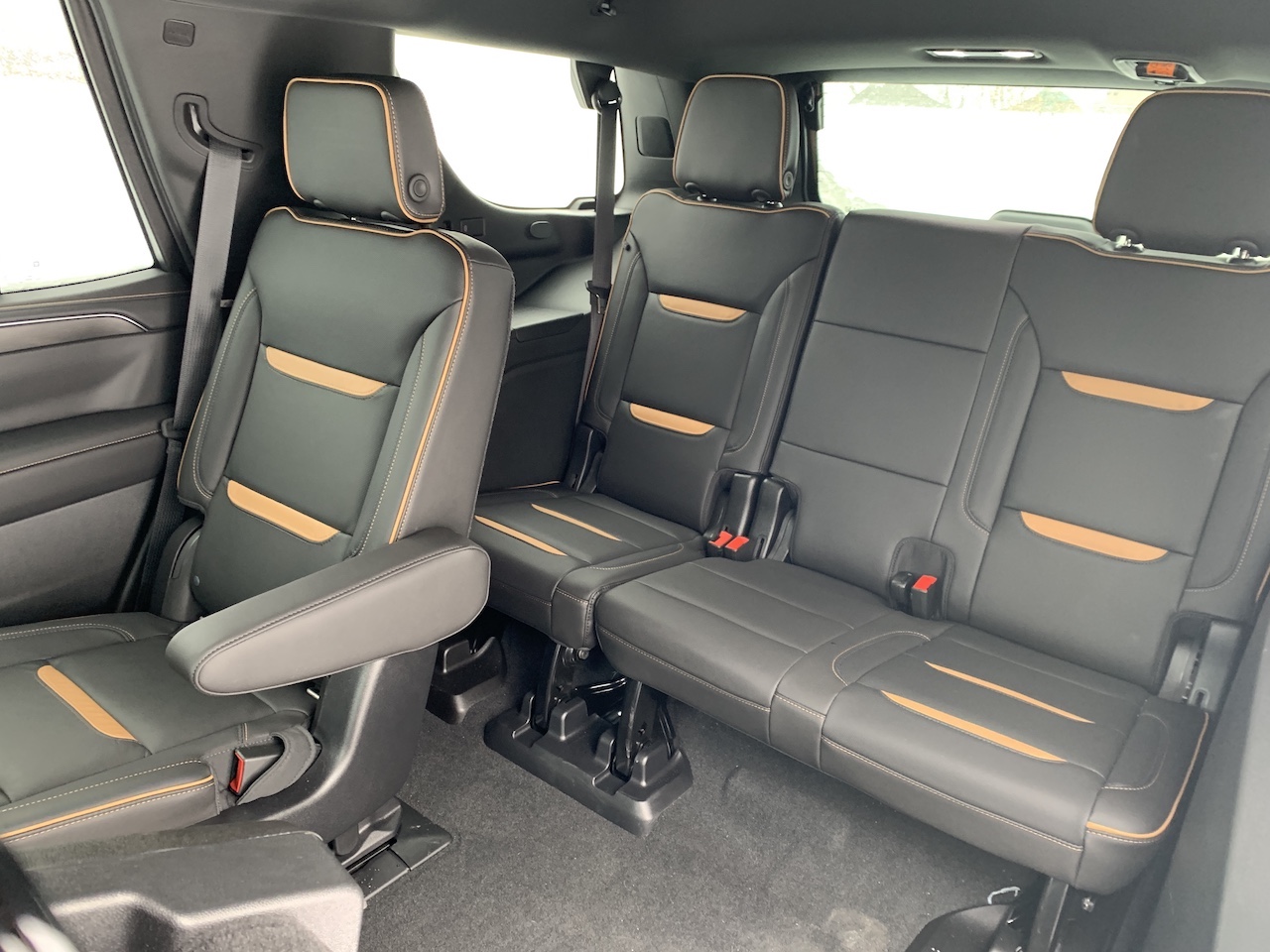 Costs that are, as you’d expect, equally vast as the Yukon’s own dimensions. Our test unit managed 14.9L/100km (15.8 mpg) during a frigid week in February, one which saw plenty of idling and remote starts. I expected David Suzuki to show up at my door and scold me with a Gemini Award. Still, these numbers are comparable to other machines in its segment and even to some a size smaller (4Runner comes to mind).

Its sticker price is similarly ambitious. Your author would forgo his tester’s Premium Plus package that sounds like a soup cracker but is actually a $9,795 option set comprised of a panoramic sunroof and other minor comforts. This would hold an AT4 closer to its $74,698 starting price. Don’t forget the entry-level (but hardly base model) Yukon has exactly the same amount of space and power as our tester but stickers at $61,298.

In an age of electrification this and sustainable that, the Yukon AT4 remains a glorious aberration – big as a Yonge Street apartment and as politically correct as a Monsanto home fracking kit. Thing is, if you need to carry six people and tow a heavy trailer, GMC Yukon remains one of the few games in town that can comfortably do both at once while cosseting its passengers and looking good in traffic.

Yukon knows its role and carries it out very well. 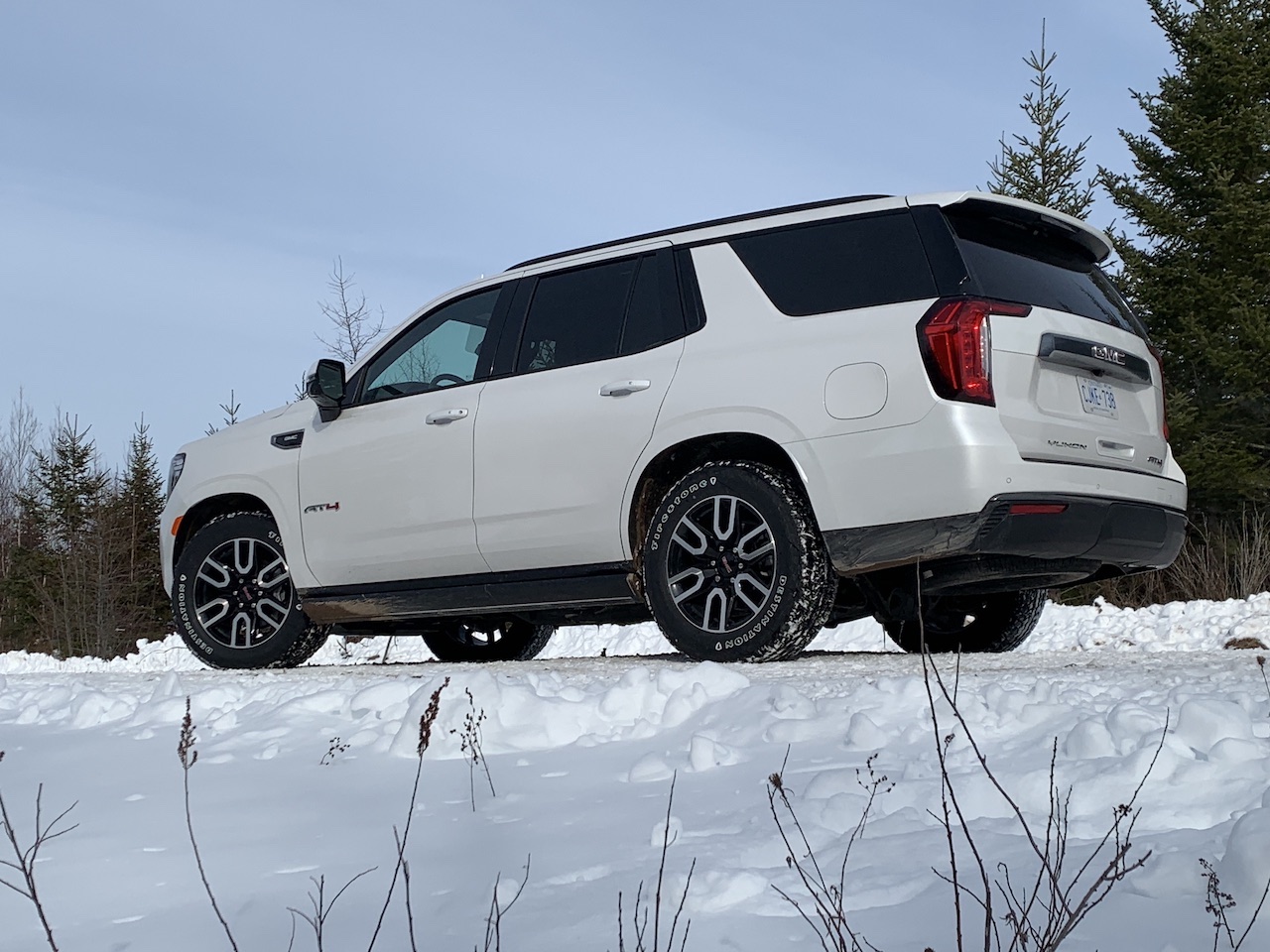