Some cars need no explanation. One look, and you know.

Even if you’re not certain, you have an idea. Almost instinctively, you get it.

The Ford Mustang is one such car. It’s so embedded in our culture, not just due to longevity, or its many lives lived in racing, as a favoured ride of Hollywood legends and, perhaps unfortunately, the unwitting star of many Cars & Coffee meets gone awry, but because we feel we know it in some way.

Honestly, for this review I could probably let my mother’s cat loose on my laptop keyboard for a few paragraphs, send that to my editor, and so long as there’s a headline, a spec box and photos, the story will still get plenty of clicks.

You can’t help but be interested, because the Mustang draws you in. You’re intrigued because you love it, but even if you don’t, it’s familiar. You know this car even if you’ve never owned one. You sat in one, you drove another, the neighbour’s kid rips around in theirs, or maybe an old sweetheart has one. The stories are legion.

After 57 years, six generations and millions sold, the Mustang is woven into our collective consciousness, arguably, like no other car. It’s both memory maker and recall machine. It rides a fine line between past and present and, unlike other cars, there’s truth in advertising. The Mustang drives like it looks. 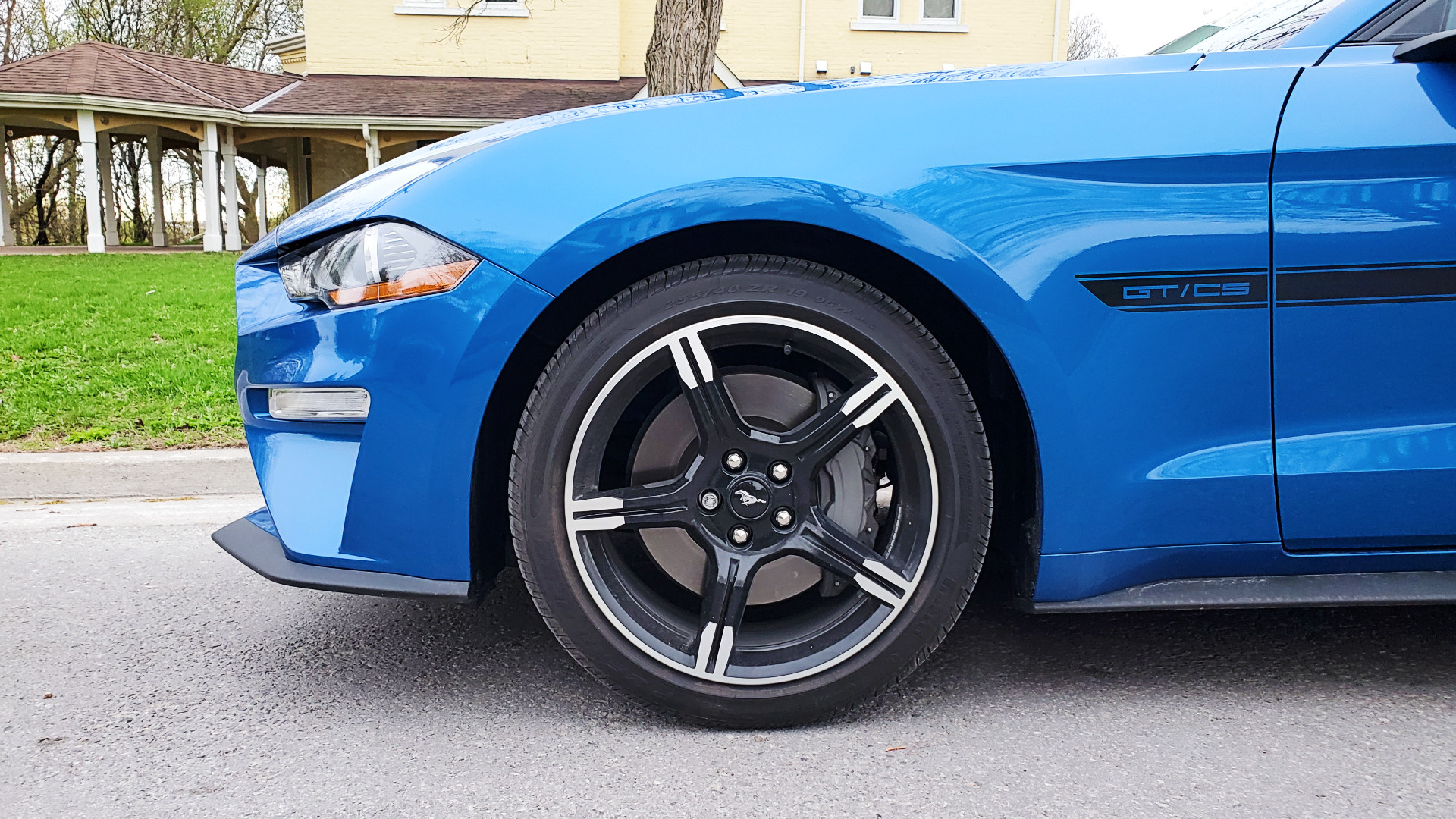 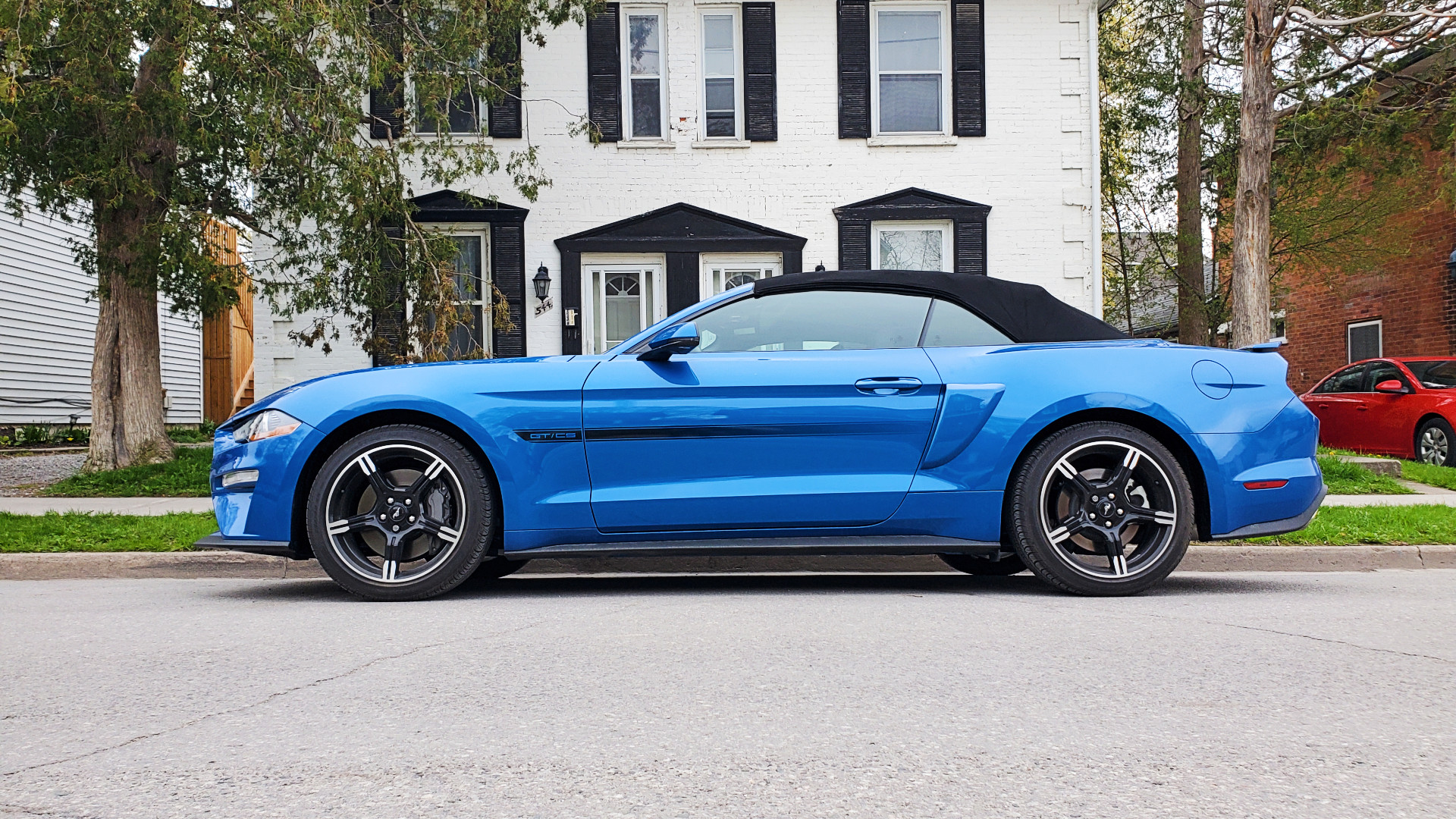 With that in mind, I recently spent a week driving a 2021 Mustang GT Premium Convertible. My test was in late April, so the cool and damp weather kept the top mostly up, but I managed to drop it a few times.

My tester is finished in Velocity Blue with an Ebony leather-trimmed interior. As with most press vehicles I drive, several option boxes have been checked. Key among these is the California Special Package ($2,500) which adds 19-inch machine-faced aluminum wheels, along with a host of cosmetic items including California Special interior and exterior badging, Carbon Hex aluminum instrument panel, Miko Suede door and seat inserts with red contrast stitching, front and rear spoiler, side scoops, side stripe and a unique front grille offset Tri-Bar Pony logo.

Because it’s a Mustang GT, the first place to start is under the hood. Crammed into the engine bay is a Windsor, Ontario-built 5.0-litre V8 engine that produces 460 horsepower and 420 lb-ft of torque, which is unchanged for 2021.

Peak torque is socked away relatively high in the power band (4,500 rpm), but do you really need an excuse to go find it? I think not. Same goes for those 460 ponies, which don’t arrive until 7,500 rpm, which, incidentally, is also engine redline. But finding reasons to make the V8 scream isn’t hard when it’s wrapped in Mustang packaging. But by the time you get to within shouting distance of those numbers, you’ll be rocketing well past posted speed limits and won’t care much if peak output has been reached or not. The blurring scenery is proof enough. 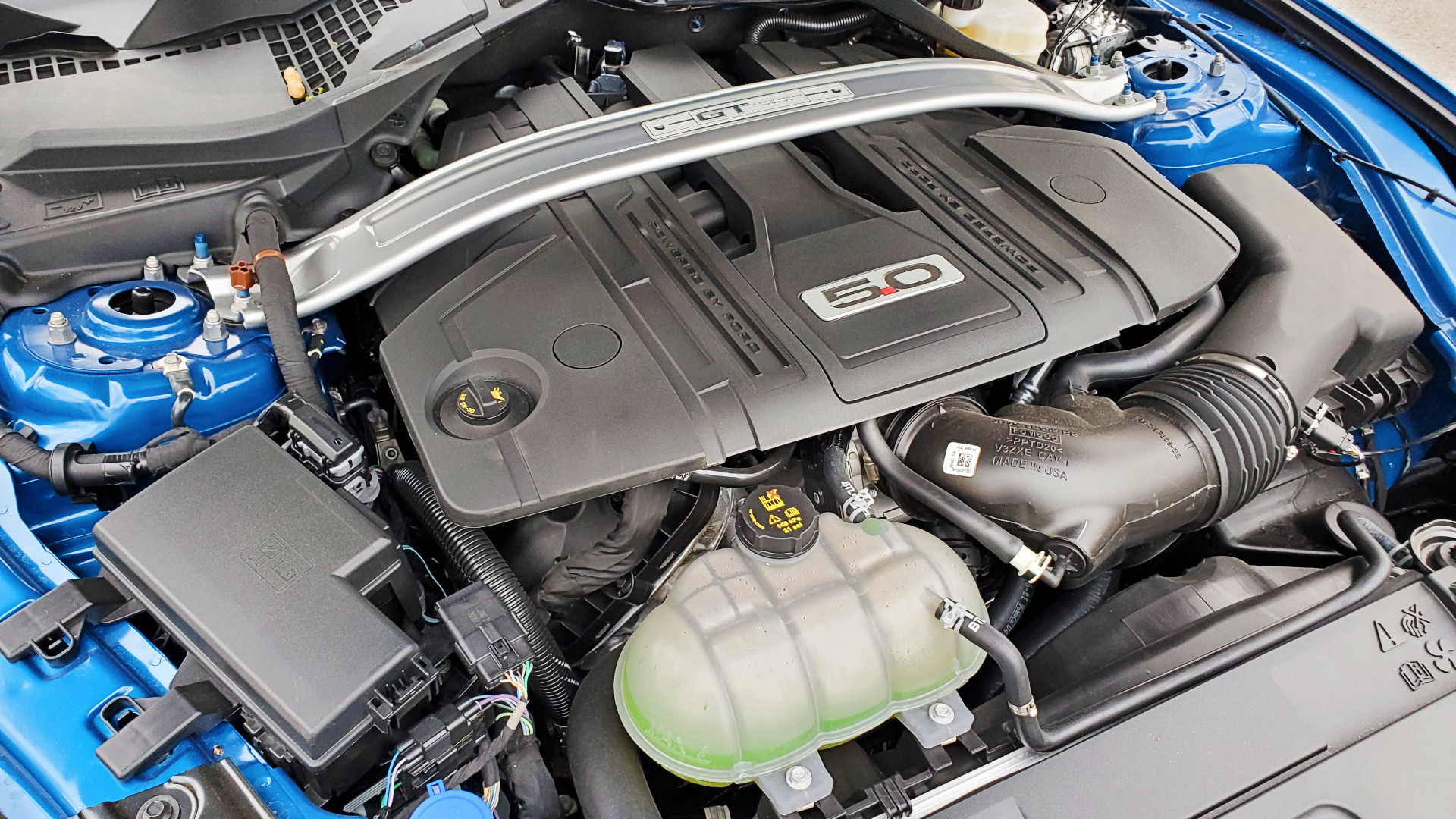 Bolted to the V8 is a six-speed manual transmission, with a relatively light clutch that makes banging through the gears a breeze. It’s been said that going from second to third gear requires greater effort, and I suppose that’s true given their relationship to one another, but only by degree – you’ll need a full hand on the shifter as opposed to a finger or two. It’s not 1969, anymore. You needn’t be a hotshot in order to get the power down reliably in this car without the rear end coming around.

As for the Mustang aesthetic in 2021, I’d say it’s as sexy as ever, at least on the outside. The current S550 gen has been around since 2015 but has aged well. Ford designers elected to make it look a touch angrier when they added more creases and sharp edges for the 2018 facelift, but I think it works. The balance between beauty and aggression appears well struck to these eyes.

It’s more of a mixed bag on the inside, however. For a $61,000 car, there is a surprisingly high degree of cheap plastic. I acknowledge the California Special package does a decent job of covering some of the harder stuff with padded trim that has tasteful red stitching accents, but some low-rent plastic remains visible on the centre console, dashboard and door panels.

Is it unforgivable? No, but it’s more present than it should be. On the plus side, the 12-inch digital instrument cluster is gorgeous, and offers a vast array of customization and colours, along with Track Apps, for displaying performance data during track days. It’s well worth the extra cost, in my view.

Other interior bright spots include the leather / suede seating, toggle switches in the centre stack and details such as the California Special plate above the glove box, GT / CS embossing on the front seats and the leather and metallic ball-shaped shifter.

I’ve said before that details really matter in cars of this type, and these touches are well-designed and executed. Now if Ford could just ditch some of the cheap plastic and replace the Sync infotainment system with a unit that offers better graphics, response time and user interface, they’d really be on to something. 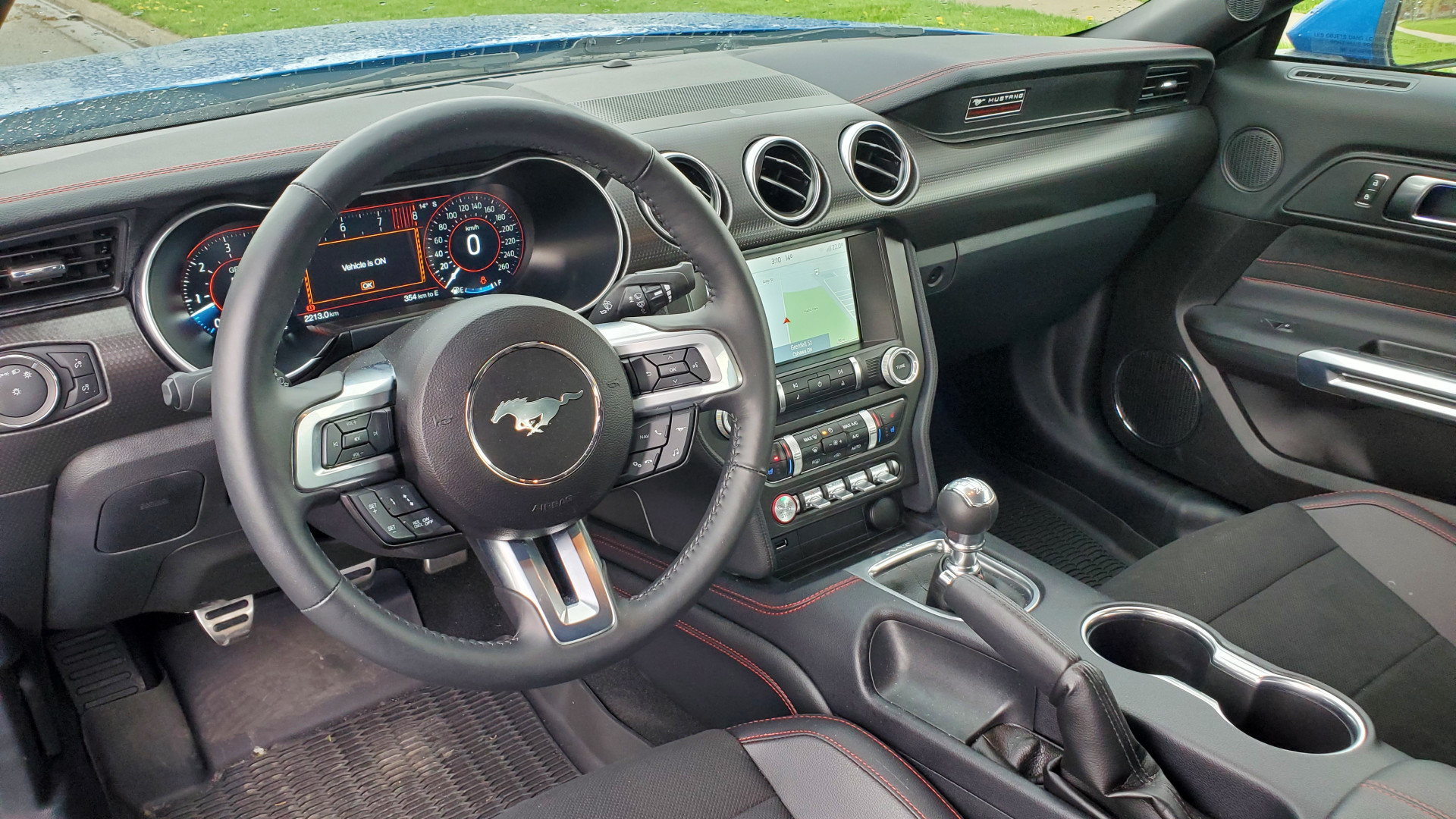 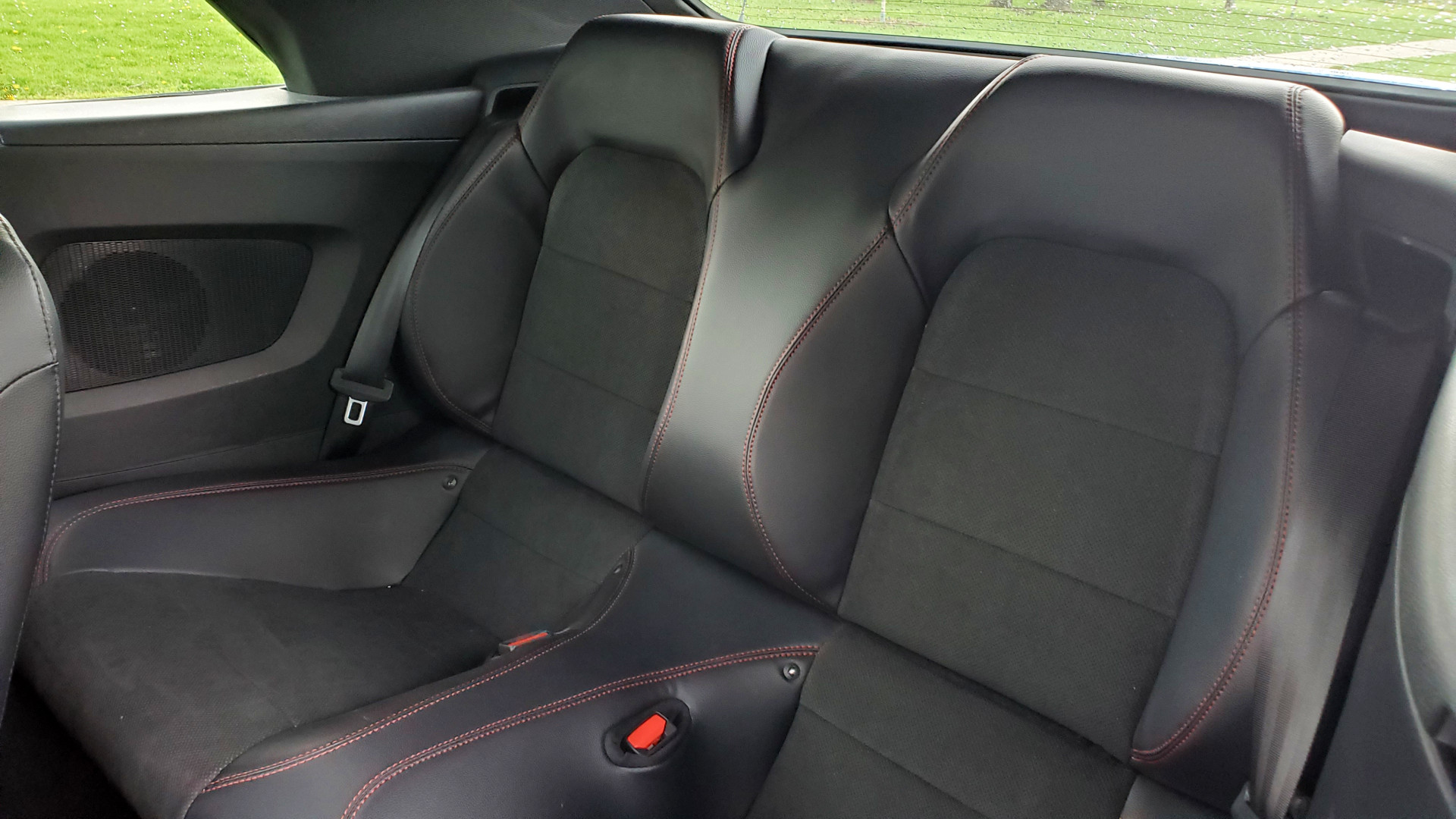 But I acknowledge cabin refinement likely isn’t a big purchase consideration for most Mustang buyers. I get it. Most don’t care and many even like its rec room / video game console aesthetic because, hey, it’s designed for fun, dude.

I know. And it is fun. Lots of fun. Just listening to the V8 bark to life at start up is fun. Mashing the throttle with every upshift and hearing the engine bark approvingly in response is fun, putting the surprisingly easy to stow roof down is fun – even in 10C weather.

The sharp handling and steering are fun, and even the hint of snap oversteer is fun, so long as you don’t pancake a wall or mow down unwitting pedestrians. And listening to that 5.0L V8 turn over at 2,000 rpm during a midday (or midnight) cruise with the roof down is fun. In fact, it’s sublime.

It’s why we love the Mustang and why it has such a hold on our imaginations, and our passions.

And deep down, it’s why we’re fine if it never changes. Warts and all.