When I started to drive (way back when), I was crazy about cars. Not particularly out-of-the-showroom cars but cars that you could buy used for not much money and fix them up. And then soup them up.

A mark of teenage success in the town where I lived was a 1954-to-’56 Ford or Mercury with the rear end lowered, bubble skirts covering the rear wheel wells, spinner caps on the front wheels, dual exhausts and a Hollywood muffler that emanated a deep, throaty rumble that stirred the depths of your very soul. No bucket seats in those days; the front seat was a bench and your girlfriend would sit over in the middle, snuggled right up against you.

I drove cars throughout much of my working career, mostly of the showroom variety. You reach a point in your life and career where spinner caps and Hollywood mufflers don’t fit your upwardly mobile, managerial image.

At some point, children arrived. At about the same time, I outgrew after-midnight rural drag races and moved onto the speedway and went from cars to vans. Not minivans. I’m talking about the full-size ones that had seatbelts for eleven plus room for a spare 467 c.i. big-block Chevy engine in the back.

The kids had plenty of room – when the van wasn’t moving, of course – but if we went to the grocery store and then had to make a stop at Sears or the Bay on the way home, there was never a concern about having enough room.

My all-time favourite was a 1982 Chevrolet Beauville van. I swore it was the greatest vehicle I ever owned.

But then came 2015 and the Ford Motor Co. took one of the great chances in automotive history by being the first major manufacturer to use gobs of aluminum in its F-150. I borrowed one for a road test and my beloved Chevy Beauville went from No. 1 to No. 2. on my list of favourites, just liked that.

And Ford has continued to lead the pickup pack. It’s got a hybrid on the market now and early next year it will have the first all-electric pickup truck for sale. That doesn’t mean other manufacturers aren’t going down the same road but the difference is that Ford sets a date and then sticks to it.

And I have to say it and say it loud: once you buy your first pickup, you will never go back to a car. Get the big one – the King’s Ranch, for instance – and it gives you all the room in the world in the back seats (they fold up) and if you have to move one of your kids into a university residence, you can pile furniture and even a fridge into the rear.

I will tell you about the hybrid in a moment. Last week, I saw a prototype of the 2022 Ford F-150 lightning all-electric pickup truck. I’ll tell you all about it, too, even though I haven’t driven it, which is something I hope happens sometime this fall. But let’s concentrate in the beginning on the hybrid.

Ford has made some changes to the exterior of their best-selling North American vehicle and even more to the interior. But the reason I’m interested in the hybrid is that it’s a bit of a waystation between internal combustion and pure electric. The automaker is spending $22 billion (that’s billion with a “b”) in electrification through 2025 on the iconic Mustang, F-150 and others in an attempt to corner the market even more than it already has.

Now, a lot of everything, inside and out, on this hybrid model is optional, or “available,” as the companies like to put it. For instance, the F-150’s new Tailgate Work Surface is “available,” as is the Interior Work Surface (that’s when the gear lever folds down and, once hidden, gives you room to spread out your lunch or, if you’re on the job, use your laptop). The Max Recline Seats (nearly 180 degrees of decline) are also optional. That’s when you’re so pooped that you need to take a nap between jobs.

But, again, the point of this truck is the fuel mileage. The 3.5-litre PowerBoost hybrid (not a plug-in, this time) takes Ford’s twin-turbocharged 3.5-litre V6 and pairs it with a 47-hp electric motor mated with a ten-speed transmission that’s estimated to go approximately 1,100 kilometres between fill-ups, an increase of nearly 25 per cent over previous models. Besides the additional distance, the F-150 is supposed to have the most torque (570 lb-ft) and horsepower (430) of any light-duty, full-size pickup out there.

Exportable power, brought to you by Pro Power Onboard, which is standard on all models, ranges from 2.4 kilowatts to 7.2 kilowatts – enough to power 25 refrigerators. Or a bunch of power saws, take your pick.

According to a Ford release: “The electric motor applies captured regenerative braking energy to help recharge the 1.5-kilowatt-hour lithium-ion battery.” So there you go, in case you were wondering.

Inside, a new, 12-inch centre screen, which is standard on more expensive motors, allows drivers to split the screen and control multiple functions, like music and navigation. The 8-inch is standard on lower-priced models. Whichever, if something pops up that you can’t figure out, your screen connects you to the owner’s manual and you can go looking for the answer there (let’s hope you’re at a rest stop before you go scrolling through that). 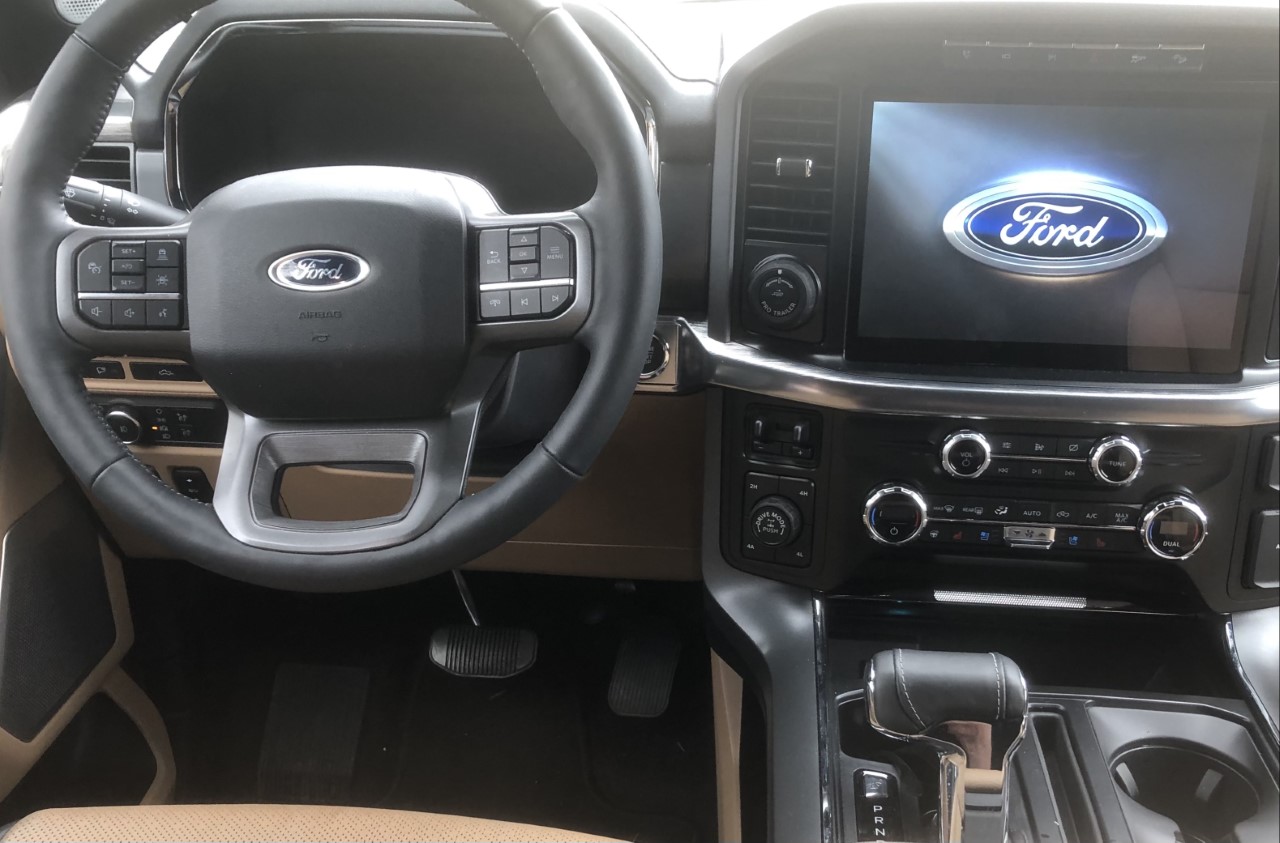 I had a hybrid for a week and thoroughly enjoyed every moment. Like the F-150s I’ve owned, the ride is smooth, steering precise and braking system robust. The big side mirrors, combined with the standard rear-view, gives you almost a 360-degree view of the world around you. One thing’s for sure: even though the now-standard driver aids are evident, there’s almost no excuse for having a crash with all that mirror vision.

Want one? Your basic starter will cost you $33,429 (plus the usual) while the super-duper, everything-you-ever-wanted in a truck will run you $89,752-plus.

I’m an enthusiastic guy. I like people who are likewise. Joseph Comacchio, Ford’s trucks vehicle line manager, is one of us. He was in Toronto recently with one of two (I understand) all-electric Ford F-150 Lightning prototypes that will go on sale early in 2022. (The truck will go on sale, not the prototype.)

Now, that doesn’t seem particularly ebullient, does it? But when you figure Joe took the first group through starting at 8:30 in the morning and he was still going strong at 3:00 in the afternoon when I showed up – and there were others still waiting – you know he had the passion. 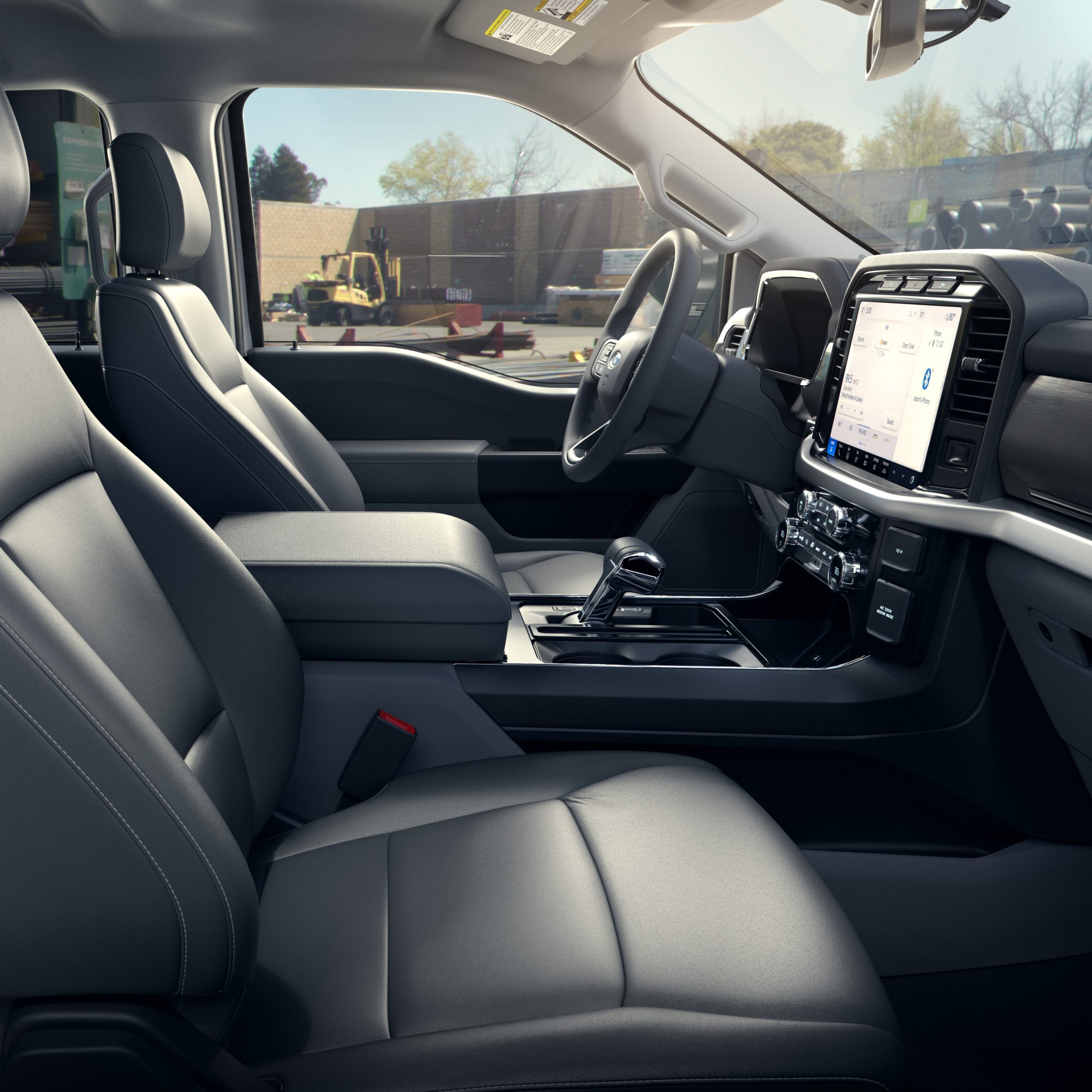 Comacchio said it once to us – and probably several dozen times when you add up the number of other tours he conducted that day – that the Lightning is not an EV but a truck with all the power, bells and whistles that previously non-electric versions boasted.

He emphasized that we were looking at a prototype and there were some things not yet set in stone. Two battery sizes will be offered, for starters. But I’ll just stick with the larger size for this quick look.

He told us that the specs show twin electric motors will produce 775 lb-ft of torque and a top range of 483 kilometres. A Level 3 fast charger can put 86 km in the battery in 10 minutes, which is terrific if you’re just running around town but not so good if you’re driving to Montreal.

Now, are you ready for this? A fully charged Lighting will be able to provide electricity to your house in case of a power breakdown for as long as three days. More realistically, however, it can power a travel trailer when you’re camped overnight while on a motoring trip.

Without an engine under the hood, Ford has (dare I say this) borrowed an expression from Jaguar Range Rover to describe the 400-litre space and so they call it the “frunk.” It can hold a couple of sets of golf clubs and has a drain plug that can drain out water from ice cubes used for a tailgate party.

There was one question Comacchio couldn’t answer initially – the length of the cord for the plug-in – but it turns out to be ten feet. I would suggest twice that length unless Ford has an EV plug-in extension cord up its sleeve.

Ford, meantime, sent out a list of talking points for journalists attending Comacchio’s sessions. Here are a couple:

Know before you haul/tow – Hauling gear/toys for your summer vacation. Not a problem. Available Digital onboard scales on the truck estimates your payload to determine the weight before you head out so you have complete peace of mind on the road. F-150 Lightning debuts available Pro Trailer Hitch Assist, which automatically controls steering, throttle and brake inputs to make hitching trailers even easier

More outlets than your garage – There are up to 11 electrical outlets inside the truck to charge your phones, tablets, tools…as many as you want! (plus 8 USB-A and USB-C plugs)

Bid adieu to gas stations – With the Intelligent Range and FordPass Power My Trip app, you can keep your F-150 Lightning charged without ever having to stop at a gas station or having to use your wallet to pay for energy. Dual onboard charging system ensures even faster home charging so you wake up always to a fully charged truck

Hands free, worry free – Most high-tech Ford F-Series ever with available BlueCruise enabling hands-free driving on the highway and Ford Power-Up software updates facilitating most updates in less than two minutes from the comfort of your own home

There is so much more but, again, we were looking at a prototype. I think it’s better to wait for the test drive, when everything is nailed down and out there for all to see and appreciate.