For years, Toyota’s Prius has been synonymous with fuel economy. Since it arrived in Canada 20 years ago, the car has been the choice for anyone looking to turn their commute from grey to green. Now, suddenly, the market has gotten a lot more complicated for this hybrid, thanks to competition from other automakers, newer technologies, and even from threats inside the same showroom. How has Toyota fought back? All-wheel drive and a new infotainment screen. Is that enough?

Even inside Toyota, the Prius nameplate that looked like it would expand to include other models like a crossover has retreated. Instead, Toyota has simply added a hybrid badge to its normal cars. There’s a Highlander Hybrid, a RAV4 Hybrid, Camry Hybrid, Avalon Hybrid (we don’t get that one, but it exists), and now even a Corolla Hybrid. And with the RAV4 and Corolla choices, fuel economy is near enough as makes no difference to the bigger compromise that is the Prius hatchback. To give the Prius a bit of its e-groove back, Toyota added all-wheel drive last year.

It’s a neat trick, one that it debuted with the Highlander. Forget the effort of putting a transfer case under the hood and a driveshaft to the rear. Instead, just put a second electric propulsion motor out back. Use the same battery that drives the front to send electrons to the rear. It’s all-wheel drive the easy way. Time to go grab a coffee and then head out for some electric donuts on a winter day, right? 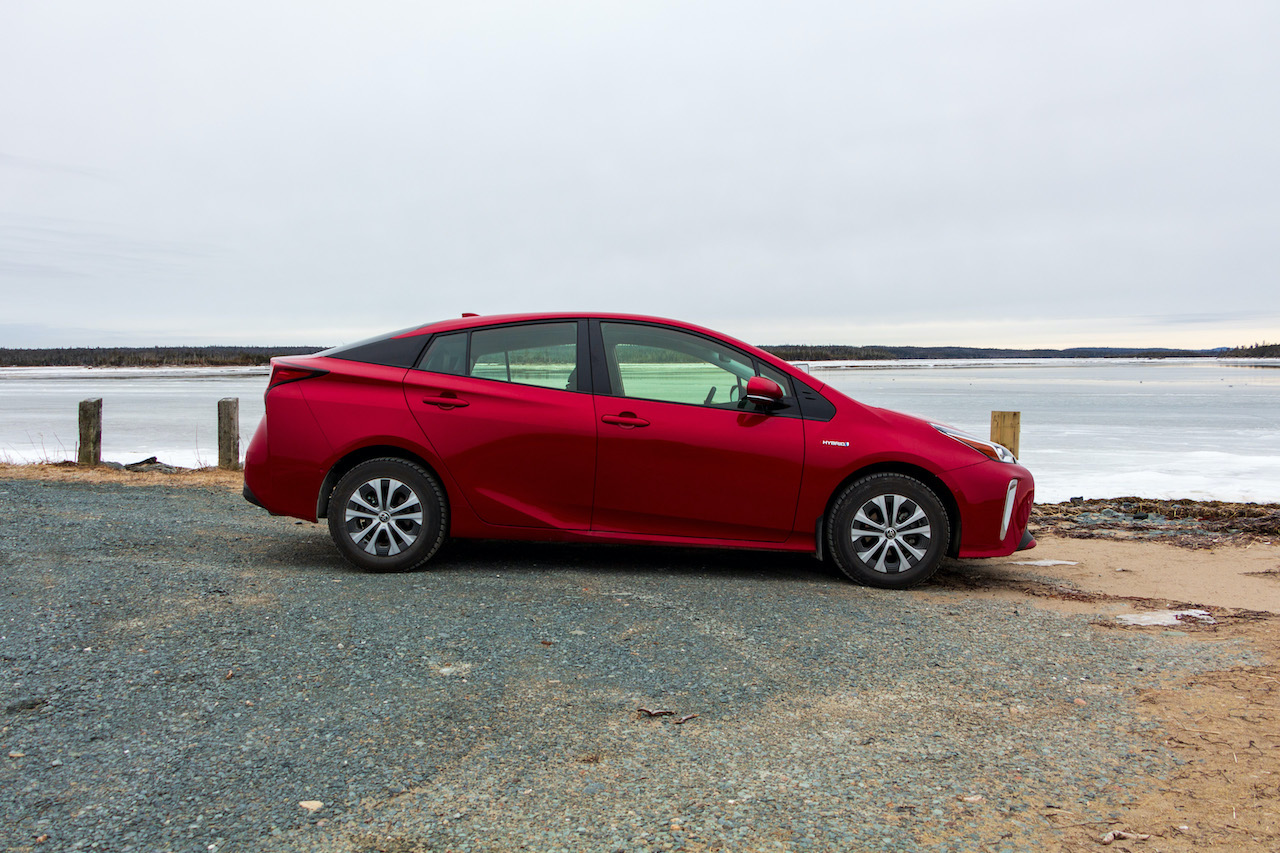 Because while Toyota gives the Prius a 71 hp motor up front, there didn’t seem to be room for that much in the rear. You won’t even find the 54 hp motor from the back of the RAV4. What’s the figure? A whopping seven horses and 40 lb-ft of torque. This is still a Prius, after all.

Turn off Toyota’s traction control system (and ignore the constant warning telling you you’ve dared ask such a question from the car), crank the wheel and mash the accelerator, and instead of snowy spins you’ll get… Acceleration. That’s all. The car will go forward almost as quickly as if you weren’t in a snow-covered parking lot.

Add some hill, like a steep and snowy driveway, and it’s more of the same. The Prius never goes quickly, the extra weight of the AWD kit and the heavier old-style battery actually makes it a touch slower than the FWD model, but it goes. 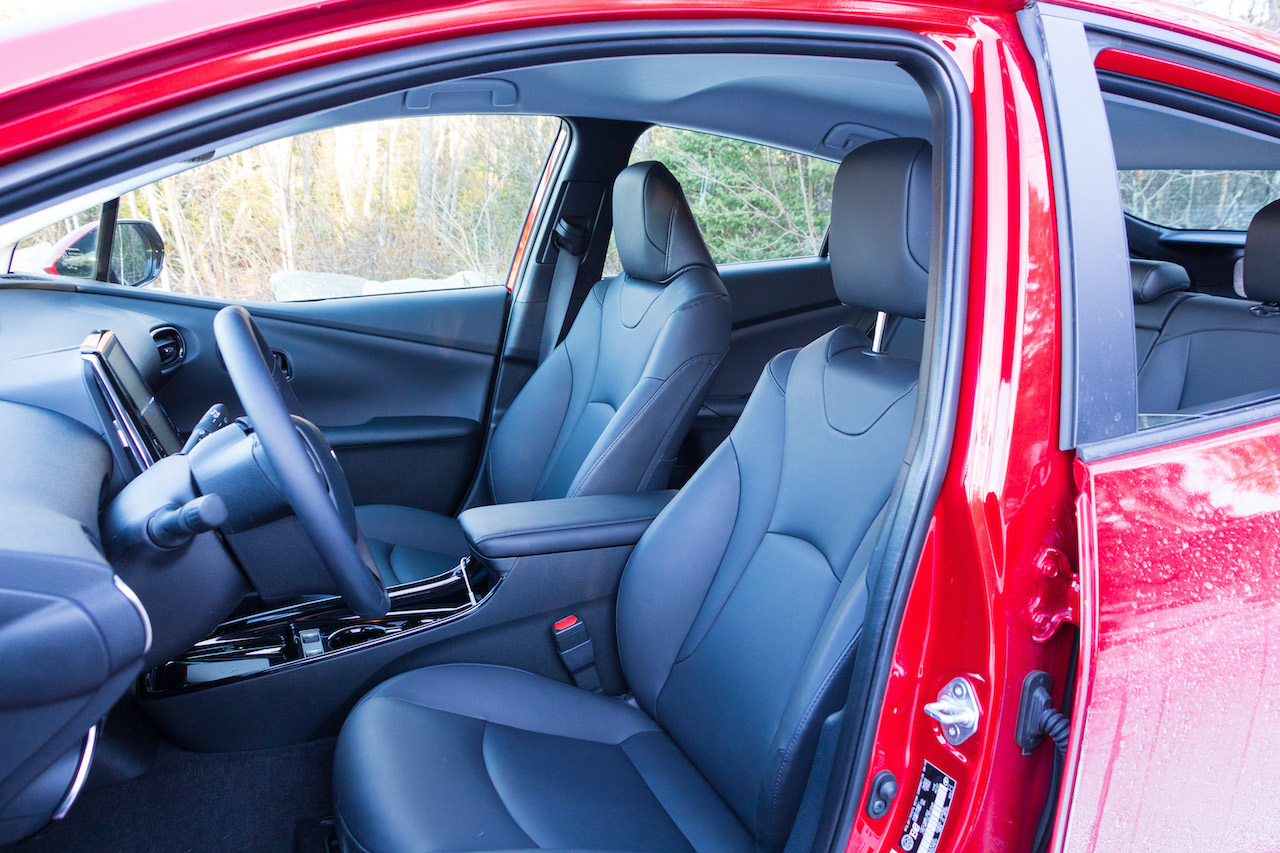 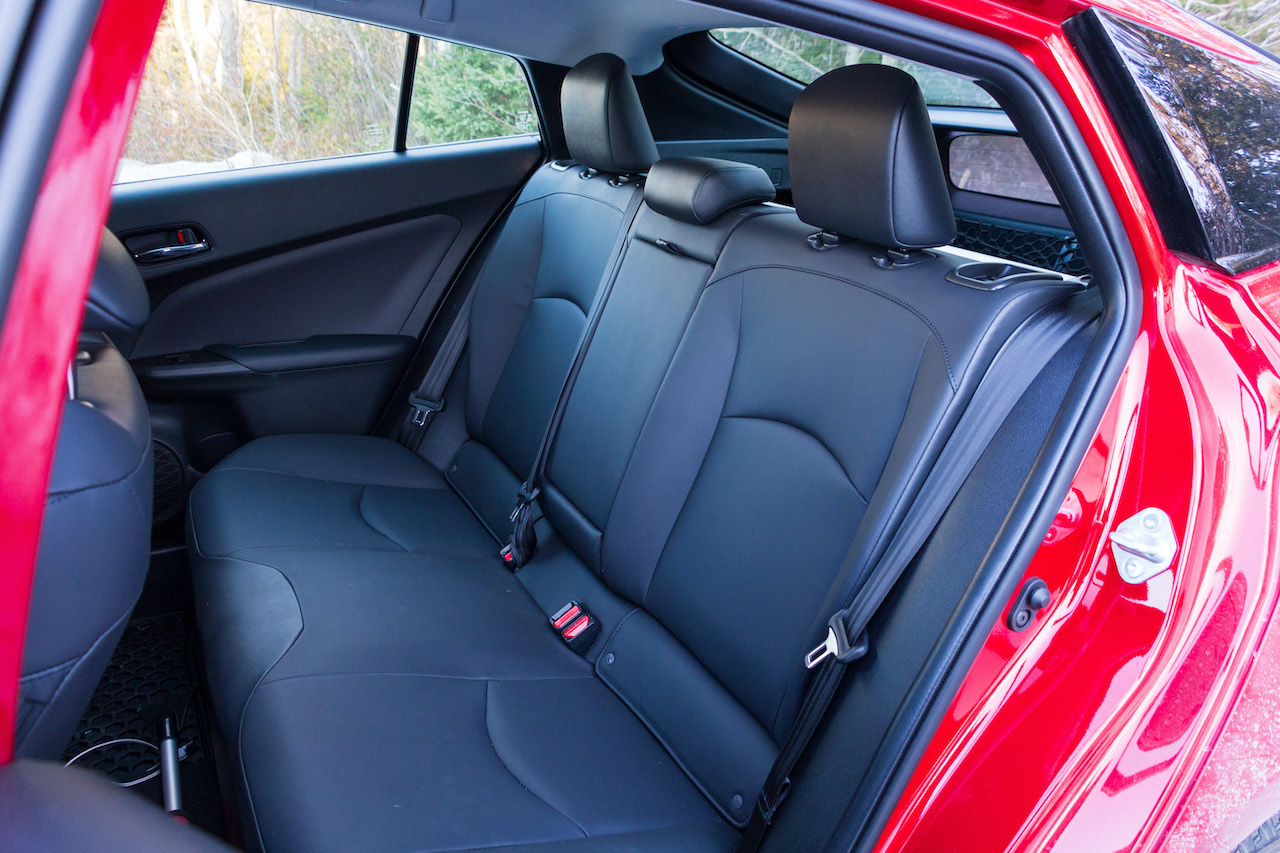 Seven hp from the rear motor might not sound like much, but think about the last time you needed a push from a misjudged snowbank. All it takes is one frozen person in sneakers to get the car moving, and a person is exerting a whole lot less shove than that motor. Especially in those sneakers instead of the Bridgestone Blizzaks on my tester.

Maybe there’s a safety lesson here. If 7 hp and two extra tires aren’t enough extra tractive force, or if you need AWD at more than 70 km/h, you should either stay home or slow down. And hey, this AWD-e system is cheap, just $500 on this trim, so it should leave enough in the budget for both it and a set of good winter tires. Because yes, no matter the drive system, you still need winter rubber.

The AWD Prius uses a larger battery than the standard car, and it’s also NiMH instead of the newer LiOn chemistry. Toyota says that’s because it works better in the cold, which is when you’ll need AWD most. While it was below freezing here in Halifax, it’s never cold enough to challenge even a 12V car battery, so we’ll take Toyota’s word for it.

On the road, unless you’re constantly eyeballing the AWD power gauge you’ll likely never notice the difference in traction. It’s seamless in operation, and there’s not enough power at the back to make the Prius more fun to drive. Understeer rules the day here, but that’s probably what Prius buyers want. If you want an electric drift machine, put your Model 3 into driver-aid-removing dyno mode and then get ready to call your insurance adjuster. 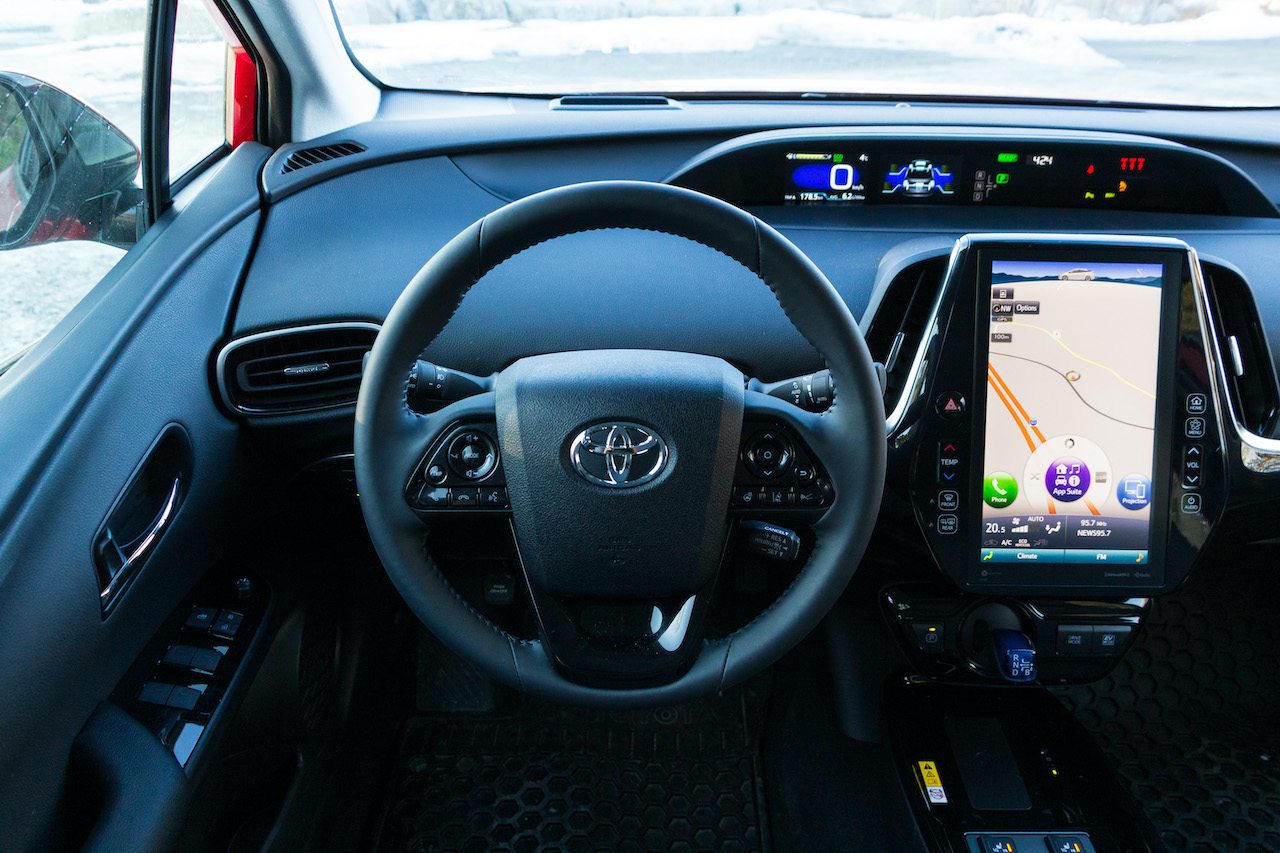 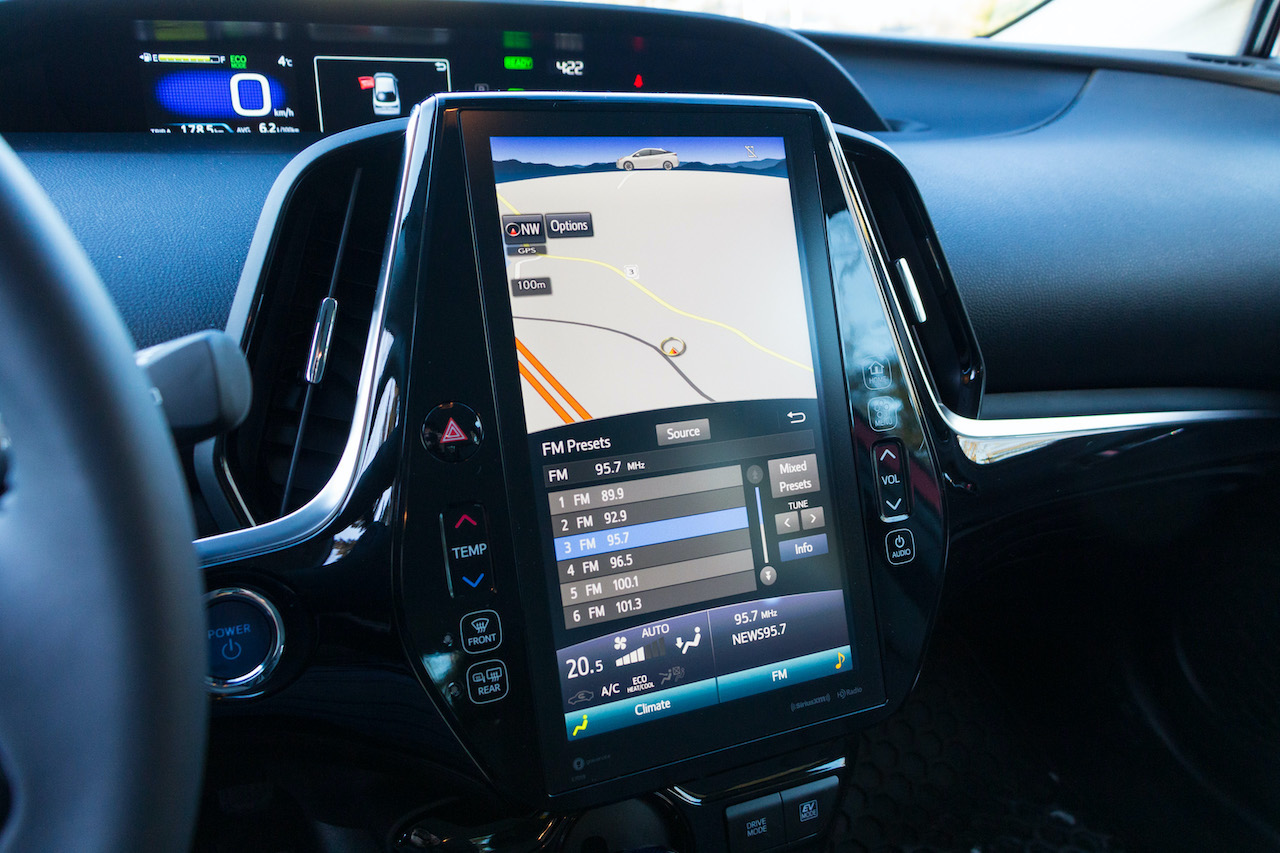 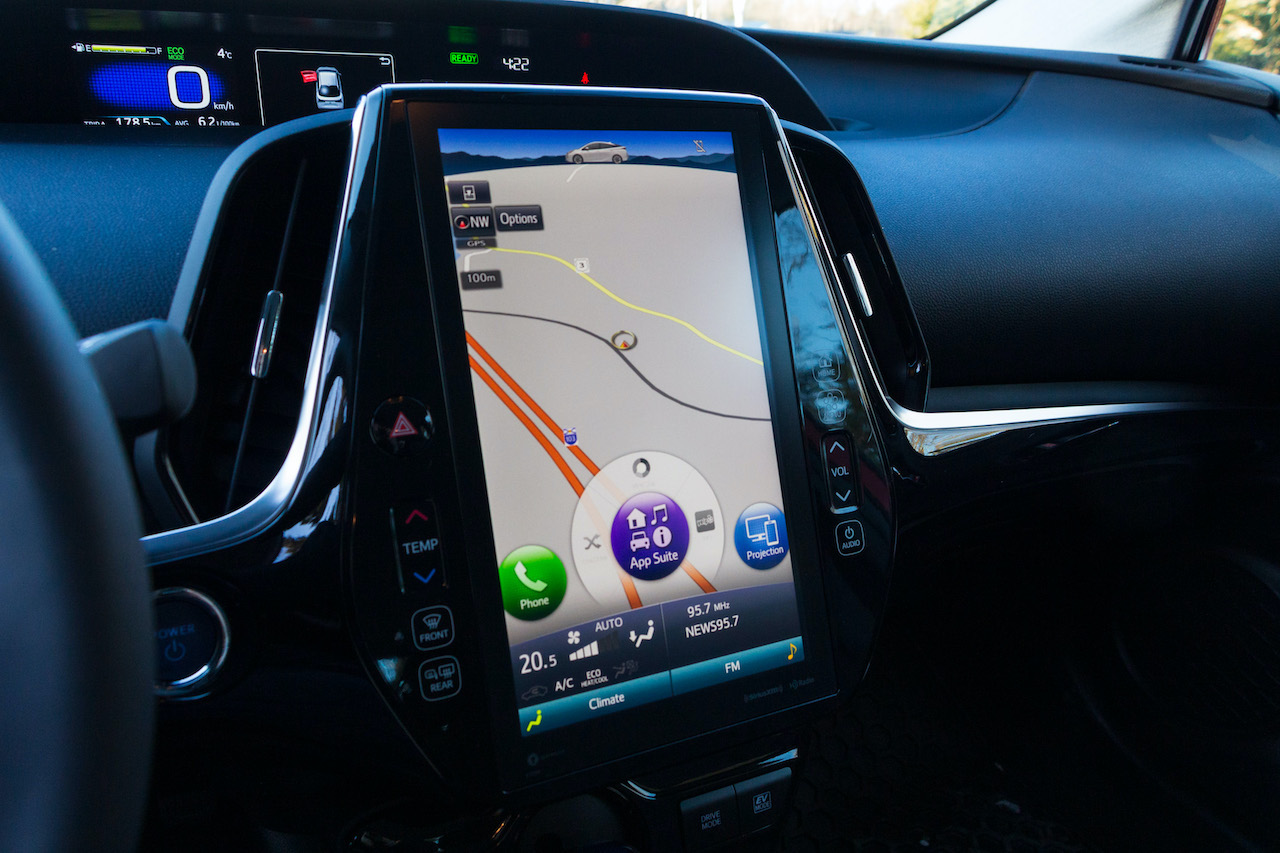 The Prius doesn’t have particularly quick turn-in, but it’s predictable and linear. It also has a pretty great ride for a car this size, thanks to the 15-inch wheels that offer plenty of impact-absorbing sidewall to soak up everything winter has to offer. There’s some road noise, but it’s definitely not out of place for this size class of vehicle. Though the Prius is still small, it’s gotten pricey, and that could make the noise more of an issue for buyers.

Inside, the thin seats are comfortable, and Toyota’s Softex seat covering is, well, soft. But the seats that are designed to save weight also lack lumbar support, and that’s coming from someone who reaches to deflate the lumbar adjustment before getting into any vehicle. There’s plenty of room up front thanks to the bulging roofline, but it tapers sharply toward the rear, meaning that passengers in the back seat will find the headliner a tight fit in the name of improved aerodynamics.

Toyota’s use of a centre-mount instrument cluster in the Prius is easy enough to get accustomed to, especially in this car quipped with a head-up display speedometer so you don’t really need the dash. But it leaves a massive expanse of black plastic in front of the driver that makes the Prius feel cheap. But this isn’t a cheap vehicle. Another interior miss is the foot-operated parking brake. Despite all the electronic goodies on this car, the parking brake is in the footwell, and the hard metal arm wants to live in the same real estate as my shin. Contact between the two was frequent and painful.

With the Technology Package, the AWD-e Prius swaps out the 7.0-inch infotainment screen from every other trim for an 11.6-inch version that absolutely dominates the centre stack of the car. It takes over most of the climate control functions, nearly all of the audio functions, and adds built-in navigation. It has Apple CarPlay, but anyone with an Android device will still be controlling their phone-sourced tunes directly from their phone. With my Android test phones, it didn’t even display the track information. After spending a few hours trying to get the hang of it, this is a touch interface to master. 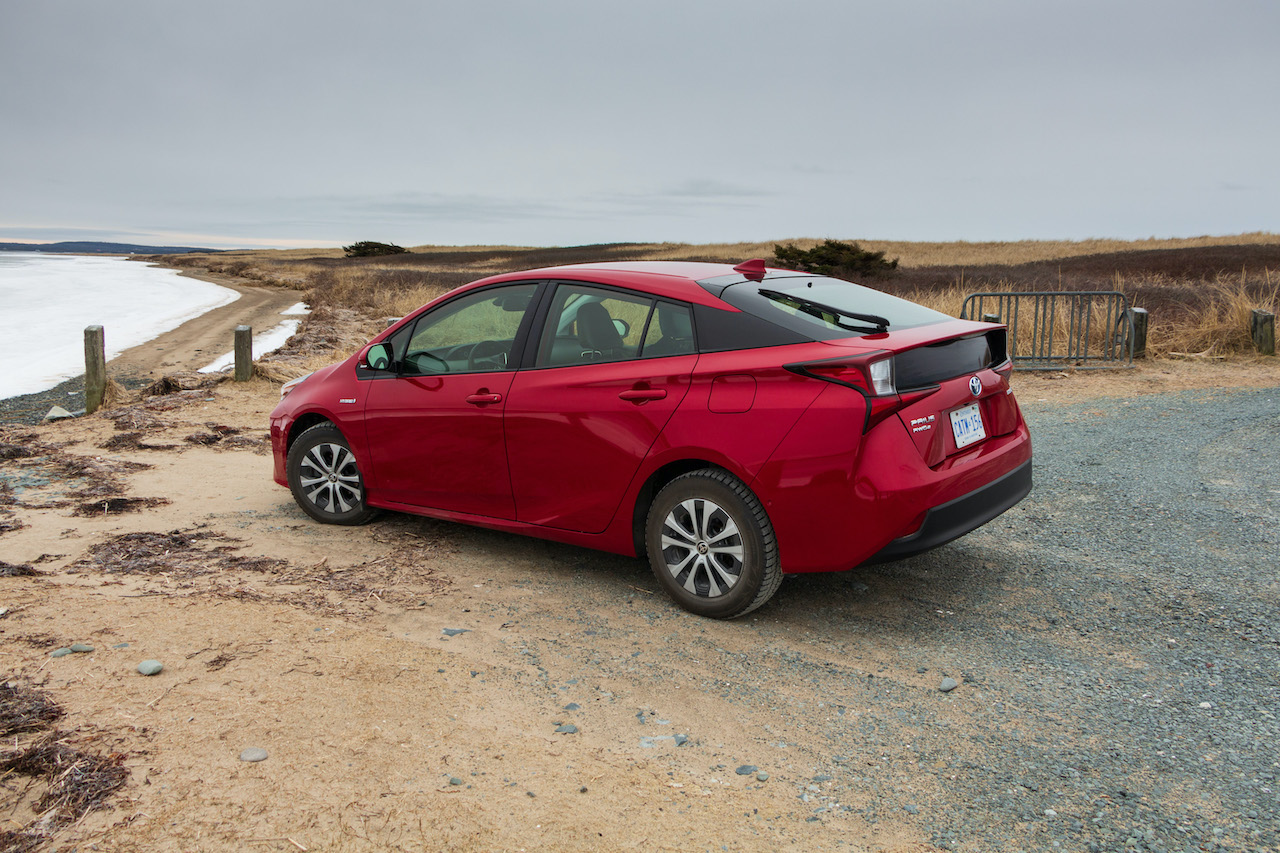 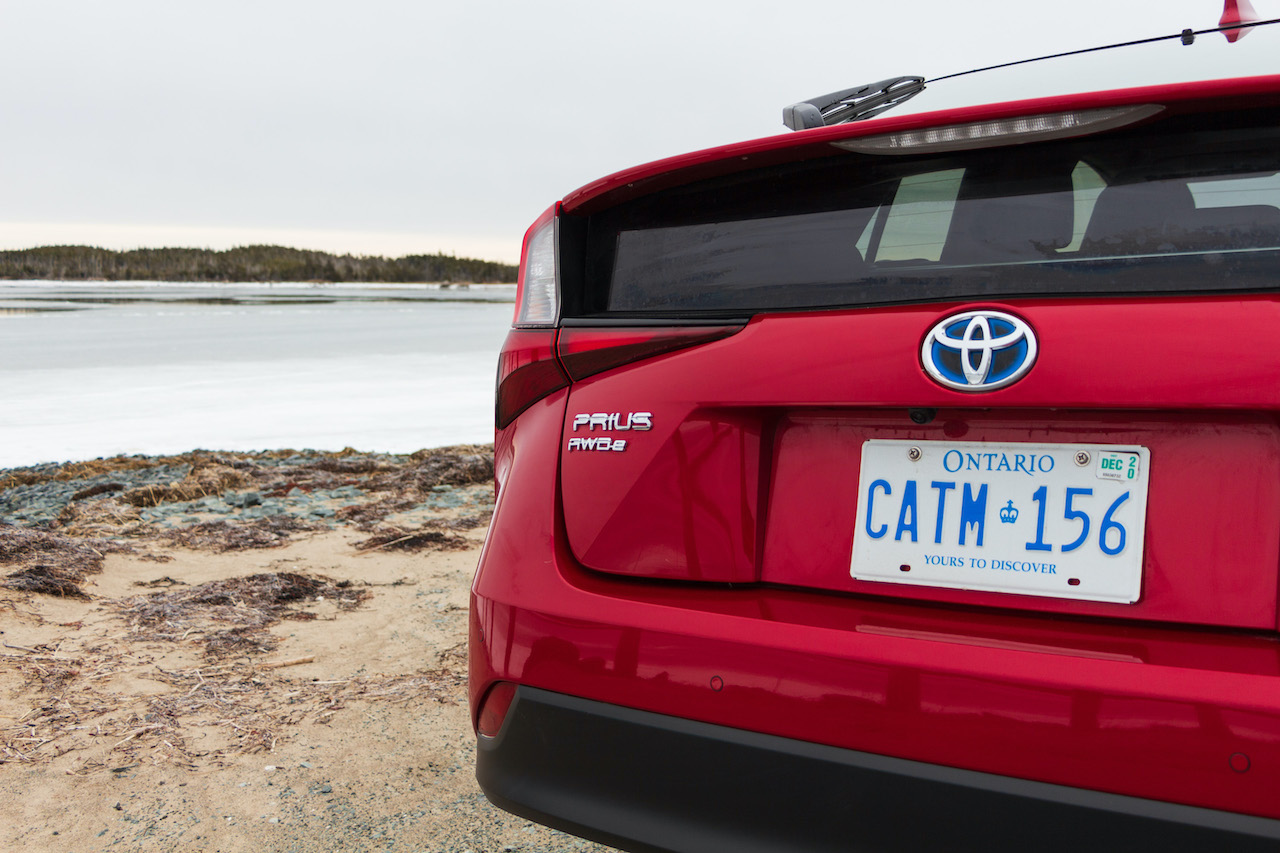 When this generation of Prius arrived, I described it as a hypercar for the masses. A car with a more singular focus than anything that wasn’t destined to live its life on a racetrack because of the strides Toyota had taken to boost efficiency and shave kilos. Lighter seats, lighter wheels, stronger steel, all to eke out a few metres more from every sip of fuel.

That was in 2016, when the EV choices for most buyers meant a range shorter than an average Tour de France cycling stage. Four years on, EVs with a range that would last most Canadians a week or two are available for less than the average new gas car. For buyers serious about saving fuel, that influx of sub $40,000 EVs is difficult to ignore. And that might be the biggest weakness for this current Prius, at least in the high-level spec car I had. The total window sticker on this car was $35,505, and I saw just under 6.0L/100 km according to the computer. Both of those numbers are enough to push a customer toward the full EV.

Even inside Toyota’s own dealer showrooms, the base Prius starts for about $4,000 more than the company’s own, similarly-sized Corolla Hybrid, and the RAV4, a vastly more popular crossover body that comes with AWD standard, rings in at less than this Prius AWD-e.

Toyota’s Prius laid the groundwork that has let the EV enter the mainstream today, showing that a car with an electric motor (even one with a gas engine too) could deliver Toyota-level reliability, have virtually no long-term battery issues, and could be far more economical in the long term than a conventional car. Look around this vehicle and it’s still an impressive combination of technologies, clever design choices, and wind tunnel trickery. One that now is caught in the rift between more conventional gas and hybrid cars, and the next-gen high-tech of electric vehicles. 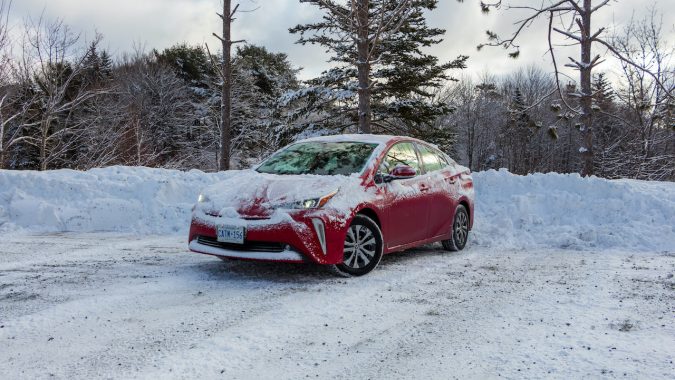 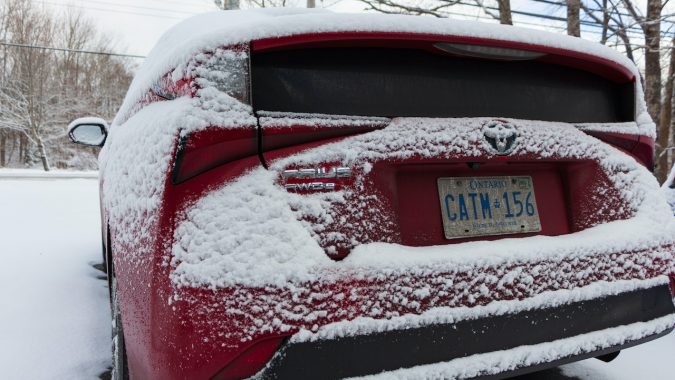 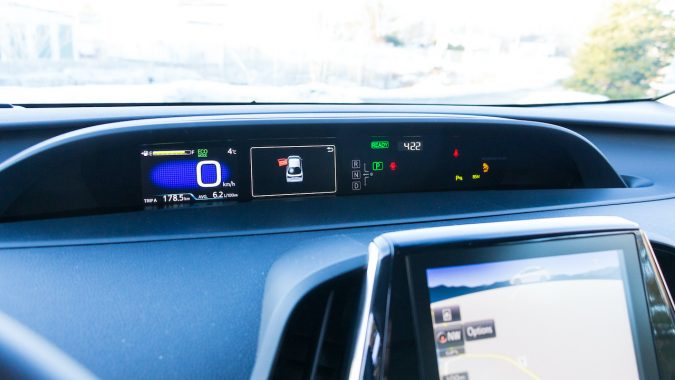 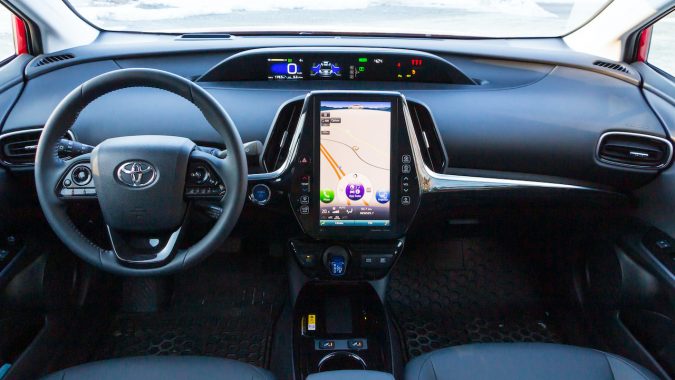 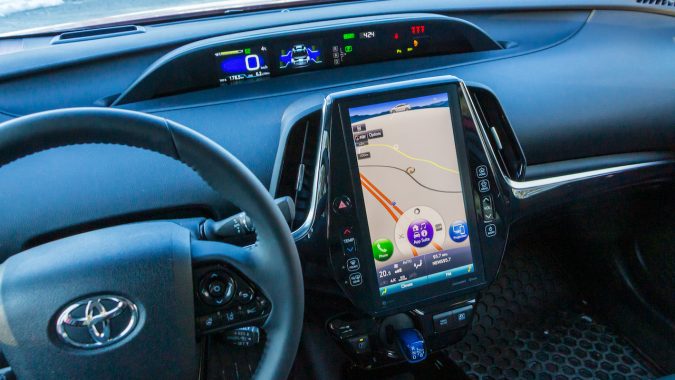 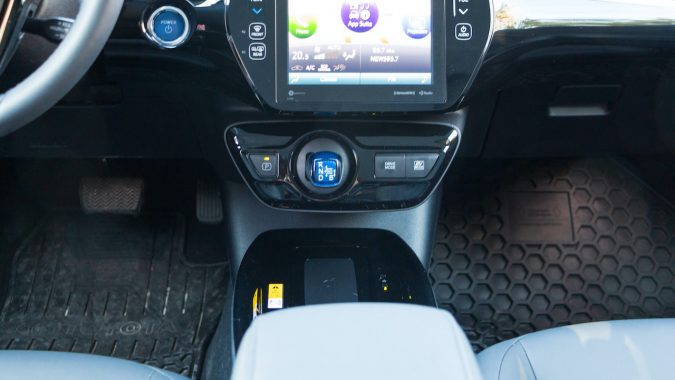 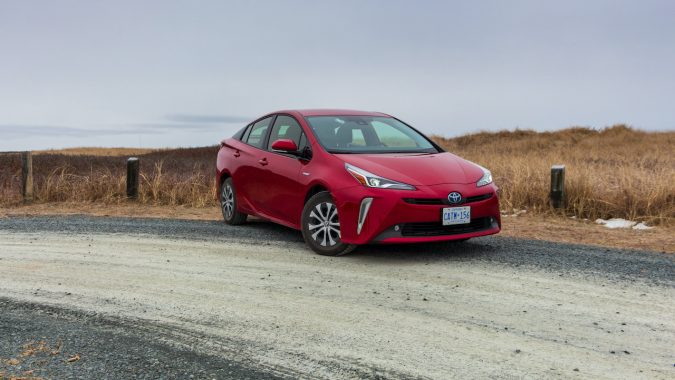 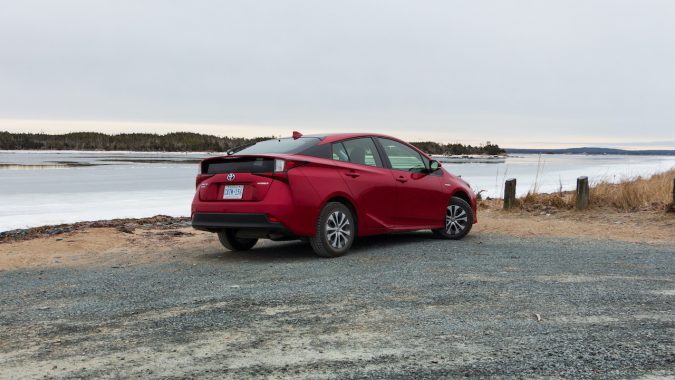 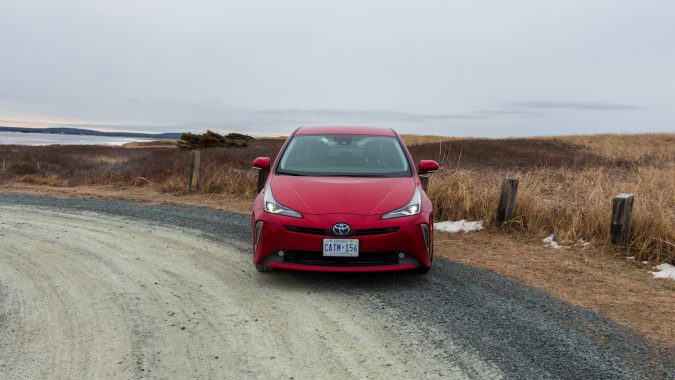 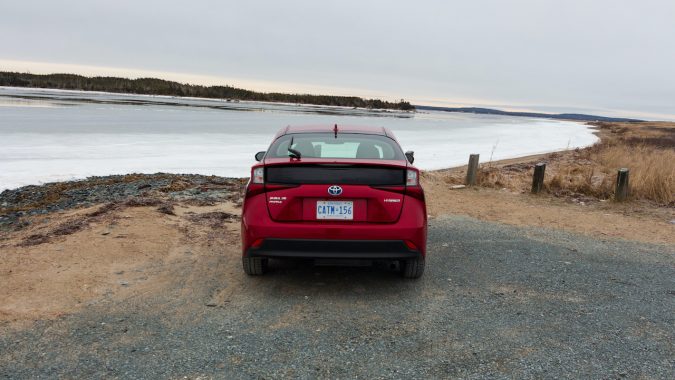 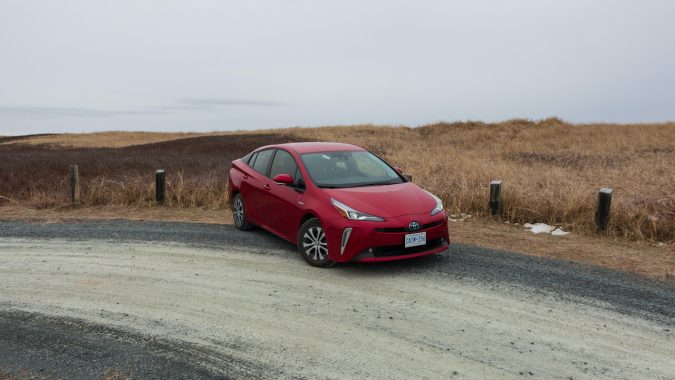 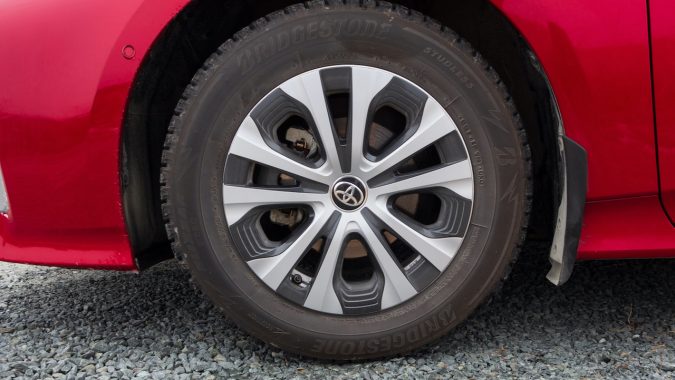