If it weren’t for its worrying build quality, this would be the perfect EV.

It’s hard to talk about electric cars without mentioning Tesla. After all, it did pioneer the modern EV as we know it, and say what you will about Elon Musk’s eccentric behavior, he singlehandedly shook the cages of big-name carmakers to the point where they had to rethink the way they manufacture an automobile.

Then came the Model 3, by far Tesla’s most daring challenge: to manufacture a “people’s electric car”, one that would distill the brand’s unique and super tech-savvy ethos into a more accessible package for the masses.

But then, reality kicked it. Musk quickly found out that mass-producing an affordable car was harder than he expected. The Model 3’s release date was delayed several months due to numerous manufacturing issues, and the final price ended up being more expensive than early adopters had expected.

That’s now all in the past. Even if it took forever – giving time to more mainstream brands to catch up – Tesla’s affordable electric automobile has already been among us for two full years, selling more than 300,000 units in the US and Canada alone since its birth. It proved that it is in fact possible for Tesla to build a car for the people. Except, there’s a little catch.

Even in its most basic form (called the Standard Range Plus) the Model 3 flexes more technology muscle than any other EV it competes against. For starters, its electric motor isn’t like other EVs. Tesla calls it a Permanent Magnet Switched Reluctance Motor, a fancy term to describe permanent magnets that are located within the rotor itself, allowing for up to 10% more overall efficiency than a standard induction-type setup. 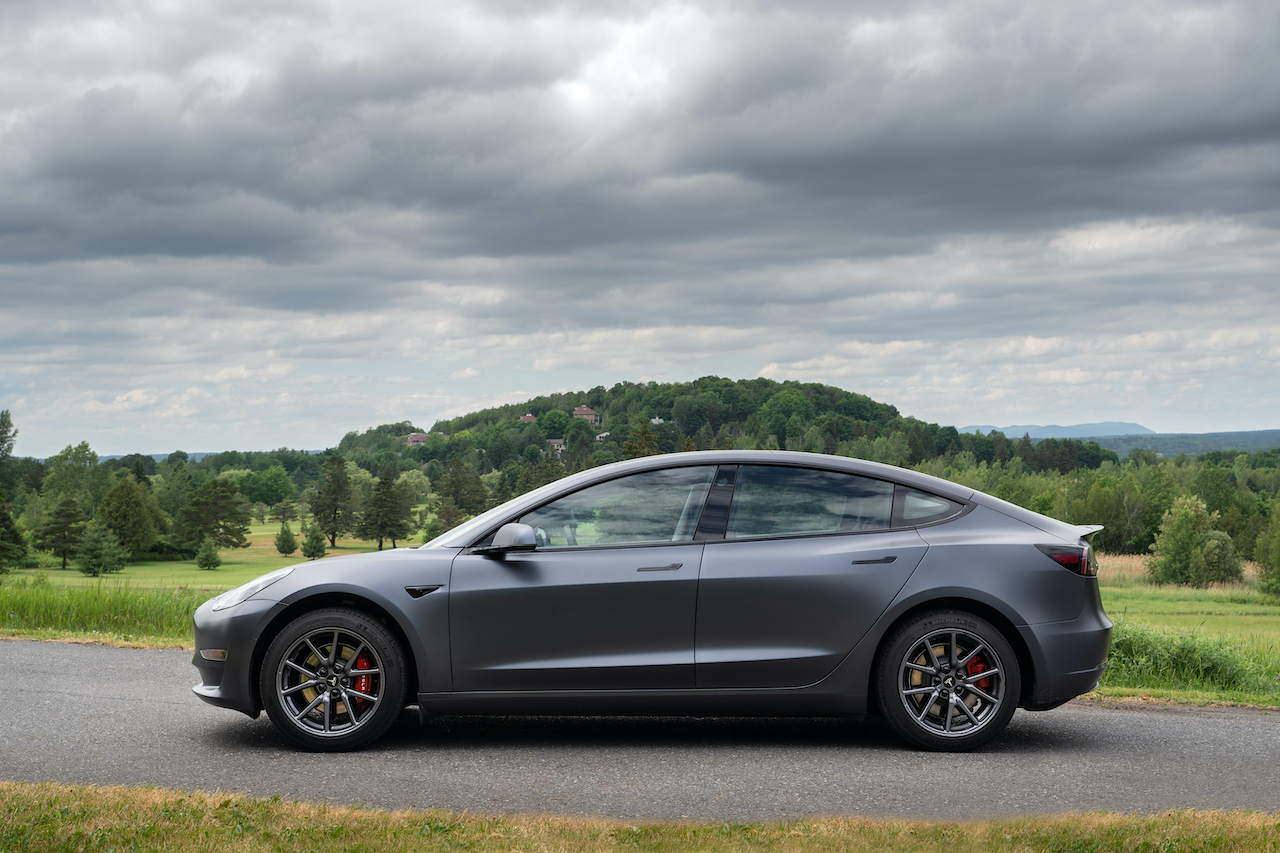 This means that while the Model 3 SR+ is powered by a 53-kWh battery, it offers range and performance that is comparable to 60, 62 or even 65 kWh systems. The result is up to 400 km of available range, which puts it right smack in the middle of other “affordable” EVs like the Nissan LEAF Plus, Chevrolet Bolt EV, Hyundai Kona Electric, Kia Niro EV and Kia Soul EV.

Except, the Model 3 SR+ launches out of the hole faster than all those cars, reaching 100 km/h from a standstill in just 5.6 seconds. With a starting MSRP of $52,990 before applicable rebates, it’s currently the fastest electric car in this price bracket.

And the level of innovation doesn’t end there. Everything about a Tesla is different, from the way you buy the darn thing to how you enter its cabin. The Model 3 doesn’t have a key fob, or a starter button per se. You access it using a mobile app, or a keycard like you would in a hotel. Once inside, the car is already turned on and ready to carry you to your next destination.

Tesla quickly integrates you into its weird, Mars-like futuristic concept of what a car should be. The Model 3 has no physical controls, which gives way to a long and low windshield that vastly improves forward visibility. All available controls from mirror and steering wheel adjustments to the door locks are encapsulated inside a ginormous 15-inch touchscreen, which protrudes from an otherwise clean and unobstructed dash. 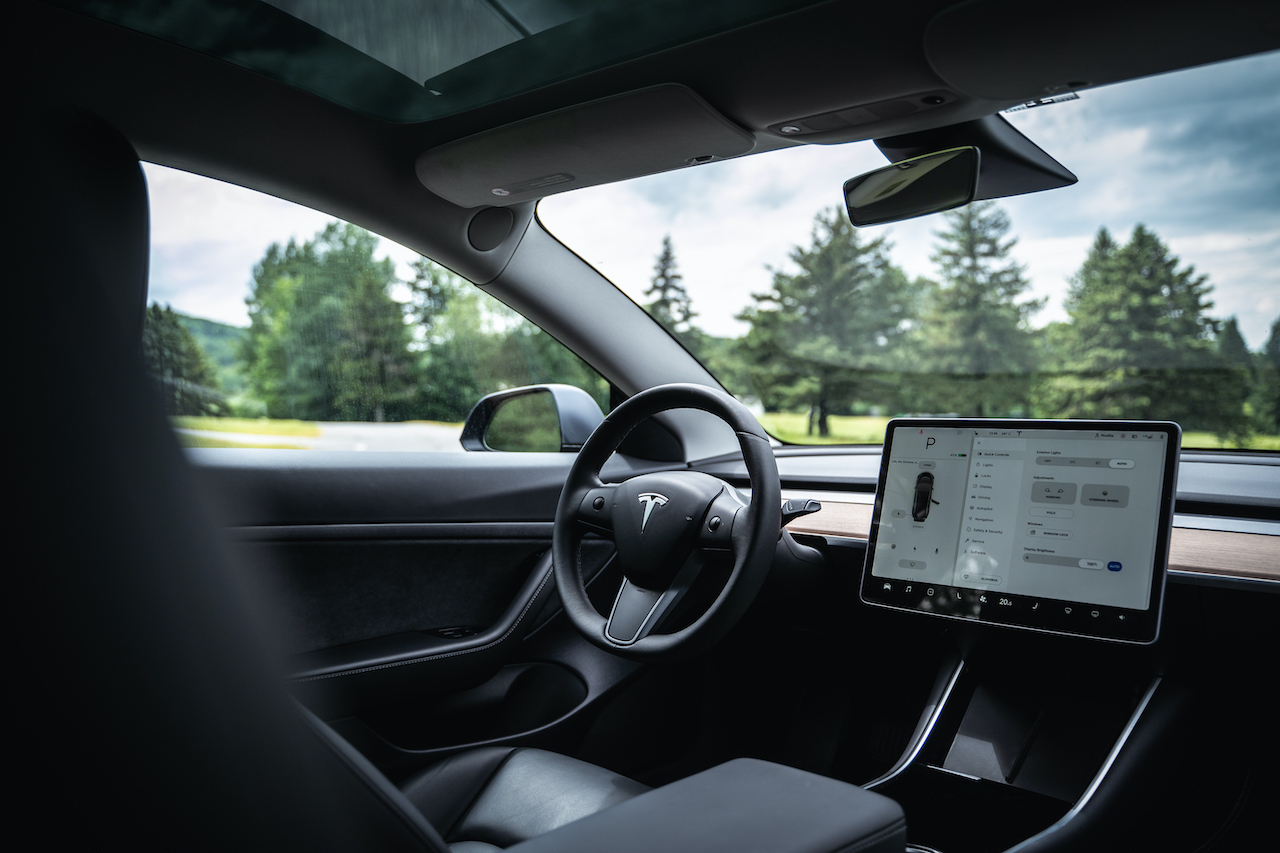 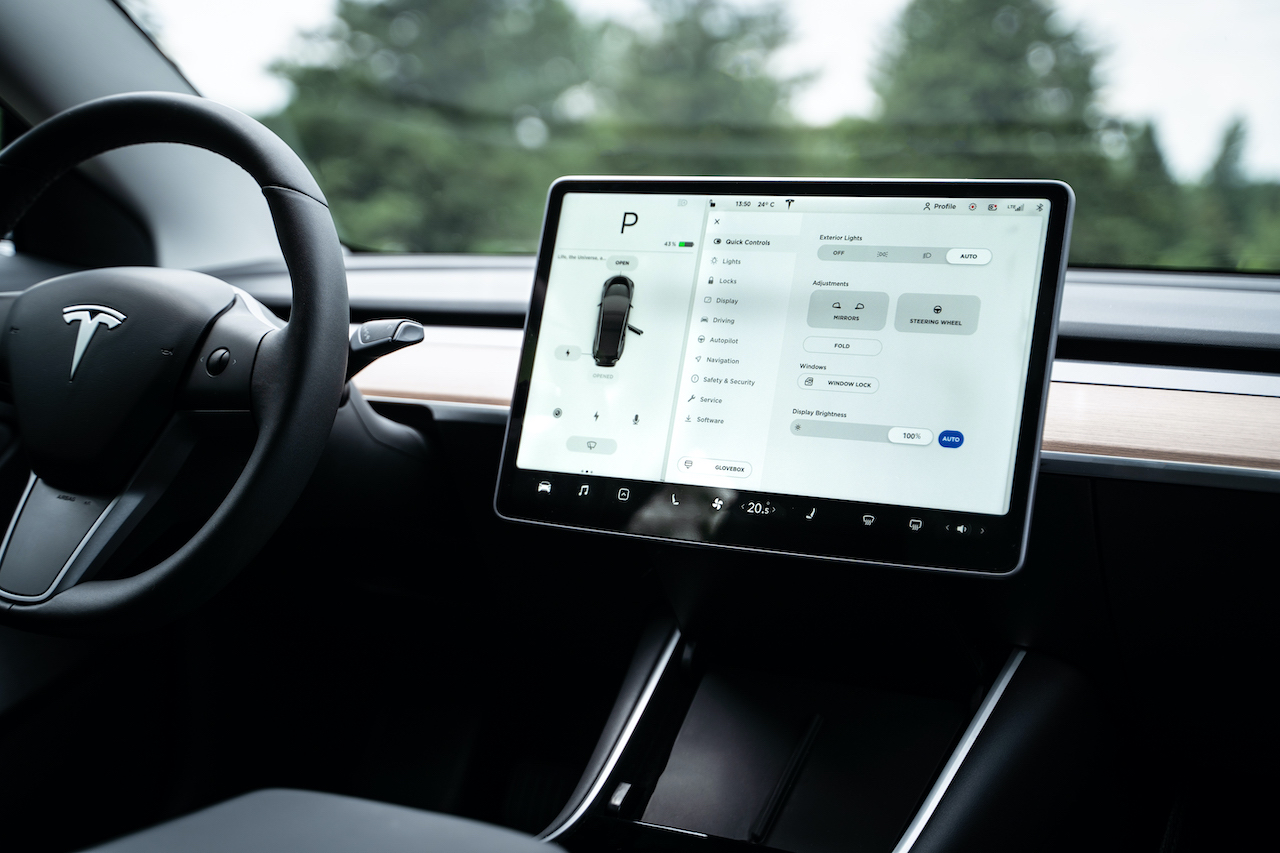 While the lack of physical switchgear can feel overwhelming at first, the screen’s learning curve isn’t as steep as one would imagine. The information is well-laid out and easy to grasp and the screen responds more quickly than most infotainment systems currently on the market, which quickly transforms the experience into a smooth and seamless affair.

The Model 3’s cabin is spacious and inviting thanks to supportive front seats and a panoramic roof that automatically tints in response to the sun’s glare.

To nobody’s surprise, cargo space is ample due to the absence of a gasoline engine. With both the front (frunk) and rear trunks combined, the Model 3 will engulf up to 424 litres of your gear, which is frankly solid considering its size, but still a little more cramped than the unique trunks of a BMW 3 Series or a Chevrolet Bolt EV (481 litres).

On the road, the Model 3 SR+ is smooth, quick, and surprisingly analog. Acceleration is effortless, while the car’s default regenerative braking creates the right amount of resistance for urban driving.

Where the SR+ really stomps its competition is in the way it tackles a corner. The steering is ultra precise and the car responds immediately to the slightest inputs. Give it too much throttle upon corner exit, and yes, it’ll kick out the rear the way a BMW 3-Series would, but allows you to correct its trajectory with the slightest steering inputs. It’s all executed with the utmost accuracy, enhancing the car’s driving excitement.

The 2020 Tesla Model SR+ was proving to be a much more compelling machine than we originally expected. Furthermore, we were having just as much fun driving this laptop on wheels than many gasoline-fed contraptions currently on sale. It’s a truly fantastic automobile this one.

But, then, the problems started creeping in.

At freeway speeds we heard infuriatingly loud wind noise coming from the driver’s side window. It was so bad that we had to check twice if the window was correctly fitted inside its slot.

Then, it was the car’s centre console; that large slab of cheap plastic that occupies the entire cabin’s midsection. It just wouldn’t stop cracking as the car drove over the slightest road imperfections. And don’t get us started about how flimsy the Model 3’s entire structure feels over uneven tarmac. Is this supposed to be a $53,000 luxury sedan? It sure doesn’t feel like one.

At this point it’s important to mention that Tesla doesn’t have press units for journalists to review, which forced us to turn to the Turo car sharing service. Through a mobile app, the service allows you to rent someone’s vehicle for an entire day, or even a weekend. Because this bargain basement 2020 Model 3 2020 SR+ only had 6,000 km on tap, we felt it was fitting for our test. 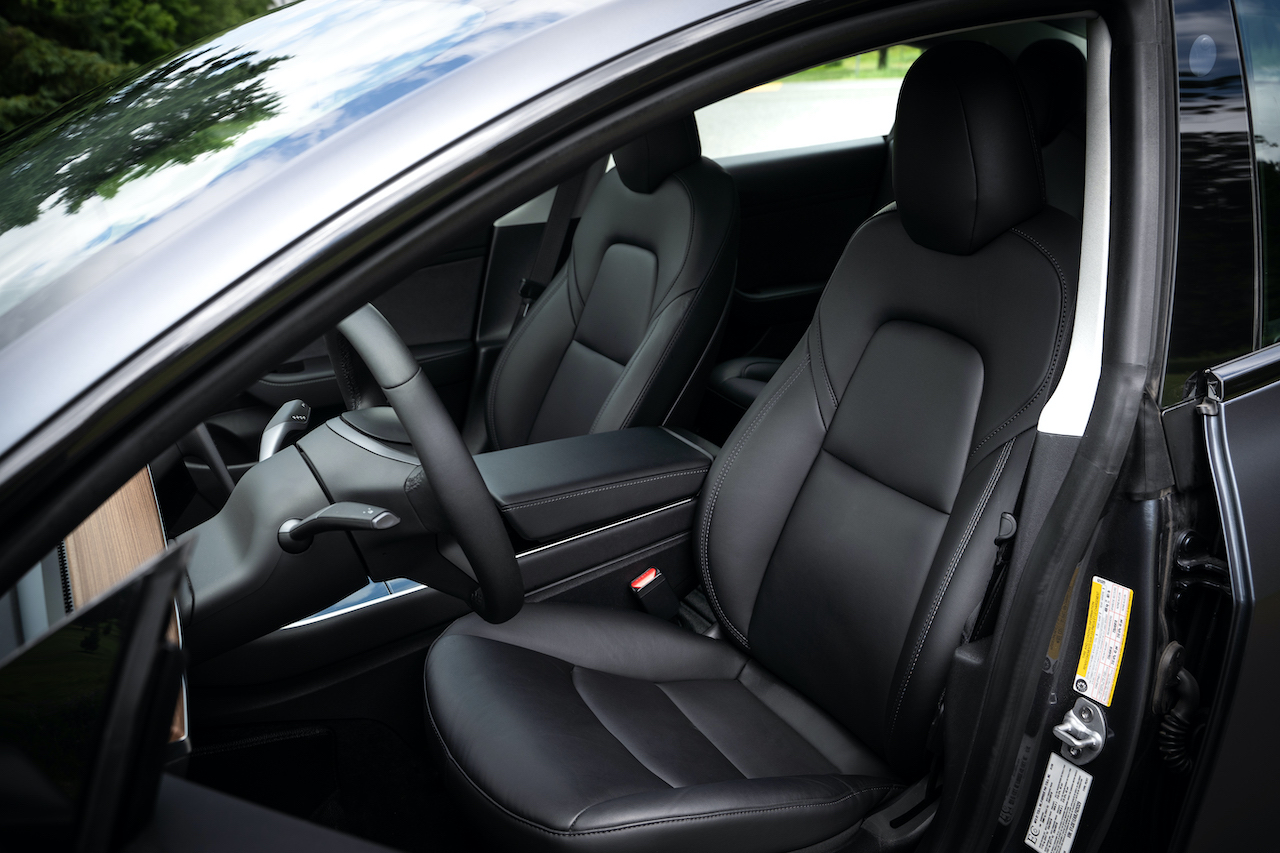 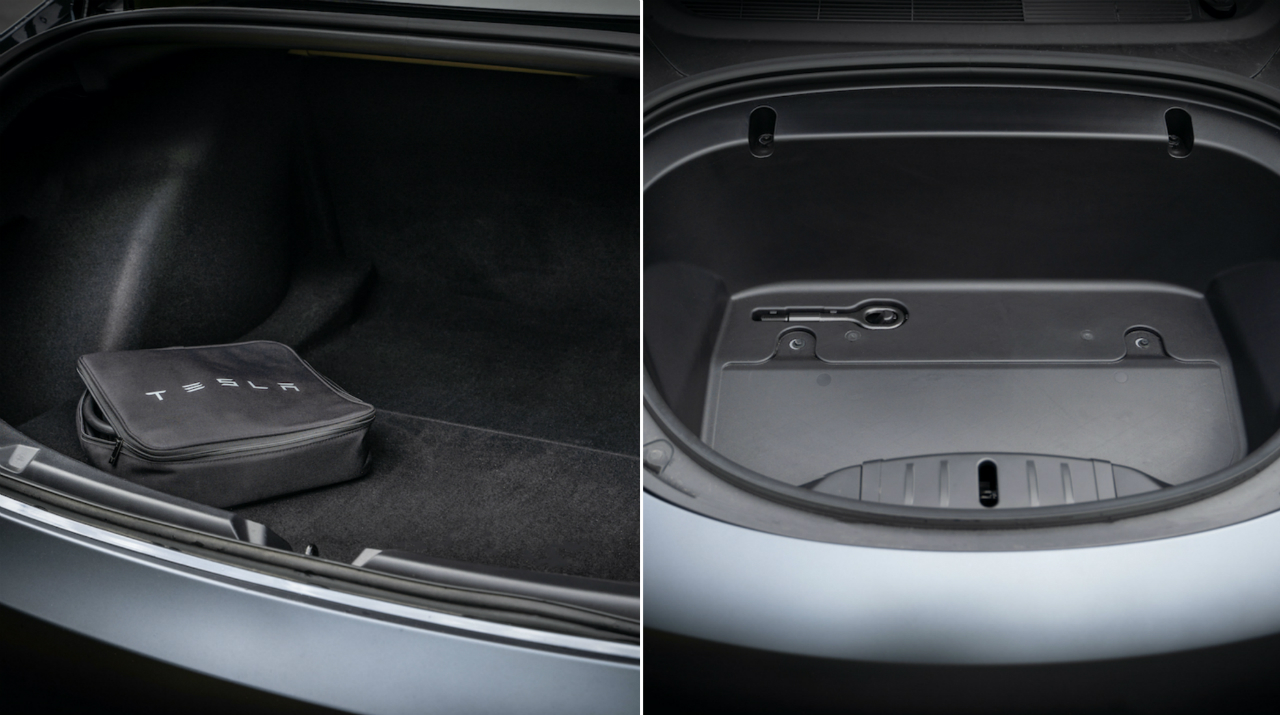 The cabin issues could have been forgiven considering Tesla isn’t yet a big player in this game. Indeed, kudos goes to this California-based startup for manufacturing a device so technologically advanced that it instantly makes you wonder why big-name brands haven’t gotten there first.

Unfortunately, our issues with the car didn’t stop there. Once parked at the Tesla Supercharger to juice up our battery, we took the time to properly observe our example’s build quality. We weren’t entirely surprised to notice the wrap that was protecting its body, as the Model 3 is notorious for its bad paint quality that peels off the rocker panels after a few Canadian winters.

Tesla still doesn’t offer a solution for this by the way, leaving many owners stranded with a car that’s shedding its own skin. A wrap, or, in some cases, mudguards, seem to be the best fix owners have come up with.

What we weren’t expecting were the immense panel gaps and uneven assembly on each side of the car. We spotted a rear driver side door that didn’t properly align with the body, and rubber moldings of uneven thickness around the car’s openings.

Then, another Model 3 owner pulled up next to us, and his situation was even worse than ours.

Christophe Murphy has had his Model 3 SR+ for less than a week, and he’s not a happy camper. For starters, he purchased his SR+ before June 30th, which, according to Tesla, would grant him access to free Supercharging for the first year of ownership. Yet, his car isn’t equipped with the feature. All attempts to contact Tesla on his part about this have so far failed.

Murphy then showed us his car’s build quality, which wasn’t any better than ours. We spotted an uneven passenger-side C-pillar, a driver-side mirror that doesn’t properly align with the front fender and A-pillar, and a rear door that doesn’t operate the way it should due to the way it has been fitted. 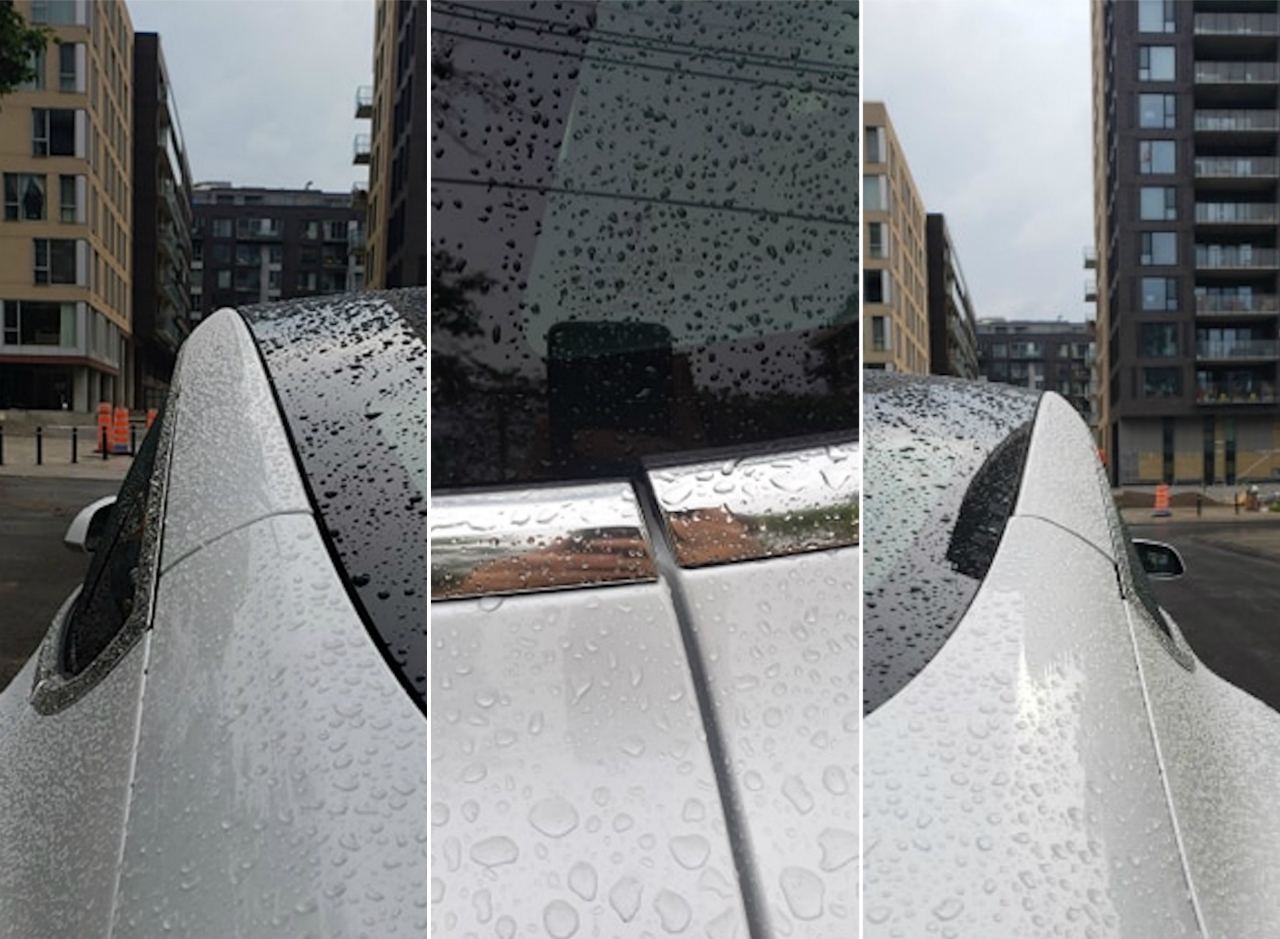 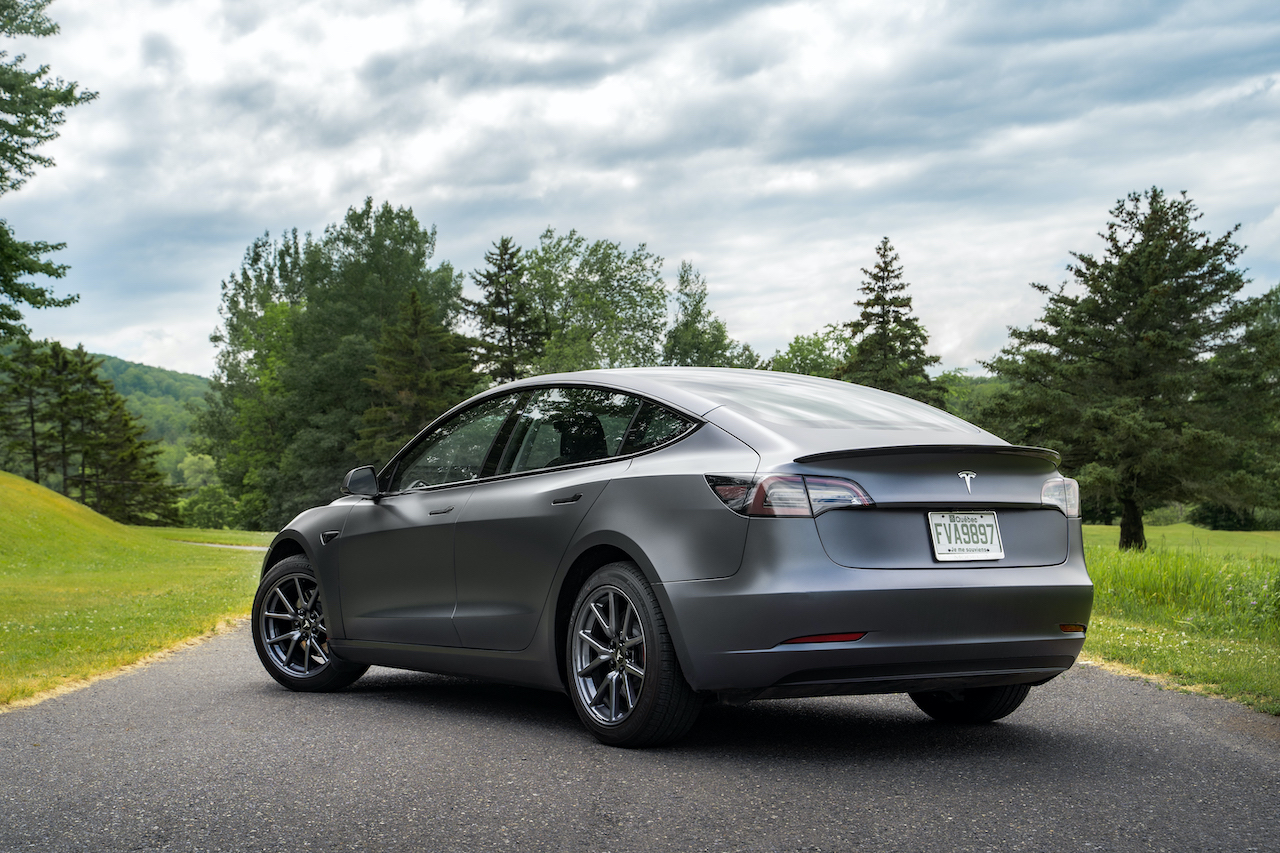 Christophe then carried on telling us that his grandfather also owns a Model 3, which is also a victim of bad paint. Within 24 hours, we had spotted three examples. And all of them had serious issues.

This brings us to the following question: if these manufacturing flaws would have appeared on any other car, would you be so forgiving? We wouldn’t, which is why although we have tremendous respect for everything that comes out of Tesla’s Fremont plant in California, and admire how the brand has reshaped the automotive landscape, we simply can’t excuse pitfalls such as these, especially in a car that’s supposedly aimed at the middle class. 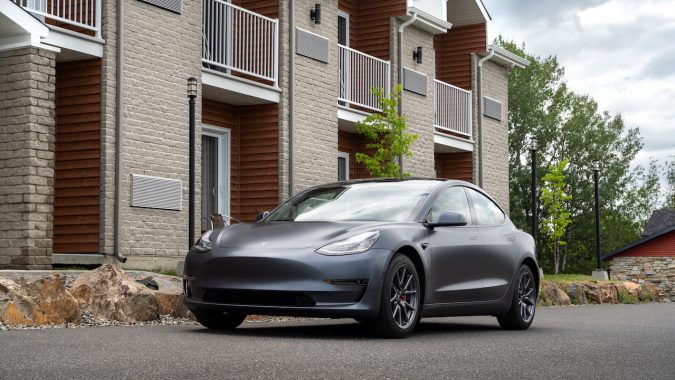 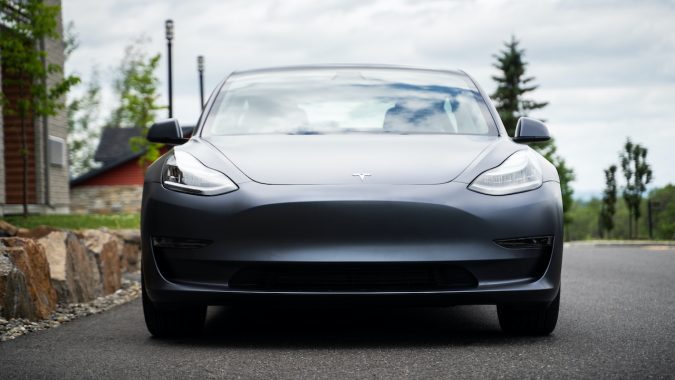 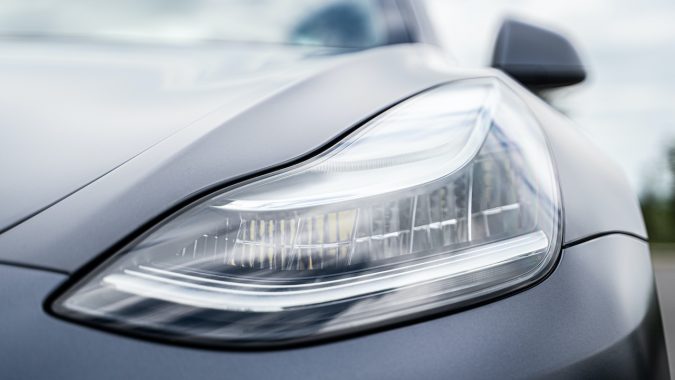 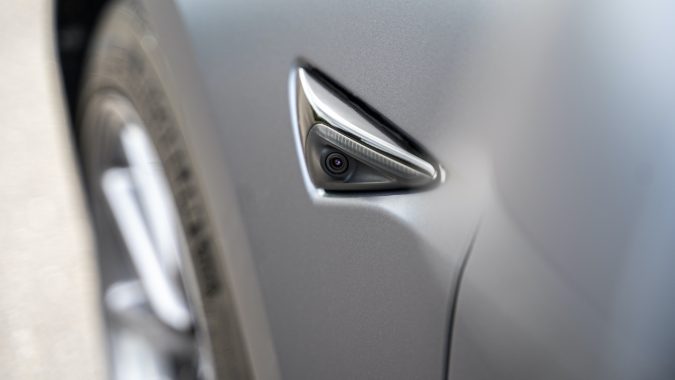 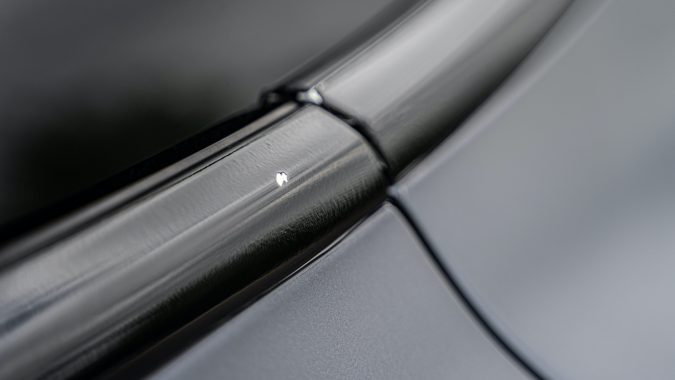 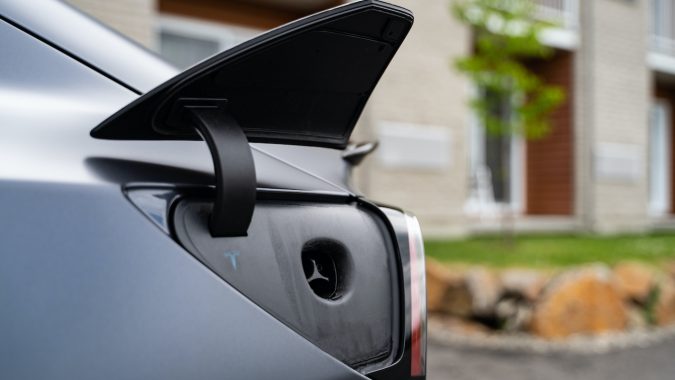 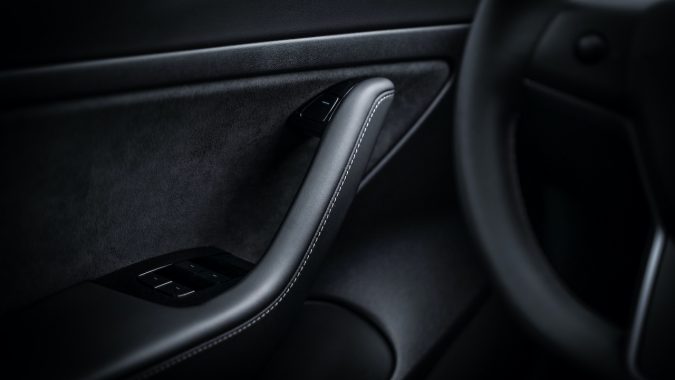