Nothing brings the bros to the yard like a world rally blue pearl WRX. I swear that whenever I book one of these things a notification goes out to all Subie fanboys as soon as I’m within city limits.

They love them some WRX, and they must come to investigate / stare / snap a photo / bask in its glory at some point during the seven-ish days it sits in my parking space. I really should mount a camera to capture this stuff, but I digress.

All joking aside, I get it. The WRX is a lot of fun to drive, especially in snow. The forum board lust this car generates is a bit weird and intense, but I appreciate the appeal. What I hope to impart here, however, is an assessment of the WRX from the perspective of someone who doesn’t self-identify as a fan.

It is important to note at the outset that the WRX is no longer a part of the Impreza family. Subaru separated WRX and STI variants from the main Impreza line when the current cars were introduced in late 2014 as 2015 models. Consequently, the current WRX models are mechanically related to the fourth generation Impreza, not the current fifth gen which was all-new for 2017.

This means the Impreza is built on the Subaru Global Platform that underpins all models (apart from the joint venture BRZ), while the WRX is not. The benefits of the Global Platform include better ride and handling, improved structural rigidity, reduced NVH (noise, vibration and harshness), improved crashworthiness and a scalable architecture. 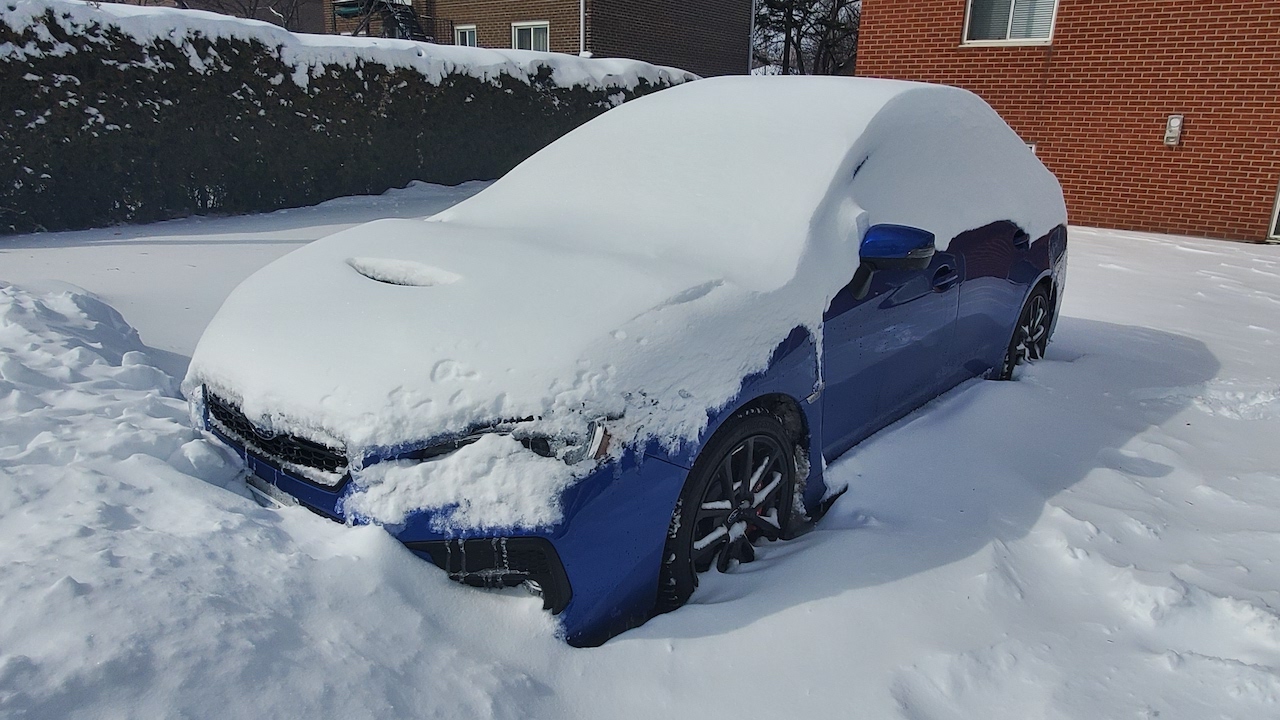 For 2020, the WRX is offered in four trims for Canada: WRX, Sport, Sport-tech and Sport-tech RS. As you may have guessed, the main differentiator among them is standard equipment, with the sport tech models having the most stuff, albeit for more money.

For the purposes of this review, Subaru Canada set me up with a Sport-tech RS in World Rally Blue Pearl that retails for $39,695. No optional kit has been added (a rarity for press cars), but among its standard features are LED headlights and fog lights, 18-inch cast aluminum wheels, Brembo brakes, Recaro performance front seats finished in Ultrasuede and leather, heated front seats, sunroof and a 7-inch infotainment display with embedded navigation.

Subaru has blunted some of the harsher boy racer aspects of the WRX’s styling in recent years, but the car retains a certain caffeinated character. So, while there’s no giant wing spoiler, the WRX still has familiar design cues its fans love: large hood scoop, side skirts, big black wheels, red Brembo brake calipers and, of course, a quad tip exhaust. 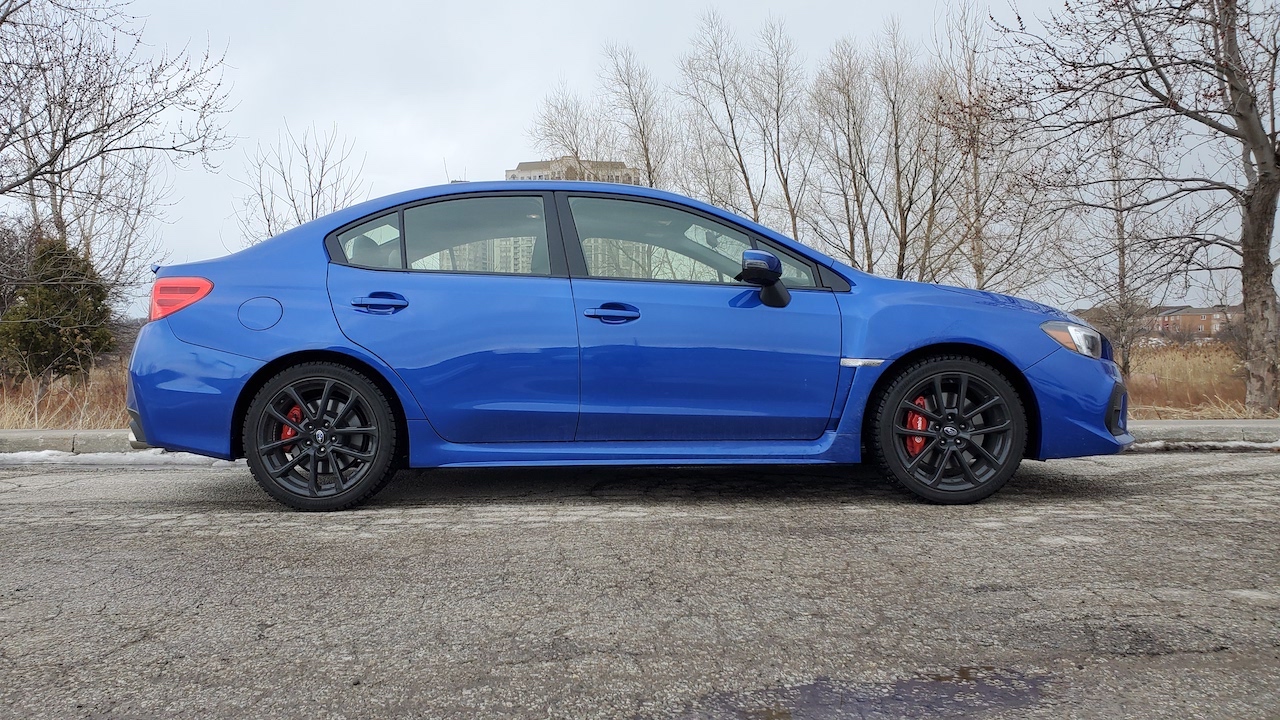 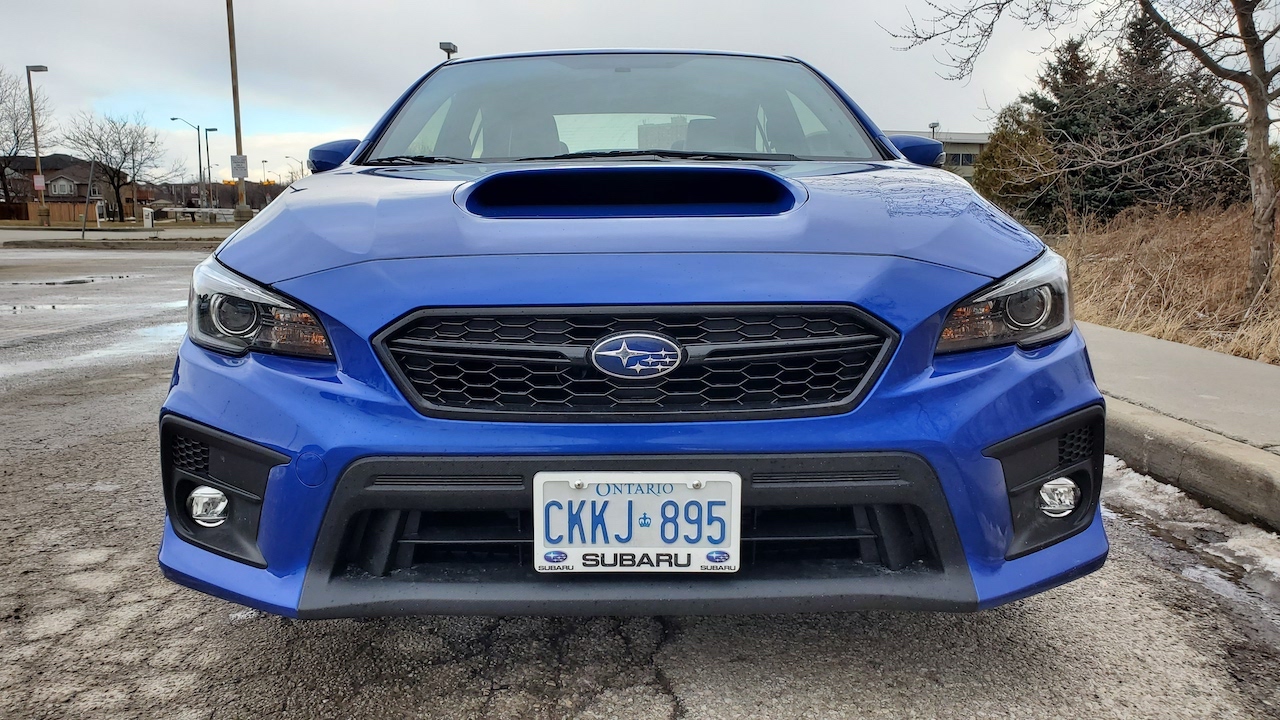 As someone who’s aged out of the prime WRX buyer demo, I think this more restrained version of the car looks good. It’s not really for me, per se, but I didn’t feel too old while driving it either. Scrolling through the STI range on the Subaru Canada website left me with a bit of a different feeling, however.

Despite aging well generally, the current car feels a bit dated which means a new WRX should be revealed soon. Various reports suggest the next gen model could be revealed sometime this year, but as of this writing Subaru has yet to confirm its plans. Stay tuned.

Since the fourth gen car debuted in 2014, Subaru has made improvements to the WRX’s interior and, overall, I think it’s a reasonably inviting space. The grippy Recaro Ultrasuede seats are comfortable and very supportive, but aggressively so – getting in and out of them doesn’t require an unusual amount of dexterity. The cabin feels roomy overall, with good amounts of head and leg room owing to the car’s boxy sedan profile. 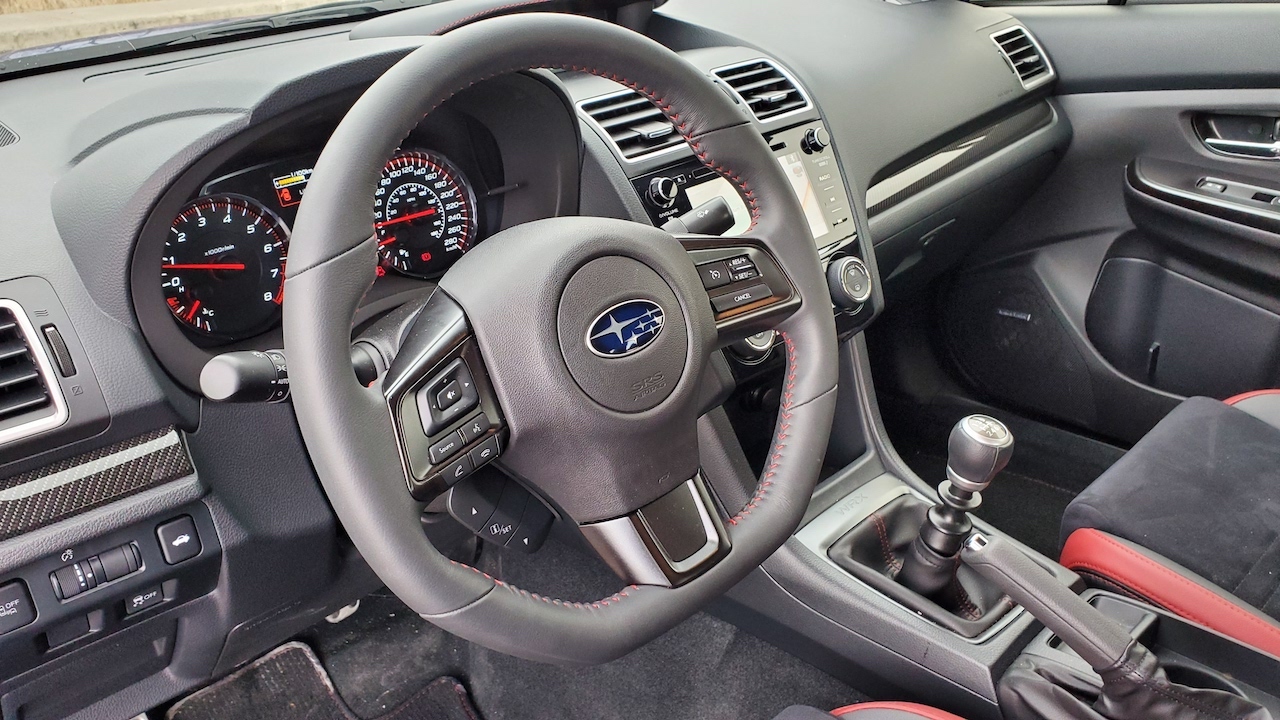 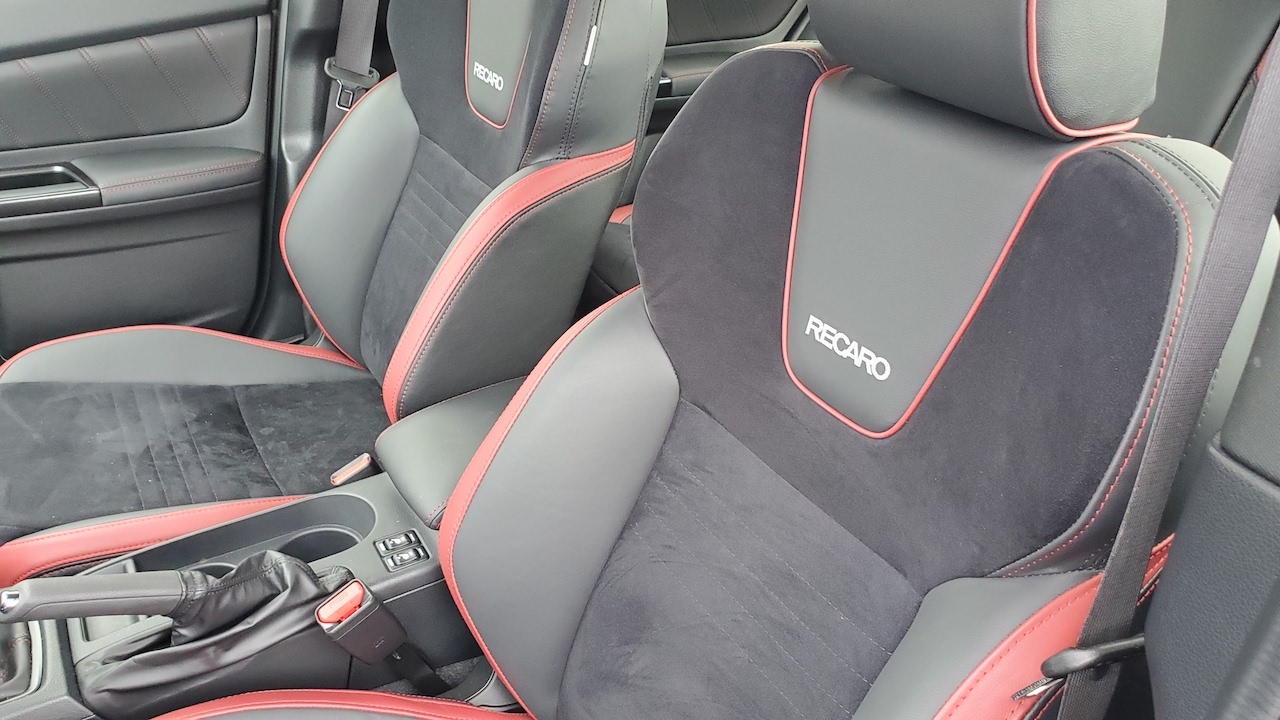 Elsewhere, the WRX’s cabin is generally well laid out and handsomely finished. Controls and switches are generally straightforward and easy to use. Details such as red contrast stitching on the steering wheel, metal pedals (including the dead pedal) and carbon fibre inserts on the dash panel fit well with the car’s sporting character, even if the latter pieces are plastic. They look good, at least.

There’s not much to complain about here overall, although the shorthand Subaru is using in the instrument cluster menus left me scratching my head. Honestly, I wasn’t sure what I was adjusting as I couldn’t understand what the acronyms meant. I fiddled with the steering wheel-mounted buttons for a while before giving up. These menus need to be reworked and simplified. 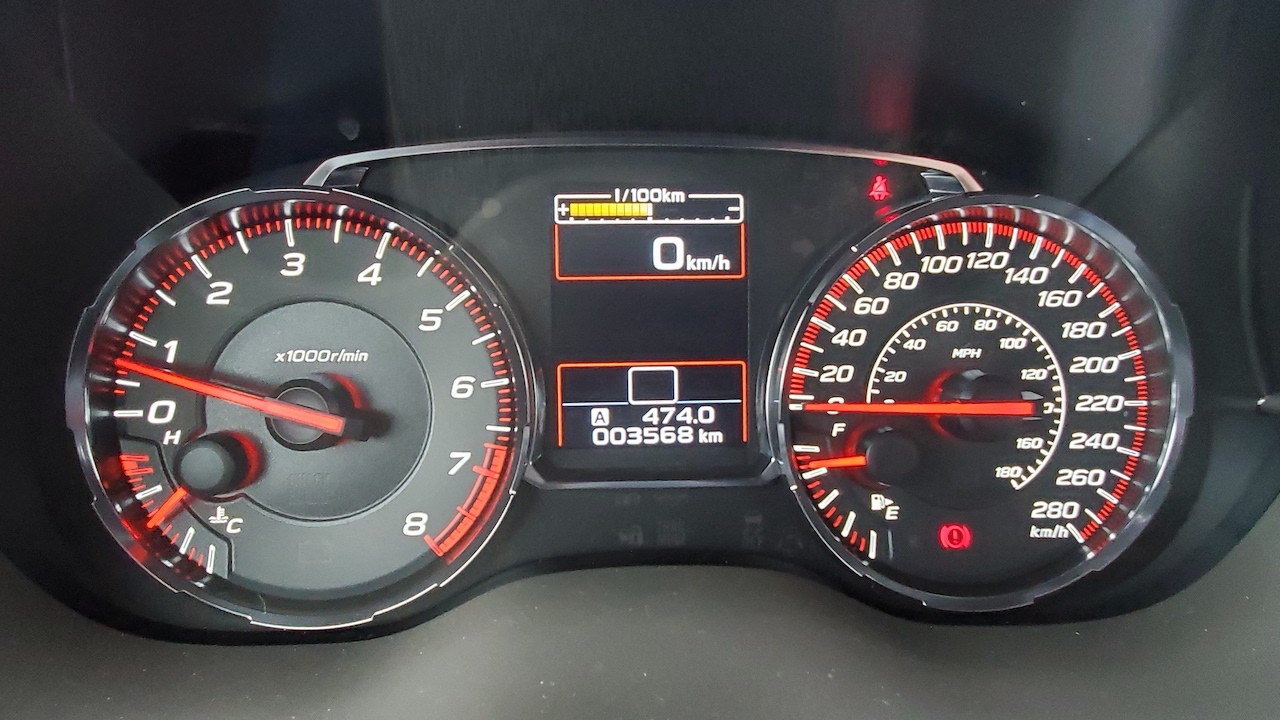 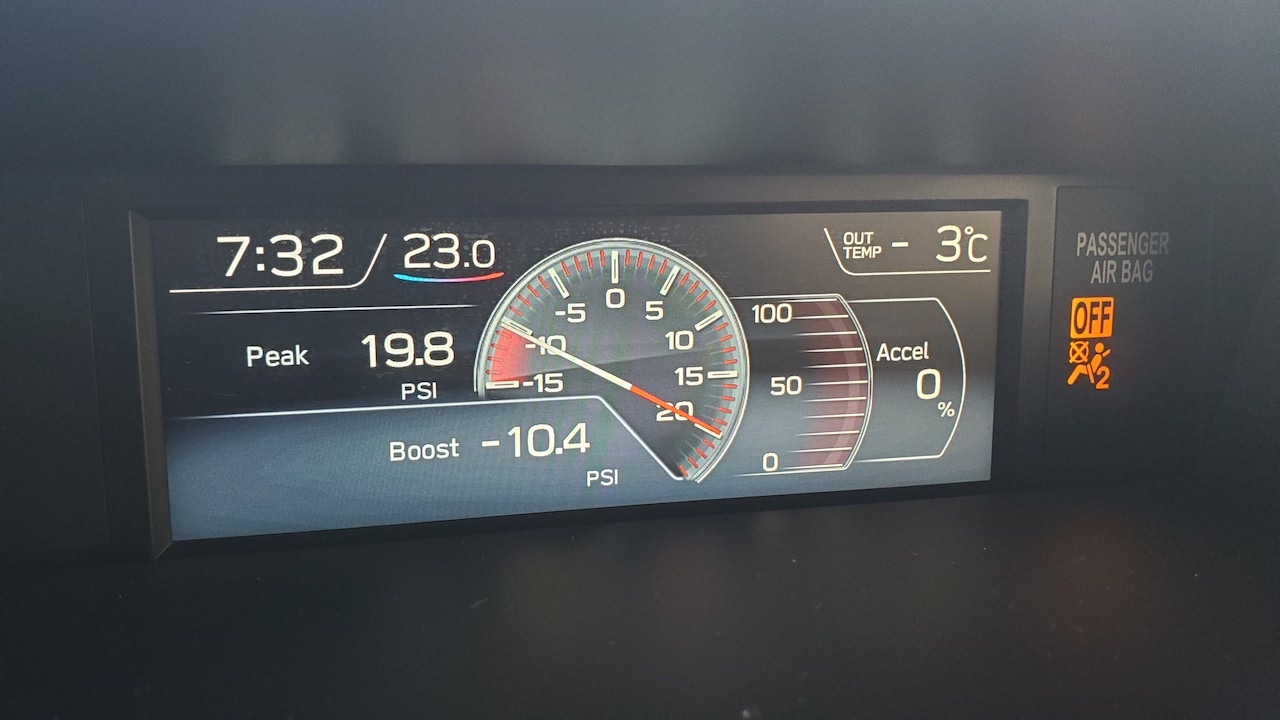 The long and short of it is, I couldn’t find fuel consumption data, which was truly baffling. The green and yellow bar is entertaining to look at, I guess, but it provides no useful information. I discovered after returning the car that fuel consumption data is housed in the upper dash display, but you must scroll through a menu on the infotainment screen to change it as the default at start up is a collection of boost gauges. Might want to change that or, like most modern cars, relocate it to the instrument cluster where it belongs.

As one might expect, the WRX is a lively performer. From the low bass rumble at idle, to its smooth clutch / shifter engagement and the onrushing surge of power from the 2.0-litre turbo Boxer, the WRX can boost the confidence of any driver on a daily commute. Its ride is harsh as you’d expect, but that trade off delivers handling that is very crisp and responsive, even on winter tires.

I didn’t test this WRX on a closed course, but I’ve driven this generation on track in both regular and STI form in the past, and I can attest that its level of handling precision is quite impressive. This is due to Subaru’s proven full-time symmetrical all-wheel drive system with its viscous-coupling limited-slip centre differential that flattens cornering and maximizes grip. And you really feel it at work on track.

As mentioned, the WRX’s ride quality is stiff, and its cabin isn’t the quietest, but these too are trade offs that exist in all performance cars to some degree. They aren’t dealbreakers for the WRX, in my view.

It snowed during the week I had the WRX which made local driving more interesting. Now, before anyone gets the wrong idea, I wasn’t doing donuts in parking lots or on public roads. I did, however, manage to get a little sideways with careful application of the throttle at low speeds, which was quite fun. The mini drifts I pulled were nothing compared to what the WRX’s legendary rally drivers perform, but the small taste I experienced was nevertheless enjoyable.

The WRX is a brand identity car for Subaru and it provides an ideal showcase platform for the carmaker’s well-regarded Boxer engine and AWD technology.

As we eagerly await official news about the next-gen model and contemplate what a move to the Subaru Global Platform will mean for its future, we should appreciate what the WRX is today. While it isn’t by any means cheap, it delivers a package that works well as a daily commuter and weekend track warrior that doesn’t break the bank. 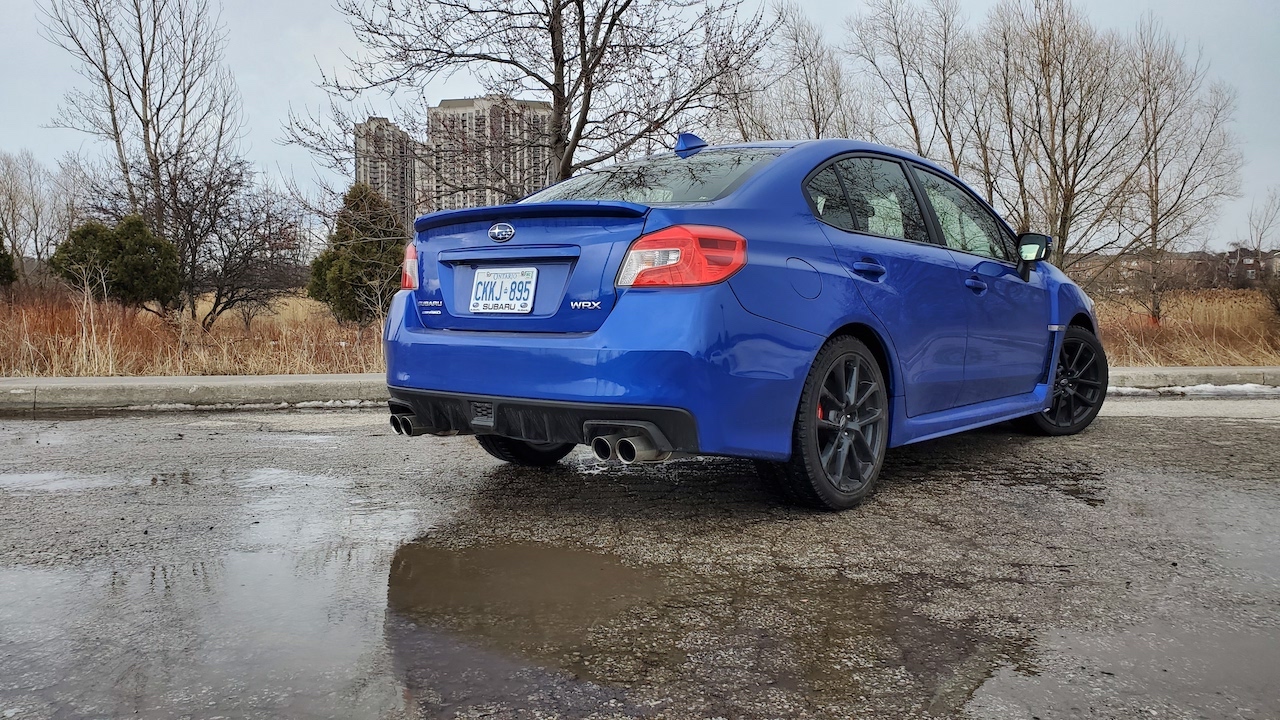 In that regard, the WRX feels like a bargain – a track toy with a useable back seat for your kids and a trunk big enough for Saturday afternoon treks to Costco. Yeah, it still has a Fast & Furious vibe about it (especially in world rally blue pearl), but years of refinement have smoothed off just enough of its rougher edges for it to truly become a car for the everyday. 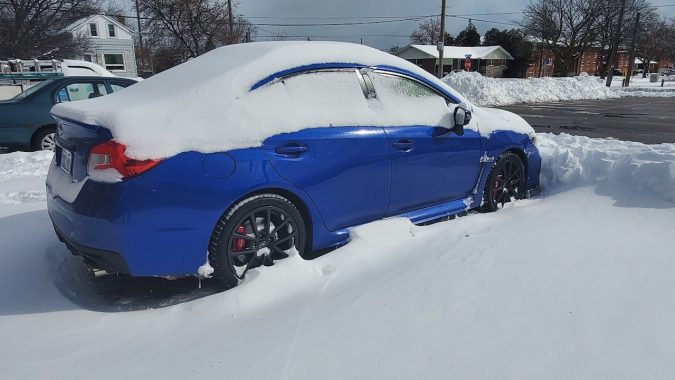 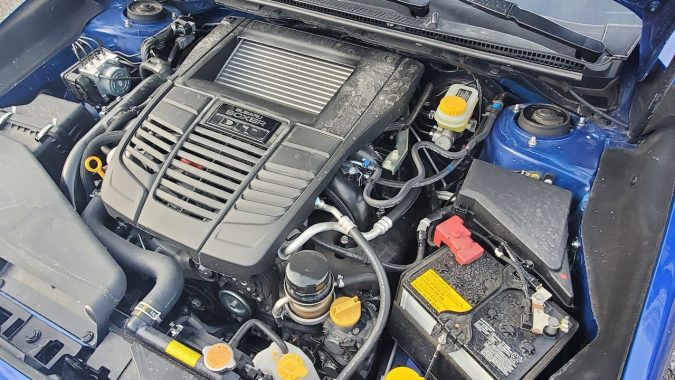 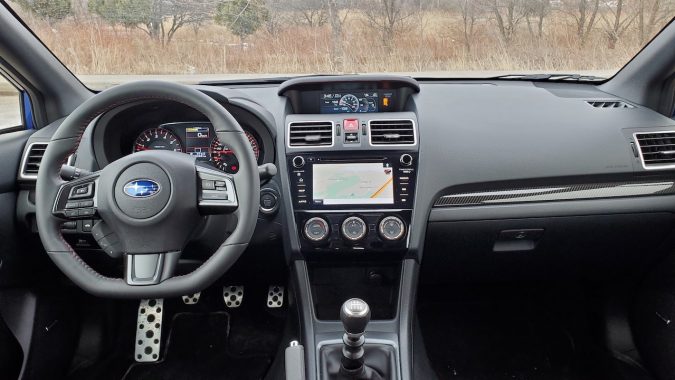 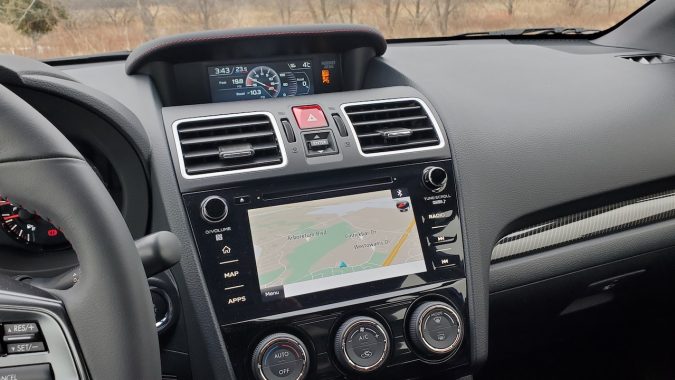 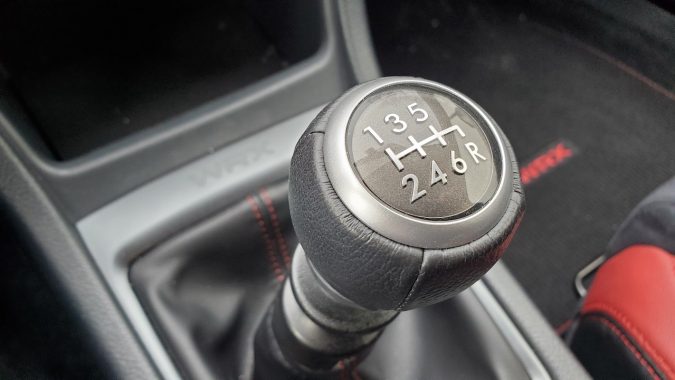 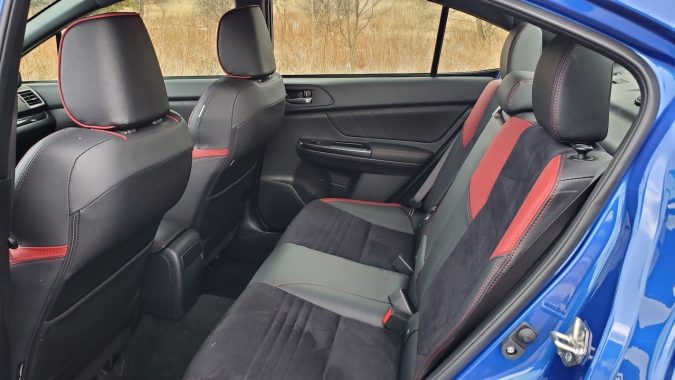 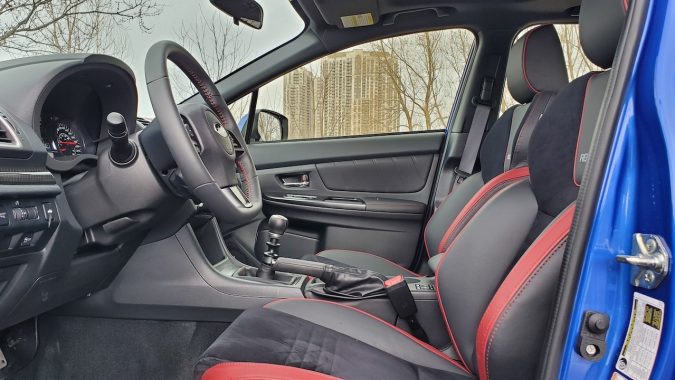 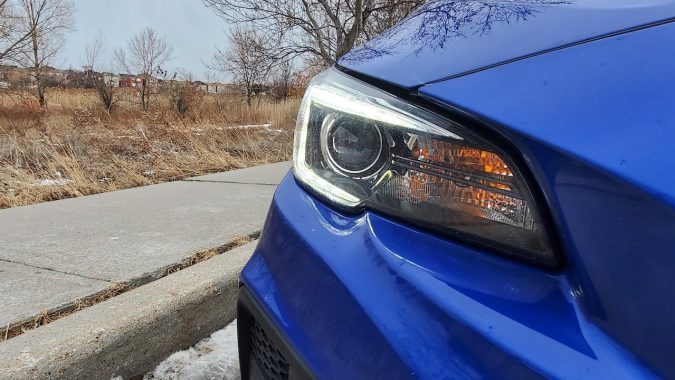 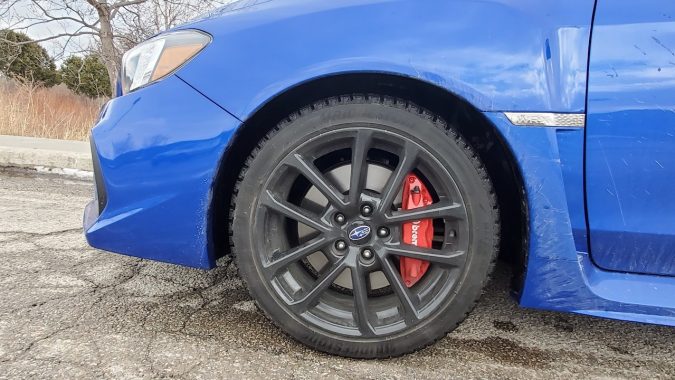 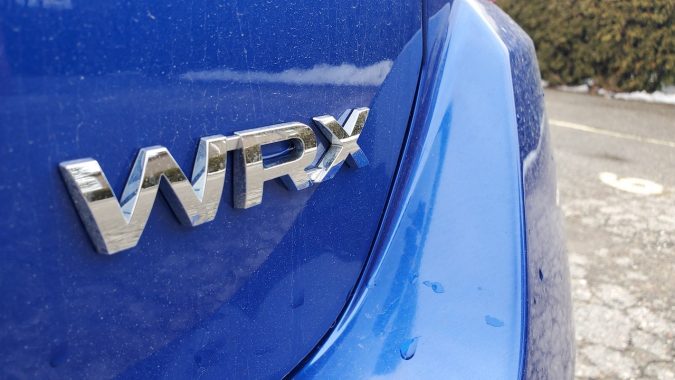 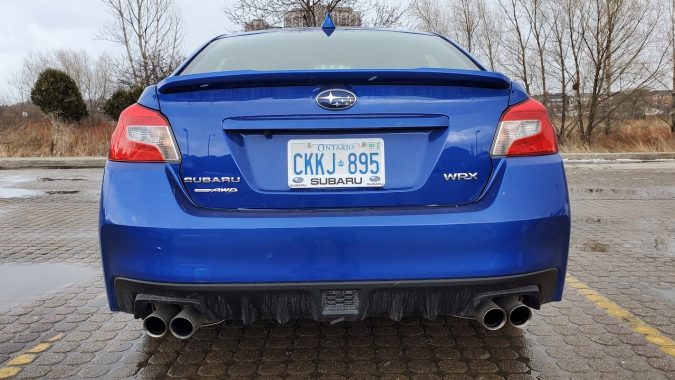