If you were looking for a vehicle emblematic of the rise of the car-based crossover in North America, the Subaru Crosstrek is exhibit A.

Introduced in 2012 as the replacement for the Outback Sport, the subcompact Crosstrek has ridden the wave of shifting consumer preferences towards crossovers all the way to the top of Subaru Canada’s sales charts, where it accounted for 15,184 units in 2019. It’s a similar story in the U.S. where its 131,152 sold trailed only the Outback and Forester last year.

Now in its second generation, the Crosstrek is related to the subcompact Impreza sedan and hatch, and rides on the Subaru Global Platform which underpins both. For 2020, there are seven models available in Canada, ranging from the Convenience manual, to the range-topping Limited.

The basis for this review is the flagship Limited model, which I recently spent a week driving courtesy of Subaru Canada. 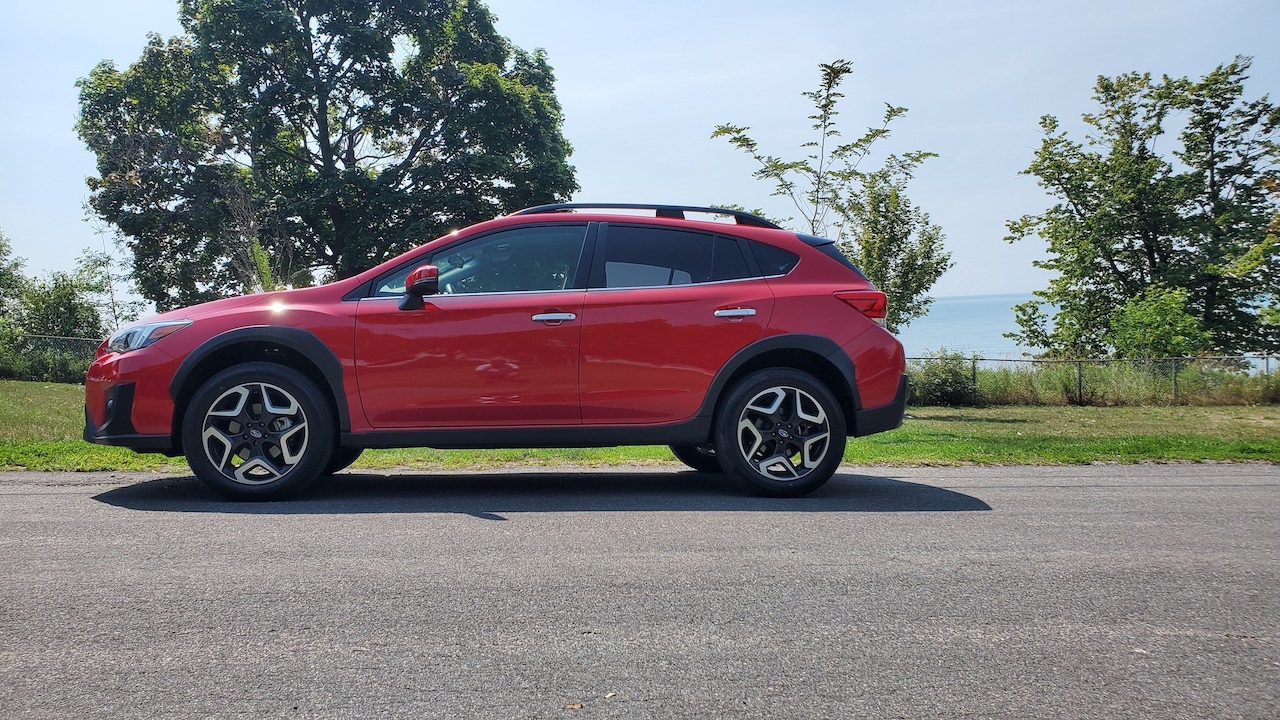 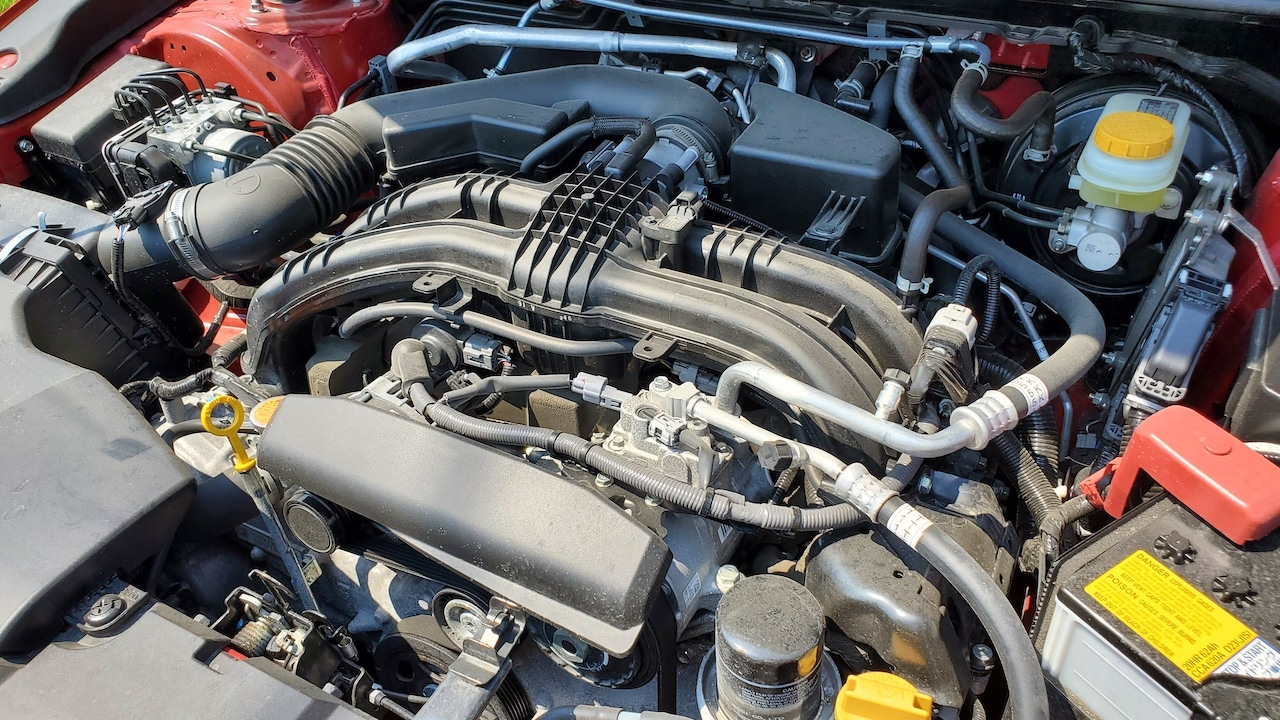 Powering all 2020 Crosstreks is a 2.0-litre flat 4-cylinder engine that produces 152 horsepower at 6,000 r.p.m. and 145 lb-ft of torque at 4,000 r.p.m. Subaru’s full-time symmetrical all-wheel drive system is standard on all trims. In terms of power delivery, a six-speed manual transmission is available on Convenience, Touring and Sport grades, while a CVT can be had with all models and is the only option for the Limited.

The Crosstrek rides on a four-wheel independent suspension, with MacPherson struts up front and a double wishbone in the rear. My Limited tester also comes standard with hill descent control, 220 mm (8.6-inches) of ground clearance and Subaru’s X Mode, which is designed not only for traction on off-road trails but also for stability on snow-covered roads and other slippery conditions.

From a performance standpoint, the Crosstrek is a bit lacking. The 2.0-litre four is fine for scooting around town, but acceleration lags until the throttle is mashed, which could make for some tricky highway merging. The presence of SI (Subaru Intelligent) Drive helps somewhat, with two settings (Intelligent and Sport) that can be toggled via steering wheel button. In Sport mode, engine revs are bumped for more responsive acceleration which makes the Crosstrek feel faster, although only by degree.

Subaru emphasizes safety and the Crosstrek is a good example of the mindset. My Limited test vehicle is loaded with safety technology including EyeSight, the company’s sophisticated windshield-mounted camera system which monitors the road in front to provide driver assistance in four ways: adaptive cruise control, pre-collision braking, pre-collision throttle management (cutting engine power), and lane departure and sway warning. EyeSight is available on all grades and is standard issue with the Limited. 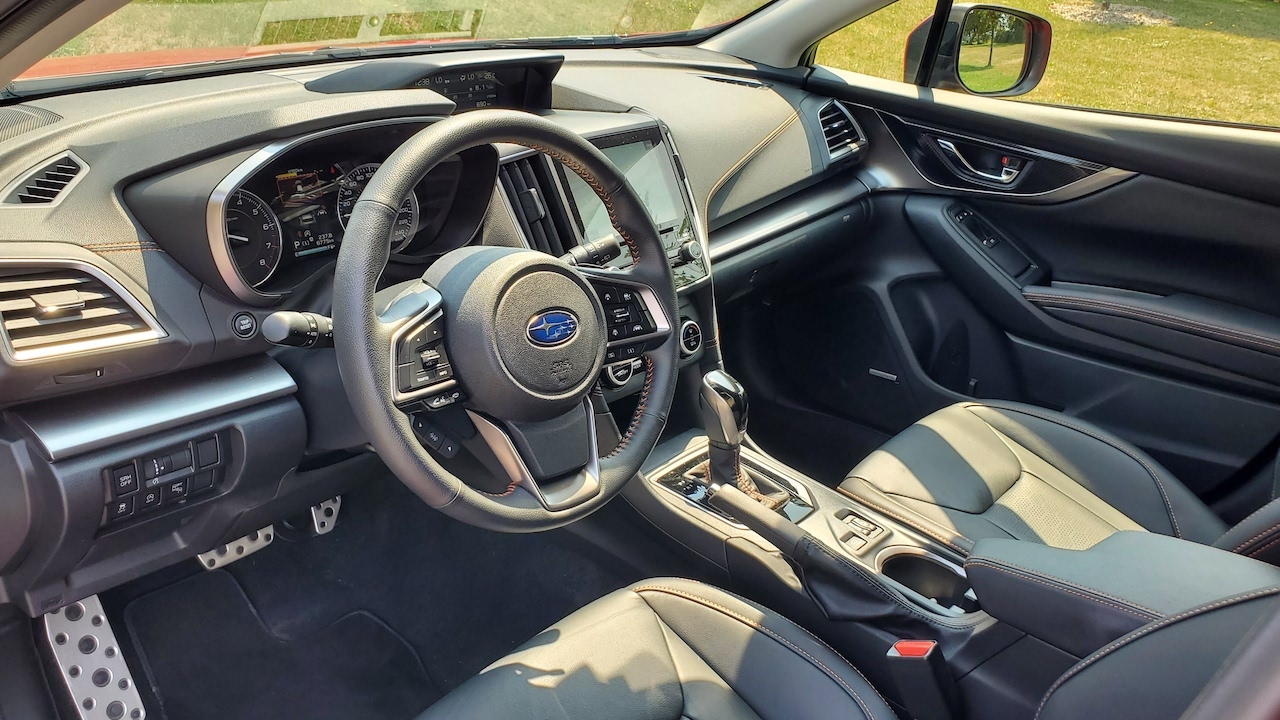 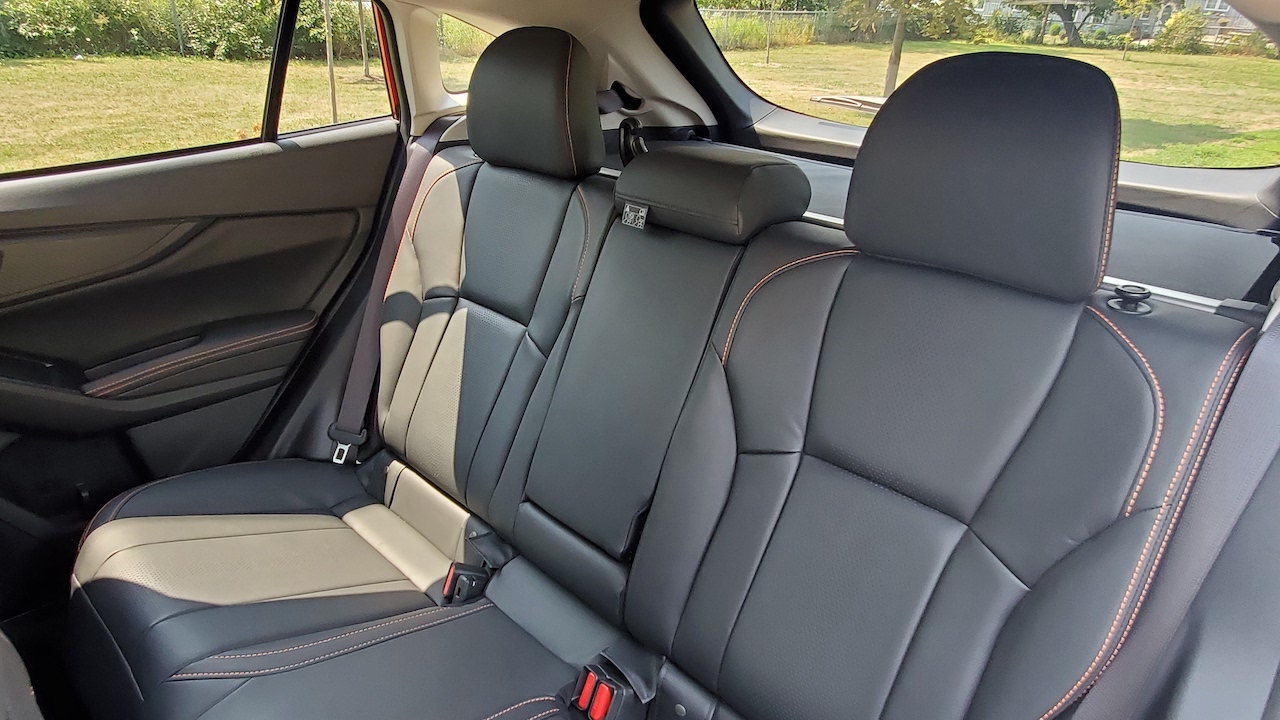 I didn’t perform any exercises to test EyeSight specifically, but I received a few audible warnings on some lane changes, and noticed the lane keeping / departure warning system to be fairly accurate and reliable. Lane keeping / departure systems rely heavily on road markings, which vary widely from road to road. My tester, generally, did a good job of keeping the car in the lane when I intentionally moved around to test it, but there were also several instances when it couldn’t pick up road markings and I was able to drift from one lane to another with no warning or corrective action from the system. Bottom line: keep your eyes on the road.

Subaru’s interior game has gone up a few notches in recent years, and the improvements are visible in the Crosstrek. From the leather seating surfaces with orange contrast stitching, to its flush-mounted 8-inch infotainment touchscreen and no-nonsense layout, my test vehicle really knocks it out of the park. While not luxury standard, the Crosstrek’s cabin is handsomely styled and the materials used are pleasing to interact with. The orange stitching accents complement a cabin that features interesting shapes and contours.

To some (myself included), Subaru styling might seem a little too boxy and bland, but it’s beneficial for outward visibility, passenger / cargo space and ease of entry and exit. The Crosstrek checks all boxes and offers a good driving position to boot. And for a small crossover, it feels spacious with plenty of room for both front and rear seat passengers to travel in comfort. Rear seatbacks fold down easily for up to 1,565 litres of available cargo space.

One of the most impressive aspects of the Crosstrek’s interior is the 8-inch infotainment touchscreen that sits in the centre of the dash. Packed with features, such as Apple CarPlay and Android Auto support, along with Subaru’s STARLINK connected services, the unit is responsive, easy to use and offers impressive map rendering. Hard key short cuts below the screen and separate volume and tune knob make it one of the most user-friendly systems I’ve ever experienced. 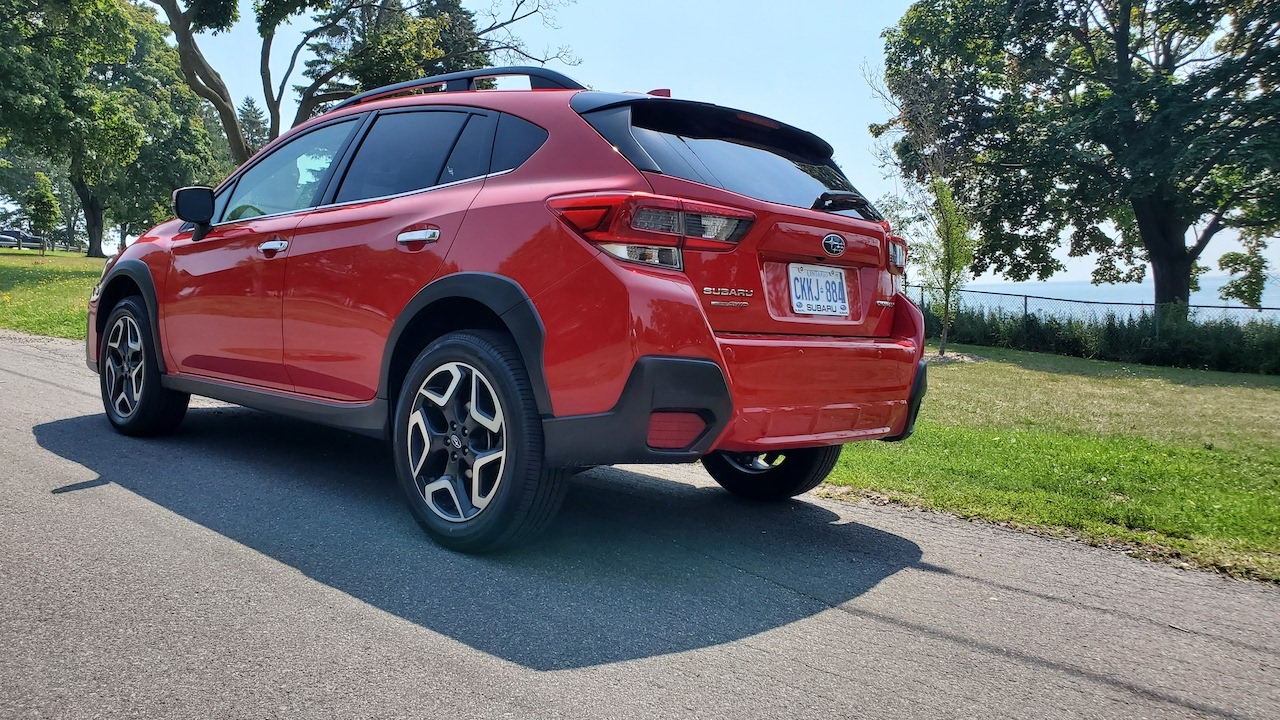 The 8-incher is standard on Sport and Limited models, but only the Limited comes with embedded navigation. Apple CarPlay and Android Auto integration is standard on all trims, however, including those equipped with a 6.5-inch display, to fill the navigation void.

The Subaru Crosstrek won’t set your pulse racing, but it checks a lot of boxes that matter to consumers. Stylish enough, capable, loaded with safety tech and priced within the reach of most consumers. And for those wanting more power, Subaru is making the 2.5-litre flat four (182 hp / 176 lb-ft) found in the Legacy sedan available in the 2021 Crosstrek, albeit for Outdoor and Limited trims only. 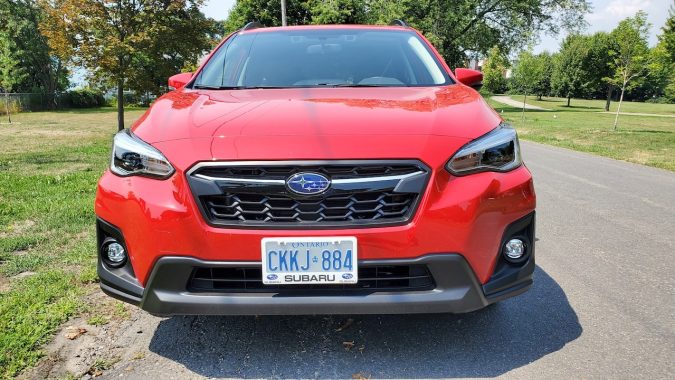 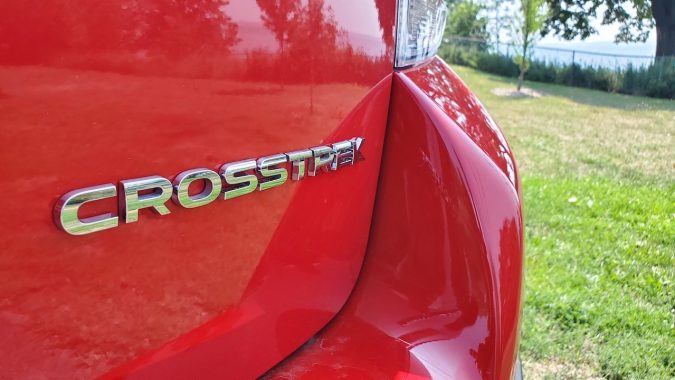